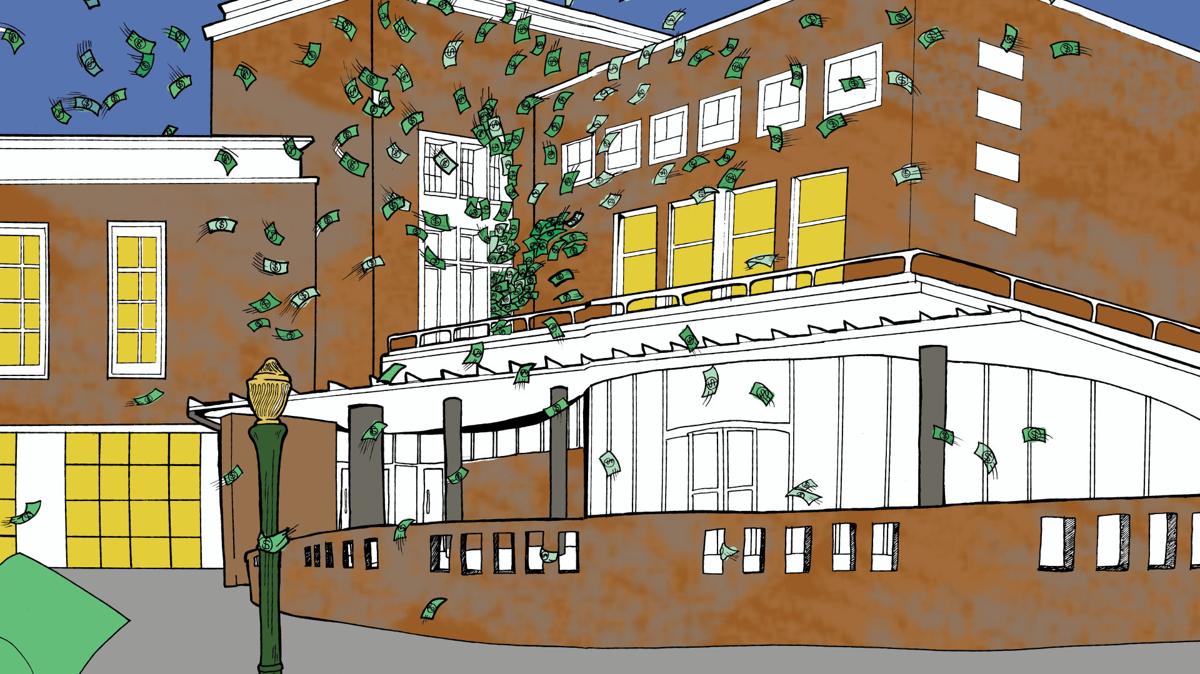 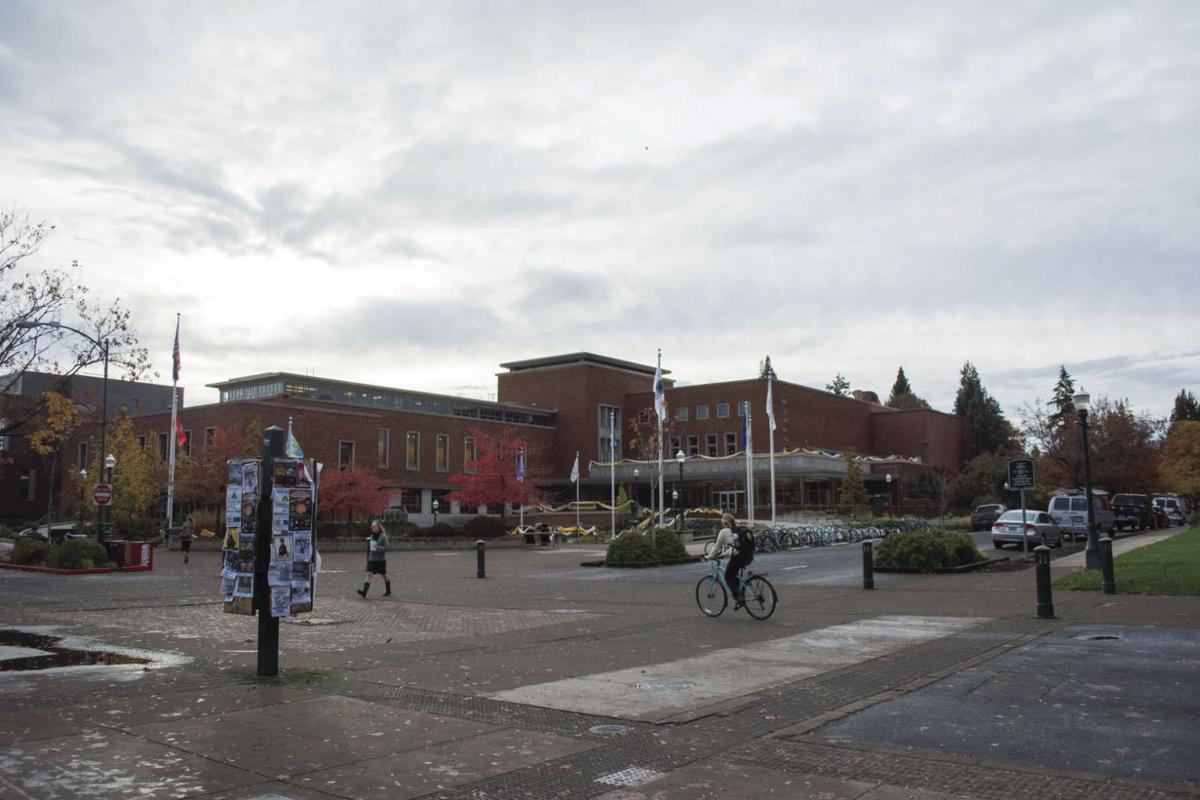 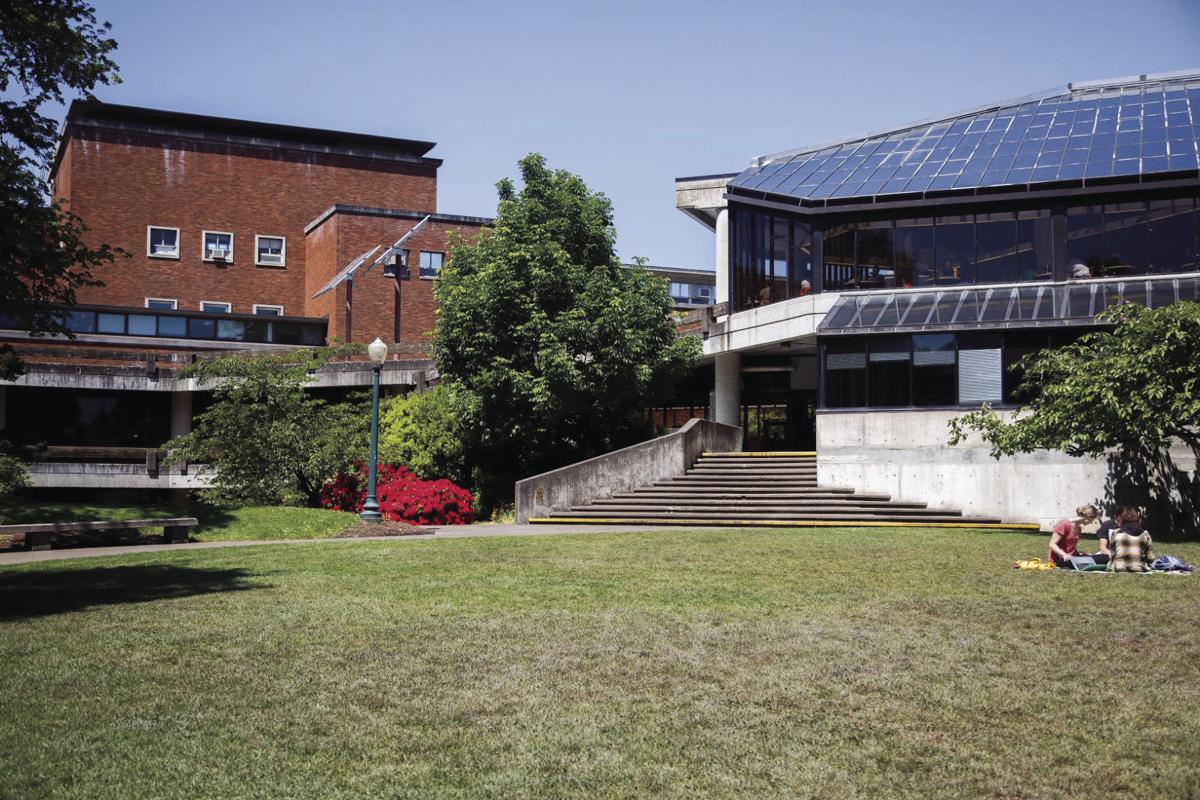 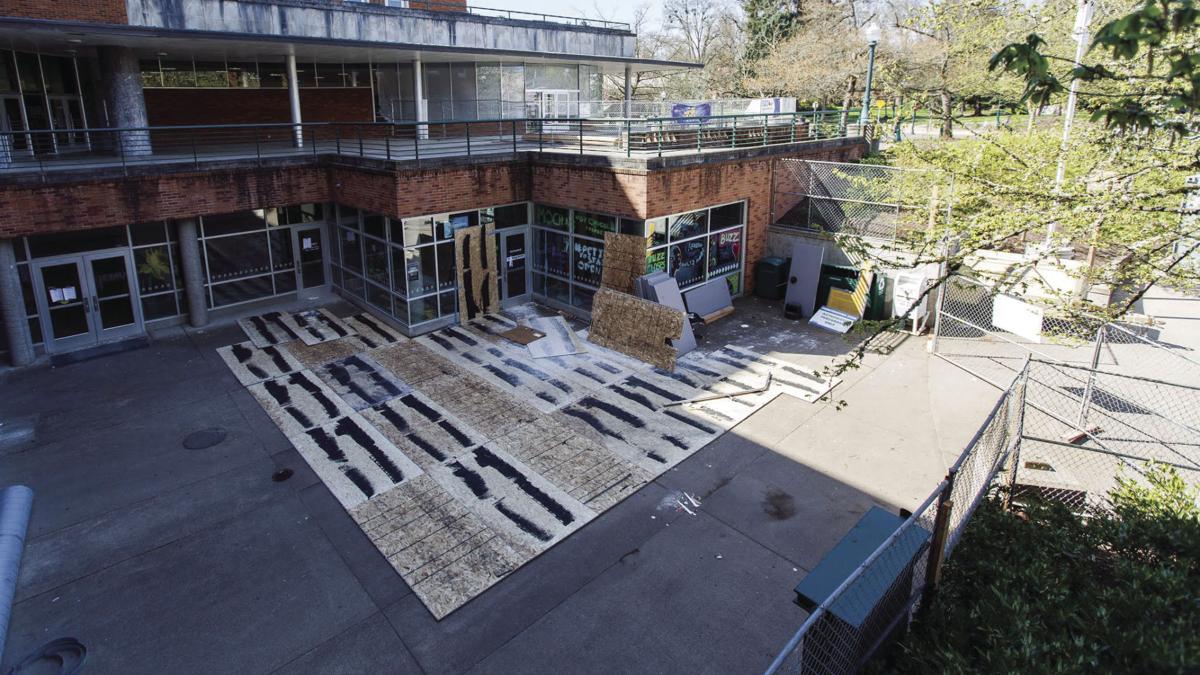 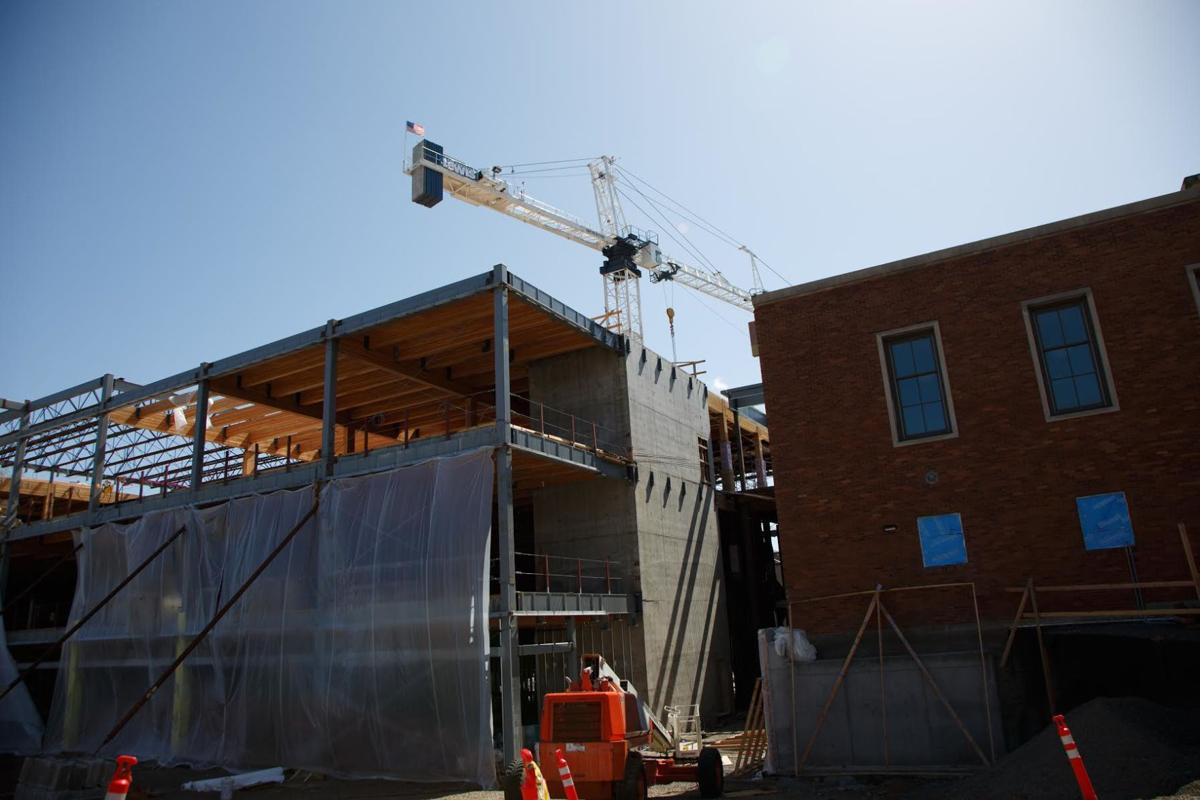 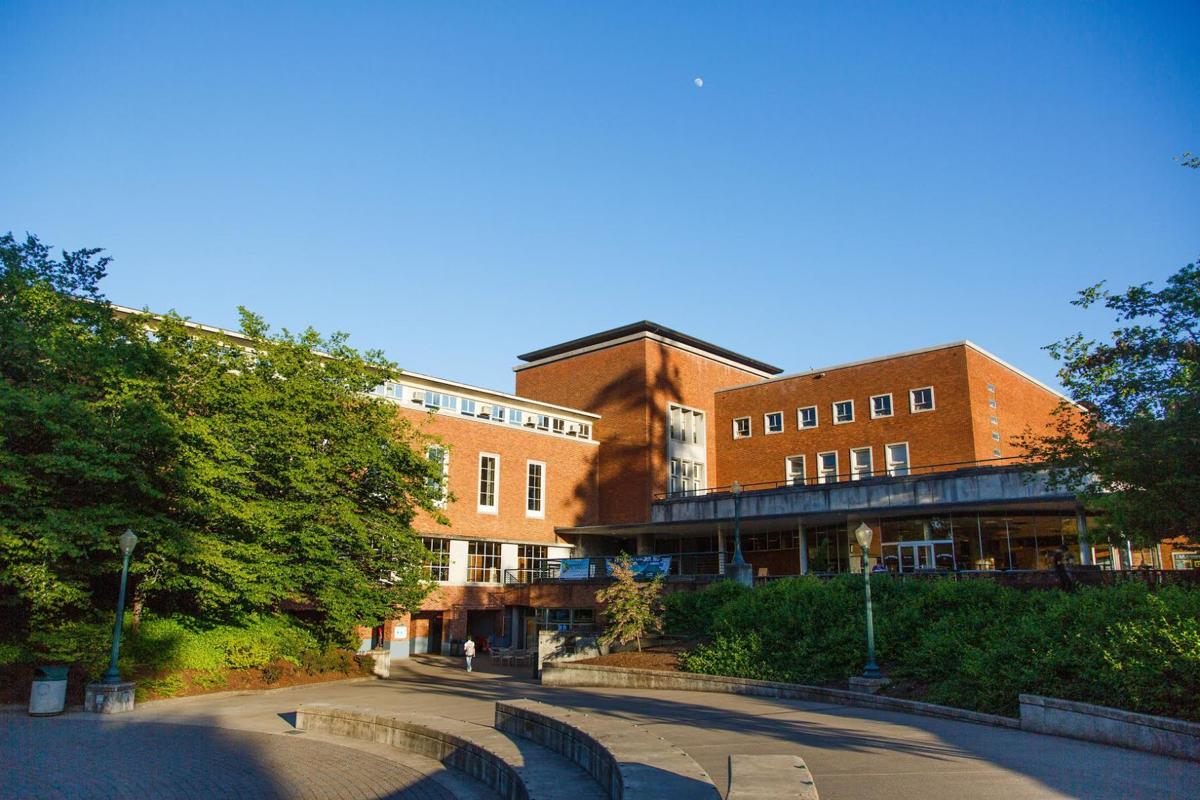 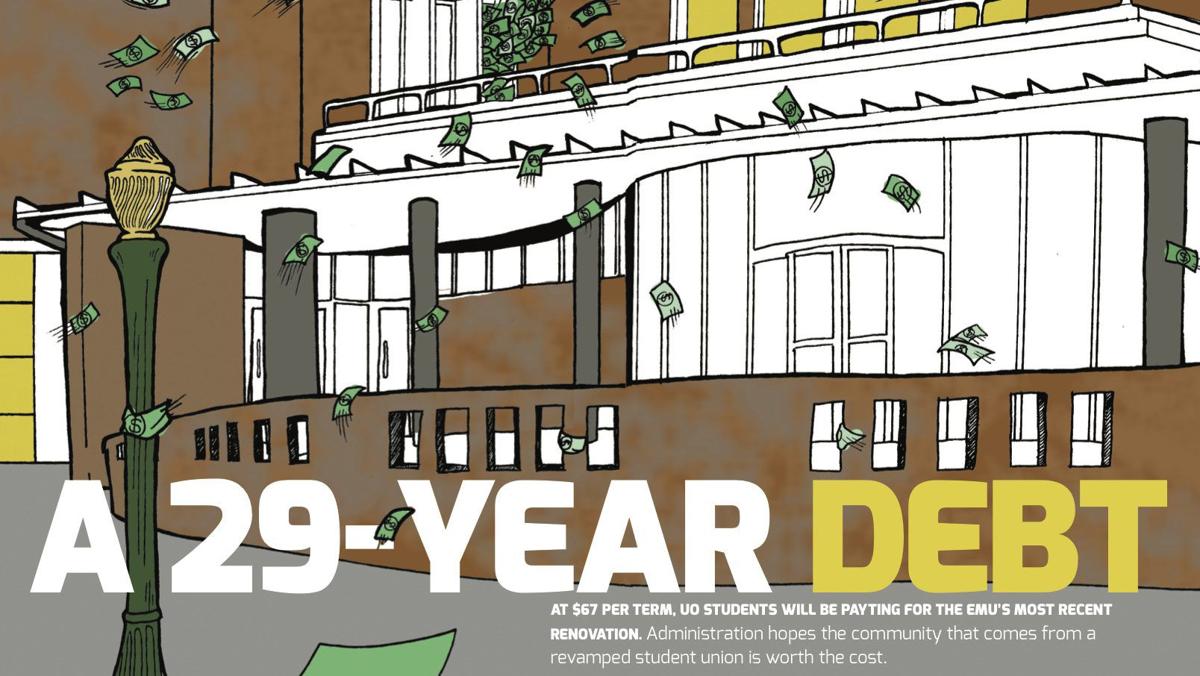 University of Oregon students who haven’t been born yet will continue to bear the cost of a $98 million EMU renovation project.

Students will pay an extra $67 per term until 2043 to cover the cost of the improvements made to the EMU, according to project leaders.

“One of the most important things on a college campus is building community and having a laboratory for students to practice all the things they learn in the classroom,” Laurie Woodward, EMU director, said. “That’s what student unions are and what they do.”

In 2009, planners began a five year process to conceptualize what the final project would look like. During the renovation, student groups temporarily relocated to other facilities in late 2013, and construction began in January 2014.

The new EMU has many additions and amenities the former building lacked: a prayer room, local restaurants and more meeting spaces for student groups to name a few.

Gregg Lobisser, the retired assistant vice president for Capital Projects Division of Student Life and the lead on the project, started designing the new building in 2009. Lobisser was also the lead on the Student Rec Center renovation, and his original plan was to renovate both buildings at the same time.

“It’s very difficult to do two projects at once — two major projects,” said Lobisser. “What we didn’t want was to move one forward and then have the other one lag and students feel like, ‘Well, we already did one. We’re not going to do another one.’ ”

Former UO President Michael Gottfredson approved plans for both renovations, and the projects went to a student vote in 2011. The Rec Center was approved, but the EMU was not. A second EMU vote failed in the spring of 2012. The first two referendums asked for a $100 increase in student fees per term to pay for the project.

Students approved a significantly changed final referendum in November of that year. Administrators had cut aspects of the project — including a 1,200-seat concert hall in the east wing — to minimize costs.

The final referendum included a student fee of “no more than $69 per term,” which was eventually finalized as $67 by the president.

“One of the challenges with a referendum is that it requires legacy leadership,” Lobisser said.

“It means that if I vote ‘yes,’ I’m voting for the people who come after me, not for myself. Am I willing to pay more for them when I’m going to graduate before the thing opens?”

In 1947, UO students approved a $5-per-term fee to pay for the construction of the original building. That is equivalent to $54.12 per term today.

Although the building was expanded in the ‘70s, increasing space requirements and an estimated $12 million in essential repairs led administration to suggest an overhaul.

Laurie Woodward wasn’t working at the EMU during the planning stages. By the time she came on board in April 2013 the wheels were already in motion.

Giving students everything they wanted without increasing the budget was a challenge, Woodward said. She said that her first job was to address the fact that despite being told to “dream big,” there was a limit to what they could afford.

Students have been left with the majority of the bill for their new student union. Over 90 percent of the costs for the renovation will be paid by students, including the new $67 fee and student building fees that were already in place.

But students aren’t paying the entire sum. Additional sources, such as the computing center, the health center and EMU reserves, helped increase the budget from $95 million to $98 million. Campus operations contributed to fund the ramps and stairs along 13th Avenue.

“This project, unlike every project that I’d been on, added, added, added, within our budget as we found money,” Lobisser said. “We were able to do things like the ballroom renovation.”

Part of the original budget accounted for $5 million in donations, but only $3.2 million has been raised. UO continues to reach out to donors.

Even supplemented by outside funding, some students believe that the financial burden of the renovation falls too heavily on the student body.

“I know there are lots of students who are going to use this building, and they’re happy. But from a student leader perspective, it shouldn’t have been so much on the backs of students,” said ASUO Senate President Max Burns.

Dave Petrone, former UO Board of Trustees member, donated $1 million to update the Fishbowl, what he says is one of the most iconic features of the EMU.

“The Fishbowl is classic,” Petrone said. “It’s a little hard to explain, it just touches you. Everyone that goes there knows the Fishbowl.”

Working to create a community space for students, Lobisser organized focus groups with every organization in the EMU to make sure each group got what they needed. The Innovation Center and the expanded Multicultural Center are some of the additions that came from those meetings.

“It becomes symbolic of the inclusiveness of campus that when you do a renovation like this, you are able to take the needs of students into mind that maybe were not part of the original thinking,” said UO spokesman Tobin Klinger, referring to the prayer rooms that were added in order to accommodate the larger international student body.

The EMU had its grand opening on Oct. 6, 2016. After 37 years working at the university, Gregg Lobisser retired the same day.

“I think this is the most important building on campus,” Lobisser said. “People who visit see the culture of UO in these halls.”

You can find a full breakdown of the EMU renovation budget here.