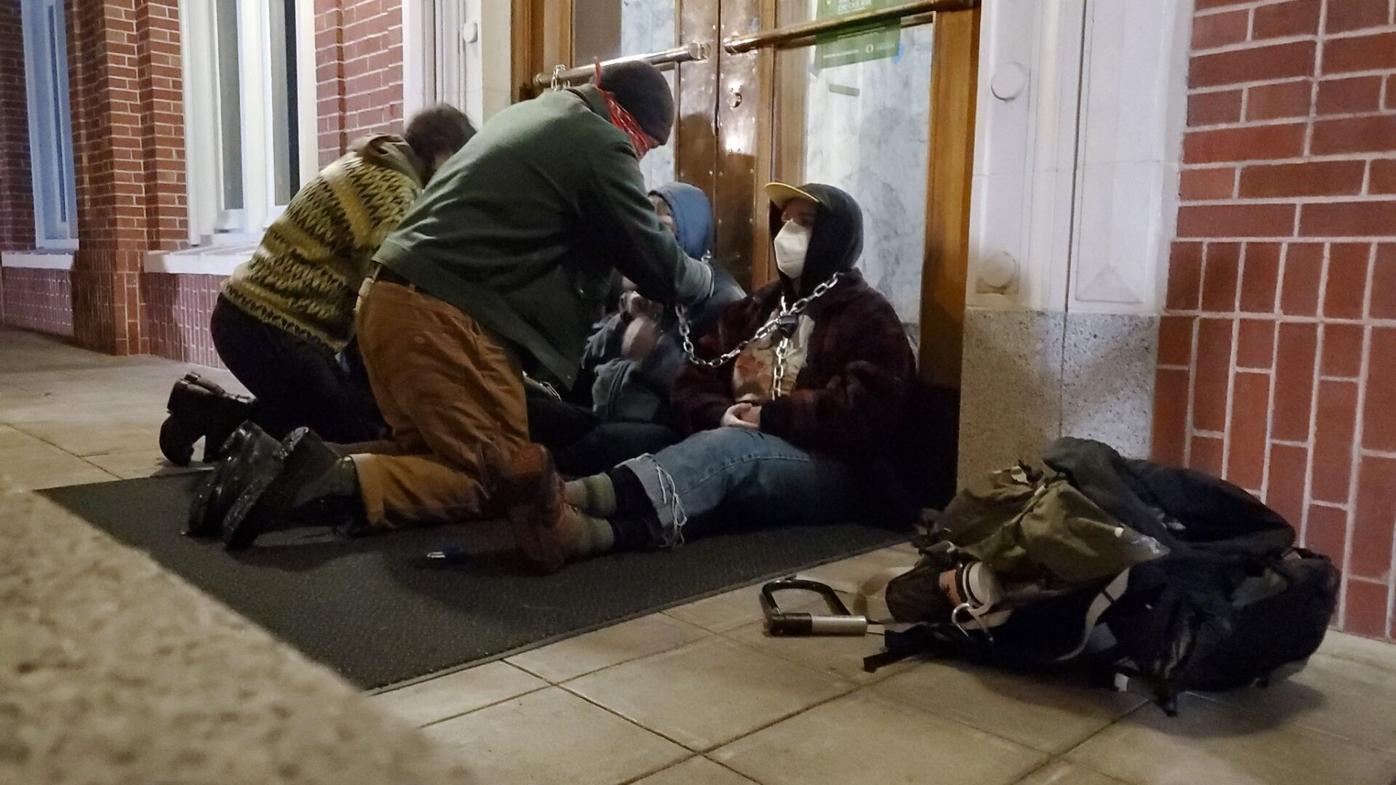 Three activists chained themselves to the door of Johnson Hall Sunday night. They demand that UO disband its police force, divest from fossil fuels and democratize the board of trustees. (C. Francis O'Leary/Daily Emerald) 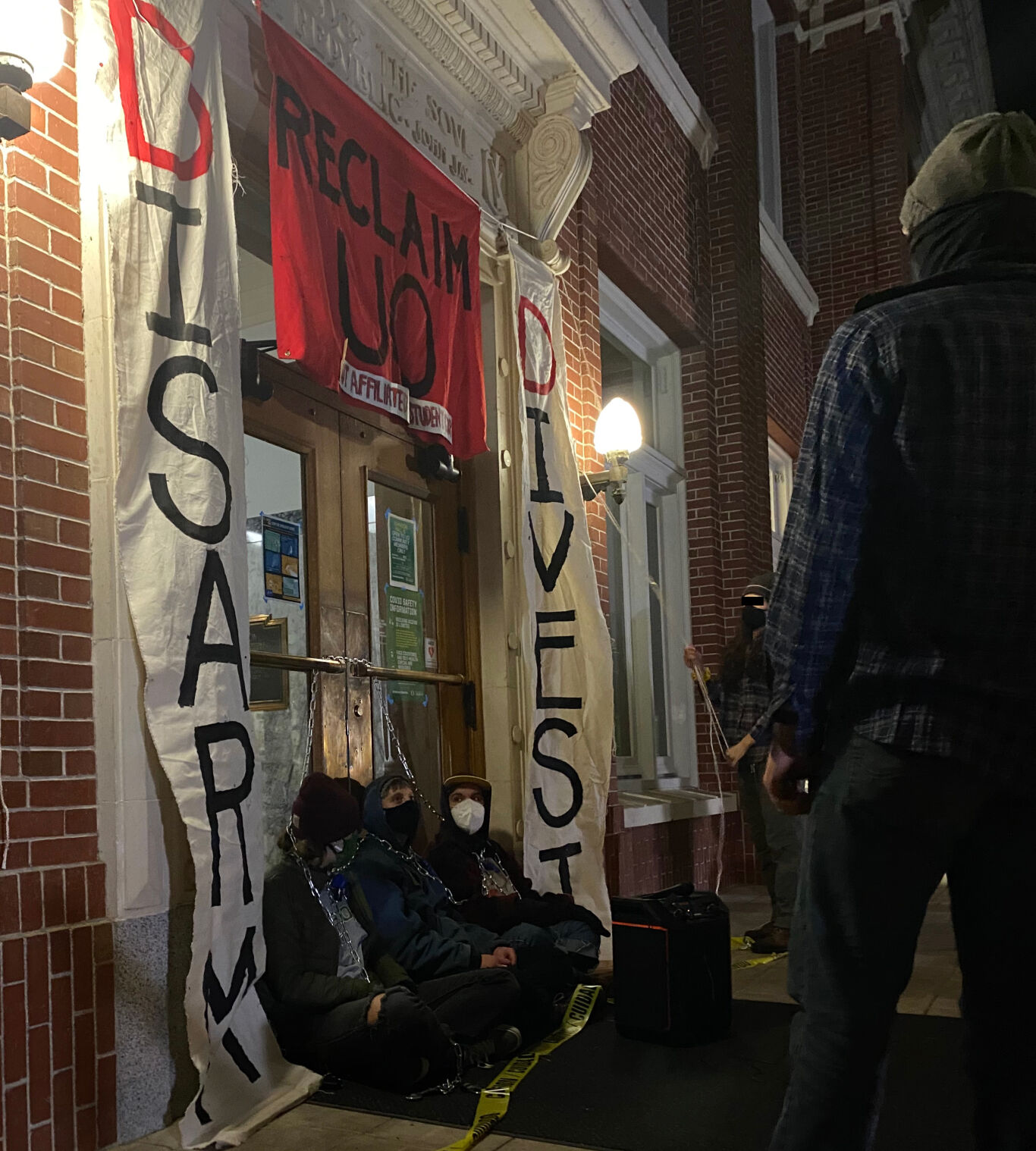 After chaining themselves to the University of Oregon's Johnson Hall on Sunday night, activists unfurled banners on the building reading, "Reclaim UO," "Disarm," "Divest," and "Democratize." (Melanie Henshaw/Emerald) 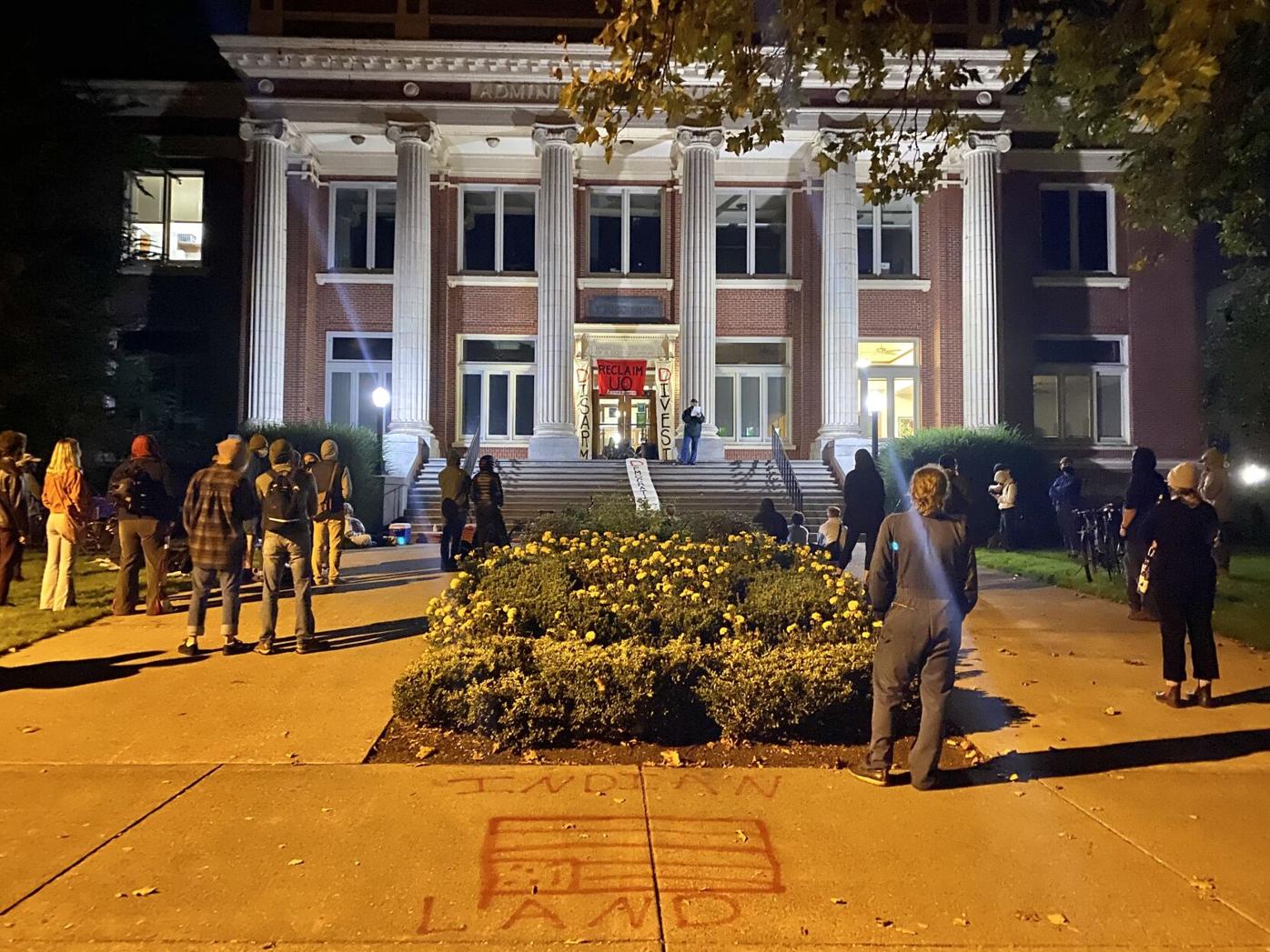 Protesters listen to speeches by protesters outside Johnson Hall where activists chained themselves to the building and unveiled banners Sunday Night. (Melanie Henshaw/Emerald)

Three activists wrapped a chain around their necks and secured themselves to the front doors of Johnson Hall on Sunday night. The activists said their short-term goal is to be granted a meeting with University of Oregon president Michael Schill. In the long term, they call for UO to disarm its police department, divest from fossil fuels and democratize the board of trustees.

Though no one group claimed responsibility for planning the event, it was promoted by Disarm UO, the BIPOC Liberation Collective and Sunrise Eugene.

The occupation protest was preceded by a protest and concert in Washburne Park called the “Back to Skkkool Bash.” Music began around 7 p.m. and continued until just after 9 p.m.

After the bands performed, an organizer from “a BIPOC-led direct action group in Eugene” spoke to the crowd. We are all here today because standing up for Black lives wasn’t just a trendy summer thing to do,” they said. “You have to do it every day,”

The speaker listed their grievances with UO to the crowd, who called out, “Fuck the police!” “Fuck UOPD!” and “Fuck UO!” during pauses in the speech. Topics ranged from alleged racial profiling by UOPD to UO’s relationship with Nike and Phil Knight.

Related: “Disarm, disband or do nothing: Where does UOPD stand?”

After the speech concluded, the crowd mobilized to march on the university campus.

Around 9:45 p.m., a group of around 50 people approached Johnson Hall while chanting “Black lives matter” and “Disarm, divest, democratize UO.” Three people approached the threshold of Johnson Hall, which houses Schill and other administrators’ offices. The activists pulled out a chain and began wrapping it around their necks. Others helped fix the chain with padlocks and secured the trio to the building’s front doorway.

After being affixed to the building, one of the protesters spoke into a microphone about the group’s demands: that UO “divest from fossil fuels and transition to renewable energy, disarm UOPD as a first step to disbanding the entire institution and to democratize the board of trustees to create a university accountable to students, staff, faculty and the surrounding community.”

The speaker also said that as a White ally to the cause of racial justice, it was important that she put her own body on the line.

Meanwhile, other protesters laid out over a dozen pizzas for people to share. Someone set up tables to distribute posters, stickers and zines about topics ranging from steps toward police abolition, building community resiliency and starting and operating a mutual aid group. One individual spray painted an image of an upside-down American flag, with the words “Indian land” on the sidewalk in front of the building.

Student activists representing a range of organizations delivered several speeches. Patrick Schranck, a representative from Reclaim UO, told the crowd that, though it may seem the university has all the power, activists can bring the administration to the negotiation table through consistent action.

One consistent theme was a resistance to those claiming leadership roles and dividing the movement for social justice into discrete interest groups. In an interview with the Emerald, one of the activists chained to Johnson Hall called for “reciprocal solidarity.”

“Our causes don’t exist in a vacuum. All of these things are intertied,” she said. “In order to liberate everyone, we have to all work together.”

Related: “Students rally for awareness of divestment of fossil fuels”

In response to the occupation, the university released a statement that, while it doesn’t endorse damage to school property, it believes in the right of peaceful protest. “University officials have reached out to the individuals involved to better understand what they are asking for and what they hope to achieve. We will continue to monitor the situation,” the statement read.

Around 11 p.m., activists began playing music from a loudspeaker, beginning with The Coup’s “Guillotine,” and an impromptu dance party began. Organizers also invited those assembled to get sleeping equipment and remain overnight on the Johnson Hall lawn in solidarity.

When asked how they expected the university to react, the activist chained to Johnson Hall said, “I hope they’re mad. They hate to see dissent.”

Activists in support of the occupation rallied at Johnson Hall at noon on Monday.

Editor’s note: This is a developing story and will be updated as events unfold.

Melanie is the video desk producer and she loves to eat, write and think about food.