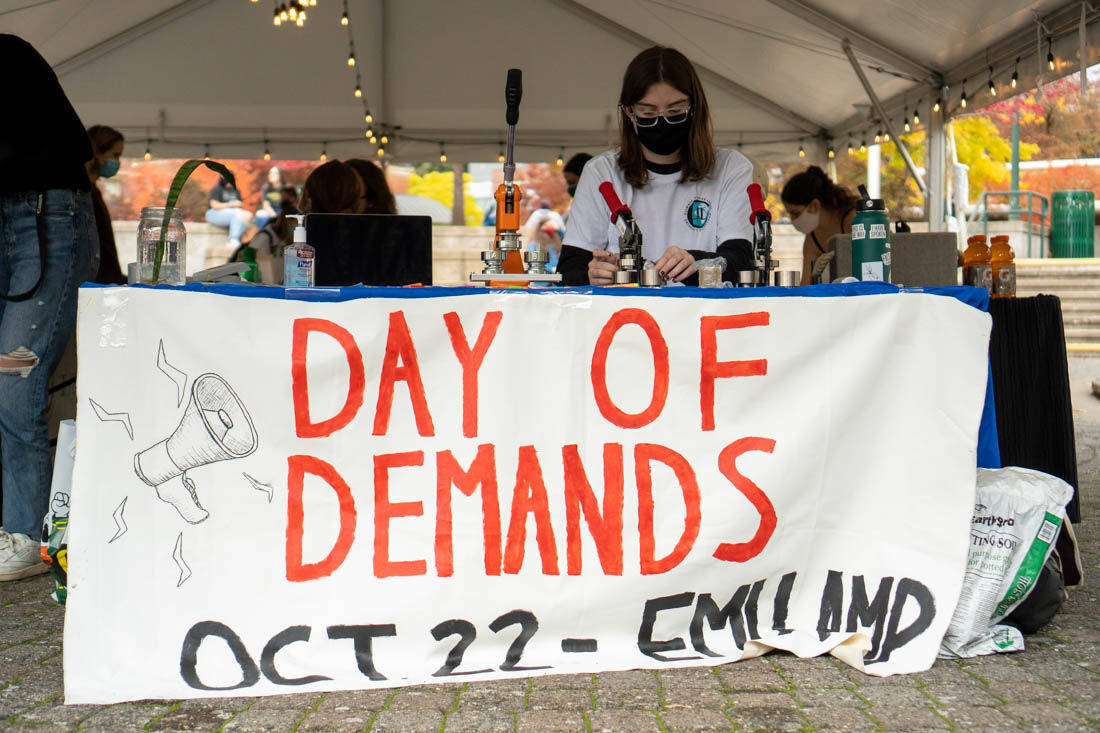 Music plays and the voices of students fills the different club booths. The Day of Demands is a chance where students and faculy can present their collective demands from the University of Oregon. (Ali Watson/Emerald) 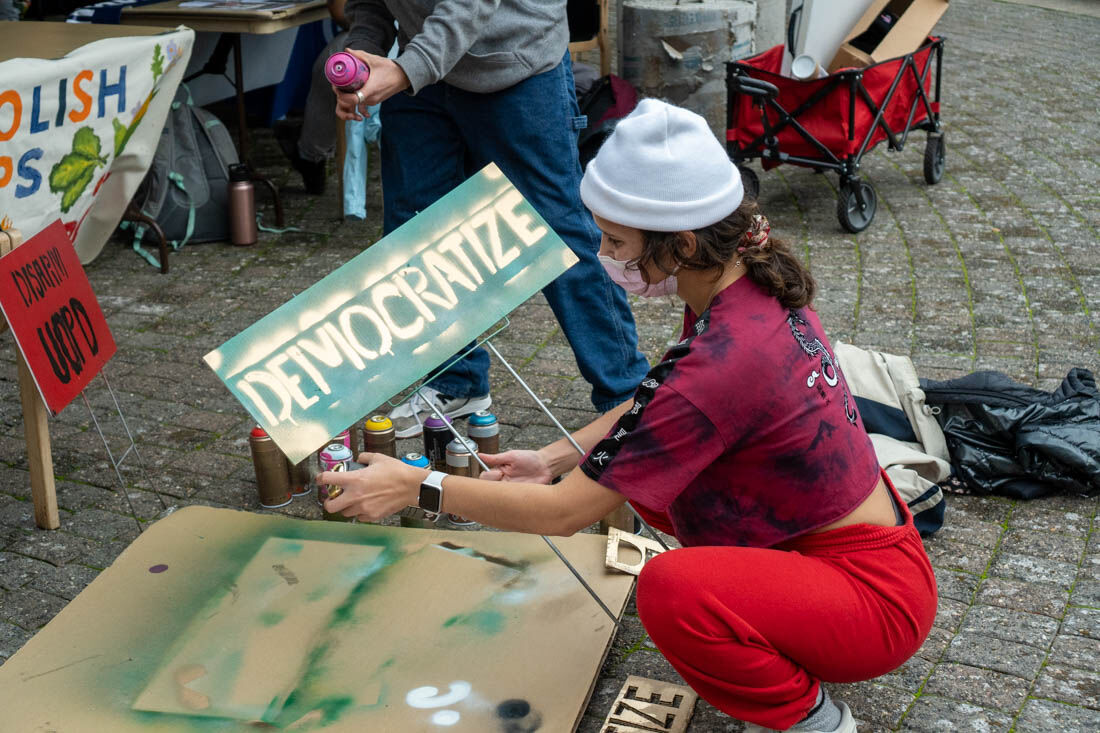 The sound of spraypaint echoes outside the Erb Memorial Union. The Day of Demands is a chance where students and faculy can present their collective demands from the University of Oregon. (Ali Watson/Emerald) 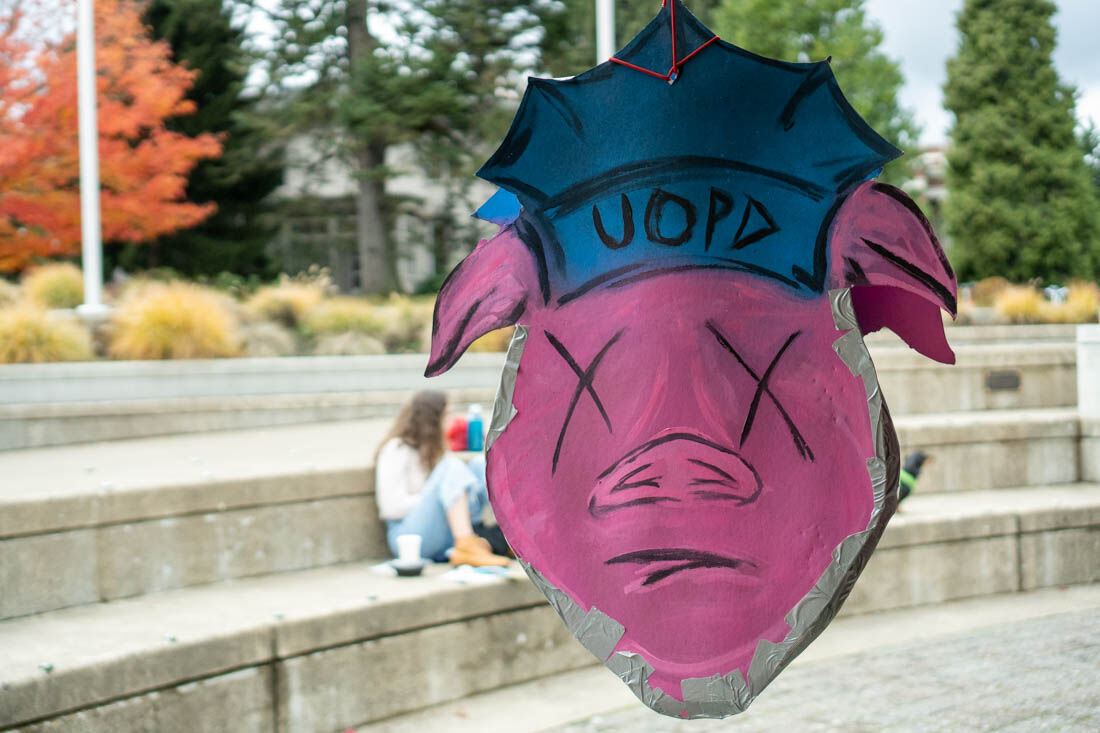 Several signs hang from the tents that house the Day of Demands in the Erb Memorial Fishbowl. The Day of Demands is a chance where students and faculy can present their collective demands from the University of Oregon. (Ali Watson/Emerald)

A group of University of Oregon activist organizations held a “Day of Demands” event on Oct. 22 in the Erb Memorial Union amphitheater. Each organization had demands directed at UO administration and/or board of trustees.

All of the organizations had informational tables set up under a tent. Some groups also had representatives give speeches throughout the day.

Among the speakers were representatives from Climate Justice League with its “Fossil Free UO” campaign, Disarm UO, The Student Insurgent, Eugene Community Fridge and Young Democratic Socialists of America with its campaign titled “Democratize UO.”

Fossil Free UO called for information about UO’s investments to be publicly available.

According to state law, the UO Foundation operates as a 501(c)(3) non-profit and is overseen by the board of trustees. Students and other community members have no input or control over the use of funds. The full details of the investments are not available to the public.

Abbey Gravatt, also representing Fossil Free UO, criticized the university for “prioritizing athletics over other departments and environmental actions on campus.” Gravatt said electrifying the boiler systems would cause an 86% reduction in greenhouse gas emissions and would cost the same as the construction of Hayward Field.

At the event, Disarm UO also announced that it is changing its name. It is in the process of joining the Cops Off Campus Coalition, an organization spanning several schools in the University of California school system.

The Democratize UO campaign wants the board of trustees to consist of elected officials rather than the current system where the governor appoints the members.

“It is an open secret that the board and president of UO will whisper into the governor’s ear and tell them who they want appointed to the board,” Patrick Schranck, a UO student representing Democratize UO, said.

UO Matters, a news and opinion blog, published an email that indicated UO President Michael Schill was pitching candidates to Oregon Gov. Kate Brown at a women’s basketball game. The veracity of this email is not confirmed, but supports Schranck’s claim.

Kay Jarvis, UO director of public affairs and issues management, declined to comment on the nature of the demands made by the various organizations.

“As of today, the attached demands have not been formally presented to the university. We encourage dialogue on student interests and concerns and are always open to meeting with students,” Jarvis said.

The attached demands consisted of a list of the organizations present as well as a list of quotes from the speakers that either made demands or accusations toward the UO administration.