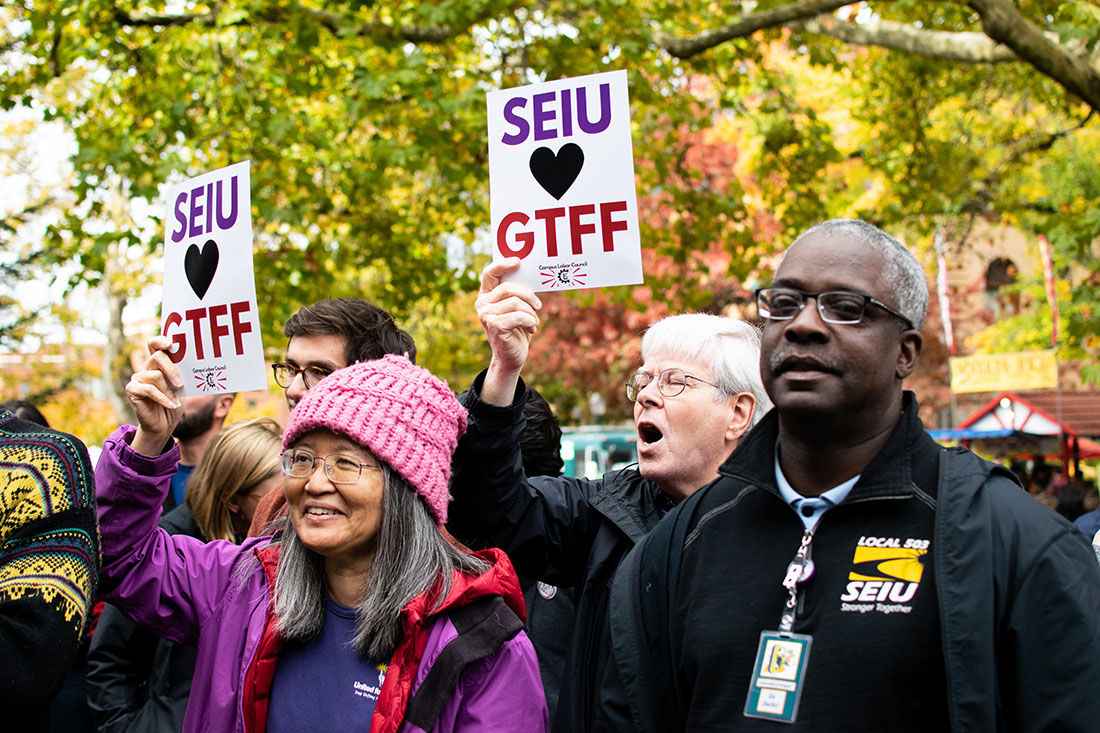 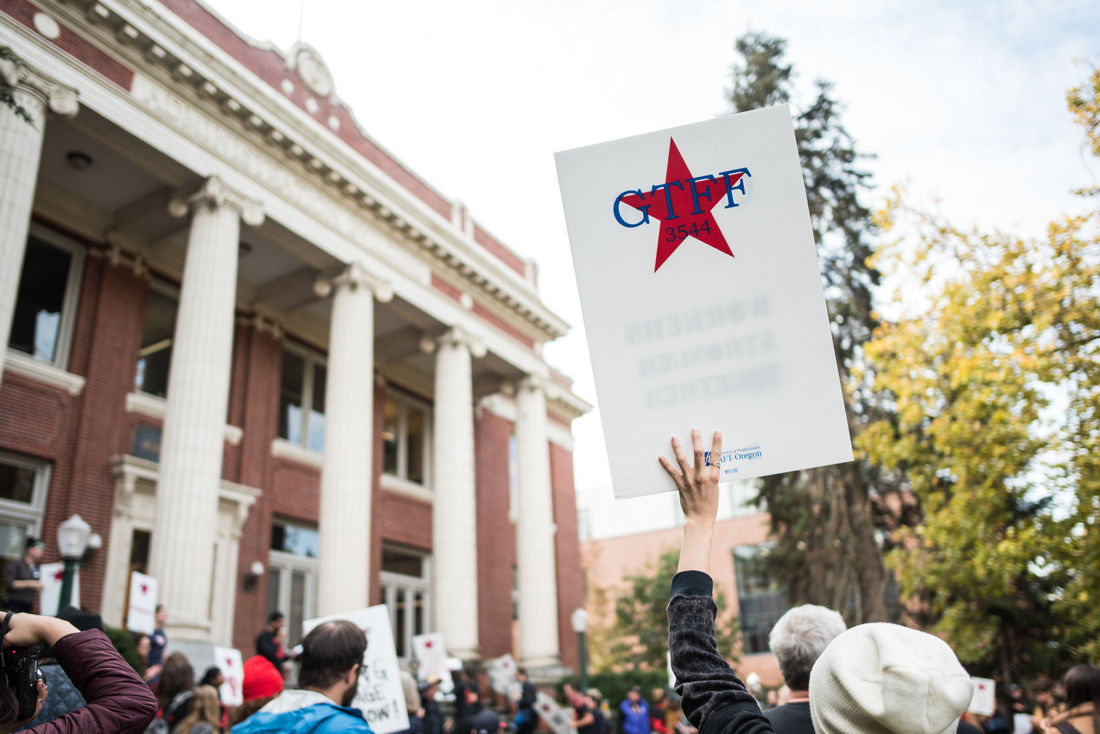 Rachel Hampton, VP of operations at GTFF, uses a sign as her voice. Following the vote to authorize a strike, the Graduate Teaching Fellows Federation holds a rally to demand a fair contract at Johnson Hall on Oct. 18, 2019. (Marissa Willke/Emerald)

This past summer, unions at Kaiser Permanente, Fred Meyer and Oregon’s seven public universities, among other places, have been agitating for better working conditions.

This includes the University of Oregon, which has seen its fair share of labor union activism. At the beginning of the school year, SEIU Local 503 — which represents classified employees at Oregon’s public universities — called for a state-wide strike over wages and cost-of-living adjustments, which was later averted with a contract deal. Just a few weeks ago, in October, the union representing UO’s graduate employees nearly went on its second-ever strike, due to issues like health care.

How can you wrap your head around all these unions? Here’s the Daily Emerald guide to labor unions on campus.

Who they are: The GTFF represents UO’s 1,400-some graduate employees, the graduate students who — in addition to studying — teach classes, research with professors and work in university administration. GEs account for about 40% of UO’s 3,600 graduate students, according to data from the UO Institutional Research website.

What they want: Before the union had secured a new contract, GTFF President Ellen Gillooly-Kress told the Emerald that the union and university had mostly been disputing over UO’s contribution to GEs’ health insurance plans and salary offers. “I deeply care about taking care of myself and being able to afford my own health insurance, so I can be there to support everybody in my acting classes,” said Gillooly-Kress, who is also a Ph.D. student studying theatre arts.

When they began negotiating for a contract: On Oct. 29, the union and university reached a tentative deal on a new contract after a 14-hour-long negotiation session. Though one has not been finalized as of publication, the tentative agreement’s terms include a 3% yearly salary increase, a continuation of how UO pays 95% of GEs’ health insurance premium costs and the creation of a new summer GE position.

What they want: After the contract deal, SEIU Local 85 Vice President Stephanie Prentiss told the Emerald in October that the union had fought incredibly hard for its terms. “We're not asking to be rich. Of course, that's not our goal,” Prentiss said. “We are asking [UO] to give us an opportunity to be healthy and do our jobs to the best of our abilities and be able to provide for our families.”

When they began negotiating for a contract: SEIU Local 85, in conjunction with its parent union, settled on a new contract just before the start of the fall 2019 term.

Related: “Closing the deal,” from the Emerald’s coverage of SEIU bargaining

Who they are: UA is the labor union representing about 1,900 teaching and research faculty, which includes tenure-track and non-tenure-track instructors, adjuncts, librarians and postdoctoral scholars. (The UO Human Relations webpage adds that law school faculty and department heads are not in the union).

What they want: In previous bargaining sessions, the union has asked for cost-of-living and salary increases.

Who they are: Officially recognized by UO in 2017, the UO Police Association represents campus’s sworn officers and campus dispatchers, according to the UO Human Resources webpage.

What they want: One issue that’s cropped up among the public is whether to disarm campus police. In May 2018, officers from the Eugene Police Department pointed their guns at a student leaving the Erb Memorial Union who had been told to leave. This led to Oregon Rep. Diego Hernandez (D-Portland) introducing a bill that would disarm campus police at UO and Portland State University. UOPA called this incident a misunderstanding in a March 2019 Register-Guard opinion column that argued against the bill. (The bill died in committee after the 2019 legislative session).

Who they are: This union, a chapter of the larger Teamsters union, represents some workers in UO’s printing and mailing services office, UPS and Sysco Foods, among others. according to Secretary-Treasurer Gene Blackburn. He adds that the majority of those workers who do work with UO are not directly employed by the university and that their contracts work differently.

What they want: “It's just important [for] people to understand what and why and how we do what we do. I mean, we're representing hard-working people,” Blackburn said. “The only opportunity they get to improve that status is when they negotiate their contracts with those employers. I they're not respected or treated fairly, they withhold their labor because that's the equilibrium that they have to push back.”

When they begin negotiating for a contract: Workers who work at different places, such as UPS or Sysco Foods, have separate contracts with their employers and not with UO, Blackburn said.

This story was updated the morning of Nov. 7 to fix minor design errors.