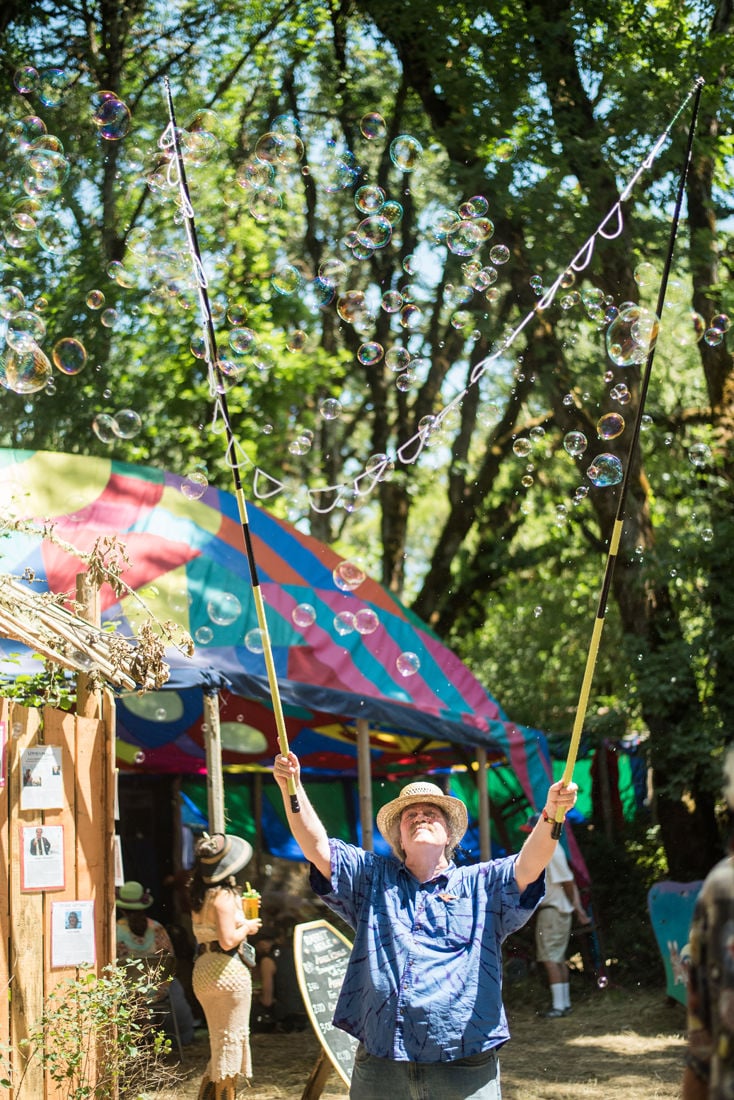 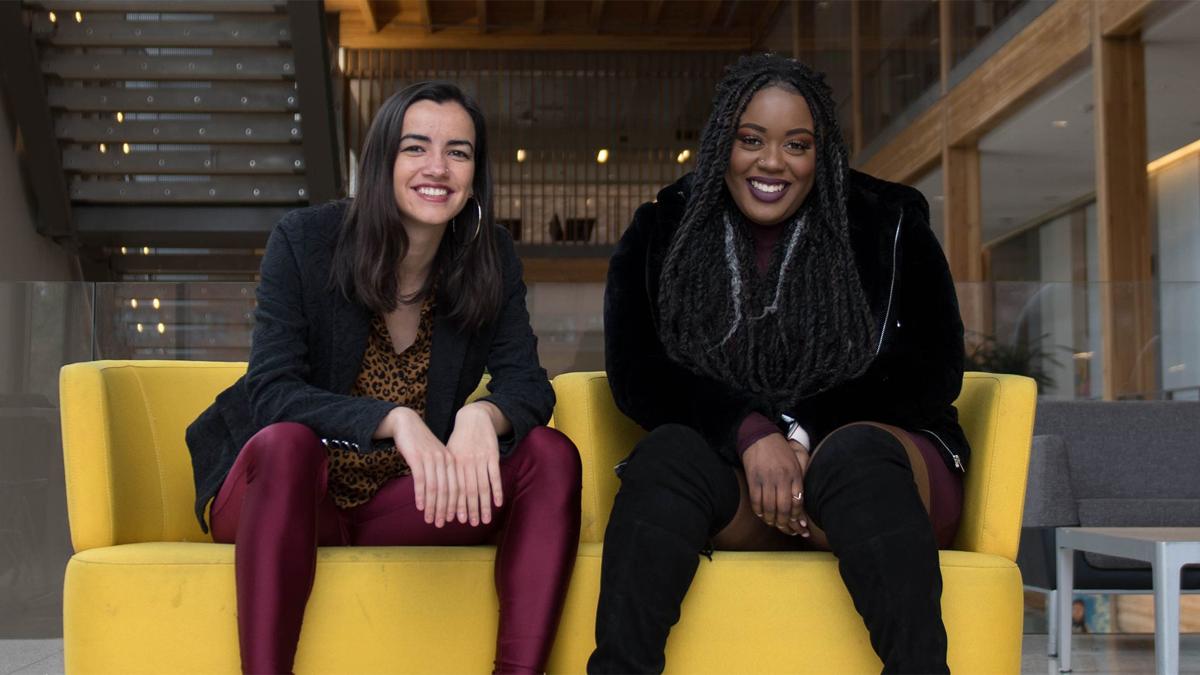 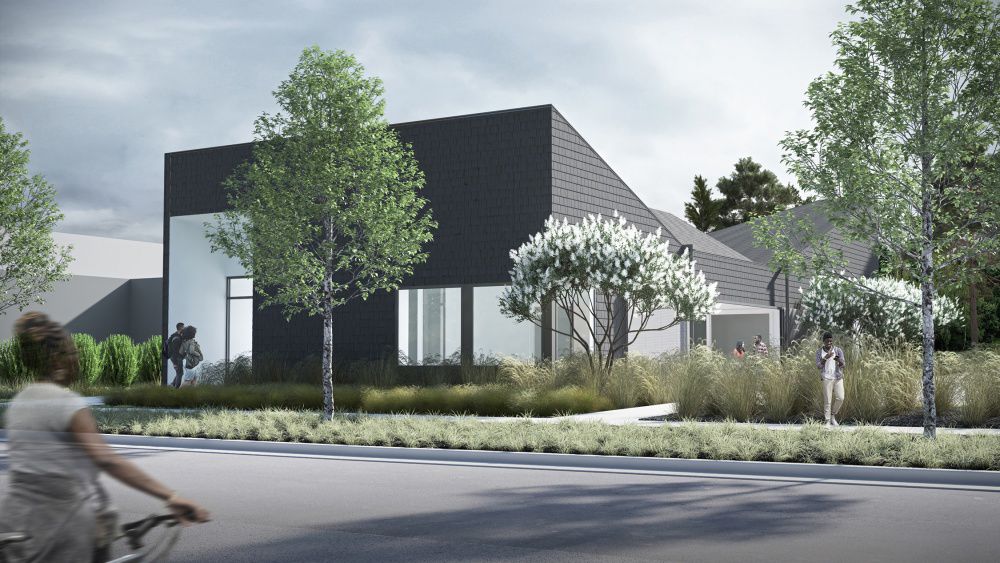 A rendering of the Black Cultural Center 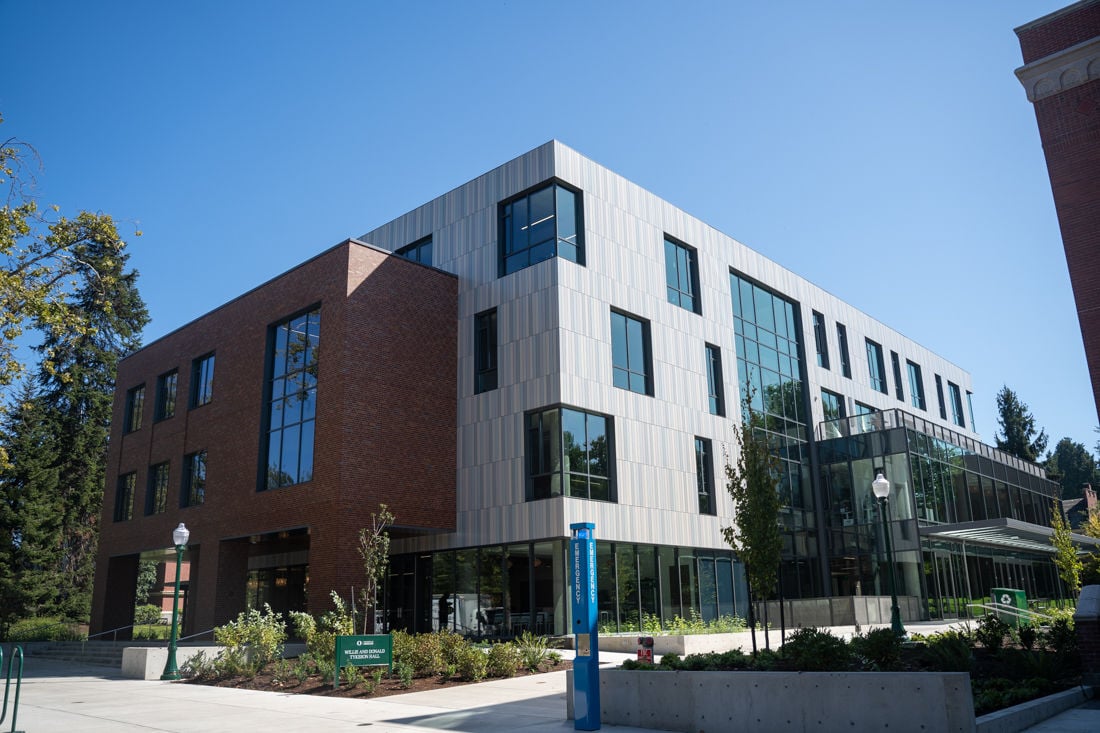 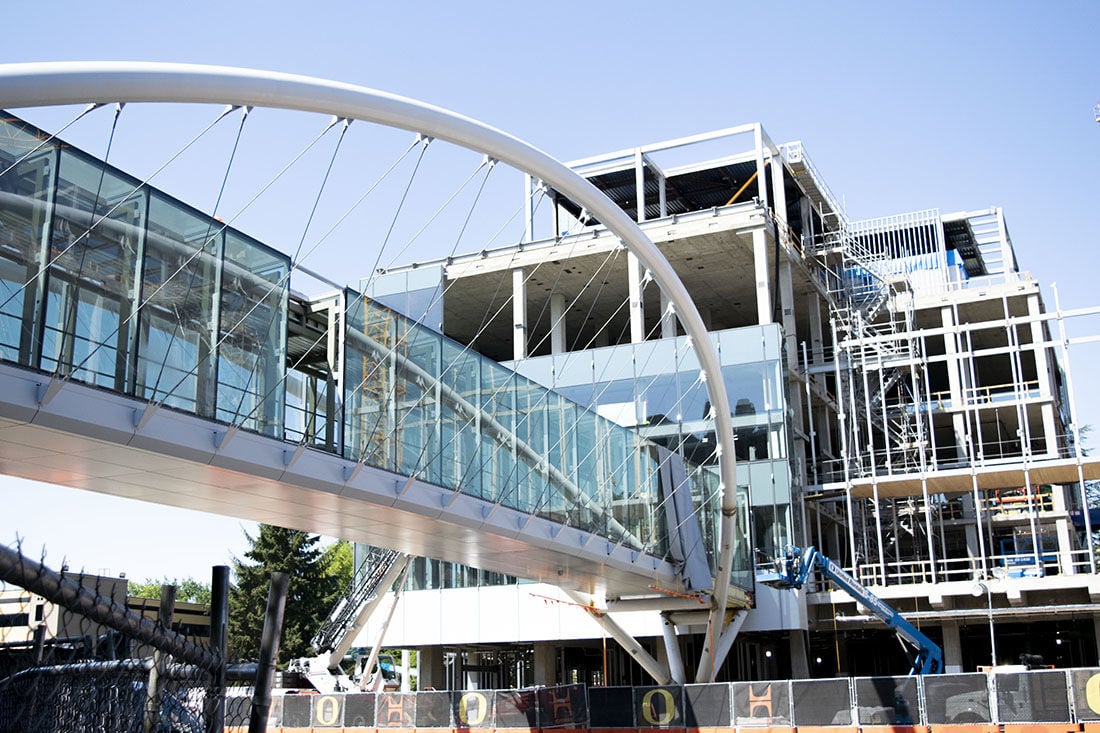 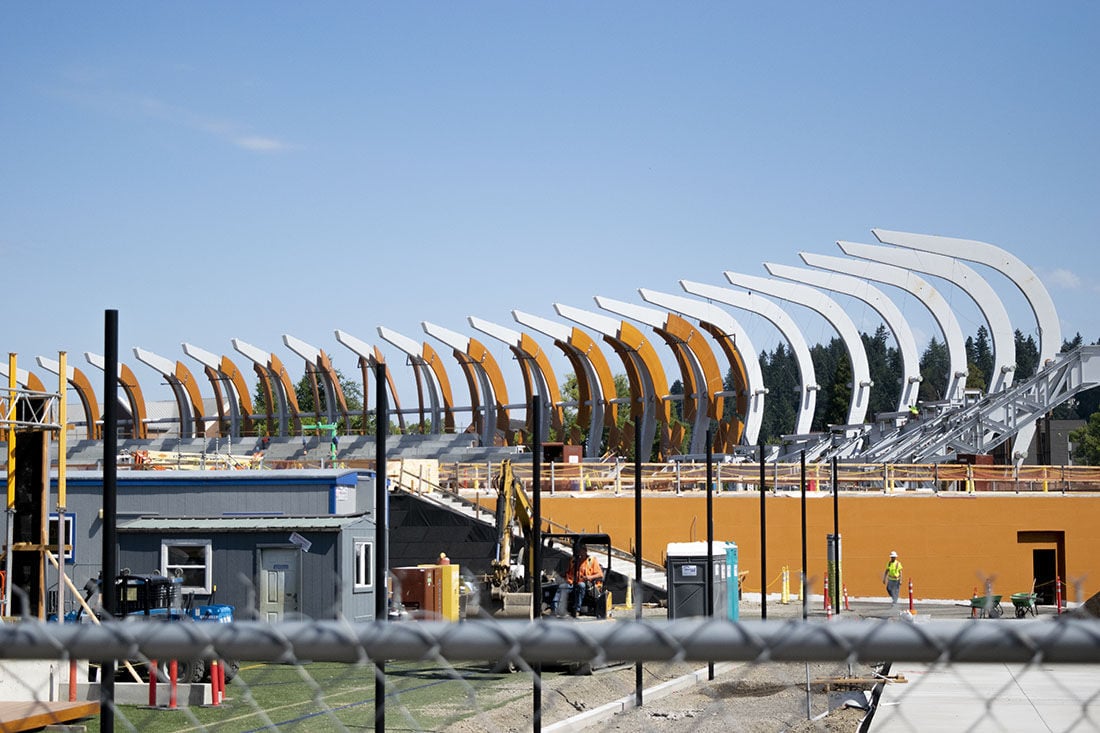 Construction creates Hayward Field with an open-air wood roof to represent the history and culture of Oregon’s forests. (Kimberly Harris/Emerald) 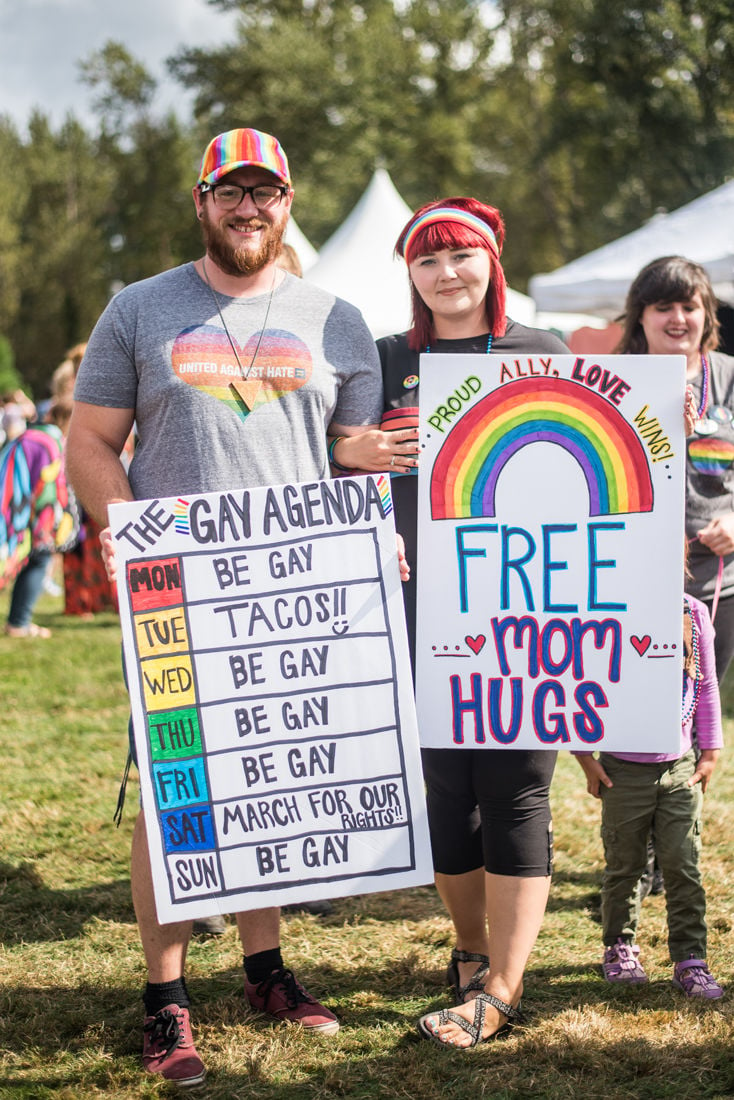 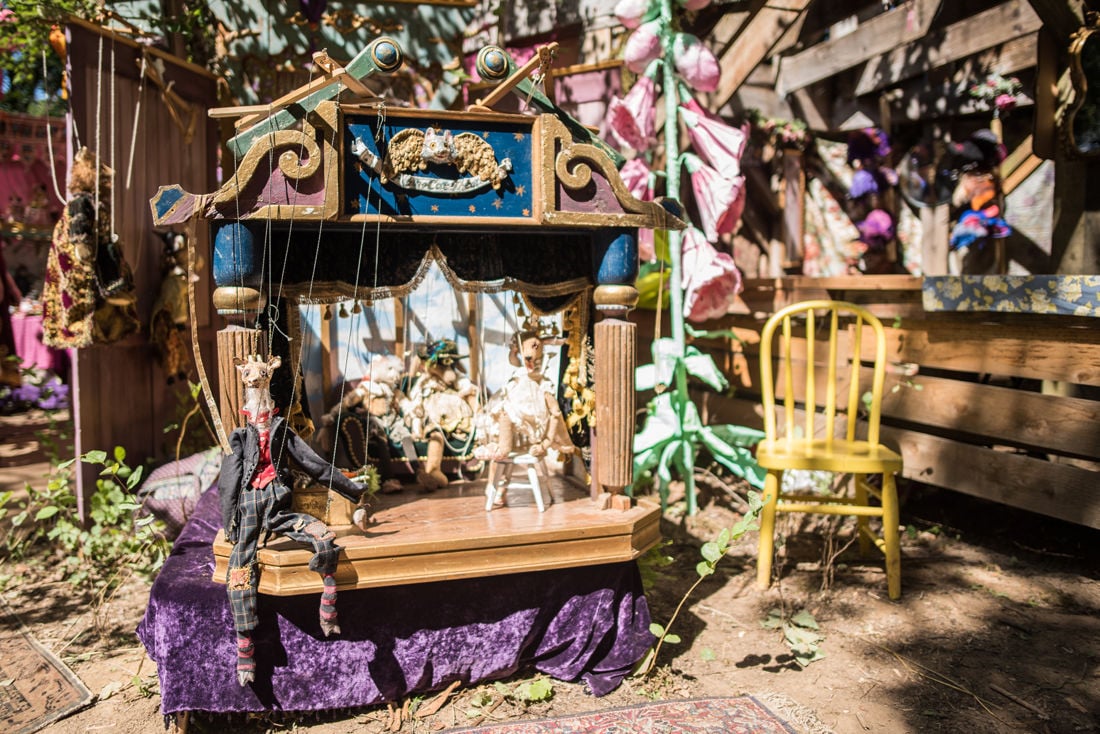 Animal puppets rest on a stage outside of one vendor’s stand. Oregon Country Fair celebrates 50 years of fun on July 13, 2019 in Veneta, Ore. (Marissa Willke/Emerald)

Students who left Eugene in June may not recognize some parts of campus as they trickle back in for the start of a new school year. The new Hayward Field is starting to take shape and the University of Oregon has spread across Franklin Boulevard with the addition of the sky bridge. The UO’s board of trustees named the soon-to-come Black Cultural Center after UO alumna, former advisor and activist Lyllyle Reynolds-Parker.

But so much more happened. Here’s a recap of the most important things that happened this summer:

In the letter, Mendez said she made an “internal mistake” at the beginning of the summer that started the conflict. Mendez’s letter did not specify the nature of her mistake, calling it administrative — but she said Pierre called it a crime and threatened her with “expulsion and legal consequences” that could threaten Mendez’s immigration status.

Mendez said she consulted with ASUO advisors and the code of conduct, and she said there were no consequences to her actions.

Pierre and Mendez did not respond to repeated requests for comment.

The two ran for ASUO executive together on the Ducks Empowered slate. Mendez said Pierre hid her true politics from Mendez. “In retrospect, I can see our politics and values never aligned I was just manipulated by her throughout the campaign,” Mendez said in her letter.

Mendez said she was resigning because she did not run to fight with another student, writing, “I don’t want to spend any more time on what happened here because while this is devastating, student clash (sic) distracts from the bigger problem.”

Naming of the Black Cultural Center — Covered by Ryan Nguyen

After examining 21 nominations and nearly 500 comments, the UO board of trustees unanimously voted to name the Black Cultural Center after UO alumna, former advisor and civil rights activist Lyllye Reynolds-Parker.

Parker, 73, is part of one of the first Black families to move to Eugene, according to BCC naming committee documents, and letters nominating her as the center’s namesake described Parker as “legendary.” In those letters, students from her 17-year career as an advisor in UO’s multicultural academic center wrote about how “Aunt Lyllye” ate lunch with them, held them as they cried and advocated for them.

The center completes another of the 12 demands of the Black Student Task Force, which protested in November 2015 to demonstrate how UO “remains unsafe and unwelcoming for Black students,” as Shaniece Curry, then-external director of UO Black Women of Achievement, explained then.

The board also considered naming the center after Derrick Bell Jr., who became the first Black dean of the UO School of Law in 1980. The 3,200-square-foot center — which will hold spaces for classes, advising and clubs — will open Oct. 12 and is located near E. 15th Avenue and Villard Street, by Global Scholars Hall.

After two years of construction, UO’s college and career advising building, Tykeson Hall, will officially open its doors this fall.

Kay Jarvis, university spokesperson, said the completion of the construction is part of UO’s added focus on student success.

“Tykeson serves as the new hub for academic and career advising, and home to the College of Arts and Sciences, the University Career Center and the Division of Equity and Inclusion,” Jarvis said.

Doneka Scott, associate vice provost for student success, said the building will host 23 newly hired advisors and offer “wrap-around” advising that will be a more holistic approach to helping students.

“Pathway Oregon has been one of our hallmark examples of providing wrap-around services for students,” Scott said. “That’s been basis and were just expanding that with the influx of support and capacity building for our students, so we’re really excited about it.”

Funding for the hall came from a $10 million donation by Willie and Don Tykeson.

UO completed construction of a glass sky bridge suspended across Franklin Boulevard that connects the rest of the university’s science buildings to the Phil and Penny Knight Campus for Accelerating Scientific Impact.

Construction began on the estimated $1 billion campus in March 2018 and is scheduled to open in spring of 2020. The bridge will not be accessible or open to students until 2020.

"Crews continue work on the interior of the bridge. Next spring, the bridge will connect the Lewis Integrative Science Building with the Knight Campus,” Jarvis said.

Robert Guldberg was named the vice president and Robert and Leona DeArmond executive director of the Knight Campus in 2017.

Funding for the Knight Campus comes from a variety of sources, including a $500 million donation from Phil and Penny Knight, as well as $70 million of a requested $100 million in approved state bonds and $10 million from UO alumni Robert and Leona DeArmond, who donated $10 million to endow Guldberg his position in June 2018.

Construction and traffic information will be communicated through AroundtheO and the Knight Campus website.

The stadium is scheduled to complete construction in spring of 2020.

The stadium will hold over 10,000 people and is scheduled to host the 2021 IAAF World Championship.

Funding for the stadium comes from Phil and Penny Knight, as well as more than 50 other donors, according to the facility’s website.

With glitter beards, free hugs signs and rainbow flags galore, the Eugene Pride in the Park festival on Aug. 10 was filled with positive energy.

The motto of the annual event is “come out and be you,” which encapsulates the nature of self-love and expression the festival encourages. The day began with a march through downtown that ended at Alton Baker Park, where the festival began from 11 a.m. - 6 p.m.

Bill Sullivan, the president of Eugene Pride, came onto the main stage as his drag persona, Daphne Storm, to speak to the crowd.

“I’ve been a part of this community off and on for the past 40 years, since 1978. I adore this community, I’ll do anything I can for this community, without hesitation,” he said. “I love all of you for being here today, and I hope we continue this to grow even bigger next year. We got plans for next year, so stick around! I’m not going anywhere yet.”

The park was loaded with food vendors and activities like face painting and bubble blowing. Dozens of booths from different nonprofits and businesses were available with information for passersby, including Planned Parenthood and White Bird Clinic.

Arrests made in murder of LCC student — Covered by Gina Scalpone

Two people were arrested Aug. 29 in connection with the murder of 21-year-old Lane Community College student Alex Oyombe Gradin, Eugene Police said at a press conference the next day.

EPD arrested Regis Derey Kindred, 30, and Kailee Von Foster, 29, a married couple from Portland, on murder charges. Gradin was shot in the University of Oregon-owned parking lot behind Taylor’s Bar and Grill at 1:44 a.m. on May 4.

Police said the motive of the shooting was intentional and gang-related, but emphasized that Gradin had no affiliation with or connection to any gang activity. “He did absolutely nothing wrong,” EPD Detective Jed McGuire said at the press conference.

Both Kindred and Foster pleaded not guilty to the murder charges brought against them by a grand jury. Trial dates have not been set as of publication

Thousands traveled to Veneta, Oregon, to celebrate the 50th anniversary of the Oregon Country Fair. Over 50,000 attended the fair this year — the largest gathering since the 1980s.

Festivities ran throughout the second weekend of July. There were live performances, from acts like Phil Lesh, the bass guitarist of The Grateful Dead to the university student band Laundry, among many others scattered across OCF’s 19 stages. The festival hosted 350 different vendors, each bringing delicious meals, one-of-a-kind artisan crafts, information on alternative technologies and so much more.

For the 50th anniversary, OCF organizers wanted to reciprocate the love and support shown by the dedicated OCF community. They built a platform where various artisans could come and put their creative processes on display by creating their art on stage. The 50th anniversary was organized and designed with immense detail, welcoming veteran guests who had been a part of the festival since its beginning, and newcomers not knowing what to expect.

Gina is an associate news editor for the Daily Emerald. She used to cover crime and courts and loves a public record. Send tips and pictures of puppies: [email protected]