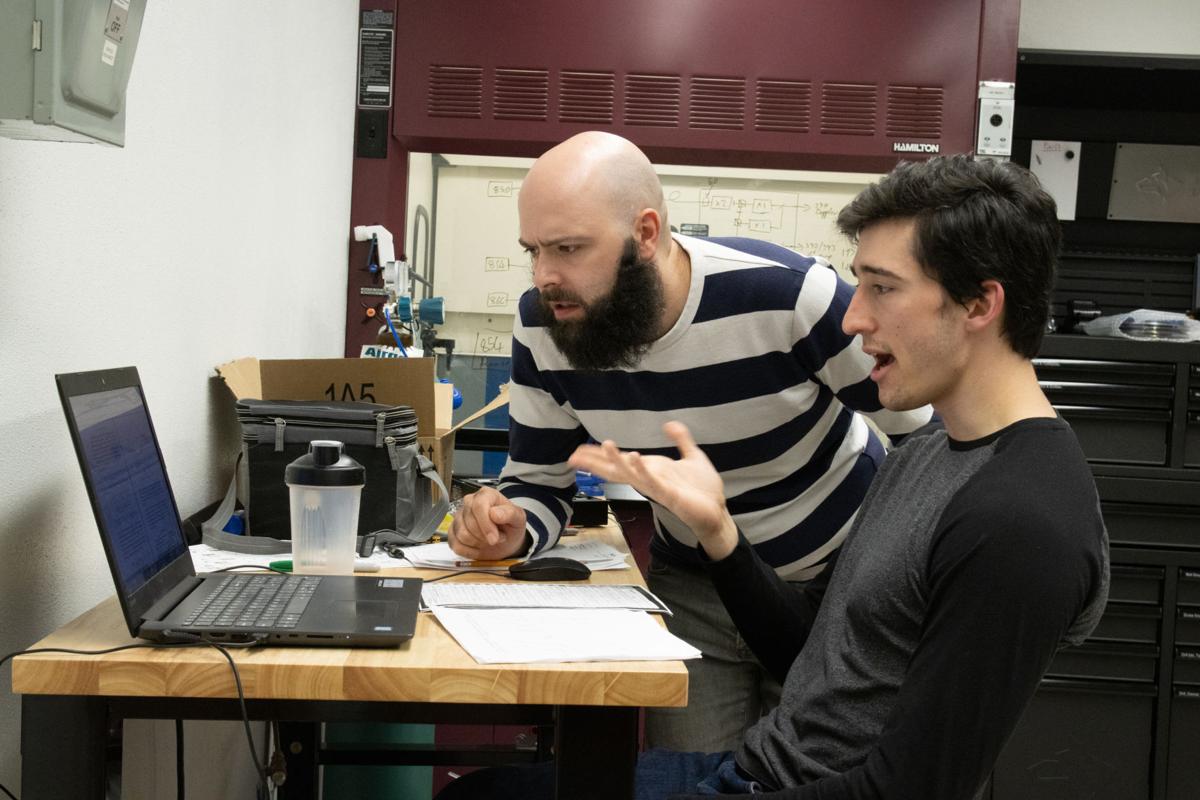 David Allcock (back), and Daniel Moore (front) need their math to be extremely precise. Their algorithms will be used to carefully manipulate the lasers they'll use to turn calcium ions into quantum bits. 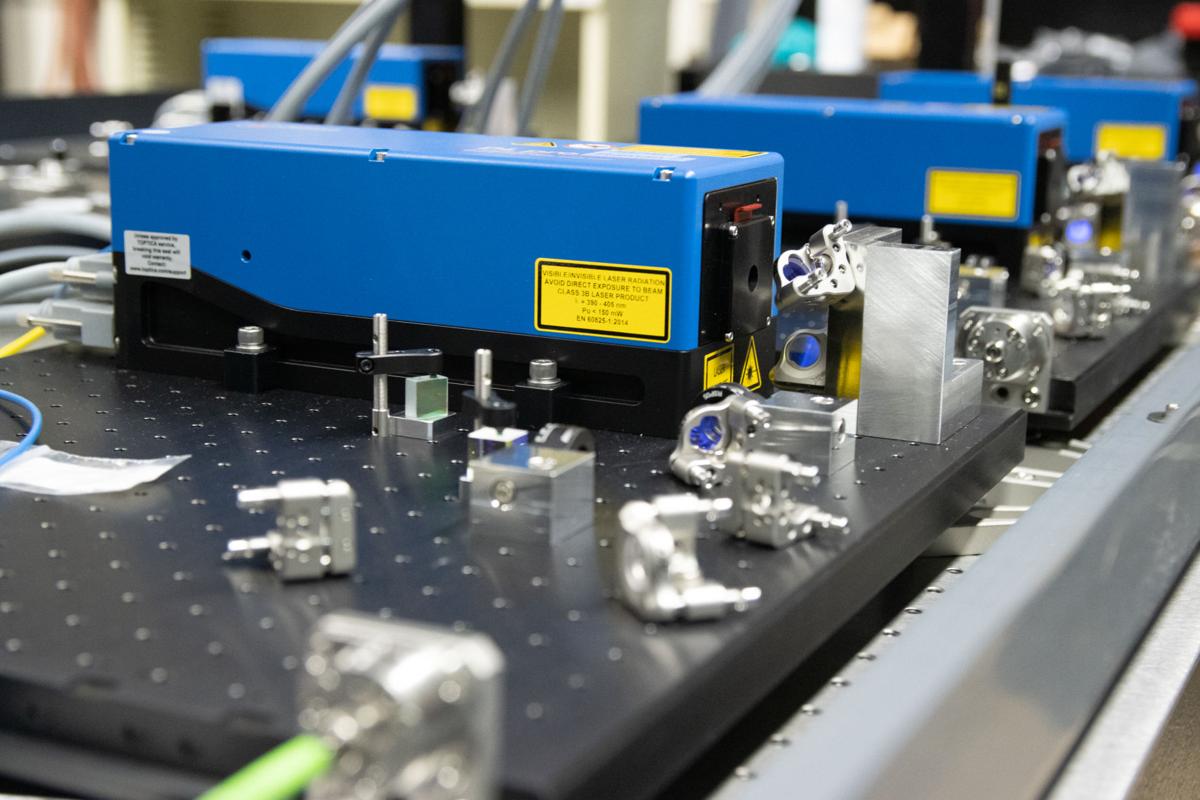 Each laser Allcock and his team uses is sent through a series of mirrors, beam-splitters and other units that allow them to achieve the precise properties needed for their research. Allcock says the lasers are essentialy very expensive versions of the laser pointers people use to play with their cats everyday. 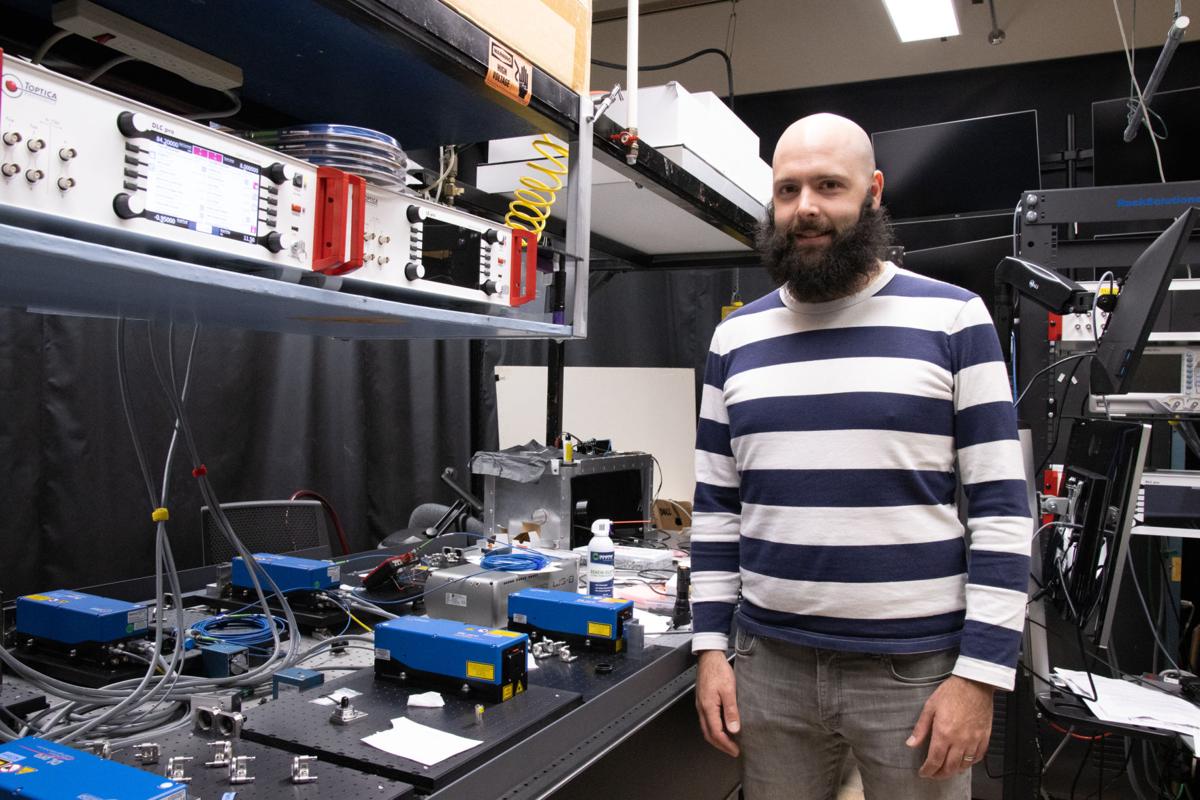 Dr. David Allcock left the National Institute of Standard and Technology to join the UO physics department. His research focuses on trapping ions and measuring their movement. He says that movement and how ions interact is a really important part of quantum computing.

I was partially right: they have computers.

The University of Oregon has invested in the promise of quantum technology. Quantum physicist David Allcock recently joined the UO Physics Department to continue his research on quantum computer technology, according to Around the O.

Google announced that it had achieved “quantum supremacy” on Oct. 23, according to the Nature Research Journal. Led by John Martinis, an experimental physicist, Google’s team programmed a quantum computer to perform a specific calculation that they estimated would take a classic supercomputer around 10,000 years to complete. Their processor, named Sycamore, did the work in three minutes and 20 seconds.

Daniel Moore, a UO graduate student in Allcock's lab, described quantum supremacy as using a quantum computer to do work that would essentially be impossible for even the fastest supercomputer.

The achievement was disputed by one of Google’s rivals, IBM, before it was even published. IBM claimed they completed the same calculation in 2.5 days using a classical supercomputer.

Being curious and uneducated about what quantum computers are, I reached out to Dr. Allcock and his team to see what I could learn about their research and Google’s achievement. Professor Allcock was happy to oblige.

Before visiting Allcock’s lab, I wanted to do some background research, so I read Quantum Computing for Babies. The book explains how classical computers use groups of bits, small electrical devices that can be either on or off, to store information. The bits are kind of like balls that are half blue and half red, but you can only ever see one half. The ball will always be blue or red, but never both. It takes a lot of bits to perform complex calculations.

Quantum computers use special bits called qubits, that stands for quantum bits. They can have states other than on or off, making them more useful for complicated math. These are like having a ball that can be any color or combination of colors, giving it the ability to communicate more complicated information.

The hard part is that qubits are tiny — the size of a single atom — and observing them working can interfere with the entire process.

Armed with this basic idea of what is going on in a quantum computer, I headed over to meet Allcock and his students at Willamette Hall.

“These are the lasers!” Allcock said.

Squeezed into a room bordered by heavy black curtains is a table where Allcock’s students assemble arrays of mirrors, beam splitters and other fancy bits that let them precisely control and manipulate their lasers.

Right now his lab is split, lasers upstairs, everything else in the basement. His new lab is under construction in Willamette Hall, and they will consolidate into one lab space when it is complete. At that point, they will move on to the main event: shooting calcium ions with lasers, making them into the bits needed for quantum computing and measuring their movements.

Allcock said that movement is how the individual qubits talk to each other. It is a bit like how a Newton’s Cradle works, where a series of identically sized, suspended metal balls rest against each other. If you swing the ball on one end, when it hits the other balls, the one on the opposite end will jump up.

Learning exactly how it all works turned out to require more than my decade-old education in general chemistry and a handful of computer programming courses could handle in the hour I spent with Allcock and his students. But I was able to understand why they’re doing it.

Allcock likened his work to developing early computer components. “No one really thinks about that. They think about algorithms and operating systems and servers. On some level, some electrical engineer has to figure out, ‘What’re the tolerances on all these voltages?’ And that’s kind of the level where we’re working on,” Allcock said.

Early computers were larger and much less powerful than the microprocessors most of us carry around in our pockets today. It took years of research and engineering to make the technology compact and efficient. That is where Allcock’s research comes into play. It doesn’t take a lot to make a single atom move, and that’s precisely what makes quantum computing so difficult. Small interferences, from even just a particle of dust, can disrupt the system.

So, how does this fit in with Google’s claim of quantum supremacy?

For Allcock and his team, Google’s breakthrough is a step forward for the field. “It’s not somebody discovering a new theory that’s gonna change what we’re gonna do. It shows everybody who is skeptical that they’re wrong,” Moore said.

“I don’t think it actually changes the state of our field,” said Jeremy Metzner, another of Allcock’s students. “You’re not gonna go home now and buy quantum computer online, sit down with it and start writing your word documents with it. There’s still no real practical application of quantum computing. But it’s exciting.”

Allcock’s students explained that one of the hurdles of quantum computers is proving that they can do what quantum physicists say they can. Google has made progress in that direction. Allcock and his team hope to make the technology more practical.

I still wanted to understand what makes a quantum computer better than a classic computer.

Moore, in his third year of a physics doctoratePhD, was happy to educate me about quantum computers.

When you ask a classic computer to do a task, it has to check every possibility individually, Moore said. He used searching a list as an example. If you have an unsorted list and you want to find something specific, the number two for instance, the computer will “basically just have to start from the top and just go through and look for it.” If the list has 100 entries, the computer will check each one. “A quantum computer can actually do better,” Moore said.

Moore said that there is a search function quantum computers can use called Grover’s algorithm. In the same unsorted list, Grover’s algorithm can find the number two in only 10 tries. The algorithm uses the square root of total entries to search for specific information, a significant reduction from having to search every entry.

I can see how that is useful. If I were looking for one person at a festival of 10,000 people, it would be great if I only had to look at 100 people to find my friend.

That is just one example of what a quantum computer can do, and I still don’t understand how they really work, but I’m told that is normal.

Okay, at least my confusion puts me in good company.

Reflection Box: Doing a story about quantum physics with no real knowledge of the subject may have been a bad choice. I didn’t feel like I understood enough to functionally explain quantum computing, but I thought my lack of knowledge could be of service to the reader. I proposed telling the story in first person as a novice’s experience in a quantum lab. First-person journalism is unconventional, to say the least. As a student, I feel obliged to challenge journalistic conventions. Weaving news into a first-person perspective was difficult, but I had a fun time writing this story.