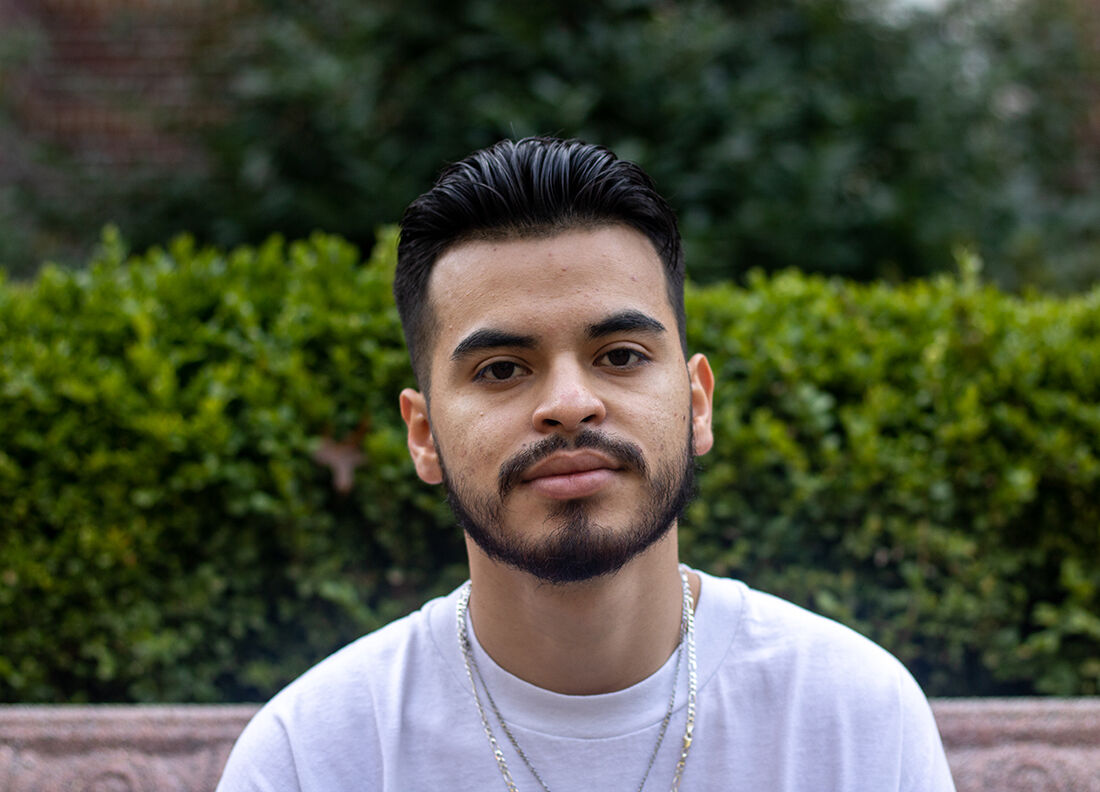 Eduardo Olivares says that being a Dreamer pushed him to work harder and stay motivated. “I am at a disadvantage simply for not being born in this country,” he said. “But I don’t see that as a weakness. I see that more as a strength.” Eduardo Olivares is a first-generation college student and DACA recipient studying advertising at the University of Oregon. (Will Geschke/Emerald) 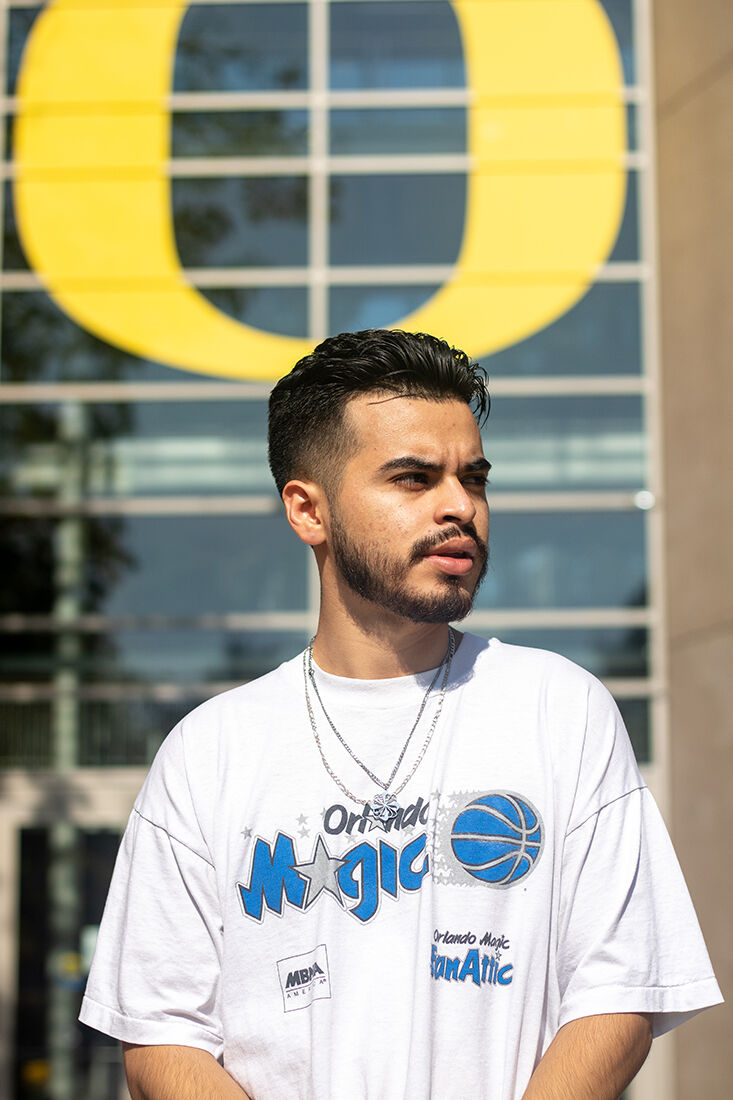 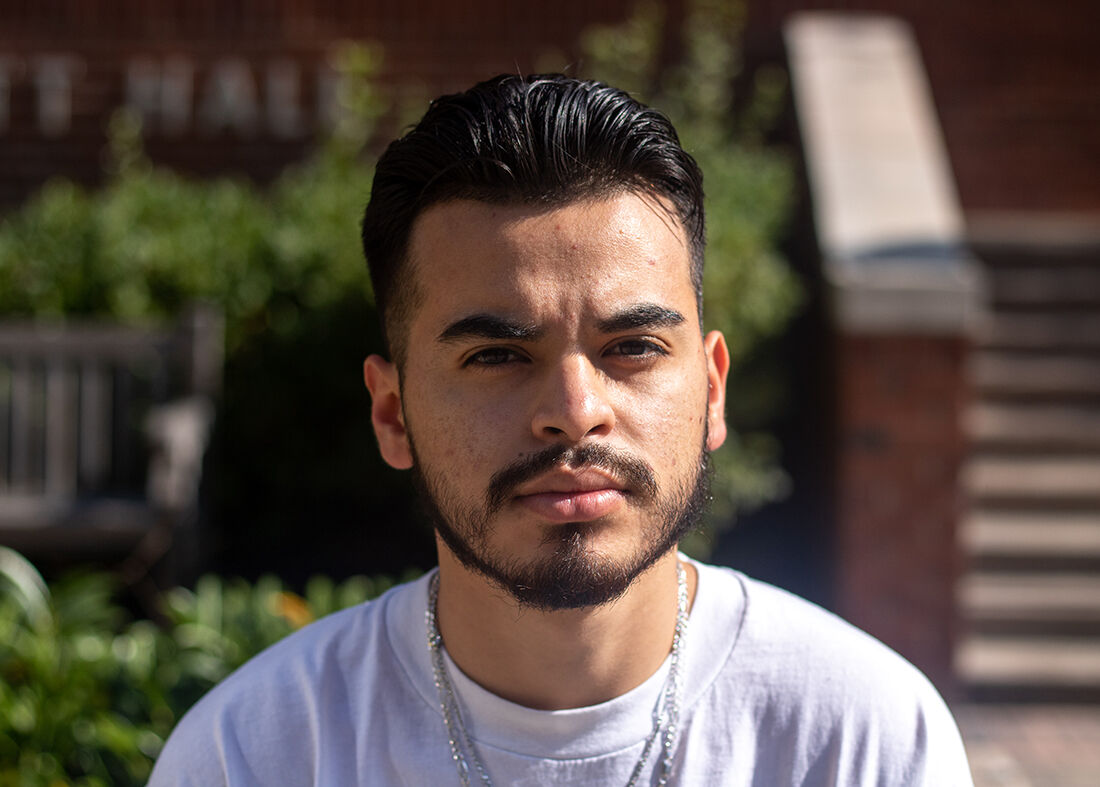 As a DACA recipient, Olivares said he is only able to plan his life two years ahead. “Who knows? Maybe next year my permit gets taken away,” he said. “It’s crazy how much our future is really at stake.” Eduardo Olivares is a first-generation college student and DACA recipient studying advertising at the University of Oregon. (Will Geschke/Emerald)

When he’s not busy with his studies or selling vintage apparel through his business BounceBack Thrifts, third-year advertising student Eduardo Olivares, a recipient of the Deferred Action for Childhood Arrivals program, wants to be a resource for other Dreamer students at the University of Oregon.

Olivares moved from Mexico to the United States when he was five years old. While he navigated unfamiliar surroundings, Olivares said he found a number of mentors throughout his life who have inspired him and guided him to where he is now.

As a first-generation college student, Olivares credits his school teachers for providing resources and support that helped him apply for college. In middle school, Olivares enrolled in Advancement Via Individual Determination, or AVID, a nonprofit college-readiness program that is offered at schools across the U.S.

“In middle school, I didn’t even know what college was,” he said. “My parents obviously haven’t had a college education.”

Through the AVID program, Olivares learned about his own goals as a student and prepared for college. He said his AVID teacher, Mrs. Baxter, was a big reason why he applied for scholarships and excelled in school. “She taught me ever since I was in middle school,” he said. “I remember talking to her and her telling me about the things I needed to do to get to where I want to be.”

Being a first-generation college student is something that Olivares takes a lot of pride in, he said. In high school, he saw getting into a college as a huge accomplishment not only for himself, but also for his parents.

“I really don’t know where I would be if my parents didn’t take that risk and bring us to a new country, so it’s definitely impacted me a lot,” he said. “I’m always grateful for my parents and what they’ve done to get me to where I am.”

Olivares said being a Dreamer student has also pushed him to work harder and stay motivated. “I am at a disadvantage simply for not being born in this country,” he said. “But I don’t see that as a weakness. I see that more as a strength.”

When he was 17, Olivares said he started the long and expensive process of applying for DACA, a program that provides protections to undocumented immigrants brought to the U.S. as children. “That process, to begin with, is ridiculous,” he said. “I don’t think people really understand what the program is really like.”

DACA renewal costs around $500, Justine Carpenter, the Director of Multicultural and Identity-Based Services at UO, said. However, Carpenter said the university has emergency funding available to help students pay for the cost of DACA renewal if the need arises.

Carpenter also said DACA recipients should consult an attorney when filling out the application. “The university contracts with a local immigration attorney and we get them in touch,” she said. “The attorney can provide legal services to DACA students, free of charge.”

Olivares said Carpenter connected him with the immigration attorney to help with filing his DACA renewal every year. On August 21, U.S. Citizenship and Immigration Services reduced DACA renewal protections from two years to one year.

Olivares said he is grateful to have a DACA work permit and be a part of the program. “There’s a lot of people that don’t even have a work permit,” he said. “I’m fortunate enough to be able to get a job.”

However, he hopes there will be an easier renewal process for DACA recipients and a better path to citizenship in the future. “There’s really no easy process for this,” he said. “It’s unfortunate that people are really just trying to have a better future and there’s so many barriers to overcome.”

As a DACA recipient, Olivares said he is only able to plan his life two years ahead. “Who knows? Maybe next year my permit gets taken away,” he said. “It’s crazy how much our future is really at stake.”

Olivares said he doesn’t think people fully understand that Dreamers have lived the majority of their lives in the United States. “This is really only the place we know to call home,” he said.

Since moving to Eugene when he was five, Olivares has set down roots and is passionate about building a community through his business, BounceBack Thrifts.

He first started his thrifting business when he was a freshman living in the dorms at UO. He soon met Harrison Stevens, who runs Stanley Thrifts. “I messaged him and I was like, ‘Yo. I am very passionate about what you are doing. I would love to sit down and just chat with you. Let me buy you lunch,’” he said.

Stevens responded right away and the two started working together, eventually combining forces to create the Neighborhood Eugene Sustainability Team. “It’s crazy what it has become,” he said, “from me just reaching out and just shooting a shot in the dark.”

Olivares said he doesn’t know where he would be now if he never sent that text to Stevens. Since they started The N.E.S.T, Olivares and Stevens have sold at the street fair and now have their own office. “We’ve been able to create something that’s bigger than us,” he said.

Not being afraid to reach out to people and taking chances is Olivares’ biggest piece of advice for other Dreamer students. “If I didn’t just shoot my shot, none of this would have happened,” Olivares said.

Olivares also said he recommends Dreamer students find a mentor during their time at the university. “There’s so many people that are just open and willing to help, but you just have to say you need help,” he said. Olivares said one of his biggest mentors is his fraternity brother Bryan from Sigma Lambda Beta, a multicultural fraternity at UO. “Finishing a four-year degree is already a huge accomplishment and he’s almost done with his doctorate,” Olivares said. “I find that very motivating and very inspiring.”

Olivares also wants to offer guidance and support for anyone in the same shoes. He is currently on the Dreamers Student Advisory Board, which is finding ways to help meet Dreamer students’ needs and break down barriers for them when asking for resources or other help.

“We’ve been working on different ways to reach Dreamers,” Olivares said. “But the truth is that many of us are scared to come out and really say our stories.