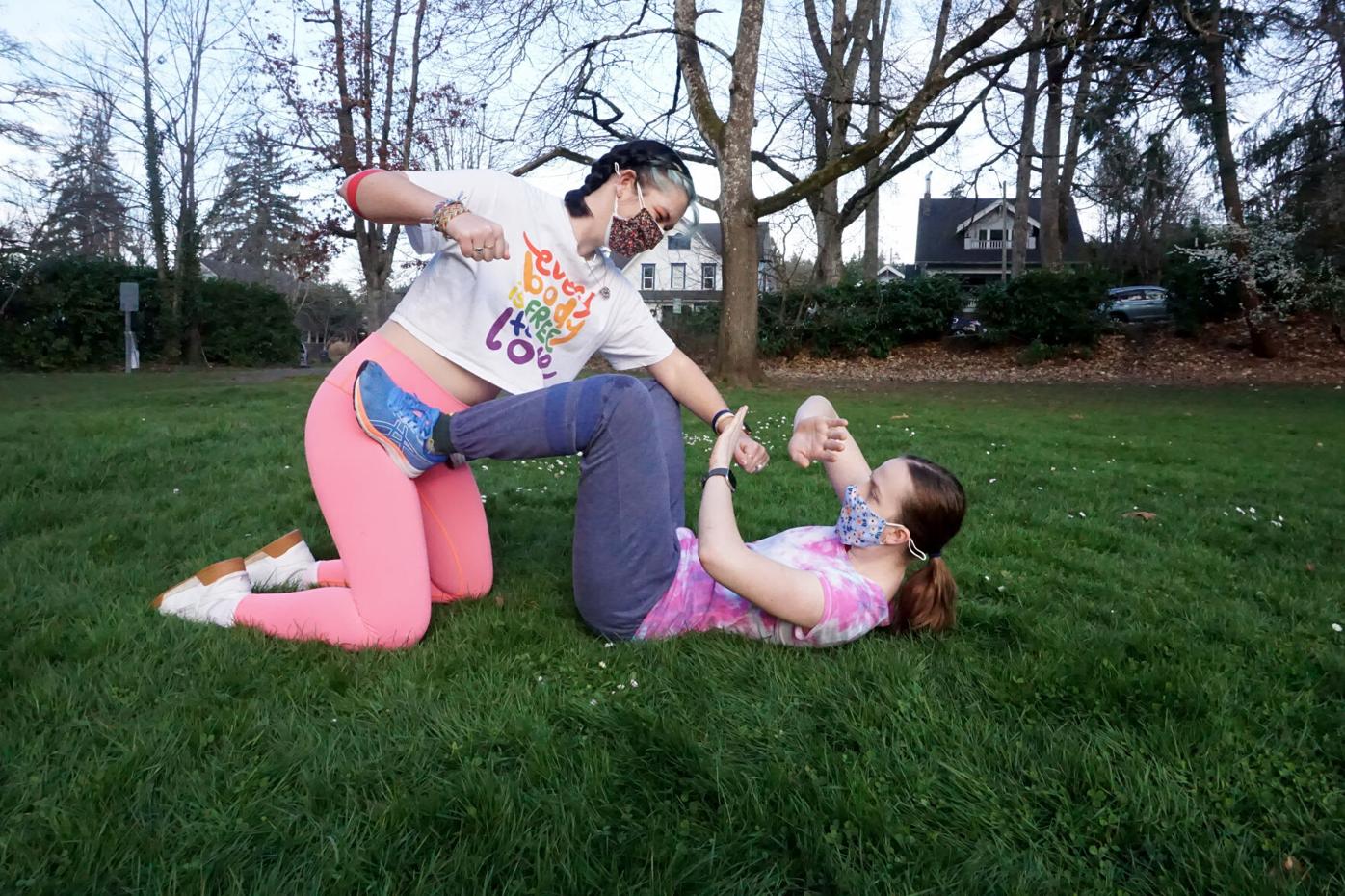 Former roommates Abby Sourwine (left) and Chloe Miller (right) practice some self-defense moves they learned in the Women’s Self-Defense class at the University of Oregon. The “ready stance,” where you put your arms out in front of you and put your feet up if someone pushes you to the ground, creates distance between you and an attacker. “It’s a barrier between you and whoever might be coming near you,” Miller says. “It’s a signal to someone that you know what you're doing.” 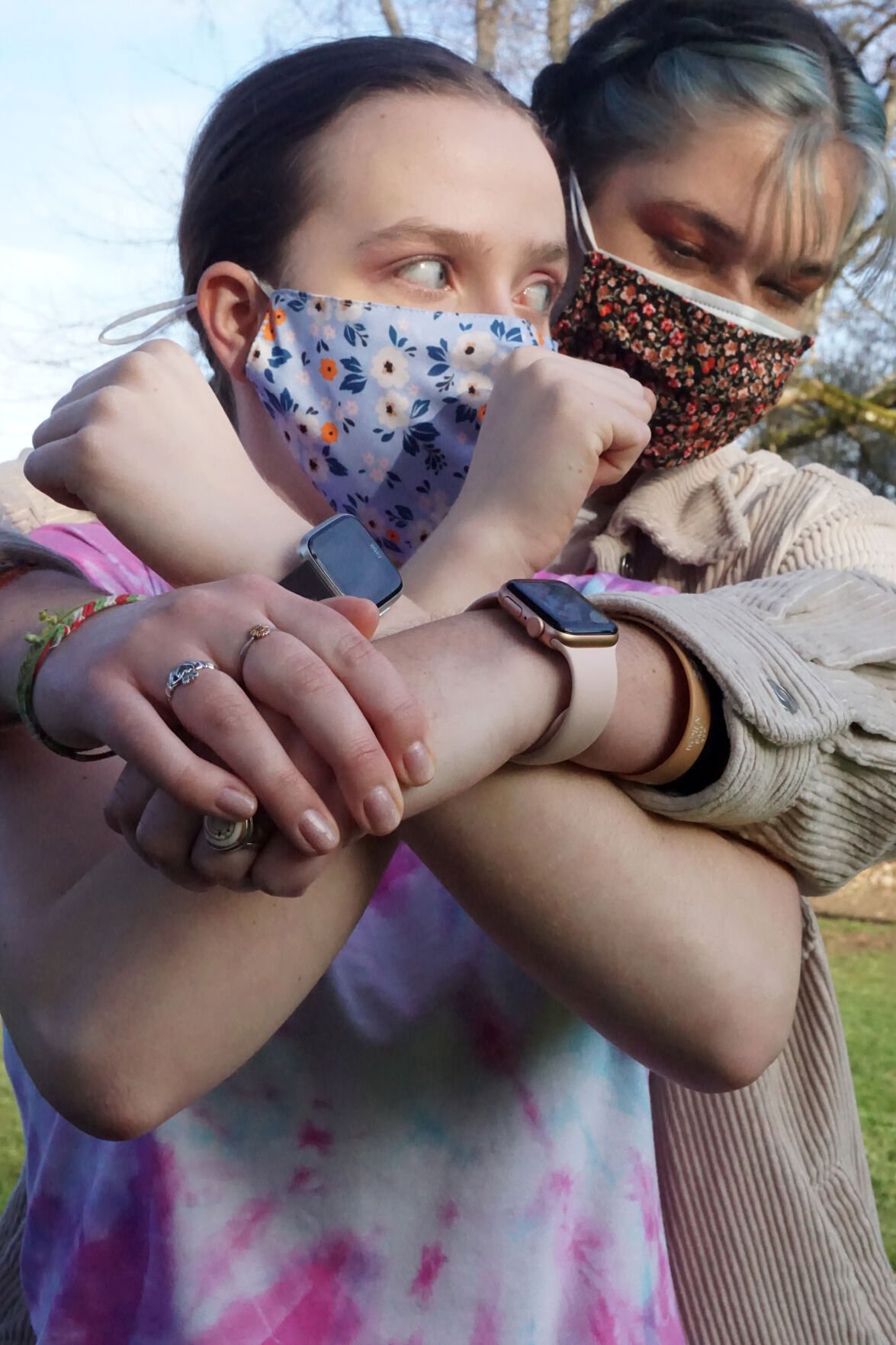 Abby Sourwine and Chloe Miller practice breaking free of an attacker’s grasp or hold. Practicing these moves with classmates felt a little weird at first to Miller, but eventually she became more comfortable. “It was always very helpful and always an encouraging atmosphere,” Miller says. “You didn’t feel like someone was yelling, ‘Ah! You did that wrong.’” 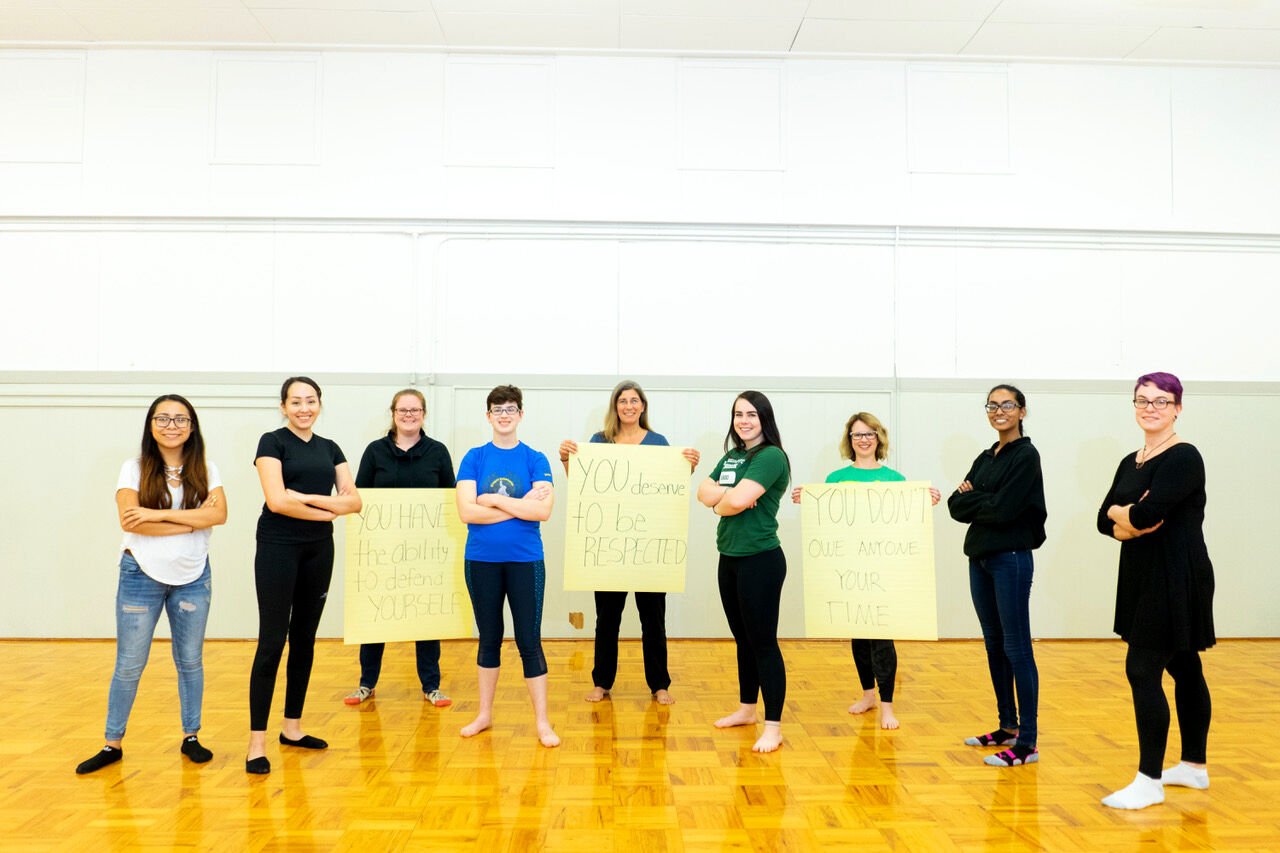 Jocelyn Hollander (5th from left) poses with two other instructors, Justine Halliwill (3rd from right) and Jessica Stainbrook (3rd from left), as well as students from the empowerment section of the Women’s Self-Defense class at the University of Oregon in November, 2018. This promotional photo advertised the course at the UO Student Rec Center to help increase enrollment.

Jess Thompson wove and pushed her way through the crowded dance floor at Taylor’s Bar & Grill. While the bar was packed with people drinking and dancing, Thompson was making her way outside to her friends. But before she could escape the crowd to make it out the door, a man she’d never met before stopped her in her tracks.

He appeared to be a college student with a muscular build standing a couple of inches taller than her. He yelled something that Thompson describes as “dumb and flirty” over the music. Just wanting to reunite with her friends, Thompson kept walking toward the door without a response.

The man reached out and grabbed her arm.

Thompson used her free hand to grab his arm, quickly twisting his wrist and swinging his arm behind his back.

The man released his grip on Thompson’s arm, and she also let go, backing away from him. He threw his hands up, yelling that he wasn’t going to do anything and disappeared into the crowd, leaving her alone.

Thompson learned the martial arts moves she used to defend herself against the man one year earlier while taking a class called Women’s Self-Defense her freshman year at the University of Oregon. Through her training, she learned how to enforce strong personal boundaries and refined her abilities to protect herself.

The University of Oregon’s Women’s Self-Defense class, PEMA 116, integrates a unique empowerment-based self-defense model that not only teaches students how to protect themselves by practicing physical defense strategies, but is also designed to help women build confidence.

Traditionally, self-defense programs are associated with physical training like martial arts and fighting moves, but the Women’s Self-Defense class also includes cognitive training that mentally prepares women for situations they may face. The class spends one-third of its time addressing the complexities that make self-defense for women distinct from a general self-defense class for all genders.

The University of Oregon’s PE and Sociology program worked together to build the class’ curriculum. The two-credit course is split into two parts: a physical side taught by a martial arts instructor that students go to twice a week and an empowerment side that students go to once a week.

On the physical side of the class, Ryan Kelly, who has taught self-defense classes for over 25 years, shows students how to get out of certain positions, what places are most vulnerable for attack and how to get attackers away from them. On the empowerment side, Jocelyn Hollander, a sociology professor with a specialization in gender, women’s self-defense training and violence against women, leads students through exercises on how to set boundaries, how to assert themselves and which verbal self-defense strategies should be used to deescalate potentially dangerous situations. Kelly and Hollander began the class in 2014, and since then, two more instructors have joined the Women’s Self-Defense class to instruct on the empowerment side.

“I think the empowerment side is really important to get into your head because confidence is very important for efficiently executing the moves,” Thompson says. “But the physical aspect of it is empowerment in its own right.”

“The reality is that if the person who’s assaulting you is your friend, it’s really unlikely that you’re going to haul up and hit them in the nose or stick your fingers in their eyes or do any of those things,” Hollander says.

Hollander also notes how behavioral expectations associated with gender can make self-defense difficult for women. Women are conditioned to be lady-like, polite and quiet, which can prevent them from taking action or speaking up when they experience unwanted advances. By learning about self-silencing and being aware of how it can prevent self-defense, students are less likely to self-silence, Hollander says.

Abby Sourwine, a University of Oregon student who took Women’s Self-Defense her freshman year, recalls a time before she took the class where she silenced herself in a potentially dangerous situation.

During her senior year of high school, Sourwine and her friend were walking back to her car in their local mall’s parking lot. The mall had just closed, and before the two arrived at their parking spot, they both heard fast-paced footsteps behind them.

When the two turned around, Sourwine says a man wearing all black, a hoodie and a black bandana covering his face was sprinting toward them. He promptly stopped in his tracks four feet away when the women turned around to face him.

All Sourwine could do was laugh and say, “Oh! You scared me!”

The man silently stared at them. Sourwine, her friend and the man stood in silence for a few moments longer before Sourwine and her friend ran toward their car. The man took a couple of steps after them before stopping again. He did not pursue them to their car.

“I knew that I had acted in a strange way. I talked to him like he was a friend of mine, but I didn’t know him. I had no idea what his intentions were,” Sourwine says.

One of the first activities that Sourwine says her class did in the empowerment section of the class was practicing being loud. Sourwine says they learned how to project their voices and yelled, ‘What are you doing?’ and ‘Get away’ to let potential perpetrators know that they knew something was wrong.

Sourwine also says that, in the situation she described, she would’ve run back toward the mall where there were other people instead of toward her car, where it was less populated.

Through the Women’s Self-Defense class, students say they learn to live their lives without fear. Hollander says the empowerment side of the class not only makes students more aware of the societal barriers to self-defense, like self-silencing and the relationships women have with their attackers, but also guides students in reflecting on difficult topics in a setting without judgement.

Chloe Miller, a University of Oregon student who took Women’s Self-Defense I and II during her freshman year, says the class’ empowerment section helped create a space where women could talk about difficult topics.

When she was in high school, Miller says she went on a camping trip where she met a group of boys to play pick-up baseball with at the campsite. They biked deep into the forest to find a clearing for their game. Once the game was over, and the group dispersed for lunch, Miller found herself alone with one of the boys.

She couldn’t explain it at the time, but she says she felt uneasy and unsafe. Miller pushed the feeling to the back of her mind, dismissing it.

The boy started to close the space between them. He kept coming toward her until eventually, he had her cornered against a tree. Miller remembers freezing and wanting to curl up into a ball.

Having taken the class now, Miller says she would’ve tried to put as much space between her and him as possible.

“Just as simple as putting my hands up,” Miller says. “I did eventually make space, but it was after a while and I always wish I’d done it right away. As soon as I felt something was off.”

Miller shoved the boy away from her. He became angry and kept coming toward her. She tried to get away, and Miller picked up one of the plastic Wiffle Ball bats from the baseball game and began hitting him with it. Miller says that it was one of the scariest moments of her life.

Once she was able to get away, Miller felt terrible. Whether it was warranted or not, Miller says she felt awful for hitting him.

During the first few days of the Women’s Self-Defense class, during both the physical and empowerment sides of the class, the students were introduced to difficult topics and discussed their experiences. Miller says the instructors made it clear right away that there would be no judgement and the class was a space to learn.

“We talked about a lot of heavy stuff, so it was hard to feel relaxed on the first day,” Miller says. “I definitely felt more at ease at the end of that class.”

Although the class teaches that women are less likely to need to use the material learned in the physical side of the self-defense class, Hollander and Kelly both emphasise how important it is to know how to physically defend yourself in cases where verbal self-defense doesn’t work. Kelly teaches that physical self-defense is meant to be a last resort for when attackers cross the verbal boundaries women place.

Miller says she recommends the Women’s Self-Defense class to “anybody who doesn't have the confidence to just walk down the street.”

“You learn confidence,” Miller says. “And you learn not to be scared.”