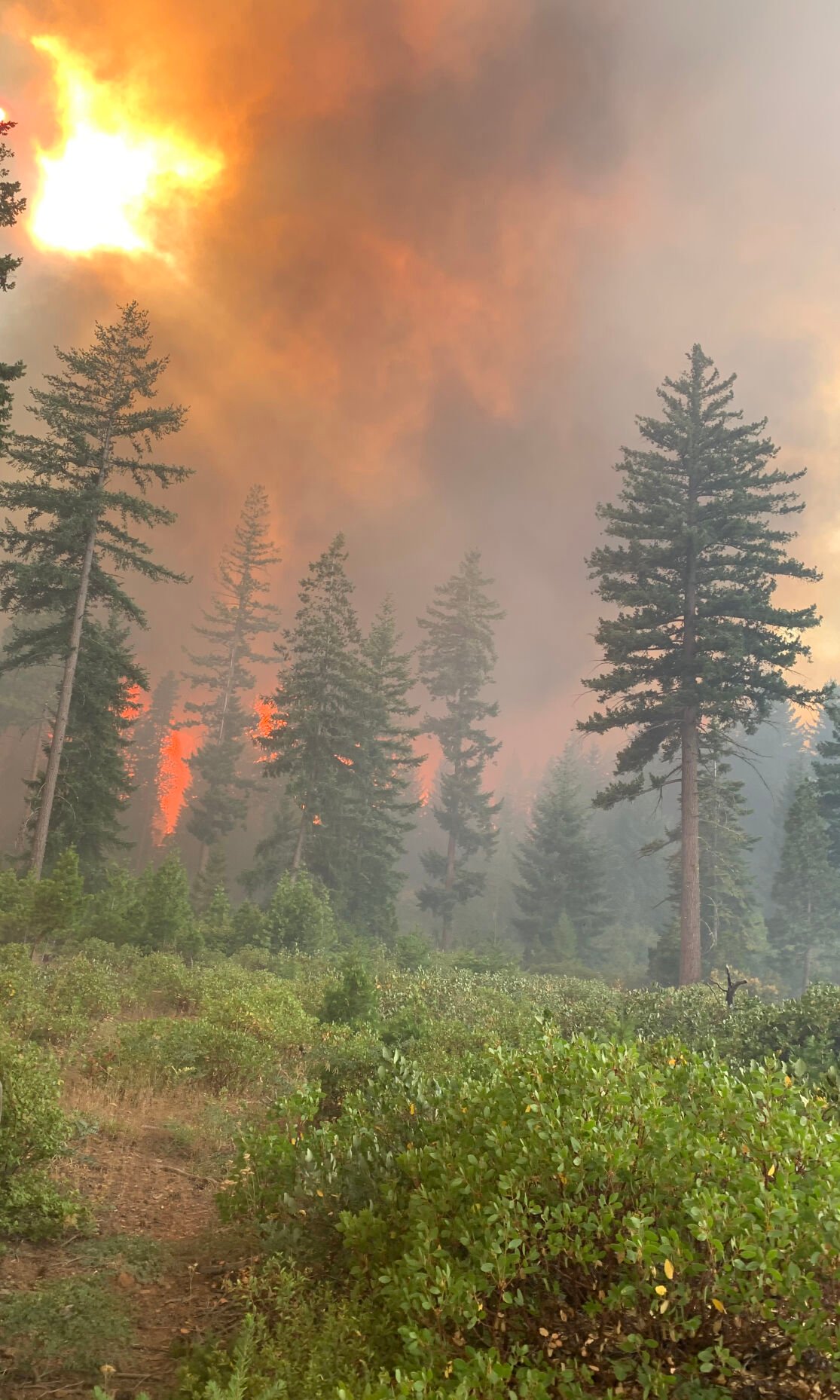 Smoke billows from the P-515 wildfire near the Warm Springs Reservation close to Madras, Ore. Wildfires in Oregon burned over 1 million acres of forest in 2020, causing over 40,000 people to evacuate their homes. 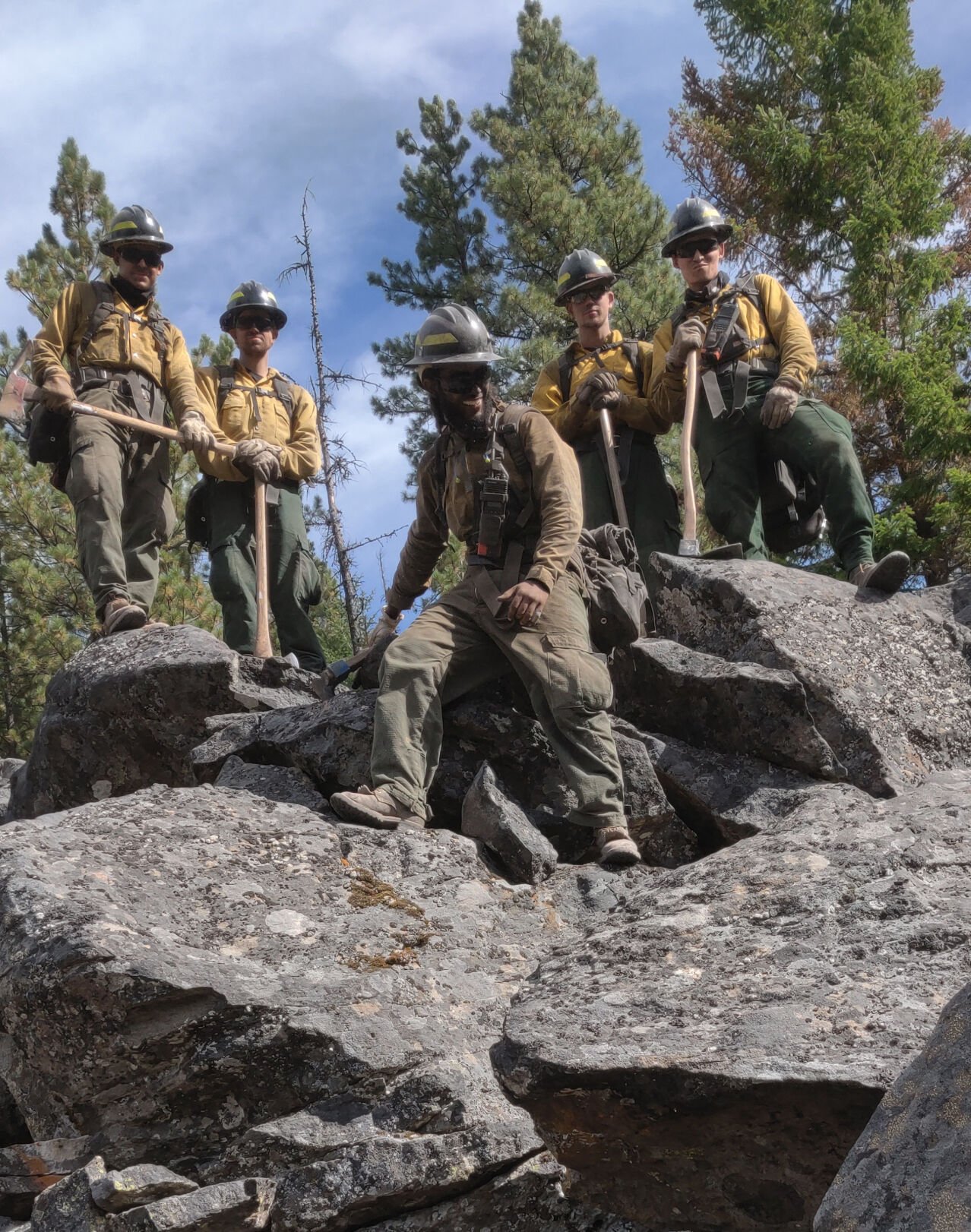 Erik Lichtenberger (second from left) and other fire crew members pose during a break from fighting the P-515 fire that raged through eastern Oregon in August and through September.

A blue sky is engulfed in orange smoke from the August Complex fires in northern California in October. Under normal wind conditions, a wildfire can move between 6 to 14 mph and can burn at over 1,400 degrees Fahrenheit.

The sky was a deep orange. Clouds of smoke billowed from the treeline, and white ash began to descend on Erik Lichtenberger and his crew.

The wildland firefighters’ much-needed lunch break came to an abrupt halt. Yelling swept across the camp. Lichtenberger hastily rose from his seat, looking to his left.

What started as a small lightning fire evolved into a wall of flame as gusts of 20-plus mile per hour winds blew through the valley. The flames ripped through tree after tree as the fire screamed toward the crew, who sprinted in the direction of their trucks before driving away. They had narrowly escaped disaster.

It was the first day of Lichtenberger’s second shift as a firefighter. He was hooked.

“That was the selling point for me,” he says. “That's when I was like, ‘I'm in, I love this.’ It sounds weird. You don't want to see the forest burn. But when the forest is burning in front of you man, it's a different feeling.”

Now in his junior year at University of Oregon, Lichtenberger put his education on hold for the fall to pursue wildland firefighting. It’s an exciting detour which breaks up the repetitive nature of a school year during the COVID-19 pandemic. The gig is both dangerous and physically demanding, but it’s that feeling of adrenaline that kept Lichtenberger coming back for more.

His experience isn’t an isolated one. Hundreds of students and other individuals have begun wildland firefighting as the climate slowly deteriorates and wildfires become increasingly frequent.

The West Coast is burning

Fires in the western United States are more prevalent than ever. They’re more destructive too.

According to NASA Climate, 61 percent of fires over the past six decades have happened in the last 20 years. The number of “megafires,” fires that burn more than 100,000 acres, have increased in the past 40 years. There are no documented megafires before the year 1970. A primary factor in the spike has been rising global temperature. NASA reports that 17 of the 18 warmest years on record have occurred since the year 2001.

“Fires are becoming a year-long thing,” Lichtenberger says. “They don't end anymore, which is really concerning. If that doesn't tell you something, it should. Southern California's on fire pretty much all year.”

As wildfire seasons become longer and more devastating with each year, wildland firefighting on the West Coast is crucial. There’s been significant growth over the past eight years in privately contracted fire crews in the Pacific Northwest.

According to Jim Gersbach, a public affairs specialist with the Oregon Department of Forestry, there were 60 companies and 234 20-person crews in the Pacific Northwest for the 2020 season. There were only 51 companies with 173 crews at the beginning of the 2013 season. A large chunk of the increase stems from the state of Oregon where 214 of the 234 crews reside and the Department of Forestry manages 16 million acres of forests.

It’s been a weird few months for Lichtenberger. If you’d asked him midway through the summer, he planned to return and take classes along with the rest of his peers. But he took a different route.

It wasn’t premeditated, but rather a spur-of-the-moment job offering that caught his eye back in July. Early on, the process was easy: sign up, online orientation, a couple of weeks of training videos and informational courses.

“They teach you about your tools, your bag, different types of fire, how fire starts, how it acts, just the nature of it,” he says.

Then came the field tests. The private contracting company that Lichtenberger applied for put him and his fellow recruits through intense physical training including long hikes in near-100-degree heat with 45-pound bags on their backs.

“They wanted to weed out the people who really weren't ready to do it,” Lichtenberger says.

Once past the training phase, the waiting game began. During the fire season, which typically runs from July or August until mid-fall, wildland firefighters like Lichtenberger are on call 24/7. They’re required to have their phone on them at all times and to always be within one hour of their assigned compound — a station holding the crew’s gear and vehicles.

While some recruits wait weeks before receiving their first call, such as Abe Thornburg, a UO student and member of Lichtenberger’s crew who waited six weeks, Lichtenberger’s first call came roughly a week after he completed his training. “This is an emergency dispatch,” the prerecorded message says. “Be at the compound in one hour.”

After arriving at the compound, crew members don their gear: fire-resistant Nomex pants and shirts, 8-inch leather boots with Vibram soles to guard against the heat and 20-to-35-pound packs filled with food, water, camping supplies and a foil-wrap fire shelter to use in the event of an emergency.

As soon as gear is in order and each member is present, 20-person crews head out for what tend to be 14-day shifts in the wilderness.

There’s nothing glamorous about wildland firefighting. It’s not normal firefighting; it’s often hard to safely put an end to the fire, Lichtenberger says.

“When a fire stands up and starts moving at like 25, 30-plus miles an hour, nothing we can do,” Lichtenberger says. “You can stop a house from burning. You can stop it from burning the houses next to it. You cannot stop a forest fire.”

Fire requires three things to burn: heat, oxygen and fuel. Crews like Lichtenberger’s can't control heat or oxygen, but they can control the fuel. In this case, the fuel is the plants, shrubs and soil that the fires tear through.

Lichtenberger worked on a handcrew, spending time behind the line of fire using axes and shovels to dig two-foot-wide trenches. The trenches remove topsoil down to the mineral level, leaving no flammable material for the fire to consume.

Aside from digging trenches, handcrews spend most of their days holding the line — spacing out along a containment line to make sure the fire doesn’t jump the area they’re patrolling. Crew members comb through burned areas and look for pockets of still-burning embers in a routine called “mopping up.”

“You’re camping out in a tent for two weeks, maybe getting a shower,” Thornburg says. “Really long days like 5 a.m. to sometimes 9 or 10 p.m., and that’s a short shift to some people.”

It’s not what many envision.

“Everyone thinks that we’re like these heroes because the forest fire agencies and things like that,” says Courtney Kaltenbach, co-director of the UO Climate Justice League who fought fires over the summer. “We’re modeled after the military, so they have a lot of the same imagery like ‘the lost soldier’ or ‘the hero in the forest,’ and we use helicopters and things like that. But the reality is that we can’t really actually fight fires.”

In the aftermath of the windstorm that nearly wiped out his crew on his second run, Lichtenberger caught a glimpse of the pain and suffering a fire can cause on a community. After hastily escaping their campsite, the crews headed toward Medford, Oregon, where a solemn site awaited them.

“We were lined up getting a briefing from our crew boss at the end of the day,” Lichtenberger says. “And you just look up and you just see all these windows cracked and people staring at you. People walking around just like lost. We had this one lady who was walking her dog for the entire night, just in shock, just freaking out.”

He says he and his crewmates felt helpless. They could feel the pain. Even though they had done all they could, they felt guilty.

A passion for the environment was the primary factor leading Kaltenbach to wildland firefighting. After working to defend forests on paper, she took it upon herself to make a difference on the ground.

She fought the Pine Gulch fire in Colorado in early August — the biggest ever recorded in the state. After her experience, she says she’s more concentrated than ever on climate safety.

Others, like Lichtenberger and Thornburg, joined on a whim, and while they had previous interest in environmentalism, gained immense perspective during their time on the job.

“I've definitely been someone who's been environmentally conscious for a long while, but being out there and kind of seeing and learning about the past 20 years, 30 years, 40 years of fire to today and the season we just had, it's pretty undeniable that we're losing,” Lichtenberger says.

“It’s reminding me of how real climate change is and how we’re not doing a lot,” Thornburg says.

As the West Coast’s ecosystem begins to crumble, wildland firefighters are more in need now than ever. Lichtenberger and his peers could have easily slid back into the routine of online education. Instead, they spent their summers battling a climate inevitability in a line of work which looks poised to become more prominent in coming years.

“Fire really changes you,” Lichtenberger says. “I'd say the first few, you really learn a lot about yourself. You leave for two weeks and you come home and sometimes it feels like the world hasn’t really done anything.”

As wildﬁres become more frequent, student ﬁreﬁghters join the cause to protect the West Coast.

Shane Hoffmann is a writer from Ann Arbor, Michigan. He writes about the intersection of culture and sports, the climate, food, travel and more. In his free time he enjoys watching and playing sports, especially basketball as well as cooking.