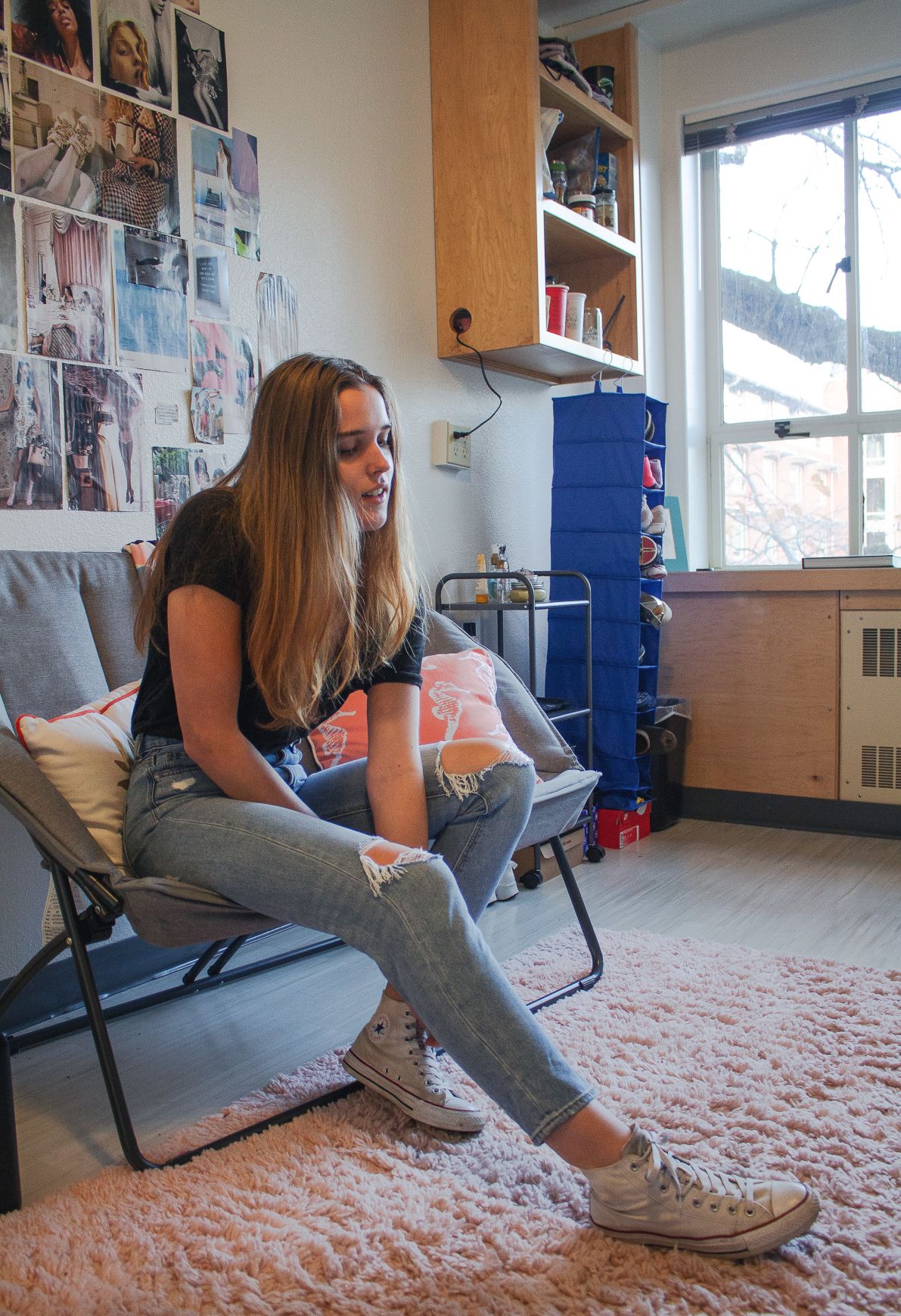 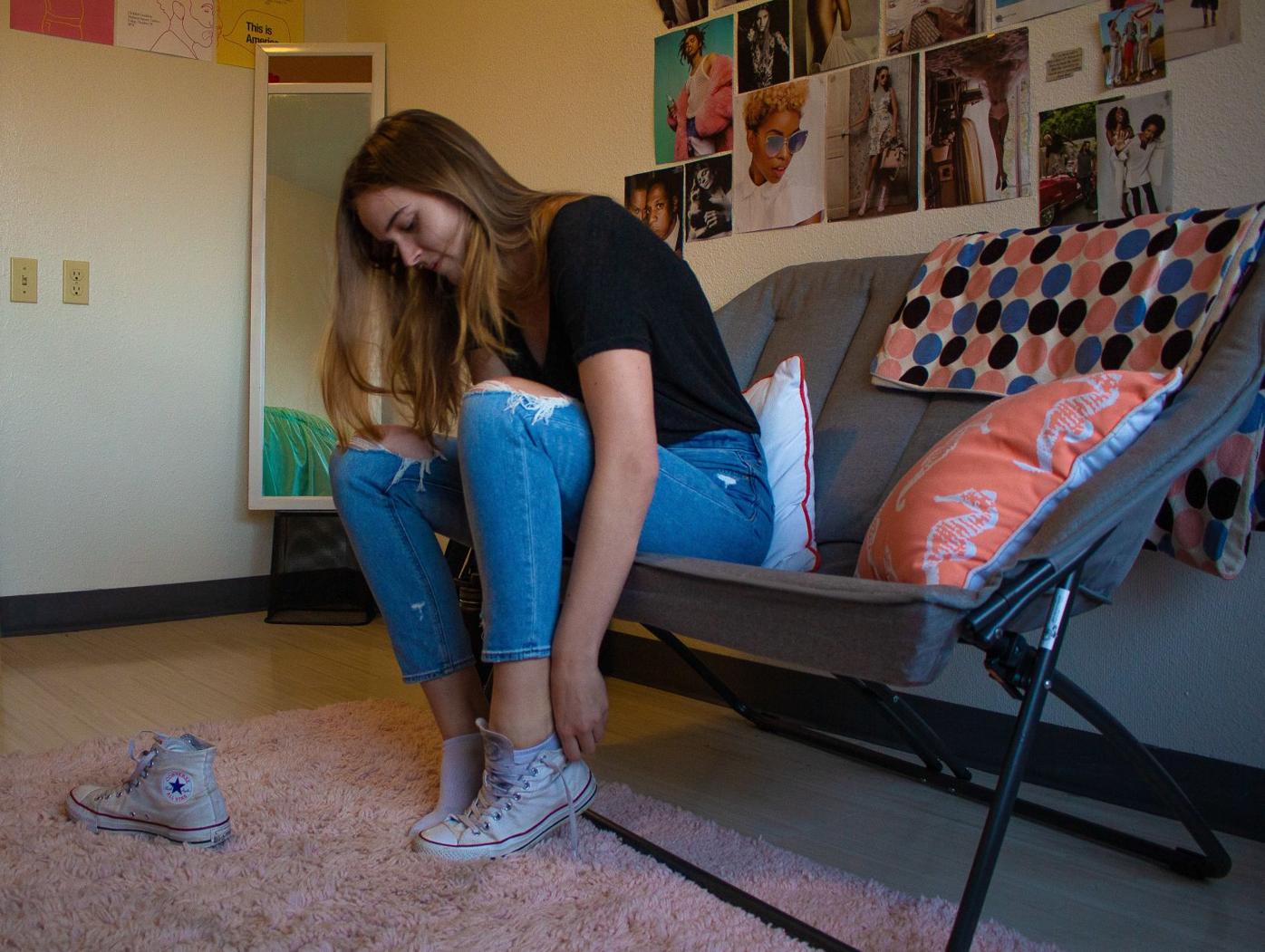 I stare down at my thighs, they stare back. What is most glaring is the gap that no longer exists. My heart drops and my fingers begin to tingle, a slow pounding filling my ears. Pressing harshly on my inner thighs I think: Am I about to have a panic attack over this newfound discovery?

I send pictures to my friends in horror. They respond with the typical “You’re not fat!!” and “OMG if you think you’re fat than what am I?” These texts never calm my body anxiety. I can be the skinniest person in the room, but will feel like the elephant. What I can’t recognize in myself I envy in others: the cute, flat tummies, skinny legs and rounded butts. I can’t look at others without comparing myself to them and subsequently feeling bad about myself. I have had, and still have, what is hard to recognize in oneself: body dysmorphic disorder.

There isn’t a definitive answer to exactly how body dysmorphia can start. Many begin to show signs of it as early as six years old, but it most often occurs when they enter their adolescent years, especially teenage. Research from the American Psychiatric Association in 2013 reveals that it affects men and women equally. In the United States, it affects 2.5% of males and 2.2% of females. There are a multitude of factors that can contribute to its development, and it varies case to case. Body dysmorphic disorder can occur because of a biological predisposition, other neurological factors such as a hormonal imbalance or outside environmental trauma.

Body dysmorphic disorder is a mental illness.  It is difficult to diagnose because it is easy to hide and many are already hiding their compulsions and obsessions from the general public. However, once diagnosed there are two common options for treatment: cognitive-behavioral therapy and medication. Antidepressants (specifically selective serotonin reuptake inhibitors) can be prescribed because of the brain’s chemical imbalance. In therapy, one can be instructed to replace negative thoughts with positive ones. According to Dr. Arnold Lieber,  “Exposure and response prevention are two key processes involved in cognitive-behavioral therapy.” Response prevention can help teach an individual to resist the urges of covering up with clothes or makeup, seeking affirmation about one’s appearance and spending time in front of a mirror.

I find myself asking often, was it sudden or gradual? Did I ever see myself normally in the mirror? I know I am already hard on myself, unbelievably so, but felt no one else could get to me. Eventually, the words seeped in, filled the cracks I created in myself and expanded them until I was left with gaping holes.

When we are young, we latch onto the silliest of phrases and words. I remember when a child said “shit” as he knocked over his juice cup, taking after his mother’s everyday mouthy vernacular. I laughed in the moment, but the amount children unconsciously absorb from their surroundings is insane. Unnerving, really. There was a time when I was about ten when a phrase stuck. It was nonsensical really, but has affected my life in a way that still plays out today.

I remember it was drizzling outside, probably winter. I was wearing a Tinkerbell shirt-- a staple item of my fifth-grade closet. Its base was white with a colorful checkered pattern taking up most of the front and Tinkerbell overlayed in black. She was an icon, a fierce little thing. Oh, how I wished to be her, to be her in body and soul. She was petite, with a slim waist and perfect blond hair. Everything I wished to be, even as a fifth grader. At that age, I  know I shouldn’t have been so focused on my looks, but rather having fun with my friends or spending time with my family. Looking back, I wish I had enjoyed more of the trivial aspects of middle school like getting an extra pudding cup for lunch or who I was going to sit next to in choir, rather than if anyone was going to make fun of my new bangs or how much I weighed.

But the world gets to everyone at some point. I guess fifth grade was just my time.

I was in class, just before the bell would ring to signal its beginning with the familiar double ding. There was light conversation in the room. Students were mostly in their seats, but some crowded around a boy with a Nintendo DS while others were rushing in the last minute. My teacher was looking over the lesson at the front of the room by her desk. Everything felt normal, a typical morning.

The class was math, I already hated math. Now I hate it more, but I doubt this fact actually has anything to do with what she had said. It’s just an abomination of a subject.

Anyway, the bell rang and the teacher started to speak. The “hello’s” and “welcome to class’s” were tossed out. She was already in a place of absent-mindedness.

Then, out of nowhere, she nonchalantly said one phrase that sticks with me today, crossed my mind yesterday and will resurface tomorrow:

“If you can pinch an inch, you better get yourself to the gym.”

It made me look down at my stomach, conscious, aware. I grabbed it and pinched my belly, unsure what an inch looked like in skin, but the ability to grab anything at all horrified my sensitive, innocent soul. I must have thought I was fat, and although there are numerous pictures to prove I was not, I already knew I was larger than the average fifth grader-- at least in height. I was tallest in my class and very proud of the fact. I was not proud to be fat, but I wasn’t fat. I only thought I was.

Until recently, my thighs have never touched. Now the unfamiliar and uncomfortable rubbing of my thighs as I walk to class is a giant burden. With that one phrase from my fifth grade teacher, I became hyper aware of every last inch of fat, cellulite and unwanted leg muscle that left my legs feeling bigger than they actually were. I was just a child still growing into my body, but instead of growing up I was afraid of growing out. As I got older, my body dysmorphia began to encompass more than my general stature. It became a list of flaws and thoughtless obsessions.

A common misconception about body dysmorphia is that it only affects how a person views his or her body shape, but in reality, body dysmorphia embodies more: It can include compulsive behavior regarding looks and grooming, social anxiety induced from one ’s appearance and constant comparison to others to a point of complete consumption. Often people attempt to ‘fix’ their perceived flaws and can sometimes be satisfied with the results. However, eventually the temporary fix no longer suffices and they fixate again, on the same thing or something new.

When I was young, I would often grow tired of how my hair looked, then beg my mother to take me to the salon to get it cut or dyed. One instant at 13 centered around my mother’s friend who had flippantly mentioned my hair looked darker than it used to as a child. From that, I gleaned I looked odd. The next day I was in a salon bleaching my hair back to its ‘natural’ platinum blond. I never saw it as destructive, merely a fun cosmetic choice that many people make. It wasn’t until my hair started breaking and falling out by my senior year of high school that I became worried, but even then I deemed it as stress and came to the conclusion that my obsessive behavior with bleached hair wasn’t the catalyst of my hair loss, but rather an unhelpful sidenote.

There was also a time in high school I became so obsessed with looking in mirrors that I ran into a wall while looking at myself. At the time, I laughed about it, thinking I was so dumb and typically self-absorbed. I didn’t equate it to the tedious hours I’d spend at night staring at my reflection in the bathroom mirror, qualifying it as only grooming. There were days I’d dread leaving my room because of an unexpected breakout, and days I’d never leave the house because of it. Even now, I’m filled with an overwhelming sense of fear when I have to leave my room sans an adequate appearance. Every pimple feels like an insurmountable mountain. I find myself coveting the flawless, practically poreless skin of the girls I see on social media and feel lesser because it isn’t me.

A dichotomy astronomically messes with my head: I know I don’t need to conform to a narrow beauty standard, yet I always feel depressed when I don’t look like the other girls on my Instagram feed. It makes me want to crawl under my covers and never leave my bed and sometimes, that’s what I do.

There are good days too, and I’ve made progress. I try to go to the gym as often as possible (even though I’m basically crying on the inside every time I enter the student recreation center), and I know I’m healthy which is what matters most. While there is a frequent voice in the back of my mind taunting me with the phrase I picked up in fifth grade, the people I surround myself with now are a huge support. Encouragement and affirmation, while seemingly small notions, can go a long way, even if they don’t eradicate the anxiety. However, I can’t rely on an outside source of affirmation; I try to change negative thoughts into positive ones, too. At times, it’s subdued, which is all I can ask.

I stopped putting on makeup every day in an attempt to take control of my body dysmorphia and have become used to not wearing it. However, I am careful about falling back into patterns. While I do enjoy dressing up and doing my makeup, it’s really easy to fall back into an obsession of looking perfect. The more often I wear it, the less inclined I am to stop and the more anxious I start to feel without it. It becomes a vicious cycle that I prefer to avoid.

I don’t blame my fifth-grade math teacher for what she said; my body dysmorphia would have happened whether she said it or not. Maybe I would have fixated on something else spoken a year later or gradually would have begun to hate my body due to the influx of social media. Before, my decisions in my everyday media consumption were unconsciously influencing my perception of myself, and while the media isn’t completely off the hook for how it can inaccurately present the world, I have learned to become more aware of what’s real, and when I watch shows like America’s Next Top Model or The Bachelor, I take it with a grain of salt.

I do try not to care-- and it’s possible, but it’s hard. The easiest thing to remember is that everyone’s body is beautiful. It’s also the hardest thing to believe.