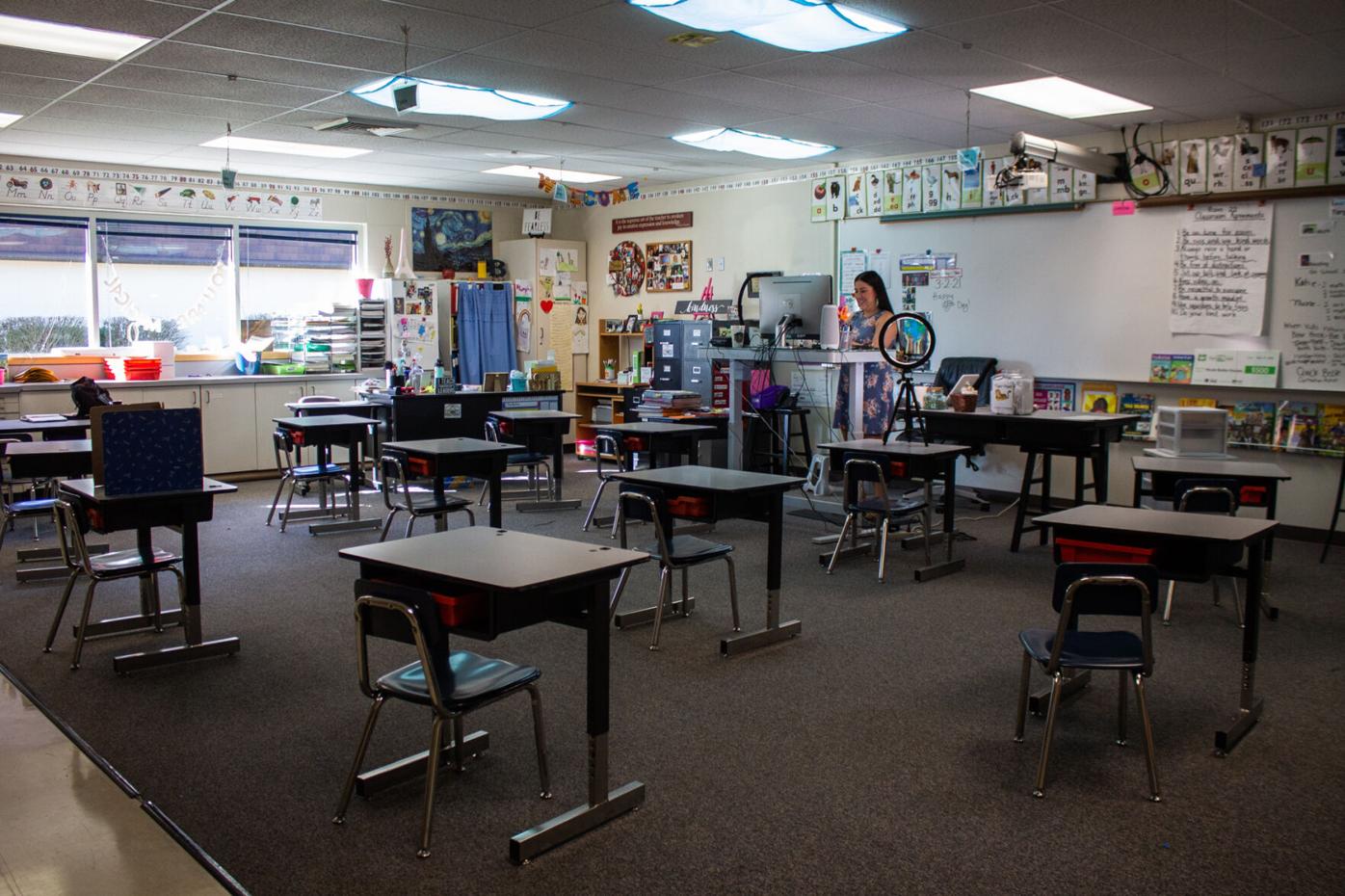 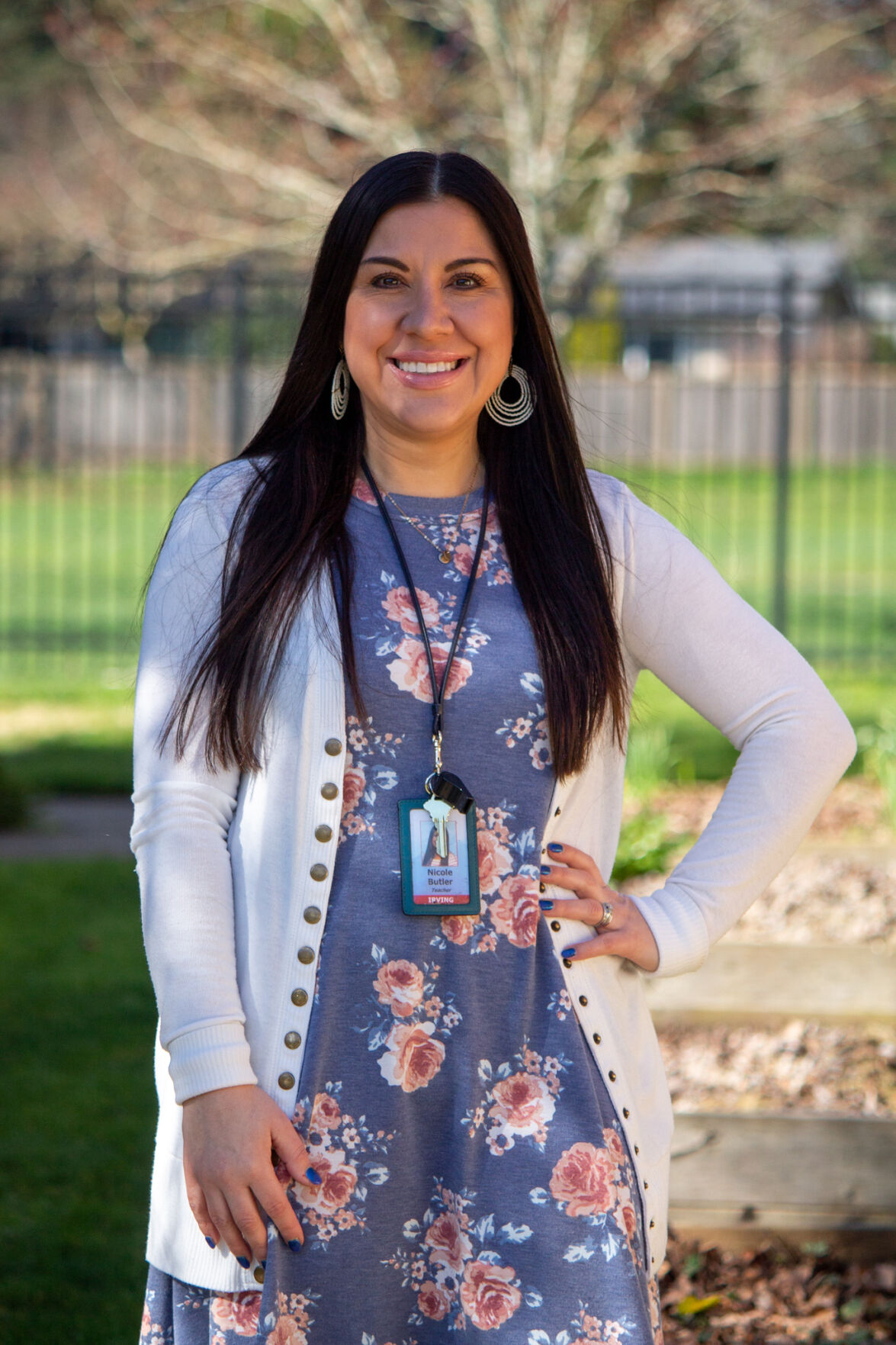 Nicole Butler-Hooten is an enrolled tribal member of the Confederated Tribes of Siletz Indians and the San Carlos Apache Tribe. The passing of Senate Bill 13 has allowed students to become more familiar with the Indigenous people that live in their communities. “My daughter is a fourth-grader learning about the federally recognized tribes, and to see her feel empowered and to see her learn the strength and resiliency of our people is really why we do the work,” Butler-Hooten says. 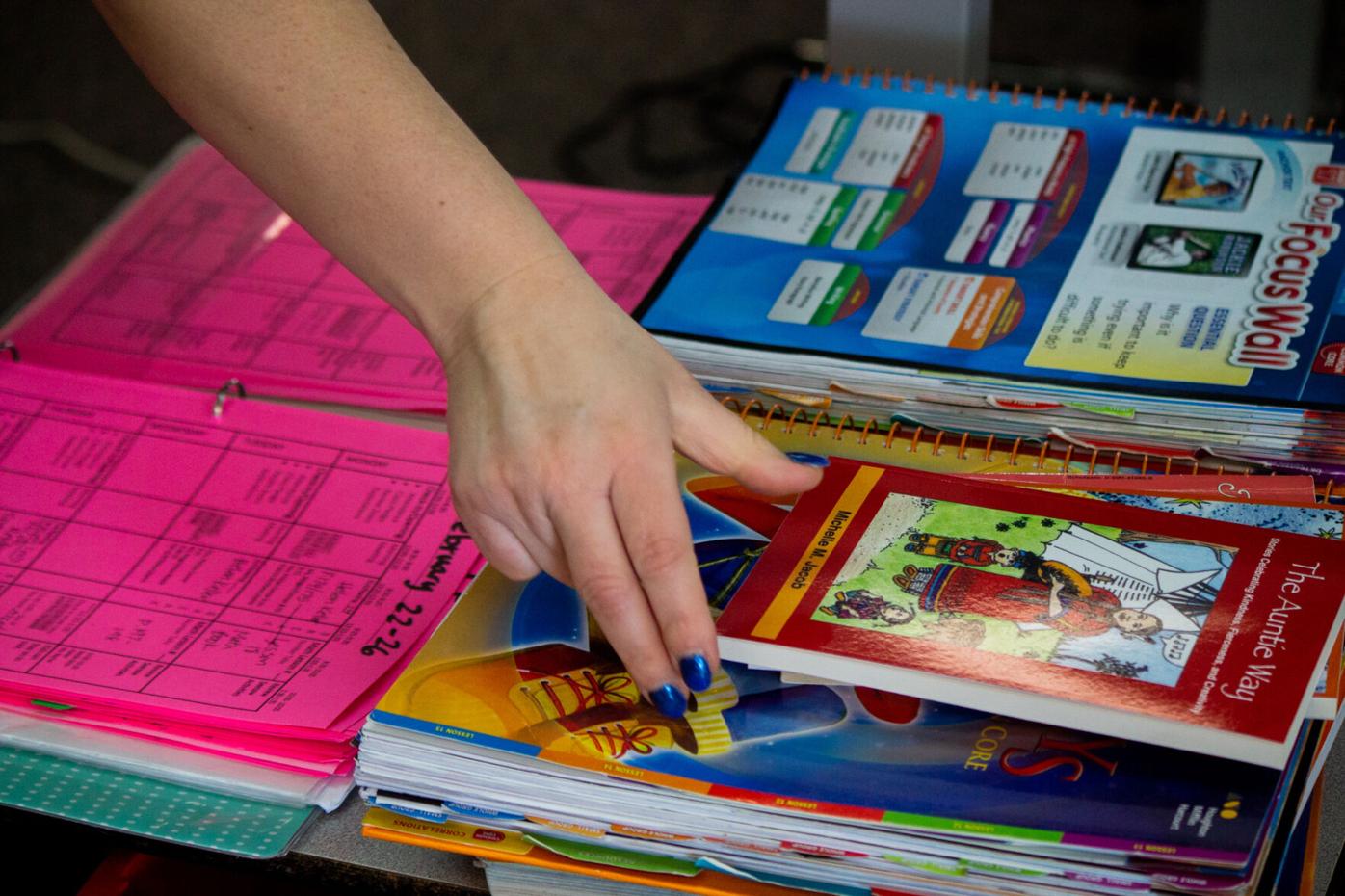 “The Auntie Way,” by Michelle M. Jacob is a book Nicole Butler-Hooten is excited to share with her students about the important role aunts play in Indigenous families. She says she wishes she was taught about the resiliency of Native Americans in grade school, rather than the sad, negative stories often taught in common curriculum. “I never had a teacher stand in front of me and share this rich literature and these experiences and make it more relatable,” Butler-Hooten says. “I had a very watered-down version of everything that happened historically and not a lot about the strength and vibrance.” 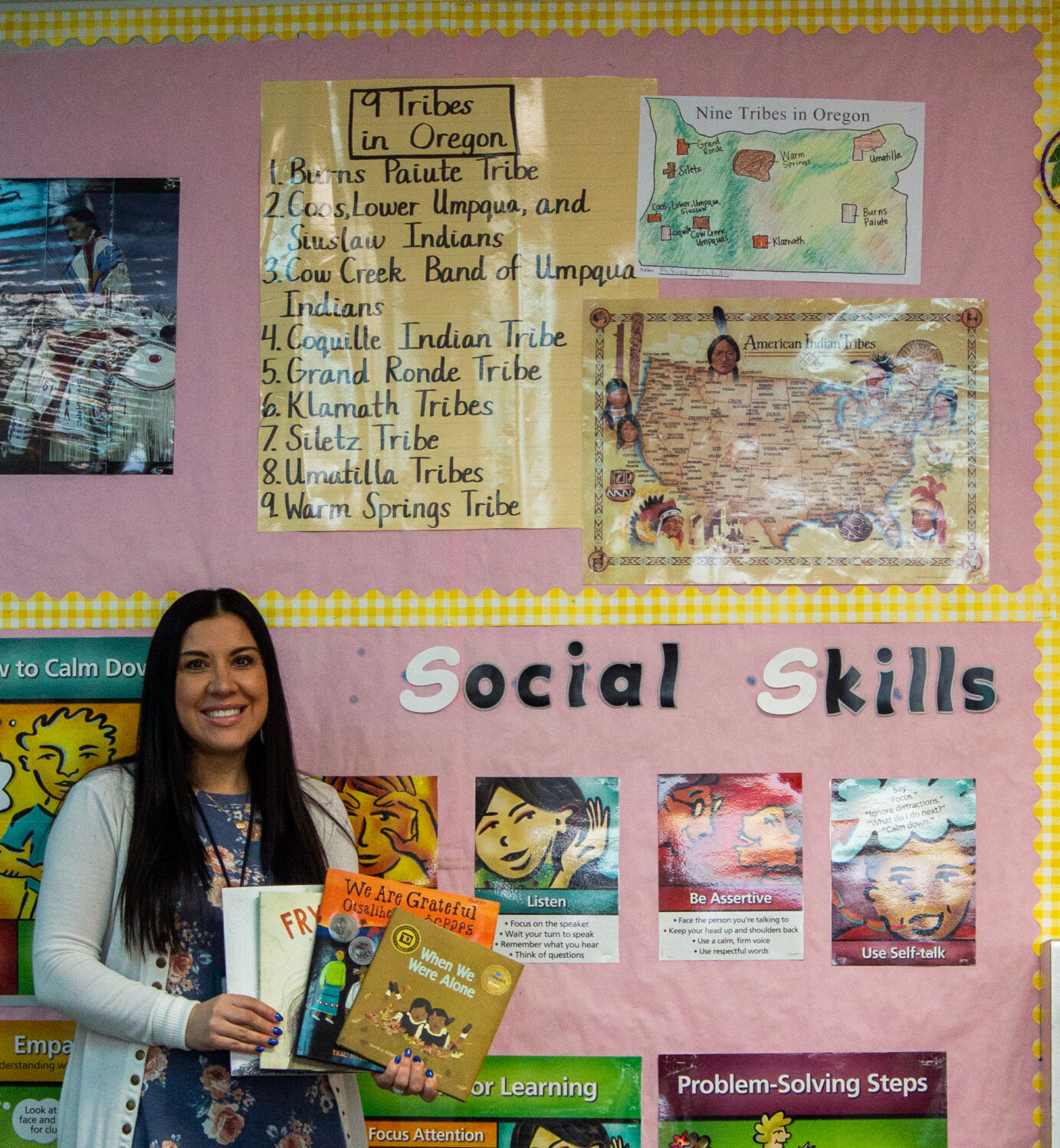 “I've never been afraid to speak up to recognize when maybe my own bias is getting in the way,” says Nicole Butler-Hooten, a second-grade teacher at Irving Elementary. “But really thinking about how do you teach in an anti-biased way with the tools that you have and how do you shape it to your curriculum to match the students that are in front of you? You can't change your students to match the curriculum. You really need to change and shift the curriculum to match your students.”

Second grade teacher Nicole Butler-Hooton begins her yearly Native American unit with a word association exercise. On a whiteboard, she writes the words, “Native American,” “Indian” and “Indigenous people.” She asks her second grade students what images come to mind when they see those words. Together, the class compiles a list.

Each year, students bring up some of the most prominent stereotypes: bow and arrows, long hair, teepees and fighting. After this exercise, Butler-Hooton shares that she is an Indigenous woman herself. She shows the class photos of her grandparents and teaches them a few words in her language, Siletz Dee-ni.

Butler-Hooton is an enrolled tribal member of the Confederated Tribes of Siletz Indians and the San Carlos Apache Tribe. For her, teaching students about tribal culture and history is part of everyday life.

“As a Native community, we are alive. We are resilient,” she says. “That resiliency is what I want to come across in my teaching.”

But growing up in Reedsport, Oregon, Butler-Hooton didn't have any teachers of color. And she says she didn’t embrace who she was until college, where she met teachers like her and discovered programs designed to support Indigenous students. When she began teaching at Irving Elementary School in north Eugene 15 years ago, there were no requirements for teachers to implement Indigenous curriculum in their classrooms.

Butler-Hooton is one of many educators, activists and tribal members who have worked for years to incorporate Indigenous history into their classrooms. In 2017, their work paid off when the  Oregon legislature enacted Senate Bill 13, making Indigenous education mandatory in every K-12 public school district in the state. Now, educators and officials are working together to decolonize the American education system and teach the next generation about Oregon’s tribal history.

During her second year at Irving, Butler-Hooton had a student in class who identified as Native American. She noticed that during class, he would write about his family’s customs, like drumming and beading. She wanted to support her student and the pride he had for his culture. She reached out to his family and began working with them to build a Native American unit.

Together, they organized assemblies for the school with dancing and drumming. The student’s grandfather came in to teach about tribal culture for several years after the student left Butler-Hooton’s class. “This was an organic, unique way for students to feel accepted and for other kids to ask questions and experience excitement in learning about a new culture that was different from their own,” she says.

April Campbell, a member of the Confederated Tribes of the Grand Ronde, was one of just two Native American students in her small Washington school district. She grew up in the 1970s and 1980s when Oregon tribes that were recently terminated, meaning that their tribal governments were longer recognized by the federal government, were working to regain federal recognition. She was the first in her family to graduate high school and college. Now, Campbell is the Director of the Office of Indian Education at the Oregon Department of Education. She says that the lack of support and recognition she received in school is exactly why she is so passionate about SB-13.

Campbell says that a combination of factors led to the passing of SB-13 in 2017. When she started at the Oregon Department of Education in 2013, one of her first tasks was to help revise the Oregon American Indian/Alaska Native Education State Plan. The seventh objective on the plan, which was released in 2015, outlined the beginnings of the bill.

Oregon is only the third state to implement a senate bill that requires tribal education in public schools. In 1999, Montana passed the first bill of its kind to address this gap in curriculum on a state level. In 2015, Washington passed similar legislation. Using the foundation from this state plan, Campbell, her Oregon Department of Education colleagues and tribal members began to lobby for a bill that could be modeled after those in Montana and Washington.

Once the bill was passed, the Oregon Department of Education invited representatives from each of the nine federally recognized tribes in Oregon to create a document called “The Essential Understandings of Native Americans in Oregon.”

“It is a unique feat in itself to have nine nations working on a document,” Campbell says. “That process was beautiful.”

The representatives agreed on nine foundational concepts of tribal history and culture. They outlined tribal governance, languages, sovereignty and current presence in the state. They also addressed Oregon’s genocide of its Indigenous people, federal policies and laws. In June of 2019, the Oregon Department of Education contracted the organization Education Northwest to create lesson plans with guidance from the tribes' Essential Understandings.

With the curriculum completed, the Oregon Department of Education began to plan to implement the curriculum in fourth, eighth and 10th grade classrooms in January of 2020. Despite school shutdowns due to the COVID-19 pandemic, teachers like Jessica Wolpe found ways to adapt the curriculum to their virtual classrooms.

Wolpe, who is a member of the Confederated Tribes of Grand Ronde, immediately incorporated tribal history and culture in her classroom when she began teaching at Pleasant Hill Elementary School in 2013. She found some resources through her tribe’s education program but didn’t have access to the extensive tribal knowledge that’s now available to her with the lesson plans created as part of SB-13.

At the start of the year, she would lead a “cultural suitcase” activity with her students, where she encourages them to share aspects of their culture. Wolpe would show her students moccasins she made with her grandmother.

Wolpe was able to use resources and curriculum created by the Grand Ronde Education Committee for her social studies lessons. She brought her father in to speak about tribal sovereignty. One year, one of her students brought in her regalia to show the class. “I think it's important for kids to see themselves in the classroom and whether they're Native or not,” she says.

With the implementation of SB-13, teachers like Wolpe now have access to 45 lessons about tribes across Oregon. The Oregon Department of Education created an online professional development course for teachers that covers each Essential Understanding and ways to teach the curriculum. These modules are available for native and non-native teachers alike. Wolpe says these modules have been helpful, especially when implementing the curriculum virtually.

Emerie Martin, one of Wolpe’s fourth grade students, admits that before she started learning about Oregon tribes in class, she imagined them wearing feather hats, leather garments and moccasins. “I thought they always looked like that, even nowadays,” she says.

Understanding that many of her students start with these assumptions, Wolpe encourages students to learn about what tribes are like today. “I try to emphasize to kids that Native Americans still live here today. I'm an Indian. I dress like this!” Wolpe laughs, pointing to her casual white top.

This drive to highlight tribal resiliency through education is one of Brenda Lee Brainard’s long-standing goals. She was less than two months old when her tribe — the Confederated Tribes of Coos, Lower Umpqua and Siuslaw Indians —was terminated. She says she remembers reading books in school that described her tribe as “extinct.”

Brainard has been the director of the Eugene 4J Natives Program for almost 30 years. This after-school program offers tutoring services to Indigenous students and assistance with higher education planning. The program also hosts community events, summer camps and classes for the students to learn about different cultural practices.

From Brainard’s perspective, SB-13 is important because it helps non-tribal students understand that tribes still exist. “I don't ever say, ‘We were the aboriginal inhabitants.’ I say, ‘We are the inhabitants,’” Brainard says.

Brainard has spent 20 years creating curriculum on tribal history and culture for teachers in her district. She acknowledges the limitations of the current SB-13 curriculum and hopes that it will expand in scope. She wants to see more lessons on the history of Oregon termination and the tribal activism of the 1970s.

Still, Brainard thinks that SB-13 will help students understand Oregon history in a more accurate and authentic way. “It's not just the right thing to do anymore. It is the law,” she says.

Mackenzie Allison, a junior studying at Lane Community College, participated in the Natives Program for 13 years. Allison says that some of her best memories from childhood came from being a part of the program. She would attend drumming and dance classes after school, and she attended the program’s summer camp for 13 years.

The Natives Program was sometimes her only outlet to feel like she could embrace her history. She has three younger siblings and is happy that tribal history is now incorporated into their classes. “I'm mainly excited that they get to embrace their history without having to do it outside of school like I did,” Allison says.

The Oregon Department of Education is working on building assessments to accompany the curriculum in hopes of tracking the measurable impacts of SB-13. As schools begin to return to fully in-person classes after the coronavirus pandemic, teachers will be able to attend training sessions, have guest speakers and engage in more dynamic conversations with their students.

She wants to see tribal history and culture incorporated into every part of the education system — in math, art and PE — not just through history, science and social studies. She hopes to see each district teach about the Indigenous population in its area, localizing the curriculum to better reflect the local population.

Fasana thinks that the passing of SB-13 will have a positive long-term impact on the relationship between the U.S. government and tribal nations. She hopes that students receiving the SB-13 curriculum now will be better equipped to collaborate with and advocate for Oregon tribes.

“I believe that seven generations from now, education will look different in Oregon because of the work we're doing right now. The acknowledgment of Indigenous people will look very different,” Fasana says. “I won't be here to see that. But I have faith.”