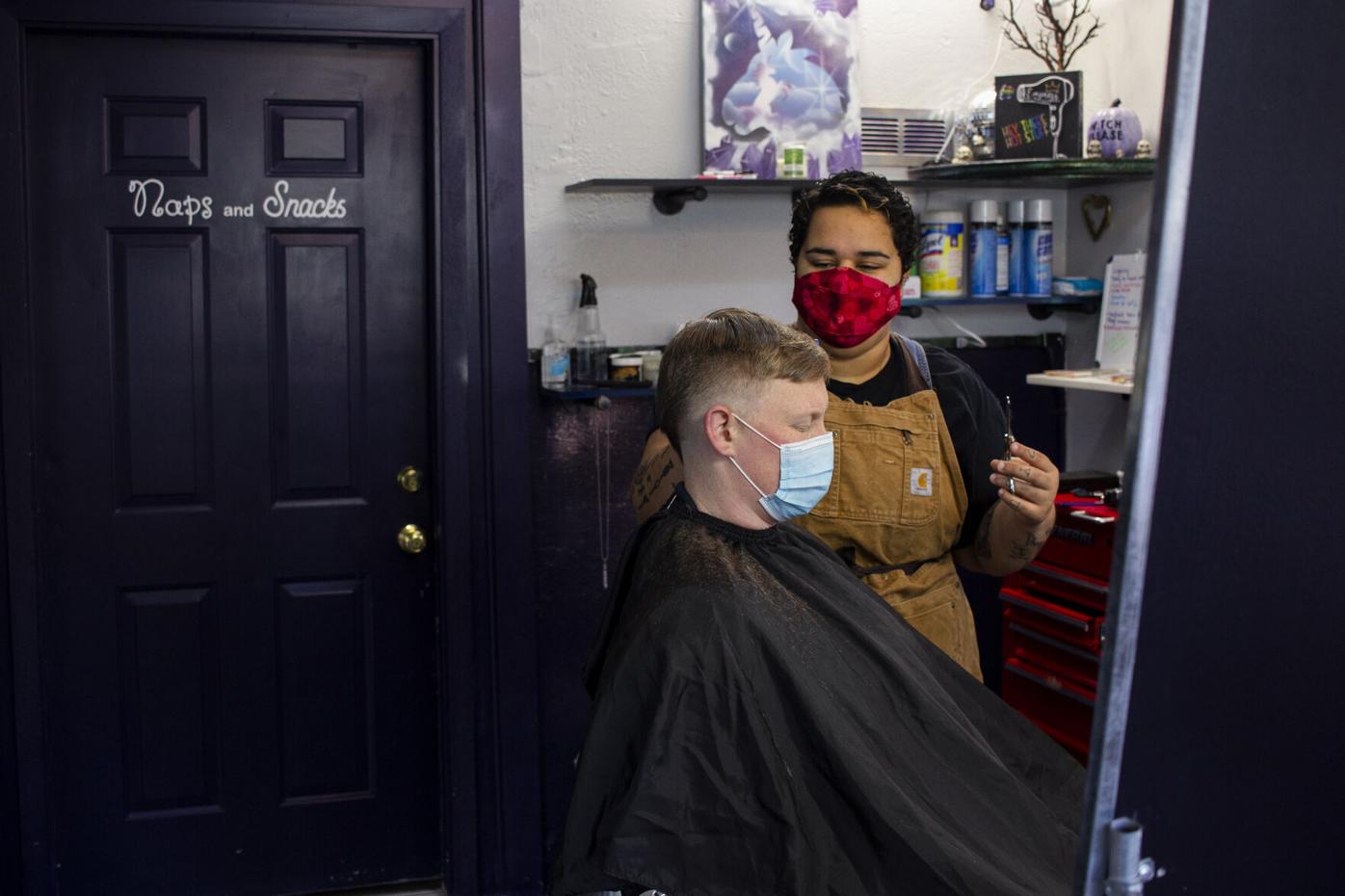 Mercedes Ruby, a barber at Anomaly Hair Collective, says she loves the confidence a haircut can give people. “As soon as I take the cape off, they see themself in their normal clothes and they get kind of peacock-like,” she says. “It makes me happy to make other people happy.” 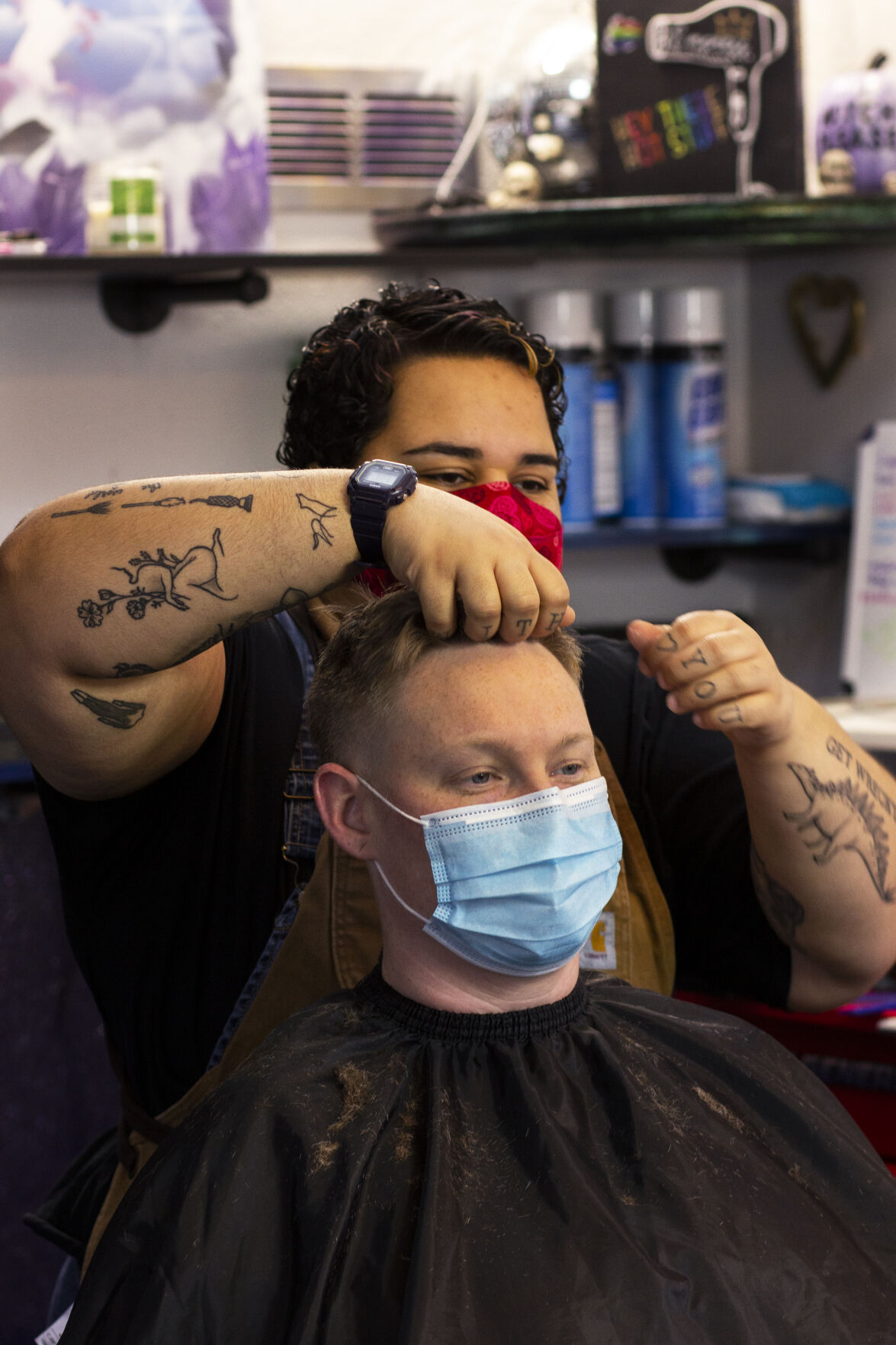 Mercedys Ruby, a barber at Anomaly Hair Collective, cuts her wife Brianne’s hair on a Sunday afternoon. Ruby says her first introduction to hair styling occurred about a year ago after watching a 20-minute YouTube tutorial to trim Brianne’s hair. She applied to beauty school soon after that. “I know Bri is going to be happy with just about anything,” Ruby says. “So there’s no pressure, and I get to grow my creativity with her.” 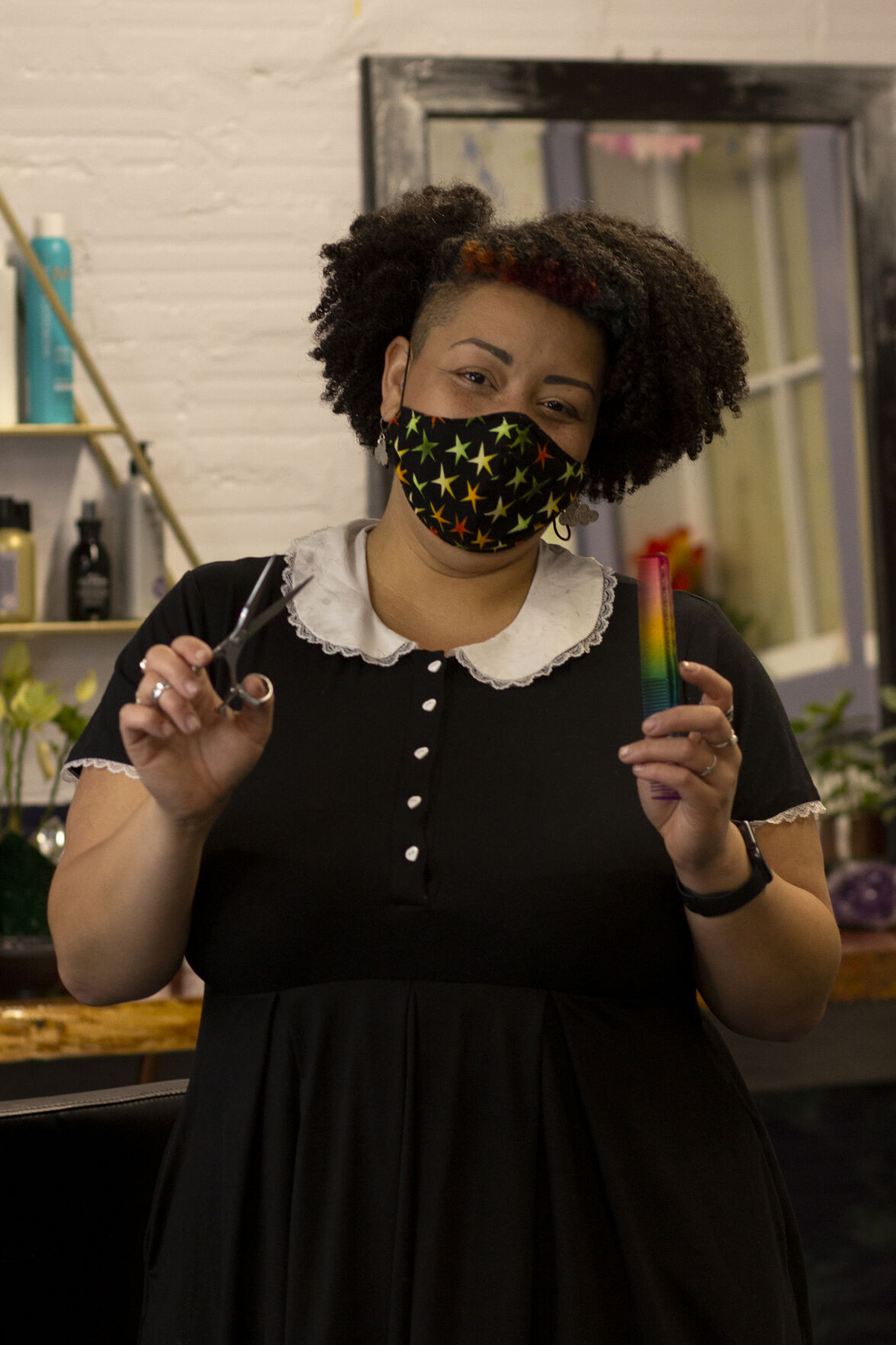 Megan Edmond has been working at Anomaly since October 2020. “It's like my best life ever,” Edmond says. “I feel like we have such a tight little family and it’s only been so many months.” 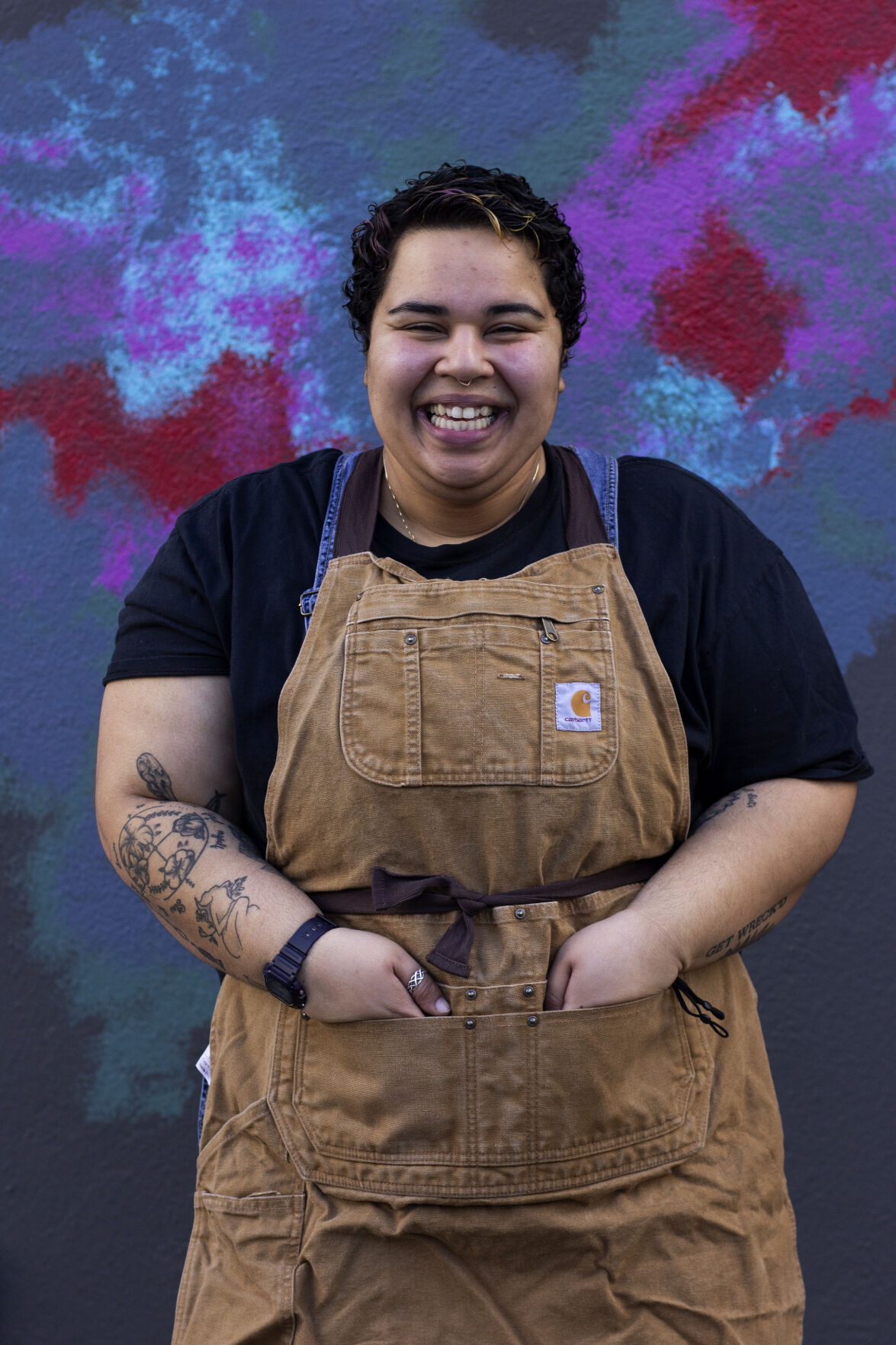 “Anomaly was a complete 180 from what I thought it was going to be,” Ruby says. “Everyone is so kind and welcoming and wants to help.”

At Anomaly Hair Collective, rainbow paint splatters the art-covered walls, plants hang in the corners and music rings out through the speakers. Wearing a pink mask embroidered with the image of a Black woman holding a pride flag and roundhouse kicking Donald Trump, Mercedys Ruby fits right in with Anomaly’s colorful atmosphere.

Ruby got hired at the studio in July of 2020, just after their reopening from the initial pandemic shutdown in Oregon. She says the studio has allowed her to follow both her creative and humanitarian passions, and that her work as a barber has given her meaningful connections to Eugene and the queer community.

Anomaly is creating a safe space for Eugene’s queer community within an industry historically reliant on gender norms. People who have gender non-conforming identities or hairstyles say that traditional hair salons and barbershops make them feel excluded, which is why places like Anomaly are important for creating more inclusive hair studios. While there are some non-gendered hair studios in other parts of the country like Los Angeles and Portland, they are rare compared to the volume of traditional shops, and Anomaly is the only independently owned queer barbershop in Eugene.

“My dream was to open an inclusive, queer hair studio that was more centered around the experience of walking into a place and feeling okay,” says Jordin McDowell, the owner of Anomaly, who identifies as queer. “Salons and barbershops are usually different things. I didn’t want any of that. I wanted to be focused on the individual, the hair they wanted and for them to feel safe.”

McDowell prefers the term “studio” for Anomaly since it functions as both a barbershop and a salon. Typically, the two are separate: barbershops for men and masculine cuts, salons for women and longer hairstyles. Combining them keeps labels and exclusivity out of the studio, in hopes that people with any gender identity or desired style will feel accepted at Anomaly, no matter how “unconventional” their look may be.

McDowell says he had a feeling Ruby would be perfect for Anomaly based on what he’d heard about her from his clients and from what he saw her post online. He left supportive comments on her social media posts about her struggles in beauty school, letting her know that he understood how difficult the environment could be.

Ruby was inspired to start beauty school after cutting her wife’s hair for the first time, wanting to save money and avoid uncomfortable encounters in barbershops, which Ruby’s wife experienced in the past. The haircut went really well, but beauty school proved to be a bigger challenge than she expected.

As the only Black, queer woman barber in her class, Ruby felt isolated as she watched her peers relate to each other in ways she could not. By the end of her year in the barber program, she says it was hard to find the motivation to get through the 10-hour workdays with her classmates.

“Beauty school was horrific,” Ruby says. “I was the only woman barber in a sea of very toxic-masculinity alpha males.”

Classroom supplies were limited, and Ruby says she would always get stuck with the worst equipment, forced to pick last out of her peers. They would also take educational trips to local barbershops outside of class, but Ruby was never invited. She says since she didn’t grow up going to barbershops, which traditionally catered to men, she didn’t have access to the same connections as her classmates, and that those trips could have helped her gain knowledge about the local industry and barbers.

A friend saw Ruby struggling and introduced her to McDowell in hopes he could offer her the support she was missing. They arranged for Ruby to come shadow McDowell and see what a day looked like in an actual studio. The day went smoothly and the two kept in touch while Ruby finished beauty school. Just three days after she was officially licensed, McDowell hired her.

“The moment she walked in, I was like, ‘Yup, you are the sweetest, most ambitious person,’” McDowell says. “You know when you meet someone and they’re just so willing and eager to learn and grow?”

Hales Wilson, the coordinator for University of Oregon’s LGBT+ Education Support Services, says they can see how a hair studio like Anomaly can become a safe space for people in the queer community, and why the employees there can serve a unique, supportive role in the community. Wilson uses they/them pronouns.

“Getting your hair cut is really vulnerable,” Wilson says. “Someone else is altering something very physical about yourself that’s tied to confidence, self-image and how you move through the world.”

Wilson helps students navigate identity crises and coming out while also providing educational and support resources for queer UO students and faculty. They’ve gotten their hair cut by McDowell before, and the two stay in touch.

Wilson says they have noticed that queer students with a sense of safety and security are more likely to experiment with their looks and gender expression, as those looks can function as a signal to others that they are members of the queer community. The actual experience of changing those looks can be just as impactful as the looks themselves, which is why Anomaly is focused on making the studio feel comfortable and accepting.

“It can feel quite scary to go against gender norms,” Wilson says. “But when folks have the support and space that they need to be able to explore their identity, there can be so much more expression and beauty that comes from it.”

Chianti Dixon, one of Ruby’s first clients at Anomaly and one of Ruby’s good friends, says she’s very thankful for the welcoming space Anomaly has built.

When Dixon first had her hair cut short, soon after coming out as lesbian, she says she could tell the stylists at the white-dominated, traditional barbershops she went to had never done a masculine cut on a woman, let alone on someone with tight curls. Curly hair looks a lot longer when wet, and Dixon says the hairdressers didn’t account for her unique curl pattern or shrinkage. Dixon says she “literally looked like a poodle” because the hair was cut way too short. What was supposed to be an exciting, freeing change left Dixon unsure of herself.

Because there are three women of color work at Anomaly and two of them are curl specialists, Dixon says she always leaves feeling confident.

“They’re always playing good music and laughing. It’s just more personable,” Dixon says. “I feel more like I’m hanging out with them, where other places I’ve gone have been really standoffish.”

Megan Edmond, a hairstylist at Anomaly, says she and the rest of her coworkers try to do little things to help their clients where they can. If a client mentions they haven’t eaten, she’ll search in the back for snacks. When one client vented about their niece being mistreated by the rest of the family for coming out as trans, Edmond asked one of her regulars, an LGBTQ+ focused therapist, for resources she could pass along to the niece. The studio also occasionally opens on holidays to provide food and a movie for queer people who may not have a family they can celebrate with.

Through Anomaly, Ruby says she gets to meet a wide spectrum of the community that she normally wouldn’t have the opportunity to work with. She was especially surprised by the number of little kids’ haircuts she gets to do and how many families come through Anomaly with multiple or all members identifying as part of the queer community. Seeing parents let their kids do what they want and not worry about gender labels or aesthetic norms makes Ruby really excited and proud of Eugene’s queer community.

“Nine out of 10 times, the people that come in are so excited to be there and a part of our little community,” Ruby says. “It’s a really incredibly supportive group. We love to take care of each other.”

Chelsea Pitarresi writes stories that focus on local culture and building community. When she's not writing, you can find her hiking, bingeing shows with her roommates and slowly working through the pile of books on her bedroom floor.