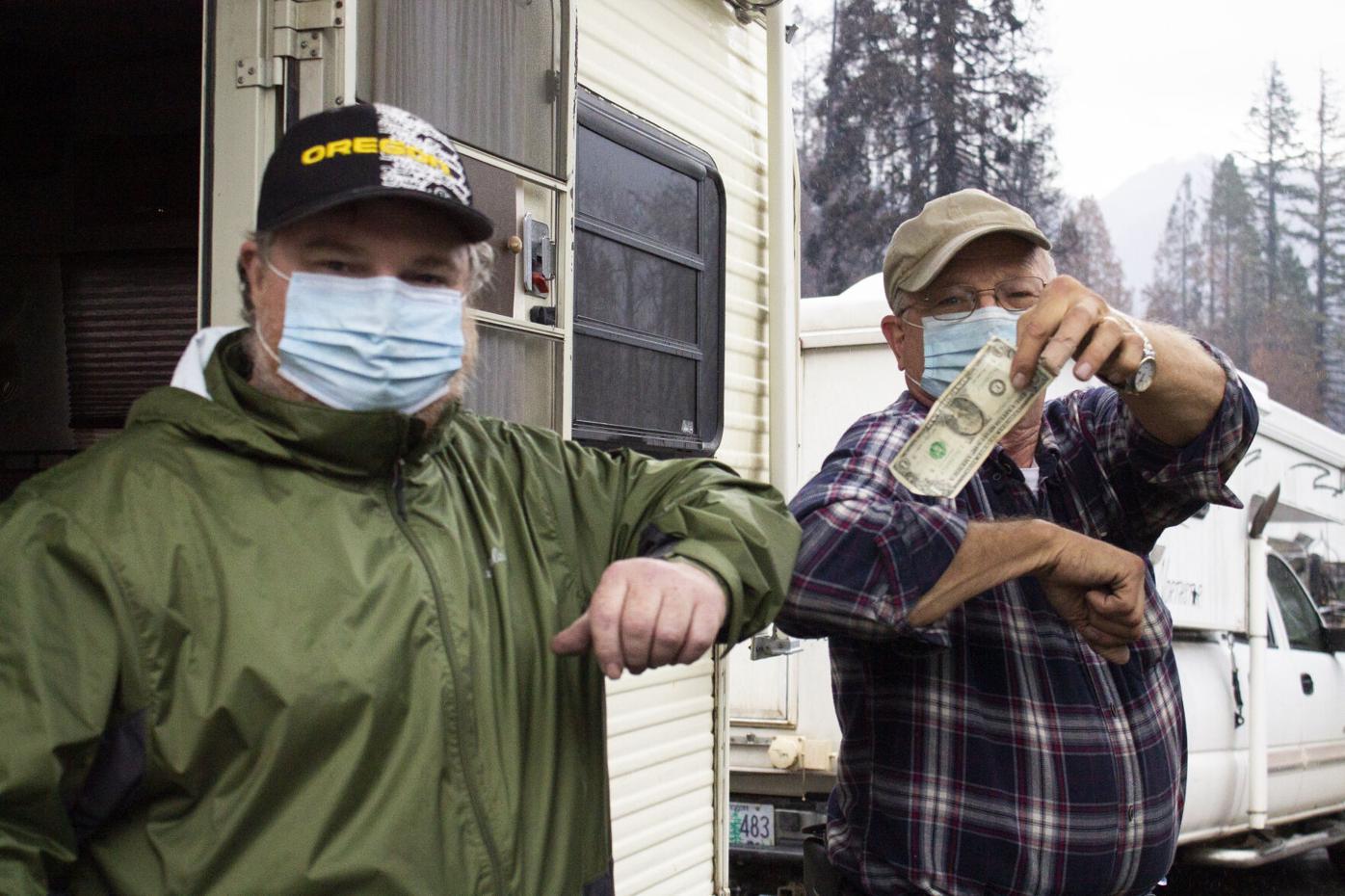 The 5110 District Rotary club donates a trailer to Antony Abel (left), through a member who wishes to remain anonymous. Abel lost his home in the fire along with his glass shop business, Abelglass Studio. The Rotary Club hopes to coordinate ways to get temporary housing for those affected by the fires while they rebuild their lives. “These guys drove this out here, delivered it, went the extra mile to make sure things were working, brought me a fridge because the fridge didn’t work, extra lights,” Abel says. “He thought of little things, wasn’t just trying to dump an RV off on me.” 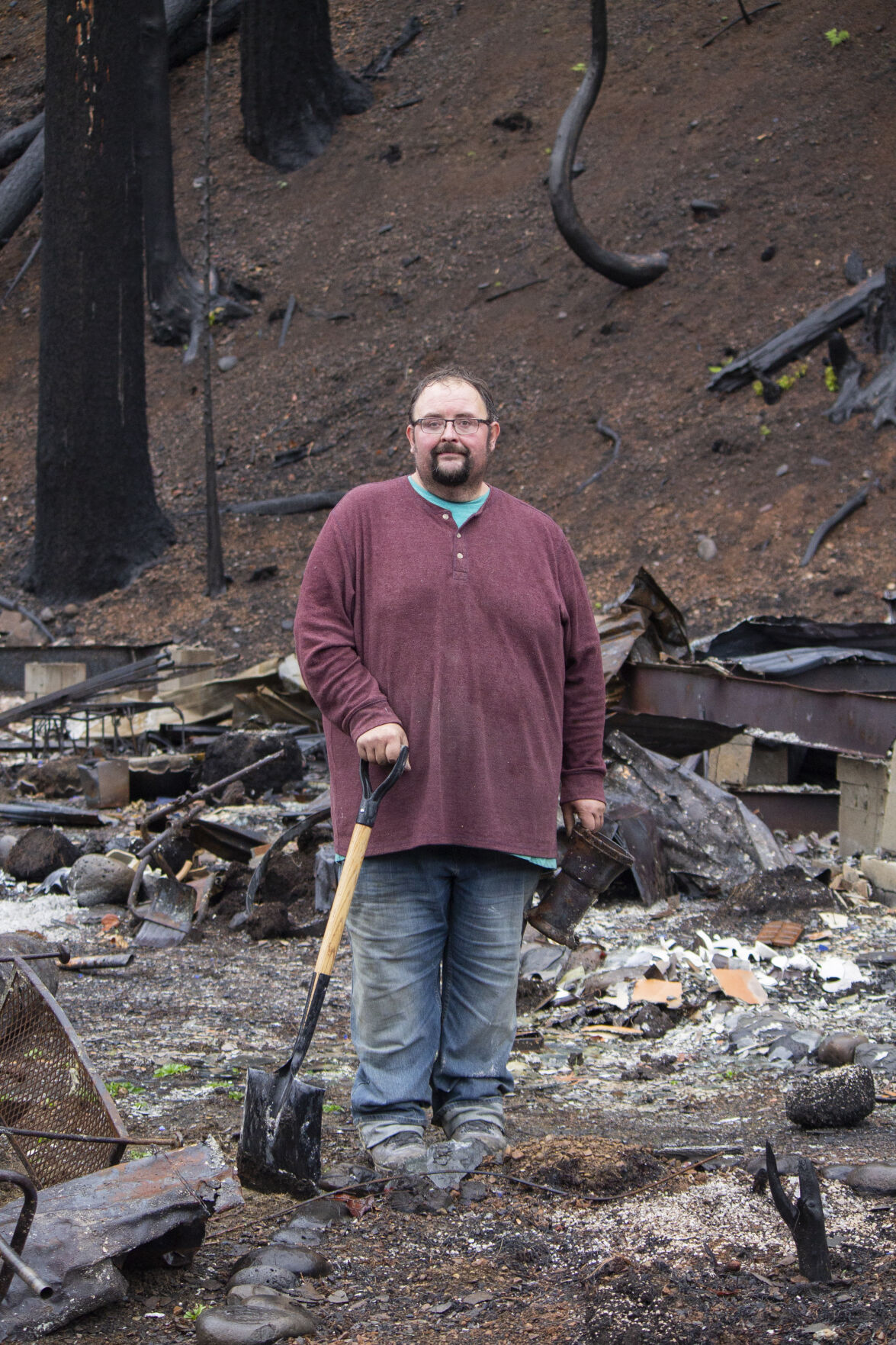 Eric Journey returns to his property for the last time to find anything he could salvage from his home. Journey lived here for seven years and put a lot of love into his home. “The yard looked like something out of a magazine,” he says. “I had a koi pond over there, a fountain in the corner up there. Never in my wildest dreams did I think a fire was coming through.” 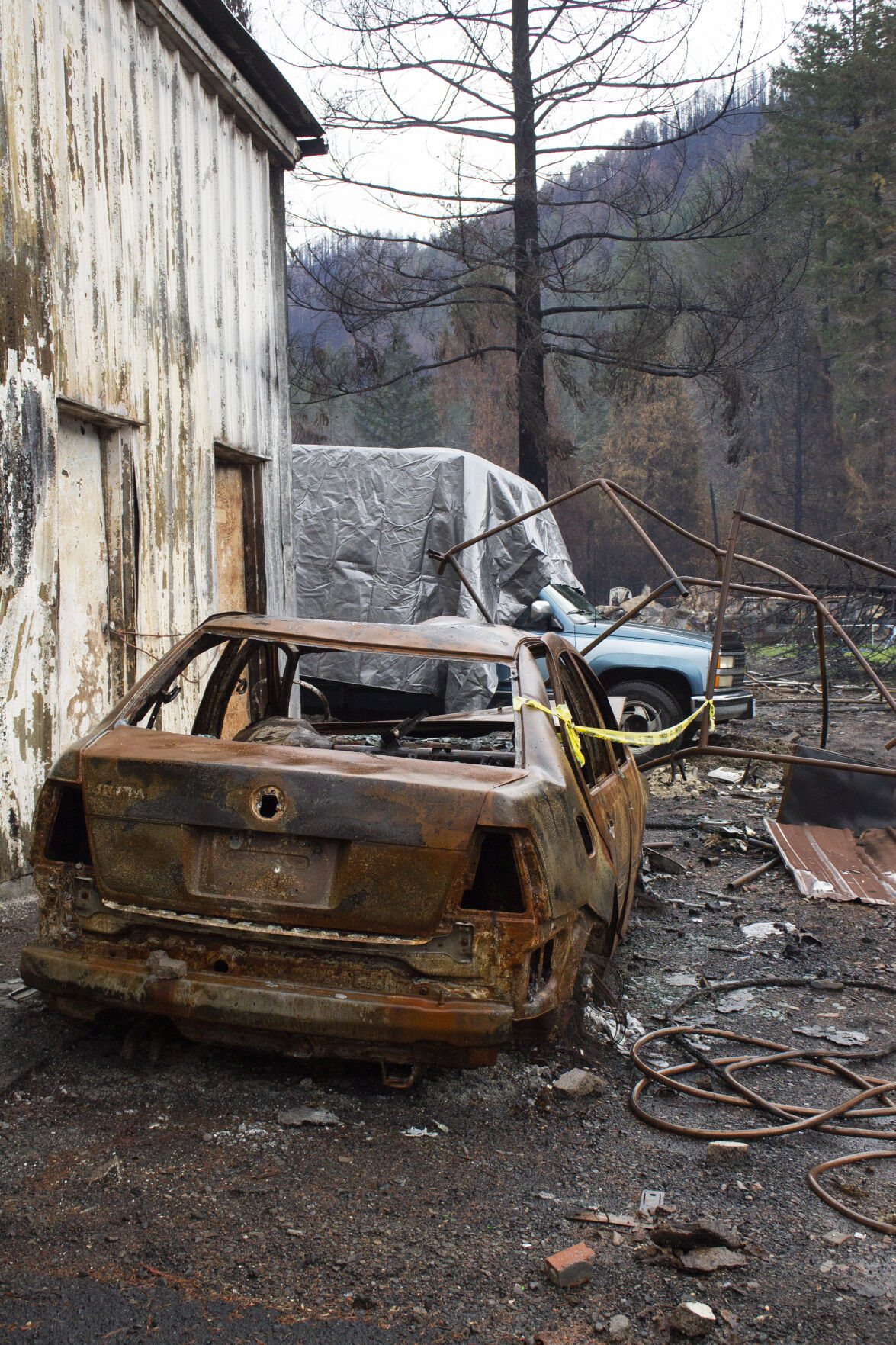 Many vehicles were left behind and burned in the fire, since most households only had the time to grab one vehicle while evacuating. Abel had to leave behind his Volkswagen Jetta, his daily car, and his Ford Mustang.

Abel and his dog, Lucky, were able to evacuate safely from the fire. “We got a Level 1 warning and started kind of just getting a day pack ready. Before I knew it, it was Level 3,” Abel says. “I loaded up the dog, I had my Volkswagen van, and I had the day pack and I looked out there and could see the fire.”

Antony Abel peers through the shattered windows of what was once his glass studio, Abelglass Studio. A few months ago, it was full of the beautiful glass ornaments, beads and pendants Abel sold to make a living. What remains today bears no resemblance to its former glory. The ground is covered with black and gray soot. Deformed objects clutter the ground, their identities and character incinerated. A scent of char lingers inside.

Abel walks to the south side of his shop, carefully stepping around old nails and debris on the ground. His old Volkswagen Jetta rests there. The tires are completely melted away, and the body is now a frightening shade of burnt orange. On the trunk, the first three letters of “Jetta” are barely distinguishable.

Across the street at the general store, the plastic from the old sign droops below its frame, melted to a point of no return. Abel remembers how the general store was a gathering place for residents.

This haunting scene is the result of the Holiday Farm Fire. Blue River, the once inviting community that surrounded Abel’s shop, is now a wasteland.

The blaze ripped through Blue River shortly after it started on Sept. 7 and proceeded to burn over 173,000 acres of western Oregon over the next seven weeks. Many residents of the McKenzie River corridor were left with nothing. But Blue River residents aren’t giving up on their town. They are relying on the strength and resilience of their community — as well as a little outside help — to rebuild what they had.

On the evening of Sept. 7, the power in Blue River went out at about 8:30 p.m. People in the area received a Level 1 fire warning, which told residents to be ready to evacuate. At 11:45 p.m., the warning jumped to Level 3, which meant, “leave immediately.” Abel grabbed a few essentials, got in his Volkswagen van and called his dog, Lucky, to load up.

This hillside is only a few hundred yards to the south of Abel’s house. Fortunately, Abel escaped to Highway 126 before trees fell and blocked the road. Others who lived farther from the highway were forced to drive over logs in the road to reach safety.

“The power went out, so people were sleeping,” Abel says. “We’re used to the power going out here, so we went to bed. Some people had to be woken up by the sheriffs.”

Just up the road, Erik Journey, resident of the Lazy Days Mobile Home and RV Park in Blue River, had a similar apocalyptic experience. He describes it as the scariest moment of his life. The fire shot ahead of him and seemed to be moving faster than he could drive.

“Suddenly, there was a glow straight across the river,” Journey says. “It looked like a meteor shower with burning embers flying over.”

Amidst the chaos, Abel and the other residents fled to Eugene, where most still live at a Holiday Inn through the American Red Cross Shelter. They lived there while the fire burned. Once the fire was contained, Abel returned to assess the damage.

“Your life is changed in a matter of hours,” Abel says. “You come back and realize you don’t have a home, a business or the day-to-day things I use and need. That’s when the community was so amazing. They set up the relief centers, so we could have those things.”

Most of the residents are still at the Holiday Inn with nowhere else to turn. However, the Rotary Club of Bend, Mt. Bachelor is working to get more RVs to donate to Blue River residents so they can return home. But, they are also engaged in an effort to replace tools lost in the fire so people can get back to work.

Rotary District Governor Cindi O’Neil leads the effort. Recently, she directed a similar program for survivors of the Echo Mountain fire in Lincoln County. There, 51 people received $650 for buying tools necessary for their various trades and for the essential items needed to get back to normal life. The Rotary is currently executing something similar for the residents of Blue River if possible.

Seeds of hope are growing thanks to the members of the Rotary Club of Bend, Mt Bachelor. On Nov. 17, the club sold Abel an RV — for only a dollar. Two Rotarians delivered the RV, which is now parked outside what remains of his glass shop where he plans to live while he helps with the cleanup and rebuilding effort.

The fire rendered Abel’s glass shop useless, but the shop was the only building left standing on main street. Abel is one of the first people to return to Blue River, where he protected the shop from looters. He’s also running a tool library, funded by Timber Unity, as more people return to the town. Right now, Abel has several chainsaws for tree cleanup, a power washer for ash and debris plus saws and drills. As the tool library grows, they will be free to use for the community.

“It’s a strong community,” Abel says. “You can’t just run to town, so we always helped each other. Now, that’s even more needed.”

In such a small community, everyone relies on their neighbors. Across the street from Abel’s glass shop is Melanie Stanley’s general store, where people used to gather on the long bench outside. Her house is directly behind the store. Both buildings burned down.

Stanley earned the title of “unofficial mayor” after living in the town for 28 years. She leads the Fourth of July celebrations, trick or treat events and the lighting of the Blue River bridge around Christmastime. When someone needs something, she’s there to help.

“The McKenzie is where I got most of my roots,” Stanley says. “I don’t know if I fit anywhere else. It’s where I graduated high school, where I’ve met all of my friends and where I have most of my family.”

Stanley is living in the Holiday Inn with most of the other Blue River residents but plans to return within the next month. Her bond to the McKenzie River drives her goal to rebuild the town. Returning to live in a scorched town isn’t an easy decision. For many Blue River residents, the costs of returning didn’t make financial sense. But Stanley’s loyalty to Blue River overshadowed her own financial risks.

“Two days afterward, when people said ‘What are you doing next?’ we said, ‘We’re rebuilding the store and I’ll rebuild the house, and I’ll be home soon,” Stanley says.

Before the fires, Stanley would frequently borrow tools from Abel when she needed them for the store. When the need for a “tool librarian” came along, Stanley knew Abel was the perfect man for the job. She also nominated Abel to the Rotary Club as the recipient of the first RV.

The Rotary Club hopes to give away more RVs soon, and it’s much needed. According to Stanley, some residents have received support from the Federal Emergency Management Agency while others are still trying to apply for assistance. Those who haven’t received money are struggling to prove residency after their possessions and documentation were burned in the fire. According to FEMA, over $28 million was approved for fire relief in Oregon.

For some, returning to Blue River isn’t the best option. According to Stanley, the older residents in their 60s and 70s were mostly insured, but rebuilding would take too much time and effort. They will either sell this land or give it to younger family members. Stanley says the scorched land will sell for less than it would have before the fires, giving younger buyers and first-time property owners an opportunity to start a life in Blue River. People who previously rented Blue River property now have a better chance to buy something to build on.

Stanley hopes this potential influx of youth will revitalize the town not just to its previous standing but will also improve on what they had before. Previously, several commercial properties in the middle of town were vacant. Her main goal is to rebuild the community on main street while filling previously vacant spaces with attractive businesses for tourists.

Abel is already starting a new glass shop in a trailer next door to his new one so he can continue to make money while he runs the tool library. As for his new RV, he is happy to be home and have some sense of normalcy. Before they left, the Rotarians fixed up the RV by installing a new refrigerator and new lights. Abel recognized the compassion of the people engaged in the relief effort.

“That’s been the best part of this: the humanity that people have brought to it,” Abel says. “You just saw people helping each other. It really touched me to see this.”