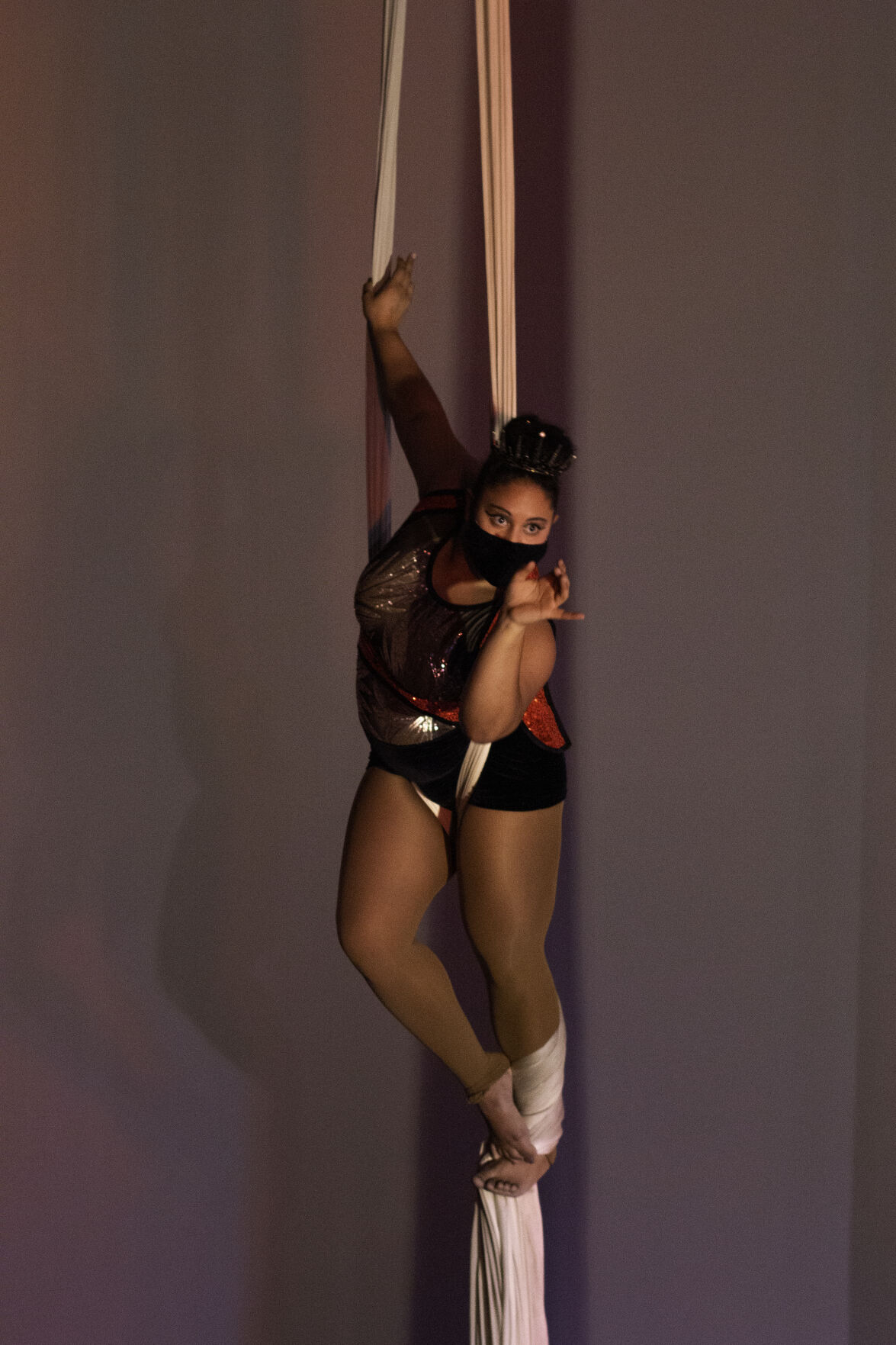 Melissa Barnes, the ringmaster in the Reveler’s circus themed performance, puts on an act for the audience before executing a single leg Georgia twist into a double angel drop. 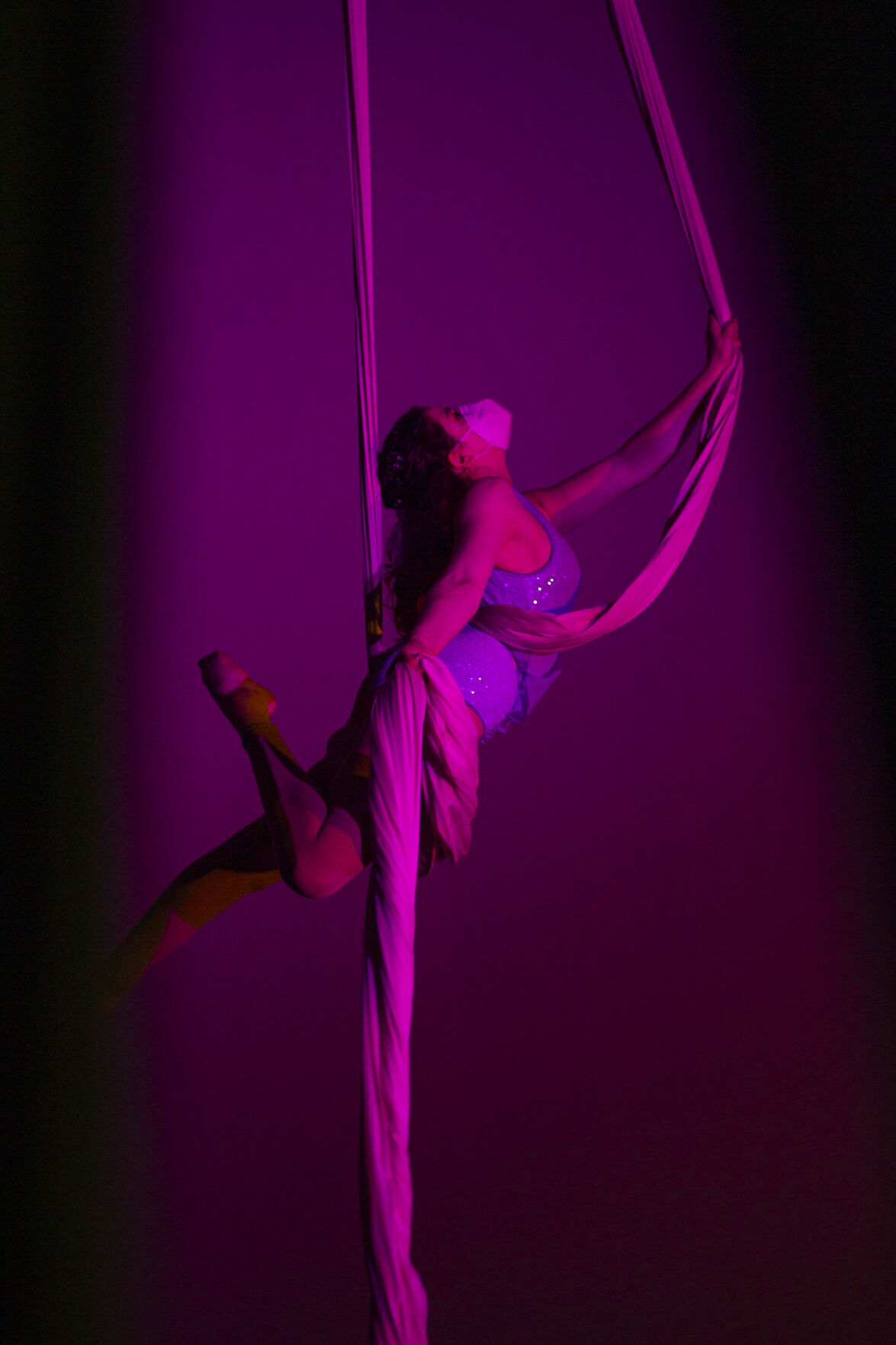 Phoebe Jerome, one of the leading roles in the Reveler Aerial Works performance, suspends herself from aerial silks. Jerome joined the Reveler’s around two years ago. 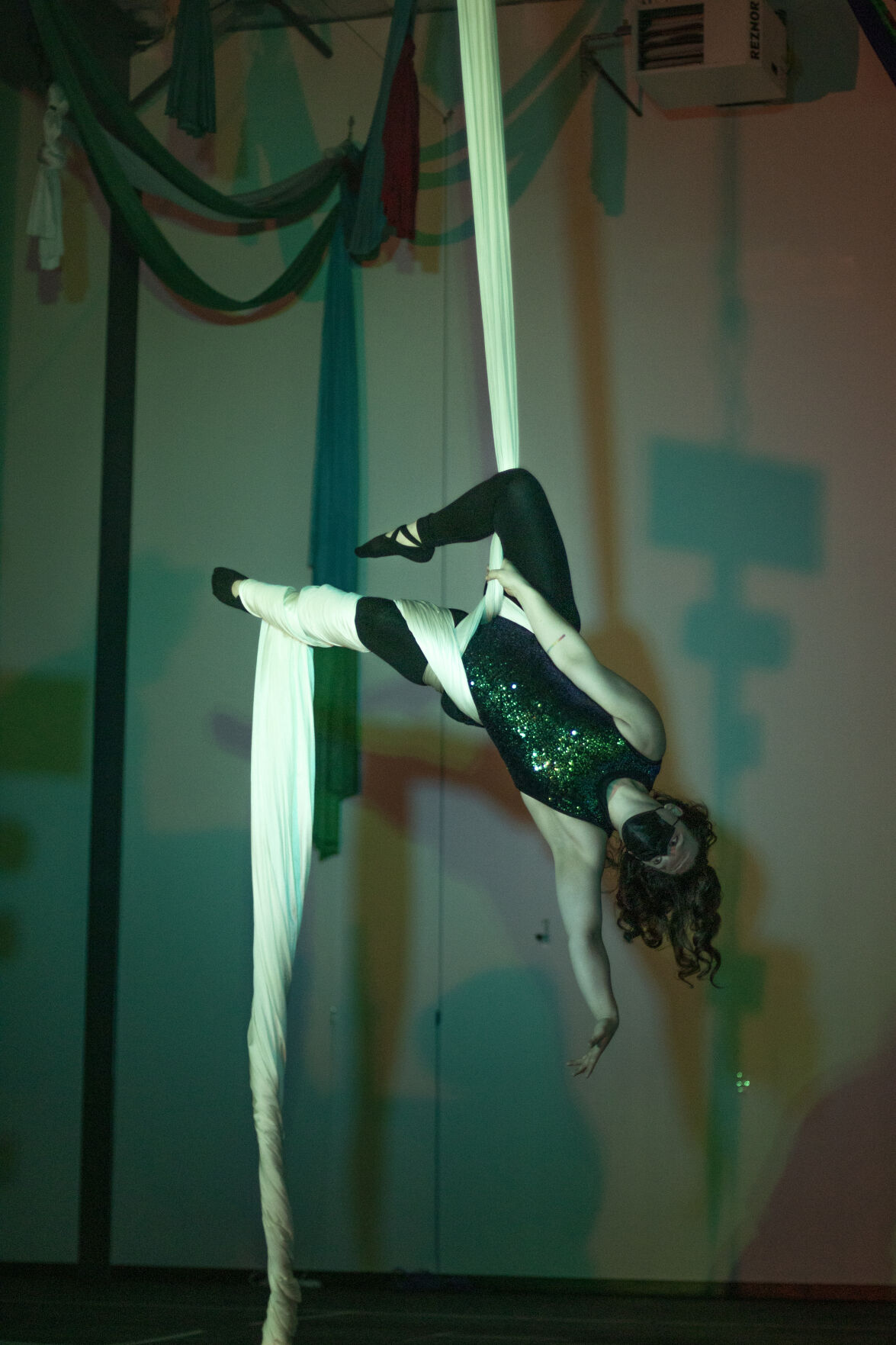 Sally Brewer, founder of the Reveler Aerial Works, performs during the opening piece of the Reveler’s show. Brewer has been doing aerial arts for over 5 years. 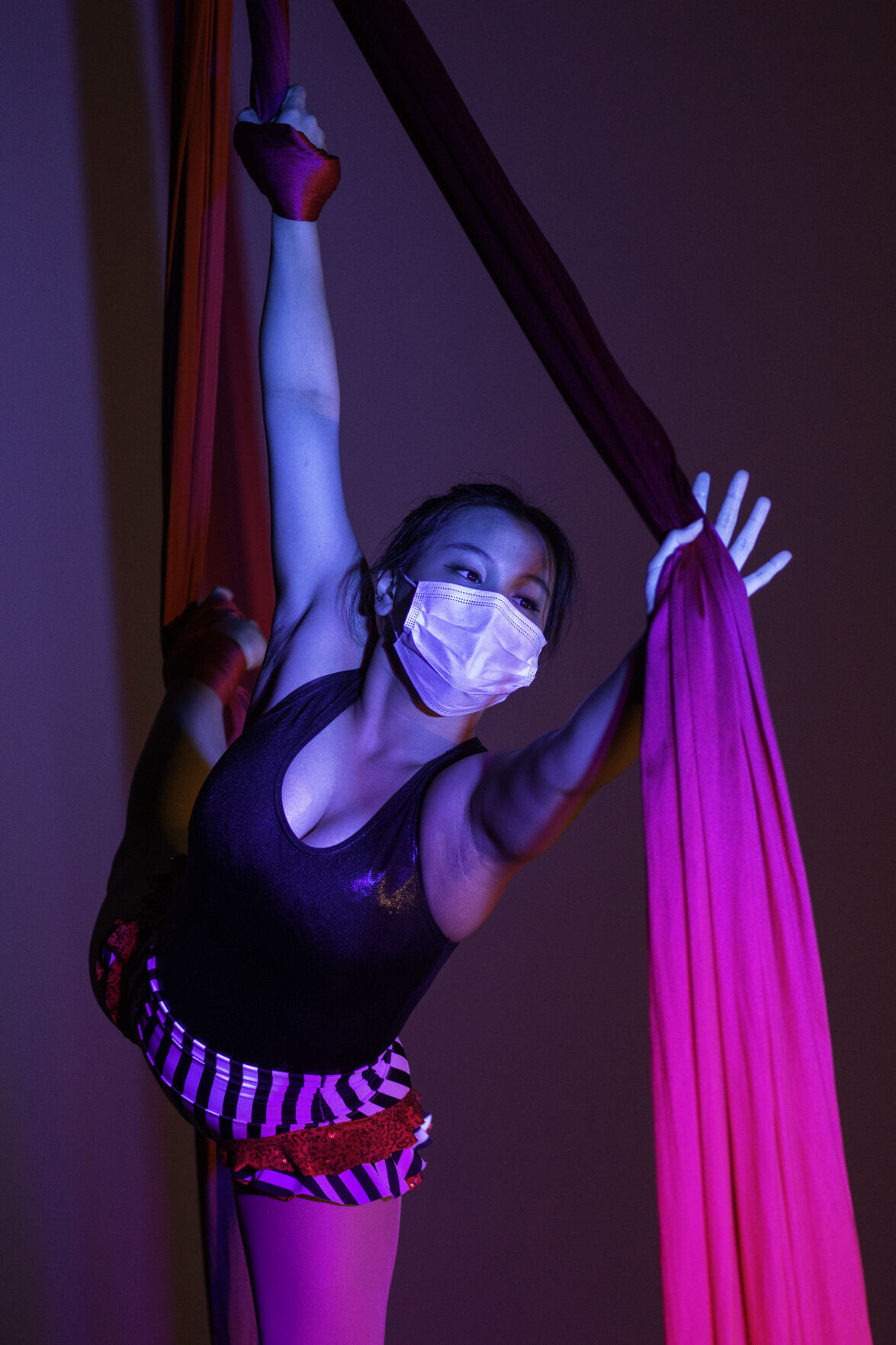 Sakurako Marcello, known as Rocky, holds a wrist belay while doing a split pose, or kite. Rocky joined the Revelers after taking aerial classes in Japan. 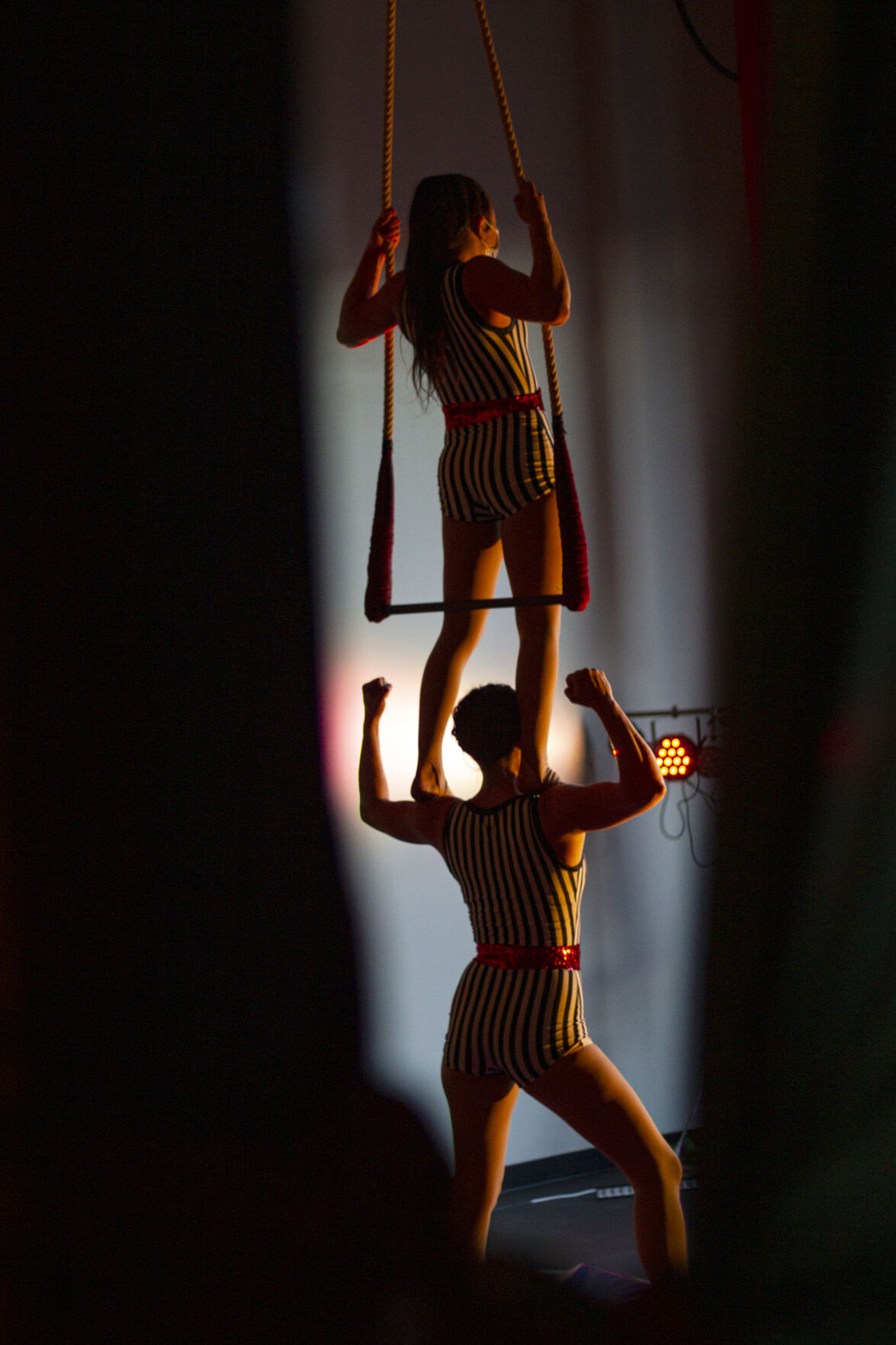 Zoe Garcia (top), and Laura Shirtcliff (bottom), act as strong women on a trapeze during the Reveler’s performance on Friday, May 21.

Melissa Barnes, the ringmaster in the Reveler’s circus themed performance, puts on an act for the audience before executing a single leg Georgia twist into a double angel drop.

Sally Brewer, founder of the Reveler Aerial Works, performs during the opening piece of the Reveler’s show. Brewer has been doing aerial arts for over 5 years.

Zoe Garcia (top), and Laura Shirtcliff (bottom), act as strong women on a trapeze during the Reveler’s performance on Friday, May 21.

Sally Brewer pulled herself up a swath of ivory-colored silks with her arms and wrapped the silks around her legs to keep her secure. She hung 15 feet above the ground for a moment, then let herself fall. Brewer tumbled downward, the silks whirling around her before becoming suddenly taut as they caught her just a couple of feet above the concrete floor. Brewer finished the performance with the extension of a single arm and pointed toes.

Brewer is the owner and primary instructor at Revelers Aerial Works in Eugene, Oregon. The studio celebrated its grand opening in April of 2020, right as the COVID-19 pandemic started in Oregon. Despite restrictions, the shop continued to hold virtual events to captivate audiences throughout the year.

Like the aerial, Lyra and trapeze arts found at Reveler’s, circus art is a rich part of American history. The art has changed alongside cultural expectations, according to Brewer, and is now making its resurgence as a pathway for body positivity.

Brewer and Revelers Aerial Works in Eugene strive to make circus art inclusive and positive by encouraging people of all ages and body types to get involved in circus performances. This is a stark contrast from the ableist traditions the artform is known for partially due to famous figures like P.T. Barnum, who admitted to exploiting disabled individuals for profit in his autobiography, “Barnum’s Own Story.” Circus is now changing from its darker origins of exploiting disabled bodies, animals and unregulated dangerous stunts to a family-friendly and body-positive artform.

Circus has similar characteristics to theater performance or dance, except its storytelling is woven into various stunts, mainly aerial silk shows where performers use colored silks, hoops and cages to hang from the ceiling.

“When I started doing it, I had just come off major abdominal surgery and couldn’t climb. I didn’t have a strong upper body or gymnastics background. I took a class and immediately fell in love,” Brewer says. “That’s something that’s amazing about circus. It doesn’t really matter what body you have.”

As gyms reopened in early February of 2021, Brewer was determined to put together a complete production circus arts show for her studio.

The show itself was built around the circus theme with its costumes, set, props and story depicting a combination of historical and fantasy themes. The show included the protagonist, a sleepy maiden played by Phoebe Jerome, a jack-of-all-trades performer for the studio. Jerome performed a variety of dream-like and whimsical numbers throughout the show.

In Jerome’s opening performance, she hoisted herself into the air with straps attached to a pulley. Her lavender dress twirled through the stage fog as she kicked off the ground, and she lifted skyward as her body inverted, legs pointed outward into a split as she swung across the stage.

Jerome says the feeling of performing is an “indescribable excitement,” because circus performance allows for its practitioners to experience being in the air. She has been learning from Brewer for two years and has performed in front of both live and remote audiences.

“You can really feed off the energy of a crowd,” says Jerome about performing for a live audience. “You can feel their excitement.”

She says that as an entertainer, she likes the attention of people watching in person, though working through COVID-19 restrictions has been an opportunity to grow.

Another of the studio’s performers for the show, Melissa Barnes, has a similar experience performing with Revelers. Barnes is a seasoned performer but has found some aspects of performing under COVID-19 restrictions to be challenging.

“We have to be in character even though there's no one here,” Barnes says. “We still have to have that adrenaline, but we have to create it for ourselves.”

For the studio’s latest performance on May 22, 2021, Revelers offered limited outdoor seating that looked into the studio. Tickets sold out within days of going on sale. Brewer decided to release a recorded version of the full show to make the performances more accessible — recording it for what Brewer describes as the “Revelers family” would be the best way to have people see the performance.

Since its early days in 18th century England, people have known circus art as a spectacle of live performances. The fully choreographed shows that characterize modern circus performance have only been around since the early 1980s, revolutionized by Cirque du Soleil. The circus group says it was the first to add the element of story to its performances. As popularity grew for circus acrobatics, smaller groups and studios like Revelers made sure anyone was welcome.

“Circus is so new and strange and weird that any body, small, short, tall, long-legs, short-legs, physique, can do something in circus,” Brewer says. “For me, I want people when they come in to know that it doesn’t matter where you’re starting. I can get you where you’re going.”