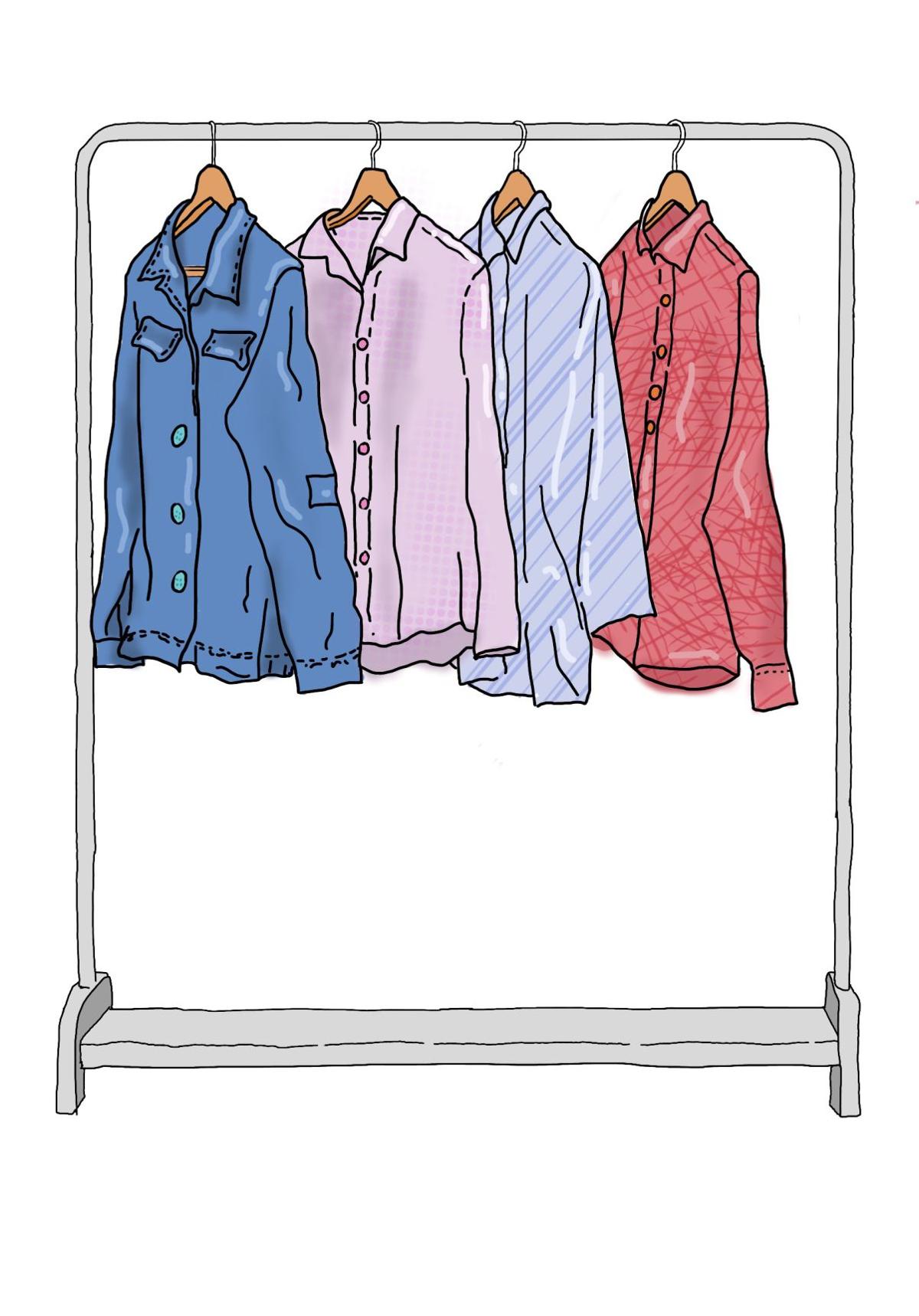 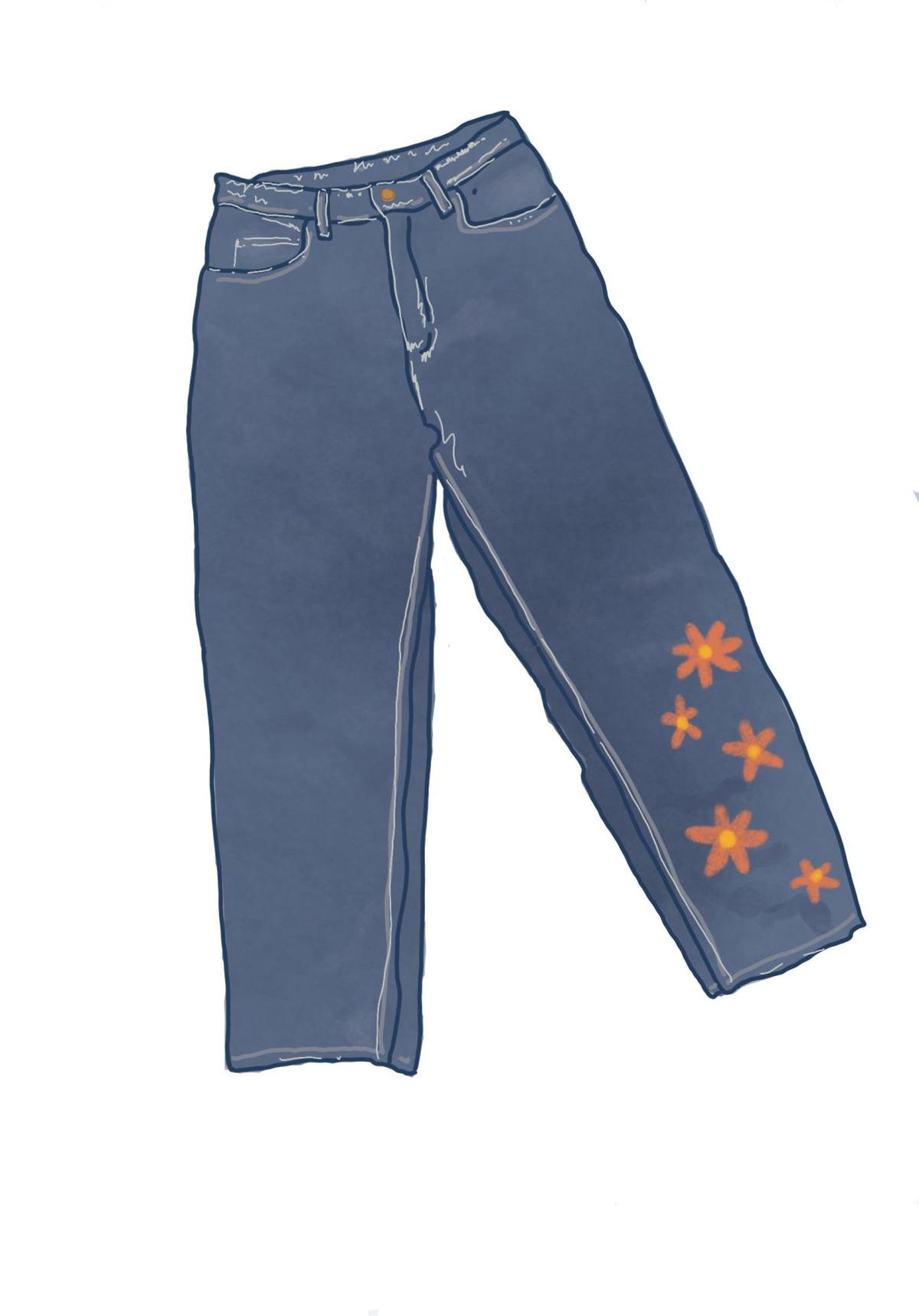 For Oregon State University student and longtime thrifter Natalie Shaw, the mission was simple: find a pair of denim jeans wide enough to wear with the cowboy boots she had borrowed from her mother. The only thing that stood between her and her future pair of jeans was her college student budget and the automatic sliding doors of her local Goodwill in Corvallis.

Sifting through the tightly packed racks of denim pants, Shaw patiently looked over each pair of jeans with care. With each gentle push to the left, Shaw’s eyes wandered from old, worn Levi’s to low-rise, acid-washed jeans accented by heavily bedazzled back pockets as she searched for her perfect pair.

Growing up in Tigard, Oregon, Shaw and her family had always donated clothes to their local Goodwill.

“All the stuff that I got rid of was all the stuff I didn’t want,” she says. “I never really thought about what else there was and that what other people were getting rid of might be something that I really like.”

It wasn’t until high school, when she started getting her own allowance, that Shaw got the idea to start thrifting. Her first shopping trip was to Goodwill, where she found winter sweaters and realized that fashionable and trendy clothes could be found at secondhand shops for an affordable price. Since then, Shaw has been thrifting for all of her clothing necessities.

The rise of resale has become much more prevalent as consumers are beginning to grasp the industry’s potential. Thrifters like Shaw see secondhand stores like Goodwill as the perfect place to find inexpensive alternatives for everyday needs.

Secondhand clothes, or “slow fashion,” are either donated or sold to thrift or consignment stores to be resold to the public for further use. These older and sometimes slightly worn items are often made with higher quality material that’s made to last.

For Shaw, this Goodwill is her best shot for finding the items needed for her college lifestyle, such as clothing and footwear, as well as household essentials like plates and containers. Within these long aisles of shoes and silverware, among metal racks packed with denims and dresses, lies insurmountable treasure.

“Twenty dollars for a pair of jeans doesn’t sound like that much [to me] because, when I think about it, in the past I’ve spent $100 on jeans,” Shaw says. “But every time I take a friend here they’re like, ‘This is used; why am I spending $20 on it?’”

The original tags that still remained on each pair of pants helped show how much she would save. Extra weekly discounts were identified by the color-coded stickers found on each individual tag. Combined with the already low prices, this meant that Shaw was sure to find a bargain.

Living in an ever-changing fashion world, the option to buy second-hand goods has become more popular, according to a 2019 Resale Report by ThredUP, the world's largest online thrift store.

“Resale has grown 21 times faster than the retail apparel market over the past three years,” the report read. In other words, the once booming industry of fast fashion is not as popular with consumers as it used to be.

Fast fashion is a term used by fashion retailers to describe clothing that is made quickly, worn quickly and thrown away even quicker. This type of clothing is strongly dependent on what the latest fashion trend is each week. For big retail companies such as Forever 21, this type of cookie-cutter fashion is their only focus – getting rid of what is considered old and bringing in the new.

This is part of what led retail giant Forever 21 to file for bankruptcy in September of 2019. Reliance on the popularity of fast fashion, as well as a decline of in-person shopping, resulted in the closing of over 300 stores throughout the world, Wendy Liebmann, an expert in retail marketing and CEO of Westfield Service League, a global retail strategy consultant, says.

“Younger shoppers have increasingly turned to consigned goods and brands that claim sustainability as a value," Liebmann writes in a New York Times article. "[Forever 21] placed their bets on this notion that fast fashion was going to continue the same way it had for the last decade or so.”

Just like other forms of discounted consumerism, there has long been a class stigma towards thrifting. The idea of wearing and using another person’s clothes or belongings has been associated with being poor or lower class. However, this stigma appeared to decrease in 2008 during the Great Recession leading to more of an acceptance and desire to buy from resale stores.

Resale businesses are experiencing an increase in popularity, the Executive Assistant and spokesperson at Goodwill Industries of Lane and South Coast Counties, Libby Steffen-Schafermeyer, says. She also says that Goodwill has seen an increase in shoppers over the past few years.

“I think that one of the reasons for that is that the stigma once associated with thrift shopping has faded,” Steffen-Schafermeyer says.

At Goodwill, over 90% of the items sold at every store are donated by the local communities, Steffen-Schafermeyer says. Each of these items help to reduce the carbon footprint and saves hundreds of gallons of water that used to create textiles. A single cotton t-shirt, for example, takes over 700 gallons of water to create. These donated items help to save the environment and pass on a lot of very unique finds for those looking for them, she says.

“Thrift shopping for the treasure hunting is kind of a cool thing to do now, especially with the drive toward sustainability and lack of single use items,” Steffen-Schafermeyer says. “We stock our stores with thousands of ‘fresh’ items every day and it keeps the treasure hunters coming back for more.”

Steffen-Schafermeyer was already an advocate for resale shopping before joining Goodwill seven years ago. She says she started thrifting at the age of 12. For her, second-hand shopping began as a way to find fun items.

“It was one of those things where I hoped to find a diamond in the rough,” Steffen-Schafermeyer says. However, these treasure hunts later turned into an environmentally conscious decision.

After learning more about how much the fashion industry contributed to the pollution of this world, Steffen-Schafermeyer says her love of thrifting turned into a fight towards sustainability in both her own personal shopping as well as her within her job at Goodwill.

“You want to make sure that what you’re getting is quality and you’re not throwing something in the landfill,” Steffen-Schafermeyer says. “The sustainability move[ment] is a really big part of [the increase in thrifting].”

Fashion and the environment

Today, people are becoming more aware of the environmental impact of the fashion industry, and companies are beginning to take steps to meet the consumer demand, according to NARTS, the world’s largest trade association representing the resale industry.

The rise in popularity, according to NARTS, is in part due to “consumers recogniz[ing] the inherent sustainability factor of shopping resale.” This statement also rings true statistically.

According to ThredUP’s 2019 Resale Report, 72% of consumers prefer to buy from environmentally friendly brands. One step was the creation of textiles that used eco-friendly materials.

Eco-friendly brands, such as the UK-based brand Thought, create clothing that is made with natural, organic and recycled fabrics like bamboo or hemp. This way, brands reduce the amount of water wasted to produce the textiles or use natural dyes instead of synthetic.

However, these textiles are often more expensive than most clothing. In turn, thrifting is a much cheaper alternative. According to the Green Story Environmental Study, if a consumer buys one used item, it would reduce its carbon footprint by 82%.

Just as it was for Steffen-Schafermeyer, sustainability isn’t always the first thing that comes to mind when people start thrifting. Chesley Lindsey, a senior at the University of Oregon, started resale shopping because of her college budget.

“It was honestly mostly an economic decision for myself. I care about fashion and I like to stay up to date on trends,” Lindsey says. “So if I could do that on a budget, that’s kind of how I went about it. It was kind of a fun game of like ‘okay, I know that [this person] spent that much on a pair of shoes, but I just found them for so much less.’”

“That’s when I realized how bad [fast fashion] is for the environment and how much it stacks up,” Lindsey says. “That’s when [thrifting] turned more into a sustainability conscious kind of decision.”

Some shoppers may make their way to thrifting later on in life while others can stumble upon it early on in their childhood. That was the case for Katie Quines, a junior at the University of Oregon. For her, thrifting was always present in her life.

“When I was little, [my family] thrifted a lot because my mom liked to get home decor from Goodwill. It was always a good deal for winter coats and things,” Quines says. “But nowadays I just go on my own. It’s where I get a lot of my stuff because it’s well priced and I’m on a college budget.”

Most of the items throughout these stores could be categorized as ‘vintage’ – their original purchase dates dating back at least 20 years or more. These vintage items are a unique find and fun to hunt for, and it’s finds like these that keep pulling secondhand consumers back for more.

“It’s just kind of like flying by the seat of your pants, which I think is fun,” Shaw says. Some of Shaw’s unique finds include a bamboo steamer, a wine decanter and a Le Creuset tea kettle. For Quines’ thrifting adventures, her favorite things to find are used books and quirky mugs to add to her collection.

After 15 minutes of searching, Shaw found a pair of jeans that might fit the bill.  She left the bright, hanging lights that loomed over the aisles for a changing room. The faint background music echoed through the store as she tried on her secondhand discovery. The result: a $15 pair of durable boot-cut jeans. With her prize in her grasp, Shaw headed for the check-out; her hunt for the day was complete, but there is no end in sight for her thrifting days.

“I’ve just had such good luck, and it’s so fun,” Shaw says. In the end, she was able to achieve multiple goals; she found a pair of boot-sized jeans, kept her budget and reduced her carbon footprint. All in all, another successful secondhand hunt.