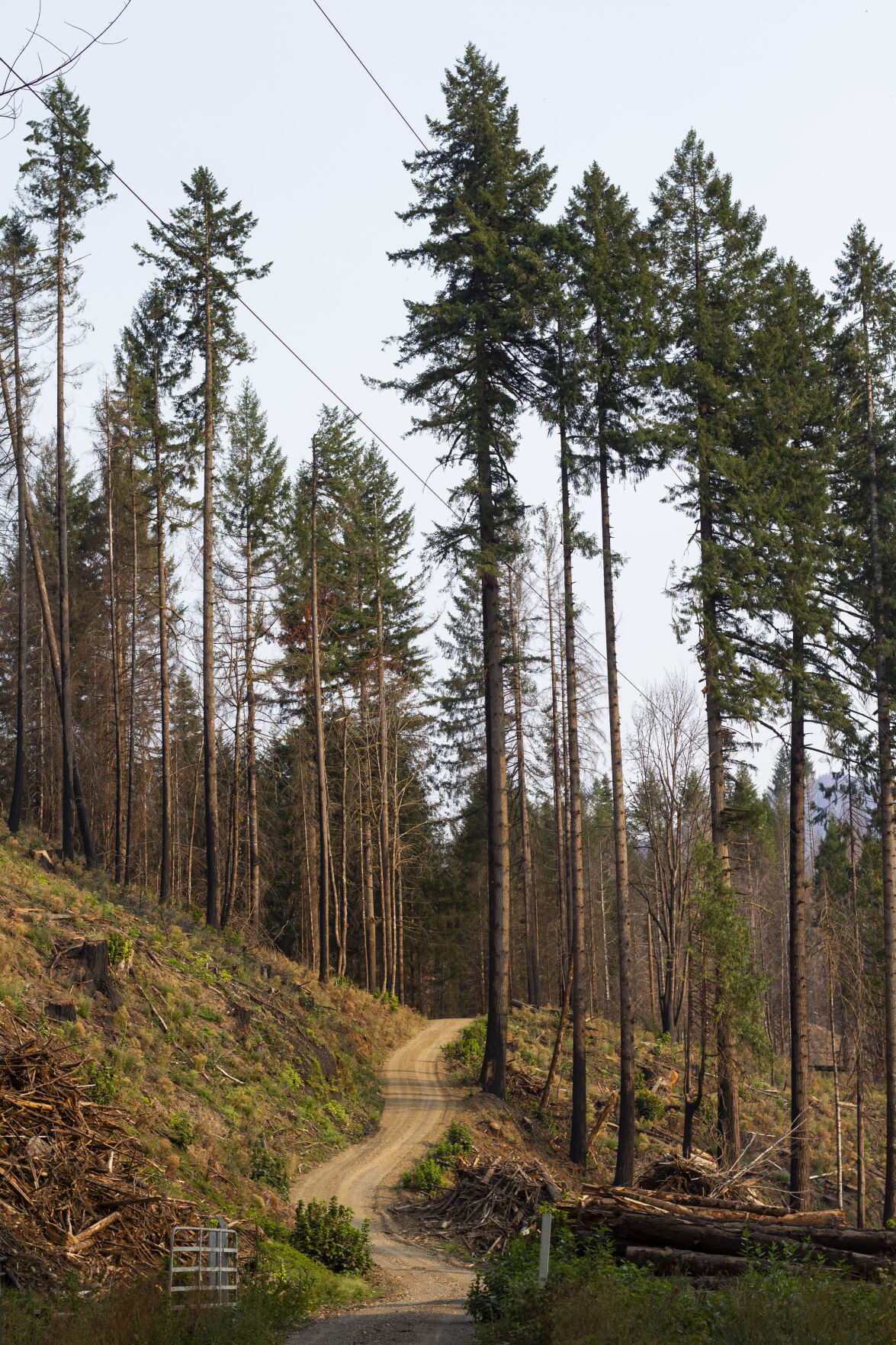 Forest debris and logged trees sit at the base of a scorched forest next to the Mckenzie River near the Leaburg Dam. Nearly a year after the Holiday Farm Fire tore through the Blue River community, evidence of its destruction can still be found in the blackened trees and barren home foundations left behind by those displaced by the fire. 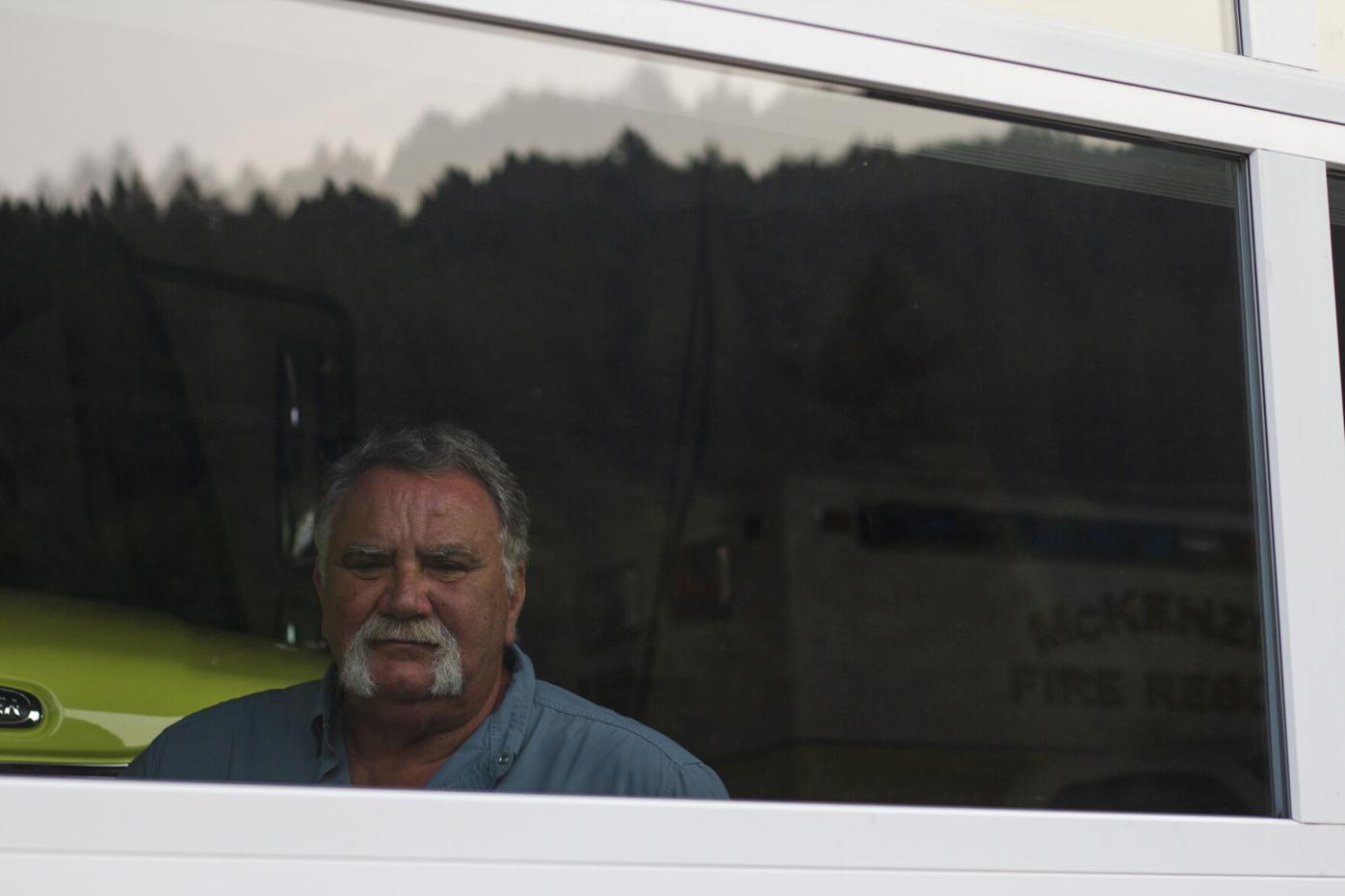 Fire battalion Chief Dana Burwell stands in the Mckenzie Fire and Rescue fire station. When the Holiday farm fire began, Burwell worked for two days to help save buildings and evacuate people from the blaze. Burwell, having grown up near the Blue River community, says watching his friend’s houses burn down was emotionally draining. “I just didn’t have anything left,” Burwell says. 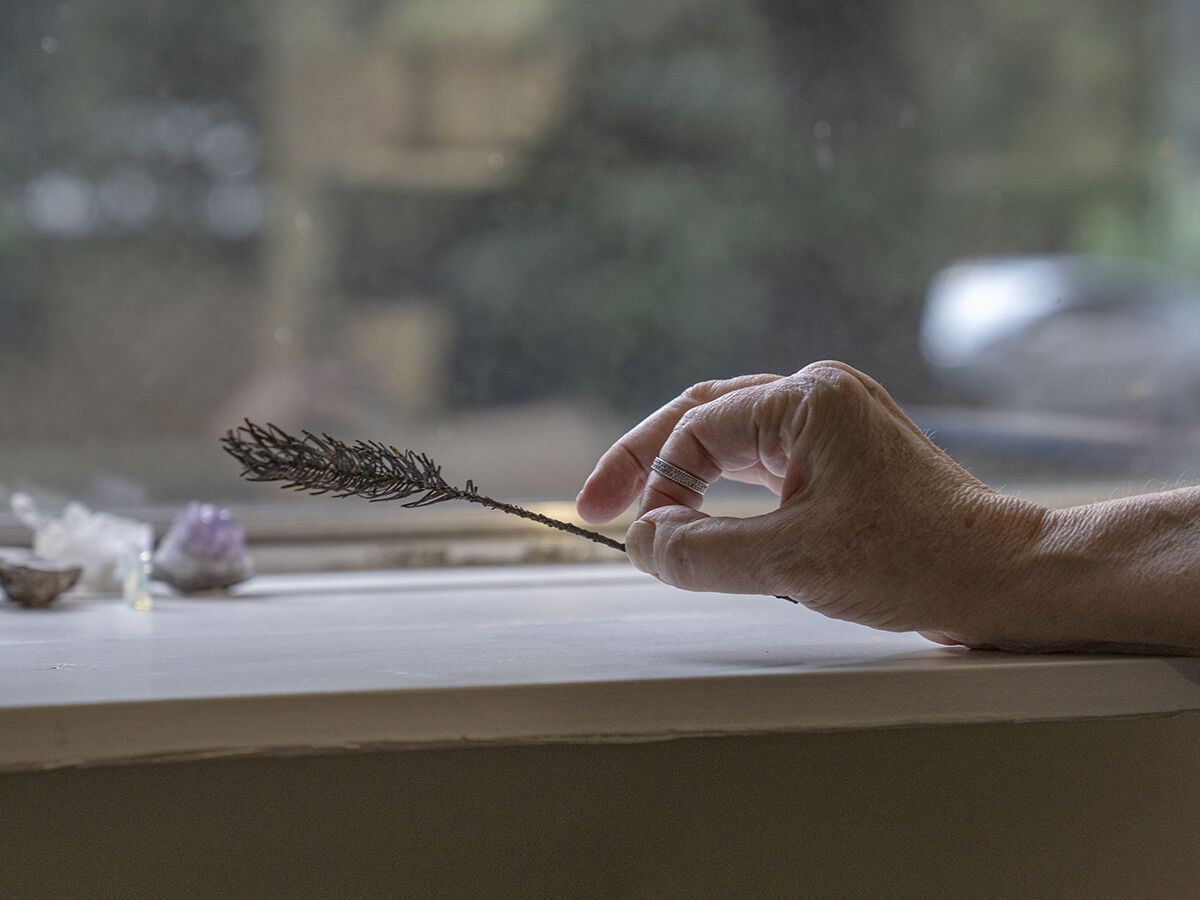 In her home office, a couple of minutes walk from the perimeter of the brush fire, Brooks picks up a small piece of fir tree. She found the twig leaning against her home when she returned after evacuating the Holiday Farm fire in September 2020. “It’s symbolic to me,” Brooks says. “Something that small could light up the house.” (Photo and caption courtesy of Eden McCall). 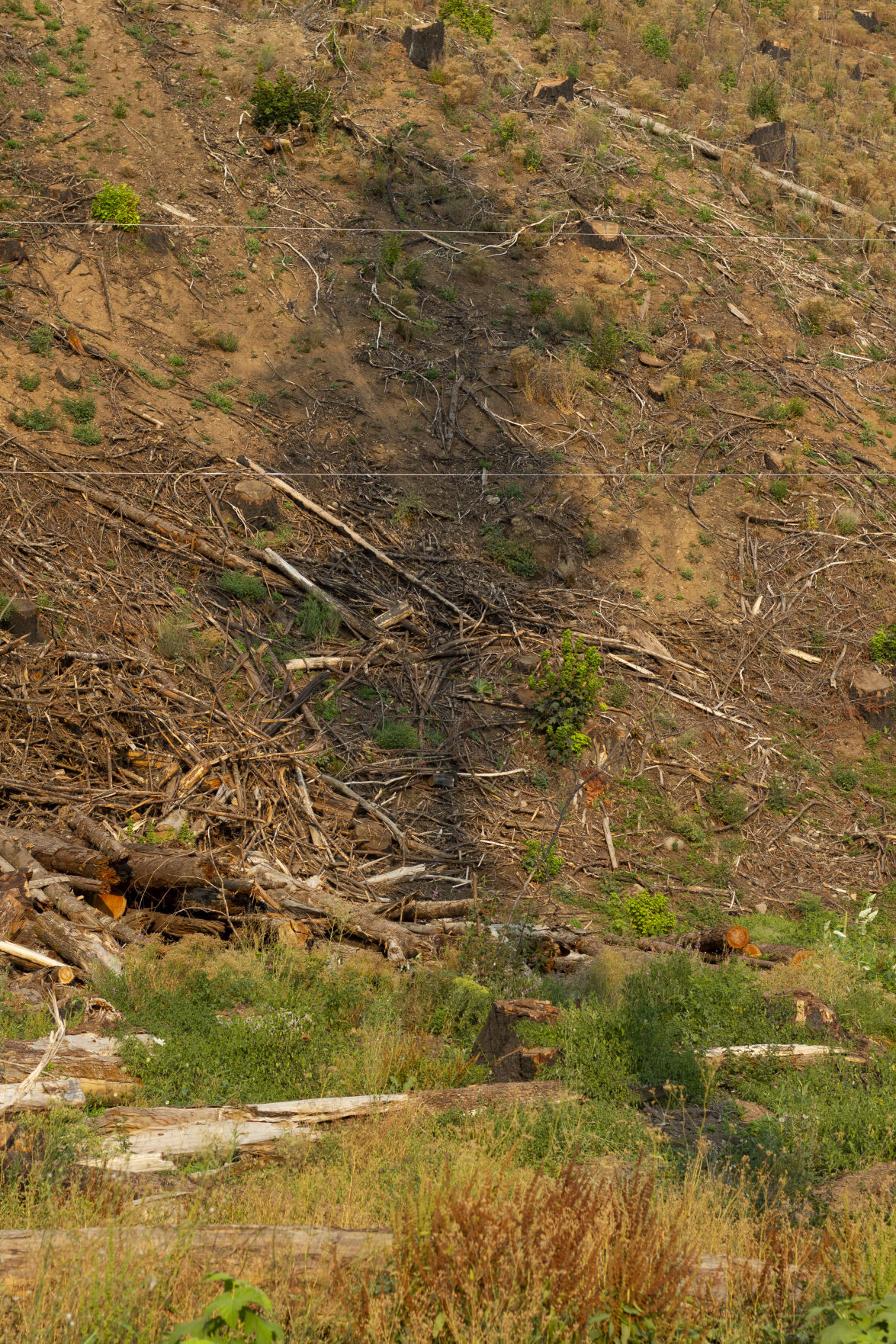 Near the Leaburg Dam, the shadow of a tree casts on a hillside where a forest burned by the Holiday Farm fire was cut down. This hillside showcases only a part of the destruction of the Holiday Farm fire, which burned over 400 homes and now stands as one of the largest wildfires in Oregon’s recorded history. 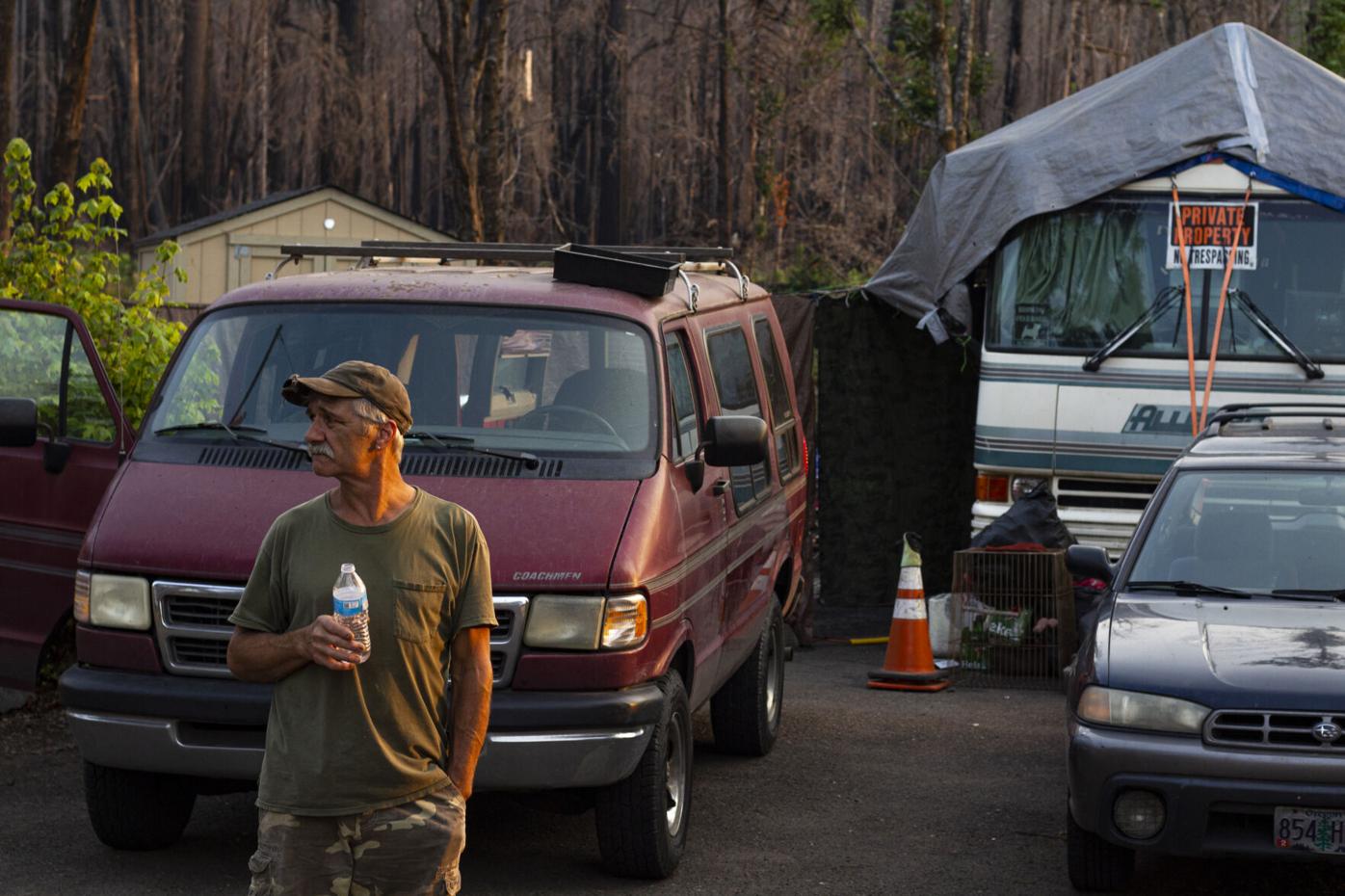 Andy Carrino, a Blue River resident, stands in front of his red van. Carrino lived in his van for 43 days after the Holiday Farm fire destroyed his home. On September 8, 2020, the first night of the fire, Carrino and his wife left their home in a frenzy around midnight, after the fire spread to the hillside behind their house. Carrino says, “the next morning, we woke up in our van with my parrot, my dog, my wife in front of my son’s house, and I leaned over and wished her a happy 25th anniversary.”

A conversation with Valerie J. Brooks, a survivor of the Holiday Farm Fire

Valerie J. Brooks was working on her third novel on June 28 when the lights flickered. All summer, she watched with unease as the vegetation on her property turned yellow and brittle in the summer heat. On a windy day like this one, she was on edge. The lights shut off, and she pulled herself away from the computer. She rushed to the nearest window and looked outside to see a plume of white smoke rolling over her yard. It triggered a panic attack.

Immediately, she felt her heart rate quicken. Her mouth went dry, and she began to sweat.

"I felt the same way that I did when I picked up the phone, and our family doctor told me my dad had shot himself," Brooks says. "You want to scream, and you can't."

A small fire had started in the corner of her property. Brooks is used to being the person who holds everything together in emergency situations, but she couldn't clear her head this time. Brooks is one of many people who developed PTSD symptoms from the Holiday Farm Fire.

On Sept. 7, 2020, the Holiday Farm Fire started and burned over 173,000 acres and several towns along the McKenzie River, according to InciWeb. Many lost their homes and barely escaped with their lives. Today, whenever the wind picks up, when Brooks smells smoke or when an emergency vehicle wails past her house, it can bring her back to one of the worst days of her life.

Her fear of wildfire is not unfounded. According to the National Interagency Fire Center, wildfires in the United States have increased in size and severity each year. The Oregon Office of Emergency Management reported that the Labor Day fires last year burned over 1 million acres — double the 10-year average — forcing more than 40,000 people to evacuate their homes. According to the 2021 Oregon Wildfire Response Overview, as of Sept. 26, wildfires in Oregon have already burned more than 289,000 acres this year.

The physical impact of wildfire is only part of the devastation. In a 2016 case study, wildfire evacuees were found to have high levels of insomnia and severe symptoms of depression, and roughly 60% of those affected met the criteria for PTSD. Another study found that symptoms of PTSD were prevalent in 30% to 40% of direct victims of disasters.

Over the last year, people traumatized by the Holiday Farm Fire in Vida, Leaburg and Blue River, Oregon, have been coping with the permanent psychological impact of the fire. Some experience panic attacks, night terrors and depression, while others find themselves crying when it doesn't make sense.

For Brooks, recovery has been slow and complicated. At first, she threw herself into finding housing for other evacuees, rarely leaving her computer. According to Dr. Mary Schoenfeldt, a traumatologist who worked with communities affected by the Holiday Farm Fire, staying busy by helping people is a common coping mechanism for people in the immediate aftermath of a disaster.

"If I give my time and energy, then I'm not forced to be immersed in the grief and loss yet," Schoenfeldt says. "When it's the right time, you can shift to a quieter place. You slow down, and it catches up."

The devastation of the Holiday Farm Fire began to weigh on Brooks within a few months. She didn't want to talk to anyone, she couldn't keep track of time, and she had trouble sleeping. Writing was always an escape for her, but she couldn't focus on her notes.

After working with the McKenzie River communities immediately after the Holiday Farm Fire, Schoenfeldt has been following up with the community, analyzing how individual recovery affects a community's ability to heal. Schoenfeldt frequently sees posts in Facebook groups indicating the communities still recovering are "hypersensitive" during the 2021 fire season. Brooks says the same thing.

"People up here are just on edge. We try not to be, but we're going to be going through this all summer," Brooks said. "We are still dealing with a drought. There's still a lot of green that can go."

When the fire started on Brooks' property that day in June, she and her husband immediately heard shouting and screeching tires. She says that six to 10 community members barreled into her yard with their tools to help contain the fire before it spread to her home.

According to Dana Burwell, the battalion chief and former fire chief for McKenzie Fire and Rescue, the fire started when the limb of a maple tree blew into the power lines on Brooks' property. The wind was blowing, and the fire quickly spread in the dry grass. While her neighbors beat the fire back, Brooks called 911. Within minutes, McKenzie Fire and Rescue was dispatched.

"It was probably six minutes before McKenzie Fire had a truck on scene," Burwell says. "The remarkable thing was that, during those six minutes, the neighbors came out in force."

Without the community's effort, Burwell says, the fire could've been up to four times larger and easily could have spread to Brooks' home.

"When I drive up river now and look at all those homes, I just flashback to that next morning when I was driving down river and everything was on fire," Burwell says. "All my friends' homes were on fire, and there was nothing I could do about it."

While the firefighters finished putting the fire out, Brooks stood back and watched — they contained the fire to a corner of Brooks' property across from her house.

"My neighbor Debbie, from across the street, came up behind me and gave me a hug, and we just stood there holding each other," Brooks says. "Those people who put out the fire probably saved another major fire up here. And those are our neighbors. That's the way this place is."

Brooks says she is recovering over time. When she has an anxiety attack, she tries to control her breathing and slow her heart rate down, which brings her mind to a more rational place. She says that it helps to do normal, everyday things and that her husband, Daniel Connors, supports her with his sense of humor. Connors says he never questions his wife's judgment.

"We'll go and do whatever she feels necessary to do," Connors says. "I can make it happen."

Schoenfeldt says that tight-knit, rural communities tend to have a high level of community resilience because they're more willing to depend on their neighbors. She's interested in the ways that the McKenzie River Communities support each other on social media. Locals created several Facebook groups to help people talk about mental health and keep each other posted on fire activity. Often, they'll tell each other why emergency vehicles are in the area to help mitigate potential triggers.

"What I see in disasters everywhere is the communities that have the strength ahead of time. They're already connected like this," Schoenfeldt says. "You can knock them down. But, you know what, you're not going to tear them apart."