About EMG
Advertise With Us!
Sign up for the DailyE
Support Student Media
Privacy
About
Multimedia
Staff
Archives 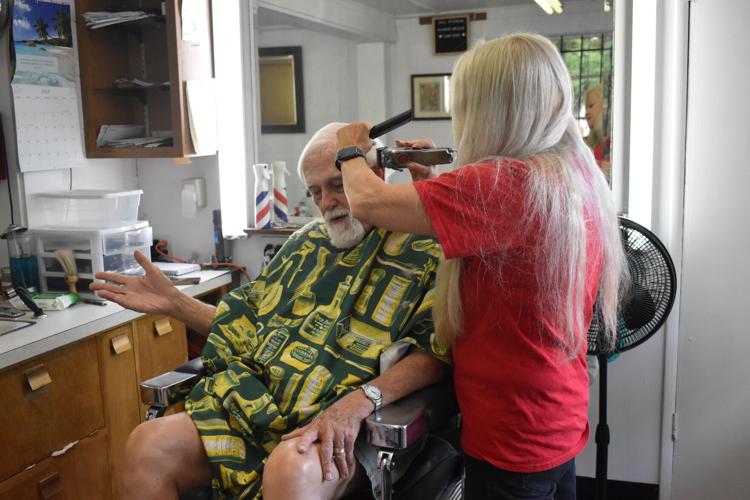 Jolan Hill chats with a customer as she cuts his hair. She began working with Shields at the beginning of the pandemic, after Shields lost a lot of her previous workers. 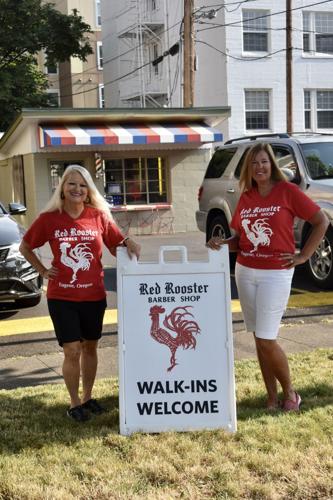 Shields (right) and her new business partner Jolan Hill (left) stand outside of Red Rooster’s new location. They pose in the bright red shirts that Shields once gave away to freshmen who came in for their first cut. 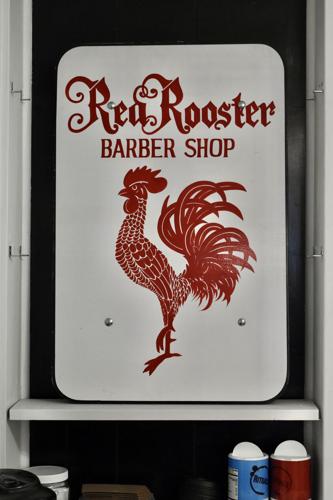 A sign that hung inside of the original Red Rooster Barber Shop now sits on a shelf at the new location. 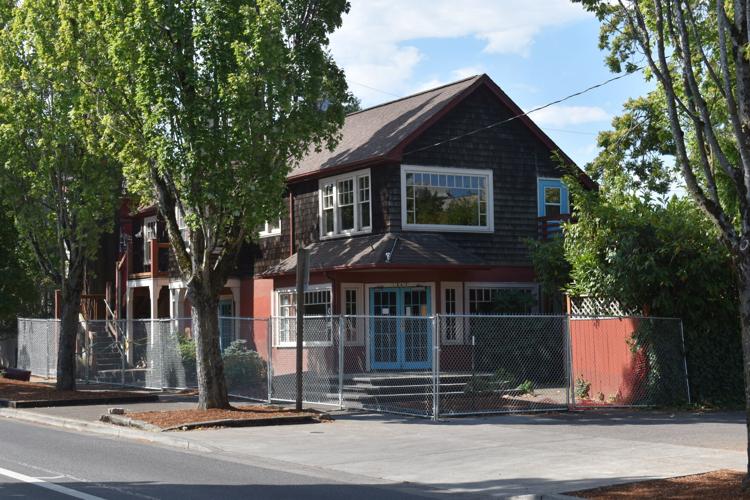 The now-closed Glenwood Restaurant is fenced off, awaiting demolition so that new housing can be built in its place.

Karyn Shields has seen it all when it comes to men’s haircuts. After spending more than five decades in and out of barber shops, she has seen the rise, fall and resurgence of men’s hair trends, from shag cuts to mullets to Justin Bieber moptops to fades and back to mullets among the college crowd. She has also seen businesses change.

Shields is used to a continuous flow of customers at Red Rooster Barber Shop. Two years ago, when her shop was tucked on the corner of Kincaid Street and 13th Avenue, college students were the heart of her business. Sometimes, five freshmen would walk in right at her 5 p.m. closing time and she wouldn’t leave until 6 p.m. Shields says. But she didn’t mind. Shields loved working with a young demographic and the excitement of being on 13th Avenue, the block directly next to the University of Oregon campus.

Now, Red Rooster sits listless. Shields sees few young faces these days. When a client finally walks in, it is an older gentleman rather than a college student that Shields greets. “Should I cut your eyebrows too?” Shields asks him.

When he leaves, Shields jokes that’s why she misses the college kids. “That’s the difference between the young kids and the old guys — With the old guys, I have to do ear hairs and eyebrows. And I don’t get to do fun haircuts.”

However, after more than four decades, Red Rooster Barber Shop was forced to move from its spot across from the UO Duck Store to a spot 16 blocks west of the original location, near 13th Avenue and Willamette Street. Unfortunately for business, the college clientele has not moved with.

This story of translocation is just one of many on 13th Avenue. In recent months, longstanding businesses including Glenwood Restaurant, Caspian Mediterranean Cafe, Candy Mountain Cafe and Rainbow Optics  have left 13th Avenue. Now, the street is lined with vacancies, predominantly where local mom-and-pop stores used to be.

Espresso Roma employee Ricardo Gomez has worked on 13th Avenue for 15 years and says he has witnessed a drastic change in the composition of businesses on the street.

“I think we finally hit the peak, a major change where it's like, you don't have your family-oriented businesses as frequently, which I think is what made this street, specifically, the campus street,” Gomez says.

Long-standing family businesses have been pushed out, in part, to accommodate a series of student housing developments planned for East 13th.

A 12-story apartment complex will take the place of the 7-Eleven lot and Glenwood Restaurant property, which was purchased by Alum Eugene LLC for $3 million in late June 2021. In a separate project down the block, the UO Duck Store plans to renovate its space to accommodate retail on the ground floor and four levels of student housing on top, according to a press release from February 2022.

Webfoot Bar and Grill is the physical cutoff for the properties owned by the Duck Store. Employees there have seen many local businesses leave, like Caspian Mediterranean Cafe next door. Austin Lee, a bar back who has worked door security at Webfoot since 2016, says it’s been “a weird change.” He feels the absence of Webfoot’s neighbor, Caspian Cafe, which he says still receives a lot of foot traffic from students who have not yet realized it is gone. He laments the loss of Glenwood Restaurant down the block, another popular spot for the college crowd.

“Who didn’t go to the Glenwood after partying on a Friday or Saturday night and sit there in the morning, nursing a hangover?” Lee says. “Going there was a rite of passage if you were a student.”

The Glenwood property was purchased by a development company managed by Eran Fields, who went on to purchase the complex where Red Rooster Barber Shop used to have a lease. This building complex on 13th and Kincaid was previously owned by the family that operated Taylor’s Bar and Grill.

According to project proposals from Works Progress Architecture LLP, the plan is to construct a space for a restaurant and retail on the three bottom levels and then upscale condos on floors four through 13.

Many businesses on 13th Avenue have disappeared since Shields’ father first opened Red Rooster Barber Shop in 1968. The barber shop was one of the first of its kind in Eugene, Shields says. Shortly after, her father opened Man’s World, the barber shop in which Shields would grow up and eventually begin her own barber career at the age of 21. Shield’s father sold Red Rooster in 1972, but when the opportunity presented itself, he decided to buy it back for his daughter in 2014.

Shields was excited to work on East 13th Avenue, a place she had loved growing up.

“It was a wonderful environment,” Shields says. “In high school, we skipped school to drive that street. It was just a cool place to be — ‘Oh, let's see if we see any track stars today.’ And I didn't look back once I got down there. Kept you young.”

When she inherited the business, Red Rooster focused on an older client base on an appointment-only basis. Shields and her father remodeled and changed the barber shop to exclusively walk-ins and catered to a younger market. That’s when Red Rooster adopted a new marketing strategy: T-shirts for all college freshmen, or rather, any new student that hadn’t been in before.

The T-shirts were a hit, according to Shields. “If I got them as freshmen, they always came back. The fraternity boys, they got all their buddies. It snowballed from there.”

Business thrived under Shields’ new ownership, and Shields enjoyed her newfound relationships with college students. One student invited Shields to his high school graduation. A couple others convinced Shields to hire them to paint her house to fundraise for a trip. Because of school schedules, the project took them a couple weeks to finish. Shields’ house sat half-painted during finals week, but she didn’t mind.

Shields says things started to change when Taylor’s Bar and Grill lost its liquor license in February 2020. The Taylor family owned the entire complex where Red Rooster had a lease, but the bar was their big moneymaker. When the COVID-19 pandemic hit, Shields says her landlord switched to month-to-month leases for her and other tenants.

This decision was reassuring for Shields, as she worried about paying rent for a year when she had no source of income. Following an executive order from the Oregon governor, businesses were forced to shut down for two months, from late March until May 2020.

“I was scared because I had to pay rent down there,” Shields says. “No matter what, I paid. I paid for everything. I paid my rent from my personal savings account.”

When Red Rooster was allowed to reopen, Shields says business was still down 75% of its usual traffic. But haircuts slow down in the summer anyway, so Shields says she hoped to get by and recoup her losses in the fall. However, seven days into fall term 2021, the state issued another executive order to shut down.

Shields held on, knowing the flurry of at-home haircuts gone wrong would drive people back to barber shops as soon as restrictions were lifted.

But on Sept. 15, 2022, Shields received notice that she would have to vacate the space in 30 days. She was told to leave her keys at a disclosed location, and unless she received written notice by the new owners to stay, she must be fully cleared out. Shields tried to contact the new owners but was unable to get in touch with them.

The N.E.S.T., a vintage clothing store opened by two UO students in 2020, also rented the complex along with Red Rooster Barber Shop. Unlike Red Rooster, the N.E.S.T was able to receive an extension from the new owners to occupy the space that was previously part of Taylor’s Bar and Grill. The store will be allowed to stay until the building gets torn down, but it remains unclear when this will be, says N.E.S.T co-founder and owner Harrison Stevens.

Once construction is complete, the N.E.S.T. hopes to move back in.

“I think it's in the best interest of the community to still maintain some of these businesses on the ground floor, especially if people are familiar with them,” Stevens says. “They're going to bring natural foot traffic.”

“We really want there to continue to have the vibrant business mix on the block,” he says.

Breiteinstien acknowledges there will be growing pains. In order to make room for new construction, local businesses have had to move out. Like Red Rooster, other businesses on 13th Avenue fear that if they have to move out to accommodate construction, they may not be able to come back.

Shields would love to be back in the same spot, tucked on the corner of East 13th.

However, she is concerned the new ownership means rent will no longer be affordable for small businesses like hers. Shields says when her dad first moved Red Rooster onto 13th in the 60s, the street was lined with individually owned mom-and-pop stores. Now, she says, chains and apartments are increasingly dominating the street because they’re the only ones who can afford it.

Gomez worries for the future of Espresso Roma. He believes new development on 13th comes with a cost.

“The trade-off is that you lose diversity in the little campus ecosystem,” Gomez says. “This is a cafe owned by a bunch of Latinos.”

If Espresso Roma were to be replaced by a chain restaurant, Gomez says, it would mean sacrificing an experience rich in culture and character. The staff at Espresso Roma have spent years forging connections with the Eugene community. Because of these relationships, Gomez says he’s been able to teach people words in Spanish and let customers off the hook when they forget their wallets, because they’re regulars that he knows will come back. These interactions are personal and personable, not strict business exchanges.

A couple doors down, at Webfoot Bar and Grill, Lee mourns the loss of individuality as a part of a larger transformation Eugene is undertaking.

“I miss the old days where there were mom-and-pop shops and there was a fun community vibe,” Lee says. “And that was what Eugene always stood for — this kind of weird quirky town where kids came from bigger cities and they got to see this meld of country and urban living. Now it’s turning into glass and steel.”

Inside the Bus System

Keepers of the Sanctuary State

New development has displaced Red Rooster Barber Shop and other small businesses on 13th Avenue, leaving the future landscape of the street uncertain.