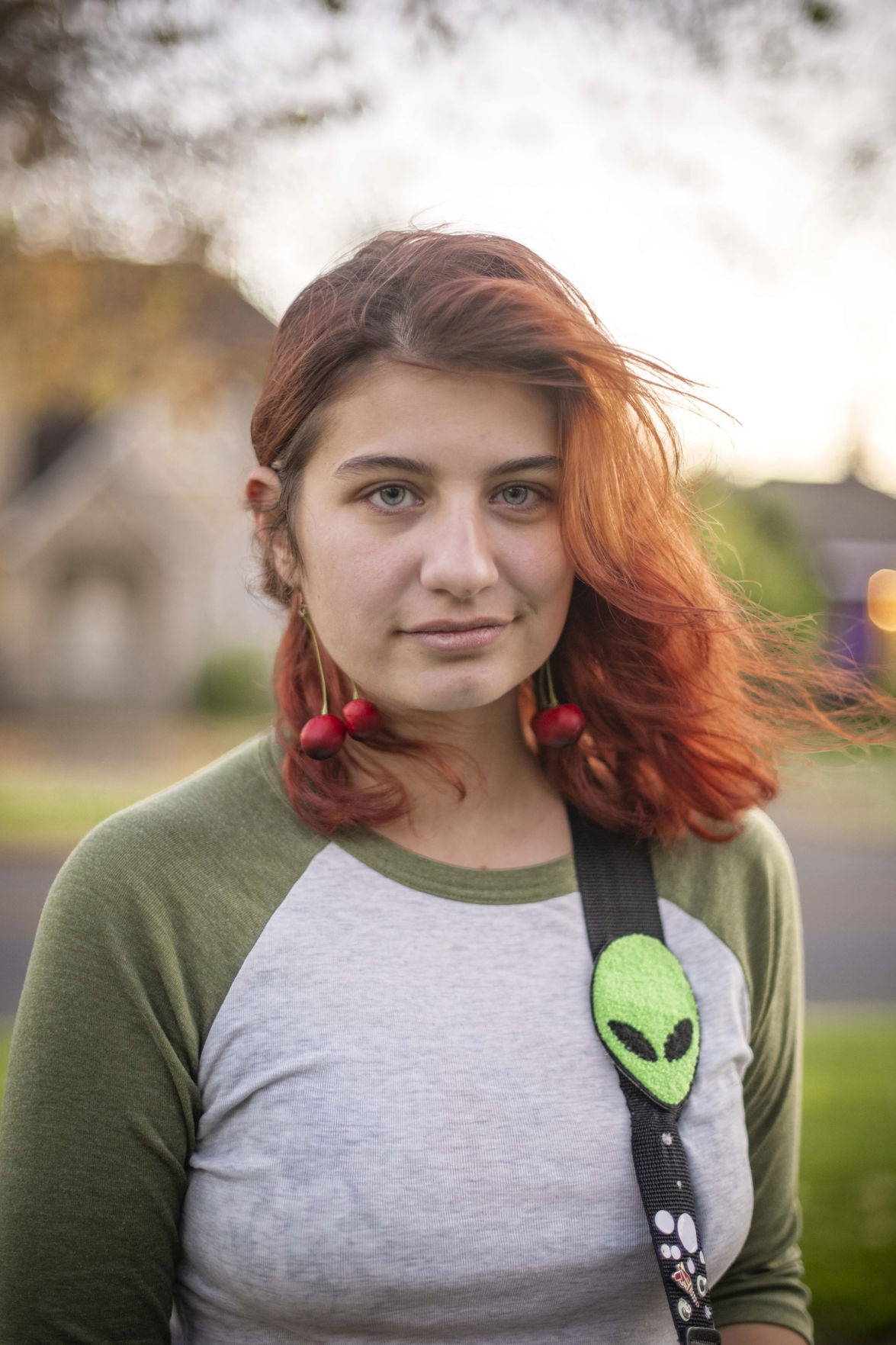 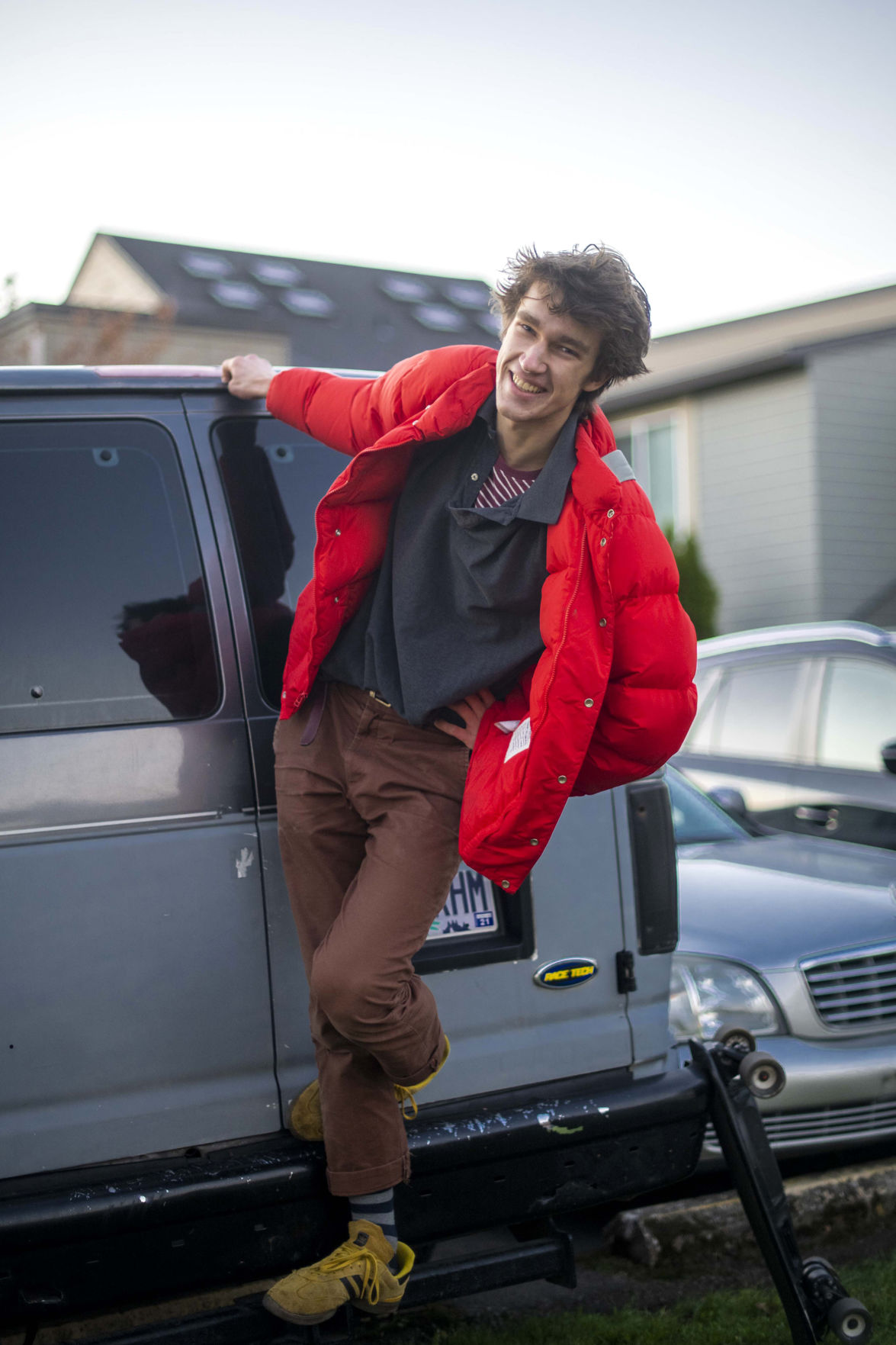 Cal Fenner, the bassist of Laundry, hangs off the back of a parked van while posing for a portrait. Fenner is a journalism student at the University of Oregon. Photo by Meg Matsuzaki 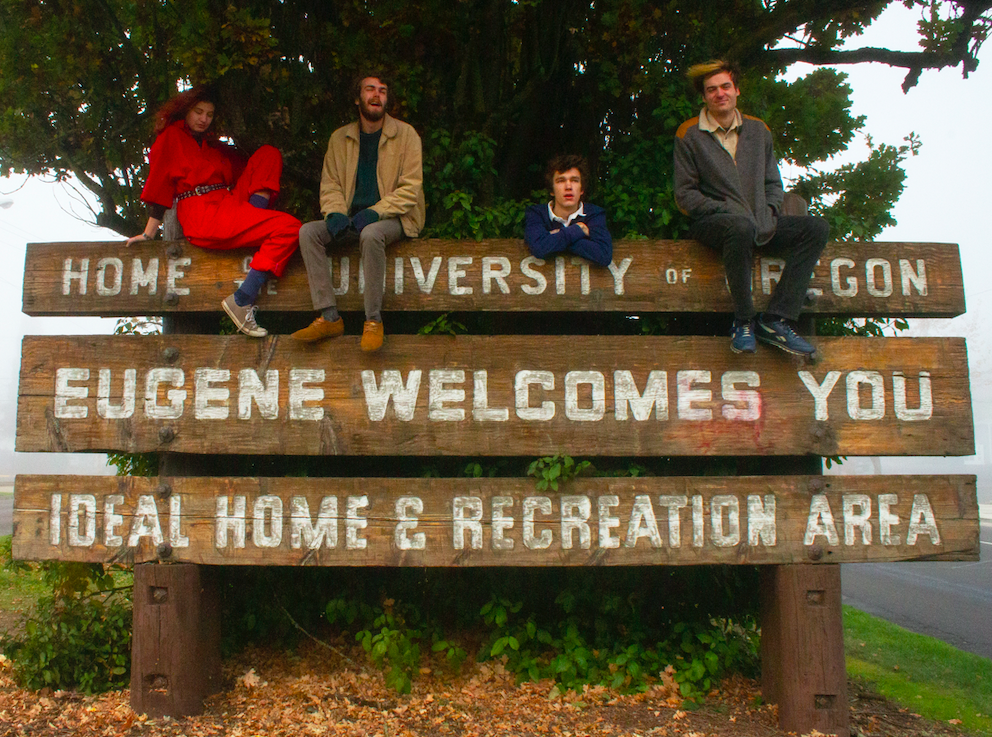 Laundry members Kiki Parrosien, Cal Fenner, Riley Somers and Nik Barber sit and hang on the City of Eugene welcome sign for a portrait. Somer says Laundry isn’t paid much for their performances but money isn’t their motivation for playing. He says they play to make art for themselves and for their crowd. Photo by Josh Murray

From left to right, Laundry members Cal Fenner and Riley Somers play one of their songs live underneath the Interstate Highway 105 bridge in Eugene. The name Laundry stems from the band's first performances held in a college dorm laundry room. Photo by Josh Murray

On a Thursday night in the middle of October, a crowd of people are gathered in a skatepark under the arch of a busy highway in Eugene, Oregon. The graffiti of local artists sprawls across the skatepark. Out from below the shelter, the rain drenches all who dare brave the habitual autumn showers. But as the city streets flood, more people flock toward the park’s makeshift stage. Minutes before the show starts, the crowd continues to grow by the dozen.

Out here, something special is happening. Local music has found its way into the heart of Eugene’s college culture, and the music scene has become a fundamental part of the college experience. In Eugene, students can enjoy a Saturday night watching their classmates perform and grow as musicians.

One student band has grown particularly popular within the last few years: Laundry. The band’s charm comes from their talent, their affable stage presence and their passion for art.

Each member comes from a different musical background, which gives the band a complex musical dynamic. Guitarist Kiki Parrosien credits Prince as a huge inspiration for her music, while guitarist Riley Somers credits Jimi Hendrix and King Gizzard and the Lizard Wizard. Drummer Nik Barber speaks of jazz musicians like the Yellowjackets and bassist Cal Fenner credits singing groups like early Beatles and the Beach Boys.

Laundry started in the musician dorms of the University of Oregon. They would spend the night playing in the dorm’s laundry room. Originally they called themselves Laundry Room Lounge, but soon shortened it to Laundry.

Ever since they started, they had different academic focuses. But they always managed to perform at least once nearly every week. The balance between studies and music is delicate. They need to strategize when is the best time to study and to perform, but ultimately the band is their priority.

Still, the band says that attending college did more than just burden them with homework and exams. The local music scene and the university presented new opportunities for performing and making music. This connection between academic and musical life started early for Laundry.

The four met at school.

“I think meeting the bandmates alone was enough of a reason for me to get here,” guitarist Somers says. Before Laundry, some of the members had been in high school bands or had musical aspirations since middle school. But Eugene brought about new connections and means that helped them achieve the platform they have today.

One of the connections was Spiller, a band that formed in the dorms a few years before Laundry. Laundry band members say Spiller helped them find shows and places to perform when they started – and continue to perform and work with today. Dorm room bands and the pre-existing music scene supports and acts as a platform for Laundry's art, bassist Fenner says. Barber, Laundry's drummer, also says UO's music students and faculty have been key collaborators to Laundry's music.

But the support went beyond campus, Fenner says. The music scene in Eugene has been a supportive environment for their art. Community members consistently come to the shows and help the band through donations and by purchasing merchandise and CDs. Fenner says this community has helped Laundry grow and develop through their performances.

"There was already a scene here before we started doing this. It’s a good place to grow and play a lot of shows and get better as a band," he says.

Like a lot of other local bands, Fenner says that collaborations between artists is how they first started playing. Other artists would let them play at their shows and it’s how they continue to play. They support and encourage other bands to return the favor and continue the cycle of bands helping bands, Parrosien, Laundry’s singer, says.

But Barber says that back in the dorms, he had showed the members a buddhist chant that is supposed to improve sonic creativity.

“I don’t know if it really works but at the very least it’s a nice placebo effect,” Somers says.

Barber says that they sometimes sit in the van and sing their songs together and harmonize, similar to an acapella exercise.

Ultimately, Fenner says the band prepares to perform cohesively, not just with each other, but with the crowd as well. “Our audience is us,” he says.

This audience has been growing and changing overtime, Fenner says, probably due to Laundry's growing popularity in the Eugene and UO music scene.

Laundry has seen their audience grow over the past few years as their performances become increasingly popular. Fenner says the band has noticed this with great surprise. But as exciting for the band as it is, Somers says, “I like to think as much as we do enjoy seeing the audience grow, if one day less people started listening to our music that we would still keep making it.”

Streaming technology has also widened the public distribution of their work and allows their audience to listen to their music – and learn it before concerts.

Somers says that’s not what they perform for anyways. Instead, Somers says they perform because they want to make art for themselves and for their crowd. He praises the support of the crowd saying, “We’re getting rained out right now but that’s all secondary to the good attitude that everyone has.”

“It’s a real privilege to have an audience. A lot of people make art and never find an audience and I am always grateful to have that,” Fenner says.

Barber says that the feeling of performing to this growing audience is similar to that of being on a rollercoaster. Fenner says it's drug-like; as his tolerance and skills increase, his desire to do better and bigger shows grows.

“I have a high tolerance, I need my fix,” Fenner says.

Their relationship with performing has also been changing with their music and audience. In high school, Parrosien says she felt anxious playing the guitar. She would feel nervous on stage with the pressure of being a woman guitarist – a role often attributed to men.

“My goal was to become the main shredder, to become really good at guitar because people don’t often expect that of women,” Parrosien says. “I felt a lot of pressure because I had just had these expectations for myself and wasn’t meeting them necessarily.”

So she was reluctant to become a vocalist because she feared she wouldn't be "breaking the mold" as she had previously wanted to do.

“But I’m over that, I think that’s silly, I should be able to do whatever I want,” Parrosien says. Since singing and playing in Laundry, she says her confidence on stage has completely transformed how she feels about performing.

Fenner says their self-doubts are part of the creative process and how they develop their art. Somers also says that they perform a lot of their music before recording it.

“My favorite part is that window of having finished something and starting something new because I always learn from the last thing I recorded,” Somers says.

Despite the unchanged creative process, Fenner says Laundry’s sound has evolved a lot since the band first formed. He describes their original sound to be more funk punk style but that they now have taken a more dream pop route. Still, Somers says their music isn’t so easily defined. “If you know what our music is, tell us,” he says.

In terms of pursuing music as a career beyond college, Parrosien says, “I think all of us would love to see this be a viable economic source of income but we still should feel lucky for what we got.”

She also says they are also grateful to be able to continue making music at this point in their lives.

The band’s music is both personal and collaborative. It is born from the members’ passions and is molded by their collective growth.

Local performances are not the only opportunities to discover the band’s music. Laundry recently headed north and went on tour in the summer of 2019. They drove up in a van and performed in Seattle and Olympia in Washington and in Vancouver and Colona in Canada. Even though they loved touring in new places, Somers says not all aspects of tour life are so joyful and glamorous.

“We say we go to all these places but at every place we go it’s Shell, Safeway and we torture ourselves with McDonalds,” Somers, the guitarist, says.

They plan on touring again over winter break, heading south this time through California, stopping in Berkley, Los Angeles, San Diego and ending in Las Vegas. Although they are enthusiastic about their upcoming tour, Somers says, “There’s nothing like a nice Eugene house show at the end of it, to remind us of home.”

From their origins to their shows, Laundry remains a talented band with passionate artists who want to keep playing and creating. Somers says their favorite place to play is “wherever the people are.'' Be that a skatepark on a Thursday night during a torrential downpour, or a house where the floor nearly breaks from the crowd’s dancing, Laundry will play for the people.