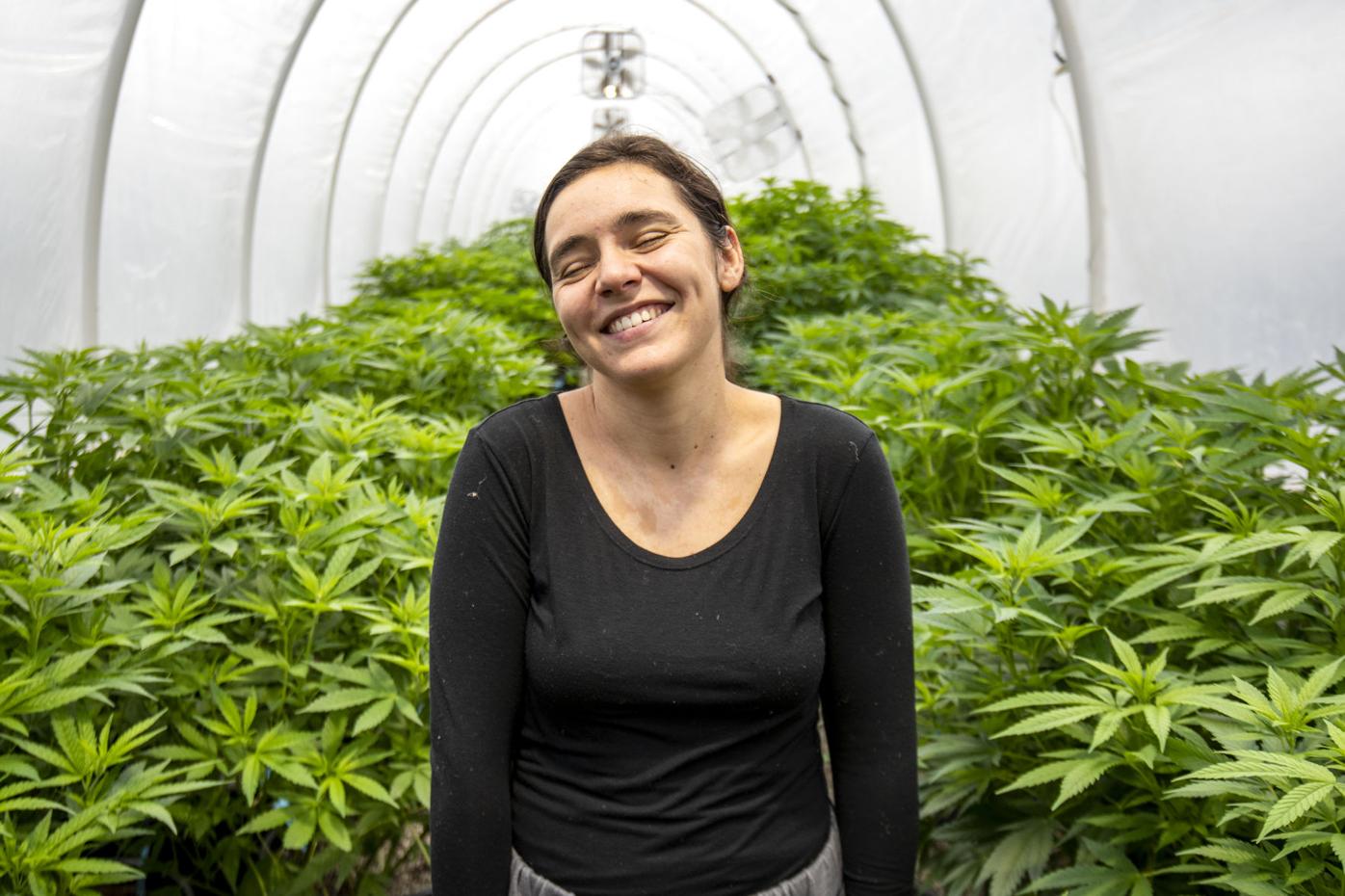 Karen Osovsky, the owner of Next Generation Nurseries, laughs while posing for a portrait surrounded by marijuana plants. Osovsky has been growing marijuana for seven years. Photograph by Eric Woodall 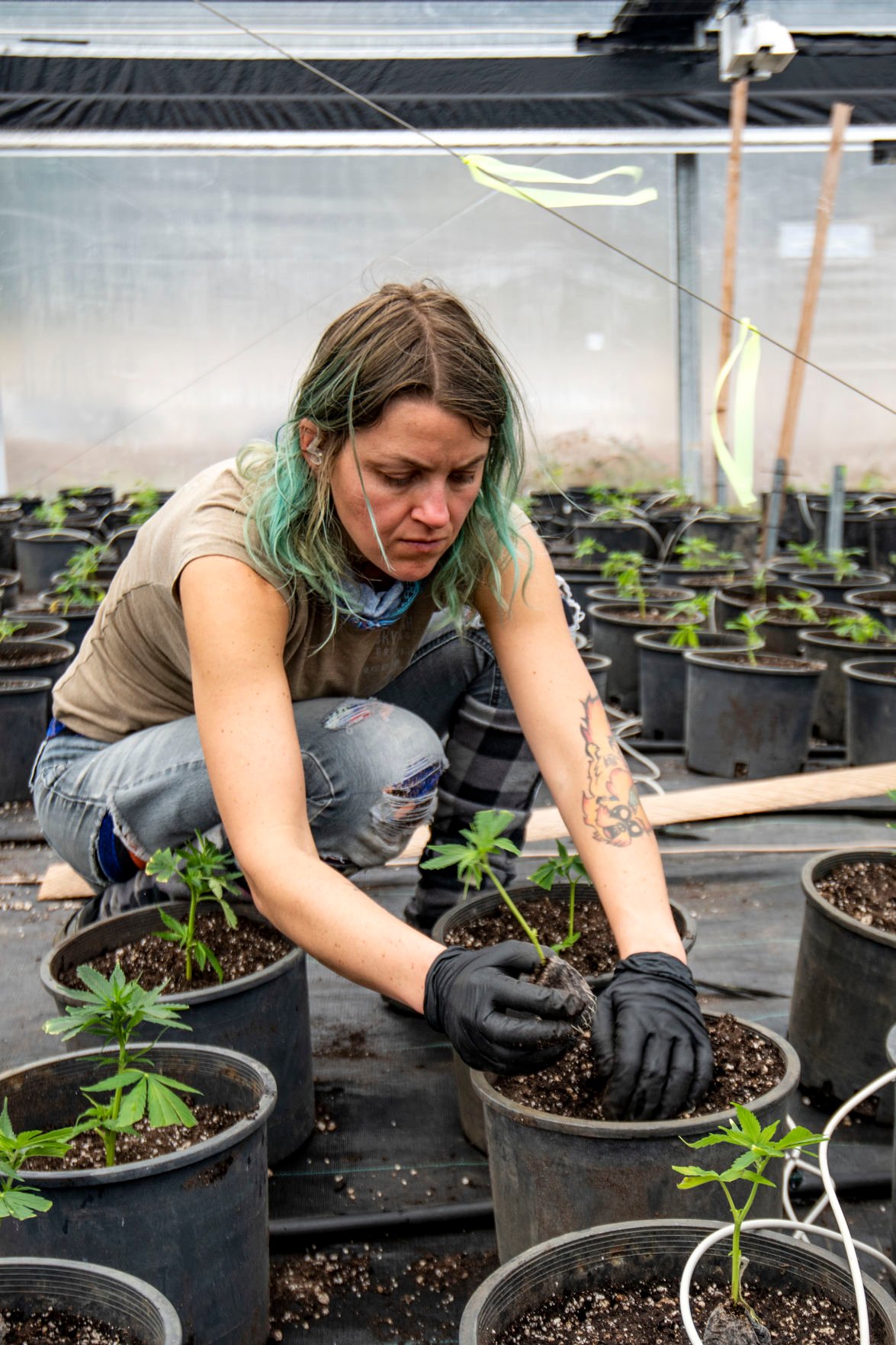 Kiki Love plants a marijuana seedling. Next Generation Nurseries is planting their greenhouse in October when they would normally be harvesting cannabis. Photograph by Eric Woodall

Molly Schwartz is a sophomore studying Journalism and History. At Ethos, she writes about criminal justice, cannabis and the arts. She is from Los Angeles, California. On weekends, Molly writes and performs her own music.

On a frigid October day in Corvallis, Oregon, Karen Osovsky tiptoes around the thousands of pots in the greenhouse of her cannabis farm. Dirt collects under her fingernails as she places seedlings in each pot. Osovsky’s two employees, Kiki Love and Lia Marble, spend a few seconds watering each of the hundreds of plants. Osovsky says she wants to have all of them ready to go by the end of the week so she can have cannabis to harvest in the winter.

Normally, Osovsky would have already harvested crop by October, which is considered “croptober” by farmers – the month of harvest for cannabis.

Now, she is kicking herself over the decision not to plant cannabis over the summer. Because of news of oversaturation in the industry, Osovsky feared she would be growing crops she would not be able to sell – a concern that extended to other farmers in Oregon.

The news of oversaturation came from the Recreational Marijuana Supply and Demand Legislative Report, released by the Oregon Liquor Control Commission (OLCC) in January of 2019. The study said there is "6.5 years’ worth of theoretical supply" in the recreational market.

Since she hasn't planted and has barely sold all year, Osovsky has not been able to pay herself in three months. She says she has received calls from businesses looking to buy the cannabis she has not grown – money that could have helped her settle her finances.

Other farmers who, like her, have not harvested in October, have been selling product that they don't yet have.

“Literally the fact that people are pre-selling their weed is crazy, without even harvesting it,” Osovsky says. Pre-selling harvest is almost unheard of in her seven years in the industry.

To avoid losing money and products in an oversaturated industry, much of the fresh cannabis that farmers had during the surplus was frozen and put into concentrate. This then left more wholesalers or dispensaries looking for fresh flower because the demand for fresh flower is always high. (Flower is industry jargon for the plant that consumers smoke.)

But the lack of planting, cannabis freezing and bad weather decreased the amount of cannabis in Oregon to a point where there is cannabis shortage.

For farmers like Osovsky the cannabis industry is difficult to profit from. The fluctuation in supply and demand in the state is so frequent that farmers do not know whether their business decisions will ultimately ensure their survival.

After the OLCC report, many farmers froze their cannabis and sold it to wholesalers to stay in business. The benefit of frozen cannabis is that it does not lose its potency like aged cannabis can, the chief financial officer and vice president of cannabis farm Cannassentials Myron Chadowitz says.

Wholesalers used the frozen cannabis to create rosin for dabs. Rosin is cannabis extract that is created without adding chemicals by using heat and pressure. Dabbing is how the concentrate is smoked. This is smoked with a weed vaporizer or a rig. It delivers a more potent and immediate high. Chadowitz says many farms sold their frozen cannabis to wholesalers who used it for processing to make rosin because of high demand.

Chadowitz did it because it was a way to make money.

The surplus heavily affected his business at first. He was unable to pay himself and his bills. He says he worked on “scraps and pennies” to run Cannassentials. Every week, Chadowitz and his business partner considered cutting their losses, but they were always somehow able to make a sale. Ultimately, they ended up freezing the flower they were unable to sell to go into extract. Cannabis extracts are used for dabs and weed pens, devices that heat up extract and produce vapor.

Besides being able to make a profit out of the frozen cannabis, Chadowitz says that most farms do not want to sell old cannabis with their name on it.

The extracts are partially what may have solved the industry oversaturation, OLCC's recreational marijuana spokesperson Mark Pettinger says. Much of the produce has been put into extracts, which dramatically decreases supply, he says.

Toby Gamberoni, a grower from one of Eugene's cannabis farms Gaia’s Garden, says dispensaries are always looking for something new which helped farms stay in business during the oversupply of cannabis.

There has been demand for extracts recently. In August 2019, almost 700,000 units of concentrate or extract were sold, according to the Metric Cannabis Tracking System, which tracks cannabis inventory in Oregon. This demand came in the form of almost 1 million sold units of extract.

Along with extract, Chadowitz says that bad growing conditions over the summer have affected the current supply of cannabis in Oregon. Many farms lost their October crop to frost damage or mold.

"Many farms were unable to sell quality cannabis,” Chadowitz says. “People harvested late and it's dried out. People lost their crops. People lost their jobs, lost tons of loans. Instead of having this massive influx of decent weed, there was this very slow, incremental still going on, influx of some good, some bad.”

Over 50% of the cannabis planted in October was lost to to mold or frost damage, Osovsky says. The summer of 2019 was colder and more rainy than usual, which makes cannabis more susceptible to mold. Most farms in Oregon are outdoor which makes protecting plants from mold more difficult.

Despite what farmers say, there may not be an undersupply anymore. OLCC's Pettinger says that the slump of supply is now gone and the industry is back at oversaturation. In the most recent record from the OLCC, the amount of cannabis has a wet weight of almost 2.9 million pounds of cannabis. (Wet weight is the weight of cannabis before it is dried out.) This is record weight since Oregon legalized recreational cannabis.

Pettinger says the OLCC cannot verify if the 2.9 million pounds include waste or bad quality cannabis.

And the wet weight of harvested crops does not represent cannabis that can actually be sold, Osovsky says.

This is an example of the uncertainty in the cannabis industry. It is a constantly fluctuating market, Osovsky says. The jumps between undersupply and oversupply are normal. This makes the cannabis industry difficult to profit from. At the end of the day, Gamberoni says, farmers just want to be able to pay their wages and support themselves. They continue farming because they are passionate, says Chadowitz.

“It's much more of a passion than money play. I think that's why we continued,” Chadowitz says.

Most of Osovsky's success has been based on making the right business decisions in an unstable market.

“Sometimes you fail and fall on your face, but it's just a learning process,” Osovsky says. But she also says her business has gotten better, and all of her time is dedicated to her farm.

She says she is hopeful for her next harvest, which will be ready to harvest this winter.

Osovsky often considers leaving her business. But she says she is not ready to give up.

“I have times when I just want to leave. I want to be done. But I've invested so much of my life here that I don't," she says. "I'm not really ready to do that. And I see the potential for it. We just have to make the right decisions to get to that.”

Osovsky, Love and Marble frantically water each plant for the next harvest. They do not stay at one pot for too long. Sweat drips from their faces and dirt clings to their hands, all to ensure they will be done planting by the end of the week.

Whether Osovky’s hard work will pay off and the harvest will be profitable is unknown. The cannabis industry may be in an undersupply now but that may change in a few months as more farmers like her plant more to make up for this year's losses. In an uncertain industry, every move is a risky bet.