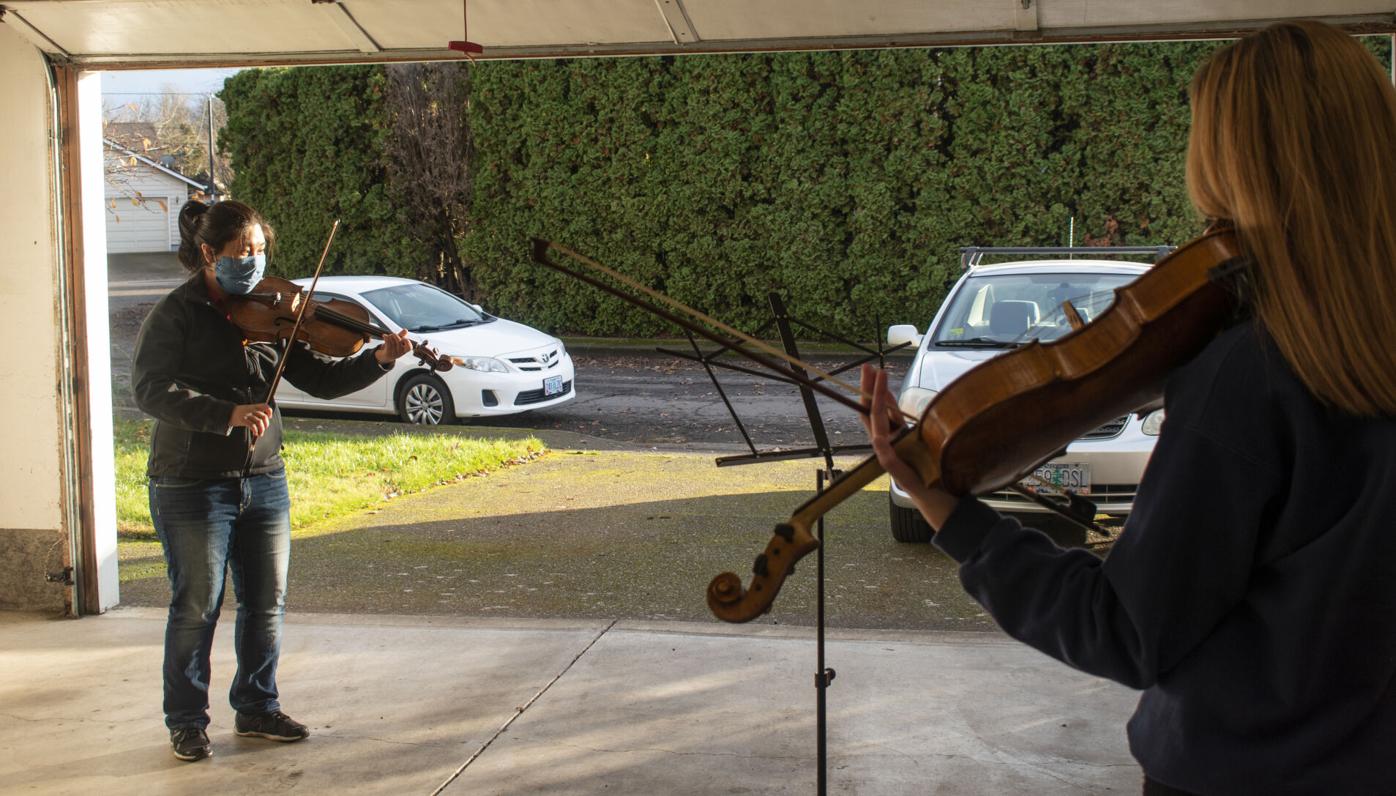 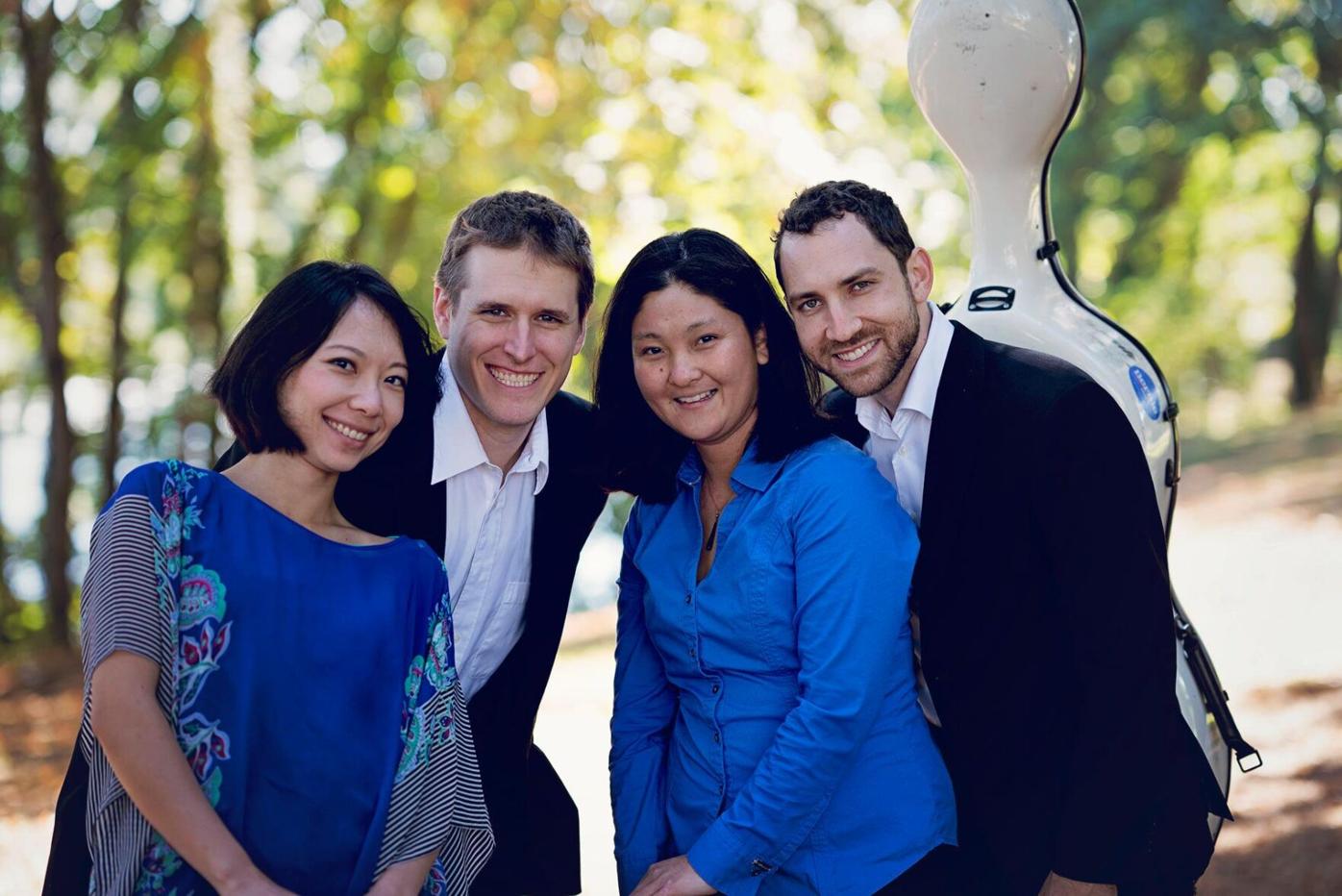 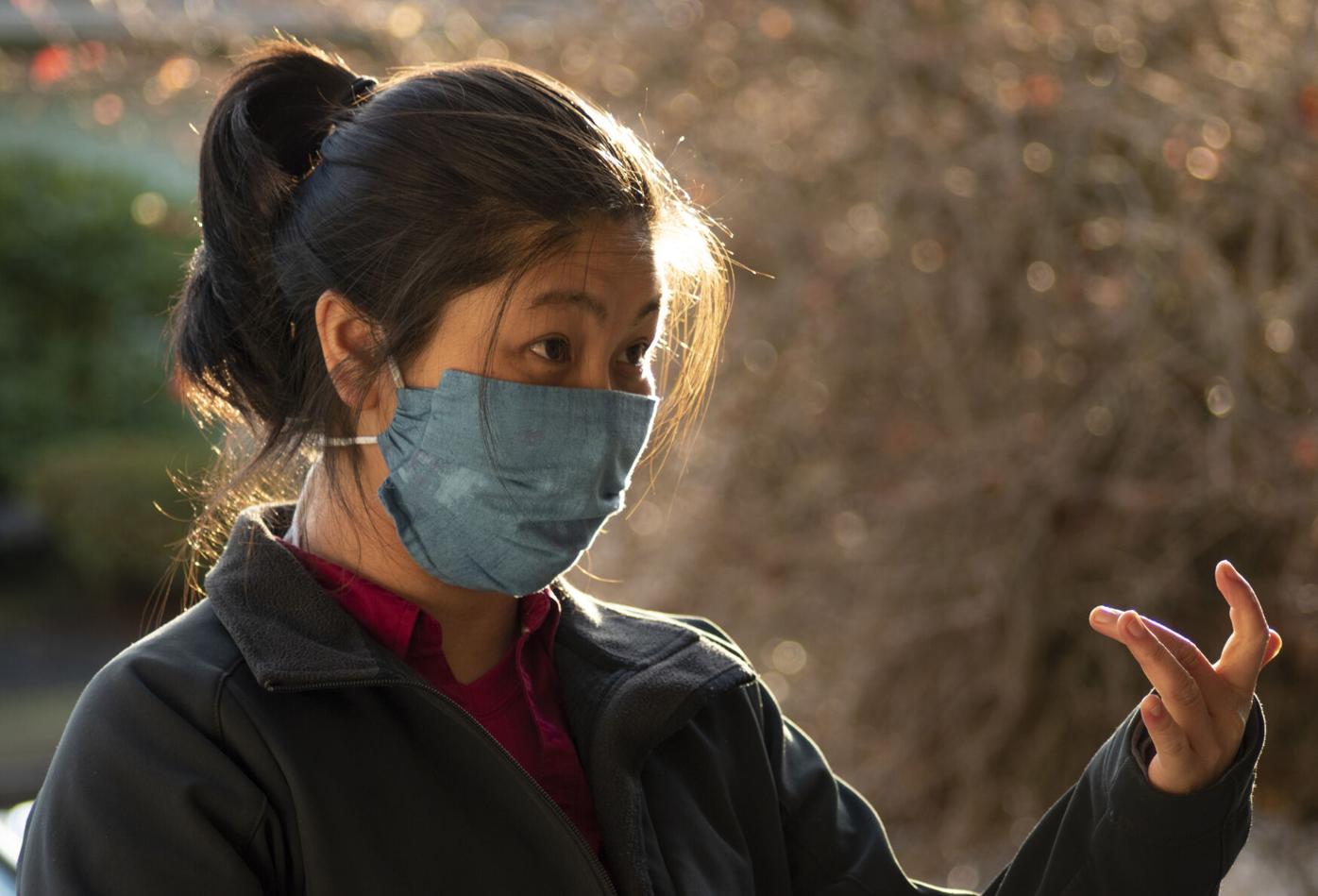 Uwate shows one of her students a viola hand position during a socially distanced lesson in her garage, where she has been conducting private lessons since the pandemic started. “For me, teaching and performing are two sides of the same coin,” Uwate says. “The process of understanding and loving a piece takes time, but in both teaching and performing, it is a communal experience that nourishes everyone involved. 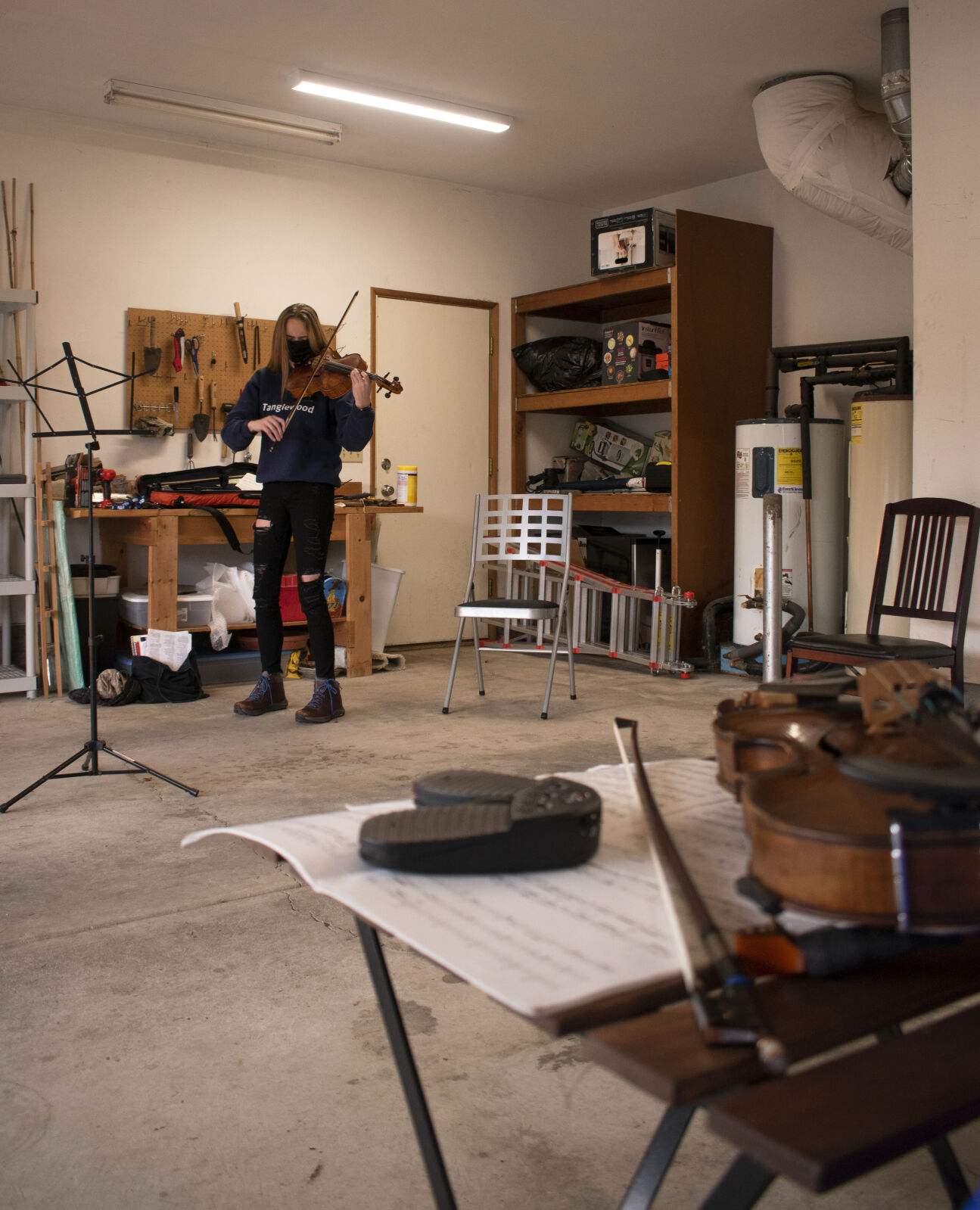 Katie Siegfried tries to visualize a live audience in front of her, per Uwate’s instruction, as she plays “Viola Concerto” by William Walton. Siegfried has been rehearsing for this piece for over a year for her upcoming college auditions. “I’ve been playing viola since I was five years old,” she says. “So I guess I’ve been playing for almost 12 years.” 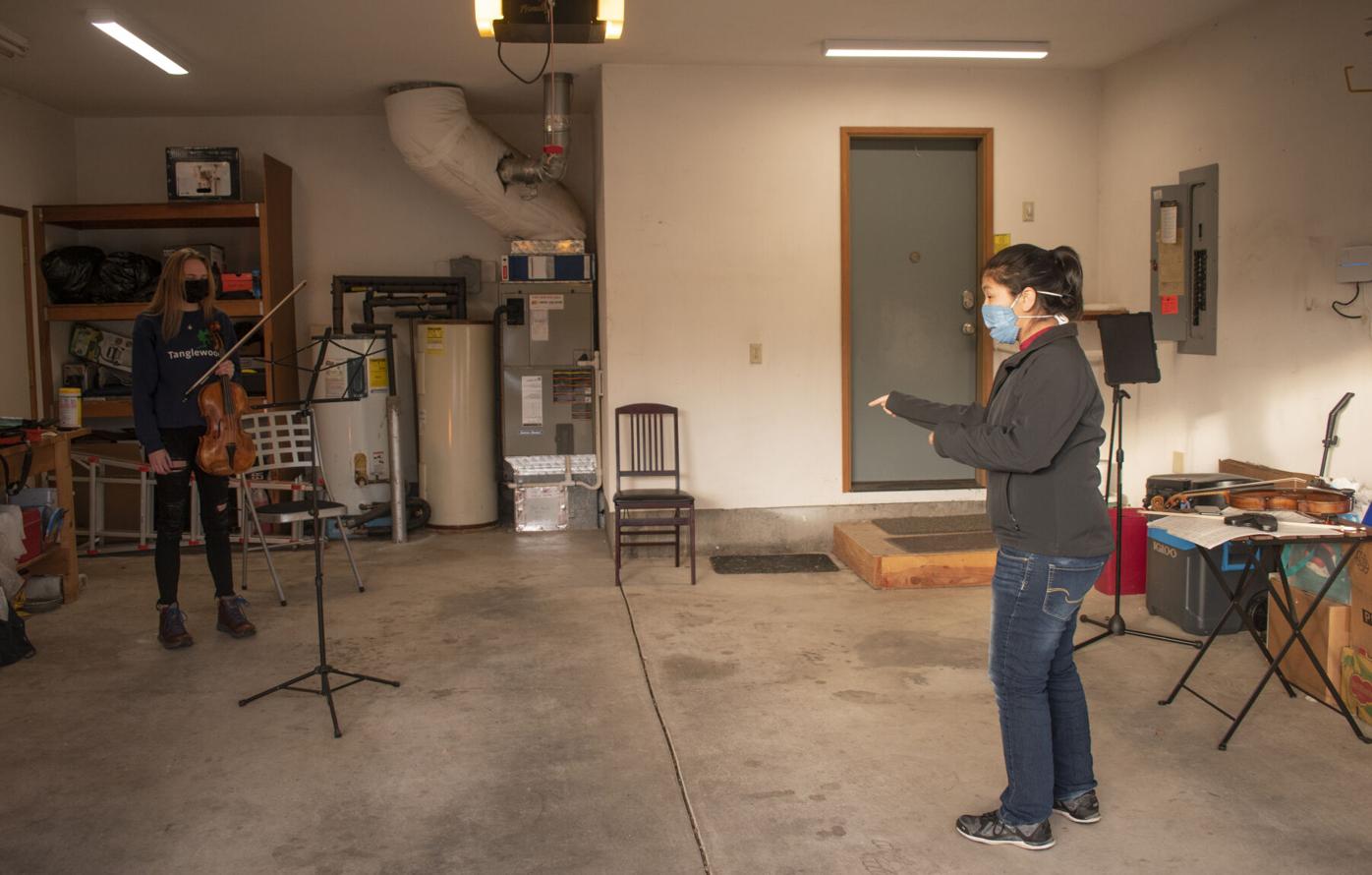 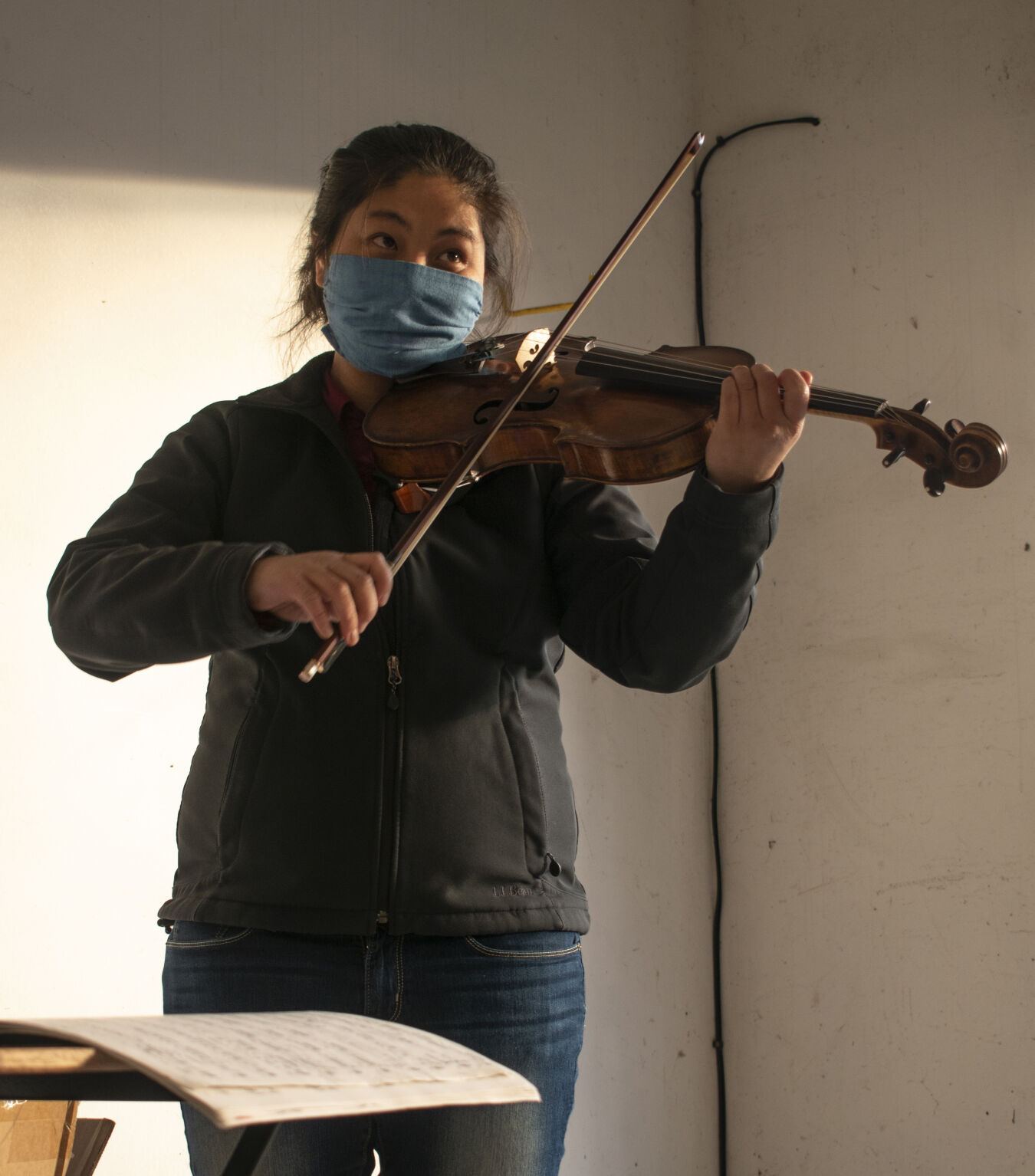 Despite the technical difficulties and learning curves that come with meeting and performing virtually, Kimberlee Uwate says the reaction from the community has been overwhelmingly positive and full of support. “I’ve been really, really happy with and really impressed with how people have stepped outside of their comfort zones in order to adapt to what it is that we’re doing,” she says.

Kimberlee Uwate, Jannie Wei, Wyatt True and Eric Alterman sat together with their instruments in hand on a platform at the altar of a church. It was late October, and soft beams of afternoon sun shined through the floor-to-ceiling windows. The Delgani String Quartet began to play. Melodic sounds filled the church. Two violins, a viola and a cello joined in song.

Masked concert-goers sat among mostly empty chairs. Crepe paper streamers blocked off rows of seats to ensure social distancing. A camera was set up at the back so the concert could be livestreamed.

It was not unusual for the Church of Christ, Scientist in Eugene, Oregon, to be filled with music before the pandemic. The members of the Delgani String Quartet were well acquainted with the space. Its high ceilings and wooded accents created good acoustics. There were plenty of seats for Delgani’s large community of patrons.

They have played many shows here in the past, but this time was different. This was Delgani’s first in-person concert since the beginning of the pandemic.

Uwate, the quartet’s violist, says she found it jarring to see the space so empty. “We couldn't gather as we normally do,” she says. “We couldn’t have the same energy of a concert that we usually have.” Still, Uwate says she felt grateful to be playing at all.

Despite the challenges caused by COVID-19, Eugene’s Delgani String Quartet is providing comfort and community in a time when it’s needed most. Through virtual concerts and socially distanced events, the quartet is bringing people together to share in music.

The coronavirus pandemic made it impossible to safely enjoy music in social settings like before. Many music venues, concert halls and festival grounds shut down indefinitely, so people went online for this connection. In the first half of 2020, revenues from music streaming platforms grew 12 percent to $4.8 billion from $4.3 billion in the first half of 2019. Increases in subscriptions for services such as Apple Music, Spotify and other online music providers contributed to this spike.

Musicians also found creative ways to bring live music to people virtually. Symphony orchestras live streamed their performances. The New York Times, along with other publications, began posting monthly articles that provided information about classical concerts to look forward to in the near future. Musicians used social media platforms to livestream themselves playing. Artists sang from rooftops around the world.

Zachary Wallmark, a musicologist and University of Oregon professor, says music can help us feel connected to others, even when it’s virtual. Wallmark studies the relationship between music and social cognition. His most recent research project focused on the connection between music and emotion. He notes that there are overlaps between how our brains process music and interactions with others.

“Music can kind of serve as a virtual substitute or a virtual social contact or social encounter. Listening to music, even if you're alone, is bringing somebody to you,” Wallmark says. “It's bringing human emotional intentions and agency straight to you, even though you're not physically together in the same space.”

Historically, humans were only able to share music with each other in person through singing, musical instruments and dance. “We have hundreds of thousands of years of evolutionary history that is positioning music as essentially a social human activity,” Wallmark says. Today, technology makes it easier to find this connection virtually.

“Part of the reason why I'm a classical musician is I like the fact that I don't have to be plugged into power in order to play my instrument,” Uwate says, chuckling. But in 2020, all musicians have had to become video producers, audio engineers and IT experts.

Live streaming has been crucial in Delgani’s effort to stay connected with their patrons. They now offer live-streamed concerts and virtual lectures about composers and classical music history to all of their season subscribers. Patrons simply go to the Delgani website and enter their password to see the embedded videos.

When the weather was warm during the summer, they also played in parks. This concert at the church was their first live event inside since the start of the year.

Uwate found that this same determination to connect through music translated into her personal musical endeavors. For many months the quartet couldn’t rehearse together. They didn’t have to be in the same room to create a lot of their online content. To practice for their concerts, they met outdoors or in big spaces with masks on. But Uwate found herself with ample time to practice alone. She played a few solo concerts for friends in front yards and driveways.

She has also been holding virtual private lessons for her viola students. This transition to online lessons came with challenges. Some students only have low-quality computer microphones, which makes it harder for Uwate to hear, but she tries to use visual cues to let them know what needs changing.

“You cover what you can cover,” Uwate says. “The goal is to have the students be making the progress they can be making.”

Katie Siegfried, one of Uwate’s students and a senior at South Eugene High School, says she’s still glad to learn virtually but struggles with missing the in-person connection of playing music. After months of virtual lessons, the pair met outside — socially distanced and with masks on — for in-person lessons. Siegfried remembered what it felt like to see Uwate again.

“I almost cried when I got back into my car after my lesson,” Siegfried says. “It was the first time I had played with another human being in months. It was really wonderful.”

Siegfried’s emotional response highlights an important gap between in-person and virtual music experiences. Wallmark likens it to the problems educators are seeing with online learning. “This is vividly exposing the irreplaceability of actual human copresence,” he says. “It’s a bit like junk food.” We can get by with online music experiences, but it doesn’t quite replace the real thing.

Uwate says it’s better to try to fill the void of connection than not try at all. “Anything we do is so much more than nothing,” she says.

The concert at the church gave the quartet a chance to connect and comfort their patrons. They played familiar pieces by Haydn and Beethoven and Shostakovich in an effort to provide a sense of comfort in a time where much was uncertain.

There were only a handful of people in attendance at the concert. John Lundblade, a friend of Uwate's, found it emotional to hear live music in person again. “Just to hear those pieces actually played by somebody and not just listening to a recording is the lifeblood of it,” Lundblade says.

For all the masked patrons the quartet played for in the church, there were also people they didn’t see: those who watched behind computer screens and listened through speakers. After the concert, one of their patrons emailed them to say that she felt like the quartet had actually played in her living room, not just through a screen.

Days after the concert itself, Mary Pugsley and her husband listened to sections of the recorded livestream in the comfort of their Eugene home, replaying parts of the program they enjoyed. The pair met Uwate almost five years ago.

When the pandemic started, they made a list of things they could do that would be good for the brain and soul, Pugsley says. They turned to Uwate’s classical music lectures and the live streamed concerts to learn and connect.

3,000 miles away, Siegfried watched the livestream. She was in Baltimore to visit colleges, but stayed up to watch on her computer from her hotel room. She recalls the moment being bittersweet. “I wouldn't trade the experience of sitting in a concert hall for anything,” Siegfried says. “But I would rather be watching someone play than not watching someone play at all.”

Each individual — although separate — shared this singular music experience.