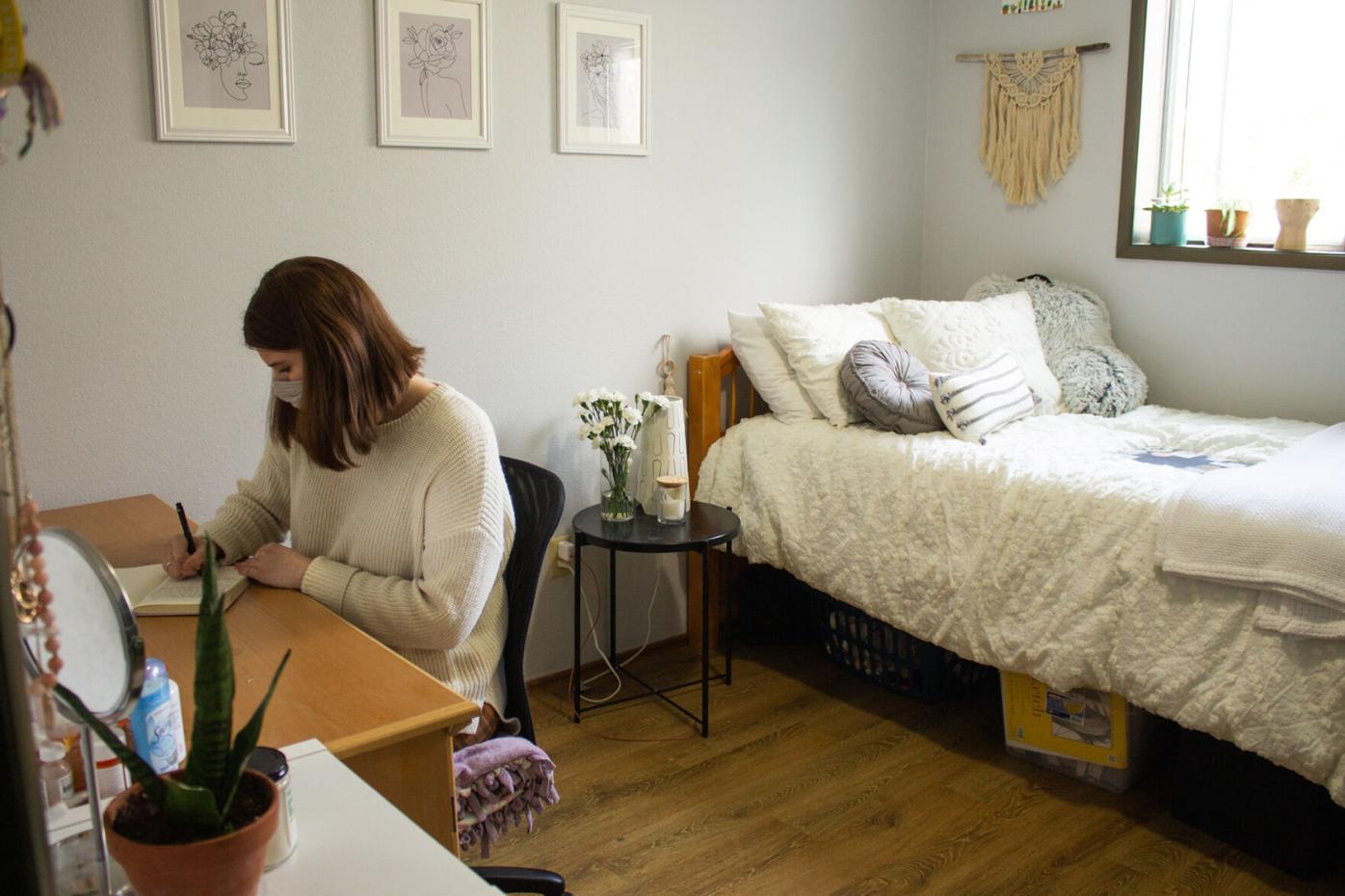 “My journal has been such an outlet for me. It doesn’t talk back and there is so much self reflection that takes place when writing,” says Maddy Niese. “I am able to hear my healthy voice better when journaling, I feel that I can better discern between ED thoughts and my soul self.... I journal the good times when I want to remember the joys of recovery. I also journal the times when I’m struggling and it is very cathartic.” 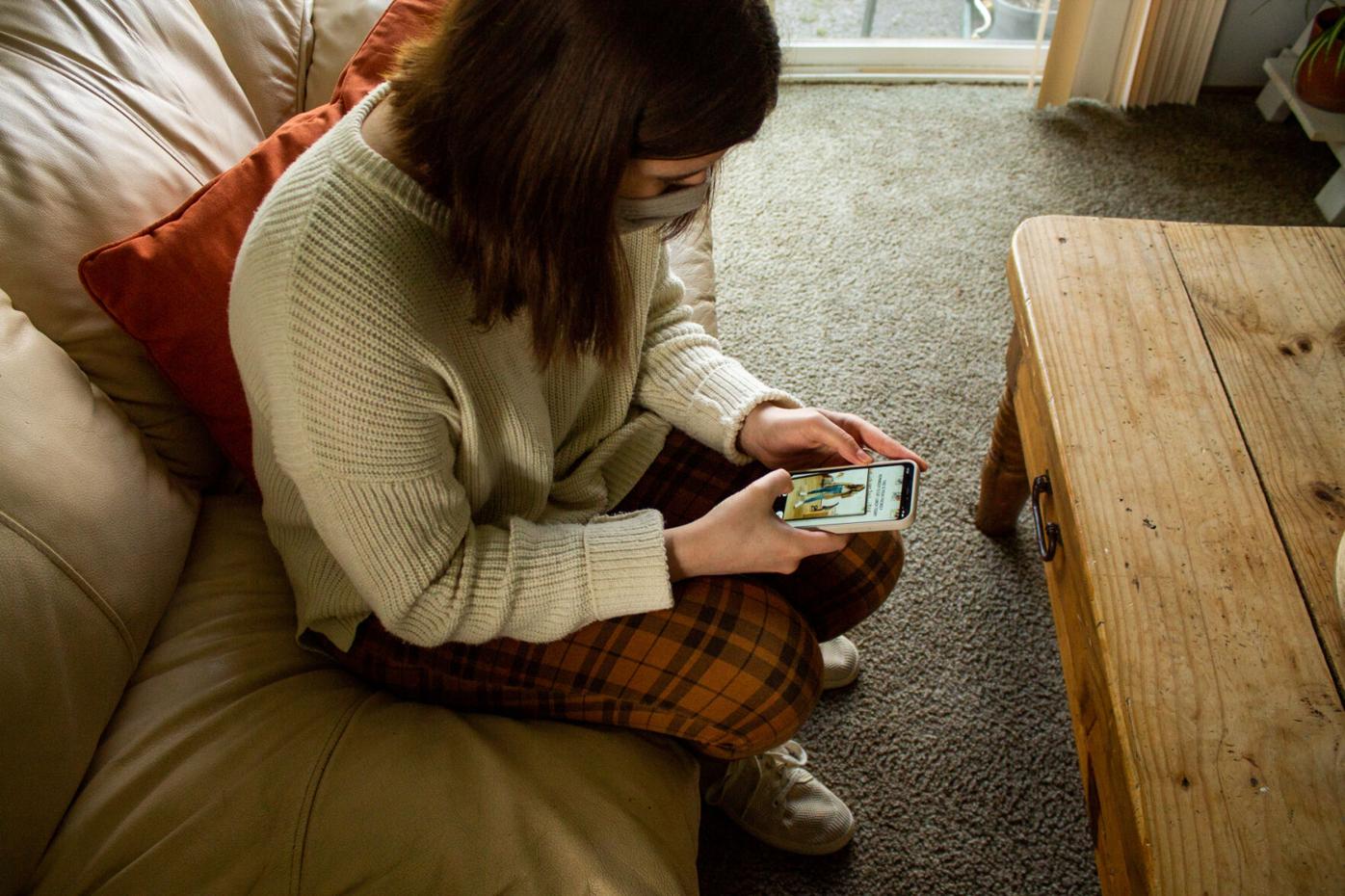 Niese posts to her Instagram account, @maddysrecoveryjourney, to share her journey and inspire others struggling with disordered eating. She posts images of herself, the food and coffee she loves and daily reminders to her followers like this one: “This is your daily reminder to eat lunch today!” 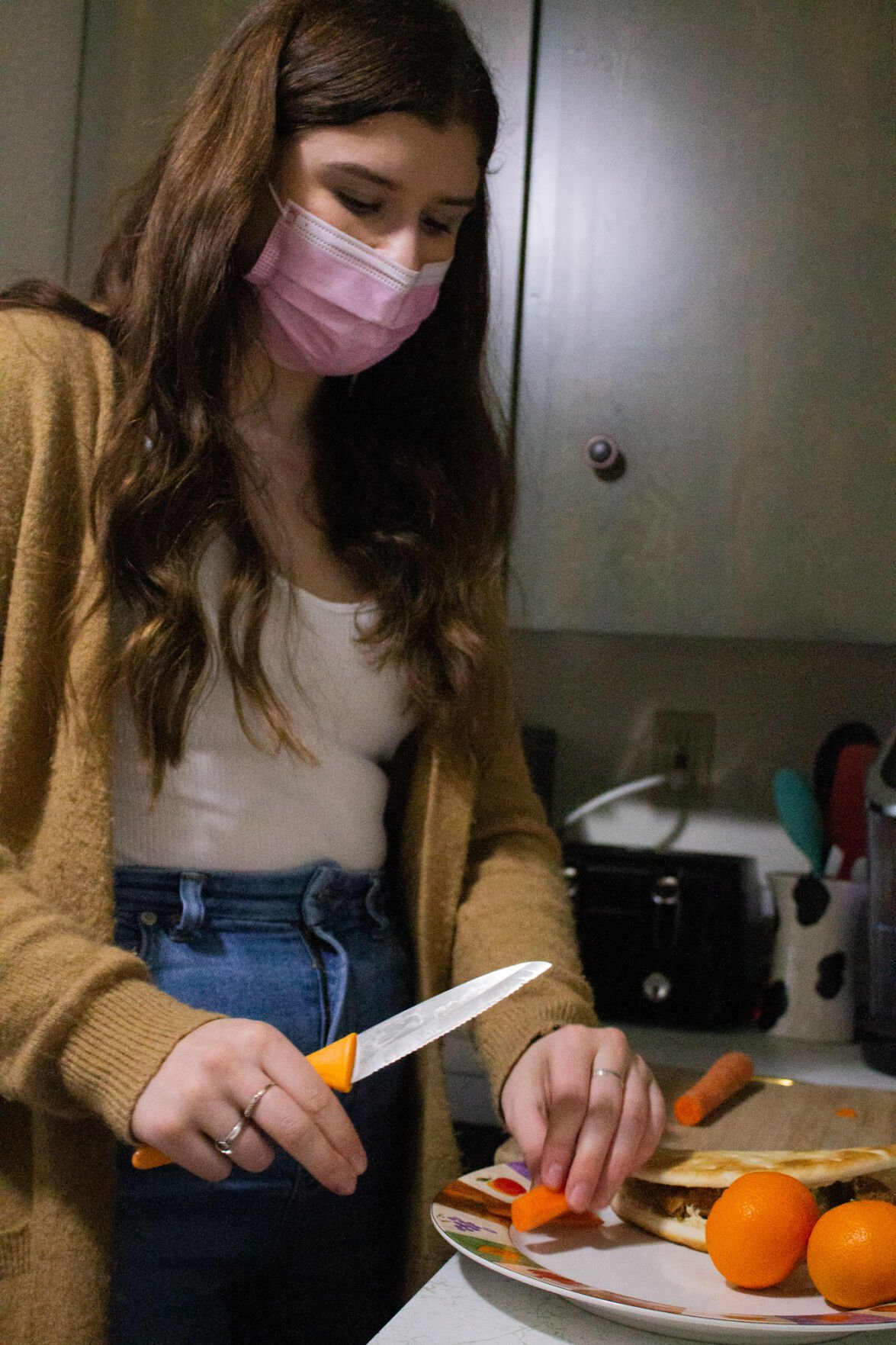 Niese prepares one of her go-to lunches: pita with hummus and falafel. She says she prefers vegetarian meals, but that even being vegetarian or vegan can be dangerous for disordered eating. “People often fall into traps,” Niese says. “Sometimes people in recovery will be vegan or something, and that can be really dangerous just because when you have an eating disorder, you typically have foods that you try to avoid.” 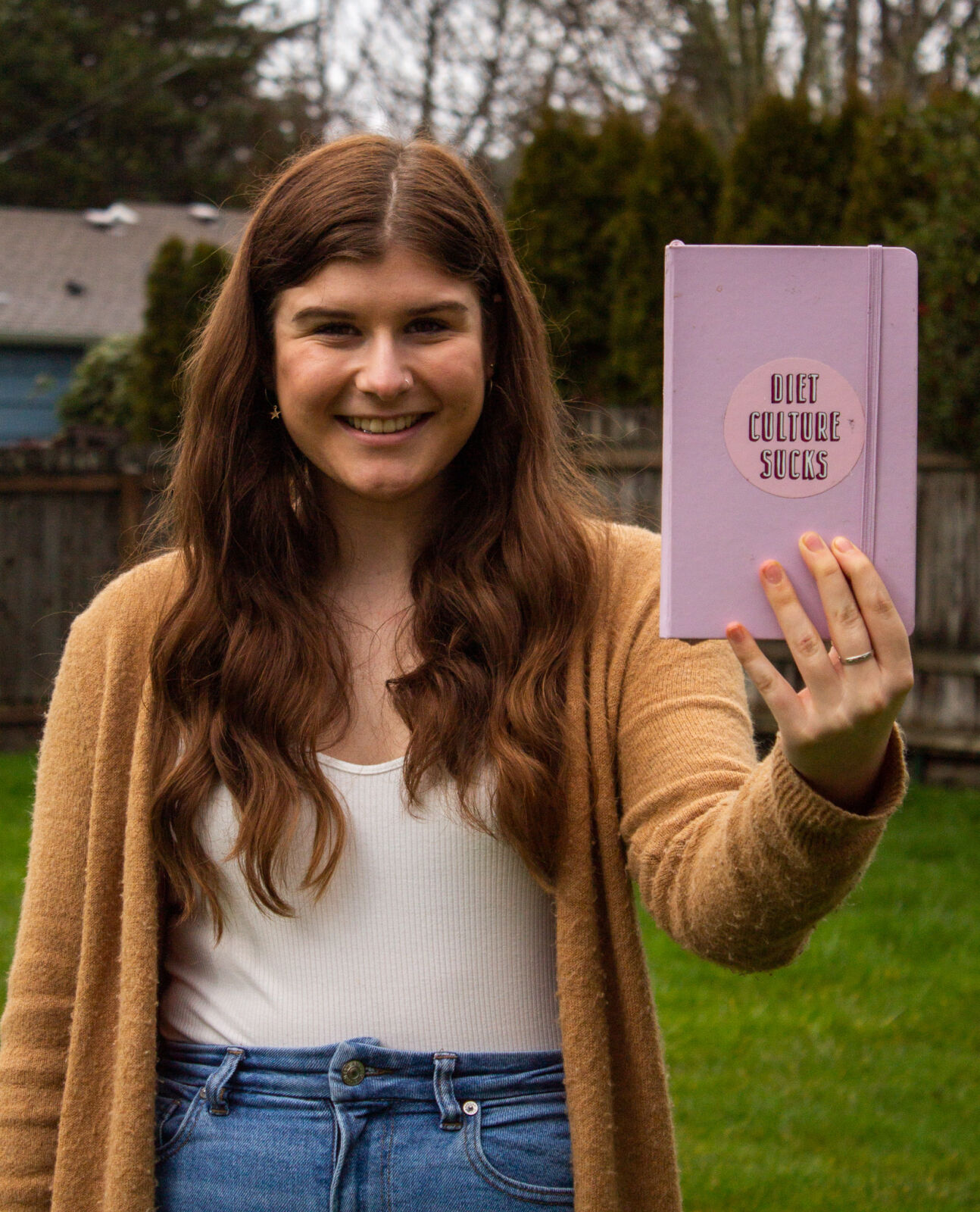 Dieting and healthy eating movements are prominent on social media and can be harmful and triggering to those struggling with eating disorders,” Niese says. “I think that the rise in veganism and health movements has really contributed to it. I hate diets. I like to consider myself anti-diet.”

It was a bright June day when 19-year-old Parker Rosay-Miller felt a familiar dizziness. When she stood up to get out of her car, a wave of lightheadedness that felt like TV static rolled over her. Her head pounded.

The feeling started during a 15-minute drive to her boyfriend's house. She felt weak in the car, but the dizziness didn't hit her until she stood up. It continued throughout the day whenever she'd stand and sit.

Rosay-Miller remembers promising herself that she wouldn't eat until dinner. She thought that the feeling of hunger and faintness was a promising thing, a sign that she was on the right track to reach her weight-loss goals.

That visit in June was the first time she'd seen her boyfriend's dad in months. He and Rosay-Miller were very close. He called her the daughter he never had, and she wished him Happy Father's day. When he saw how much her body had changed, he was worried.

"He kept commenting about how thin I looked. I've never seen him concerned," she says. "That made me realize there was an issue."

Her physical appearance shocked him because, unlike her closer family and friends, he didn’t see her every day. That day was a major indicator to Rosay-Miller that she finally needed to get help.

University of Oregon sophomore Rosay-Miller is one of the millions of people struggling with eating disorders right now. The external stress and isolation caused by the COVID-19 pandemic have caused her, and many others, to relapse into body-insecurity and disordered-eating behaviors.

Increased stress during the pandemic has caused eating disorders to worsen nationally. The International Eating Disorder Journal conducted a study that revealed 62% of people with anorexia experienced an increased fear of food since the pandemic started. Nearly a third of people who deal with bulimia or binge-eating disorder have also had an increase in symptoms. The National Association of Anorexia Nervosa and Associated Disorders reports that 28.8 million Americans will have had an eating disorder in their lifetime.

According to the National Eating Disorders Association, people who deal with a lot of external stress sometimes use food as a coping mechanism because it offers feelings of comfort and control.

Rosay-Miller first noticed a change in her mental state in March 2020 during the first wave of infections. She says she was dealing with an emotionally abusive relationship with her boyfriend at the time, and she was also one of the many freshmen sent home from the dorms spring term. Being away from friends made it difficult for her to find support when her relationship started to take a turn for the worse. For Rosay-Miller, part of her pandemic stress came from her inability to go out or do anything to distract from the chaos happening around her.

“At those points, I definitely turned to the eating disorder for coping skills. I just thought it was the only thing that could have actually helped," she says. "It was super traumatic and unhealthy."

Compounding stress-filled situations often exacerbate disordered-eating behaviors, according to Nichole Kelly, an assistant professor at the UO College of Education who researches eating behaviors and body image. Kelly says that feeling depressed, anxious or chronically stressed can be related to different disordered-eating patterns. There haven't been many studies done on how the COVID-19 pandemic has affected eating disorders yet. Still, Kelly does know, based on data from previous studies, that stress and eating-disorder behaviors directly correlate.

"Feelings that we don't like, that are uncomfortable and that are distressing to us are prominent risk factors for disordered eating," she says. "There's no reason not to think that living through something like this would exacerbate disordered eating."

The stress that accompanied the pandemic only provoked issues that Rosay-Miller had been dealing with since early childhood. Her past with body insecurity resurfaced during the start of the pandemic.

The first time she says she felt aware of how her body should look was when she was nine years old, walking back from the lunchroom. She was wearing leggings and a crop top, which accentuated her body's shape. She put her hand on her stomach and felt it protrude. Her stomach was bloated after lunch, a natural reaction after eating. Rosay-Miller sucked in and manipulated her body so that she didn't bring attention to herself.

"I felt like people were just looking at me," she says. "And I felt like I needed to continue the standard of what I've always looked like."

Rosay-Miller says that she was always aware that she thought of food and her body differently from other kids her age. She'd often been told that her body was beautiful and perfect while growing up. This was difficult for Rosay-Miller because it convinced her that beauty was the most important thing about her. It was a constant thought that existed in her mind from childhood through college. Those compliments brought a lot of social pressure.

"I never brought it up to anybody. I didn't think that it was that big of a deal because I wasn't emaciated," she says. "People constantly comment on my appearance. And I think I internalized it as the only thing that matters for me."

Her eating-disorder behaviors during quarantine started innocently. She wanted to go on a couple of runs here and there after not exercising much during her in-person education. But then it got a bit out of hand.

"It was almost subconscious at the beginning," she says. " I started tracking my weight with the scale. I started to realize what I was getting into, but I still couldn't stop."

She says that part of the reason why she started developing unhealthy behaviors was from the pressure online to be thin. Headlines like, "Tips for Staying Fit During COVID-19" and "The Pandemic Diet: How to Lose the 'Quarantine 15" have had an increased circulation around the internet recently. Headlines like these or social media posts about “thinspiration” are major contributors to body insecurity, according to Project Know, a national directory for addiction resources created by the American Addiction Center. The website says that while social media itself doesn't give someone an eating disorder, those platforms can facilitate comparisons and competition.

"It's like just another thing on top of every other person telling me to look attractive," Rosay-Miller says. That pressure worsened for her during the pandemic. "Take the terrible parts of social media and increase that frequency and intensity by a million."

Maddy Niese, a 20-year-old Oregon State University student, struggles with navigating social media's weight loss culture. She uses her Instagram, @maddysrecoveryjourney, to show the intimate parts of her recovery from her eating disorder so that others won’t feel alone. Niese started the account in September 2020. She says she wanted to use her account to keep herself inspired in times of self-doubt. Niese also wanted to start a conversation about eating disorders in general and let others see the world of the slippery slope of healing.

"Diet culture is everywhere," she says. "I don't want to log on and see someone posting about calories or a healthy version of a drink or something like that. Curating my feed to be body-positive has been really important."

Like Rosay-Miller, Niese has a long history of eating-disorder behaviors. She's been in and out of recovery for more than nine years. Her past experiences were amplified by pandemic-related stress and social pressures. The transition to online school was one of the biggest hurdles for Niese. She refers to it as "an insurmountable amount of stress."

Treatment for Niese and Rosay-Miller were two very similar processes. Both included online outpatient treatments, which consisted of virtual Zoom meetings where patients would eat meals together daily. Rosay-Miller says the best thing about the outpatient program was the structure it provided.

For Niese, the inpatient program process was difficult because of the COVID-19 pandemic. For a while, she had to go into a facility because of the severity of her condition. She says many people lived in the same house, which made it hard to enforce proper social distancing and COVID-19 prevention protocols.

"There's also a huge waiting list," she says. "There's just so many people reaching for those resources."

She urges others who've been fighting a similar battle with eating disorders to reach out for help. Even if someone isn't diagnosed with an eating disorder, Niese says, many people might be struggling with unnoticed unhealthy habits.

"I feel like a lot of people, even if they don't have an eating disorder, have an unhealthy relationship with food or exercise," she says. "I want to be able to share what recovery is really like. It's not about eating your food. It's so much more about finding your identity as a human."

People of every age, race, gender identity, sexual orientation and background are subject to unhealthy eating-disorder behaviors, according to the National Association of Anorexia Nervosa and Associated Disorders.

Niese says that eating disorders, similar to any other mental illness, are not a choice. However, she also says those who are struggling always have the option to choose recovery.

"People should not have to be worrying about their weight right now. We are in a global pandemic," she says. "I almost want to say this to my past self: It is possible. It is possible to live a life of freedom."

Anna Mattson enjoys writing human focused pieces about climate change and social justice— two of the most present issues in today’s world. You can find her making lattes, reading short fiction or exploring everything from glaciers to deserts.