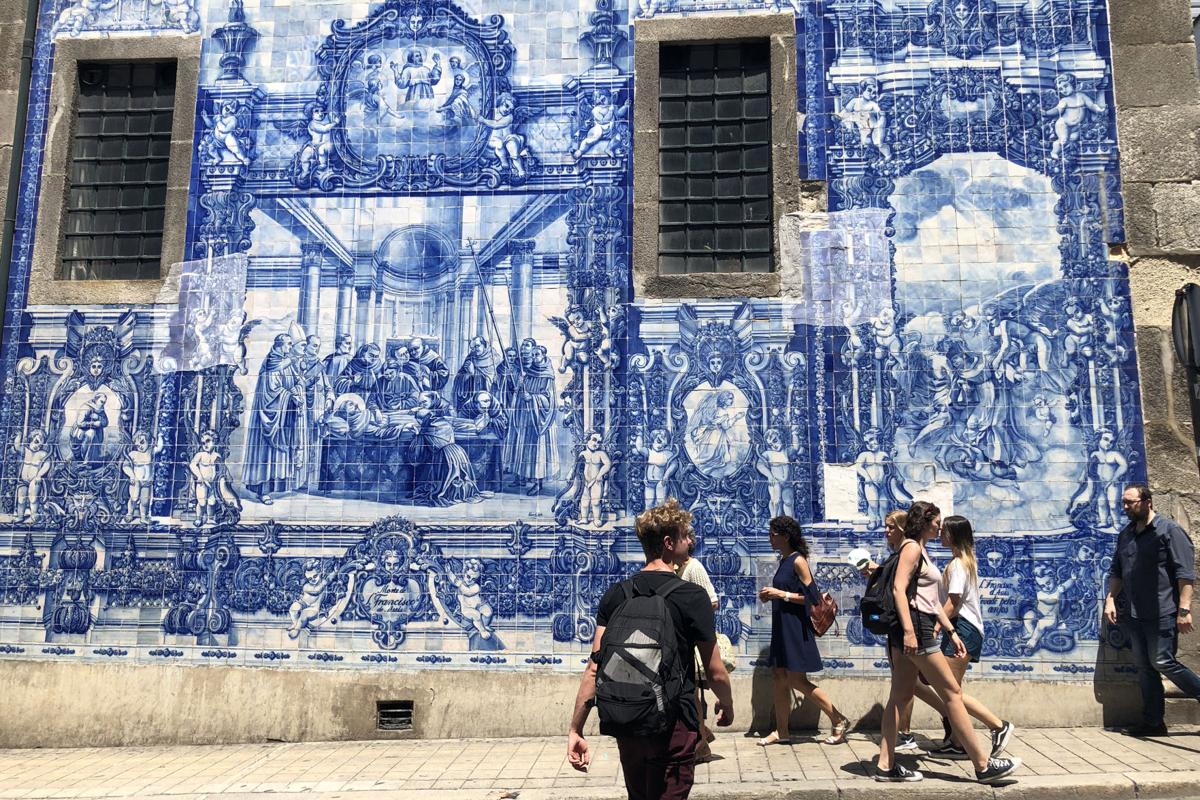 A wall of the Chapel of Souls stands next to the busy Santa Catarina street in Porto, Portugal. The mosaic depicts scenes from the lives of various saints using the blue and white azulejo tile style. People from all over the world come to Porto to see these mosaics. Photograph by Jade Yamazaki Stewart. 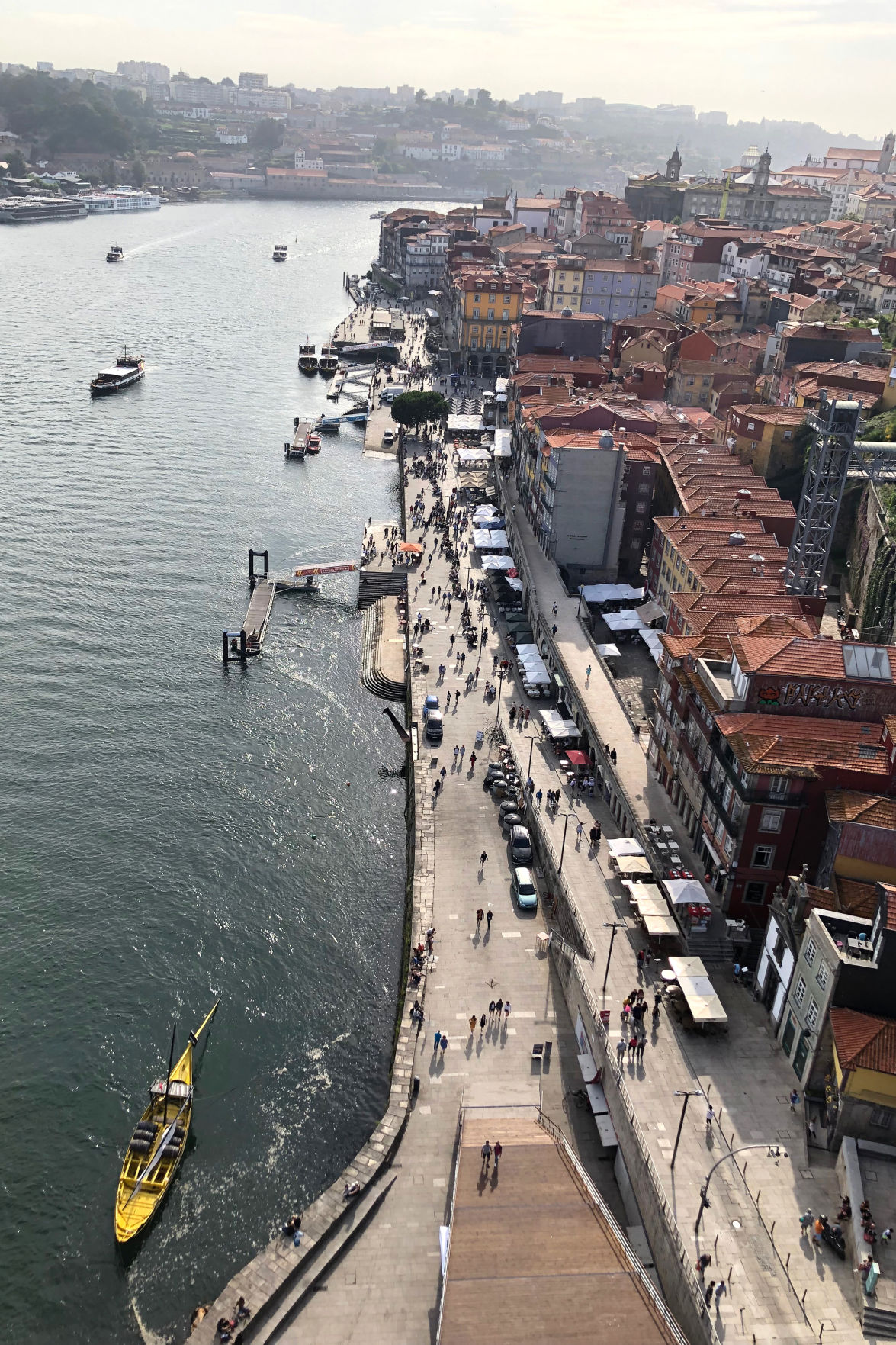 Restaurants and bars line the north bank of the Douro river in Porto, Portugal, near the Dom Luis I Bridge. Boat tours for tourists are available at docks along the river. Photograph by Jade Yamazaki Stewart.

“Fuck Tourism” is scrawled in white cursive letters across a Pizza Hut advertisement pasted to a dirty white wall next to the south bank of the Douro River in Porto, Portugal. The words run across a blown-up photo of the picture-perfect pizza pie, the letters a finishing garnish for the pepperoni, bell peppers, mushrooms, onions and cheese on dough.

A two-minute walk downstream, Sandra Baul, an olive-skinned Porto local with smile wrinkles next to her eyes, sells jewelry at an outdoor market on a July afternoon. She is wearing a loose blue dress and the sunlight glinted off her dangly gold earrings and the five bracelets on her right wrist.

The people who wander up to her white pop-up tent where she sells her hand-crafted turquoise and amethyst rings, necklaces and bracelets are all visitors from outside of Portugal. She says that the riverfront market where she works opened ten years ago to appeal to tourists, and that it grows larger every year. It now houses a few dozen booths lined up on either side of a pedestrian street. Most of the vendors sell cork notebooks, lighters and keychains printed with images of Porto.

Baul enjoys talking to people from other countries, and she enjoys taking their money. But she admits that tourism in Porto has made life difficult for many locals.

Close to 12 million people flew through Porto’s Sá Carneiro Airport in 2018, according to the Airports of Portugal website. That’s a lot of visitors for a city that doesn’t even have 300,000 permanent residents.

Invading travelers thirsty for the city’s famous port wine, hungry for its exquisite seafood and eager for photo opportunities with ancient architecture have brought money into Porto. But these tourists, who need places to rest after long days of sightseeing, have caused rents to rise. Baul says that homeowners can charge higher rates for short-term rentals than for long-term leases, so they frequently choose to rent to visitors over locals.

Many Porto natives can no longer afford to live in their own city.

The minimum wage in Porto is 700 euros, around $790, per month. Baul says that the least expensive one-bedroom apartments in the city cost 400 euros; estimates from online cost-of-living calculators are even higher.

José Maia is an Uber driver and the owner of Port Outside, a company that leads tours in the countryside around the city. He’s a broad-shouldered man with a tightly-trimmed, dark brown beard and short, neatly-styled hair.

Like Baul, Maia makes his money from tourism. Many of his Uber passengers are travelers, and he takes tourists to vineyards and farms around Porto through his tour guide company.

But the money he makes from travelers wouldn’t be enough to pay for housing inside the tourist-filled confines of the city.

He says that the money he used to buy a piece of property and build a large house 30 minutes from the city center would only get him a one-bedroom apartment inside Porto.

“It’s too expensive for locals to live in the city now,” Maia says. “They need to live far away.”

He has to commute over 30 minutes to the city center, where he picks up most of his Uber passengers. Baul also lives around half an hour from her market booth.

Maia worries that if millions of people keep visiting his city every year, Porto’s character will be changed forever and most locals will be driven out. He says that he’s seen other cities that have been destroyed by their own tourism booms.

“I studied in Barcelona 20 years ago, and it was a fantastic place with wonderful people,” Maia says. “Now you don’t find people like that there.”

He says that one reason he takes tourists on tours in the countryside is to reduce the crowds in the city that he worries will ruin Porto.

Maia and Baul both agree that tourism benefits their city significantly. They say that because of the tourism boom, historic buildings are better maintained and public transport has improved.

“Before the tourists came, the city was dirty,” Maia says. “Now it’s clean.”

But they also agree that tourism is gentrifying Porto. They say locals’ apartments are often run-down compared to vacation rentals for tourists.

“We need to think about places to live for Porto locals,” Baul says. “We can’t just focus on tourism.”

Across the river from her jewelry booth and the graffitied Pizza Hut advertisement, a four-star hotel is sandwiched between two run-down apartment buildings. The pristine glass doors of the hotel lobby sparkle at sunset. Inside, tourists from around the world can relax on plush black leather armchairs.

T-shirts, bras and underwear hang on clotheslines strung from the dirty concrete railings of the balconies of each apartment. Dull, beige paint peels off the wall of the apartment building facing the street, revealing the white undercoat below.

At a restaurant a couple of blocks away, people drank local vinho verde wine, ate whole-roasted sea bass and chatted in Portuguese. A group of college students and a professor wearing a straw panama hat sat at a large table in the middle of the restaurant, swilling gin and tonics and yelling in American English.

Jade is a writer originally from Miura, Japan. He writes people-focused stories on topics ranging from food and music to homelessness and prison reform. In his free time, he rides his motorcycle, eats nigiri and dances to reggaetón.