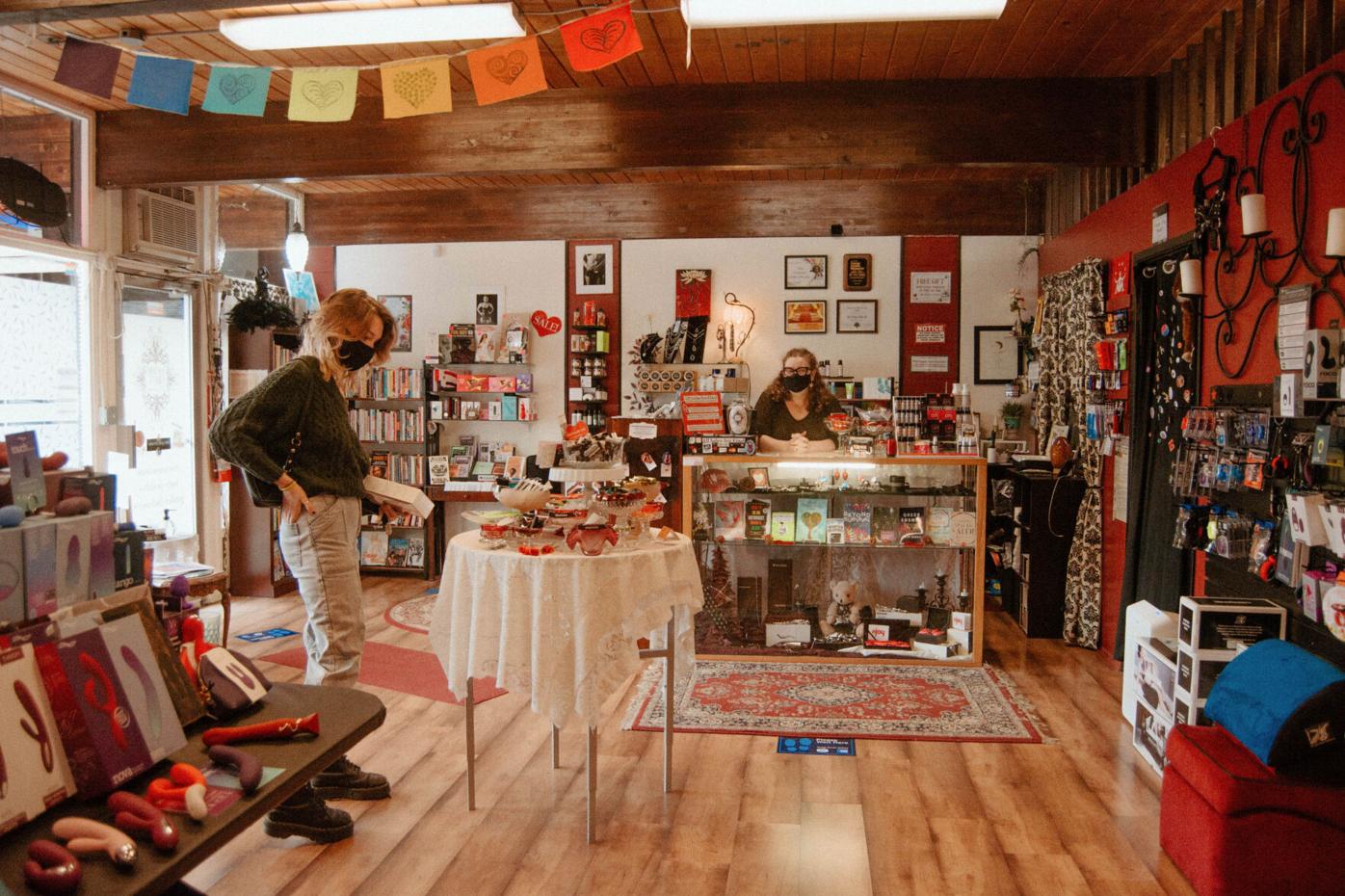 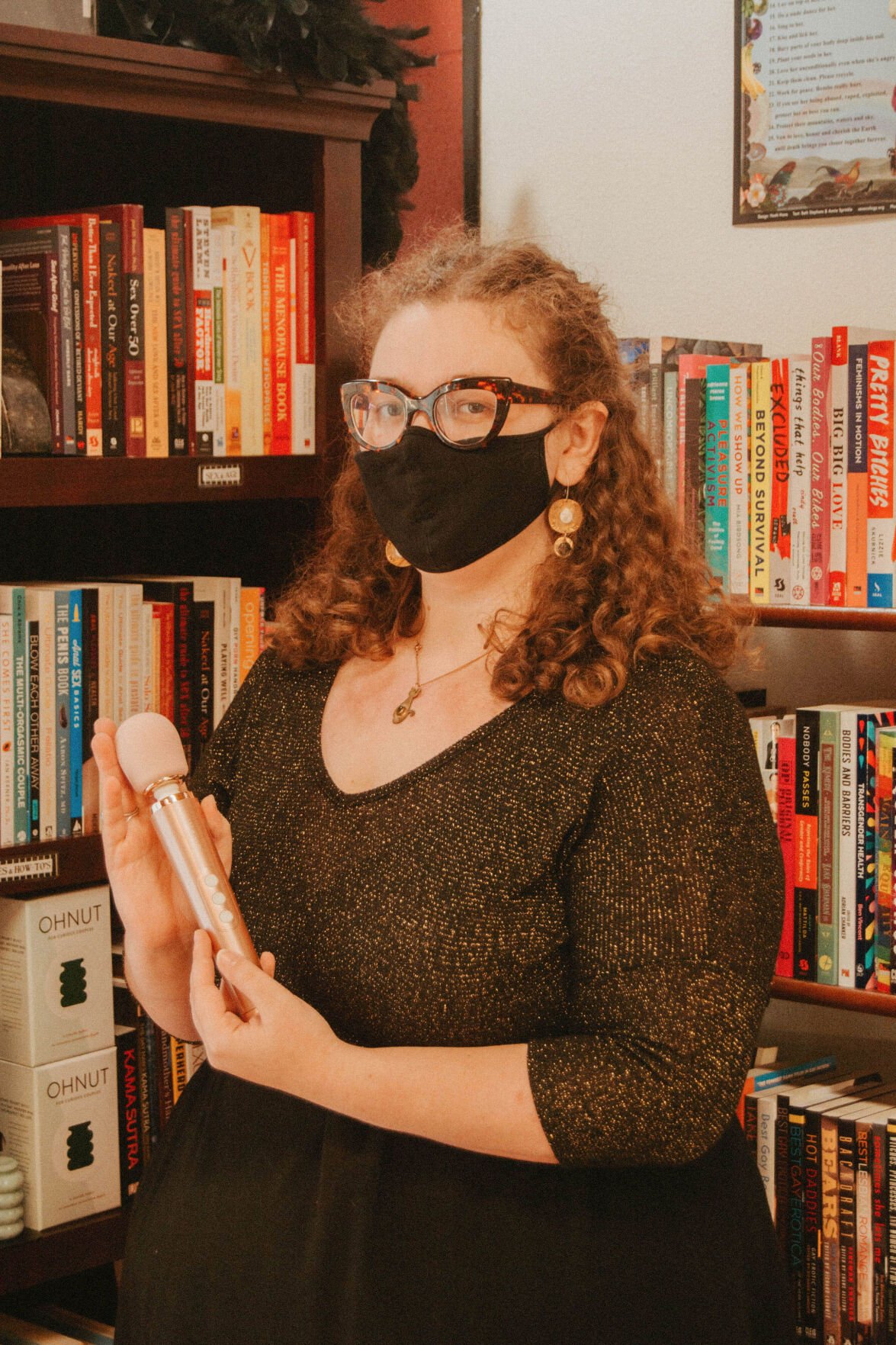 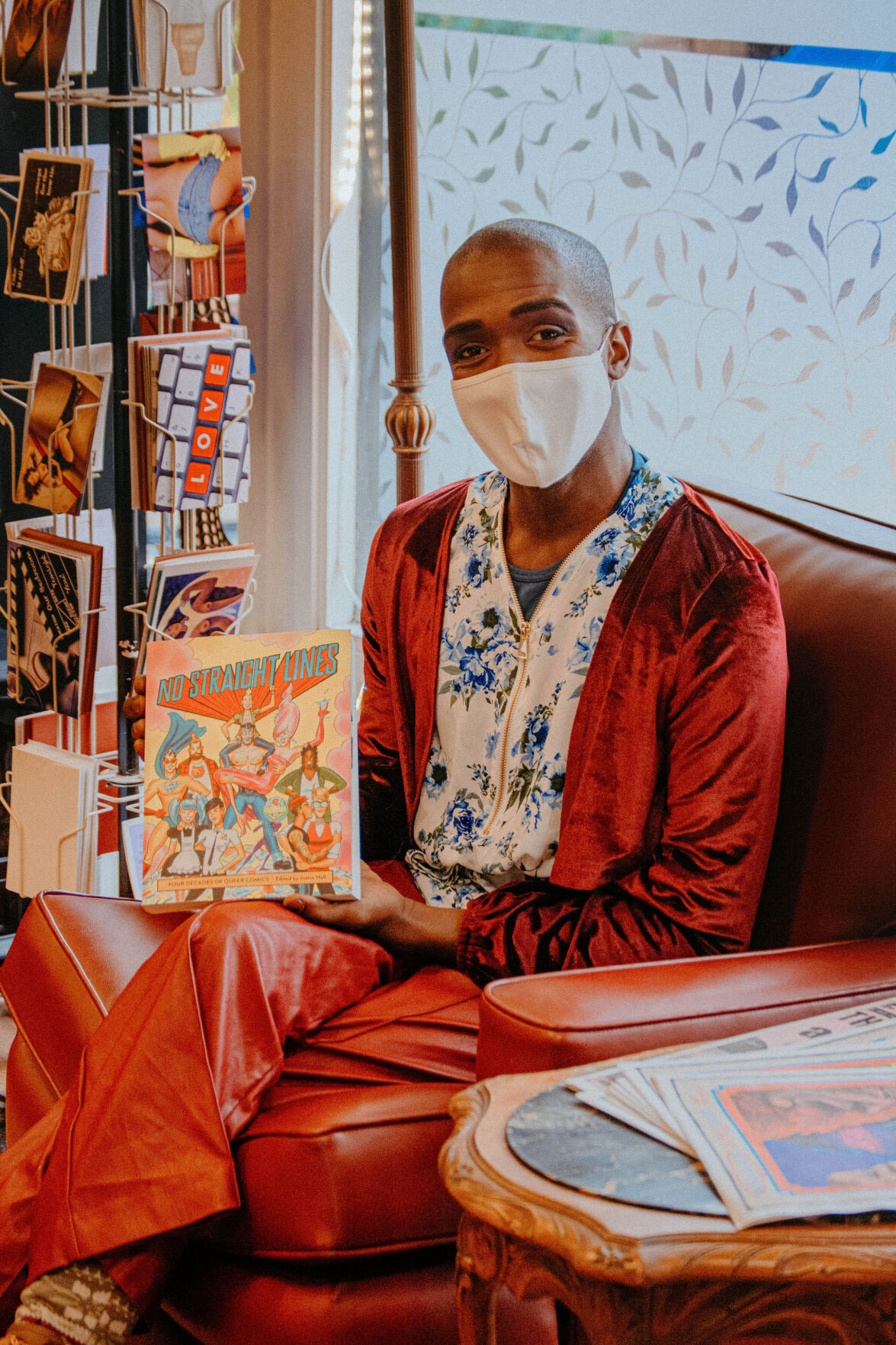 Del Thorton, an employee at As You Like It, picked 'No Straight Lines' as their favorite book in the store because it’s a collection of every comic and cartoon that has been published starring LGBTQ people. “I enjoy this book the most because it shows tons of different art forms and styles,” Thorton says. “There is color, black and white and all of the personalities are so different." 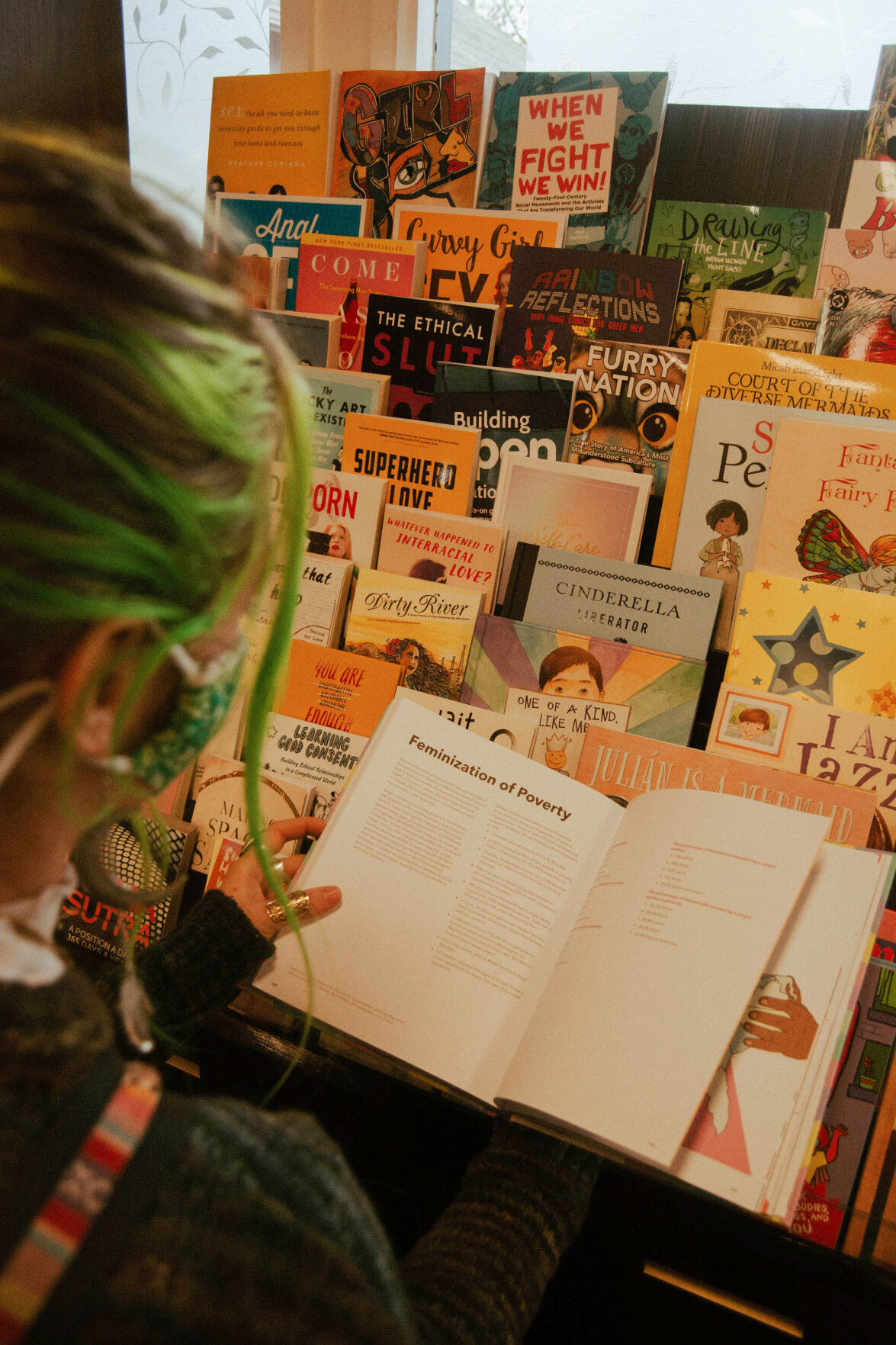 As You Like It has a variety of products from environmentally conscious and body safe toys, to books on sexual health and accessories for gender expression. “I think education is incredibly important about sexual health for all different ages, so I was excited when I found out how many resources we had here,” says employee Jackie Velez. 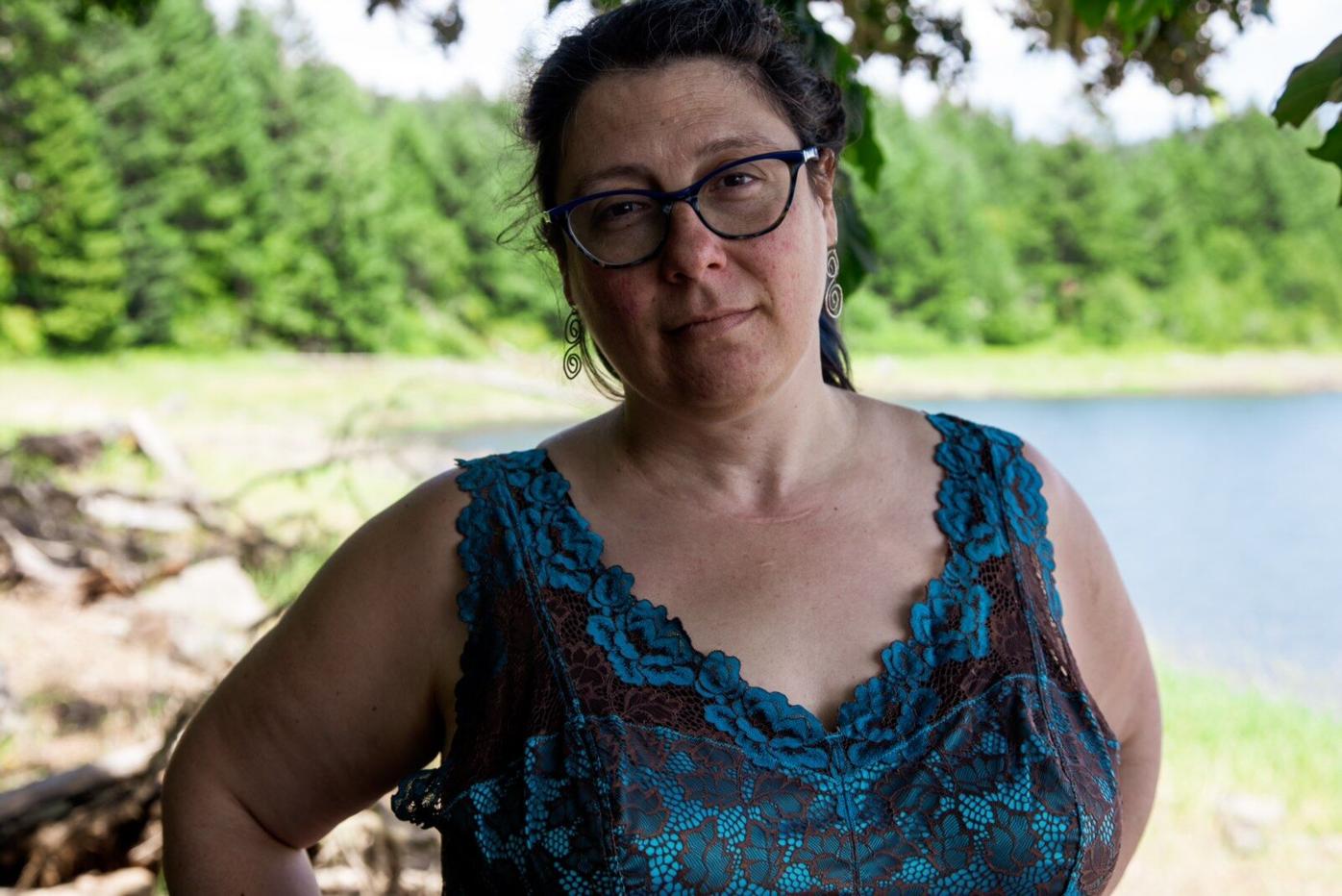 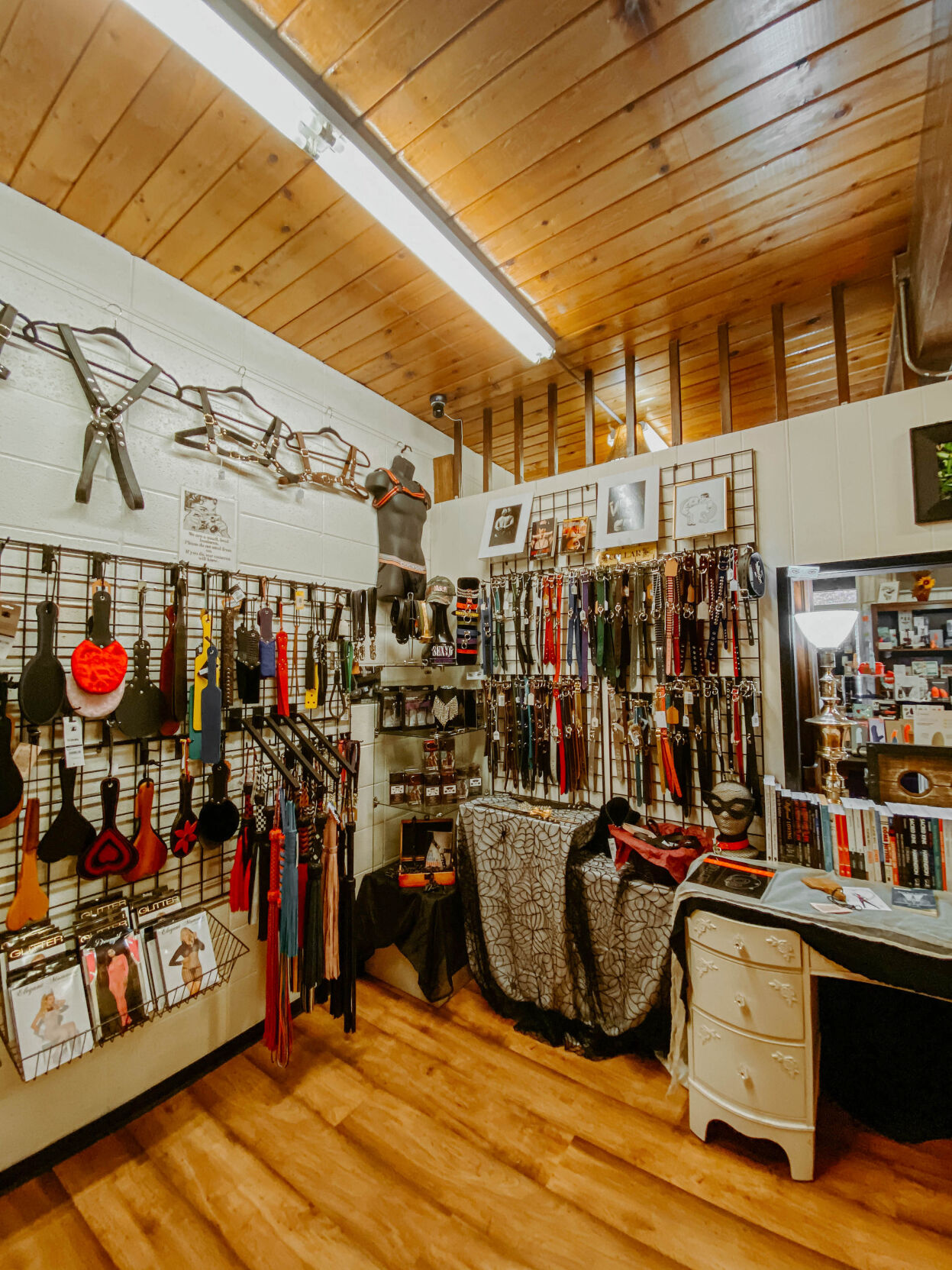 As You Like It has a variety of products from environmentally conscious and body safe toys, to books on sexual health and accessories for gender expression. “I think education is incredibly important about sexual health for all different ages, so I was excited when I found out how many resources we had here,” says employee Jackie Velez.

One afternoon, a mother and her tearful 18-year-old daughter walked into the adult shop As You Like It. Burgundy walls, richly decorated carpets and mahogany furnishings greeted their eyes, and a banner of multi-colored hearts hung above their heads. Kim Marks, the owner and founder of the shop, quickly approached the pair. Marks could see something was wrong and offered her assistance.

While Marks was surprised by such an oversight in a public school, she knew exactly how to help. She told the daughter that lesbians could, in fact, contract STIs and sent the pair on their way with two books: “Girl Sex 101” and “S.E.X.: The All-You-Need-To-Know Sexuality Guide to Get You Through Your Teens and Twenties.” Debunking myths about sex is just one of many skills in Marks’ arsenal, and she is well-equipped to help folks who feel unsafe seeking assistance in other spaces.

After five years as a staple of the Eugene community, Marks’ adult shop As You Like It is bettering the sexual wellness industry by prioritizing education and cultivating a safe space for important conversations about sex.

Growing up, Marks says she was the person who bought her friends their first vibrators, and was a confidant for her loved ones when they needed relationship advice. It never felt strange for her to have those conversations. She says she loves talking about sex and sexuality and recognizes the importance of cultivating safe environments to discuss a subject that is so often considered taboo.

Stores like As You Like It can be important resources in a world where comprehensive sex education is not always inclusive or mandatory. As of December 2020, only 30 states in the U.S. mandated any kind of sex education curriculum. Where it is taught, 37 states require teaching abstinence, and 26 of those states require that abstinence be emphasized over safer sex practices. Additionally, only 19 percent of U.S. secondary schools provide curricula that is LGBTQ-inclusive. According to the Guttmacher Institute, only 6 percent of LGBTQ students reported positive representations of LGBTQ topics in their classes.

Ilana Slavit, a sex educator who identifies as non-binary and uses they and she pronouns, adds that sex education often excludes people who don’t identify with traditional gender roles.

“When sex education isn’t just abstinence-based, and it is more supposedly inclusive, it still talks about sex in a very gendered way,” Slavit says. “So that can be really jarring for folks. It can even cause some trauma for people who have recently transitioned, or recently come out or are even closeted. Because it might cause them to question their own identities and think ‘oh, maybe there’s something wrong with me.’”

Slavit discovered As You Like It while attending the University of Oregon and recalls the shop making them feel more comfortable with exploring their sexuality. They view the shop as a valuable resource for educating people, especially young people, whose high school sex education programs may have left something to be desired. Sex toys are enticing, Slavit says, and can serve as tools that center positivity, pleasure and consent in people’s sex lives. And by layering in educational resources like books and workshops, they say the shop is making knowledge about sex accessible and prioritizing safety and wellness in their mission.

While Marks has always taken an interest in sexual health, she hasn’t always worked in the industry. Prior to founding As You Like It, she spent almost two decades in the nonprofit sector working for environmental and social justice movements. When Marks moved to Portland, Oregon, in her late twenties, she says she often frequented the Portland sex shop It's My Pleasure. On several occasions, her gay or trans-masculine friends asked her to take them to It's My Pleasure so they didn’t seem “creepy.” Even in a feminist shop, they did not feelcompletely at home.

This struck a chord with Marks, and she decided it was time to find new ways to create change. She says she dedicated herself to creating a space where everyone could go to have their sexual needs met, and no one would feel out-of-place or unwelcome. That’s how the shop was born.

The name “As You Like It” combines Marks’ mission for the shop with the title of the well-known Shakespearean comedy. “I can be a little literal,” Marks says and laughs. “Sex should be as you like it, but I’m also a huge Shakespeare buff.”

When it comes to educating the public, Marks always tries to get books into the hands of adults who can give them to the young people in their life — whether that is in the home, the doctor’s office or the classroom. As You Like It is brimming with books about sex and relationships, and according to Marks, some customers have called it “their favorite bookstore.”

Additionally, the shop hosts around four workshops a month, currently over Zoom, covering sex topics like erectile dysfunction, menopause and how to write erotica. As You Like It employees are extensively trained, both online and in-store, and are all certified sexual health resources, qualifying them to offer advice and assistance to their customers.

Jackie Velez, the outreach coordinator for As You Like It, was part of sex-positive groups in college. As You Like It is her first sex shop retail experience, and she says she loves it. Velez says she grew up in a conservative town in Michigan where differences were often frowned upon. As You Like It is important, she says, because it creates a space for people to have their differences celebrated rather than ignored.

“Whenever people get excited about something they get in the store, that makes me really happy,” Velez says. “It makes me feel like I’m doing something good for this community that I love.”

Looking toward the future, Marks says she hopes to move into a larger location. She wants her customers to be able to sit down, potentially around a coffee table with hot beverages available, and pore over books before they decide to purchase them. Cultivating a sense of community is important to Marks, and she feels she can do that better in a bigger space. But for now, she is content to work with what she’s got and make her store a refuge for, as she says, “everybody and every body.”

“We need to create spaces where we don’t stay in our little bubbles and avoid people because they’re slightly different from us,” Marks says. “We need to acknowledge that we are a complex species, and it needs to be okay to be in the same spaces. And we need to know that the people holding those spaces are going to make it a safer experience.”