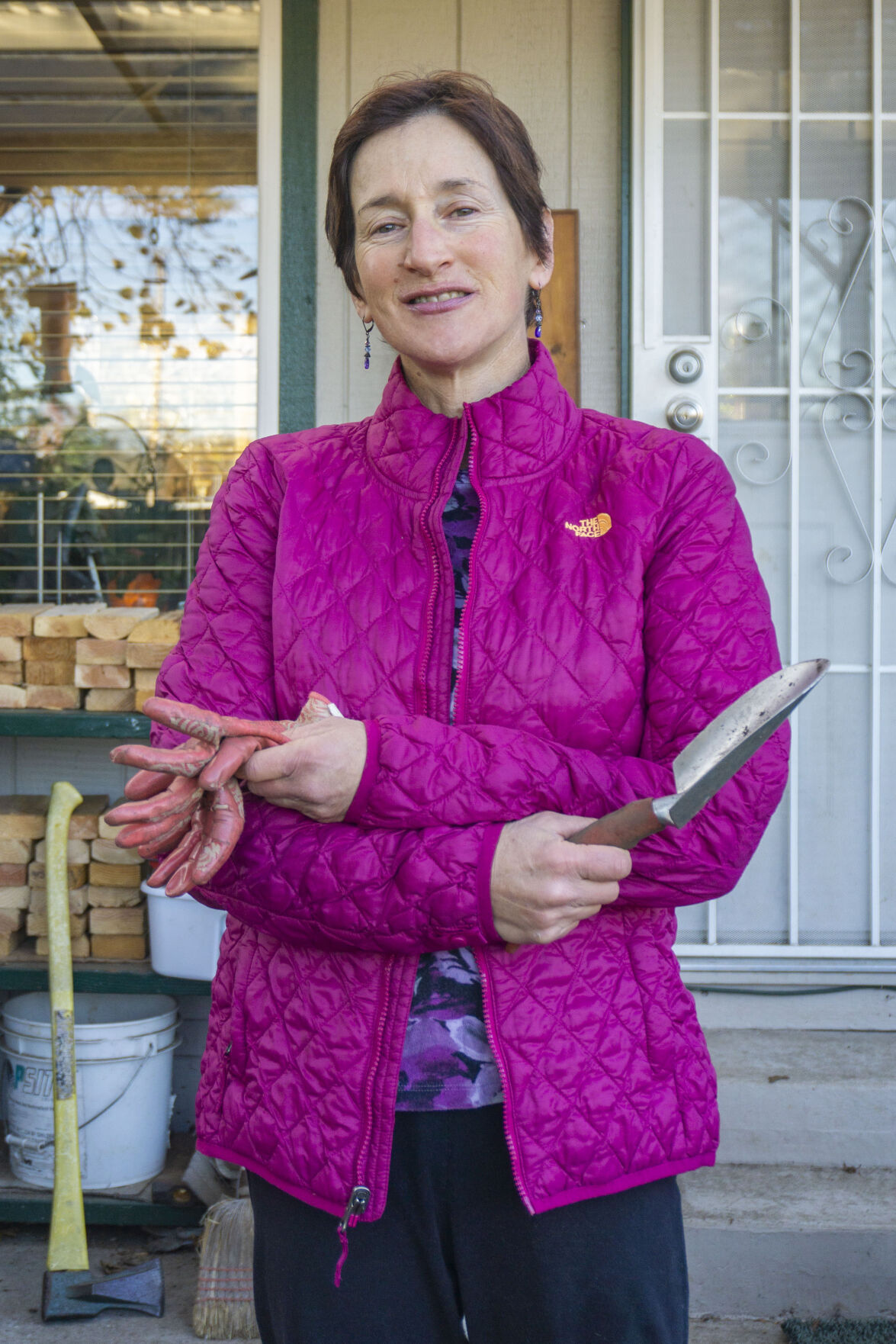 When Ivy Cotler’s not cooking in her kitchen or hiking and skiing with friends, most of her free time is spent in her gardens. Since moving to Oregon, she says she’s learned a lot more about gardening from local enthusiasts. “Gardeners are pretty friendly,” Cotler says. “There’s a big gardening community here.” 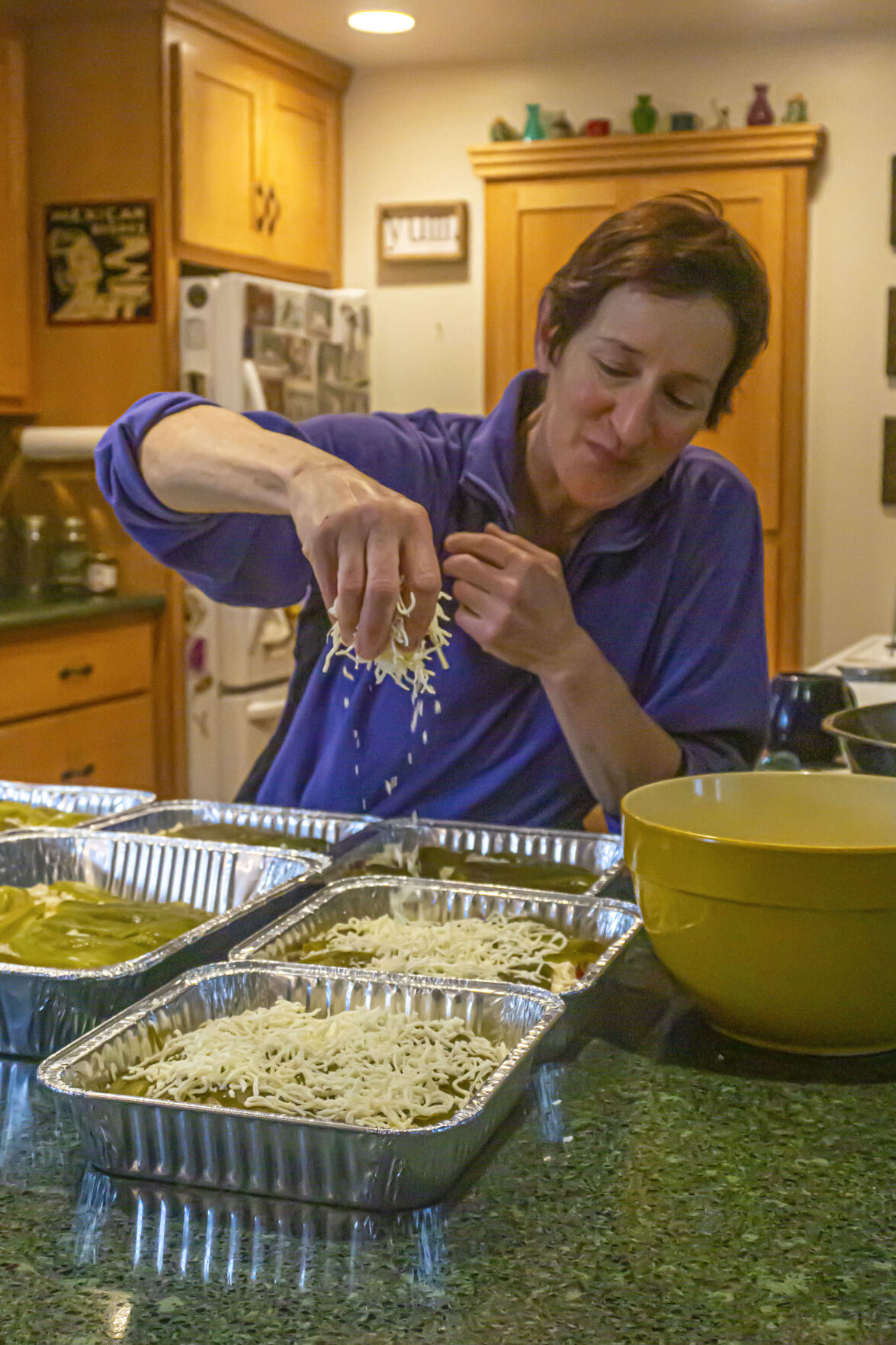 Every Wednesday morning at 7:30 a.m., Cotler wakes up and starts her process of constructing her customers’ orders. With most of her week consisting of prepping, constructing and delivering meals, Cotler is almost always on the move. “I stay busy, but I’m not stressed out,” Cotler says. 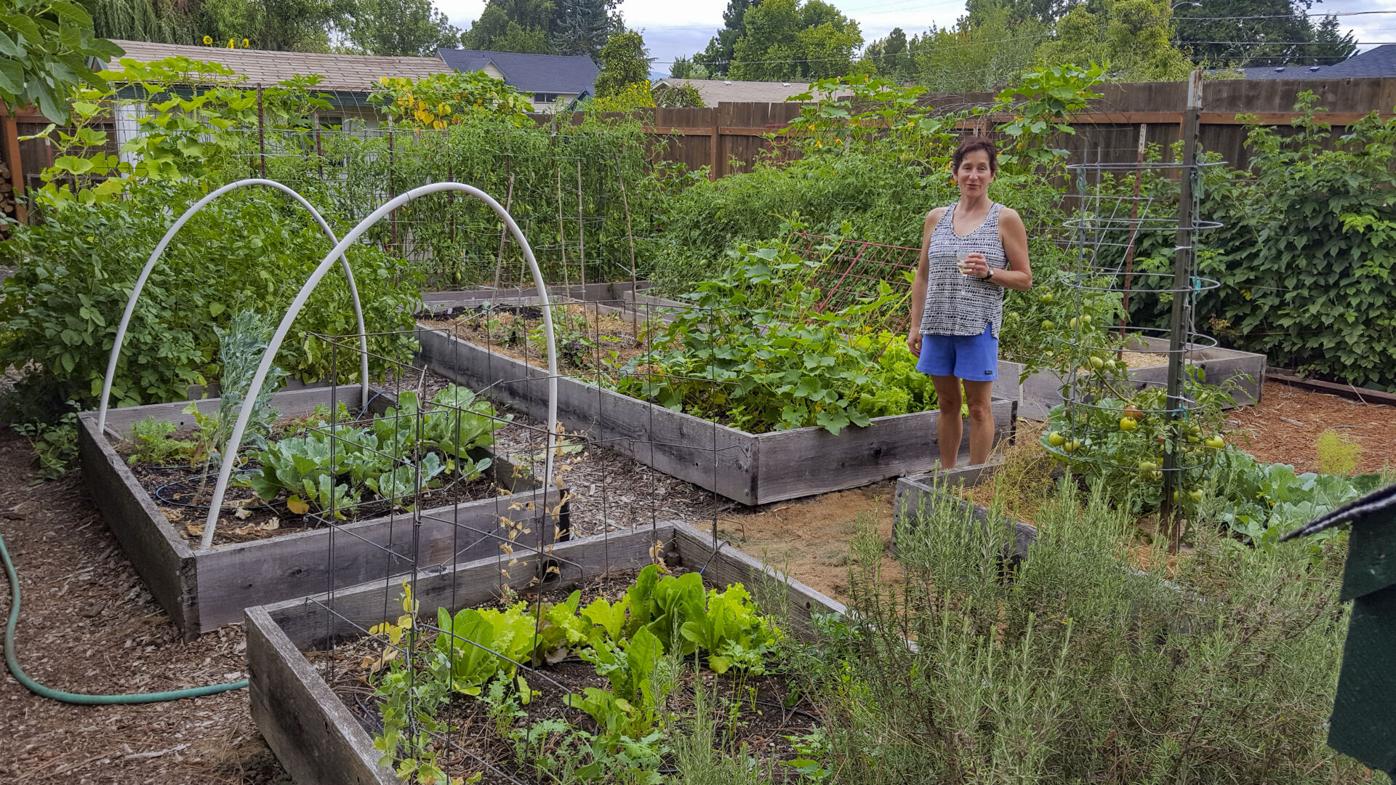 Cotler often incorporates fresh, homegrown herbs and veggies that she grows in her own backyard into her weekly meals for customers. 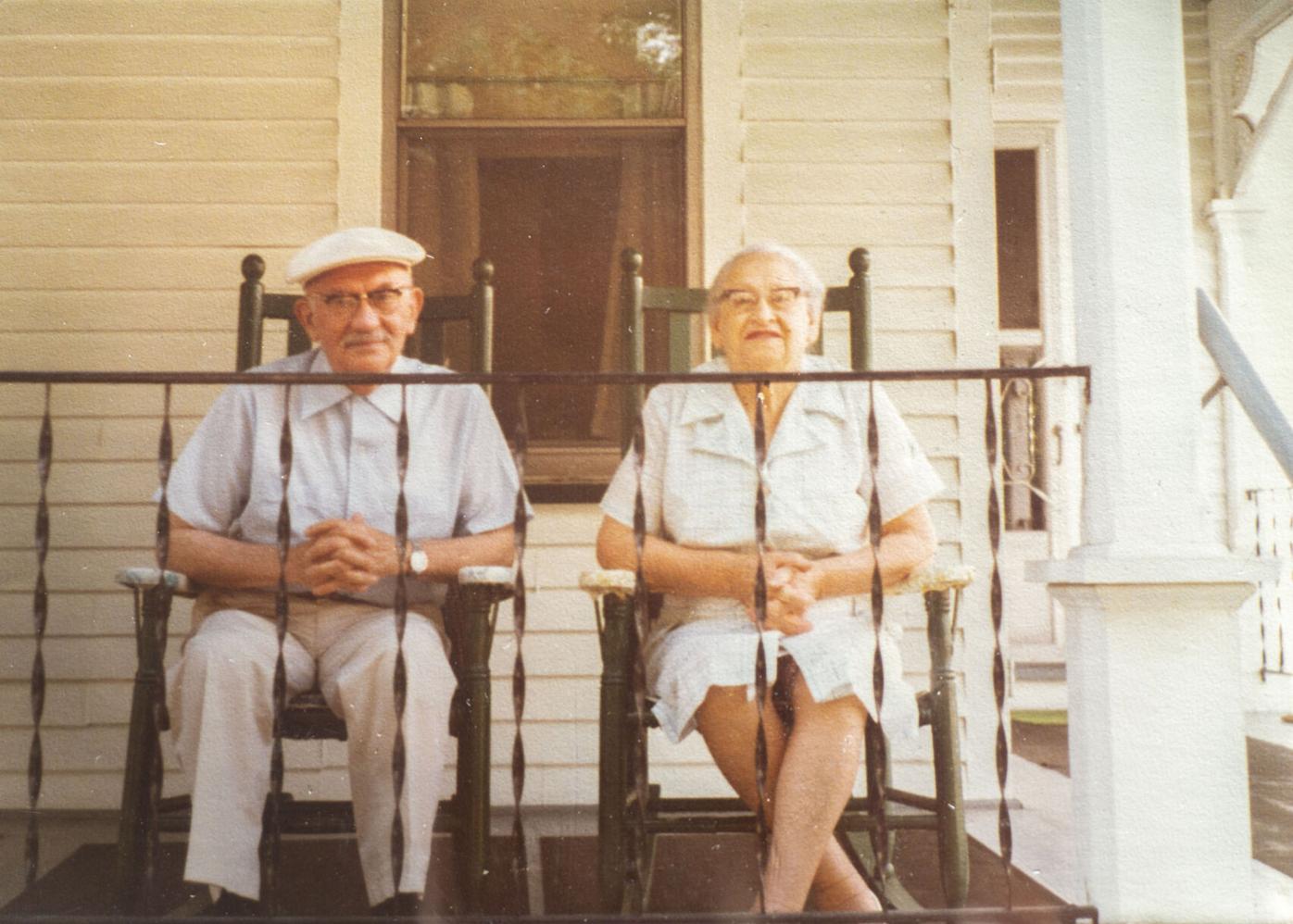 Cotler says her love of cooking comes from her fond memories of cooking at her Grandpa Ben (left) and Grandma Rose’s (right) house in South Jersey. “She was a little five-foot 100 pounds of pure gold,” Cotler says. 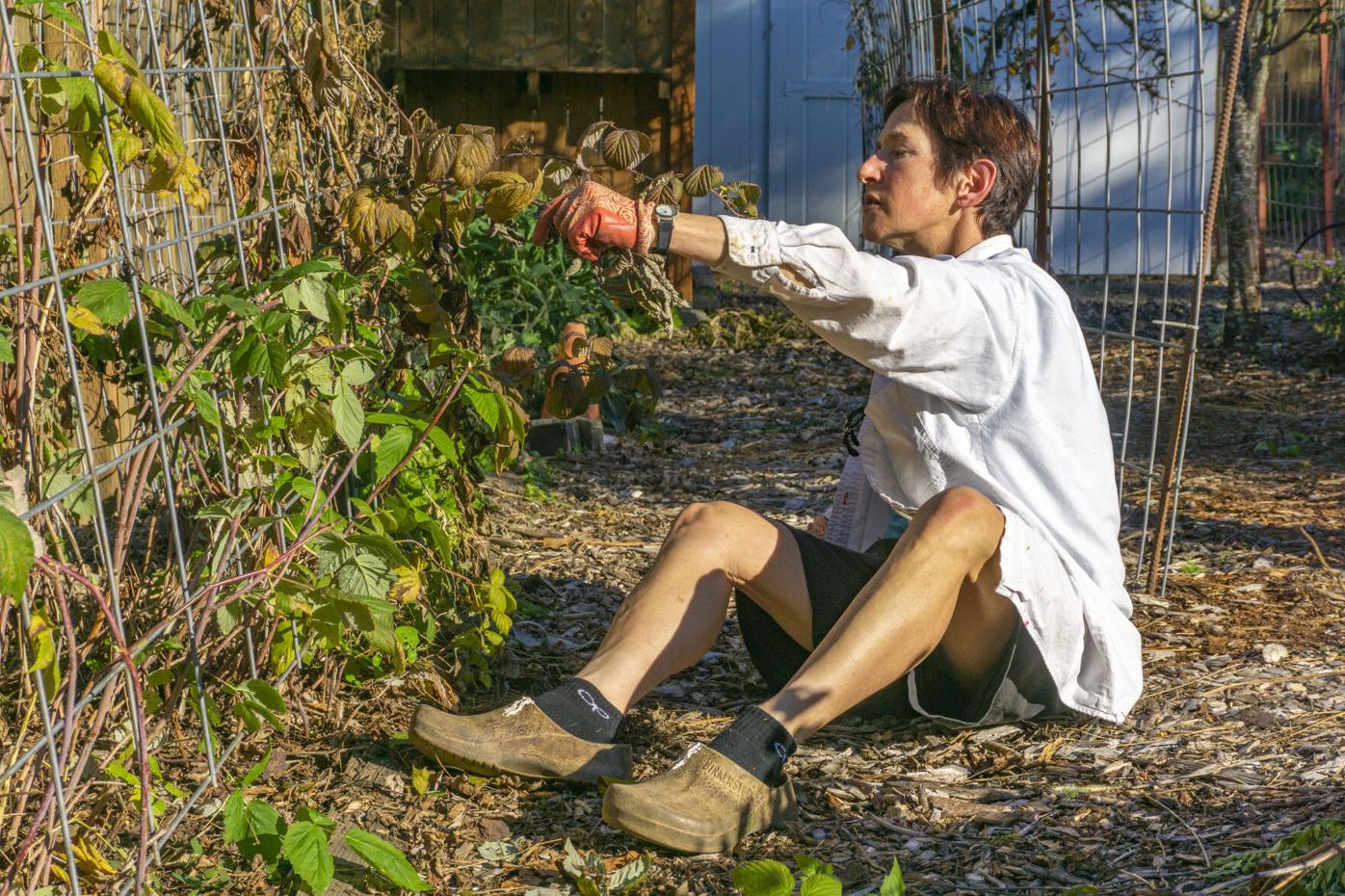 Cotler trims her red raspberry plant in preparation for next year’s crop. ”There’s something almost meditative about doing this if you're not in a rush,” Cotler says. “That’s one thing I love about gardening, and that’s why it’s nice to have a nice afternoon like this to do this.”

Cotler often incorporates fresh, homegrown herbs and veggies that she grows in her own backyard into her weekly meals for customers.

Cotler trims her red raspberry plant in preparation for next year’s crop. ”There’s something almost meditative about doing this if you're not in a rush,” Cotler says. “That’s one thing I love about gardening, and that’s why it’s nice to have a nice afternoon like this to do this.”

Surrounded by trees, flowers, fruits and veggies that she planted herself, Ivy Cotler is in her element. From canna lily flowers and rosemary to fig trees and rose bushes, Cotler’s front and back yard spills over with lush vegetation year-round.

Unlike the small family garden that Cotler and her sister, Tina Wagner, used to help their father maintain as children, this one has been slowly growing around Cotler’s home for the last 25 years.

“It’s hard to remember everything that’s going on in this yard,” Cotler says. “It’s a cornucopia.”

As the sole owner and chef of Ivy’s Cookin’, a weekly home-cooked vegetarian meal delivery service in Eugene, Oregon, every day comes with another task or goal for Cotler to achieve.

And, while Coronavirus restrictions have negatively affected small businesses throughout Oregon, the popularity and demand for Cotler’s cooking has skyrocketed.From Monday to Thursday of every week, Cotler is taking orders, shopping, prepping, cooking and delivering meals to her customers.

Ivy’s Cookin’ saw around a 30 percent increase in orders over this past summer; the ability to have home-cooked food delivered directly to homes from a single source appealed to home-bound Eugene and Springfield locals.

The trust that Cotler instilled in her customers has overshadowed fears of contracting COVID-19 through her business for her customers.

Eric Johnson, a regular customer of Ivy’s Cookin’ since moving to Eugene in 2017, has felt safe ordering from Cotler during the pandemic. Despite his wife, Emily, having a compromised immune system, neither of them wanted to discontinue their weekly meals from Cotler.

The curbside pick-up format that Ivy’s Cookin’ uses alleviated Johnson’s concerns of getting the coronavirus from Cotler.

“She pulls up, she rings the doorbell, she drops the food off, and she's on her way. So we didn't have any concerns whatsoever,” Johnson says.

Although Ivy’s Cookin’ is now Cotler’s financial foundation, becoming the owner of a small cooking business was not what she originally planned to do.

Growing up on the East Coast, Cotler lived with her mother, Dolores Cotler, her father, Lee Cotler, and her big sister, Tina Wagner, just outside of Philadelphia, Pennsylvania.

After graduating from Neshaminy High School in 1980, Cotler enrolled at Stockton University, where she studied environmental science with an emphasis on earth sciences.

In 1985, with a degree under her belt, Cotler’s interests and knowledge of earth sciences led her to a six-month internship with the U.S. Forest Service and the Bureau of Land Management based in Eugene, Oregon.

“I was happy to move across the country, and I wasn’t sure if I’d go back,” Cotler says. “I loved it here.”

As a hydrologist for the U.S. Forest Service and a soil analyst for the Bureau of Land Management, Cotler spent most of her internship hiking up and down streams in the mountains collecting samples of water and soil to analyze.

After her six months had come and gone in Eugene, Cotler decided she was here to stay and was soon offered a permanent position working as a hydrologist for the U.S. Forest Service. Her work there continued until around 1990, when she resigned from her position due to stress from her work’s environment.

“I went back to the drawing board and thought about ‘what do I like to do,’ ‘what can I do well’ and ‘what can keep me in Eugene,’ because by then, I’d fallen in love with this area,” Cotler says.

As questions swirled around her future, Cotler began to reminisce on time she spent with her grandmother. Known for her amazing cooking skills and lovable character, Cotler’s Grandma Rose had an immense influence on Cotler’s life.

“She was a little five-foot 100 pounds of pure gold,” Cotler says.

Grandma Rose and her husband lived in a small, historic house in southern New Jersey with a porch that always sported two old-fashioned rockers that the couple enjoyed lounging in, Cotler says. While away at college, Cotler routinely visited her grandmother at her home since she lived within an hour from her university.

“Your parents can’t always give you everything you need,” Cotler says. “If you’re lucky you have someone else in your life who can, and that was my Grandma Rose. She was my rock.”

For most of her visits, the main event of the day would be watching her grandmother cook dinners and desserts. Although she sometimes helped chop ingredients, Cotler usually used these visits as a chance to relax and talk to her grandmother as she cooked. Many of her fondest memories during her college years were of these visits.

Among the many delicious foods that her Grandma Rose made for her and her family, Cotler’s favorite meal was her pot pies, which were made up of veggies and chicken and encased in a golden, flaky crust.

“Whenever I was asked ‘what did I want,’ it was always those homemade pot pies,” Cotler says.

With these happy memories of Grandma Rose in mind, Cotler realized she had a strong interest in cooking. This recognition led Cotler to make the jump into the food industry.

“We’re a cooking family,” says Wagner, who wasn’t surprised when her sister turned to food as a career path. “I find that there are people who eat to live. That’s not us. We live to eat.”

But while cooking as a personal chef helped her take her first steps into the culinary world, Cotler soon realized that she didn’t find it efficient to live by the schedules and kitchens of others. Instead, she wanted to work on her own terms and in her own home. So Cotler began planning what would become Ivy’s Cookin’.

But with most of her education focused on environmental sciences, she had a lot to learn about business.

“My family are good cooks on my dad’s side, really good cooks,” Cotler says. “But business? No, Dad was never a great businessman.”

Cotler decided to enroll in Lane Community College’s Small Business Program. Along with this three-year program, Cotler also got involved with Eugene’s Women’s Business Network and received advice and help from people she met along the way.

With the knowledge and advice from her friends and colleagues in one hand and a chef’s knife in the other, Cotler started her business as a part-time job in 1992. Cotler cooked out of her rental home in the Bethel neighborhood until she bought her own house in 1995.

Unlike her previous backyard, which housed a large black walnut tree that shaded out the plants under it, her new home allowed Cotler to fulfill her desires to have a large vegetable garden. Alongside the couple of fruit trees that came with the house, Cotler got to work by planting an array of fruit and veggies throughout her yard.

This garden soon became a staple in Cotler’s cooking business. With a vegetarian menu, the vegetables that Cotler grew went straight into her weekly meals. She also started preserving her garden’s fruits and sold them as a part of her “culinary boutique.” When the fruits and veggies from her gardens run out, Cotler supplements her meals with supplies from grocery stores.

After being in business for 25 years, Cotler has managed to accumulate a handful of regulars who can’t get enough of her homemade vegetarian cooking.

For Julia Linebarger-Taylor, a retired legal assistant and 22-year-resident of Eugene, Ivy’s Cookin’ has been a part of her and her husband’s life for over 15 years. After hearing about Cotler’s cooking from a friend and trying out one of her weekly meals, Linebarger-Taylor was hooked.

“One of the things she does is that she puts interesting spices and interesting flavor combinations in her food that sets it apart and makes it extra nice,” Linebarger-Taylor says. “Her food’s been consistently good, and it’s an easy email order.”

As long as Ivy’s Cookin’ has been up and running, what Cotler calls her “quirky little niche” of vegetarian cooking and freshly made goodies has kept her moving forward.

“I’m incredibly grateful that my business has done really well during the pandemic,” Cotler says. “I’ve had a few people, one I had for many many months who was high risk and was a cancer survivor and her immune system was quite compromised, and she hadn’t left her home for months, so I think it was really helpful for a lot of people.”

Looking out to Cotler’s garden now in the winter months, only a few living things still remain: some kale, a few perennials, some herbs and some squash. But despite the lack of pickable fruits and veggies, the love and care Cotler gives never fades.

“I just want to continue with providing yummy meals to people and enjoy my lovely customers,” Cotler says.

Julia Page is a writer and aspiring photographer from Elk Grove, California. She writes about cultures, communities and travel. In her free time, she enjoys trying out new food recipes, discovering new places in town and drinking green tea.