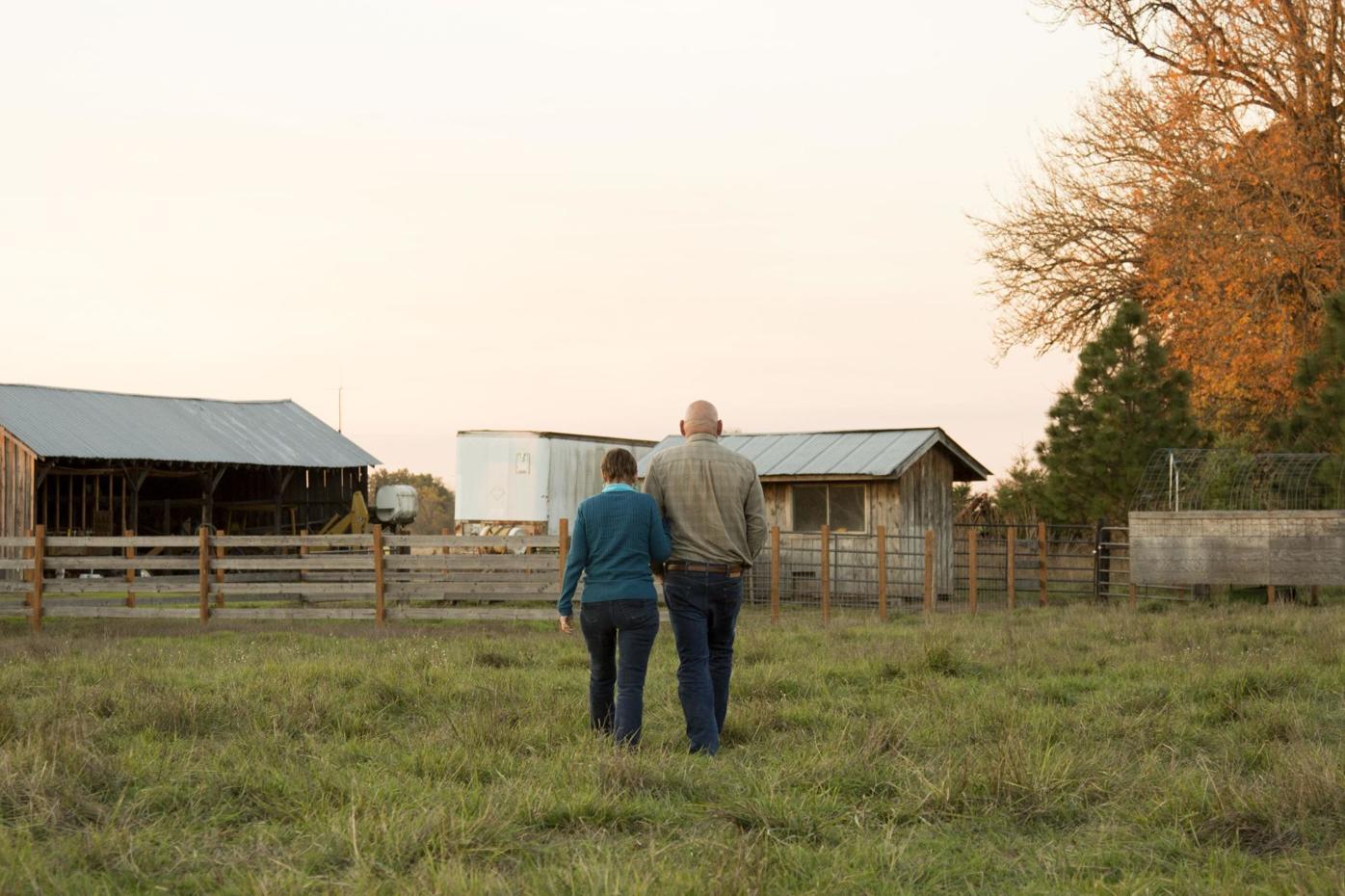 Cherry and Jerry stroll through an area of their property that’s fenced for their alpaca herd. They keep a barn and a shed for storing tools and materials. The two met at Clackamas Community College in 1972 and have been married for 43 years. Photo By Hetta Hansen 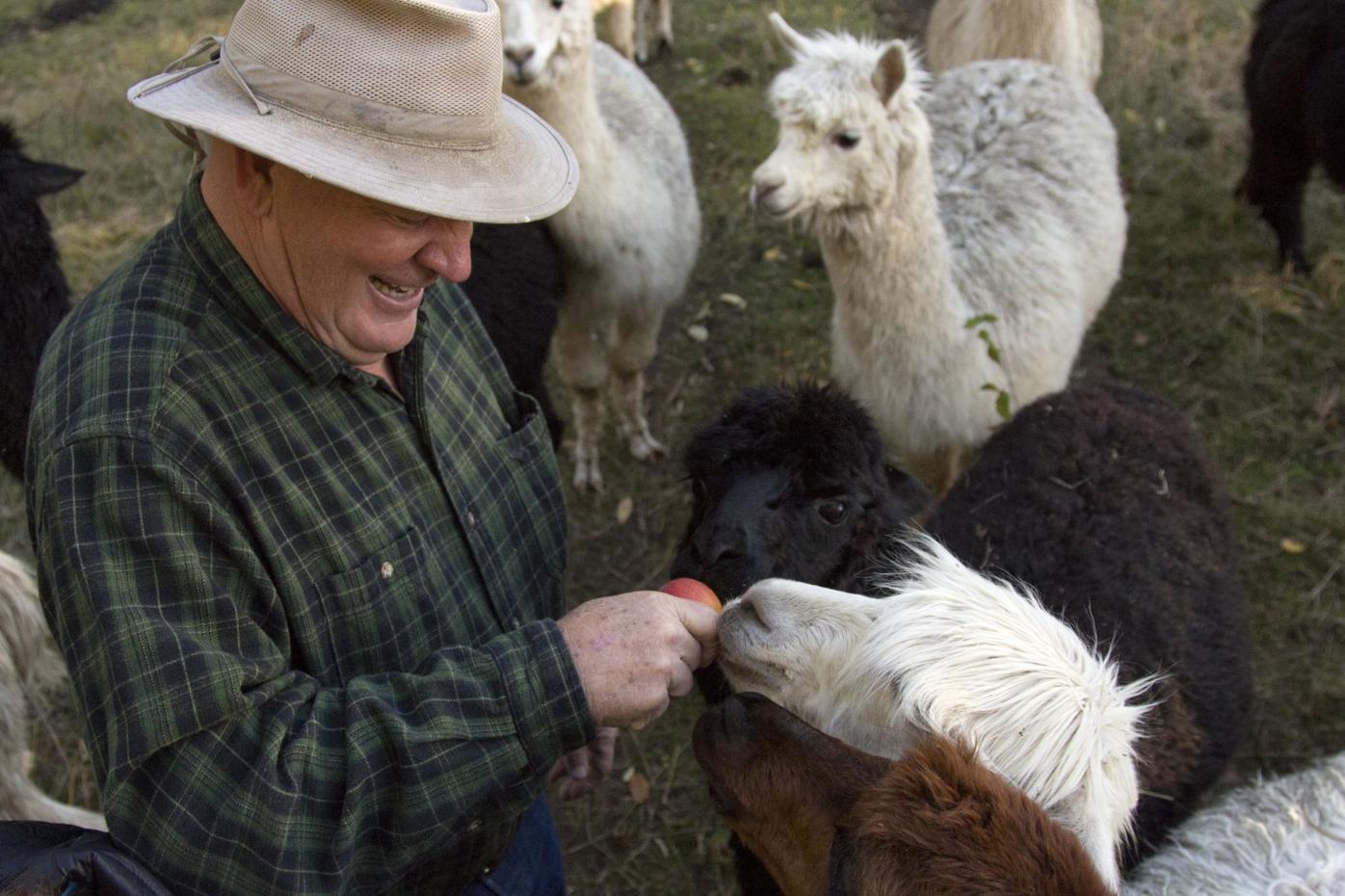 The alpaca, hopeful for another apple feeding, are friendly and approachable. Cherry and Jerry also have three llamas. 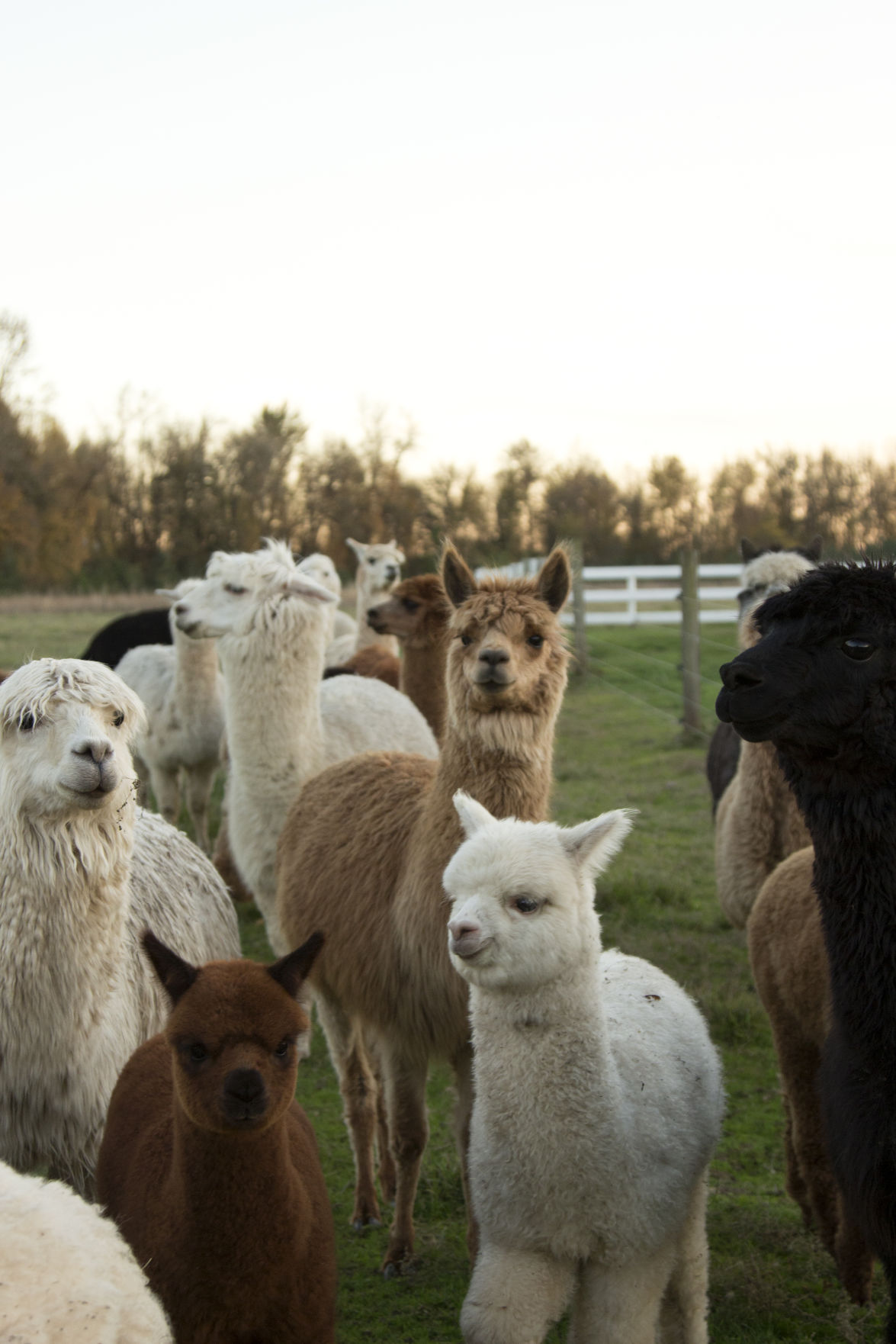 Jerry and Cherry feed their alpaca herd with apples from the tree in front of their house. The alpacas, or “packies” as they call them, are used for grazing to help keep unwanted weeds under control. They are either kept within a large fenced area or allowed to wander the […] 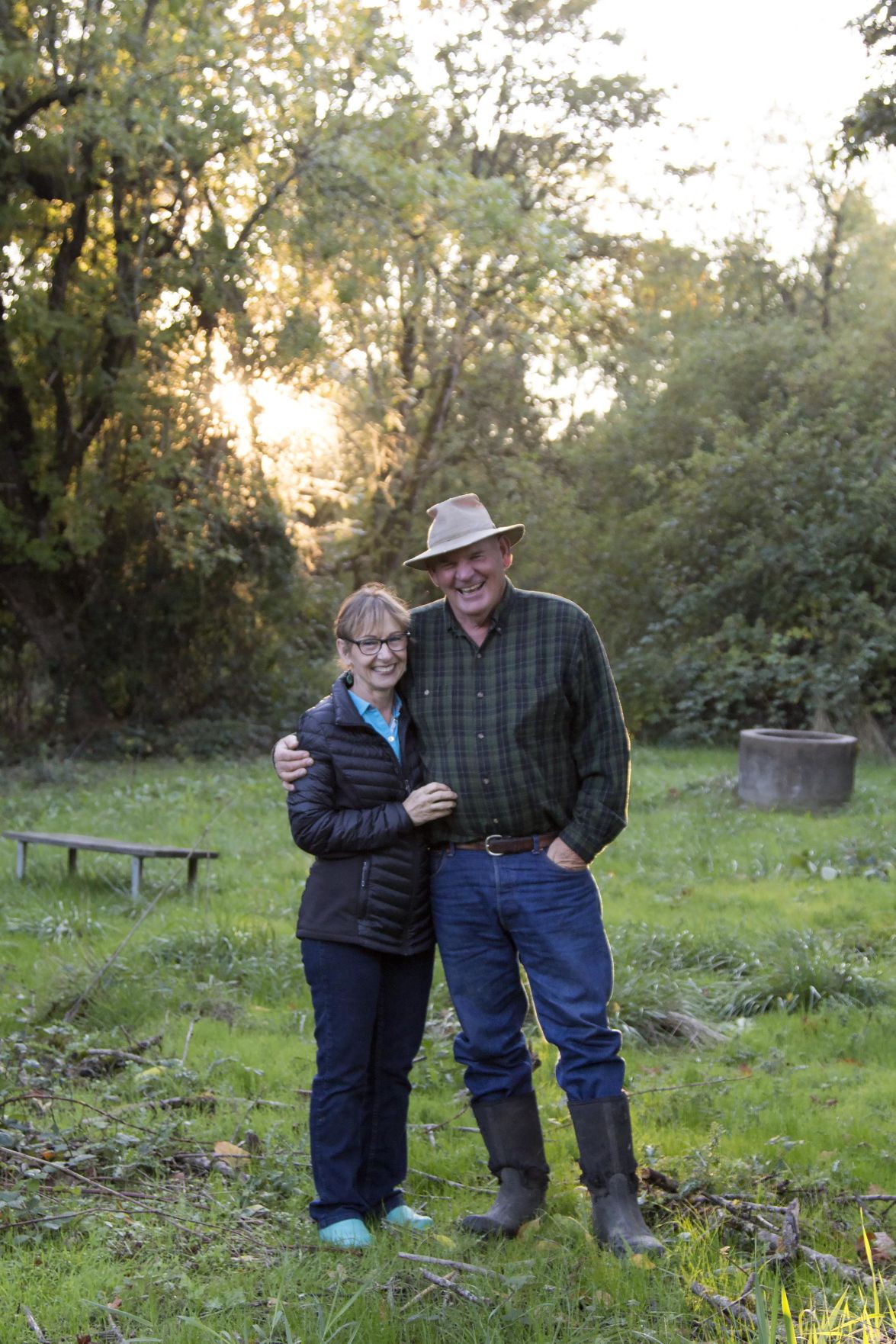 Cherry and Jerry stroll through an area of their property that’s fenced for their alpaca herd. They keep a barn and a shed for storing tools and materials. The two met at Clackamas Community College in 1972 and have been married for 43 years. Photo By Hetta Hansen

The alpaca, hopeful for another apple feeding, are friendly and approachable. Cherry and Jerry also have three llamas.

Jerry and Cherry feed their alpaca herd with apples from the tree in front of their house. The alpacas, or “packies” as they call them, are used for grazing to help keep unwanted weeds under control. They are either kept within a large fenced area or allowed to wander the […]

One couple’s choice to farm for restoration instead of profits

Words and Photos by Hetta Hansen

A quick turn off I-5 and short journey down a winding road sits Jerry and Cherry Skiles’s farm in Shedd, Oregon, sprawling beneath blushing clouds at the end of a sunny day in October. Established at the south end of the Willamette Valley, framed on the west by the freeway with Mary’s Peak mountain silhouetted just beyond, native Oregon wildflowers dry after a long summer.

“We’re just gears in a cog keeping something bigger moving,” Jerry says, grabbing his wife’s hand, reflecting on their work as conservation farmers for the native Oregon wildlife ecosystem they have nourished.

A walk through their forested property is speckled with sunlight and a visit from an alpaca herd that helps maintain unwanted weeds. The sounds of fall crunch in a refreshing way that mark the confluence of the seasons. The atmosphere is intoxicating, but that’s not exactly what makes the farm special. The love that binds Cherry and Jerry to each other and to doing good is palpable, and is reflected in their success in restorative farming.

In 2003, after 40 years of missionary work in West Africa, the Skiles returned home to Oregon. However, their lives of service continued on 172 acres of upland prairie wetland as conservation farmers. The sounds of traffic on I-5 wash over the farm like tidal waves, emphasizing the reason behind their work: since European immigration to the United States, human intervention has been overpowering native wildlife in Oregon.

Jerry and Cherry, who have been farmers and missionaries their whole lives, found a way to help.

In tandem with the United States Department of Agriculture’s National Resource Conservation Services, the Skiles have been coaxing native Oregon plants and animals back to a healthy status. Preserving native wildflowers, pollinators and grassland birds are the focus of the Skiles’s farm.

The NRCS is the USDA’s effort to restore native plants and animals through farmland in partnership with farmers. In 1990, Congress created the Farm Bill to support conservation farming. In the Agricultural Act of 2014, that bill was converted into the Agricultural Conservation Easement Program-Wetland Reserve Easement, which funds many farming, land and conservation interests. Through the ACEP-WRE, farmers like the Skiles are essentially paid not to farm for crops, and instead convert their properties into the natural ecosystems they once were.

About ten years ago, the Skiles were approved for the program (called the Wetlands Reserve Program at the time) and began the restorative process. Cherry, perched on the back of the family tractor, would plant pine trees as Jerry drove along, rotating whenever their hands got too cold from the winter temperatures. Now, rows of pine trees tower over the Calapooia River to shade and protect salmon activity, while a field of buttercups and lupines attract an ecosystem that supports bird, butterfly and bee activity.

“Watching this place grow with the trees and the different things is really kind of neat,” Cherry says, gazing out her living room window that overlooks the field of wildflowers, which bloom in yellow and purple during their season. “Now we see yellow birds out in the fields.”

According to Jarod Jebousek, a biologist in the Partners for Fish and Wildlife Program, forest, grassland and wetland areas have all been reduced and degraded since European settlement in the Pacific Northwest. Native grasslands and savannas, once the most extensive habitats in the Willamette Valley, have been reduced to an approximated one percent of their historic extent. Jebousek worries that what remains is under further threat from invasive species.

“America has perfected productivity,” Jerry says, explaining his goal in farming for restorative purposes instead of profits. “But it’s come at a cost to our environment. Somewhere in there is a balance.”

It is not an easy job to turn a once farmed property into a secure habitat that supports native wildlife and plants, according to Jerry. Teamwork is necessary for success, which is why biologists with the Partners for Fish and Wildlife Program like Jebousek often join forces with the farmers. For Jerry, developing friendships with the specialists has been the best part of his job.

90 percent of the lower elevation of the Willamette Valley is privately owned, much of it by agricultural producers, according to Jebousek. This means that working with farmers is necessary to increase conservation efforts.

According to Dannelle Aleshire, a basin wetland specialist for the USDA, the NRCS is important for restoring a decreasing number of pollinators. Through the established restorative farms, otherwise known as easements, coverage of native grasses such as milkweed encourage Monarch butterfly migration and their pollinating benefits.

But these native flowers, like tarweed and sledge grasses, are important for protecting wetland ecosystems. Without the insects that the fields attract, resident and migratory birds have limited resources and begin to decrease in numbers. According to Aleshire, the Western Meadowlark, which is Oregon’s state bird, is nearly a threatened species.

Now, after ten years of active restoration and nearing the end of the conversion process, the Skiles see a homecoming of Oregon wildlife. The farm is teeming with birds, deer, beavers, frogs and many other native species.

“It doesn’t happen quick, but when you look back a decade, there’s a lot of change,” Jerry says. “When you create the habitat, the animals will find it.”

However, in 2018, the Farm Bill is set to expire and must be readdressed by Congress. Aleshire is hopeful that 25 years of progress will ensure that the program continues, but it is not guaranteed. Nonetheless, the thousands of protected easements throughout the nation, like the Skiles’s, will remain whether they continue to receive funding or not.

“With the demand of so many competing land uses, every bit of protected habitat benefits fish and wildlife,” Aleshire says.

Still, the Skiles work hard to maintain the momentum they’ve built. Every day, Jerry and Cherry embark on a constant battle to fight out invasive plants. Many of these non-native species, like Himalayan Blackberries, are unpredictable and fierce, only eradicated by a complicated mix of selective spraying and mowing. These methods are all approved by the Environmental Protection Agency, according to Jebousek. Jerry keeps a watchful eye as he persuades his crop to return season after season.

When they’re not working, the couple spends time spotting deer, admiring the birds as they dive in and out of the fields and taking a dip in their swimming hole on the Calapooia river on hot summer days. They also host family and friends for barbecues under the trees.

A handful of times a year, the Skiles volunteer for the USAID Farmer to Farmer program, where they travel overseas to teach farming to those in need. Recently, the two arrived home on Thanksgiving from a trip to Mozambique where they helped farmers with irrigation and farm planning.

Despite having seen most of the world as well as the depths and heights of the human condition, Jerry and Cherry admit that they don’t know much, but are committed to giving everything they’ve got.

After all these years, the two still find ways to use their talents to better the world. For Jerry, getting his hands dirty is key. As the fall leaves whistle in the last of the year’s sunny days, Jerry’s contagious laugh challenges the ominous presence of the freeway.

Reclined in their living room, surrounded by trinkets from trips around the world, Jerry and Cherry share a knowing smile.

“You choose a course, and if you stick with it long enough, you can see change,” Jerry says. “It takes time to see how your impact has affected change.”