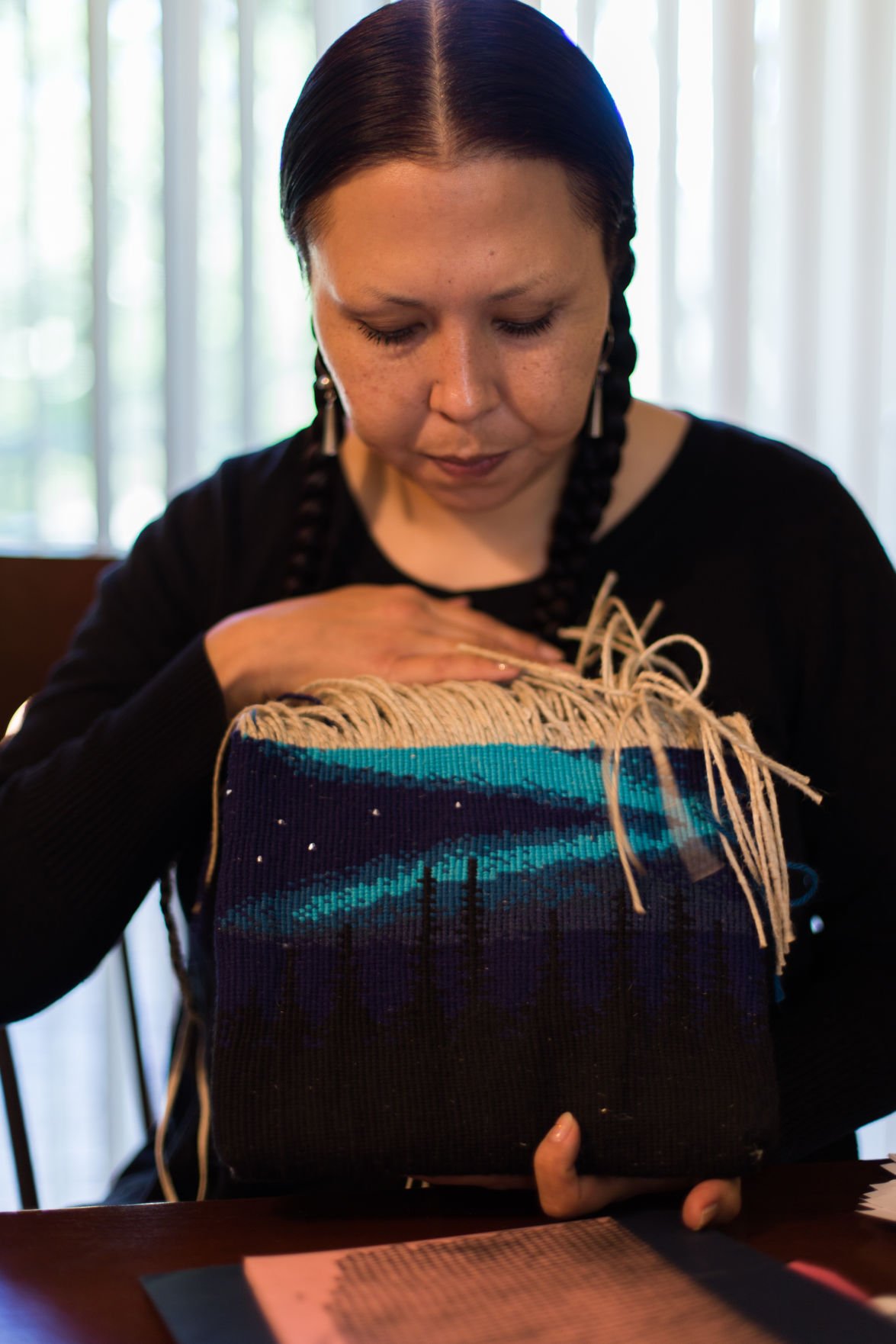 Generations of handmade Native American regalia and decor fill the walls of Crystal Szczepanski’s home on the Confederated Tribes of Grand Ronde reservation. Among them hangs a Pendleton and leather cradleboard crafted by relatives for Szczepanski after the birth of her daughter, Ravin. A carving of a wood canoe is […] 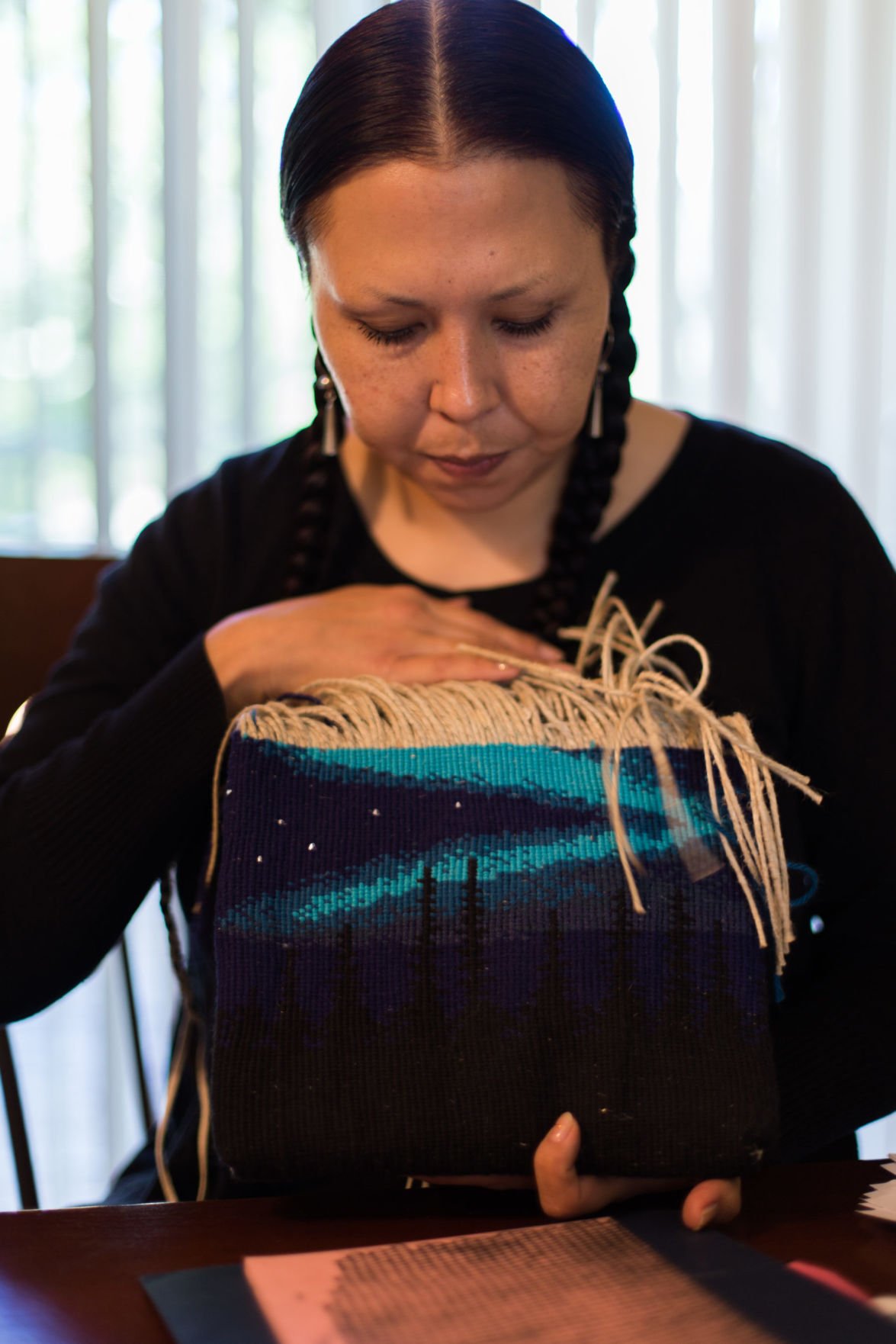 Generations of handmade Native American regalia and decor fill the walls of Crystal Szczepanski’s home on the Confederated Tribes of Grand Ronde reservation. Among them hangs a Pendleton and leather cradleboard crafted by relatives for Szczepanski after the birth of her daughter, Ravin. A carving of a wood canoe is […]

Generations of handmade Native American regalia and decor fill the walls of Crystal Szczepanski’s home on the Confederated Tribes of Grand Ronde reservation. Among them hangs a Pendleton and leather cradleboard crafted by relatives for Szczepanski after the birth of her daughter, Ravin. A carving of a wood canoe is displayed—a miniature replica of the twenty-person one used in the tribe’s annual canoe journey in the Pacific Northwest. Woven between framed photos of past family members lay Szczepanski’s mother’s delicate and meticulous beadwork.

Amongst it all, Szczepanski sits at her dining table scattered with sketches, watercolor paintings and storyboard drawings. Next to her are plastic drawers filled to the brim with art supplies used to illustrate “Goodnight Grande Ronde,” the tribe’s first children’s book. Based off the acclaimed bedtime story “Goodnight Moon”, “Goodnight Grande Ronde” is written in the tribe’s native language, Chinuk Wawa. A trade language, Chinuk Wawa developed at the mouth of the Columbia River and was used intermittently by Native American tribes and traders of the Pacific Northwest.

The Grande Ronde community published the book in 2012 in an effort to help restore the tribe’s language.  It was a significant and celebrative step for the community. The Confederated Tribes of Grand Ronde reservation, one of the nine federally recognized tribes in Oregon, and their Spirit Mountain Casino are located 60 miles south of Portland and 30 miles west of Salem. Their efforts to revitalize their culture have contributed to the ongoing progression of Native American communities across the U.S. who are striving to counteract pervasive colonialism.

For Crystal Szczepanksi, creating “Goodnight Grand Ronde” encompassed more than improving the development of her community and challenging her skills as an artist. She says that illustrating the book was her first healthy risk since recovery from alcoholism. “It was monumental,” Szczepanski says. Every facet of her life has been shaped by art and culture, including her own survival.

Szczepansksi’s exposure to Native American art such as weaving, painting, beadwork, woodwork and scrimshaw art started from a young age. Her mother Eleanor Szczepanski attended the Santa Fe Indian School to study at their established “Studio School” for high school Native artists. In 1977 at age 17, Eleanor got pregnant and gave birth to Crystal, then moved back to her village of only 300 people in Holy Cross, Alaska. By the first grade, Szczepanski’s mother had met a new partner and their family moved from Holy Cross to Eugene, Oregon. Over the next 20 years, Szczepanski grew up enveloped in an atmosphere of art. Her mother and stepfather were both painters. In the home, they worked on collaborative pieces together and encouraged Szczepanski to take part. Additionally, she gained artistic skills in her art classes at North Eugene High School and through her experiences traveling the Pacific Coast to visit tribal communities and powwows as a traditional Native American dance performer.

Despite leaving the relationship and finding support in her current partner David Fullerton two years later, Szczepanski had developed the onset of an alcohol addiction. In 2002, when her daughter was two years old, Szczepanski tried to become a soley social drinker.  Her attempt to consume alcohol only in social situations with friends backfired. Szczepanski’s alcoholism worsened, and over the course of 10 years, drinking was her coping mechanism. She compensated for overwhelming feelings of self loathing and past trauma with alcohol. In the three years leading up to 2012, drinking invaded every aspect of Szczepanski’s life.

“I’m out on work nights, I’m not coming home,” she says, describing her addiction throughout that time period. “Whatever it took for me to get numb and not feel anything.”

Szczepanski became increasingly consumed until waking up one morning during the spring of 2012 in a hospital bed alone, afraid and feeling hopeless.

“It’s like you’re out in the middle of a desert and you’re just a little speck and there is nothing around you, just loneliness,” she says. “I hit my rock bottom.”

Szczepanski had no cell phone and no support. The only number she could remember was her partner’s, David Fullerton. Fullerton took Szczepanski to the home of her uncle, Joe Martineau, a spirit advisor and chemical dependency counselor at the Grand Ronde clinic.

“A big issue for Crystal was her self-esteem,” Martineau says. “Her feelings of worthwhile were at an all time low. You could see it in her eyes. She had no life in her eyes.”

In the living room of her uncle’s home, Szczepanski sunk into the couch, drowning out words of affection her loved ones spoke to her.

A heaviness grew in her body and a numbness filled her mind. Szczepanski didn’t care if she lived or died. “I’d never felt like that, the lowest, darkest place I’d ever been,” she says. “Then I really understood—you either die from your addiction or you hit rock bottom.” But Szczepanski decided there was another course.

Part of healing for Szczepanski was understanding the intergenerational trauma of the Native women before her. She attended a women’s workshop held by the White Bison organization, a non-profit comprised of Native American/Alaska Native sobriety leaders who use cultural knowledge to support addiction recovery.

From the workshop, Szczepanski started to see how past experiences of sexual and mental trauma affected the women in her family. After this experience, she could see the immediate value in working to restore her mental health.

Szczepanski says. “I have a positive impact that heals the future generations after me too.”

Expressing herself through art provided Szczepanski with a new avenue to treat and heal her alcohol addiction. During her third experience in rehab at the Hazelden Treatment Center in Newberg, Oregon, she attended an art therapy clinic for the first time. The instructor asked her  to draw a representation of her daughter, partner and herself.  She picked up a pen and keenly drew a perfect circle. “It was pure and balanced,” Szczepanski says. “It was my daughter.” Then, she drew an oblique rectangle with sharp points of protection which represented Fullerton, her partner. At the time, she recalls, the sharp corners were directed in “a straight path, to protect himself and Ravin against my unhealthy behavior.” With charcoal, Szczepanski scribbled vigorously across the page and then crumpled it into a ball. She set it next to the perfect circle and protective rectangle. “That’s me,” Szczepanski said to the instructor. “Broken, ripped, disgusting, nasty, pitiful.”

Seeing art as a new outlet, Szczepanski started to think constantly about creating.

“I was hungry for anything I could learn,” Szczepanski says.  “Whatever it was, I tried it.”  She started basket weaving, and then moved into beadwork. She studied and practiced the rose designs of the Shoshone tribes, the geometric patterns of the Crow tribe and the floral design of the Lakes and Athabascan tribes in Alaska. She drowned out the voices from her alcoholism that would constantly gnaw at her mind. “It’s like you have a wound and you’re not taking care of yourself, and you open it up to clean it out,” she says.  Each time Szczepanski took the time to create art, the voices and temptations got quieter. Szczepanski found art as a way to express what words failed to do. “I started to heal through my culture,” she says.

Healing herself and her surrounding community went hand in hand. As a language specialist for the Grand Ronde tribe and past teacher of the Chinuk Wawa language, Szczepanski was approached by Ali Holsclaw, a Chinuk Immersion teacher, to illustrate “Goodnight Grand Ronde”. Szczepanski greeted the task with a bit of apprehension. Although she spent much of her time using art as an outlet for addiction, Szczepanski did not consider herself an artist.  Determined at least to try, she sought after the project as her first healthy risk since recovery.  Szczepanski’s budget limited her access to materials. Problem solving, she quietly took Crayola pens and crayons, colored construction paper and Elmer’s glue from her daughter’s classroom.

“I took whatever resources I had,” Szczepanski says,  “and made the best of it.”

When choosing how to illustrate each page of the book, Szczepanski was left to use her own creativity. She wanted to incorporate familiarity and locations of significance to the people of Grand Ronde.  In her illustrations she depicted places such as the Spirit Mountain, a sacred place of prayer, the cedar longhouse on the reservation and moments from Grande Ronde’s round dance ceremony each year.

Since accepting the task of illustrating “Goodnight Grand Ronde”, Szczepanski has maintained her sobriety for the past five years. Martineau, Szczepanski’s uncle and spiritual advisor, says he has seen her heal since she began creating art. “Her culture and her art were hard to pick up when she was using because she didn’t think she was deserving of those things,” he says.

Without the constant support of relatives and members of her community, Szczepanski believes she wouldn’t be where she is today as a recovered alcoholic and an addictions counselor for the tribe.

“Through art, she finds some connection and identity,” Martineau says. “The art brings pride and worthiness. It enhances the rest of what she is accomplishing.”

While the opportunity to express her art in “Goodnight Grand Ronde” helped Szczepanski heal, it wasn’t only about her. “It was for the language, for the kids, for the families and for the community,” she says.

Revitalizing language was and continues to be a nourishment for Crystal Szczepanski and the Confederated Tribes of Grand Ronde.  “We need an inspiration and a connection when we heal,” Martineau says.

“Language and culture is as important to me as water and air,” Szczepanski says. “This language lives here, it’s the language of the community. This culture is a part of all of us.”