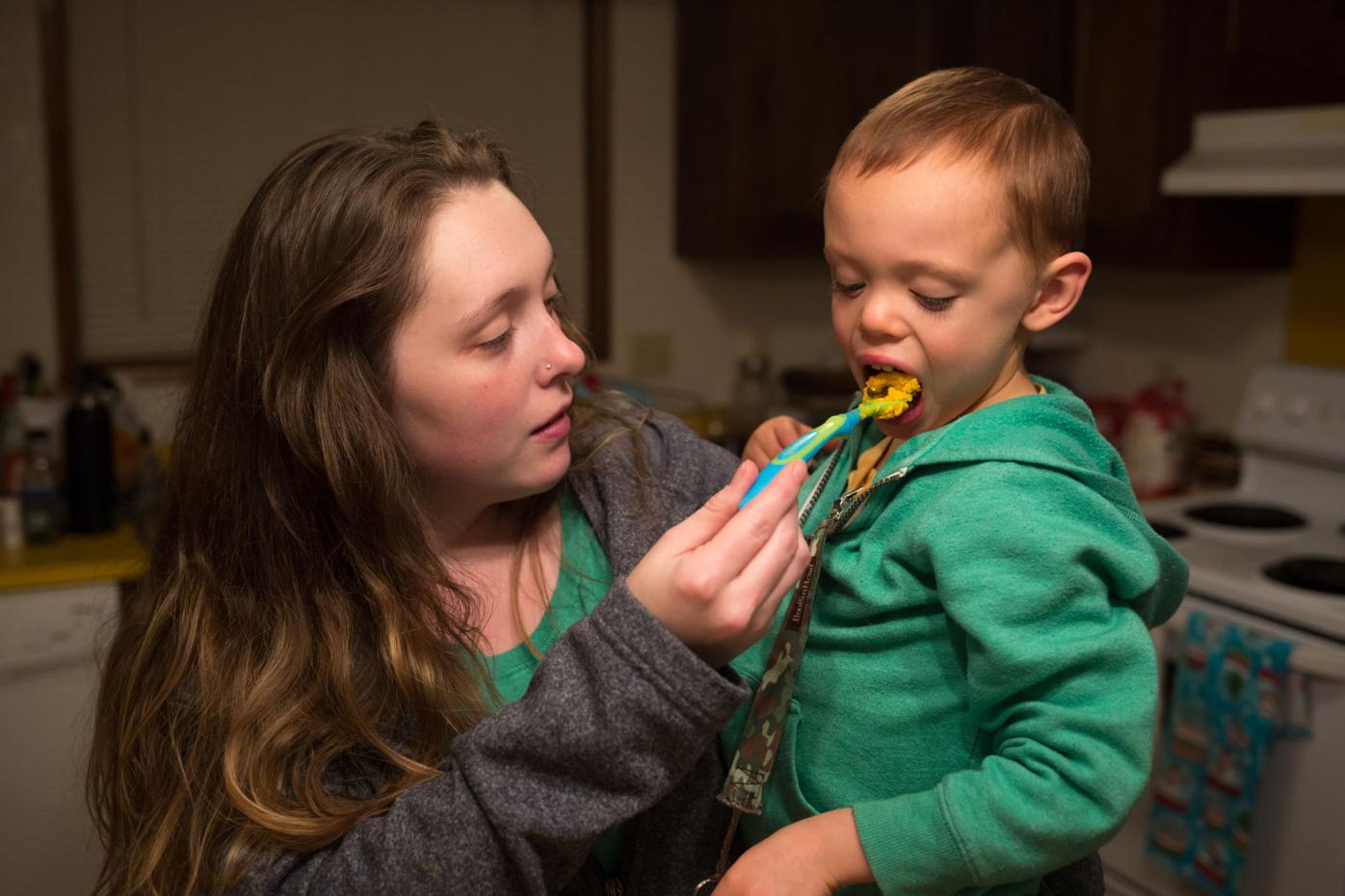 Before dinner, Paige gives James his medicine in the form of a cannabis oil filled capsule. James takes about 45mg of CBD and THC/THCA oil throughout the day. The CBD helps reduce his seizures while the THC and THCA helps regulate his emotions and impulse control. “He is more able […] 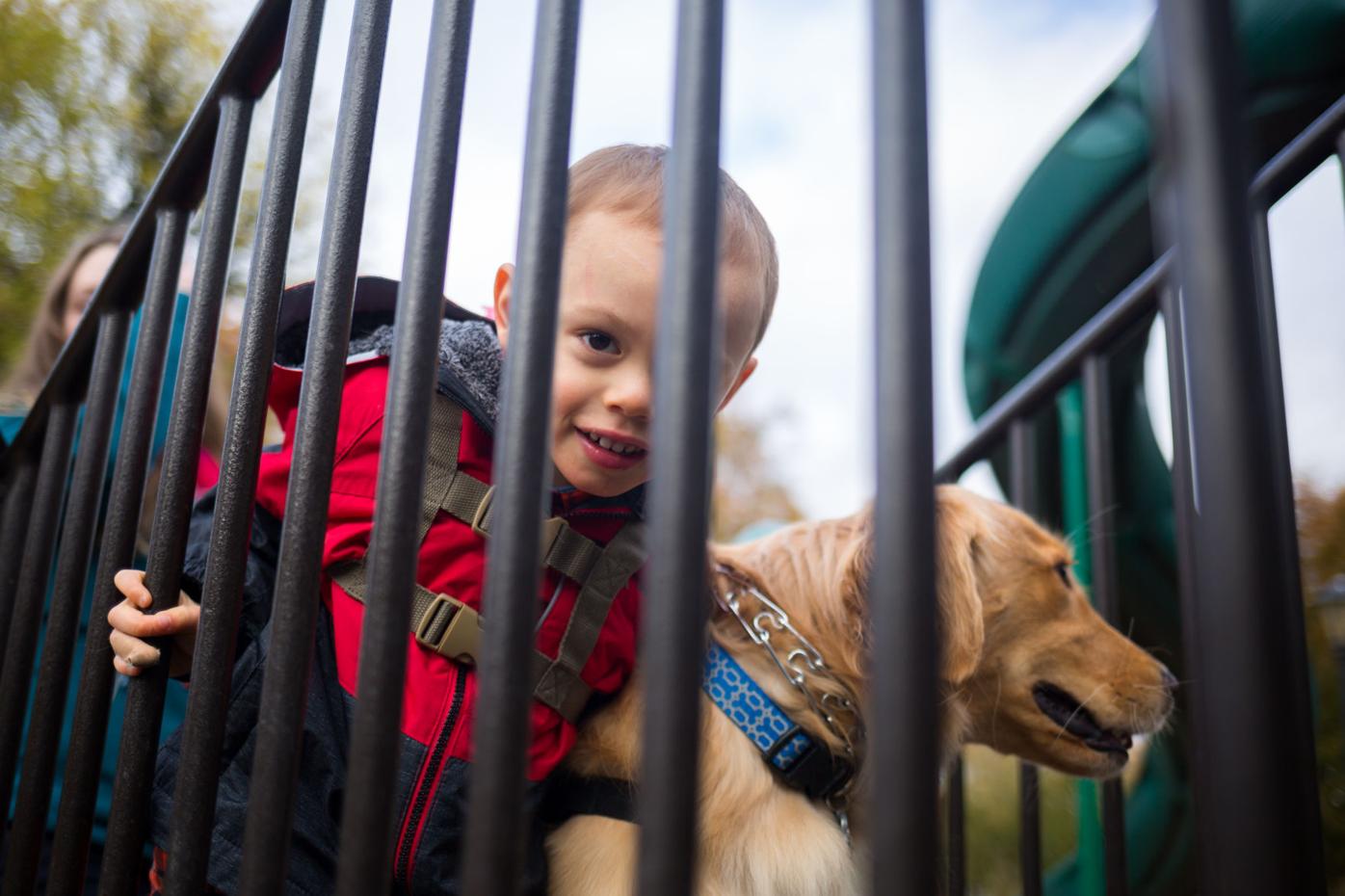 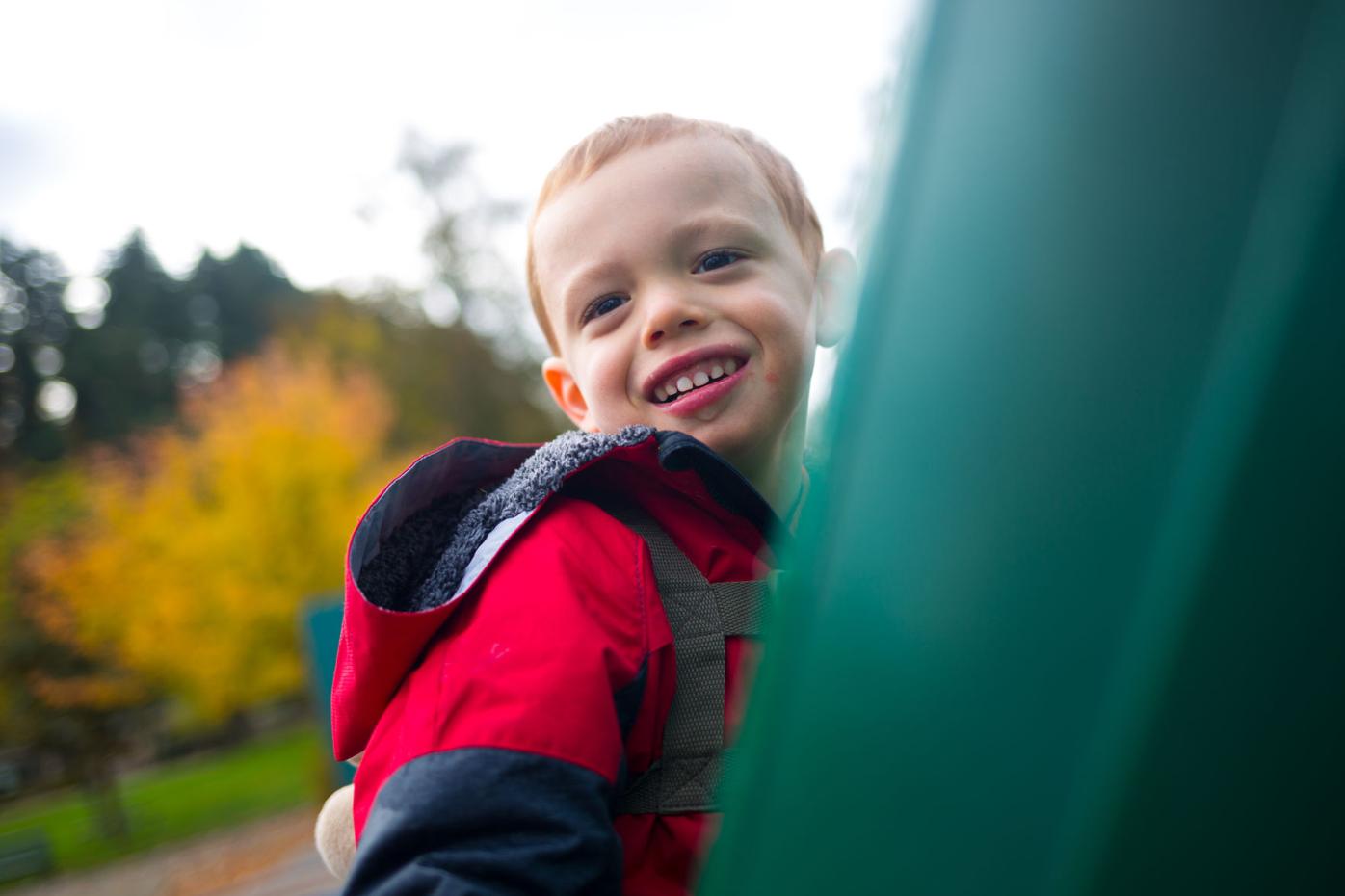 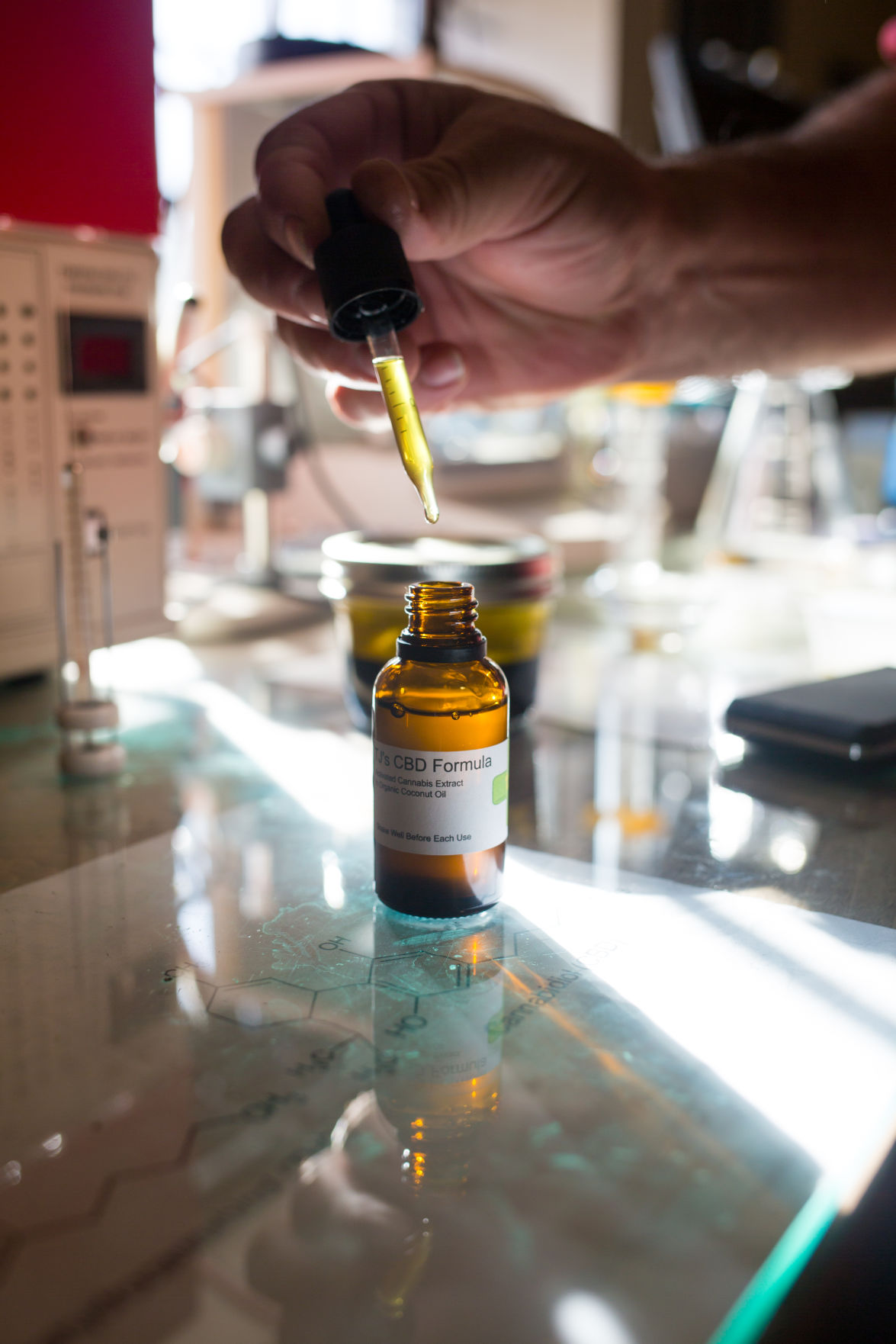 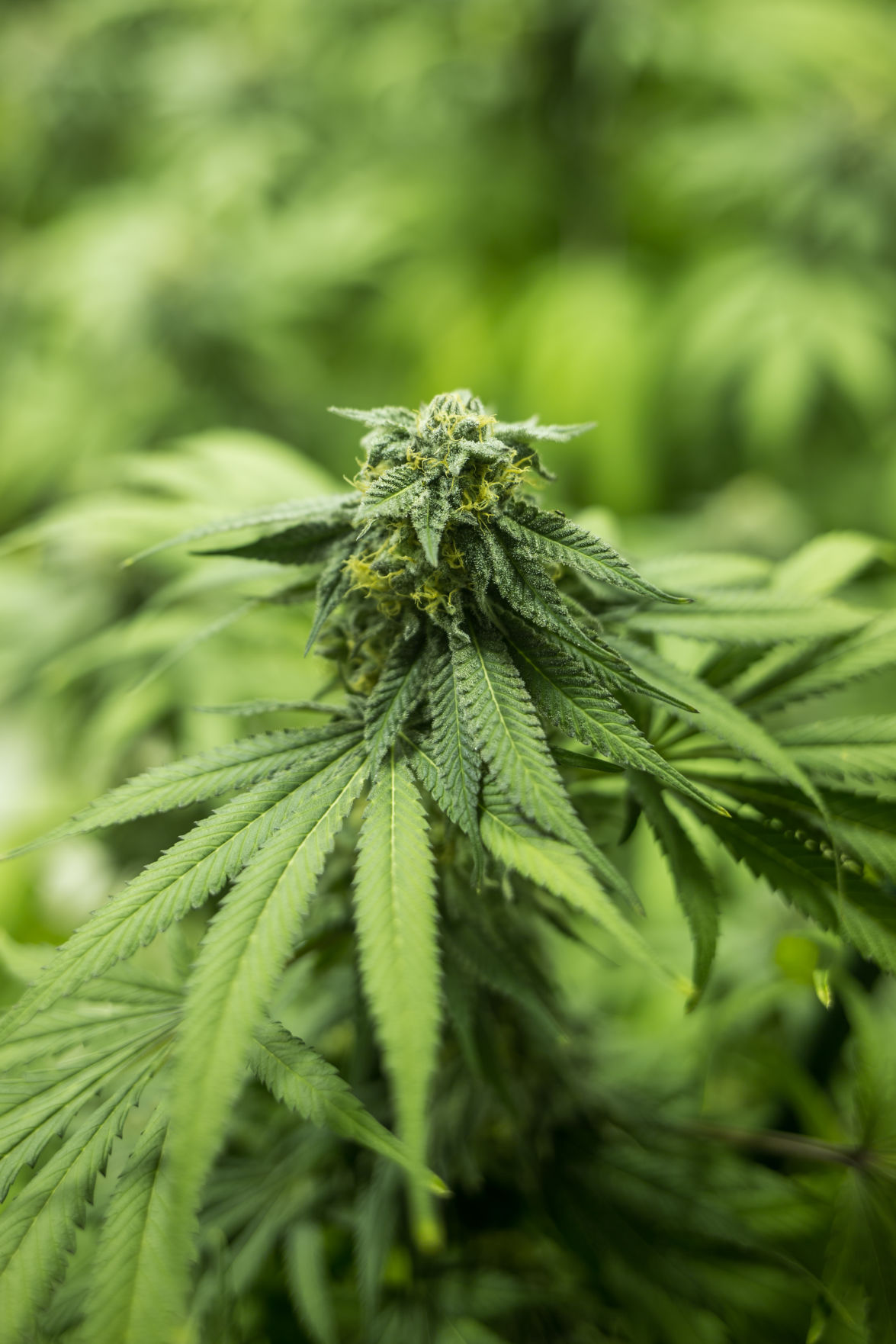 Before dinner, Paige gives James his medicine in the form of a cannabis oil filled capsule. James takes about 45mg of CBD and THC/THCA oil throughout the day. The CBD helps reduce his seizures while the THC and THCA helps regulate his emotions and impulse control. “He is more able […]

Springfield, Oregon mother Paige Hall starts each day by giving her six-year-old son James a dose of cannabis extracts to help combat his epilepsy. Paige distributes the extracts into a capsule while James rambunctiously chases his service dog Dave, a golden retriever.

Paige and James Hall are one of 140 families in the Forrest Initiative program. The Forrest Initiative is a program at TJ’s, a Eugene cannabis dispensary, that provides CBD and THC extracts at no charge to families of children who meet certain medical criteria. James was diagnosed with autism at two, and epilepsy at three. He and his mother spent two years testing different medications prescribed by doctors to calm the seizures brought on by his epilepsy. During its peak, James was experiencing five to six extreme seizures an hour.

According to Project CBD, a California nonprofit that specializes in Cannabidiol research, CBD is a cannabis compound that regenerates and repairs nervous system tissue and offers relief from a variety of ailments. CBD does not have the psychoactive qualities associated with Tetrahydrocannabinol (THC), so it does not get the user high. CBD can also reportedly counteract the psychoactive qualities of THC when the two are used in unison.

The compound has been found by medical marijuana advocates to reduce seizures, chronic pain, inflammation, anxiety and other conditions without hindering mental clarity. Because of this, CBD is increasing in popularity among people with chronic illness and is used to treat and alleviate everyday ailments such as headaches, anxiety and pain.

Despite this, CBD is recognized as a Schedule 1 drug, meaning the federal government categorizes it as having no medical benefit. As a result, it can be difficult to acquire medical CBD because most testing and research of its benefits is federally illegal. The Philadelphia Children’s Hospital is currently conducting one of the first medical studies on CBD use, which could potentially help deschedule the drug and allow more people to access its medical benefits. The study will include data from patients who are a part of the Forrest Initiative.

The initiative first began in 2014 when TJ’s owner Travis Mackenzie met a client who made their own alcohol-based CBD extracts to treat chronic seizures. The homemade extracts were made incorrectly and inefficiently, Mackenzie says, so he formulated a new, more effective extract for the client. After Mackenzie prescribed her 6 mg of CBD per day, the client’s seizures reduced from up to 90 a month to almost none within the first few months of use. According to Mackenzie, just one outdoor cannabis plant has the potential to make over 137 years of medicine for one person.

“When I realized how tiny that dose was, I realized it would be practically free for me to offer this to other people,” Mackenzie says. “My donation really is the labor and the raw materials.”

Now, TJ’s dispensary accepts any families who qualify for the Forrest Initiative to receive free cannabis medicine. The main qualifications for the program are being under 18, having a medical cannabis card and living in Oregon or Washington.

Paige is grateful to have found the Forrest Initiative to help her son. After many appointments and medication switches, Paige asked James’s neurologist about potentially using CBD as part of treatment for his epilepsy. The neurologist was not on board with the idea, but Paige went forward with the treatment anyway. CBD is rarely condoned by medical professionals because it is a Schedule 1 drug. In October of 2016, Paige got a medical card for James and signed up for the Forrest Initiative.

“I would commit felonies if that’s what it took to get my son’s medicine,” Paige says.

After just three days of the treatment, James’s seizures reduced from five to six an hour to five to six a day. Originally, his seizures were severe, consisting of extreme loss of muscle control and lasting up to an hour.

James is still not completely pharmaceutical-free. He remains on a low dose of his former doctor-prescribed treatment alongside the cannabis extracts. Through the Forrest Initiative, Paige also receives THC and THCA oils that, in combination with the CBD, keep James’s seizures to a minimum. James now has about three mild seizures a day, usually only a few seconds in length and with very little body movement. Paige says that sometimes she can only tell he is experiencing a seizure by the way his eyes are moving. She customizes James’s dosages based on how much stimulation he is likely to experience in a particular day.

“Unfortunately, the whole beast of epilepsy is that the brain gets used to medication,” Paige says. As the brain gets routinized with a certain dosage, the medicine can become less effective. After six months of experimenting with different ratios of the oils, Paige was able to vary the day-to-day dosage with an understanding of how the ratio will impact James’s behavior.

Paige explained that even though the cannabis treatment was originally aimed at helping with his epilepsy, it has also benefited James’s autism in a number of ways. James has gradually developed a calmer temperament and is able to focus on tasks and communication with more purpose. Additionally, he is able to follow directions more closely and better understand games and toys. Paige also says that James has become more imaginative over the course of the treatment—he sometimes puts on her glasses and pretends to be her. This is special for Paige because a trademark of autism is not seeing the “function” of imagination and joking, and therefore not partaking in any communication that is not need-based.

James is now a year into his cannabis treatment, and is able to live a much fuller and happier life. His service dog Dave helps him navigate the world, and makes him feel more comfortable and independent. Dave enables James to run around and play without always needing to be right next to his mother in case of an emergency.

“Even when James is taking a bath, Dave will be sitting right next to the tub,” Paige says. “They’re best friends, they do everything together.”