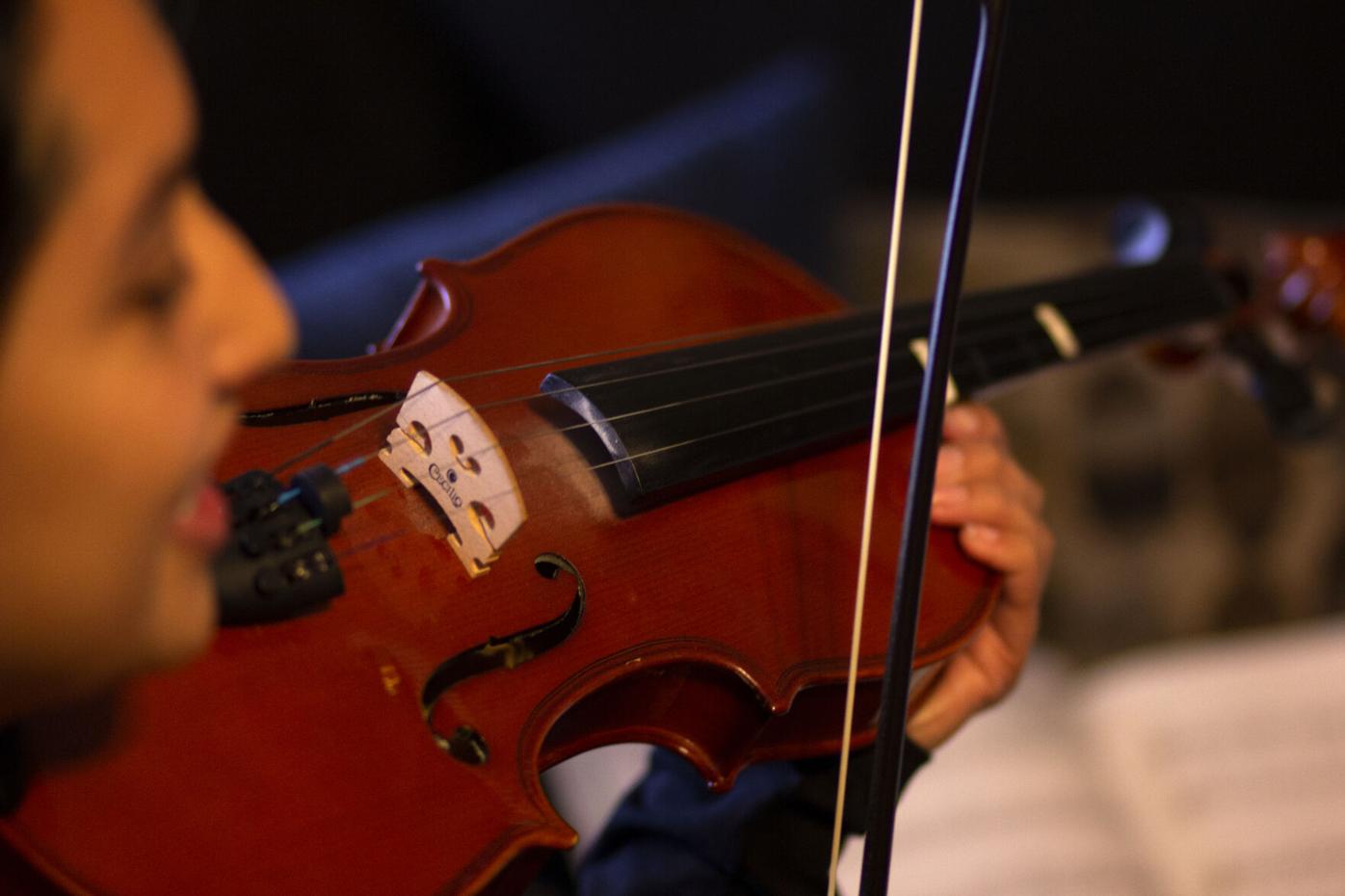 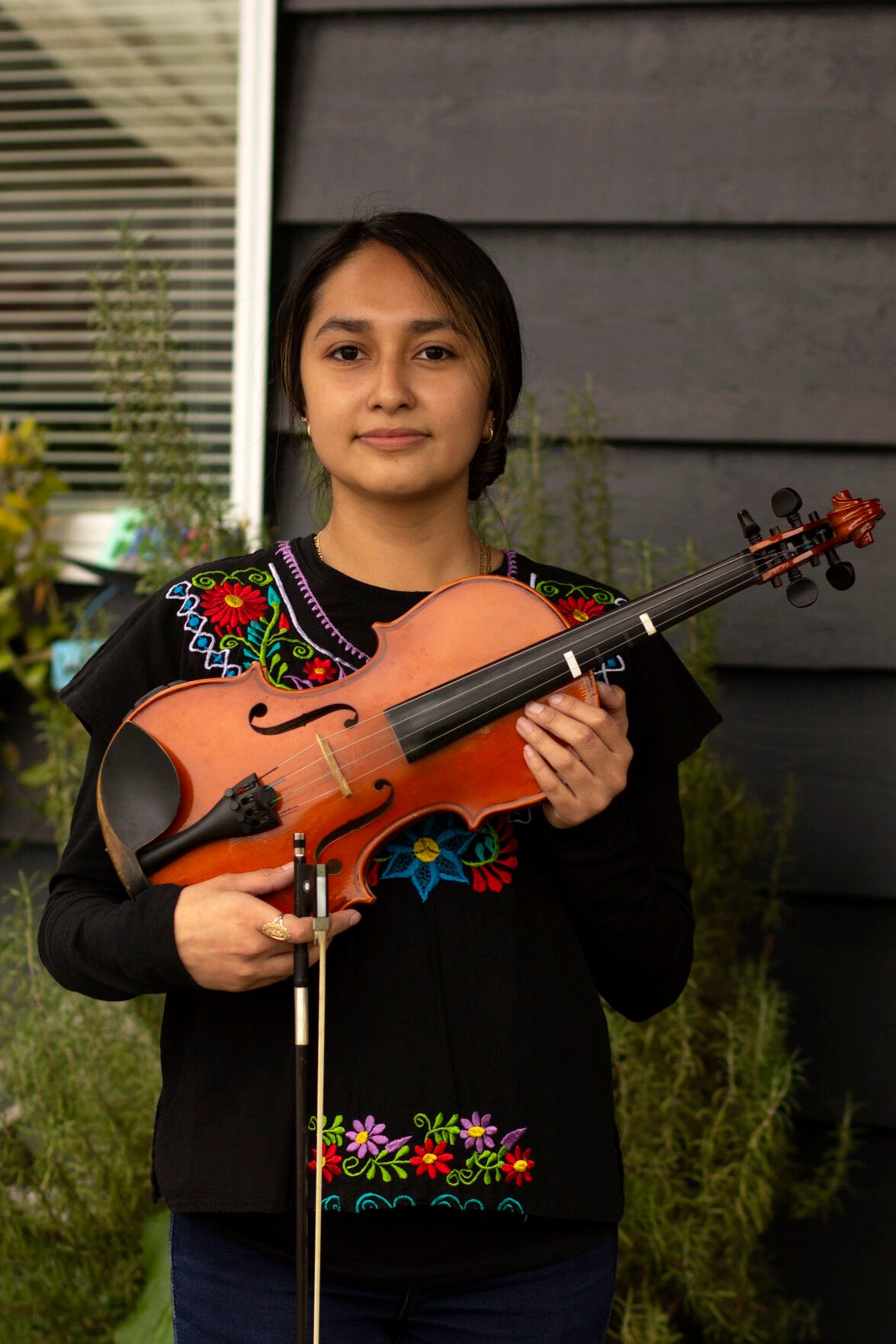 For Jennifer Ramirez Diaz, playing mariachi music allows her to connect with her Mexican heritage and culture. “Since we’ve been here my whole life, I never thought I would experience that or experience a little part of Mexico,” she says. 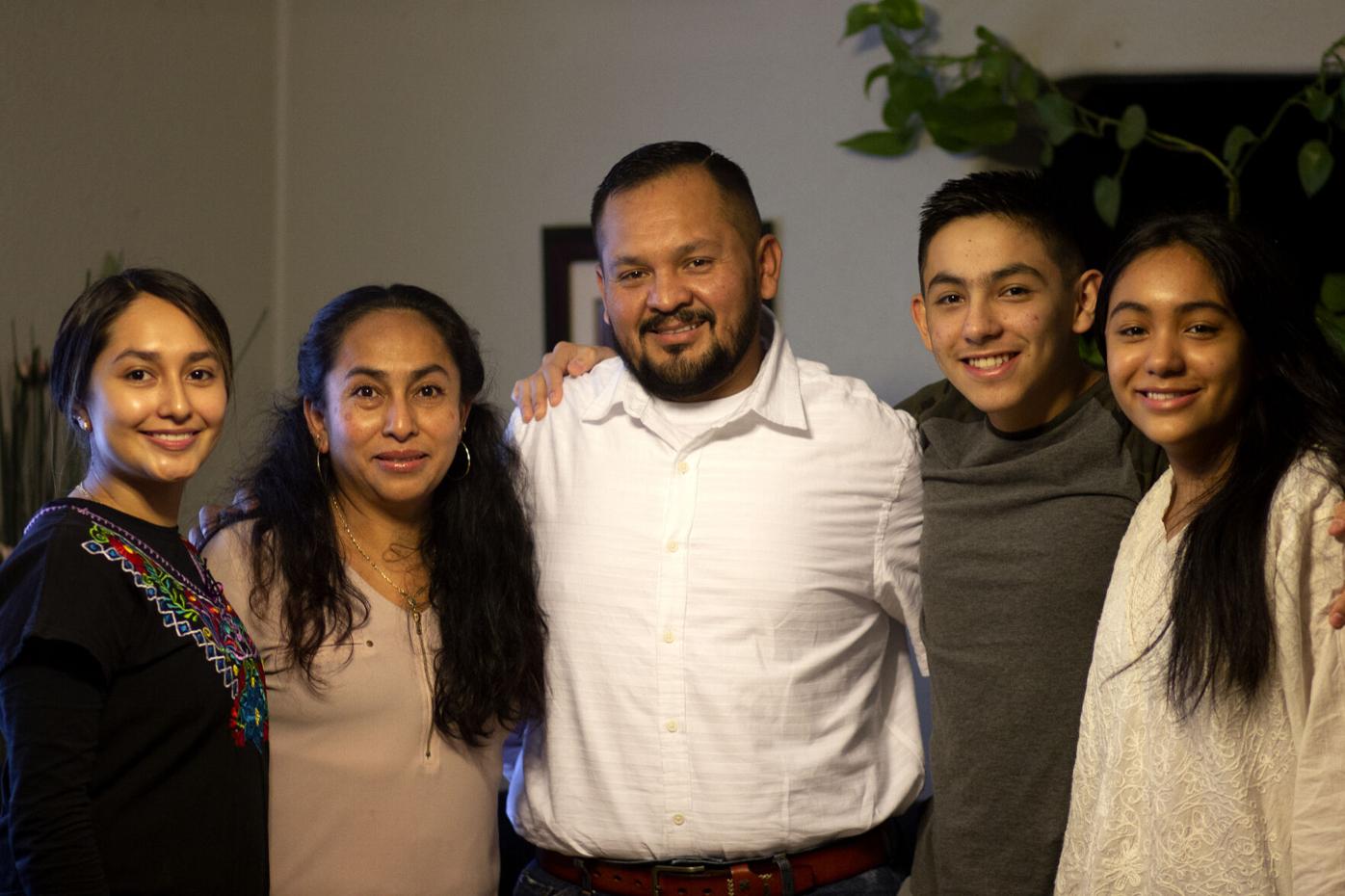 Ramirez Diaz stands with her family (left to right) including her mother, Felipa; step-father, Cesar; younger brother, Felipe; and younger sister, Alejandra. Her brother Chris, who was also part of Mariachi del Sol when he was in high school, is not pictured. 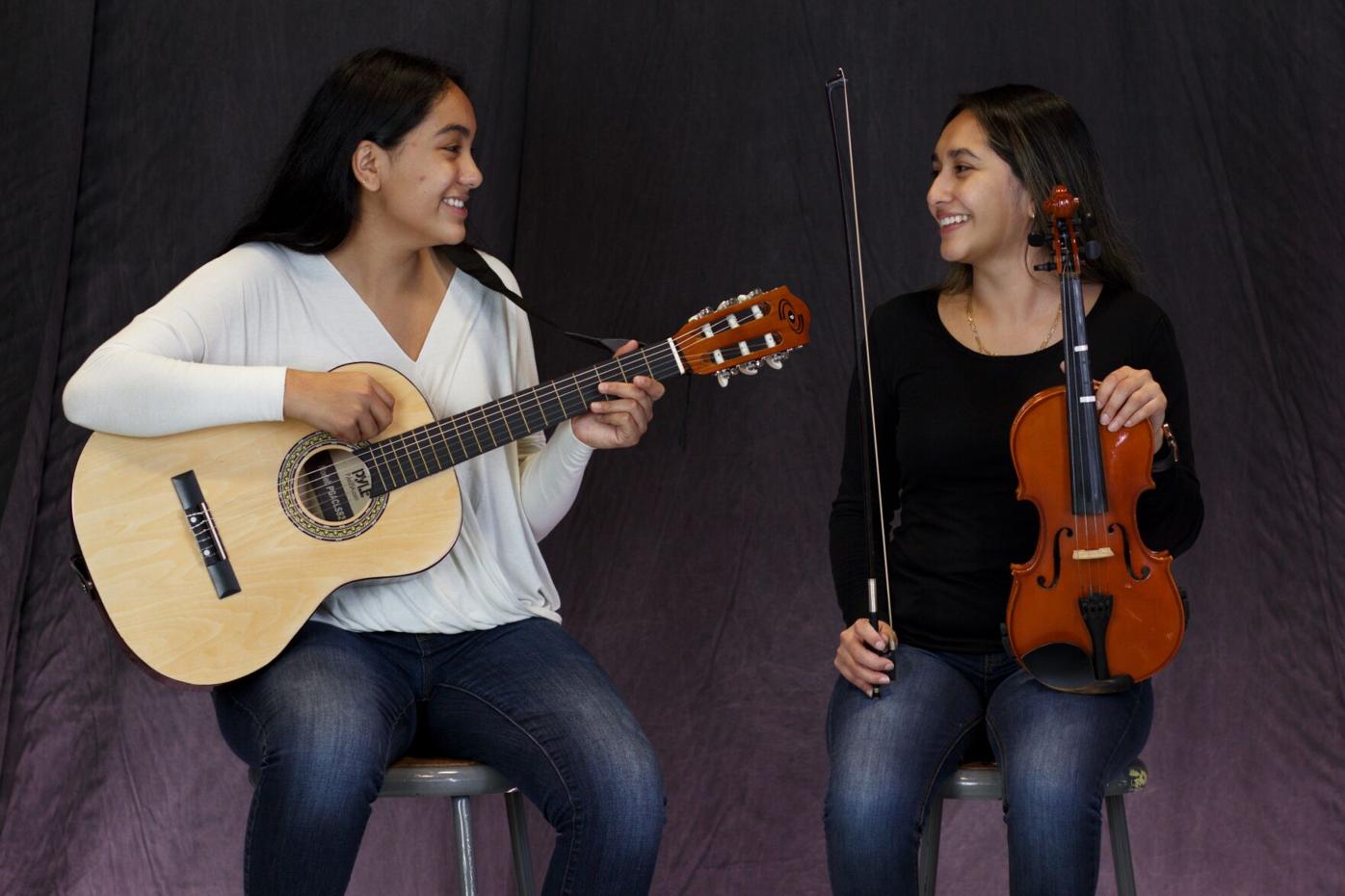 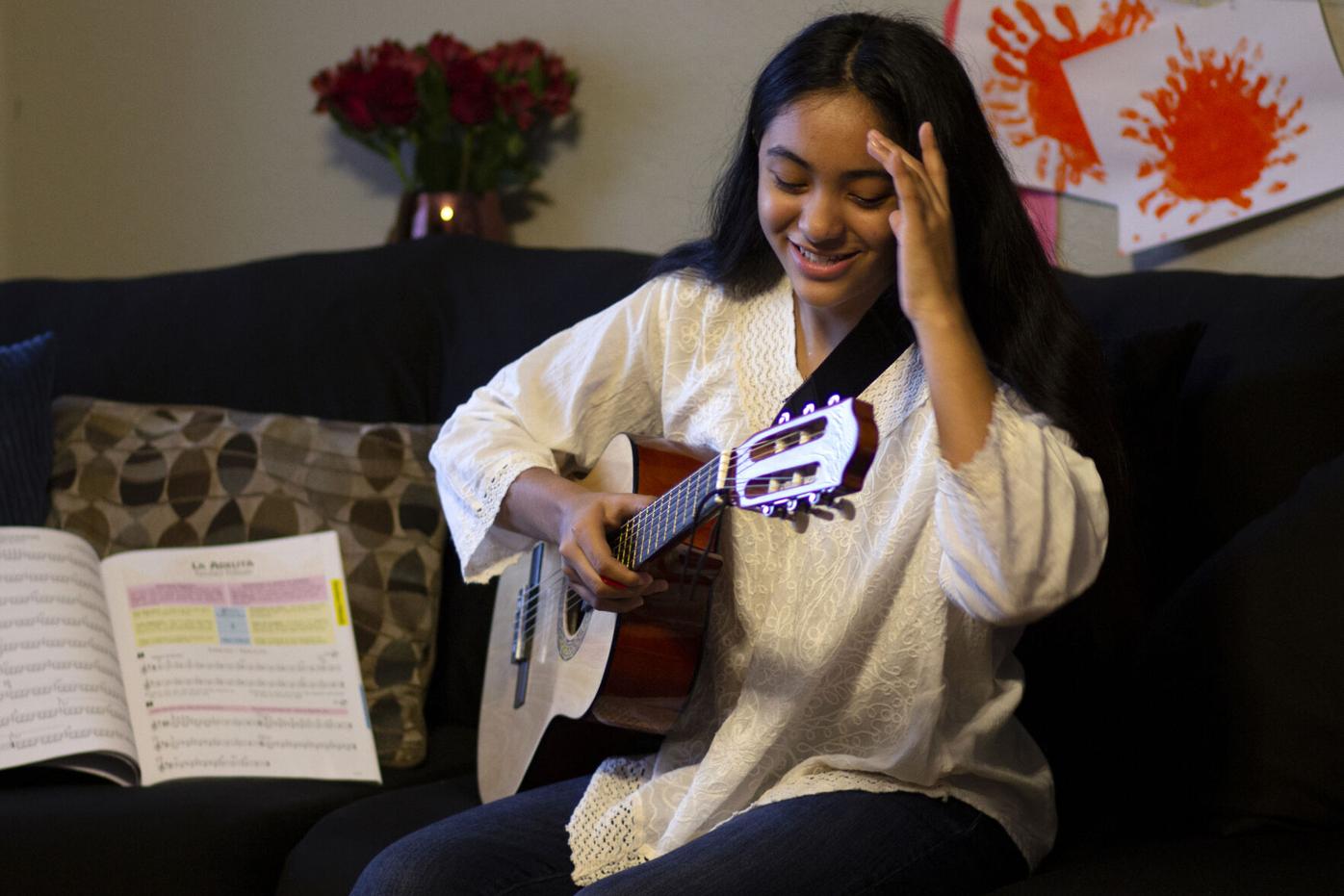 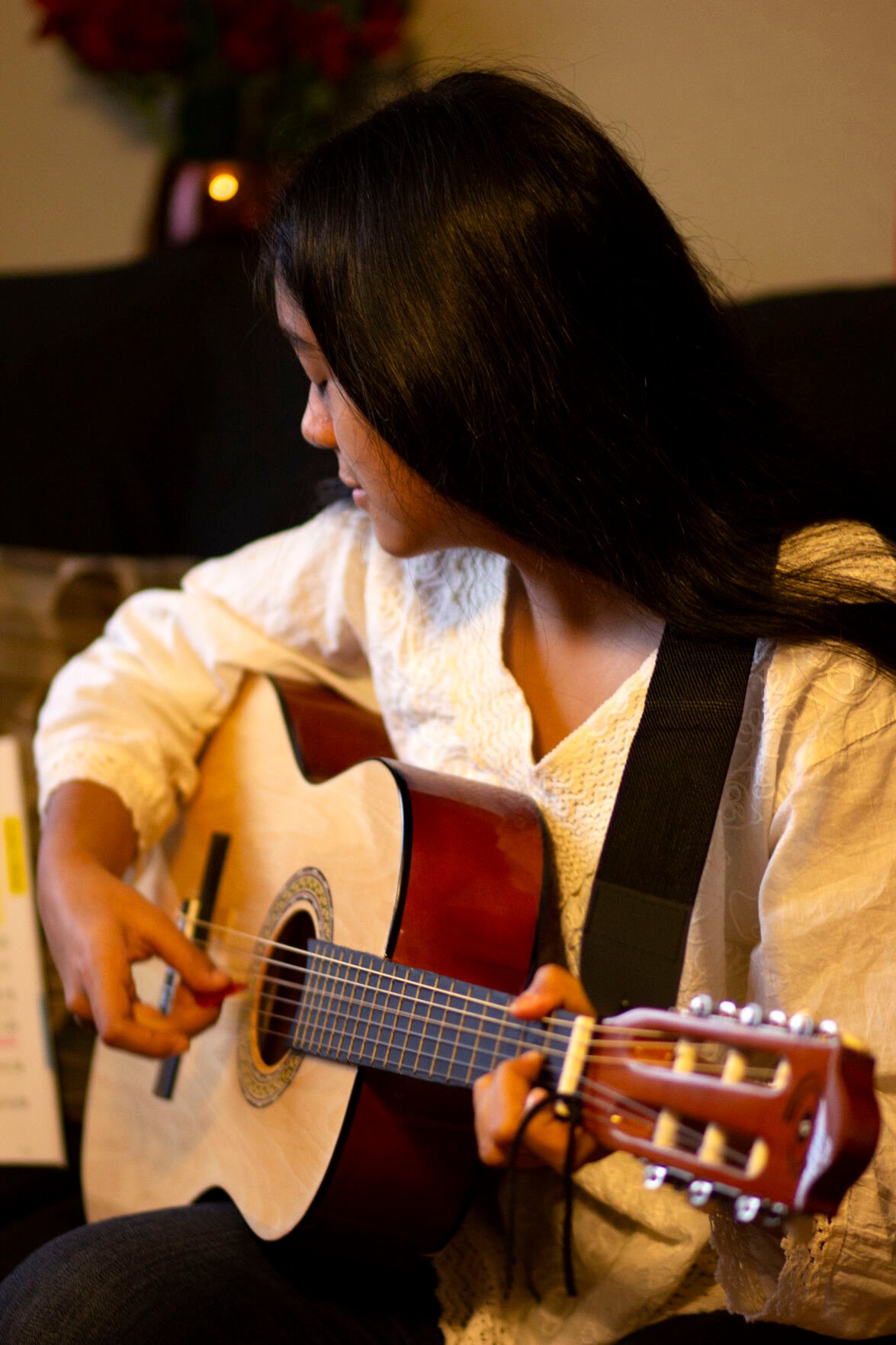 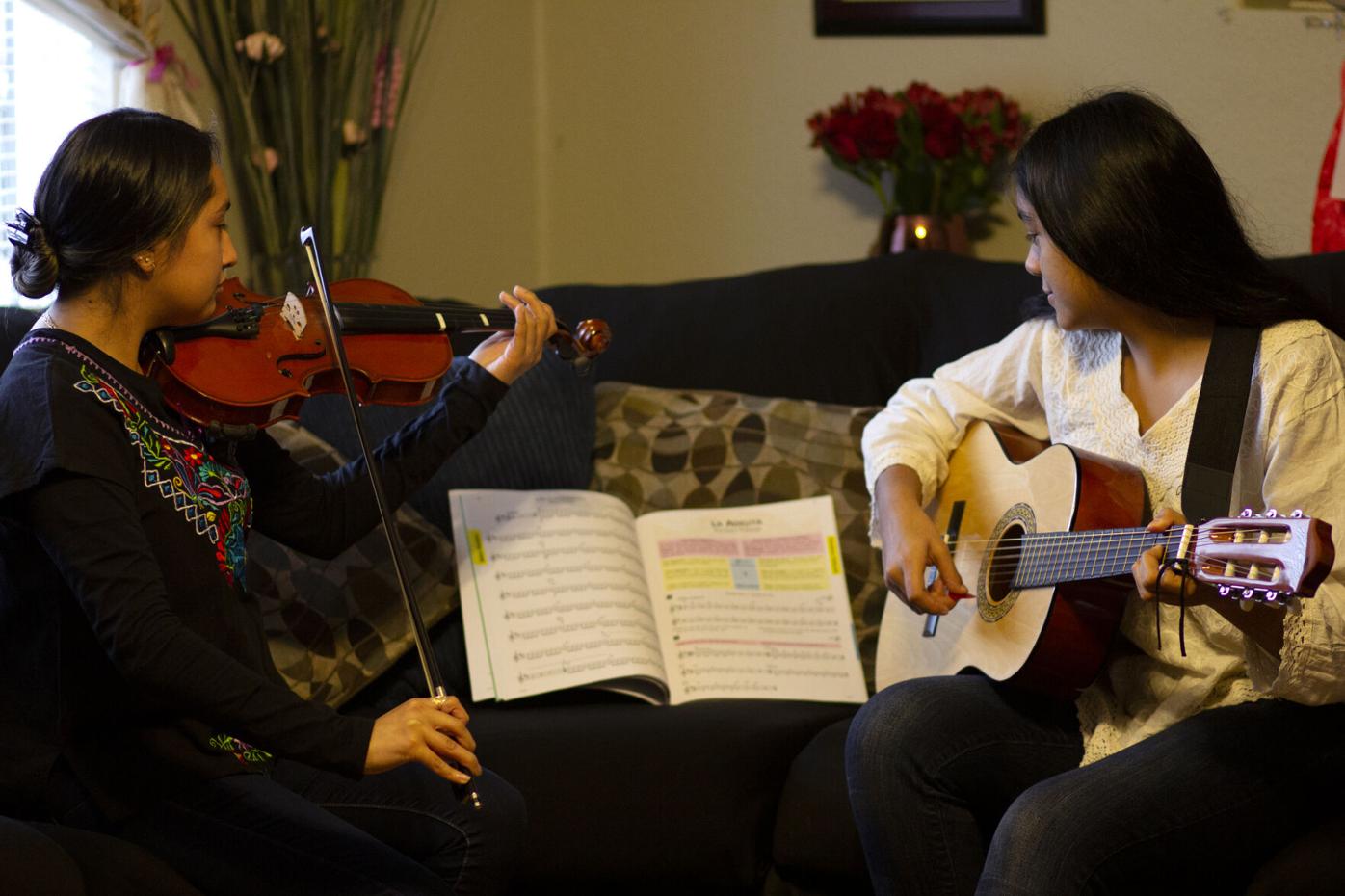 Ramirez Diaz says she’s proud of how fast her sister, Alejandra, has learned mariachi music. “I actually recorded my sister playing not too long ago because I was so ‘wowed’ to hear and see her learn,” she says.

Jennifer Ramirez Diaz stood in the small lobby of the restaurant El Torito for her last performance at the end of a 10-hour day of gigs on Cinco De Mayo in 2015. With taped and glued fingers raw from plucking strings, her band Mariachi del Sol set up their music stands and began to fill the room with music. Their regular set list included all of the songs they had spent the year learning in class, their most notable being their rendition of “La Bamba,” which allowed band members to improvise solos mid-song. Ramping up their energy with every strum, the sound of their music quickly overpowered the conversations of patrons.

Now 21-years-old and graduated, this performance was one of the many times Ramirez Diaz spent the day with her chin resting against her violin during the four years she played in Springfield High School’s mariachi program.

With new opportunities for high school students to play mariachi popping up all over Oregon for the past decade, Ramirez Diaz is representative of a community of kids who were given the chance to learn about their culture through the Oregon public education system. With nearly 500,000 people of Hispanic origin in Oregon, these programs mark an important shift in the state’s approach to cultural representation in education. This has benefitted students like Ramirez Diaz, who says the program allowed her to learn about her culture through experience.

Ramirez Diaz says that her stepdad is from Guadalajara, Mexico, where mariachi is so popular that you can hear the music being played everywhere at all hours of the day. Because of this connection to the music, Ramirez Diaz grew up listening to popular mariachis. “It’s one of the things we have here, since we are here and not in Mexico,” she says. “So, we grow up listening.”

Ramirez Diaz was inspired to start playing mariachi music when she saw an earlier generation of Mariachi del Sol play around 2010 when they came to her school at the time, Maple Elementary. It was the first mariachi Ramirez Diaz had seen in person. Upon learning that the program would be open to anyone who attended Springfield High School, she joined the orchestra program at Maple. This led her to a community mariachi program in middle school and then to Mariachi del Sol.

During her time in the program, Ramirez Diaz grew close with her bandmates. “When you’re with a whole group like that, where you all just enjoy the music, you want to do great things,” Ramirez Diaz says. “I feel like since we all share that love for music, it always made my heart beat super fast when we would play together and just made good music. It just made my heart happy.”

She says she loved seeing people come out of their shells and improve as musicians through the positive and fun environment that was created around mariachi. Because she had such a great experience, she convinced her younger brother, Chris Ramirez Diaz, to join the band when he entered his freshman year while she was a sophomore. They played together until she graduated in 2017. Though her brother played the flute, a non-traditional instrument for mariachi, he was welcomed into the program.

“Every single instrument, every person, matters,” Ramirez Diaz says. “It was such a diverse group. I loved watching people learn and grow while they were a part of it.” According to the National Association for Music Education, mariachi has been around since the 1700s. It developed in the Mexican state of Jalisco and has since been seen as a cornerstone of Mexican culture. Mariachis play at holiday celebrations, birthdays, funerals, family parties and many other places. While they are traditionally male, this is no longer the case. Modern groups now include women and are inclusive of many Latinx cultures.

While this program has been a positive experience for Ramirez Diaz and her siblings, it has also allowed them to share what they’ve learned about mariachi with the community through gigs like the ones they play on Cinco de Mayo. This includes trips to Latinx holiday events, elementary schools and — most notably for Ramirez Diaz — retirement homes. “That was one of my favorites because, boy, you would look at their faces and they would dance, clap, sing along,” she says. “They just looked really happy and that brought happiness to me as well.”

Springfield High School began offering its mariachi program to a small group of students in 2008, following in the steps of Woodburn High School, which started its mariachi program in 2003. Before the creation of these programs, there were no ethnicity-related music programs in the Oregon public education system. After their inception, these programs have grown in popularity and are now available in many Oregon cities including Hillsboro, Bend, Redmond and Ashland. While sources differ on how Springfield High School’s mariachi band started, the program has also grown significantly and now includes two different class sessions: Beginning Mariachi and Advanced Mariachi. The advanced group is populated mostly by upperclassmen and plays gigs in the community to fundraise for bigger projects for the program, like their biennial trip to perform at Disneyland.

Now that Ramirez Diaz and her younger brother have graduated and moved on from the band, they have passed the baton to their younger sister Alejandra Hernandez Diaz, who is now learning guitar as part of the Advanced Mariachi class. Though it is currently over Zoom due to COVID-19, she is excited to get started. Alejandra says that the transition to Zoom was made easier thanks to their band director Jon Bridges. She says he makes an effort to show students how each chord is played then asks them how they are doing when they try it on their own.

Alejandra grew up watching her siblings play in the mariachi band, which convinced her to follow in their footsteps with their constant encouragement. "I’m grateful for the opportunity because not all of the schools have it,” Alejandra says. “I’m just happy that I could be part of it and learn something that’s not usually taught around here."