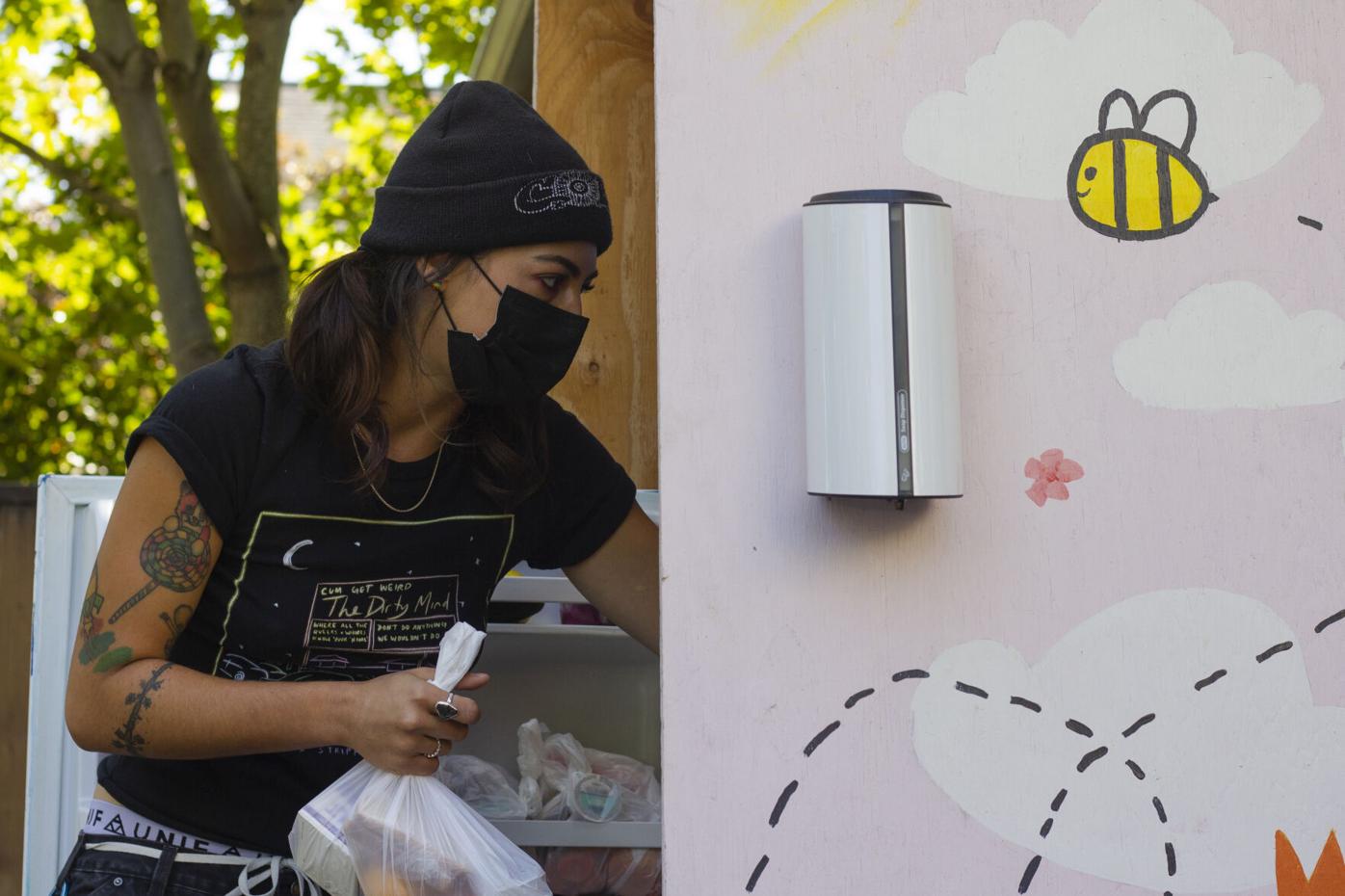 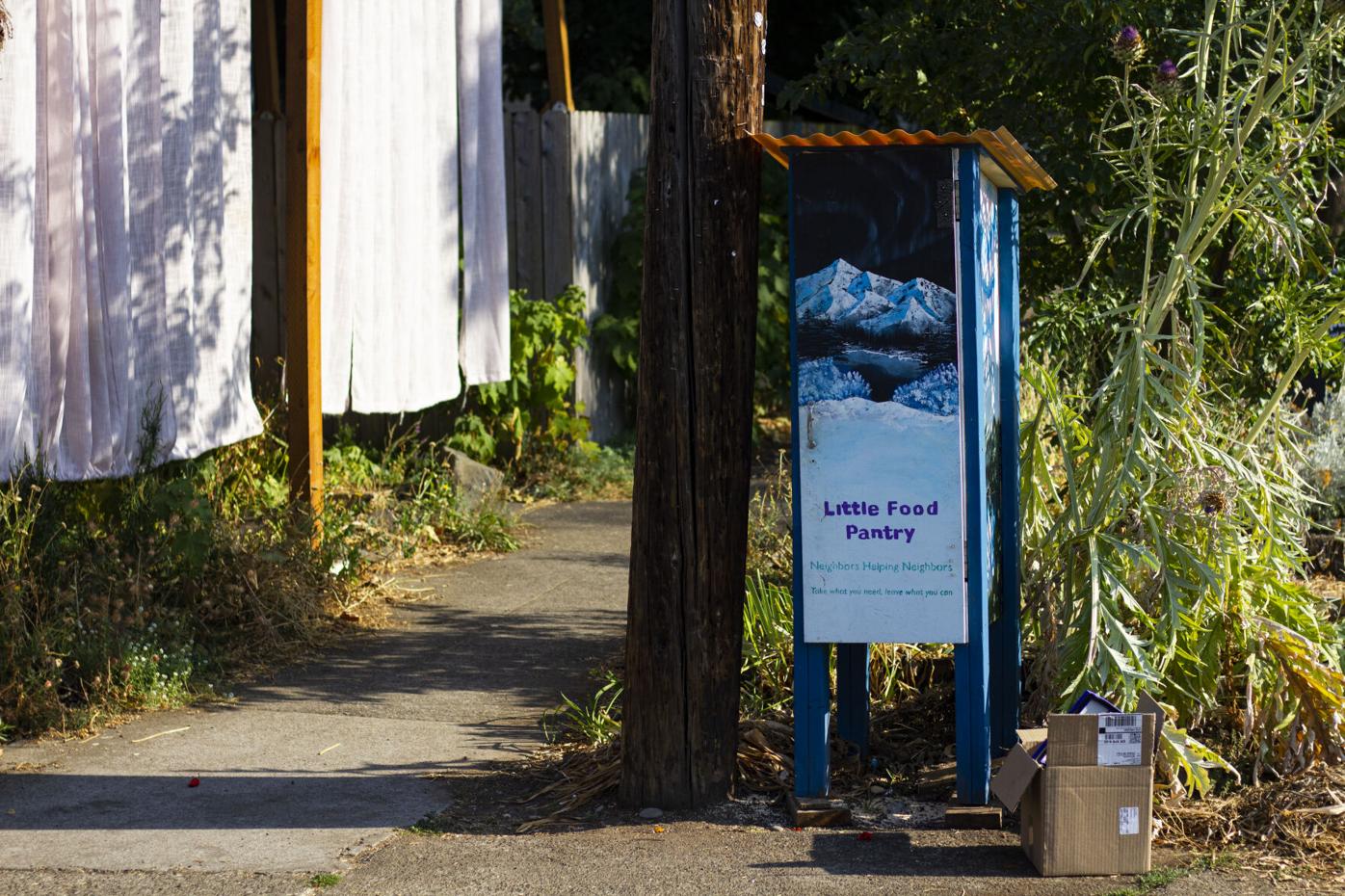 A free food pantry stands on the corner of West 4th and Madison street. The pantry is one of many free pantries around Eugene, each of which have a different design painted on it, that offer free food to Eugene residents. 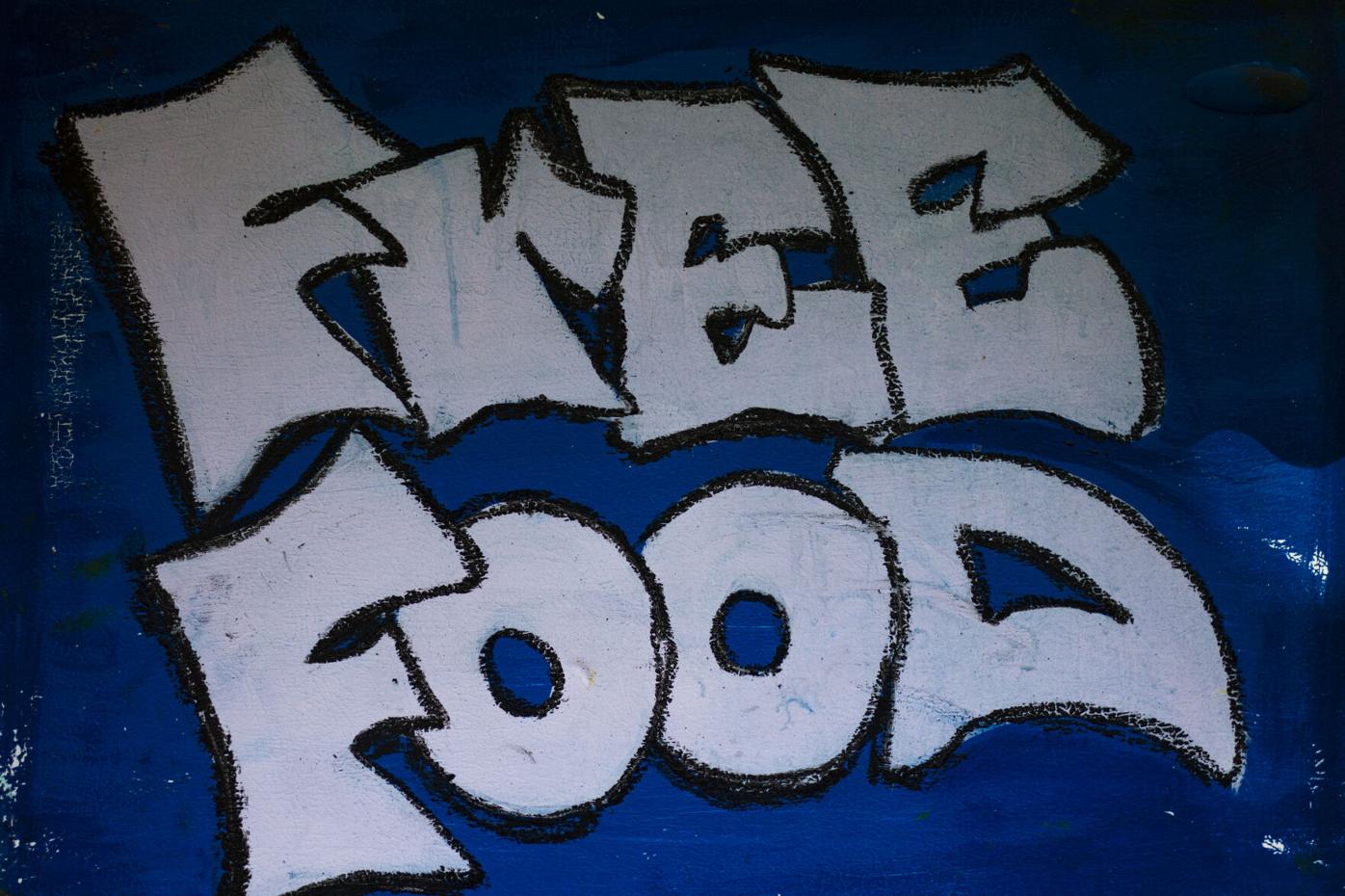 The words “Free Food” are painted on the front of the community fridge located on 18th and Alder. According to Eugene Community Fridge, even though people are hesitant to host fridges due to the risk of litter build up, the fridge sites are often trash free and are cleaned every time a volunteer from the organization comes to fill the fridge. 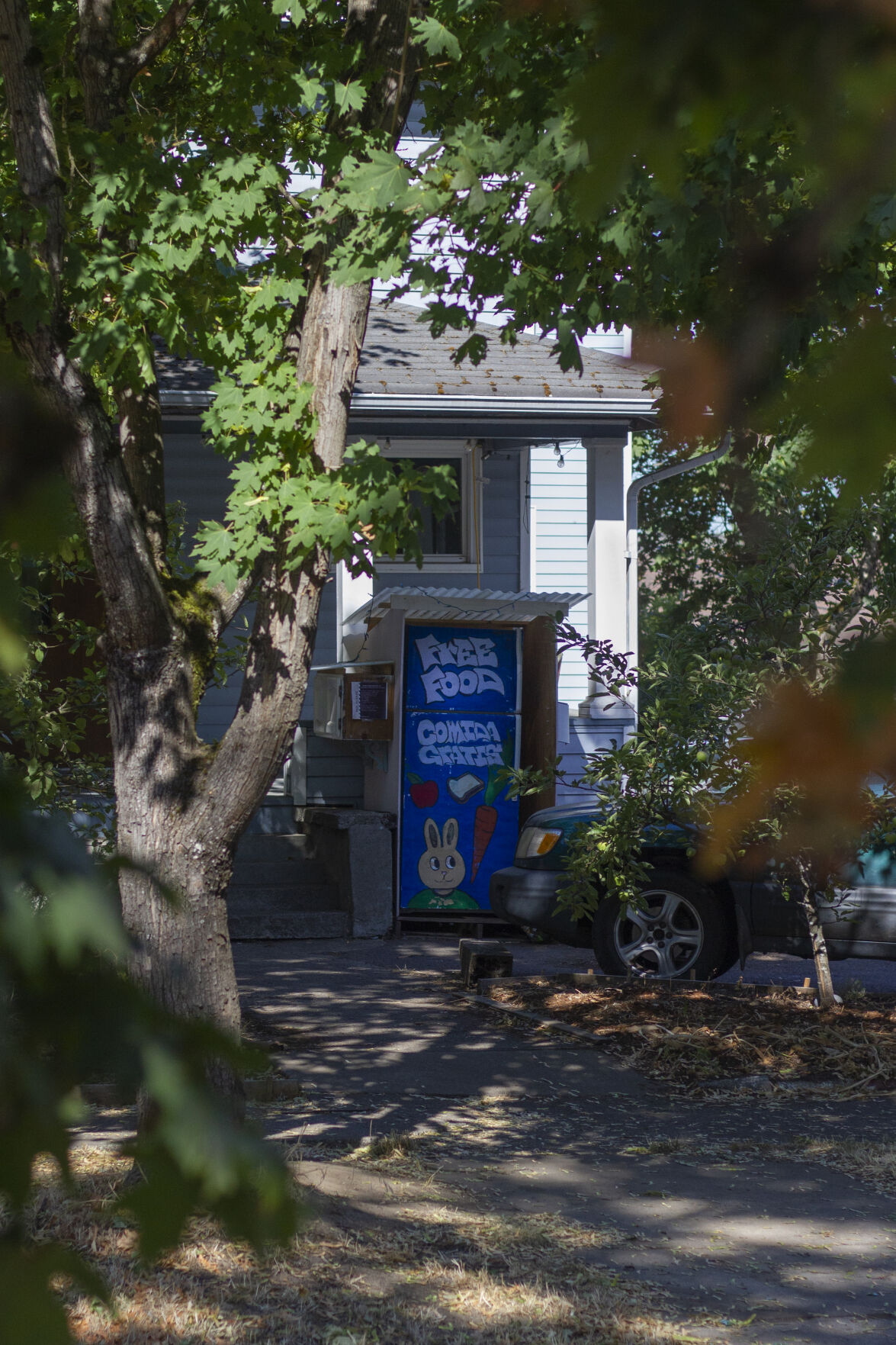 On the corner of 18th and Alder sits a community fridge. The fridge was placed there in October 2020 by Eugene Community Fridges. Now, the fridge is filled weekly by volunteers with free and accessible food for anyone to take at any time.

In May 2021, Eugene resident Jayme Bradshaw lived under Washington-Jefferson Street in the Whiteaker neighborhood in Eugene. She lived in a tent, located on the eastmost side of the strip of park, right across the street from a free community fridge.

Just a short walk away from Washington-Jefferson Park, the fridge was easily accessible to Bradshaw and other nearby residents. The fridge, painted an orange-pink hue with multicolored rainbow squiggles, had "free food" and "comida gratis" painted in big white letters on the front. Inside, the fridge contained perishable food and other necessities free for the taking.

Bradshaw is still currently affected by food insecurity. While she primarily uses food stamps to pay for food, Bradshaw also used the free community fridge across from her camp once or twice a week to grab things like hotdogs, pizzas and salads. But now the fridge is gone.

Bradshaw has nerve damage, so it’s important for her to be close to food resources.  Other free meal programs, like the FOOD For Lane County Dining Room, which is about half a mile from Bradshaw's camp, can be difficult for her to access.

“Walking long distances is not a thing for me," Bradshaw says. "If I don't have my bike, I can't go anywhere.”

According to the Oregon Food Bank, there were around 66,750 food-insecure people in Lane County in 2020. Eugene Community Fridge, a new organization in Eugene, provides access to perishable goods, premade meals and fresh produce through neighborhood fridges available around Eugene.

Unlike other neighborhood free food locations in Eugene, the organization's fridges can sustain frozen and other perishable foods. Refrigerators allow people who experience food insecurity to access a broader selection of fresh and healthy options. Other donations, such as toiletries, cleaning supplies and gently used clothing, are also accepted by Eugene Community Fridge.

Before Eugene Community Fridge, there weren't any well-known locations in Eugene where individuals could access fresh and frozen food 24 hours a day with no questions asked.

Burrito Brigade receives much of its food through its Waste to Taste program, collaborating with local grocery stores, bakeries, restaurants, and farms that give it imperfect food.

Lane County's website says the county throws out 91 million pounds of food waste each year. But through the Waste to Taste program, food is sent to the pantries around Eugene rather than landfills. Eugene Community Fridge volunteers visit Burrito Brigade to pick up food from Waste to Taste five days a week.

"Food is a human right, and I think it's important to understand that there is so much food waste out there," Ormsten says. "Being able to redistribute food that would normally go to waste and provide it to folks who have restricted access to food — it's just important to be involved in that process."

Eugene Community Fridge set up its first fridge in September 2020 at West 4th Avenue and Washington Street, right across the street from where Bradshaw would live a few months later.

In October 2020, the organization set up a second fridge just outside the Janet-Smith house, a student cooperative for graduate students and non-traditional undergraduate students, at the busy intersection of 18th Avenue and Alder Street.

KW Lau, who lives at the Janet-Smith house, says the decision to host the fridge was a unanimous agreement among the residents and is an easy way to give back to the community.

Lau says she hopes the fridge is helpful to university students. Located in the middle of a university town, Lau says, many of their neighbors are students, and many of them are food-insecure.

According to the University of Oregon's Food Security Task Force, 36% of all enrolled students experience some level of food insecurity.

To combat food insecurity among UO students, the University of Oregon's Student Sustainability Center hosts Produce Drop at the Erb Memorial Union Amphitheatre on campus, where students can select fresh fruits and vegetables to take home for free. According to the Student Sustainability Center's website page on food security, Produce Drops happen every Tuesday from 3 p.m. to 5 p.m. A student's household income must be at or below twice the Federal Poverty Level to be eligible for the Produce Drop.

The UO also hosts a food pantry. According to the Student Food Pantry Facebook page, on Wednesdays and Thursdays from 4 p.m. to 6 p.m. during the university's academic terms, students can get free canned and non-perishable foods. To use the food pantry, students must have their university ID.

Unlike the UO's Produce Drop and Student Food Pantry, the free fridge outside the Janet-Smith house is open and accessible 24 hours a day, every day, including holidays. Lau says that it's also unnecessary to show any ID or proof of need, which could be a barrier that people face with other resources.

"The fridge is a less intimidating idea to access," Lau says. "Hopefully, we can reach out to the students here who need the food and can discreetly get it."

According to Eugene Community Fridge, one of the organization's biggest struggles is finding hosts for fridges. Homeowners and businesses are often hesitant to host fridges out of fear of loitering, vandalism and property destruction.

In April 2021, Eugene Community Fridge announced on its Instagram page that it would be taking down the free community fridge next to Bradshaw's camp at the corner of West 4th Avenue and Washington Street. According to Eugene Community Fridge, the host of the fridge could no longer accommodate it due to complaints from neighbors about litter and noise as a result of heavy foot traffic in and around the fridge location.

A few days before the fridge near her camp was taken down, Bradshaw says she didn't know it was being removed, and its absence would significantly impact how she and other people in her camp accessed food.

"So many people here, they don't have income," Bradshaw says. "I'm one of them, but I get food stamps. So, if it wasn't for things like that, they might not eat."

The fridge near Bradshaw's camp was taken down in May 2021 — a month after the Instagram announcement. Since then, Eugene Community Fridge has not found a new host to accommodate the fridge.

The organization has reached out to many of the businesses and churches near Washington-Jefferson Park but has been unsuccessful in recruiting a new host. Eugene Community Fridge worries that stigmas surrounding people experiencing homelessness may be contributing to apprehension about hosting a fridge.

"What we really need is to educate folks on the importance of this kind of resource," a volunteer from Eugene Community Fridge, who asked to remain anonymous, says. "If you show love for people, and compassion, and show up for people, we would see more of a mutual respect between housed and unhoused folks."

With the absence of a free fridge near Washington-Jefferson Park, Eugene Community Fridge says, volunteers still show up for Bradshaw and other individuals experiencing food insecurity to distribute food on foot five days a week, Monday through Friday.

"When you ain't got food over here, it's nice that somebody actually cares to provide that," Bradshaw says.

In the future, Eugene Community Fridge plans to install more free fridges around Eugene and Springfield. With a fridge for every neighborhood, the organization hopes more individuals will be encouraged to both donate to and take from the fridges, preventing more food waste from entering landfills and ensuring more food insecure people can access fresh and healthy food.