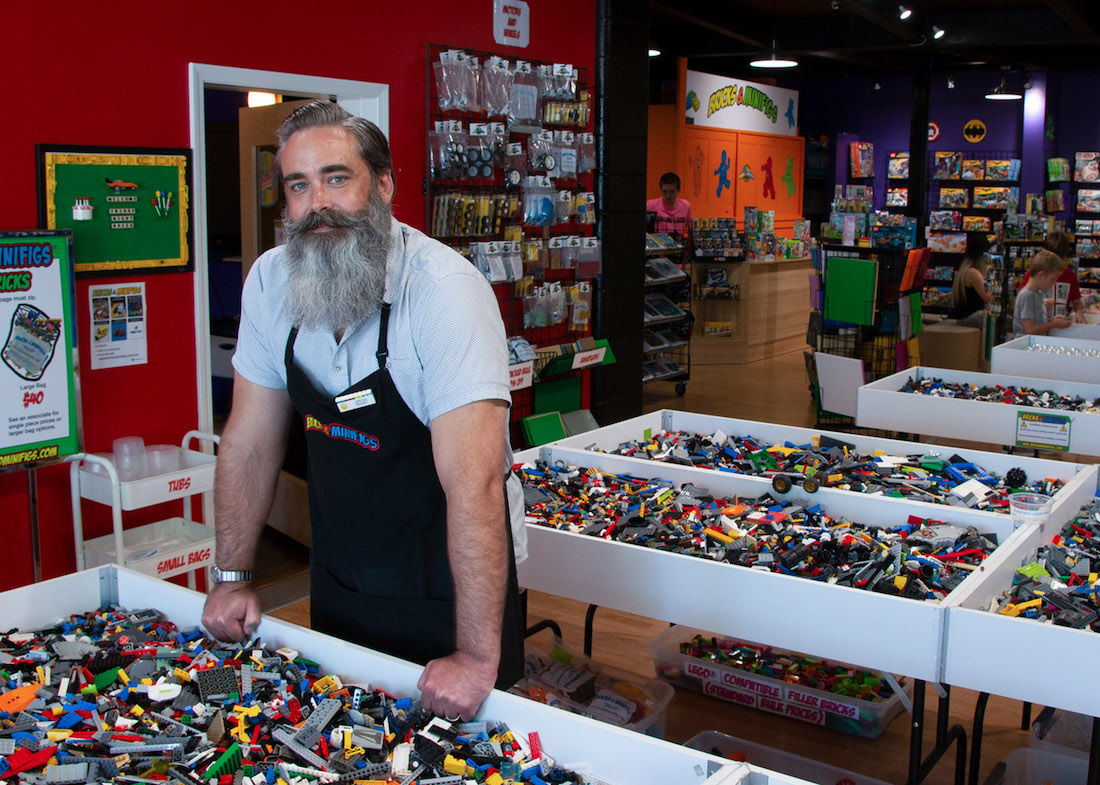 Christopher Wright, manager at Bricks and Minifigs in Eugene, OR. Wright provides opportunities for creative exploration regardless of age, and pushes the boundaries of LEGO by looking innovative ways to engage the community in brick crafting. (Robin FitzClemen/Emerald) 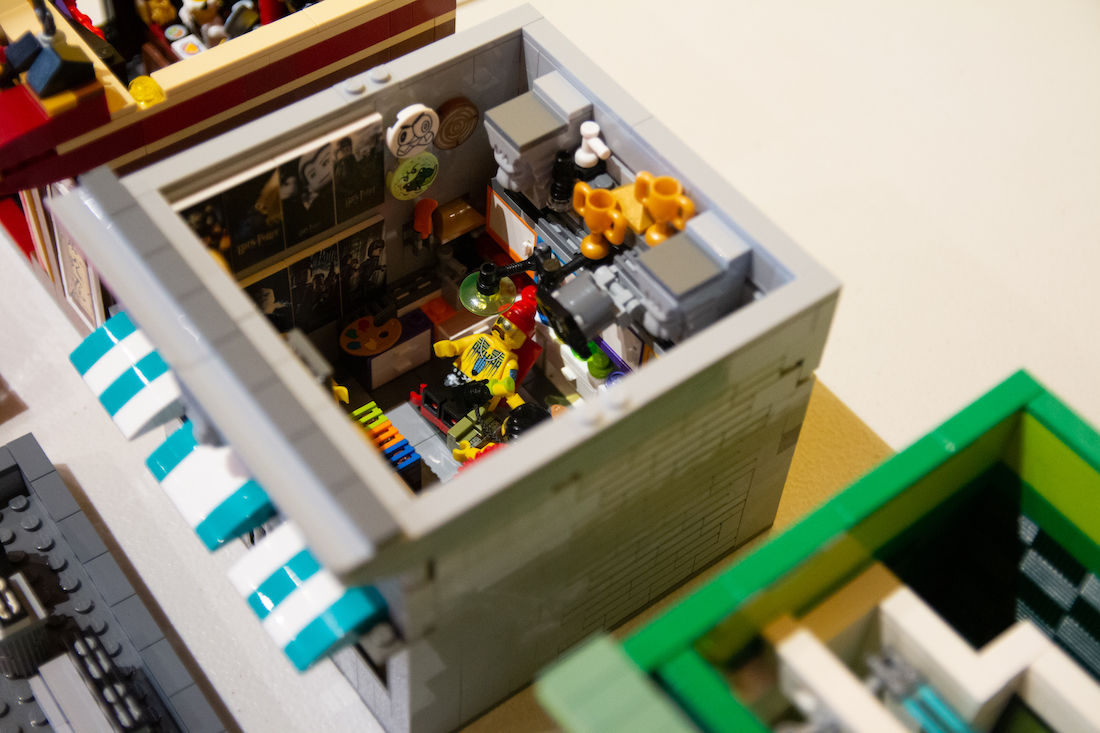 At Bricks and Minifigs in Eugene’s Whiteaker neighborhood, LEGO fans of all ages are working to disassemble the idea that adults shouldn’t play and to explore the creative opportunities of what was once considered a child’s toy.

Christopher Wright is the manager of Bricks and Minifigs. To supplement his income as a graphic designer, he took a position as the weekend manager after building LEGOs with his son reignited his interest in the hobby. When his studio was burgled and his business effectively ruined, Wright left graphic design to be the store’s full time manager.

The Emerald sat down with Wright at Bricks and Minfigs and he shared why he is so passionate about his work.

This interview has been lightly edited for clarity.

A: I don’t really think of myself as a sales manager. I just talk to people and pretty much give people permission to play with LEGOs that wouldn’t normally. There is still a stigma sometimes around adults playing with LEGOs. I tell them that “it's okay, you can play with LEGOs, it is now a no-ages thing.” I have entire families that come in and dad has his things that he builds, mom has her things and the kids have their things. Or sometimes I get adults that are by themselves. I kind of give them permission and by removing some of those stigmas tell them it's socially acceptable now. But also I just try to inspire people, try to get them to play more and to tell them that it's actually good for them, and find ways to engage the community.

Q: Where did it all start for you personally?

A: I was playing with LEGO as a kid, you know we all do. Probably around thirteen or fourteen years old I kinda grew out of it. Most AFOLs, which is Adult Fan Of LEGO, go through a dark period where they stop playing. They usually pick it up somewhere in their mid twenties to mid thirties again. Usually it’s in connection with the birth of a child, which is the same for me. My son was born and I pulled my old LEGOs out. It was one of the only things I kept from my own childhood. I started playing with him and I was like, “why did I ever stop? This is really fun and relaxing.”

Q: When you get hands on with LEGOs what do you build?

A: All kinds of stuff. For years LEGO did not want to have anything to do with adults. Probably a decade ago, they finally realized that one, they couldn't fight it because there was just too many. They kinda realized they [adults] are the ones that are building these epic, epic things that are inspiring the kids. They do these Creator Expert [sets]. They make what they call the modular series which are three- or four-story buildings, but they are super detailed inside and out. They are absolutely amazing and several thousand pieces. I'm really into those quite a bit. Occasionally I’ll get into more artistic things, feeding back to my graphic design background doing pixel art, where instead of doing dots of paint, you’re doing little tiny LEGO pieces for your colors. I find that to be pretty rewarding as well.

Q: Can you describe the store a bit more for me?

A: Unlike places like the Targets, Walmarts and those kinds of stores that just sell new sets, we do have new-in-box sets, but we also have used sets that people will bring in. They will either trade them for store credit or they will just sell them to us. We will go ahead and clean them up and put them back on the shelf. Everyone has that giant rubbermaid tote of LEGOs sitting in their house. They can just bring it in and we’ll buy it. Then we put it out on the tables and everyone can go through and look for those individual pieces for those sets they're trying to complete. Or maybe its a personal build and they're like, “oh I need twenty-three red bricks of this size and color.” They go through the tables, pick them out pay for them by volume or by the piece.

Q: You talked a bit about social stigmas keeping people from getting involved. Tell me more about why you think that is?

A: I think a lot of it was that it’s in the toy section. For a lot of adults that don't have kids, they feel almost creepish hanging out in the toy section of Target. That adds to the stigma. Also, for years there wasn't an adult market. It has evolved but there are still a lot of people who didn't grow up with it being that idea.

I think my oldest builder that comes in regularly, he's gotta be in his eighties. He's a retired motorcycle mechanic, never played with LEGO as a kid or anything... Once he retired, he said that his mind and his hands were going to mush. His wife got him a LEGO set just for a joke, more or less, and he ended up loving it. Now he is in here at least two to three times a week and builds some of the most technically advanced stuff I have ever seen.

For some reason Generation X and younger generations have really embraced play as adults in a way that the baby boomers never did. … It’s a form of expression and they realize they can do it. Or like for my wife its a form of meditation. ... It calms her down and she doesn't have to make decisions or anything, she just follows the directions. Once you see other adults playing with it the stigma starts to lose traction. That's one of my big goals to just break that stigma down for everybody.

Q: Is there anything else you want to talk about?

A: It definitely has been a real game changer for me and I've seen it be a game changer for so many people. One of our AFOLs is a counsellor. The types of things she deals with is people with PTSD. People who are returning home from the war, that kind of thing. She says the problem is that they can’t get out of their own head. She will give them huge LEGO sets and have them build it. It gives them a distraction, it allows them to focus on something else. If they have an outburst, or something like that, and they throw it against the wall and it breaks into a thousand pieces, then it becomes a metaphor. You pick up the pieces and you build it again.

My stepfather had [a] stroke about a year ago. The occupational therapist found out I work here and she is like, “Get him LEGO, it will help get his hand back and it will help heal his brain.” Sure enough it's happening. Right now we are trying to coordinate with memory care facilities because we found that there are some studies out there that show that for the elderly playing with LEGO offsets dementia and alzheimers. We are trying to hook up with some of these memory care facilities to go there once a week, bring a bunch of LEGOs and let them see if it helps them out.

Q: What do you want to see in the future for you personally, what do you hope for?

A: To continue bringing in more of the community. To see it become more of a family thing. It’s becoming a family activity that doesn't involve a tv screen or a computer or anything else. It's just the families getting together, building together, and being creative together. Especially since LEGO works with so many different types of brains. Whether it's somebody who's on the autism spectrum where to them the idea of a system really makes sense and it calms them. Then you have other people that are on the ADHD spectrum and to them it's the creativity that they can work with in the system to create whatever they want. Or just neurotypical brains that enjoy it. Even if you have family members who all think a little differently they can all find something within LEGO that can bring them together.