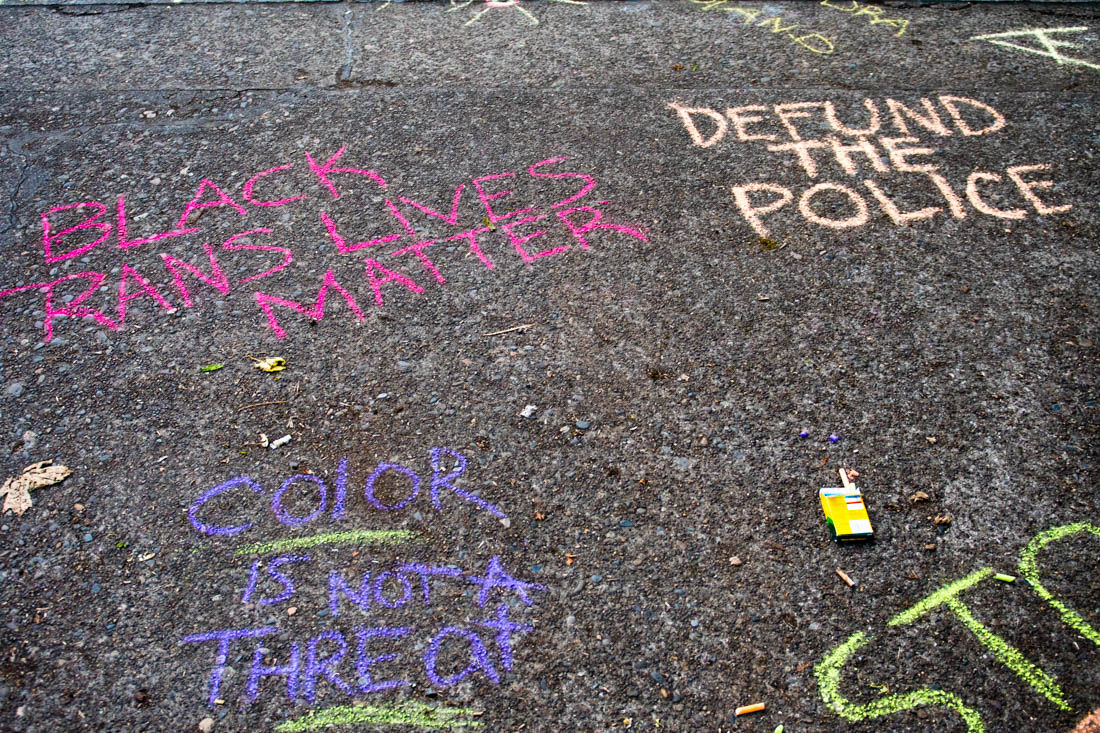 Participants write in chalk on the sidewalk in front of the vigil. The Black, Indigenous and People of Color (BIPOC) Project leads a vigil for lives lost to police violence in Eugene, Ore. on June 1, 2020. (Madi Mather/Emerald) 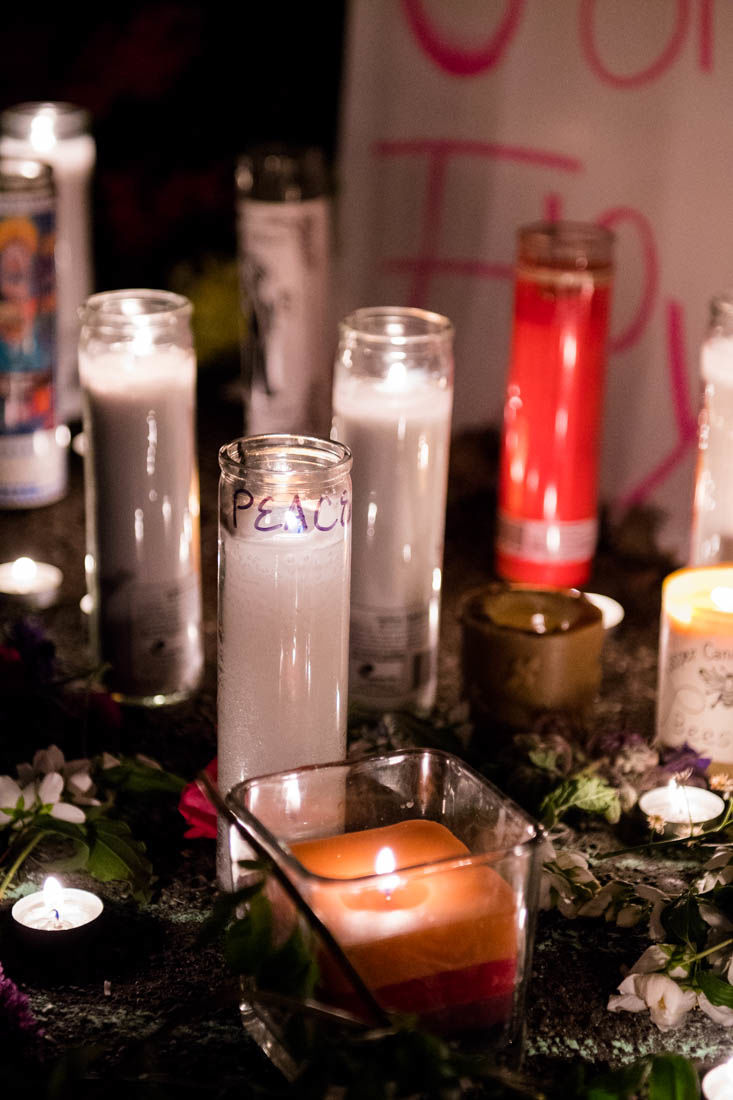 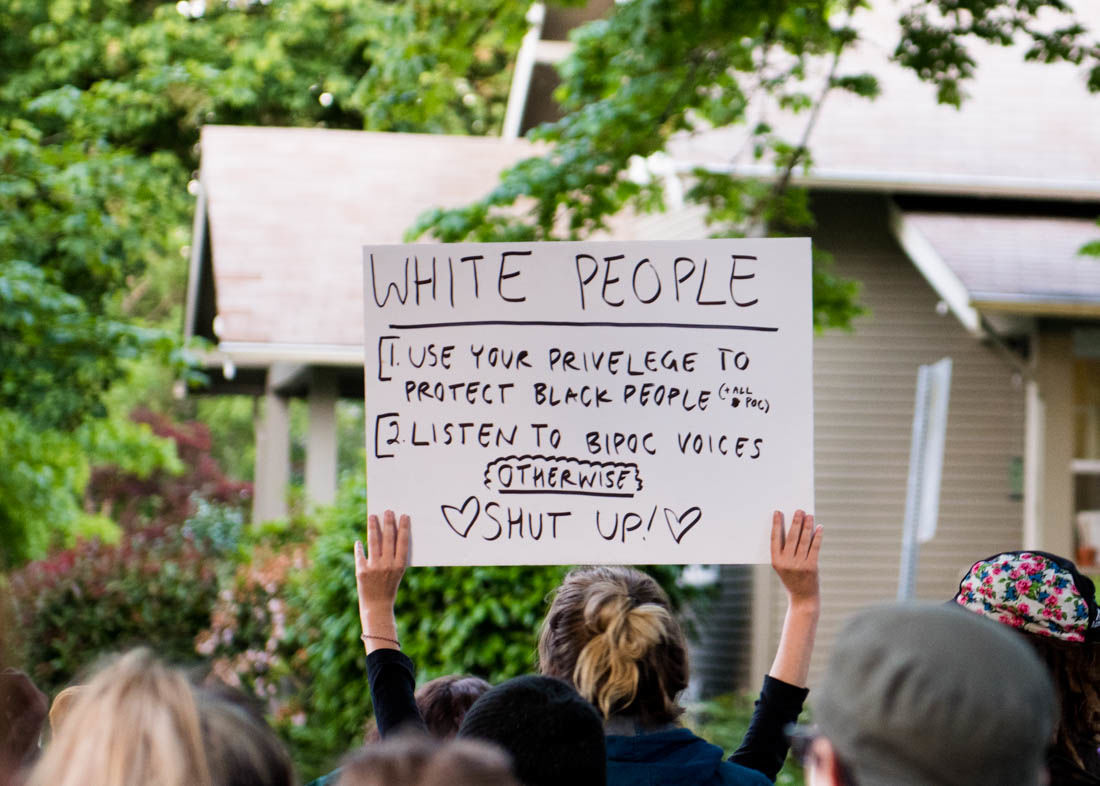 An attendee holds a sign above the crowd. The Black, Indigenous and People of Color (BIPOC) Project leads a vigil for lives lost to police violence in Eugene, Ore. on June 1, 2020. (Madi Mather/Emerald) 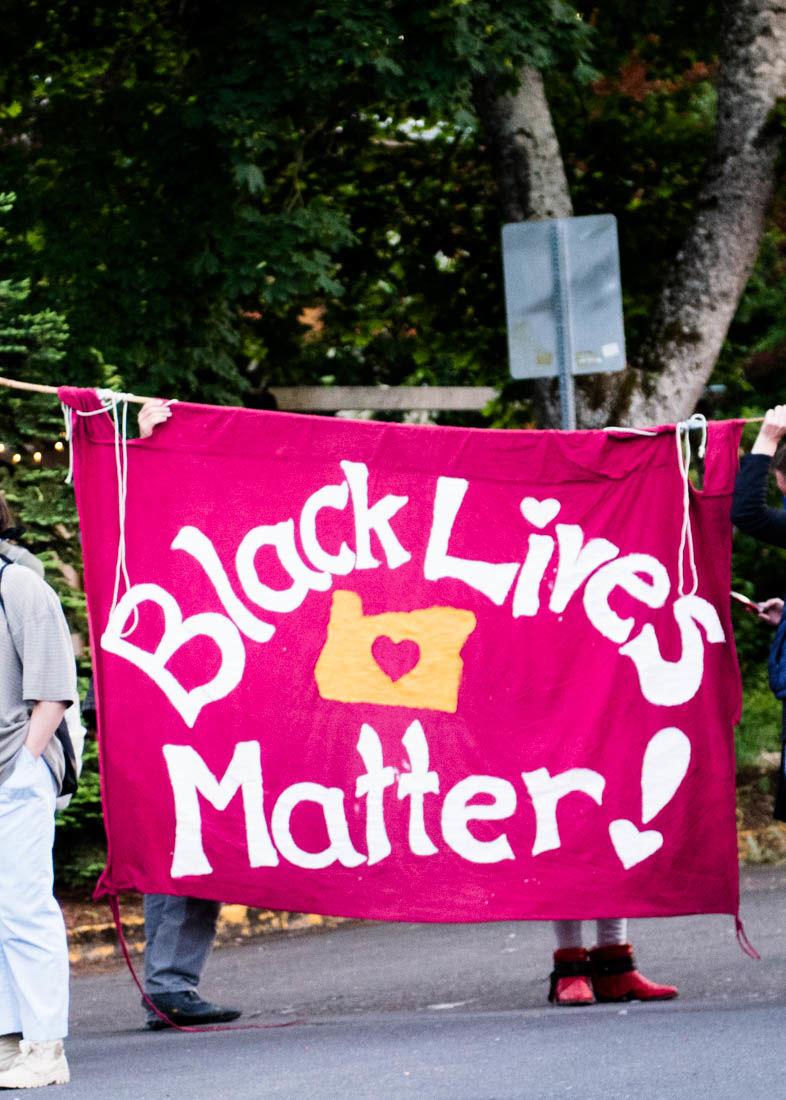 A Black Lives Matter sign is held on the street of the vigil. The Black, Indigenous and People of Color (BIPOC) Project leads a vigil for lives lost to police violence in Eugene, Ore. on June 1, 2020. (Madi Mather/Emerald)

Demonstrations against the police killing of George Floyd and the systems of policing leading up to his death continued peacefully in Eugene Monday. After a vigil near Monroe Park, protestors walked through city streets, careful to avoid interactions with police following the announcement of curfew orders.

The evening began with a vigil to mourn the lives of Black, Indigenous and People of Color killed by police. Around 60 people sat in a group — almost all socially distanced — while speakers stepped to the center to share their thoughts.

“Make sure that when this movement starts to die out, that we don't let it,” said one speaker. “We're probably not going to benefit from it, but you know who will? The kids.”

Others shared personal stories of loss, harassment and racial profiling. Others spoke about living in an economic class system that disproportionately harms BIPOC.

A small “altar” of candles burned all night along the curb, positioned next to signs reading “Rest in Power! Justice for George Floyd!” and “Stop police brutality.” The street below the group was covered in chalk messages, including “Defund the police,” “ACAB” and “Black trans lives matter.”

The demonstration came as the next in a series of reactions to the police killing George Floyd in Minneapolis last week. A video shows police officer Derek Chauvin  — who’s since been charged with third-degree murder — kneeling on the Floyd’s neck for several minutes while he pleads for help.

The killing was the latest example of Black individuals being killed by police or white vigilanties, including Ahmaud Arbery in Georgia and Breonna Taylor in Kentucky.

According to one protester at the march later in the night, the vigil began organically from people in the neighborhood, and people started showing up.

Intersections on either end of the block were blocked by protesters with signs. They waved to cars as they drove by, and many honked in response.

Partway through the event, A man walked by the vigil and began to shout, “All lives matter,” from across the street. Many of the attendees moved to the end of the block and began chanting, “Black lives matter.”

Eugene Police Chief Chris Skinner drove up in front of the man and spoke with him briefly, and the man walked away. After speaking to a protester, Skinner drove away, and the vigil’s attendees stopped chanting and applauded before rejoining the circle.

Skinner spoke with individuals on the outskirts on several occasions but wasn’t invited to enter the block or join the circle. Wearing casual police clothes and in a non-police vehicle, Skinner had come without clear evidence of the militarized police that the city had seen for the past three days.

Skinner declined to be interviewed at the time, instead referring the Emerald to a department spokesperson.

Midway through the event, the City of Eugene announced a downtown curfew for the third night in a row, this one to start at 10 p.m. While the event was held outside the boundary of the previous nights’ downtown curfews, Monday’s impacted area was expanded to include it.

After a short discussion, the group decided to formally end the event prior to the curfew — but “you can do whatever the fuck you want,” organizers told the crowd.

Throughout the rest of the night, a group of protesters snaked through downtown and south Eugene, careful to avoid the area impacted by the curfew order. Nearly the whole time, the group chanted phrases now common in cities across the world: “Black lives matter!” “No justice, no peace, no racist police!” “Say his name: George Floyd!”

At one point the group was met by police at the edge of the curfew boundary. About a half a block south of officers in riot gear, most of the crowd — then about 100 people — kneeled and put their hands up.

“Hands up! Don’t shoot!” they called.

“You are obstructing vehicular traffic on a public way. This is a lawful command to disperse immediately,” a police loudspeaker responded. “Failure to comply with this lawful order may result in your arrest.”

Most of the cars in the area at that time were in support of the protesters (aside from the half-dozen or more police cars and SWAT vehicles). One van, labeled “white ally,” handed out water to protesters and temporarily blocked traffic as the group crossed streets.

The group eventually stood and walked away from the police blockade and, as the night continued, protesters kept to the sidewalk to avoid blocking traffic.

Students in apartments and houses near campus joined the effort as the group wandered through, many joining in the chants from porches and some stepping down to march along. At its furthest point, the group reached the intersection of 19th Street and Patterson Street.

At the same time, around 11 p.m., the city extended the curfew to apply city-wide starting at midnight. While the city said that action would only be taken “if illegal and unsafe behaviors extend beyond the designated area,” it did not specify in the announcement what illegal or unsafe behaviors the extension was targeted at.

A police department press release mentioned that protesters had blocked streets, but didn’t specify how that necessitated the order applying city-wide. The city didn’t respond to a request for further clarification in time for publication.

“The group exhibited care in the way they were moving through the community and should be commended,” Skinner said in the release.

The group — continuing to remain on the sidewalk and refraining from damaging any property — headed back west in the direction it came. People filtered off as they passed their homes, and the core group of around 20 arrived at the Lane County Fairgrounds a few minutes before midnight.

“If you live in the opposite direction, go home,” called some, warning people to get home before the curfew took effect and indicating plans to continue the following day.

Organizers checked that everyone had a ride or escort home before parting ways. At midnight, fewer than a dozen remained and returned to the altar at Monroe Park.

There, the candles were still burning.

C. Francis O’Leary contributed to the reporting of this story.

Most speakers at Monday’s event asked not to be recorded or photographed due to the sensitivity of the topic and fear of police response. For that reason, the Emerald will not include names of protestors unless they consent or they have become public figures.

The City of Eugene responded to a request for comment shortly after this story was published. Their comment reiterated that the curfew was extended because streets were blocked outside the original curfew area, but didn’t clarify how that warranted extending the curfew to the entire city, given that protesters were peaceful and generally moved to the sidewalk when asked.

Black Lives Matter: A look at the past three weeks

Gina was a 2019-20 associate news editor for the Daily Emerald. She covered crime and courts and loves a public record. Send tips and pictures of puppies: gscalpone@dailyemerald.com