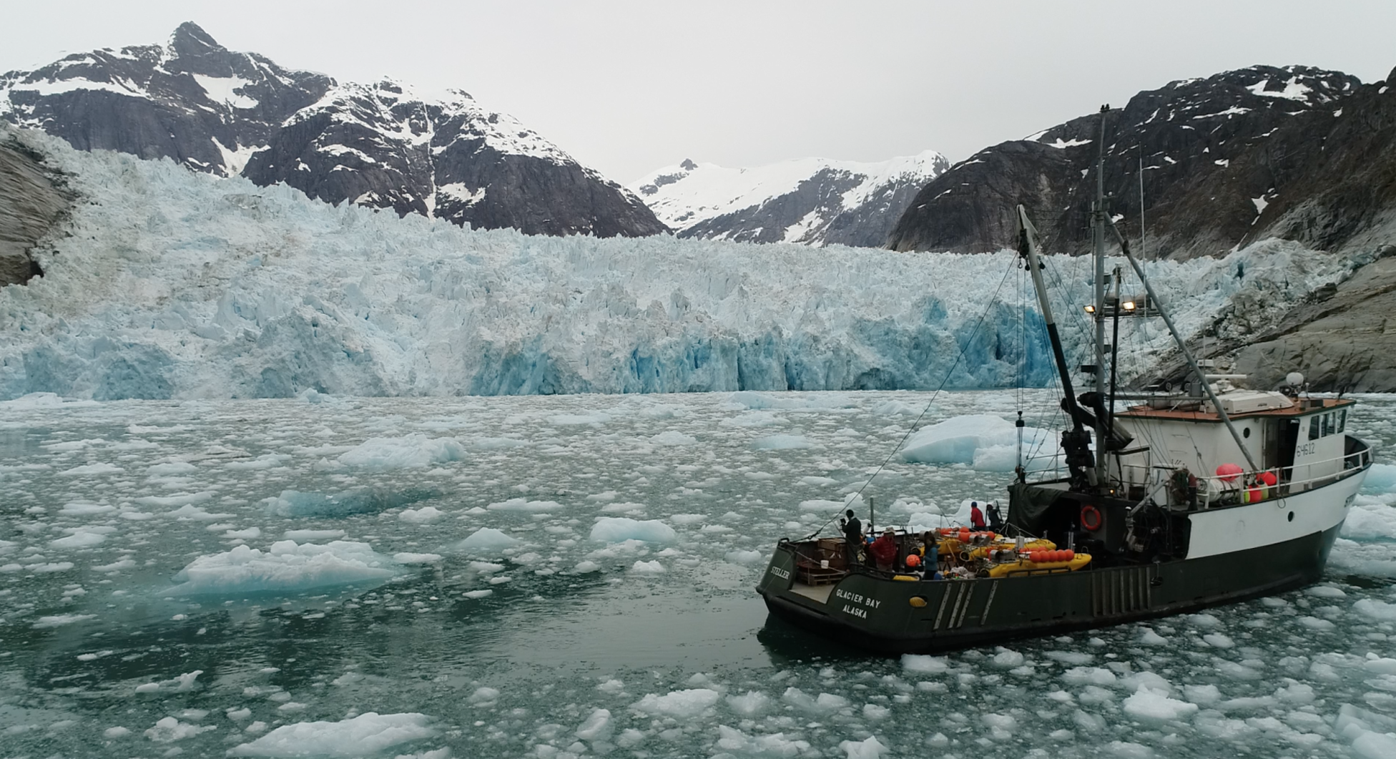 Though it was focused solely on one glacier, the study provides scientists around the world a newer framework on which to study tidewater glaciers and their melting processes. (Courtesy of Dave Sutherland) 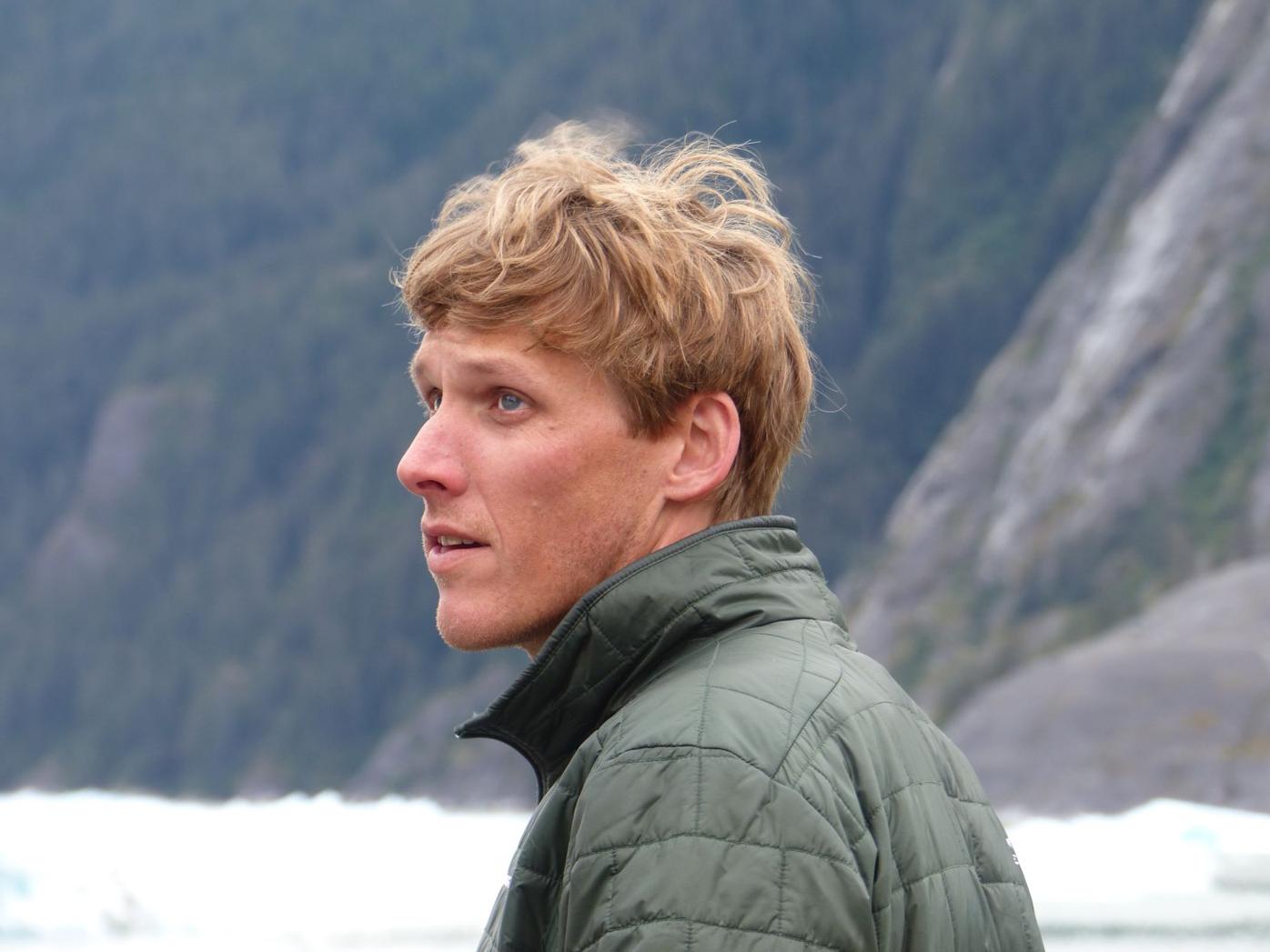 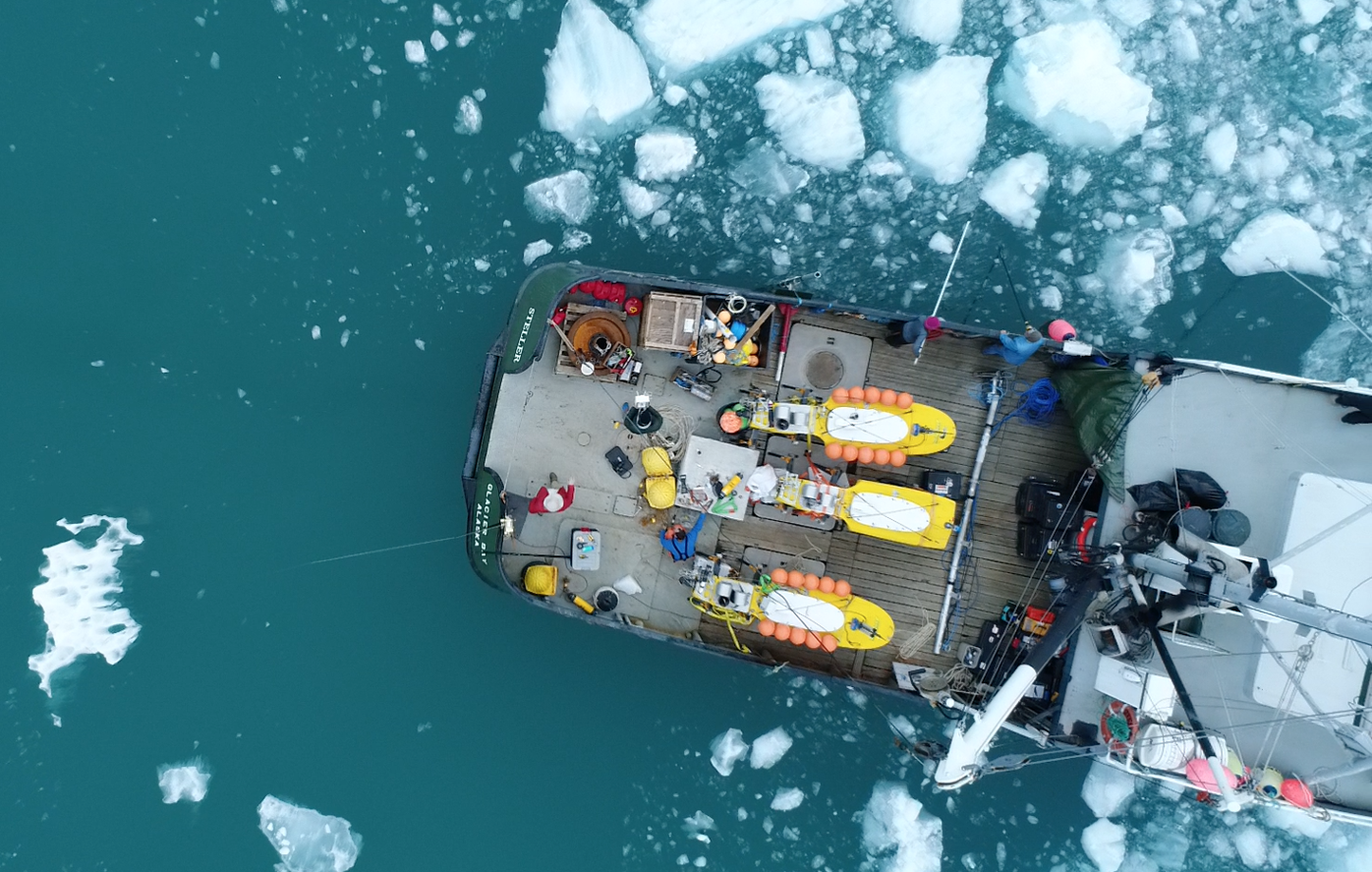 Due to the size of the boat and the clutter of technology, there was only enough space for half the crew to sleep at one time. (Courtesy of Dave Sutherland) 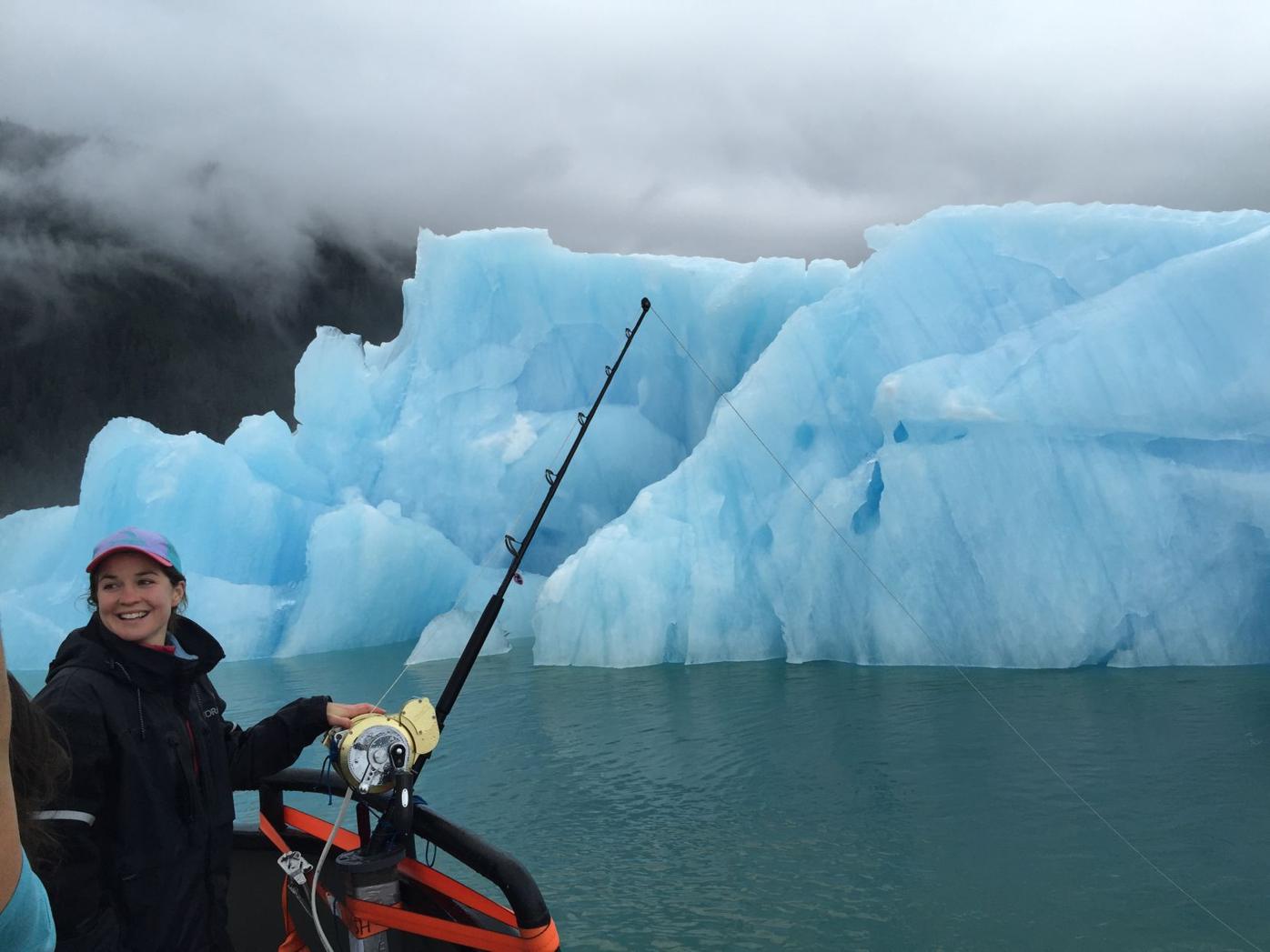 Somewhere, looming in the darkness, was LeConte Glacier.

The towering face of ice dwarfed a small fishing vessel — the Steller — that came from nearby Petersburg, Alaska. Aboard were 12 scientists and more than $500,000 worth of equipment.

Their goal was to understand how tidewater glaciers — glaciers that end in the ocean — melt underwater due to factors like warming ocean temperatures. The study, which was published in July, concluded the rate of melt is faster than previously thought — 100 times faster.

For days on end, they did nothing but gaze at LeConte, studying and documenting its every crack and crevice — an ominous, jagged landscape with scintillating shades of blue and white. But now, in the late evening, all that indicated its presence was the far-off crackling sound of shifting crevasses in the high wall of ice.

“It felt scary, for sure,” Dr. Dave Sutherland, a professor in oceanography from the University of Oregon and the study’s lead author, said.

It wasn’t uncommon for the crew to see large chunks of ice split off from the head of LeConte — a process called calving — and crash into the water. But every now and then, the calving could become dangerously large, placing the crew, the boat and the equipment at risk.

“You often see a calving event before you hear it,” Sutherland said. “So if a big one happened that night, we wouldn’t have had much warning.”

In that moment was an opportunity. The icebergs surrounding LeConte, once a barrier between the scientists and their subject, had dispersed. Now, all that was left to do was dangle expensive equipment off the side of the boat by a long metal pole, drive slowly parallel to LeConte and get a perfect picture. Using sonar signals from a device that typically measures ocean depth, the team created 3D images of LeConte’s underwater features and movements.

“Yeah, it worked, and we got good data,” Sutherland said, laughing. “But whether it was entirely worth the risk, I’m not really sure.”

Sutherland has lived and dived near coastlines for the majority of his life, giving him the soft gaze and curly hair of a surfer. He’s a tall man who’s developed a passion for studying the relationship between glaciers and the ocean. The walls of his office are adorned with photos and paintings from his various expeditions to remote glaciers in Greenland and Alaska.

“What has been important to me is doing something that I feel good about in a day-to-day job,” Sutherland said. “I like the idea of science — the idea of learning new things and pushing the boundaries and observing the world.”

For Sutherland and the team, the process of gathering data and imagery in the study was grueling. Day or night, through rain, sleet, wind and cold, the team worked 12-hour shifts for two weeks at a time during field expeditions in August 2016 and May 2017. And due to the size of the boat and the clutter of technology, there was only enough space for half the crew to sleep at one time.

The environment could also prove dangerous for the team’s expensive equipment. When larger calving events and patches of ice threatened the safety of the boat and crew, the captain, without much warning, would have to turn his boat around and flee, sometimes with equipment still near the water. Using metal poles, the team worked frantically to push away icebergs that could easily strip away their sonar device and send it plunging into the depths. In moments like these, tensions rose between the team and the captain.

“As scientists we’re always going to push a little bit to get more data,” Sutherland said. "But at that point, he’s making all his decisions without telling us because it’s his boat and that trumps everything else.”

Long hours and harsh conditions weren’t the only things that made the study tedious. So too was the process of gathering data. “We were surprised by two main things,” Sutherland said. “One was that the sonar actually worked.”

Getting a “full scan” of LeConte, or a full underwater image, required good conditions. Using  sonar, the team sent sound signals toward the glacier’s face. The signal bounced off the face and returned to the boat, creating an image that showed LeConte’s underwater features and movements.

It was a process that required timing, navigation skills and persistence. If anything got in the way — calved-off icebergs or larger patches of sea ice — then the signal would be no good. Only half of their attempts created full scans, Sutherland said. LeConte, an actively calving glacier, proved especially difficult in the study for this reason.

Another surprising aspect of the study, Sutherland said, was the amount of melt found across the entire face of LeConte. Originally, scientists relied on a leading theory when studying underwater melt. It said that warm plumes of fresh meltwater that rise up from rivers flowing beneath the glacier were the main cause of melt. However, with this study — the first direct measurements of melt ever gathered at a tidewater glacier — the team discovered melt rates to be high across the entire face, rather than just around the plumes.

“This was surprising,” Rebecca Jackson, an assistant professor of oceanography at Rutgers University, said. “But to some extent, we really didn’t know what to expect because nobody had tried this before.”

Using autonomous kayaks, Jackson helped the team collect data in areas that would otherwise be much too dangerous for the crew.

“What the kayaks then let us observe was that we could see all these intrusions of melt water coming off the glacier that contained a lot more melt water than we were expecting,” Jackson said.

Camped along a high ridge overlooking the valley, a separate, smaller team watched over time lapse cameras that captured the movement of the glacier and calved-off icebergs as it flowed into the ocean. Time lapse footage captured on the ridge was essential in calculating where, and how quickly, ice was peeling off from LeConte’s plumes and helped to judge ocean currents as well.

Theirs was a monotonous process, involving long days tending to equipment. “It’s kind of like hanging out at home and not doing anything all day,” Dr. Jason Amundson, an associate professor of geophysics from the University of Alaska Southeast, said.

But Amundson’s team also faced challenges of their own. By helicopter, they flew down to the glacier and set up seismometers — a device used to measure calving noise and water flowing beneath LeConte — which, for whatever reason, didn’t really work at all, Amundson said. Other devices ended up under 10 feet of snow, inside crevasses or malfunctioned due to the harsh weather conditions.

Despite its challenges, the team recognizes the importance of this study in developing the world’s understanding of glacial melt. Though the study was focused solely on one glacier, it provides scientists around the world with a newer framework on which to study tidewater glaciers. Understanding how tidewater glaciers melt will in turn help when calculating for sea level rise and predicting how the loss of ice sheets will affect ecosystems in the polar regions and around the world.

“Glaciers are causing sea level rise,” Jackson said, “and there’s hypotheses that ocean warming can trigger advance and retreat of glaciers. But that’s hard to test because we didn’t have direct measurements of submarine melting. Ultimately, we want to be able to predict in the future if the ocean warms by, say, one or two degrees, what’s going to be the response from glaciers to that warming.”

While Sutherland recognizes the severity of climate change, he sees his work on LeConte as a hopeful step towards showing how much is yet to be learned about the natural world.

“We’re still being surprised by science,” Sutherland said. “In the face of climate change and all the bad, depressing images out there of glaciers, wildfires, hurricanes, melting sea ice, we can still discover new things about our world. To me, this is hopeful and gives us a chance moving forward.”