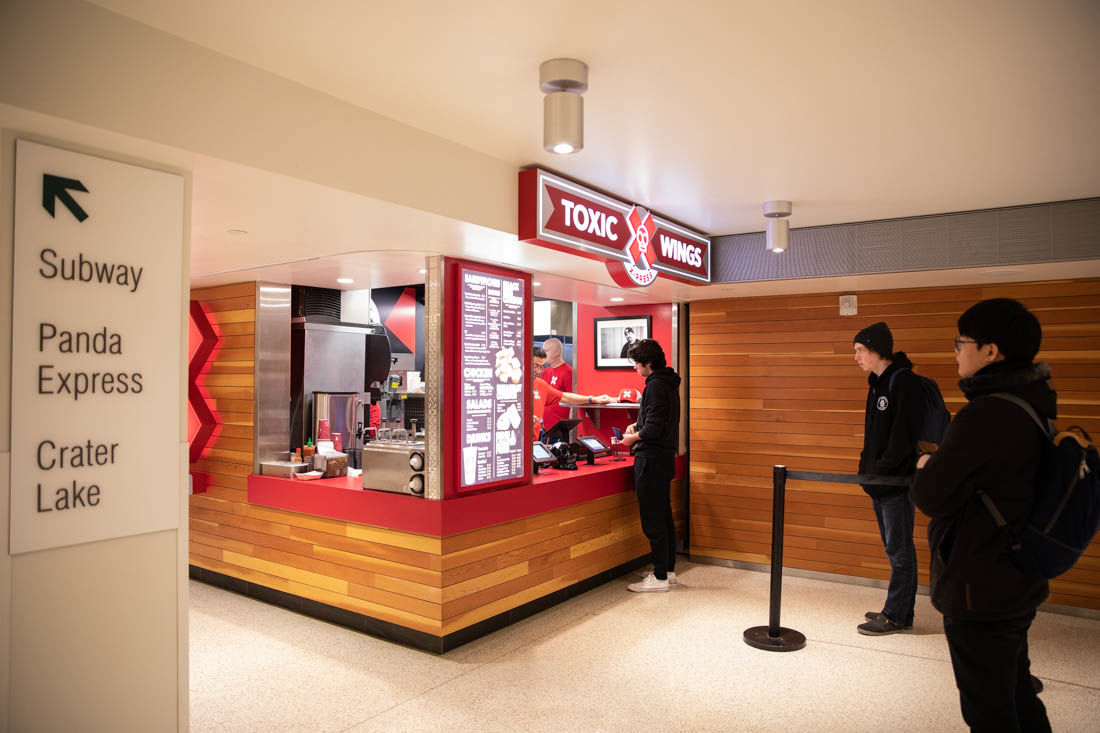 Customers wait in line to order for the newest spot on campus: "Toxic Wings." (Madelyn Stellingwerf/Emerald) 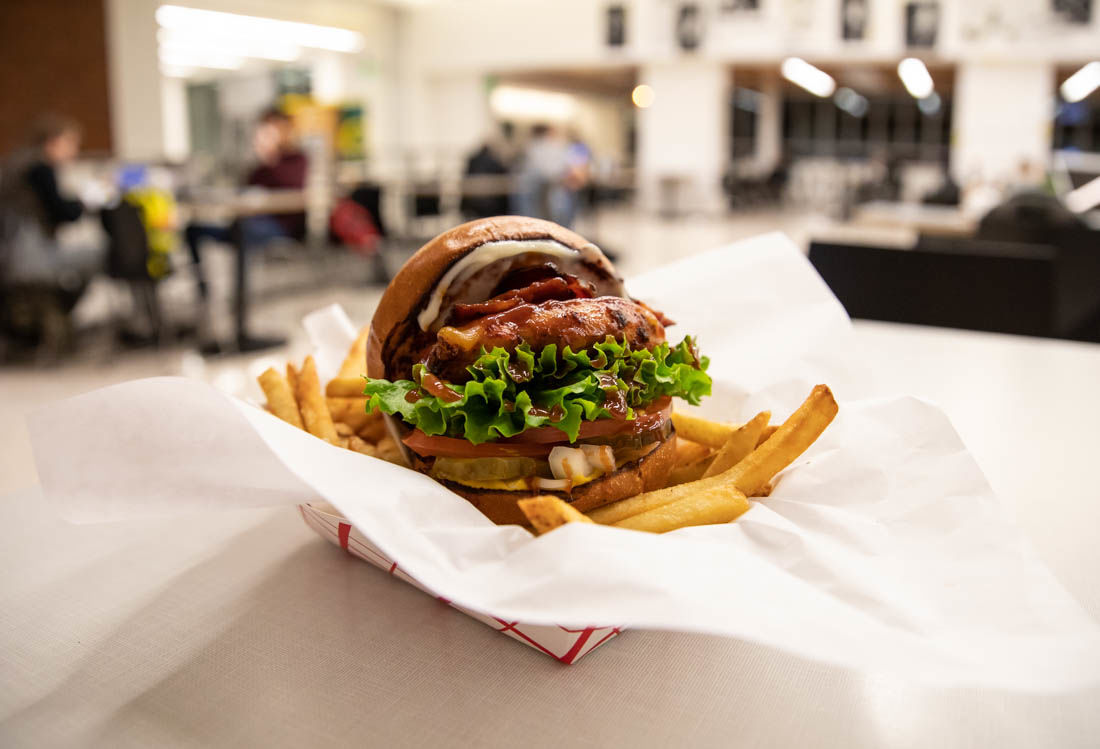 A up close look of the restaurants most popular item, the chicken sandwich. (Madelyn Stellingwerf/Emerald)

Slightly greasy but tangy and packing a spicy kick, Toxic Wings’ selections are of  decent value and a great toss-up amongst the other offerings of the EMU.

Compared to the other selections around the EMU, Toxic Wings is relatively inexpensive. The local chain is most well known for their chicken, from wings — which they offer in snack size combos and in orders of either 6 or 12 — to sandwiches, sliders, tenders and dippers. Additionally, the cooks are  quick with the turnaround between you ordering to whipping up your order and handing it to you.

Their chicken wings have a slightly greasy, crispy exterior instead of a thick breading, almost as if it was just skin that was slightly fried. They are not skimpy, small wings or drumsticks; they’re comparably larger than, say, Buffalo Wild Wing chicken wings. At 6 wings for $7 and 12 for $14, that’s a little over a dollar per wing, the portion should satisfy an average lunch-goer’s hunger.

Their wings are seasoned then smoked for an hour before getting fried. When the wings came out, they looked slightly seasoned but the taste was lacking. They were still nicely crisp and tender, but, thankfully, an order of wings does come with choice of their special sauces, plus sides of ranch and blue cheese sauce.

Offering a range of sauces from “safezone” (not spicy) to “RadioActive” (super spicy), even the cashier would not recommend the ‘Toxic’ sauce under the “DangerZone” category, since it combines different types of hot sauce and chili peppers, including some Ghost Pepper.

This range of sauces seems perfect for the daredevils who love food challenges, but for the average consumer, any sauce including and below "Frank’s Red Hot" on the list of sauces will be plenty satisfied by the accompaniment.

On the chance you don’t get wings, the sandwich selection is flexible for vegans, vegetarians and traditional omnivores alike. From variations of chicken sandwiches, BLT and pulled pork sandwiches, they also have an interesting veggie hemp burger.

The sandwiches are stamped with an ‘X’ on brioche buns and appear to be two-thirds the size of a traditional hamburger. The patty is surprisingly hearty and, despite its soft texture, holds up its integrity and unique profile despite all the fixings (in this case, mayo, mustard, lettuce, tomato, pickles and white onion).

The same can be said for the deluxe chicken sandwich. The chicken is only slightly crispy, but still a thick and hearty-enough piece that, when biting down none of the flavors washed its taste out. Although the sandwich looks small, when paired with fries, it makes for a decently sizable meal.

The fries were the most surprisingly satisfying menu item, since their thickness is between a steak cut fry and a typical skinny French fry. They were much less salty than former resident Joe’s Burgers’ fries, tossed with large salt crystals instead of standard salt.

The perfectly salted fries are the perfect base for the loaded fries, since their toppings can shine through instead of overwhelmed by salt. The pulled pork fries stood out; the pork was pulled into reasonably sized pieces rather than pulled completely apart, despite its tender texture. The BBQ sauce and coleslaw topped on top of the pork did not make the fries soggy. The coleslaw was pleasantly citrusy and light, which contrasted well with the pork’s heavy richness.

If you’re looking for a snack and to mix and match some of the options, the snack size combos are reasonable, but emphasis on the “snack size” label. For the amount of food you’re getting, the value is neither too little nor too much for the surprisingly high quality of their menu items.

In the case that none of those items seem appealing, the restaurant also has salads and breakfast combos. Breakfast combos are breakfast burritos that come with a house coffee, so the EMU finally has a hot breakfast option besides Starbucks.

It’s safe to say Toxic Wings is a surprisingly high quality EMU-space successor to Joe’s Burgers. Whether you’re looking for a quick bite with friends, a lunch after one Chipotle burrito or Subway sandwich too many, Toxic Wings has a pleasantly surprising menu selection that can cater to you and others with dietary restrictions on a decent budget.

Em loves writing about food and its connection to culture and other aspects of life. She is an aspiring food PR professional. When not writing for the Emerald, she manages her own blogs, "Sik Fan Mei, Ah?" about food and "Emi Chan Blog" about PR.