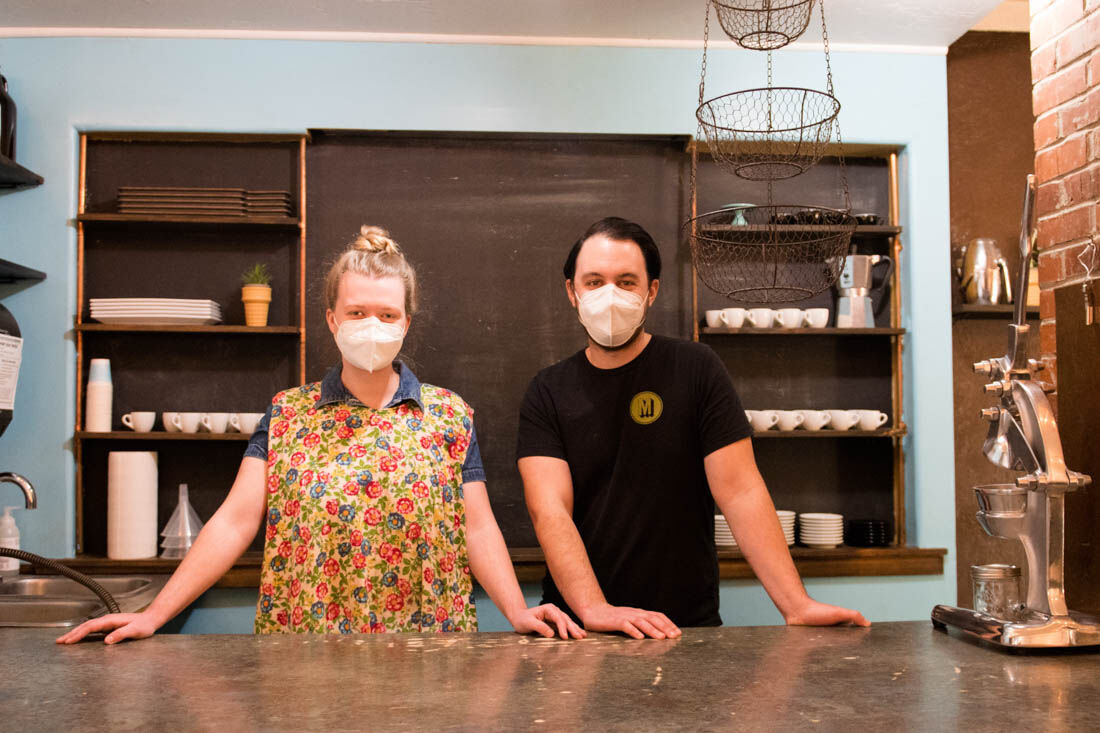 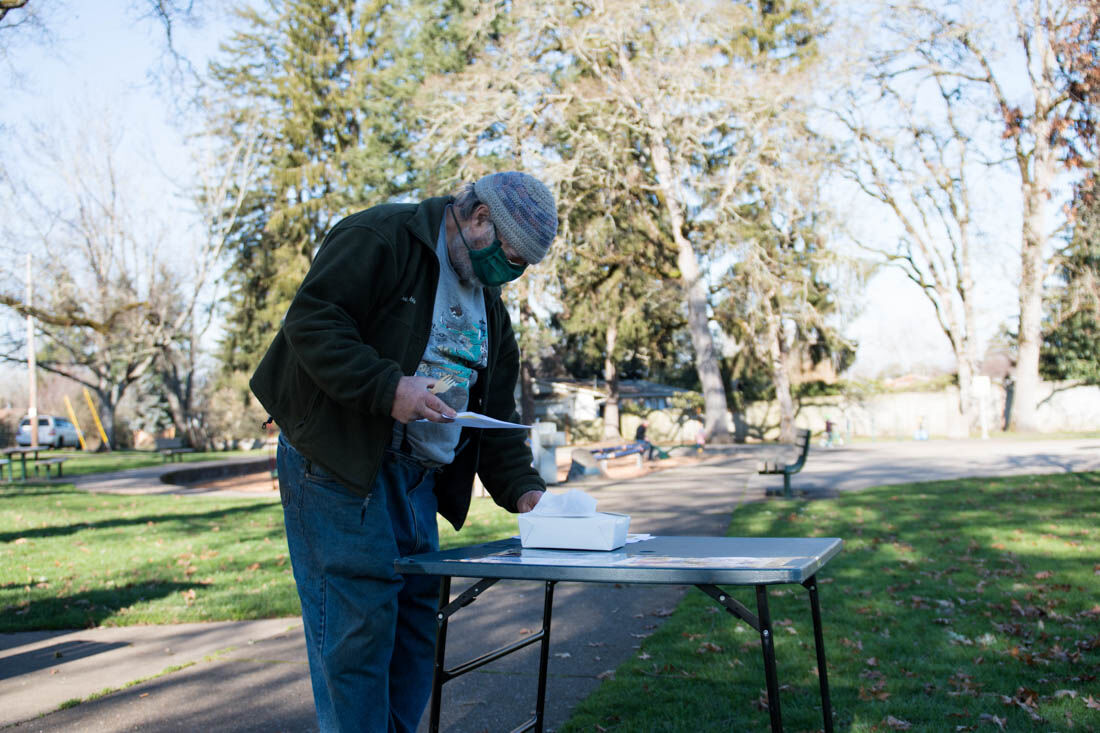 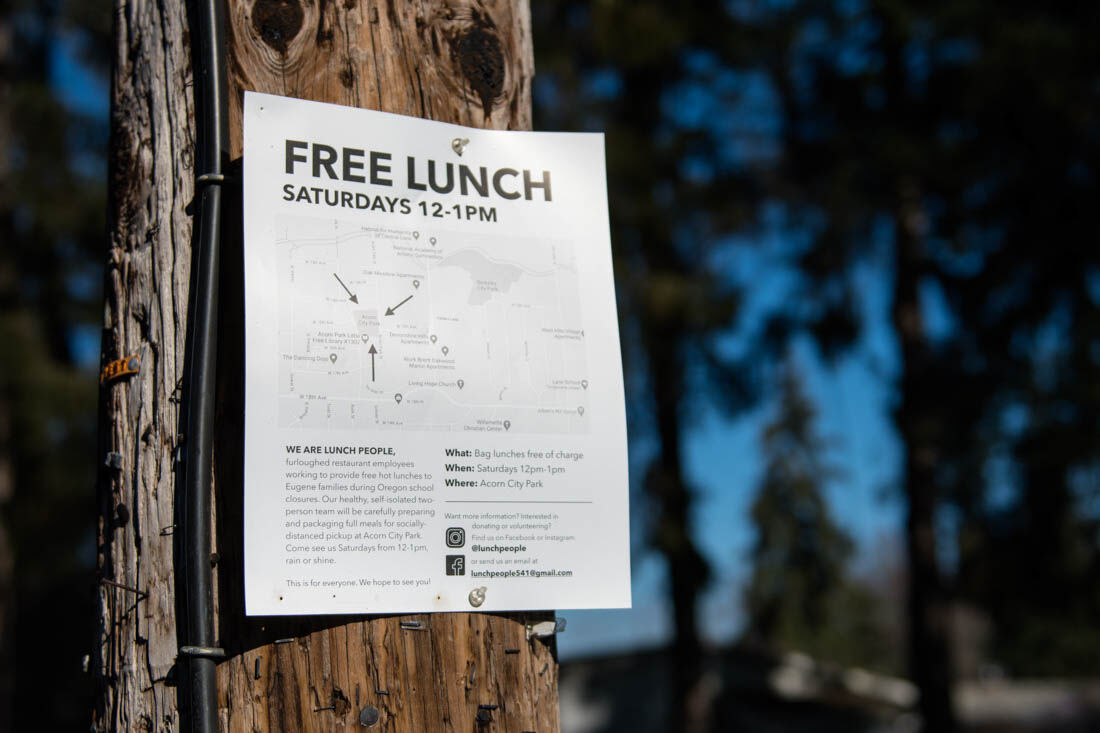 On Saturday afternoons Lunch People can be found serving free lunches for members of the Eugene community. Lunch People is a non-profit that provides free meals for families and community members in Eugene, Ore., Jan. 23, 2021. (Madi Mather/Emerald) 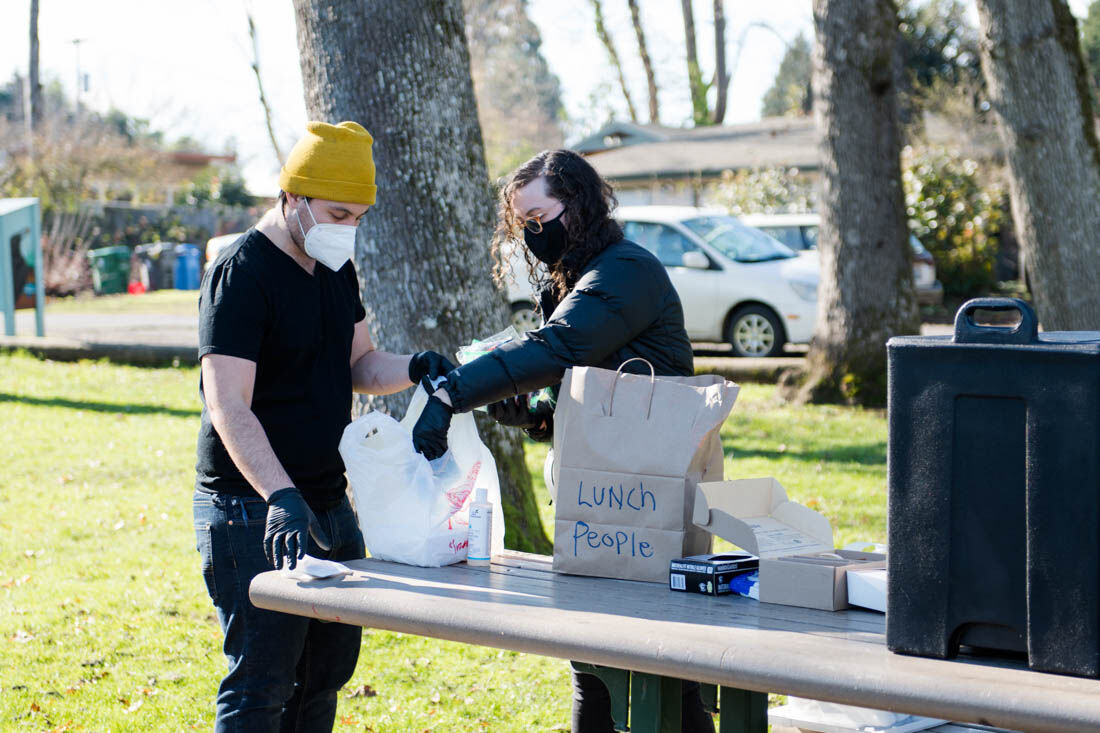 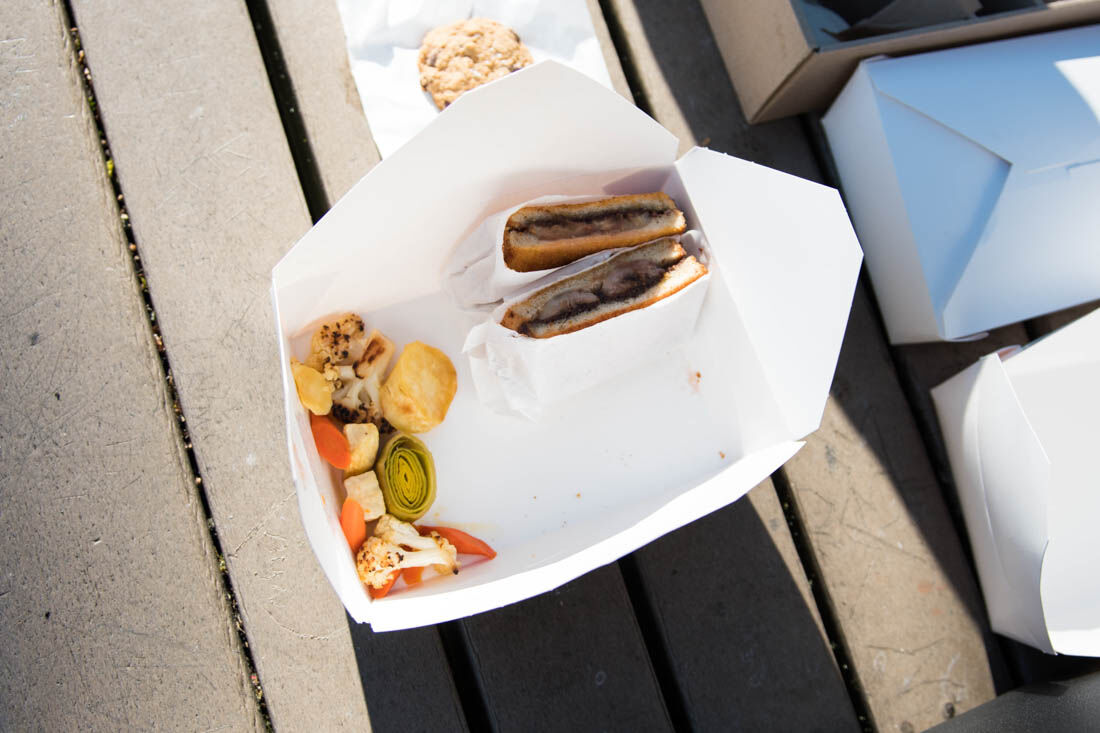 Lunch People experienced difficulty when first developing connections in Eugene, but their numbers rose quickly after engaging with the community. Corey Prunier shares that the unclaimed food was not wasted: “We took the food to homeless camps, it was always eaten.” Miranda McKeever and Corey Prunier, co-founders of Lunch People, plan to open their new location in the spring of 2021. Lunch People is a non-profit that provides free meals for families and community members in Eugene, Ore., Jan. 23, 2021. (Madi Mather/Emerald) 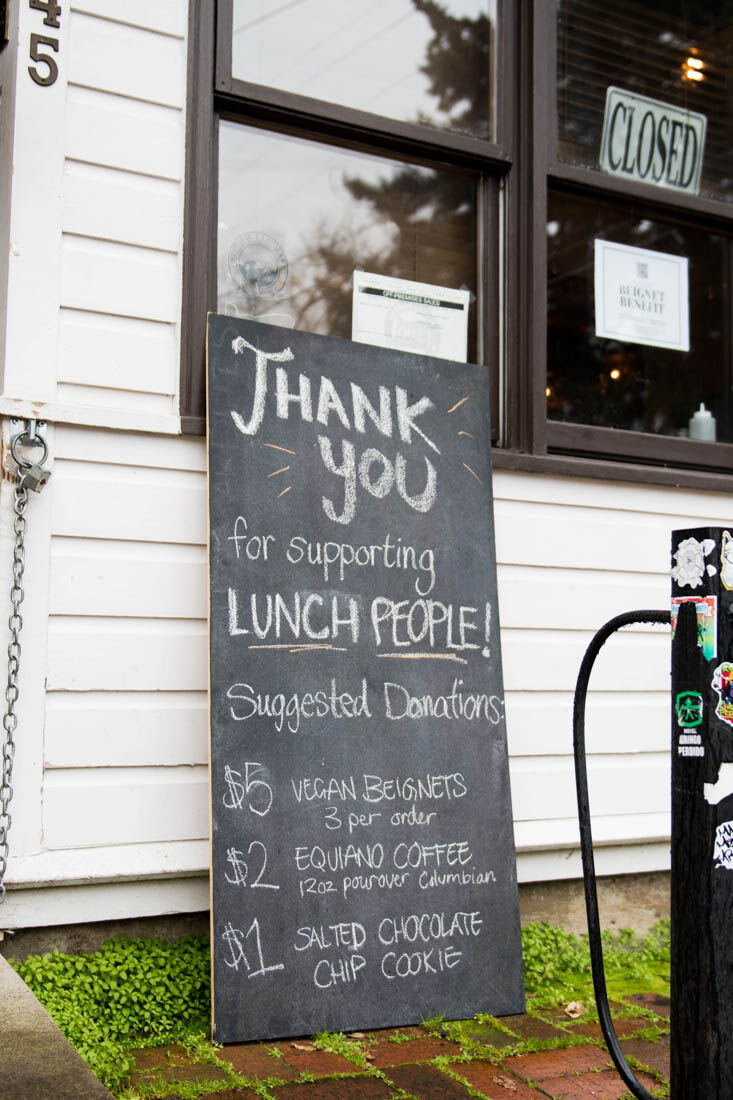 Lunch People holds various fundraisers around Eugene to raise money for the organization. Beignets and coffee are offered with donation-based payments. Miranda McKeever and Corey Prunier, co-founders of Lunch People, plan to open their new location in the spring of 2021. Lunch People is a non-profit that provides free meals for families and community members in Eugene, Ore., Jan. 24, 2021. (Madi Mather/Emerald) 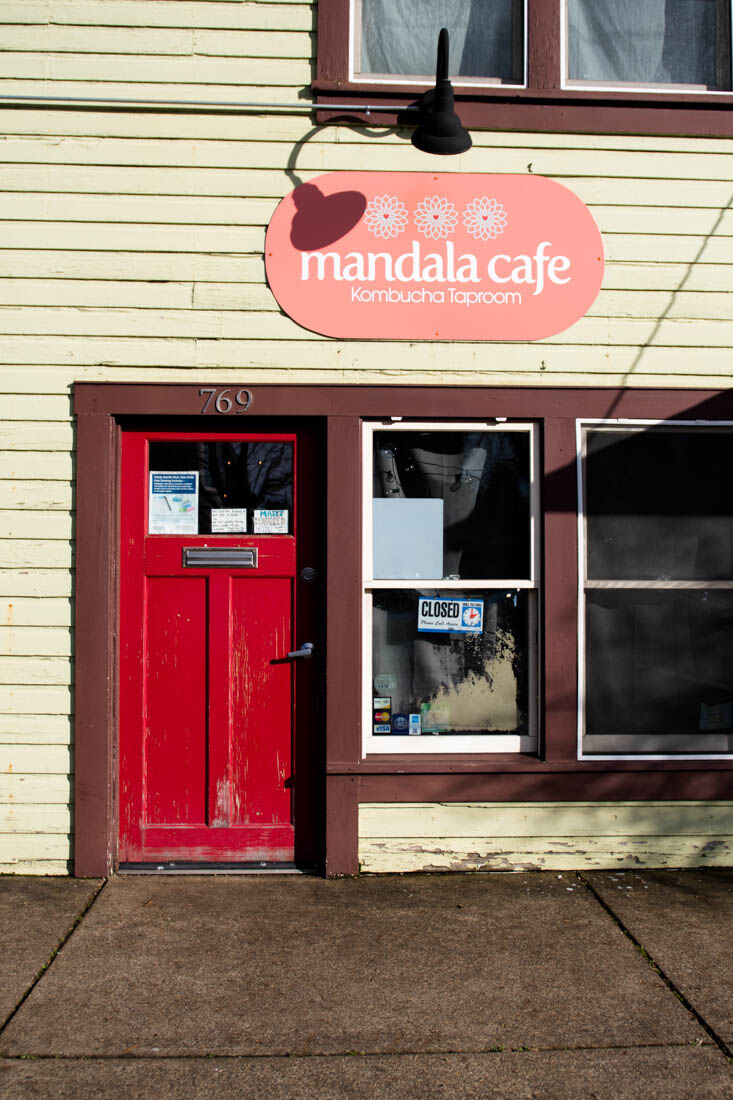 Corey Prunier describes the goals of Lunch People’s new location: “It’s free food, a training program, and it’s a regular cafe.” Miranda McKeever and Corey Prunier, co-founders of Lunch People, plan to open their new location during the spring of 2021 in the formerly known Mandala Cafe. Lunch People is a non-profit that provides free meals for families and community members in Eugene, Ore., Feb. 3, 2021. (Madi Mather/Emerald) 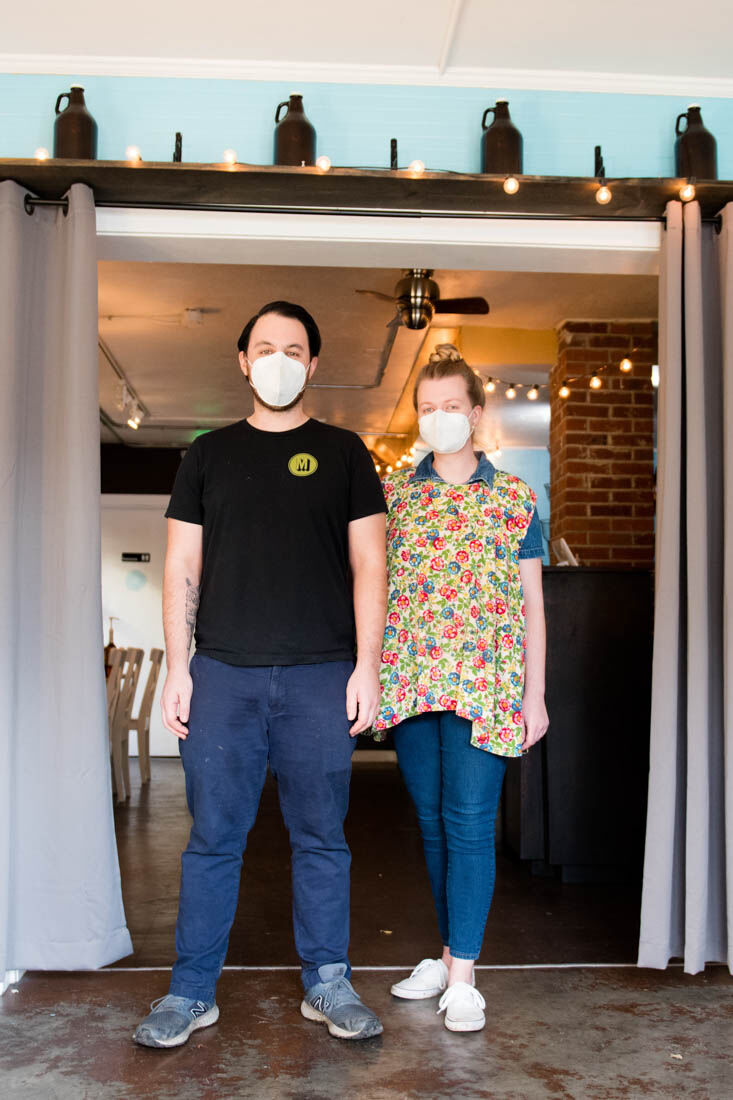 Corey Prunier (left) reflects on the difficulty of opening a new restaurant during a pandemic: “It’s the worst time to open a restaurant, but it’s the most important time to provide food resources.” Miranda McKeever and Corey Prunier, co-founders of Lunch People, plan to open their new location in the spring of 2021. Lunch People is a non-profit that provides free meals for families and community members in Eugene, Ore., Feb. 3, 2021. (Madi Mather/Emerald)

On Saturday afternoons Lunch People can be found serving free lunches for members of the Eugene community. Lunch People is a non-profit that provides free meals for families and community members in Eugene, Ore., Jan. 23, 2021. (Madi Mather/Emerald)

Lunch People experienced difficulty when first developing connections in Eugene, but their numbers rose quickly after engaging with the community. Corey Prunier shares that the unclaimed food was not wasted: “We took the food to homeless camps, it was always eaten.” Miranda McKeever and Corey Prunier, co-founders of Lunch People, plan to open their new location in the spring of 2021. Lunch People is a non-profit that provides free meals for families and community members in Eugene, Ore., Jan. 23, 2021. (Madi Mather/Emerald)

On a Saturday afternoon at Acorn Park, as kids played in the play structure and parents chatted among themselves, Corey Prunier and Alyssa Young stood at a picnic table with two large black containers on top of it. Inside were 40 boxes of homemade vegan chocolate-hazelnut spread sandwiches and vegetables they had brought to distribute freely.

Prunier opened one of the black containers, grabbed a box and held it up. “Would you like some food?” he asked.

Lunch People — a spin off of the term “lunch lady” — is a community group composed of Miranda McKeever and Prunier, chefs who’ve worked together in the Eugene food scene for over five years. After being laid off from Izakaya Meiji at the start of the pandemic, McKeever and Prunier wanted to feed people in need, especially with the knowledge of how many food insecure people there are in Eugene and how the pandemic has exacerbated the issue.

“We wanted to use our skills to help out,” Prunier said.

According to the Oregon State University Policy Analysis Laboratory, food insecurity rates were down to around 10% by December 2019, but the pandemic “brought insecurity up to at least double.” An estimated 1 million Oregonians, about one in four people, were food insecure in 2020.

In March, shortly after Gov. Kate Brown declared the pandemic an emergency, the two started whipping up hot, vegan meals and serving them at Acorn Park, in the heart of the 4J school district. After receiving a strong, positive response from neighbors of the park, with some even giving donations, McKeever and Prunier continued making and distributing food, while thinking about how to make the project more “official,” McKeever said.

Lunch People’s first collaboration was with Craig Edwards and Yen Pham, two community members who wanted to donate masks since there were not enough of them to go around at the beginning of the pandemic. Pham sewed the masks herself and gave them to Lunch People to distribute at Acorn Park. As of mid-January, they had given out over 8,000 masks, Prunier said.

Other early supporters and partners include Organic Redneck Growers and Hummingbird Wholesale who donated both produce and money, even before Lunch People became a registered not-for-profit, making donations tax deductible.

“We made an Instagram account as a form of accountability, initially, so people would be able to see where their money was going to,” McKeever said. “From there, people expressed being interested in helping and making and giving out food. Our first two volunteers were actually from [Community Outreach through Radical Empowerment], Dylan and Ericka.”

Ericka Thessen, one of Lunch People’s first volunteers, also lives in the Acorn Park area. She said her involvement started when she heard that Lunch People was serving food in her neighborhood and sent a message online asking how she could help. As a volunteer, her duty was to deliver any extra food to people who needed it. Sometimes she stopped by homeless camps, but other times she dropped the food off at a doorstep of a fellow 4J school district family in need, Thessen said.

Thessan is also the youth advocate of CORE, a community organization “dedicated to supporting, empowering and advocating for young people,” according to its website. CORE’s efforts also include food insecurity alleviation programs such as Street Feed and Street Outreach Alliance Project.

When Lunch People started serving food, “it wasn’t much to juggle since we were furloughed and had all week to prepare,” Prunier said. “That first call with CORE made it real.”

McKeever said CORE encouraged her and Prunier to continue their cause, describing how on an early phone call with CORE members, the duo thought of passing on their efforts to “people who were more qualified,” but that the organization insisted that Lunch People’s efforts “could be something bigger.”

“We were filling a niche as a low barrier food resource with no qualifications, since many others require age or other qualifications,” McKeever said. “[CORE] appreciated that we were filling in the cracks for people in the pandemic, especially since it was hot, high quality food with no barriers.”

In the summer, McKeever and Prunier served between 25 and 100 hot meals a week as well as produce boxes composed of donations from local farms.

Then the summer wildfires hit, bringing both a harrowing experience and a significant turning point for Lunch People.

“We got hundreds of pounds of produce during the wildfire, we had a flower farm donate flowers and over a hundred deliveries,” Prunier said. “Because we’d been working with local farms, they had to take all their produce with them, but had no way to sell it. So they offered it to us and two other organizations since it was rotting and they didn’t want that produce to go to waste. That was a way for us to prove that we were dynamic, that we were important.”

Even in the midst of tragedy for many during the wildfires, Thessen said the disaster brought a huge boost in support for Lunch People, since it was one of the few organizations that wasn’t shut down. Due to the hazardous air quality, Lunch People switched to contactless delivery, which encouraged many people to reach out and ask how they could help.

“There were a lot of things at the time we couldn’t do, but that was something we could do that made us feel all connected,” Thessen said.

The wildfires and COVID-19 both made serving hot meals every week difficult, and Lunch People started looking for a more sustainable, long-term way to deliver their services, which inspired opening a cafe. The idea of Acorn Community Cafe was born, with the name paying homage to the park where everything started.

At the end of October, Lunch People announced in an Instagram post that it would take a couple month hiatus to recharge and plan for the new year. During this break, Lunch People and CORE discussed how to make the cafe a reality. In discussing what business model the cafe should be, Lunch People and CORE decided it made the most sense to open as a not-for-profit cafe rather than a 501(c)3 nonprofit, allowing them more flexibility with funding and to make decisions quickly like they did during the wildfire, McKeever said.

Lunch People’s fundraisers have come in all shapes and sizes, including selling art pieces from community creatives, Heart of Willamette Cooking School raffling off lessons and partnering with Party Downtown and Izakaya Meiji to do pop-up benefit events.

“We’re encouraged by people wanting to do fundraising for us, and it’s cool to see that we’re  raising money through small businesses and artists instead of relying on corporate sponsorships,” McKeever said.

At the end of December, Lunch People had partnered with CORE to bring to life the not-for-profit community cafe to west Eugene. The two organizations put together an advisory board to oversee the operations of the cafe and other programs within it, including continuing the distribution of free food on a “pay as you will” system, a food pantry and a paid job training program.

The job training program was a direct request from CORE, since it was a service that the community wanted, Prunier said. She wanted to make a program to help young people learn their rights and gain confidence in those spaces, since when she was younger she also faced homelessness and working in restaurants helped her out of it.

“Part of CORE’s main objective in the partnership is putting people into an eventual internship or paid employment after going through training at the cafe, especially since it’s difficult for marginalized, at-risk youth to find employment with little experience and especially no address,” Thessen said. “It’s more than just feeding them one time, but really uplifting them from those at-risk poverty situations.

At the beginning of February, Lunch People secured the lease for their location at 769 Monroe St., formerly Mandala Cafe, and paid the first month’s rent with the combined funds from their GoFundMe page, donations, Patreon members and benefit pop-up earnings. The cafe and its programs will not be slated to open until spring, because the space needs cleaning, equipment and licenses to operate.

Even though they’ve secured the space, there’s still much to do, and as a not-for-profit cafe Lunch People’s budget is very limited. They will continue their fundraising efforts with more benefit pop-up collaborations planned in the coming months. In the meantime, they’re encouraging people to subscribe to their Patreon, since it’s a more consistent stream of funds and allows for them to “open [community members] up to the inside world of Lunch People,” McKeever said.

Lunch People also ended their hiatus the first weekend of January and have been seeing more new faces with each weekend, McKeever said.

“I’m excited to see the cafe, because it’s more downtown and able to get a larger connection with a broader swath of community,” Thessen said. “There’s just so much need, and that’s the only way to describe it.”

Lunch People is fundraising for covering the costs of getting the cafe up and running. To support them, check out their Patreon.

Em's passion is writing about the intersections of food, culture, and relationships. She is an aspiring communications professional. In her free time, she manages "Sik Fan Mei, Ah?" her personal food blog. Follow her on Twitter (at)catchuptoemily