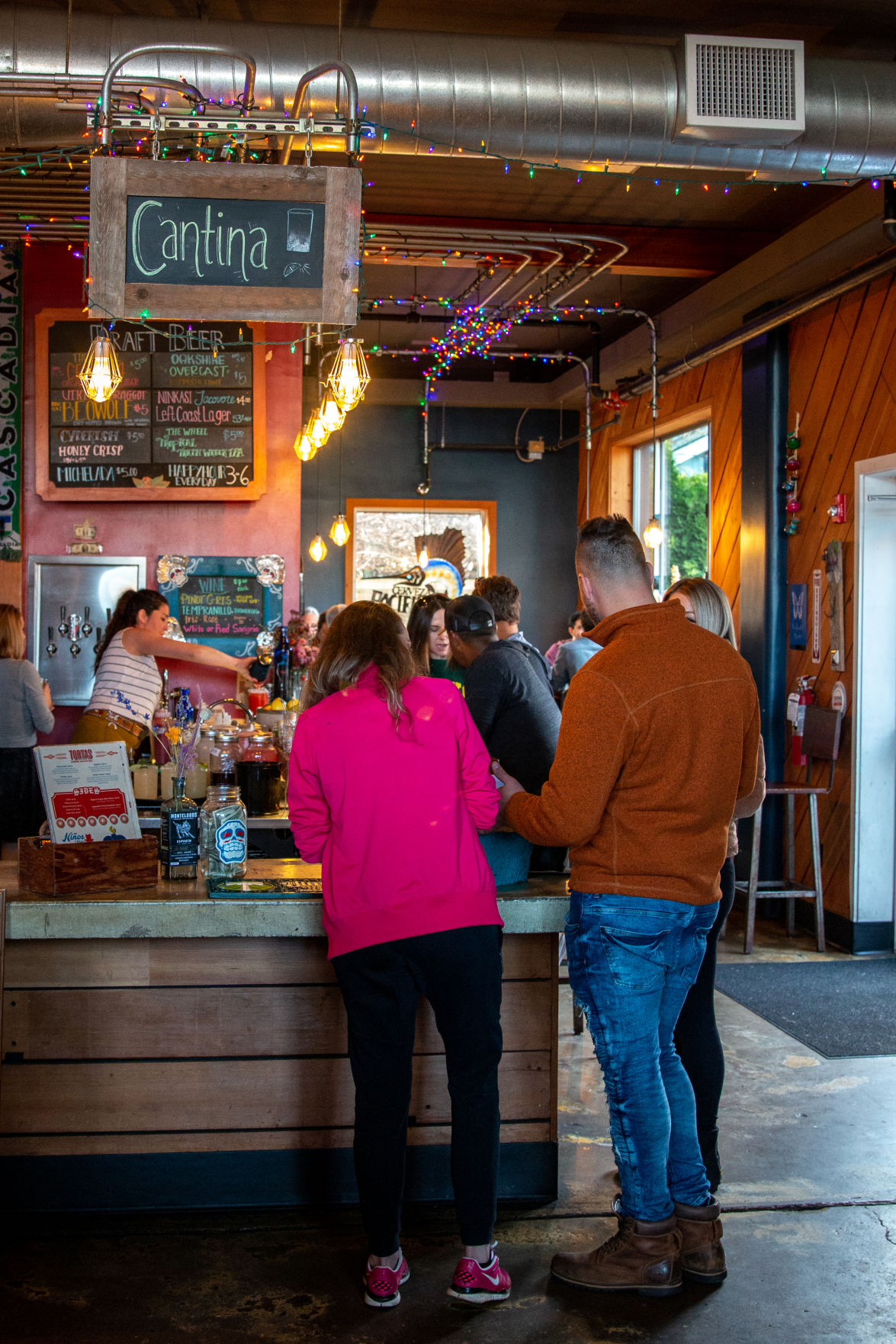 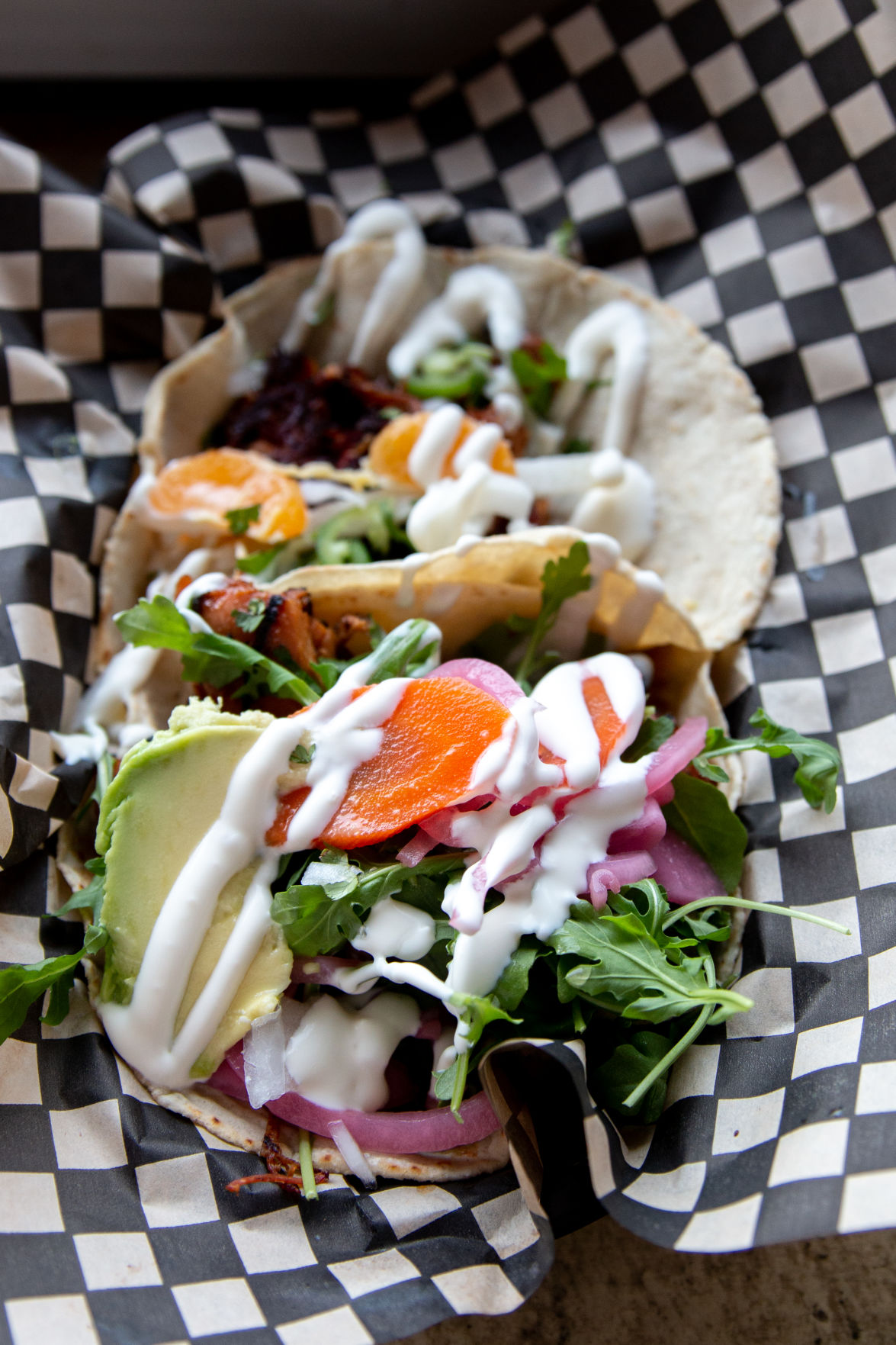 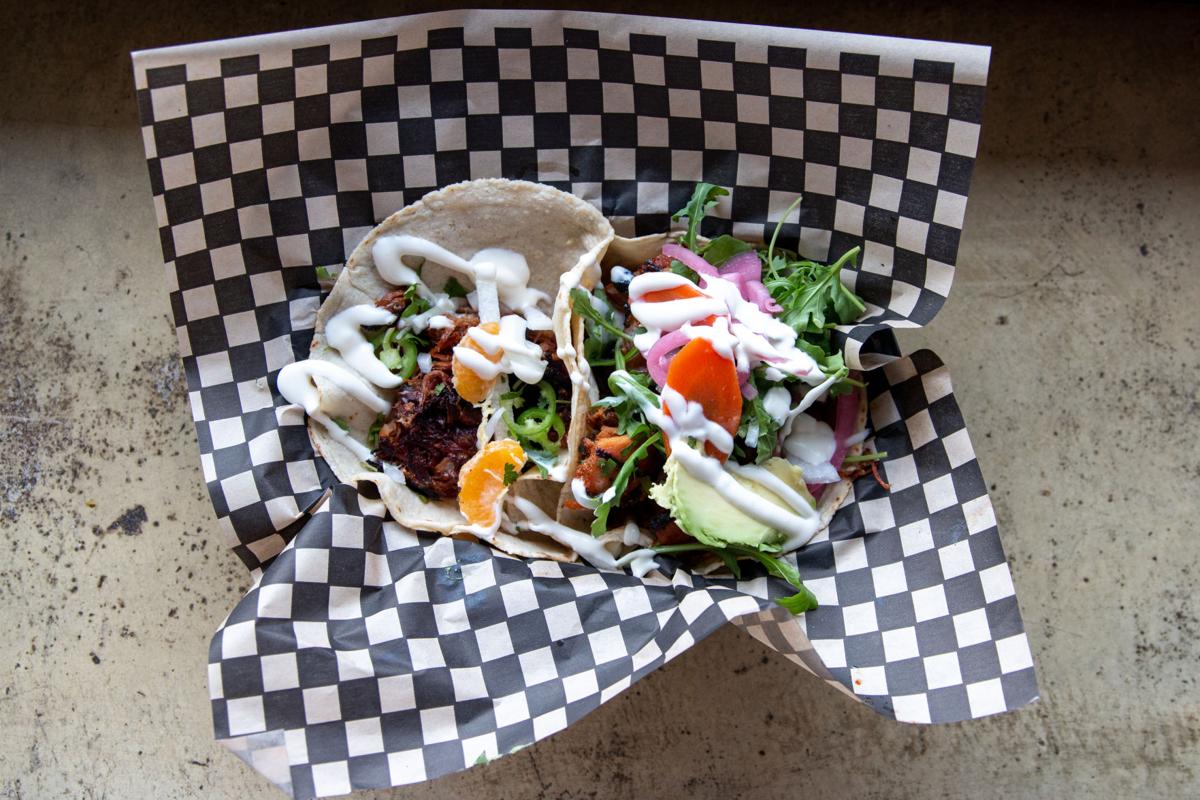 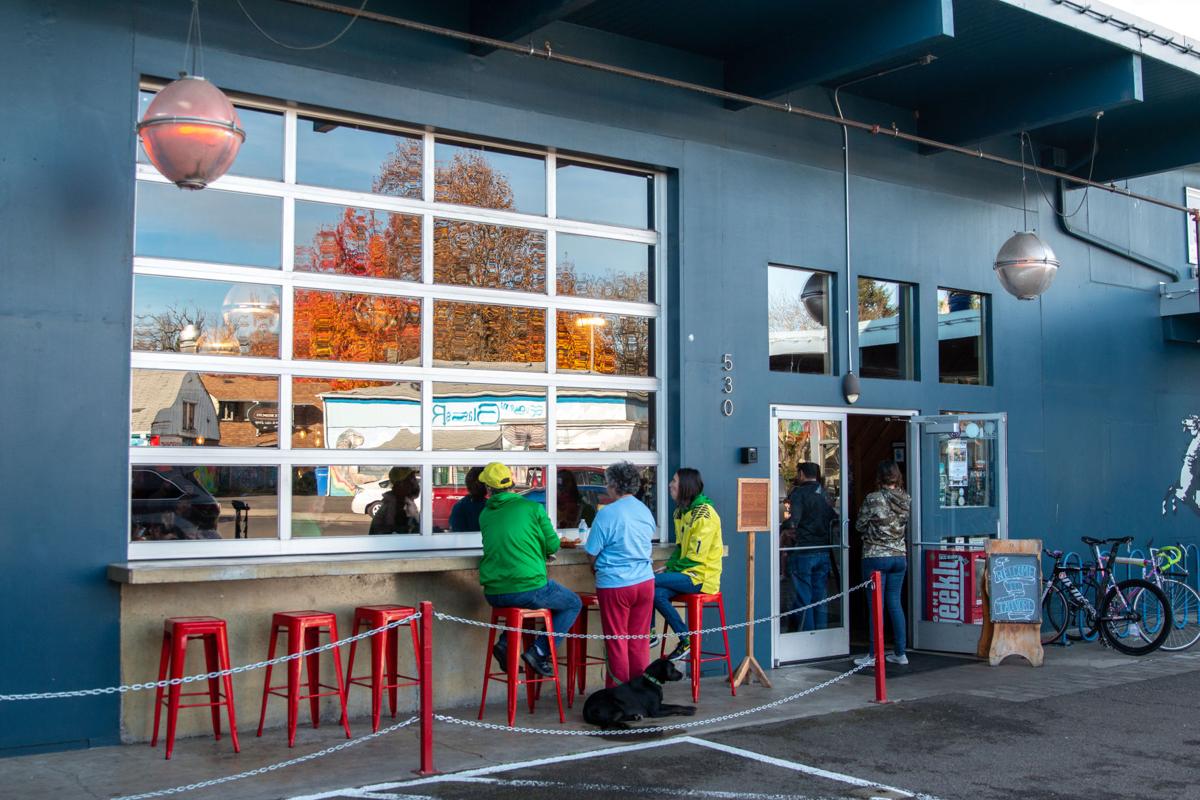 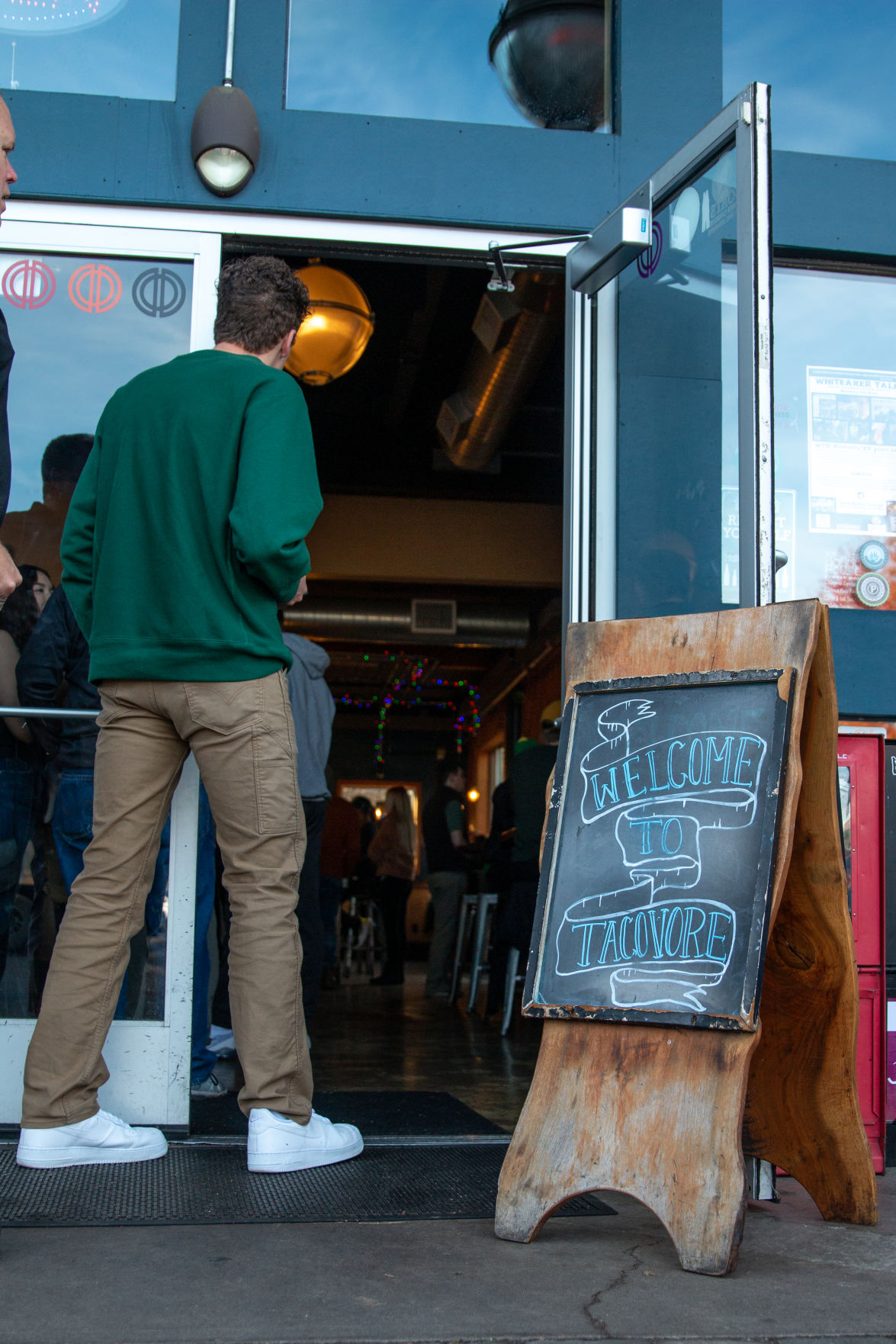 Tacovore's line wraps around the front door of the restaurant. Tacovore is a Mexican food restaurant located in Eugene, Ore. on Nov. 16, 2019. (Maddie Knight/Emerald) 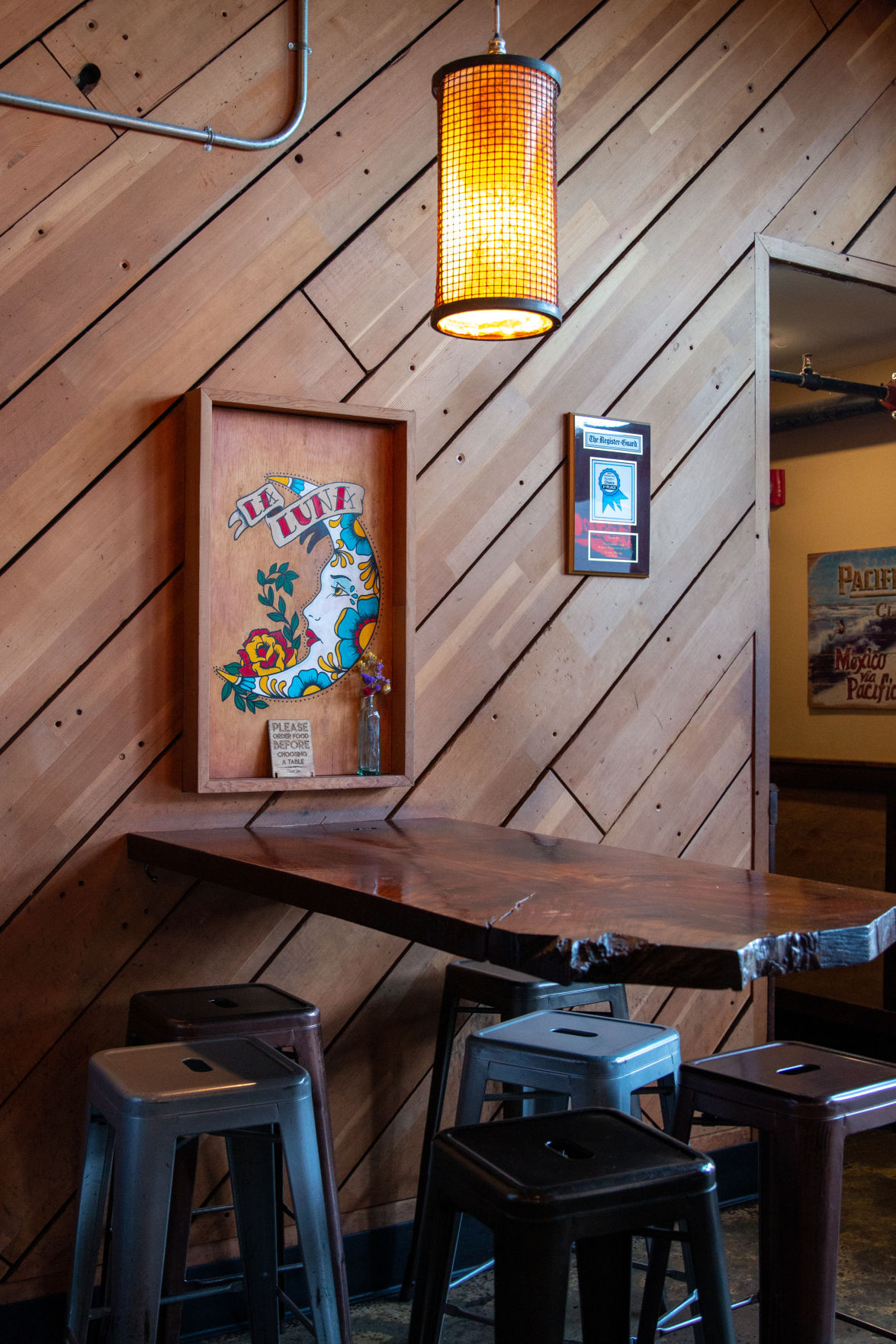 Foods that are inexpensive and delicious are often a staple in many cultures, one of the most well-known being Mexican tacos. People often claim they want authentic tacos — “authentic” often insinuating cheap, since the fare is traditionally a street food. However, as this traditionally cheap food gets pricier, does it stay as true to its roots as their inexpensive counterparts?

Served in soft corn tortillas with minimal toppings, traditional tacos in Eugene can be found in over ten restaurants and taquerias. Most of these places serve authentic and inexpensive fare, tacos specifically priced under $4. Most trucks and brick-and-mortars will have “tacos” on the menu, with meat options listed on the side, usually consisting of steak, pork, chicken and chorizo, a spicy sausage.

“Authentic has the meaning and background of something that has thought and purpose,”  said Elizabeth Raymundo, a worker at Raymundo’s Family Taqueria and member of the Raymundo family. She is a student at George Fox University who comes back to Eugene on the weekends in order to help at the family food truck, which when visited was stationed at 2025 Franklin Blvd on a Friday evening.

Authenticity when it comes to pricing is no longer just something that can be blanket statements of what is considered “good” or “bad” food. It is a reflection on the personal relation that a person decides to present to the world. Sticking closer to traditional ways is an homage to one’s background, since some folks value that more than others.

The food truck has a large yellow menu that splits the ordering window from the pick-up window. The menu itself is split down the middle with photos: the left side written in Spanish and the right in English. A taco with any of the standard meat options, topped with onion and cilantro, is $2, while their “tacos campechanos,” filled with chorizo, steak and grilled onions, is $2.25.

Both types of tacos came hot in the box, the steam of the tacos rising in the night air. In the light that beamed down from within the truck, the fragrant oils slowly dripped out of their tortilla wrappers. Topped with a hearty amount of diced white onions and cilantro on top, there were also some radish slices and lime wedges on the side. Even when eating, the tortilla held up and the flavors were strong but not overwhelming. This was how typical, traditional Mexican tacos were: simple, self-explanatory and delicious.

“[Expensive tacos] lose culture and background,” Raymundo said. “They are typically less authentic, since tacos are meant to be finger food.”

Another $2 taco stand, actually referred to on Google Maps as “Taco Stand,” is El Buen Sabor, their name translating to “good taste” in Spanish. Driving on Blair Blvd, one would be hard pressed not to miss the bright blue food stand.

The stand prides itself on its handmade tortillas, which has a distinct taste and holds its weight in toppings more than other Mexican restaurants’ tortillas. Despite only having four meat options - chicken, pork, carne asada and chorizo - they’re seasoned and grilled to fragrant, just-oily-enough perfection. The meat sits atop a perfect amount of shredded cabbage and lettuce, topped with a light guacamole taquero and wrapped in the homemade tortillas, the flavors and textures balanced each other out really well and left you wanting more.

The cook at the time was unavailable for comment due to running the stand by herself on a Friday night, but there is no doubt El Buen Sabor’s food is authentic: It stays true to its inexpensive nature and does not sacrifice quality. Just a few blocks away is a white-owned Mexican restaurant that is most well known for their (comparatively) expensive tacos.

This is not to say all expensive taco locations are bad and/or inauthentic. It’s simply a standard that people have for tacos. This issue of cheap cultural food balancing between getting paid for its worth versus being “too expensive” is constantly in negotiation.

On the opposite side of the price spectrum is popular and recently awarded taco joint Tacovore, located on Blair Blvd and owned by Steve Mertz. Tacovore won the Best Latin American Food of 2018-2019 award from Eugene Weekly last month, and the certificate the alt-weekly gave to the restaurant is hung up crookedly to the right of the condiments counter.

Despite being well-known for their tacos, whenever Tacovore is brought up, a majority of UO students, Eugene locals and even Willamette Week called the restaurant’s tacos “bougie” and inauthentic.

A majority of their taco offerings are at the $3.75 pricetag, with Tacovore’s cheapest options being their $3 bean and cheese taco, made with “coconut-braised organic Oregon black beans,” and their $3.50 mushroom taco, filled with “crispy marinated Cremini mushrooms with ginger, lime, mint, cabbage and serrano chile.” Tacovore’s menu options boast of having Oregon-raised meat, Tillamook cheese and other local ingredients.

In the thick of a Monday dinner crowd, their tacos did not seem anything worth great praise. The carne asada (steak) in the taco was overcooked, and any flavor or char from the meat was gone because of the exuberant amount of guacamole. The texture was just the too-chewy meat that almost seemed a part of the extremely thick guacamole it drowned in. The tortilla barely held itself together under the weight of both ingredients.

In a 2017 interview with The Register-Guard, Mertz said, “tacos are a fun food, they’re informal,” and “to me, a taco is anything you can put in a corn tortilla.” Mertz described his restaurant as “a lifestyle restaurant with good, quality food produced locally and with fewer pesticides.” Mertz was not available for any updated comment.

His statements make clear he’s aware of potential backlash, plus the recent award and daily stream of customers shows that he doesn’t really care about the authenticity of the restaurant. To what degree of authenticity they choose to make their food to is more of a personal matter than monetary. If there was more money to be made in having authentic food, then smaller, family-run restaurants should be more popular and be winning awards, rather than Tacovore, which was created in mind to cater to white customers.

So does authenticity have a price ceiling? Do customers just not care about authenticity? The answer doesn’t really lie in either sphere, but rather, in a restaurant’s character.

When discussing the authenticity of restaurants and their pricing practices, the conversation must turn away from whether or not something is properly priced. The question now is if you want your hard earned money to go toward quality food and the background it represents. As much as tacos are traditionally inexpensive, the restaurant’s cooks and other workers still have bills to pay. Your spending practices are a direct indicator that their traditional cooking is being seen and valued, and not only by those in the same culture, but wanted by those in other communities - even when there are others who just want to make a pretty penny.

Em loves writing about food and connecting to culture and lifestyle, she is now also the "Asking for a Friend" columnist. She is an aspiring PR professional and writer. In her freetime, she manages her own blog, "Em's (PR) Thoughts" about PP.