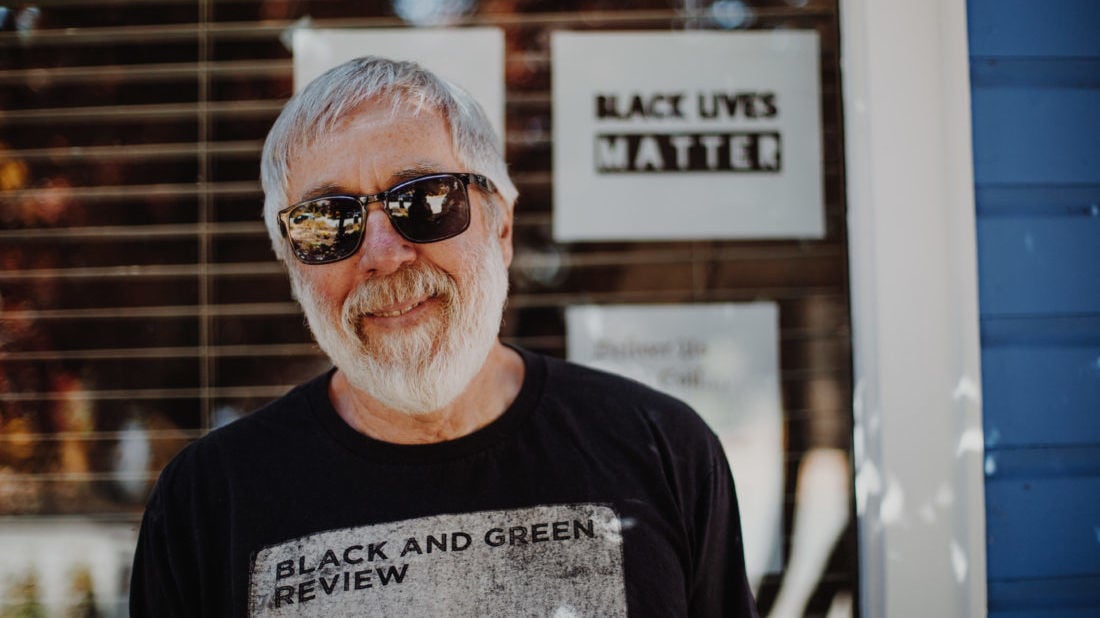 Rioters ran through the streets of downtown Eugene, blocking traffic and resisting arrest on June 18, 1999. The event had escalated from an international protest named “Carnival Against Capital” earlier that same day. People went to the nearest bank and started smashing windows according to John Zerzan, a prominent, Eugene-based … 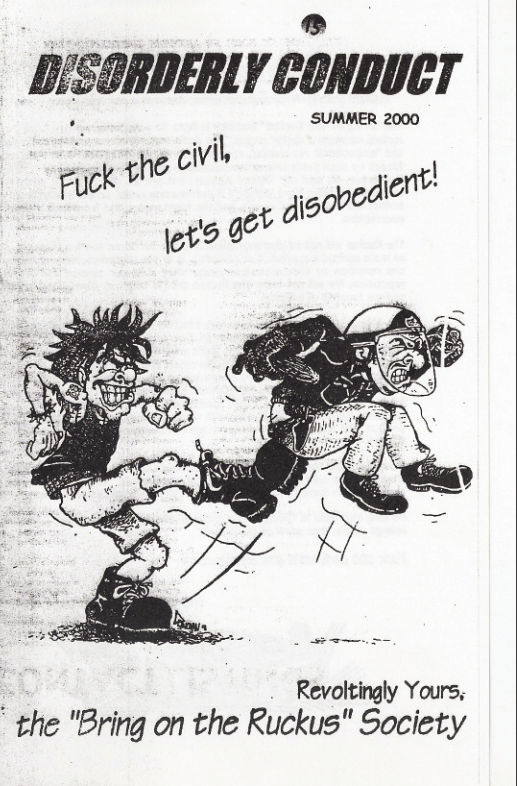 The anarchist publication Disorderly conduct, which was distributed around Eugene circa 2000. (Courtesy of Disorderly Conduct) 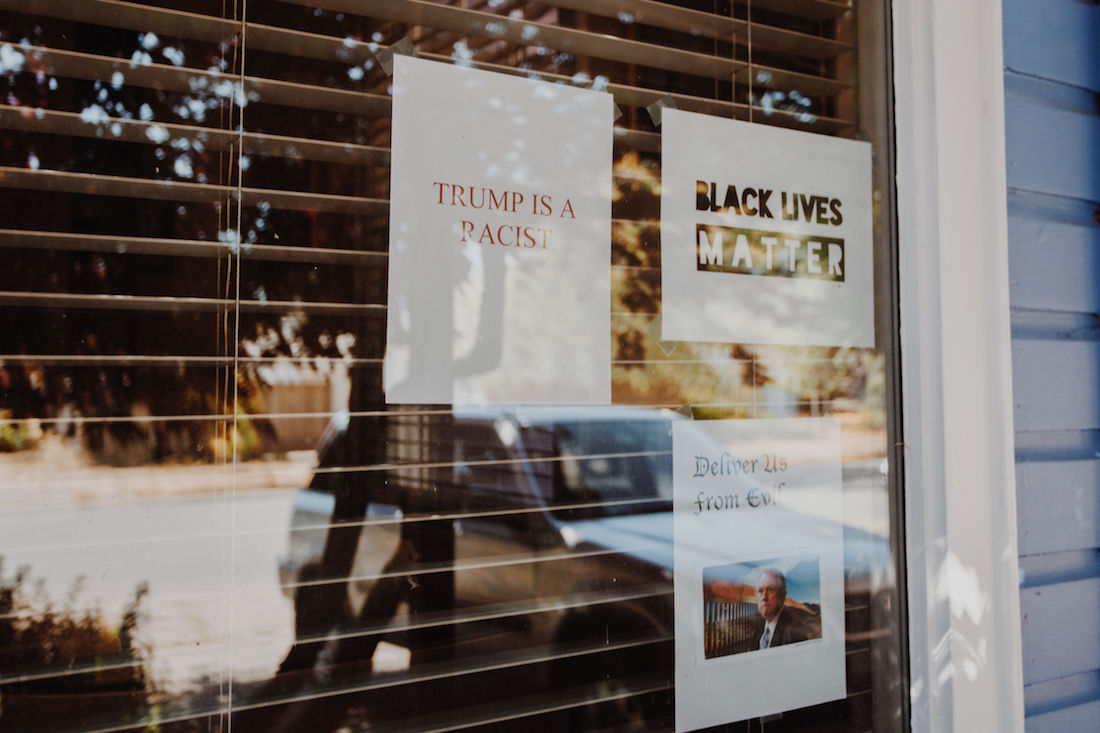 Signs in the front window of Zerzan’s home reflect political messages. Zerzan acts as a highly prominent voice in green anarchy, a subset of anarchist thought that focuses on environmentalism and deindustrialization. (Sarah Northrop/Emerald)

Rioters ran through the streets of downtown Eugene, blocking traffic and resisting arrest on June 18, 1999. The event had escalated from an international protest named “Carnival Against Capital” earlier that same day. People went to the nearest bank and started smashing windows according to John Zerzan, a prominent, Eugene-based anarchist thinker. Activist Rob los Ricos, who was present at the riot, ended up spending seven years in prison for hitting a cop in the shoulder with a rock.

“Nobody would have predicted that,” Zerzan said about the spontaneous downtown riot. “No anarchists were planning it, but it was called the ‘Anarchist Riot’ in the giant front page headline the next day.”

From the riot, two were hospitalized, more than 25 arrested and over a hundred left with minor throat and eye wounds caused from anti-riot tear gas, according to an Oregonian article published the day after.

It was around this time that the city of Eugene began to develop a national reputation for anarchist movements and activism. In 2000, the Chicago Tribune described the city as a “cradle to [the] latest generation of anarchist protesters.” That reputation may have since diminished, but traces of Eugene’s once bustling anarchist community are still alive today.

At the time, then Republican mayor Jim Torrey labeled Eugene as the “Anarchist Capital of the United States.” He considered the protests to have a definite negative impact on the city.

“We had a substantial amount of anarchism going on in Eugene at that time,” Torrey said. He remembers anarchists “throwing rocks through windows, blocking traffic, attacking cars.”

Initially, these occurrences were tied to a larger anti-globalization movement, but in the years following, Eugene began to function as a hub for a broader range of anarchist activity.

A number of small, independent anarchist publications were produced and distributed in and around the area. A newsletter called “Break The Chains” focused on political prisoner support as well as critiques of the prison system. Another publication, “Disorderly Conduct,” featured general anarchist news, essays and information — along with its slogan, “Fuck the civil, let’s get disobedient!”

In the Whitaker district, Zerzan was airing a talk radio show on the pirate radio station Radio Free Cascadia. “It was kind of a lot different,” Zerzan said, speaking of the content on his early broadcasts. Since nobody could call in on pirate radio, Zerzan mostly read from his favorite texts and highlighted anarchist news stories.

RFC was eventually raided and shut down by the police, but Zerzan evolved his show into the still-running Anarchy Radio on KWVA, which broadcasts every Tuesday at 7 p.m.

Zerzan now acts as one of the most prominent voices in anarcho-primitivism or green anarchy, a subset of anarchist thought that focuses on environmentalism and deindustrialization. The philosophy critiques both civilization and technology.

Some of these ideas also gained national attention in the 1990s after the arrest and conviction of Ted Kaczynski — otherwise known as the Unabomber — who killed three people and injured many others during a bombing campaign that ran from 1978-1995.

Before his arrest, Kaczynski had written “The Industrial Society and Its Future,” an essay criticizing technology and industrialization as a detriment to society and human freedom. Zerzan thinks the Unabomber and this essay had at least some influence on later anarchist protests in Eugene.

Zerzan himself visited Kaczynski before his 1998 conviction. “I could see that we have the same ideas,” Zerzan said. He made sure, however, to differentiate his methods: “Not the same tactical approach, to put something in mail that might blow up some secretary or mail carrier or whatever — that ain’t right.”

Zerzan has kept his radio show going since 2001, now having broadcast over 800 episodes. He is also an editor of “Black and Green Review,” an anarcho-primitivist magazine currently in its fifth issue. The magazine’s main goal is to “deepen the anarcho-primitivist and green anarchist critiques through open discussion and debate.”

Despite Zerzan’s lasting relevance, he remains one of the few vestiges of Eugene’s once bustling and highly-visible anarchist community.

He admits that the anarchist scene in Eugene has certainly died down.

“By [2006] the whole thing was done,” he said. “It was just back to normal, quiet Eugene — and I love Eugene, but the anarchist scene… everybody had headed for the hills.”

Former mayor Torrey also admits to this shift, but recognizes the ways in which a Eugene anarchist culture still exists: “It isn’t nearly as prevalent as it was in the past. I think now [anarchist activities] are more socially-oriented activities.”

And that certainly rings true with the Neighborhood Anarchist Collective, one of the more recent developments within the Eugene anarchist community.

According to NAC’s principles, the collective bases its operation on a vision of social anarchism that emphasizes the ideas of mutual aid, autonomy and community support.

“The problem with our current system is that democracy isn’t real in it,” said Serra Joy, who helped found NAC just last year. “If everybody actually has a voice and actually gets to participate in that system, then that is direct democracy. That is anarchism in the sense that I see it — social anarchism.”

Joy did not always identify as an anarchist. In fact, she only recently became involved with it after a series of events caused her to lose faith in the country’s current political system.

For Joy, the emphasis that social anarchism places on community is what gives her hope outside of a difficult political system. “If you can’t affect democracy, if you can’t vote for a change on the grand scale, then we have to just look more local,” she said. “Ever since I’ve done that, I feel more empowered.”

Part of NAC’s goal is to reconnect with the strong anarchist culture of Eugene’s past. “We were aware of that and we feel like we want to help that culture revive,” Joy said. “We want to help empower people, to see the power that they have within themselves and their friend group.”

One way NAC attempts to achieve that goal is through a monthly event called the Share Fair. “We generally gather a bunch of resources and support from organizations and create a space for people to come and receive those resources and find community connection,” Joy said. The event makes things such as medical care, haircuts, emotional support, food and clothes available to the community, all free of charge.

The Share Fair has seen over 100 people in attendance at each event over the course of its six month existence. “It’s a lot of fun and I feel like for me that’s the best project that’s come out of the Neighborhood Anarchist Collective,” Joy said.

In addition to the Share Fair, NAC organizes educational opportunities such as film screenings and radical reading clubs, as well as letter writing events to support political prisoners.

For both Joy and Zerzan, these anarchist ideas are still very much relevant and are necessary in order to regain a sense of community.

“Community is gone,” Zerzan said. “It’s been swallowed by mass society, so everybody wants it… but no, you don’t get that.” For this reason, Zerzan even says that society is likely due for another uprising.

Whether or not that’s true, it is clear that anarchist thought still holds its place within Eugene.

“It’s amazing how many people are really interested in the core, fundamental values of the anarchistic theory that we engage in,” Joy said. “My hopes with anarchism in general is that its helping people find that community that we desperately need.”

Nic is an Arts and Culture writer for the Daily Emerald. Mostly music stuff. You can also hear him screwin' around as a DJ on KWVA every Wednesday night.