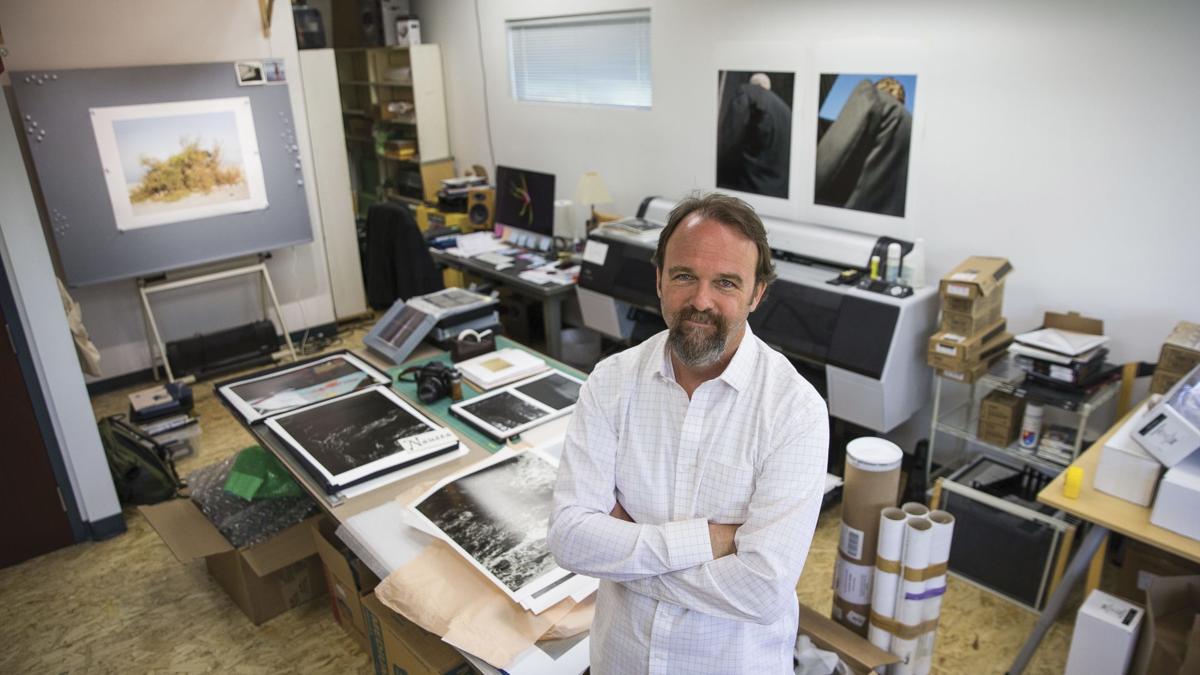 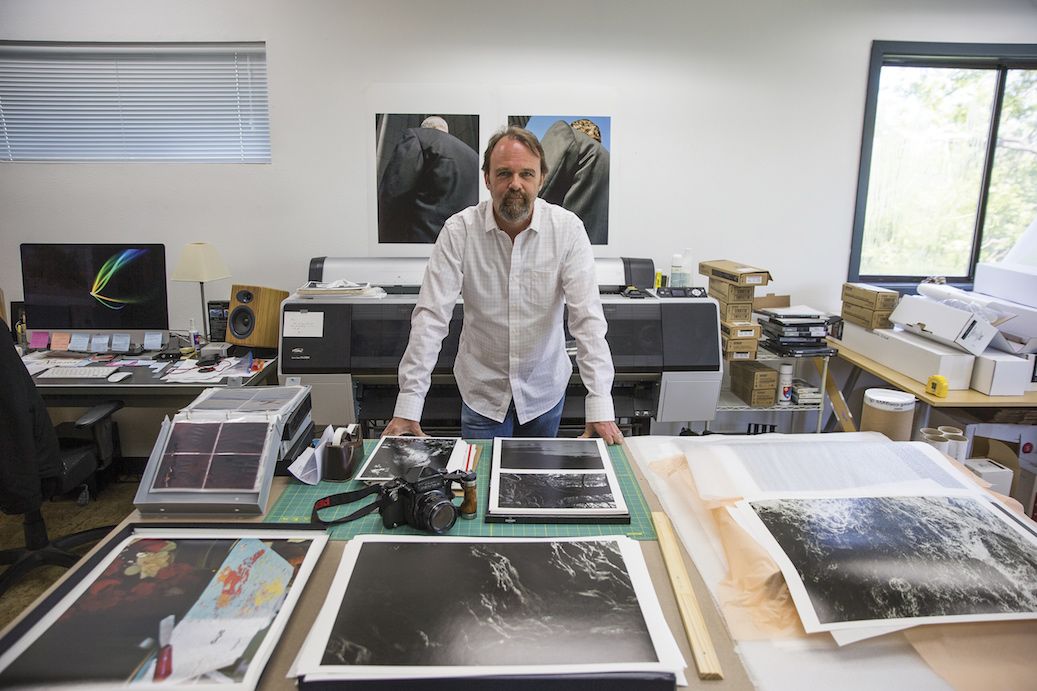 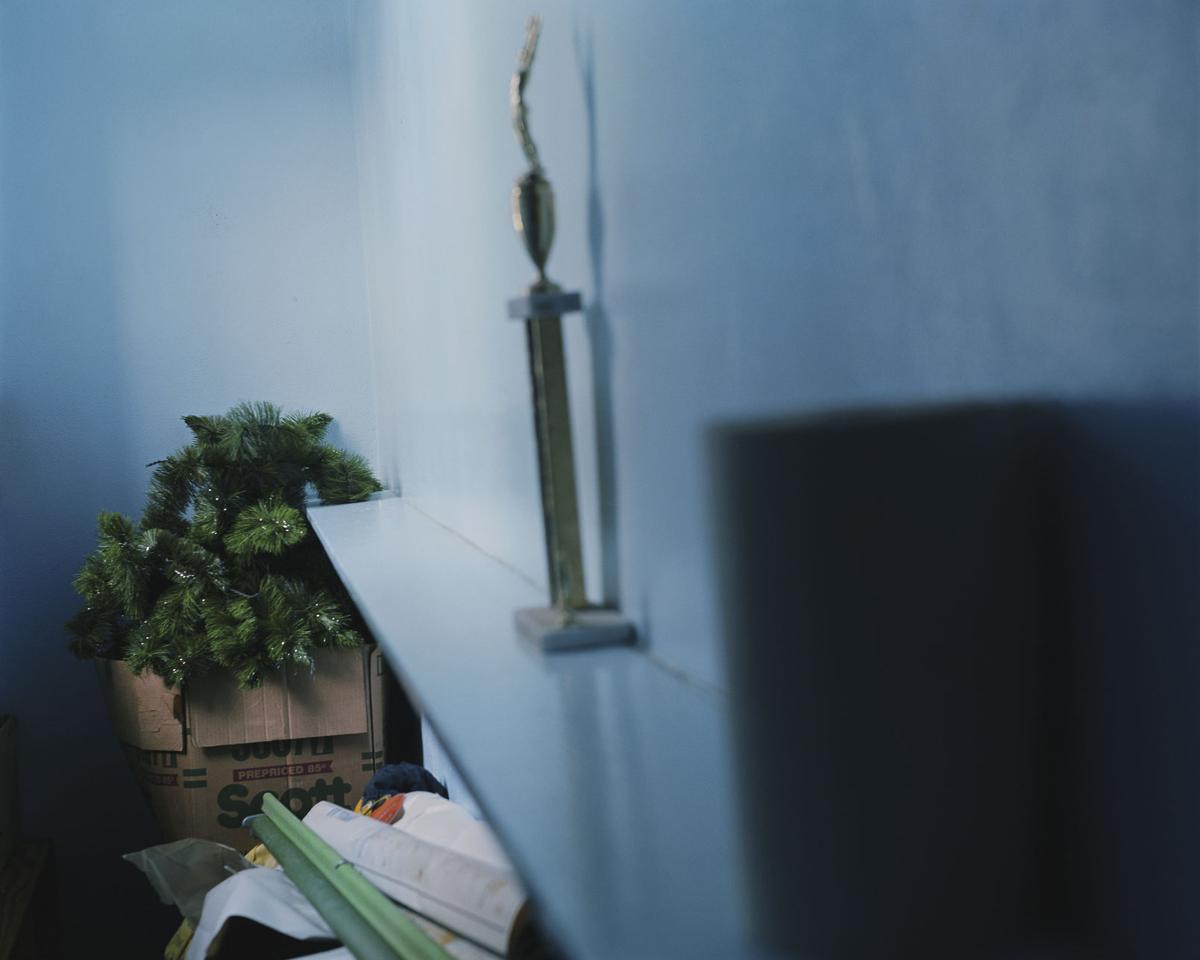 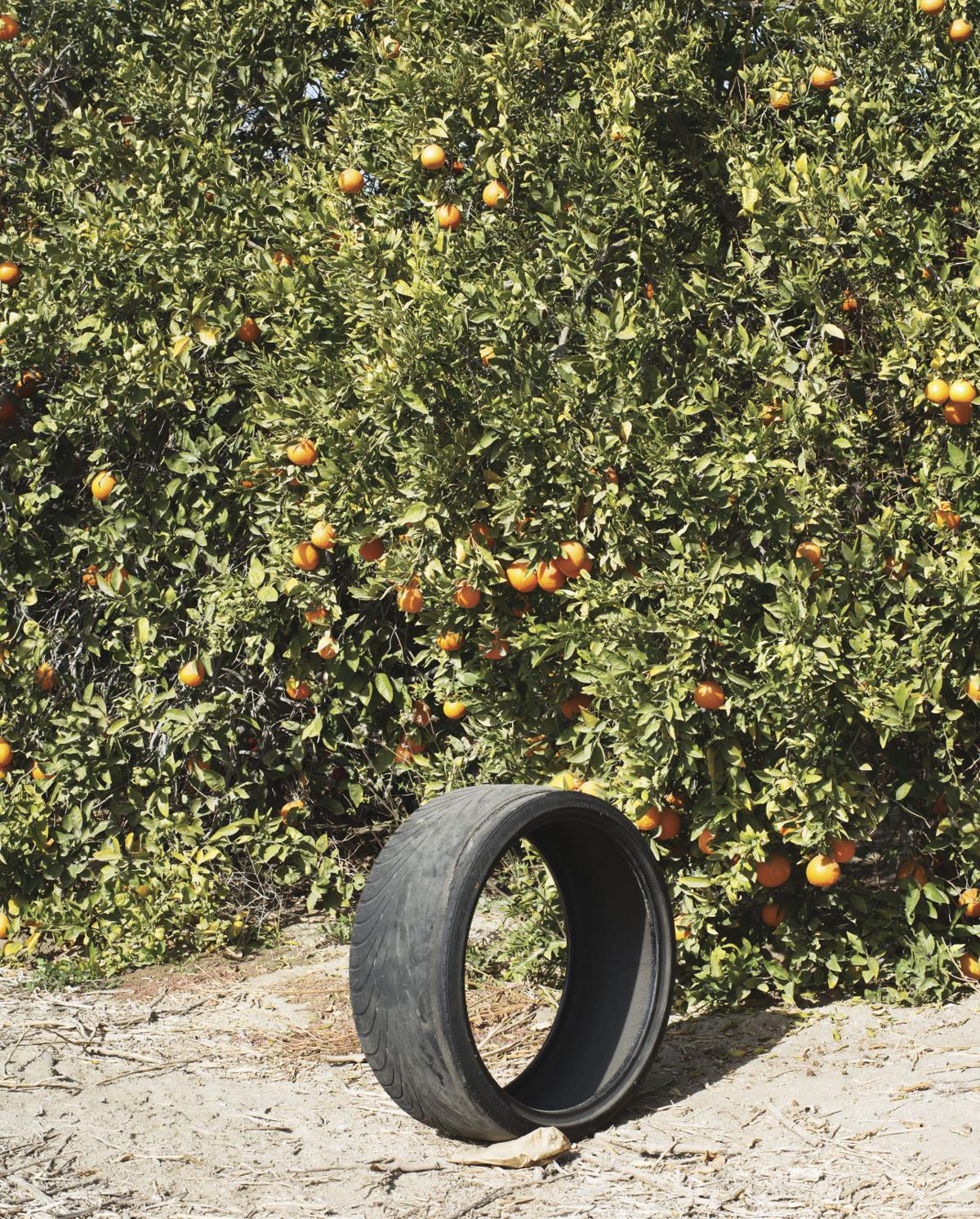 This story is by Emerald contributor Emily Olson.

Ron Jude bought his first camera at age 13, “literally out of a Sears catalog,” he said. For the University of Oregon professor, an internationally-acclaimed photography career all started with goofing around in a high school dark room. He made photos to document his friends, muscle cars and the woods where he grew up in rural Idaho.

It wasn’t until his time at Boise State University that he began taking his work seriously. He pursued a philosophy major, but realized that he could explore the same ideas through photography.

Ask him about his work today, and he won’t hesitate to offer a line of philosophical inquiry. “With all media, but photography especially, people are dying to see metaphors,” he said, grabbing a large photo from a $5,000 inkjet printer in his studio. “What does that trophy mean?” he asked of the out-of-focus object in the photo’s center, which stands like a sliver of shadow against a sky blue wall. “Well it’s a trophy,” Jude said. “It means nothing. That’s all there is to it.”

The image is part of a portfolio he’s revisiting in preparation for his latest photobook. Set for a May 19 release at The Photographers’ Gallery in London, the book includes interior still-life images of public schools — empty, eerie and thematically esoteric. The collection is titled “Nausea,” in direct reference to Jean-Paul Sartre’s 1938 novel by the same name, which is regarded as a cornerstone of existentialist thought. Jude first read the novel as an MFA candidate at Louisiana State University. The themes of the book hit him like an epiphany, influencing the way he’s created and displayed images since. “It’s been the same idea over and over again in different ways,” he said. “I never quite figure it out, which is the fun part.”

For Jude, capturing, finding and arranging photos offers no metaphorical meaning, no relief from the existential questions that follow him. But artistic expression serves as a way to search.

His work has been exhibited in over 50 notable galleries, located everywhere from South Korea (the Daugeu Cultural Center) to New York (Roth/Horowitz Gallery). His photos have been reprinted in publications like The New Yorker and Harper’s Magazine. But his favorite way to present the images he finds and creates is in a photobook.

“It’s physically a different way of interacting with pictures,” Jude said. In the three-dimensional space of a gallery, an audience can navigate in any direction or at any pace. “You don’t know whether they’re going to start here or here or here,” Jude said. Photobooks, on the other hand, are designed to be viewed from beginning to end, allowing the artist better control of the structure and sequence, embedding a narrative arc. The medium has become popular among avant-garde and academic photography circles in the past decade. The rise of digital technology made designing and printing the high-quality books easier. And, with the advent of an internet that inundates us with images, “the book became a really purposeful way to reduce the noise and distill all that stuff down to something legible,” Jude said.

Jude self-published his first photobook, “Alpine Star,” in 2006. The collection of images was recently on display at the J. Paul Getty Museum in Los Angeles and was originally culled from The Star News, the weekly newspaper of rural McCall, Idaho, where Jude grew up. A long-distance subscriber since 1995, Jude found it interesting that the paper lacked a professional photographer. Community members send in their own snapshots, resulting in a jumble of images low in technical merit, but high in open-ended narrative potential.

“Context is what makes them mine — how I selected them; how I arranged them; the sort of world that I created,” Jude said. The images, all sepia newsprint, vary in shape, size and subject matter. In the book, they shift between quirkiness (a trio of children sporting trash bag ponchos) and striking depth (a group of teenagers circled around a flagpole in prayer). To paraphrase The Incoherent Light critic Darren Campion, it’s an uncanny anti-narrative, irrationally poetic.

Unlike his additional eight photobooks, “Alpine Star” arrived in boxes at Jude’s doorstep. He distributed the 500 books himself, at lectures and niche bookstores, often giving them away for free. Today, used copies sell on Amazon.com from $80 to $300.

While Jude now publishes with the esteemed arts press MACK, he and his wife, Danielle Mericle, manage their own photobook press. Running A-Jump Books has helped Jude master the logistics of photobook design and distribution. But the artistic merit of the medium has proven most valuable to his art. “Now, it’s like every time I do a body of work, I first come to understand it in the book form,” he said.

He’s helping students at UO do the same through a course specifically devoted to photobook production, which is rare among college art programs.

“It teaches you to think about the relationship of images,” said first-year MFA candidate Daniel Miller, who applied to the program after finding Jude’s work online. “That’s probably the biggest and hardest thing to tackle — sequencing images. You take all these various parts and make something new out of them. To make something that means anything in the end is tough.”

Jude’s style has been compared to William Eggleston and Paul Graham, who similarly capture the ethereal banality of everyday life. But if there’s something unique about him, “it’s a stubborn sense of the esoteric. I’m interested in a fairly specific, philosophical thing about images,” Jude said. “I turned that corner 25 years ago, and I’ve just kept going down that road.”

He admits that photography as a medium “can be so maddening. I hear people lament its limitations,” he said. “But I actually think you can play with that. You can use those frustrations to your advantage.” For Jude, that meant learning to balance his own introspective, existential study with the ultimate reality of how audiences react to a work.

His first big exhibition, displayed in 1992 at The Photographers’ Gallery in London, came right after he completed graduate school and began teaching as an adjunct professor at a few institutions in Atlanta. The exhibit’s curator, David Chandler, described it as “returning to the scene of a crime — peering through windows, doorways and iron grilles into deserted rooms and corridors.” He’s returning to the collection again, 25 years later. It’s the same archive of school still-life images from which he’s constructing the photobook “Nausea.”

“I’m at a crossroads,” he said of his decision to approach the archive with an entirely new edit and structure. “I feel like something else is going to happen soon, which I’m in the process of figuring out.”

Like the first time around, audiences attempting to see metaphors in Jude’s images will be disappointed. Unlike the first time around, however, Jude better understands the personal function of his work, what it means to him as an artist and individual. It’s existential thought in its most fundamental form, focused on searching for meaning and seeing an inherent value in not finding it. “Ultimately, that’s the meaning,” he said. “There is no meaning.”