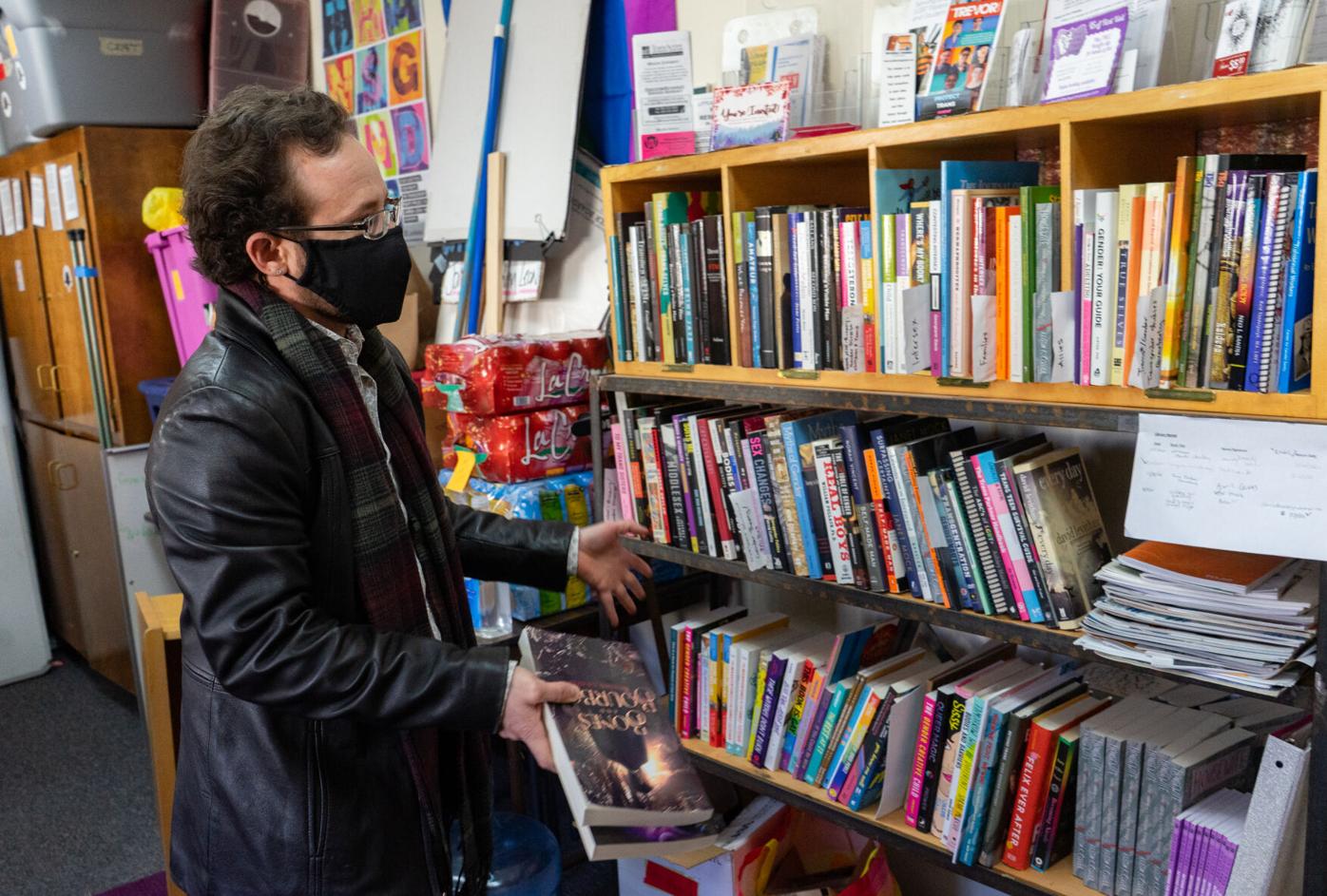 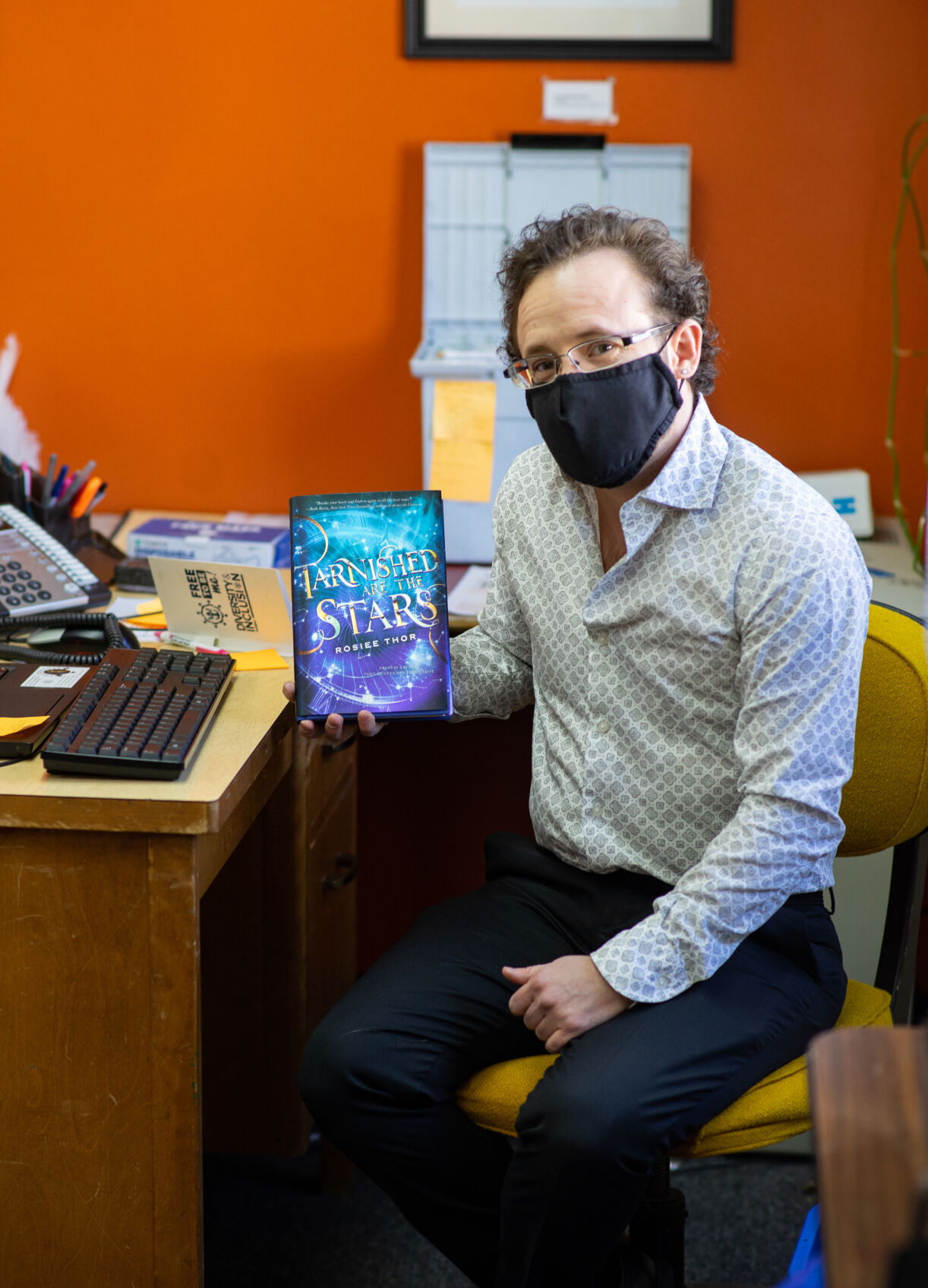 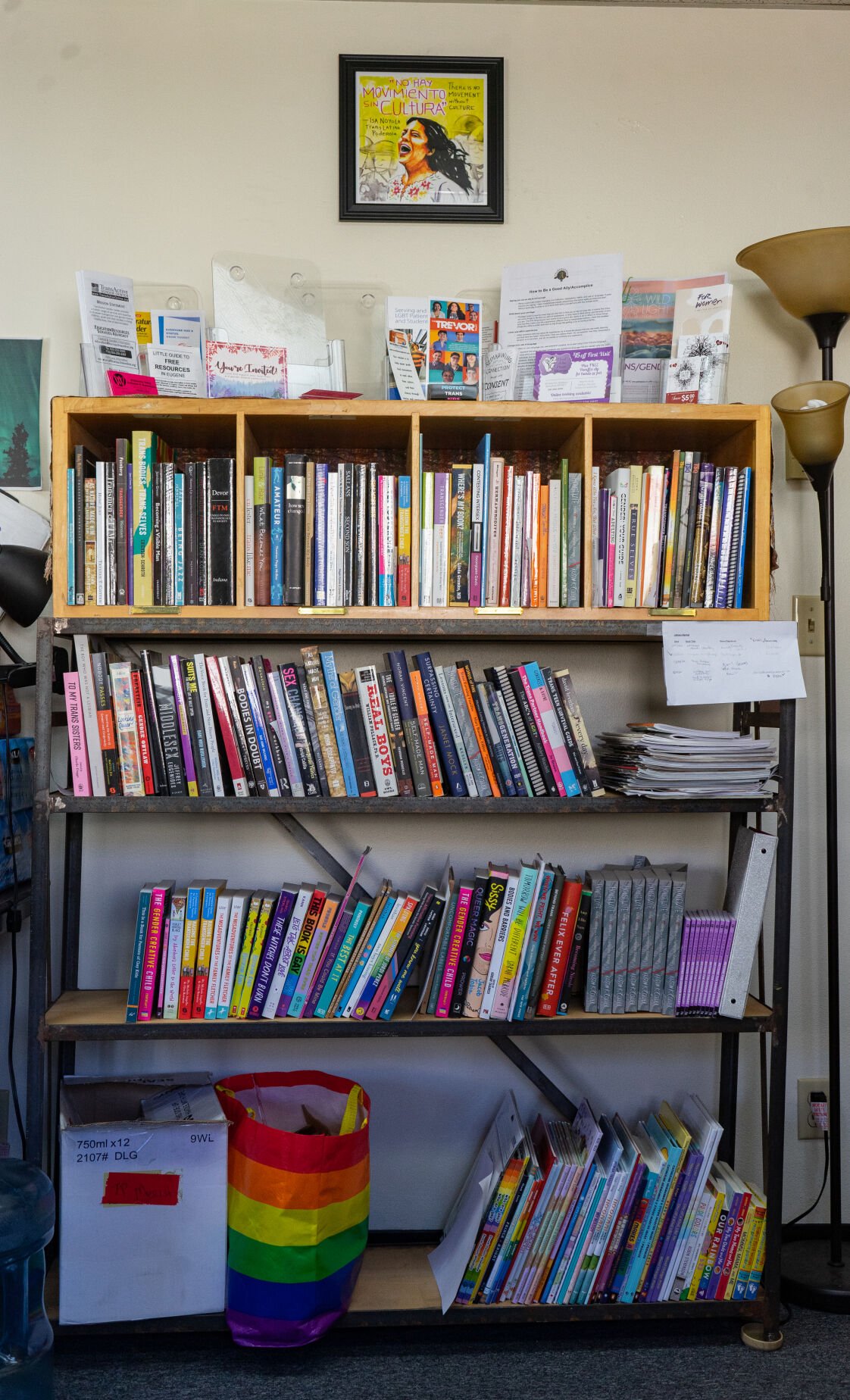 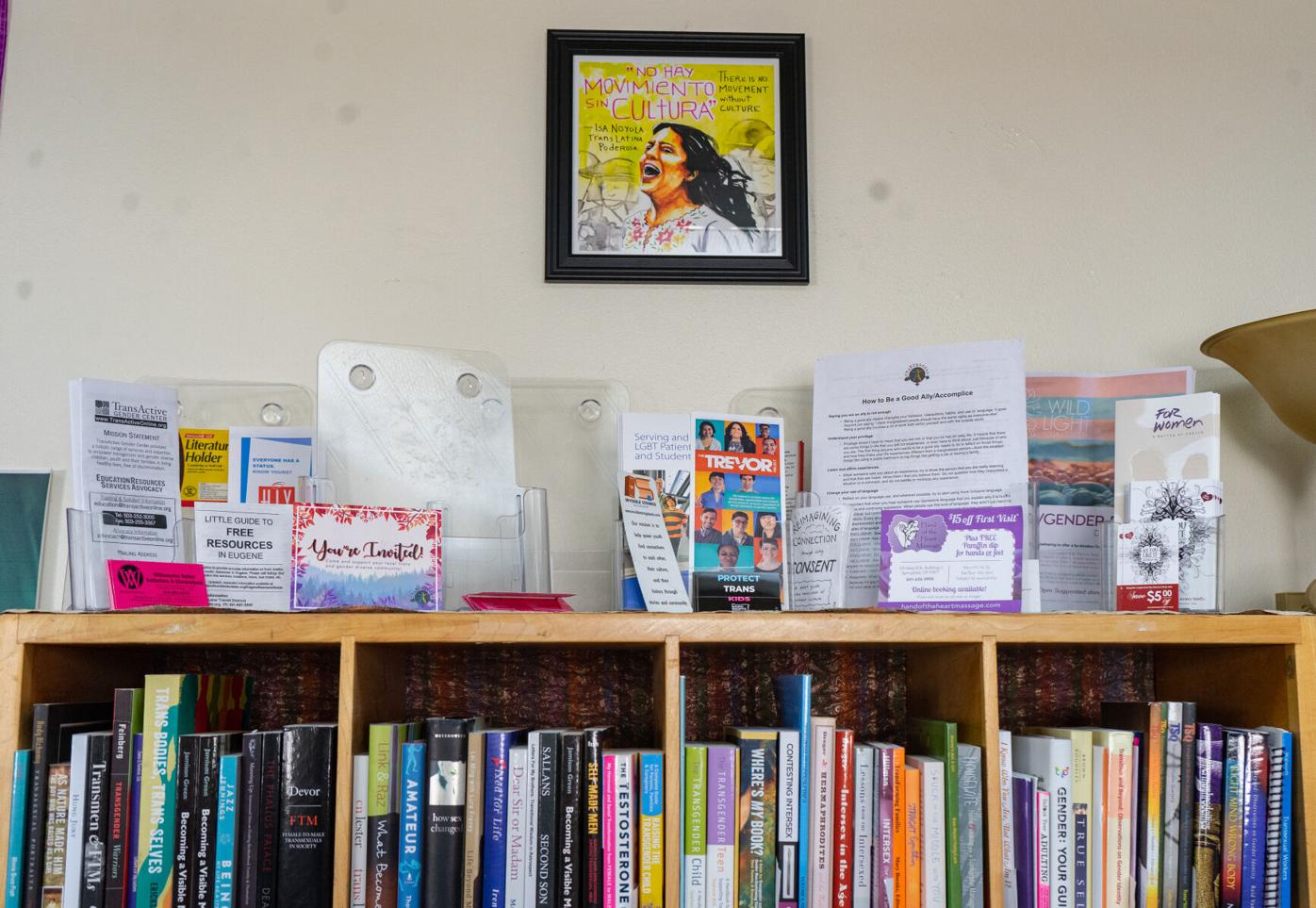 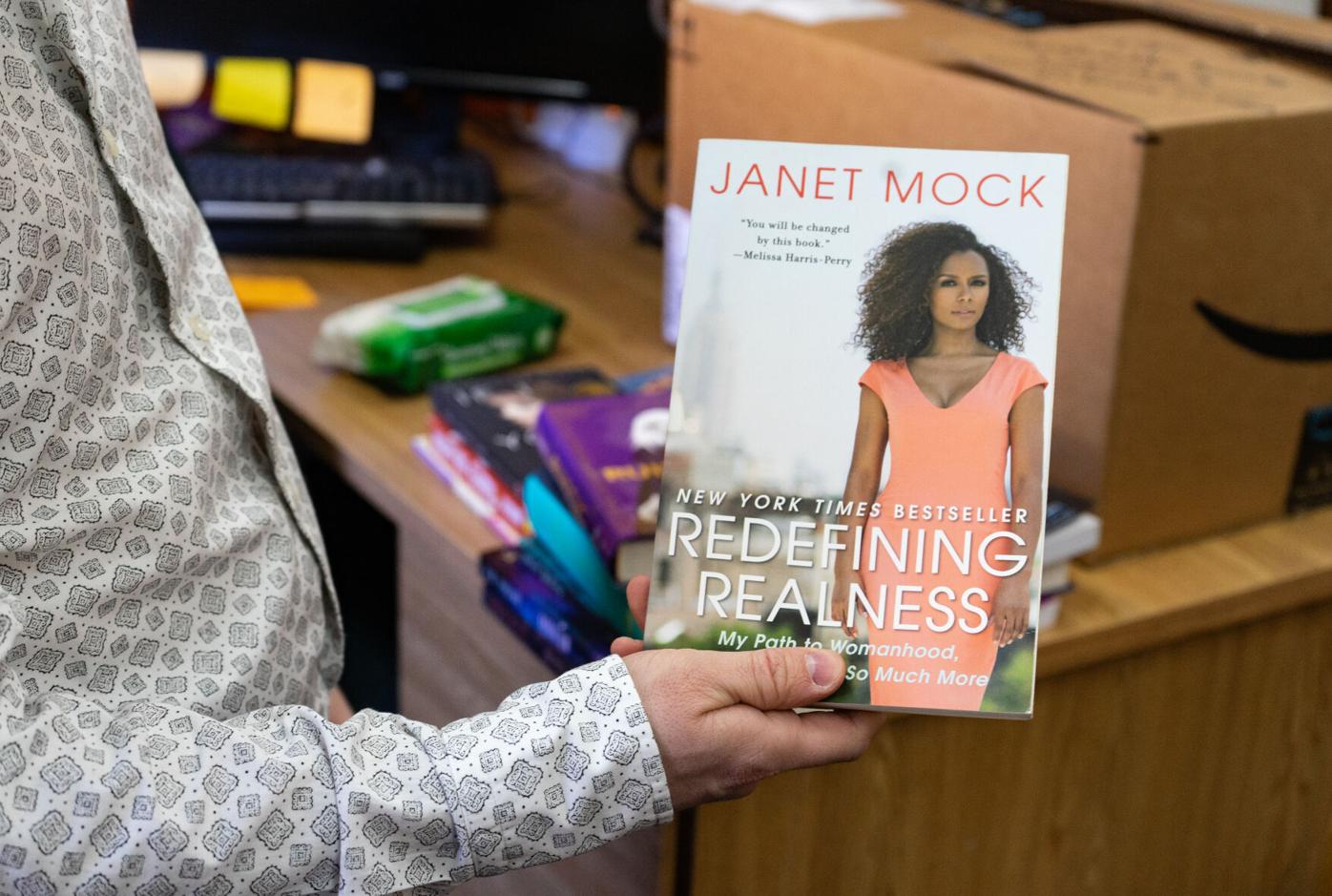 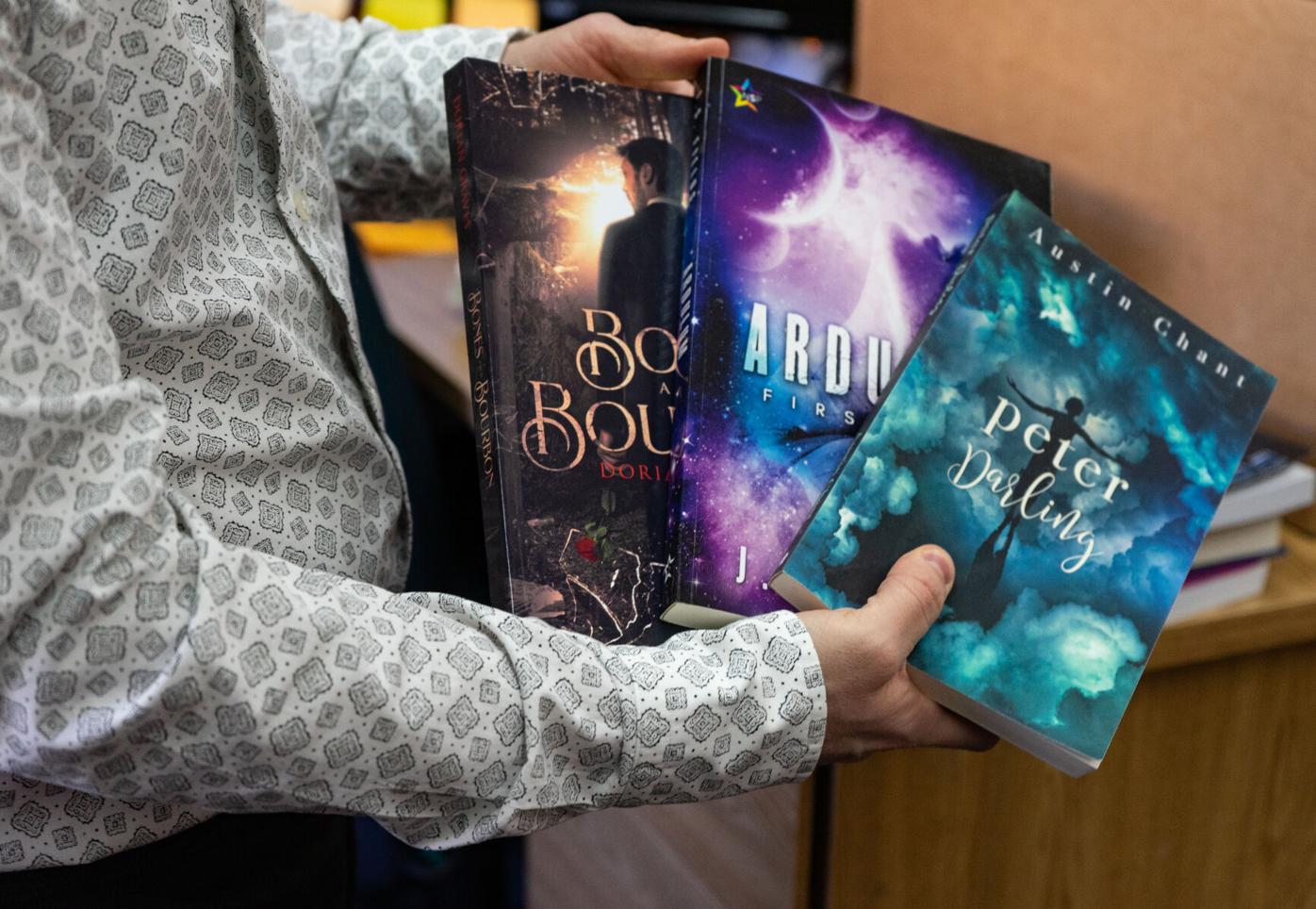 Ben Brock displays a few books that were recently discussed by the book club that he leads. TransPonder, a local nonprofit organization in Eugene, Ore., hosts weekly book club meetings that focus on trans and gender-diverse literature. (Summer Surgent-Gough/Emerald) 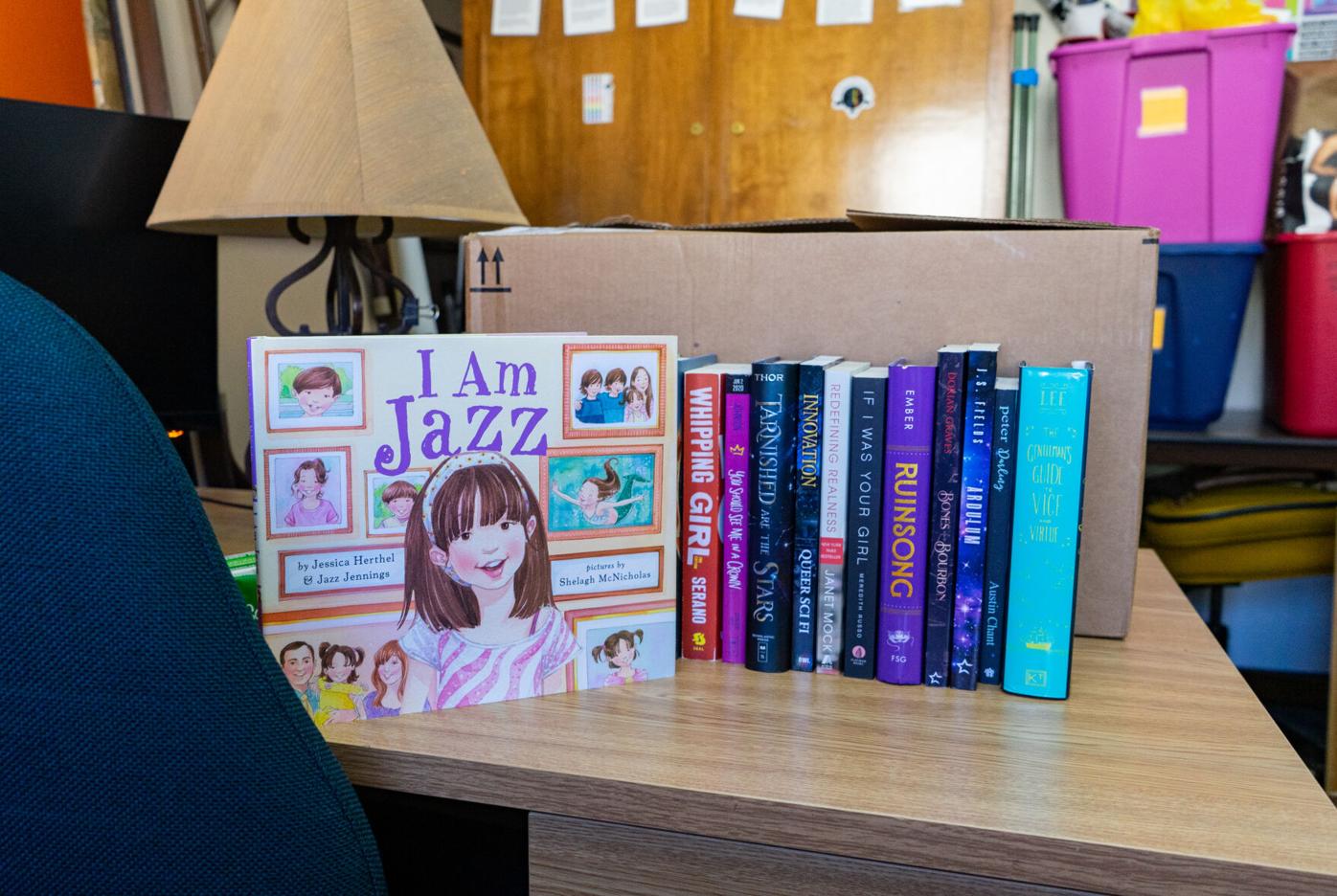 Books that the TransPonder book club has recently read are displayed on a desk in the office. TransPonder, a local nonprofit organization in Eugene, Ore., hosts weekly book club meetings that focus on trans and gender-diverse literature. (Summer Surgent-Gough/Emerald)

Ben Brock displays a few books that were recently discussed by the book club that he leads. TransPonder, a local nonprofit organization in Eugene, Ore., hosts weekly book club meetings that focus on trans and gender-diverse literature. (Summer Surgent-Gough/Emerald)

Books that the TransPonder book club has recently read are displayed on a desk in the office. TransPonder, a local nonprofit organization in Eugene, Ore., hosts weekly book club meetings that focus on trans and gender-diverse literature. (Summer Surgent-Gough/Emerald)

With every point of conversation, protest and injustice that was unpacked, explored and re-surfaced these past few years, individuals have learned new methods for advocating and educating themselves on social issues impacting our world — whether that be joining picket lines, speaking up on social media or opening up a book.

Book clubs are the centerpiece for communities gathering together, reading a good book and learning from one another. It is a plus when they provide a space for thoughtful discussions on social justice issues and activism. These three local book clubs take a deeper look into racial justice, gender issues, LGBTQIA+ representation and much more.

In early 2017, just after former President Donald Trump's inauguration, Kristine Chadwick, a founding member of the South Willamette Valley Chapter of the National Organization for Women, had a growing appetite to expand her awareness of feminism. A book club seemed to be the perfect recipe to take a deeper dive into women's issues with other feminists, and thus the Bibliofemmes book club was baked. The group reads literature of all genres with a focus on women's issues and feminism.

The club took a bit of a hiatus during the pandemic. Since December, the group has dived headfirst into dissecting books such as “Hood Feminism” by Mikki Kendall, “The Henna Artist” by Alka Joshi and “Educated” by Tara Westover. Group member Susan Wigget said the discussion around “Hood Feminism” was enlightening, and the participants discussed mainstream feminism from multiple perspectives.

Wigget said, “Bibliofemmes has impacted me because it's wonderful to socialize with a group of feminists. It's an accepting group. It's also insightful to hear their perspectives.” Wigget calls the discussions “consciousness raising sessions,” as the group’s conversations tend to raise people’s awareness on social justice issues, and oftentimes she is influenced to do outside research on topics touched on during the book club.

The group meets monthly; at the start of each meeting members check in with one another before jumping straight into a round table discussion answering the questions like, "How did this book hit you and what was the major impact of the book?" Chadwick said. Then the group has the opportunity to have an active and open discussion about feminist issues, connections to current events or to mention a certain theme, plotline or character that was a page-turner.

After every discussion, Chadwick said she hopes participants leave with a well-rounded perspective on issues facing women globally, “from people identifying as women, within the United States, from all different backgrounds and cultures, and understand what are the issues that face us in trying to achieve equality."

Sit Down & Speak Up

Midge Greentree, a teacher, started the Sit Down and Speak Up book club to discuss the books she was reading. After no luck in her small, rural town, Greentree relocated the book club to Eugene to try to meet with more "progressive readers." The group soon blossomed in size, and members would meet at a local coffee shop, sipping their respective drinks and dissecting books of all genres that centered around the human condition and social justice.

Since the pandemic began, the group migrated to coffee over a digital screen, but Greentree said to Emerald staff in an email, "our online discussions continue to offer meaningful insights through varying perspectives, but we all look forward to the days ahead when we can connect in person. There's something to be said about sharing the same space with others. It's intimate and inclusive, and I think it invites us to share even more. "

The book club exists to create opportunities for compassionate conversations about various social justice topics. Greentree said the group reads and discusses books to broaden their perspectives and deepen their understanding of the human condition. Participants explore books taken from historical accounts to present-day views found in fiction and nonfiction— each book selected by the club centers around human rights, progressivism and human kindness.

Gail Pearlman, a member of the book club, likes how the club exposes her “to reactions to the same book that were different from my reactions. The group recently read “Kindred” by Octavia Butler, and Pearlman said, "It did a good job showing the horrors of slavery by contrasting present and past." But another member thought that the book was poorly written which gave her another point-of-view to think on.

The round-table style discussions mimic the club’s name — participants sit down and speak up. The conversations lend the time and space for group members to share their diverse, critical and intimate takeaways. "In short, we read books with topics and themes that are worth thinking about and talking about in order to better understand ourselves and, in turn, others,” Greentree said. “This is what reading does for us. It changes us."

The TransPonder book club is an extension of TransPonder, a grassroots nonprofit based in Eugene that is completely transgender-led and founded and provides support, resources and education to transgender and allied community members. A product of the pandemic, the book club has provided a space for Eugene community members to meet and share thoughts about LGBTQIA+ literature and representation.

"I think everyone has a personal reason which draws them to our book club, but I can safely say that we all really enjoy reading and discussing literature," Ben Brock, social media coordinator for TransPonder, said to Daily Emerald in an email.

The club flip-flops from fiction to nonfiction, and the TransPonder participants talk about "nearly everything," Brock said. Every Tuesday, the discussion topics focus primarily on the books, trans/gender diverse media issues and the good and bad of representation. But there is also room to delve into each other’s experiences, how a book impacted a participant and even what’s going on with their personal life.

For Karon Barter, the book club feels like a group of friends meeting up once a week and is a transformative part of their self-discovery journey.

"There's real value in having a safe space where you don't have to worry about people criticizing you for thinking or wondering something," Barter said. "I guess it boils down to it's not safe to have all these discussions with everybody, and so here's a safe place where it's okay to have them."

All and all, the Transponder book club is not only a way for participants to add a few new authors and titles to their bookshelves on trans/gender issues — it’s a place of belonging.

"My goal with our book club is to create the possibility of a space where you can have a deeper connection to our community,” Brock said, “and that by the end of every book club meeting you will feel that you are not alone."

One of the best things about books is their ability to help readers empower themselves and others with their content. These three book clubs show that no matter their size or the monthly book, collective discussions are functioning as a tool to transform the way communities discuss and advocate for social justice — and it starts with page one.

Mia Ryder-Marks (she/her) writes about books for the Arts & Culture desk at the Emerald.