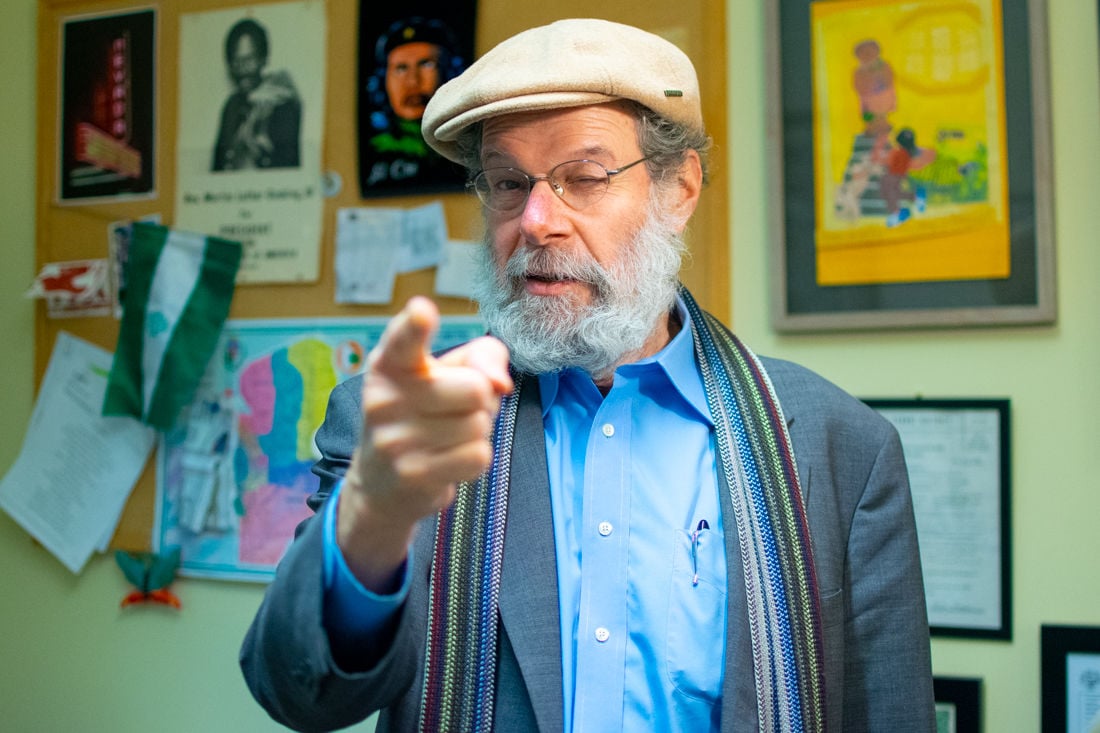 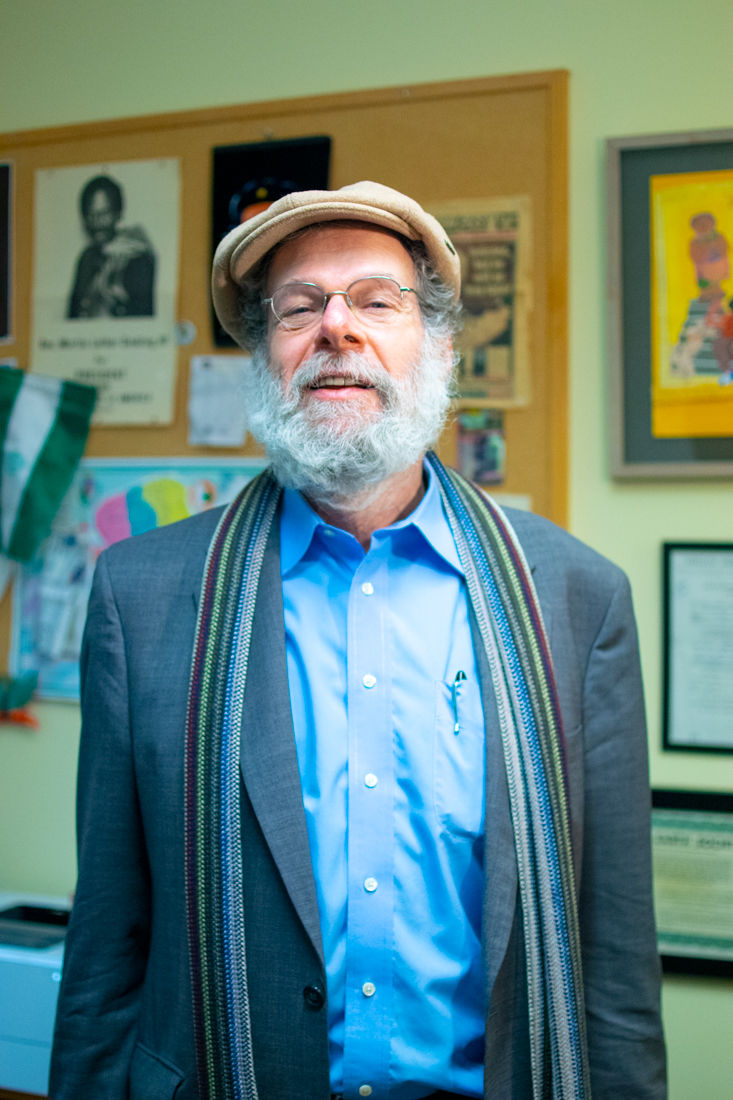 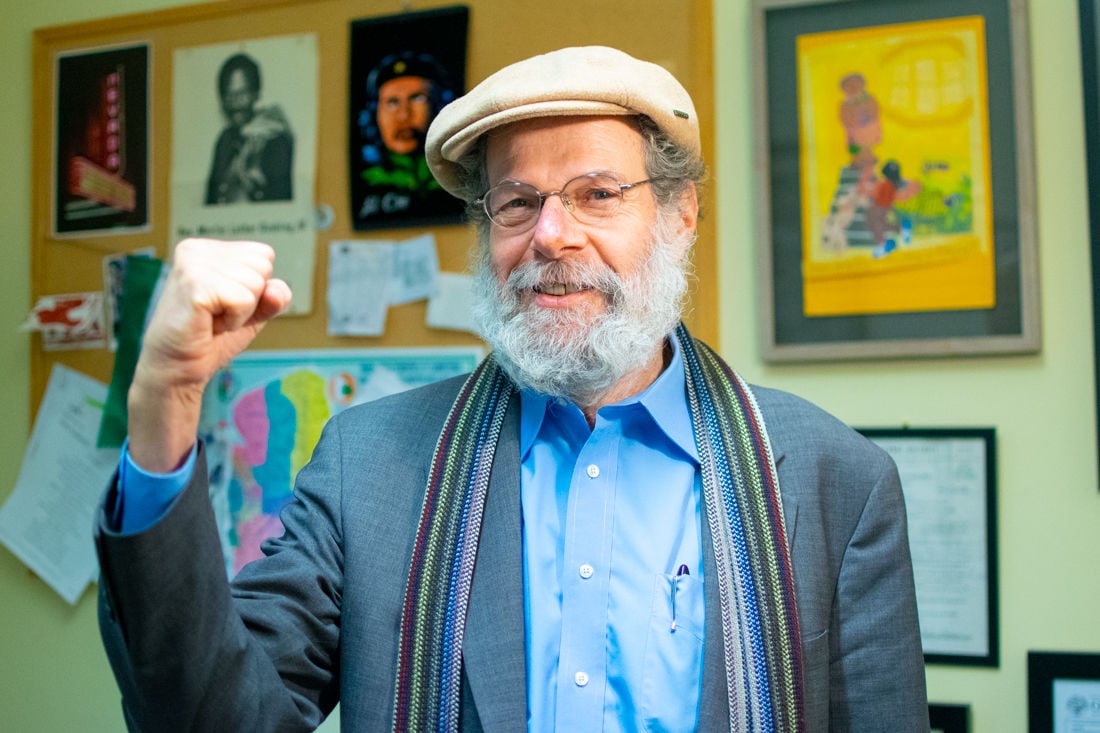 Correction on the morning of Thursday, Feb. 20: A previous version of this article incorrectly referred to the country of Ethiopia as "Indiopia." The error has been corrected.

Peter Laufer, a professor at the University of Oregon, is releasing his newest book titled “Up Against the Wall.” The book, which will take a hard look at both the history and the current state of borders and walls separating people and cultures worldwide, will hit store shelves in late July.

Laufer is many things — an author, an award-winning journalist, a documentary producer — but a man of few words isn’t one of them.

He spent years as a radio broadcaster before becoming a professor, and his signature newsboy cap and wire-rimmed glasses combined with a soft voice that draws listeners in remain from his time working as a radio voice.

Even after becoming a professor, Laufer has continued his journalistic work as an author and has written over 20 different books ranging from “The Dangerous World of Butterflies” to “No Animals Were Harmed: The Controversial Line Between Entertainment and Abuse.” Along with animal rights, Laufer also holds a strong interest in the ideas and realities of borders and identity.

“Borders, identity and migration intrigue me, and it probably dates from my father being an immigrant to this country from central Europe and having grown up with him talking about not just the immigrant experience but what he considered was the value of his citizenship in this country because he chose to come here whereas one could argue my citizenship is an accident of place of birth,” Laufer said. “But also as a Californian, I related to the border as a place of differentiation.”

As for how the title of the book came to be, he said that the term “Up against the wall” was a piece of history.

“‘Up against the wall’ can be traced back to the Newark police department back in the 60s when they were rousting people and arresting them, and it was co-opted by people as a rallying cry,” he said.

This isn’t Laufer’s first book about borders. “I’ve been researching the Mexican border for various purposes for years,” Laufer said. “When I was an NBC news correspondent, I reported from the border and I’ve written a couple of books that deal specifically with the US-Mexican border.”

One of Laufer’s previous books, “Wetback Nation,” drew widespread attention because of the title. Laufer was invited onto the Bill O’Reilly Show on Fox News, but Laufer suggested that he wasn’t sure if the producers of the show had read the full title of the book before inviting him on.

“The book came out and I imagine the sensational title drew the attention of his producers. The subtitle was “The Case for Opening the Mexican-American Border,” and he may well have been surprised when I was live on air with him to hear me vociferously calling for an opening of the border. We had an interesting debate —  which I won,” he said.

Laufer continued by saying that one of the reasons he was writing the new book was because of what’s currently happening along the Mexican-American border.

“I feel strongly that there needs to be positive productive attention to what’s going on at the border, particularly in the current era when what I consider to be criminal abuses by the Trump administration are being perpetrated,” Laufer said. “To have a voice drawing attention to the problems of the border and how they are exacerbated by the Trump policies, as well as the joys of the borderlands and the richness of that culture and how we benefit from it — those are some of the things that drive me.”

What separates Laufer’s work from other authors’ is the journalistic way he tackles the research on the ground.

He has visited borders and walls all over the world and has traveled to the wall being built along the US-Mexico border to research for the book.

“I have probably traveled to every continent except Antarctica looking at walls and how they have and have not worked,” he said. “We have more walls defining the borders of nations today than when the Berlin wall fell in 1989.”

But when asked if he’d prefer a borderless or wall-less world, he said the answer to that question was much more nuanced.

“You probably have a door on your house, and you probably lock the door at night, especially in Eugene. Walls serve a purpose,” Laufer said. “What doesn’t serve a purpose is trying to stop human migration. We have been migrating since we came out of what is now known as Ethiopia and the Rift Valley and we will migrate for economic and social reasons, no matter what kind of walls we put up to try to stop it, and that is the kind of wall I oppose.”