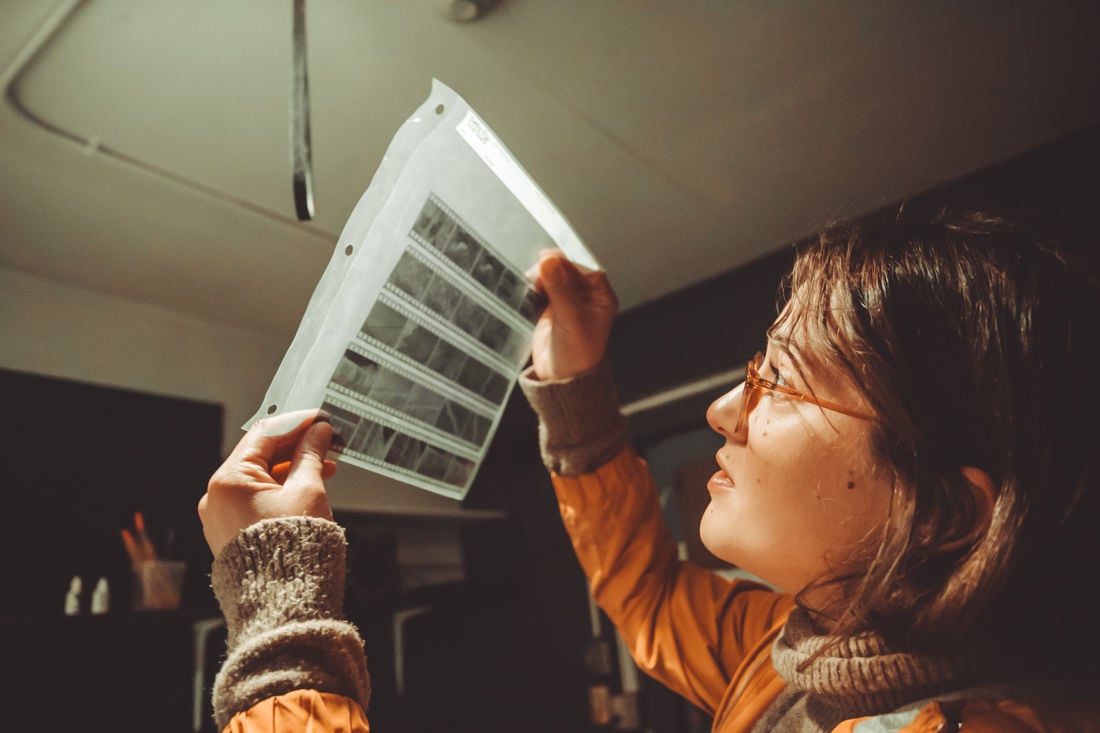 Eugene Darkroom Group's secretary Jamie McDonald views negatives through the light. The tangibility of film as a medium over digital photography is something that appeals to Eugene's analogue artists. (Sarah Northrop/Emerald) 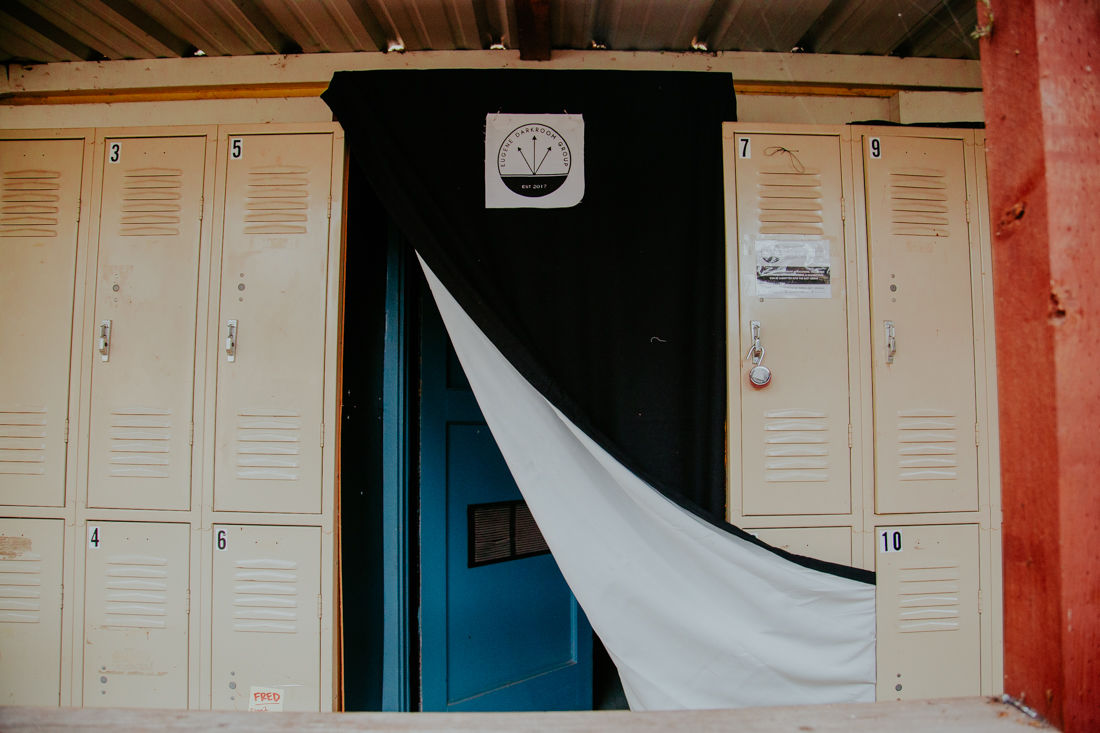 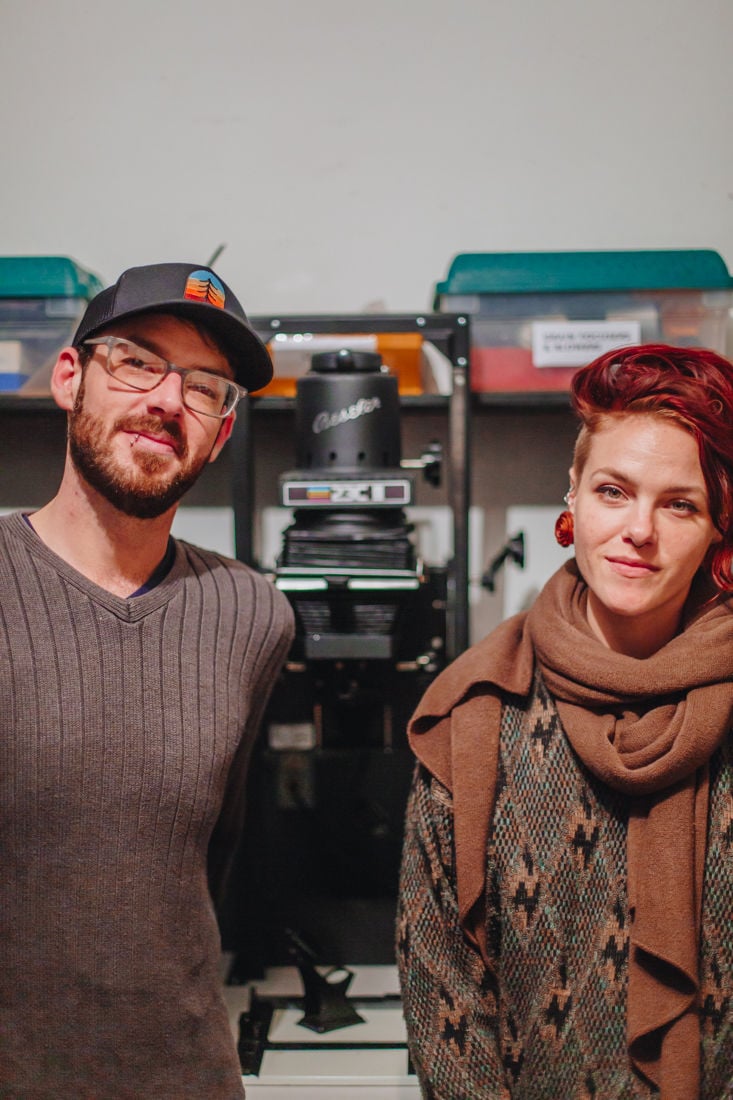 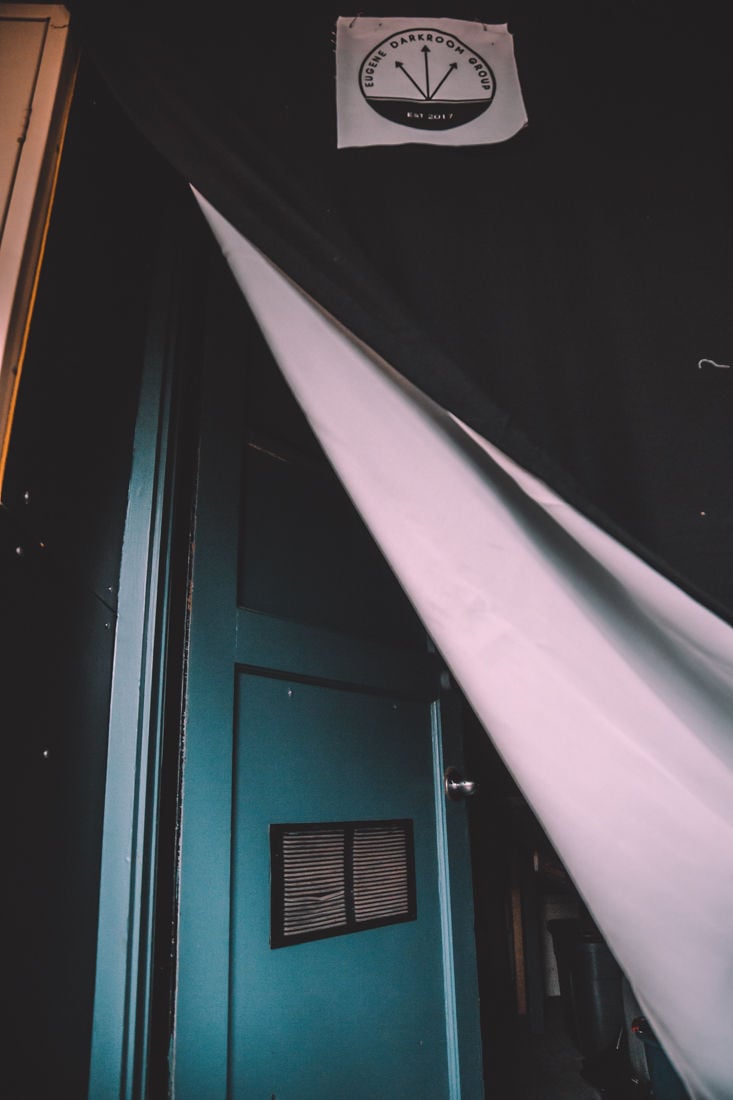 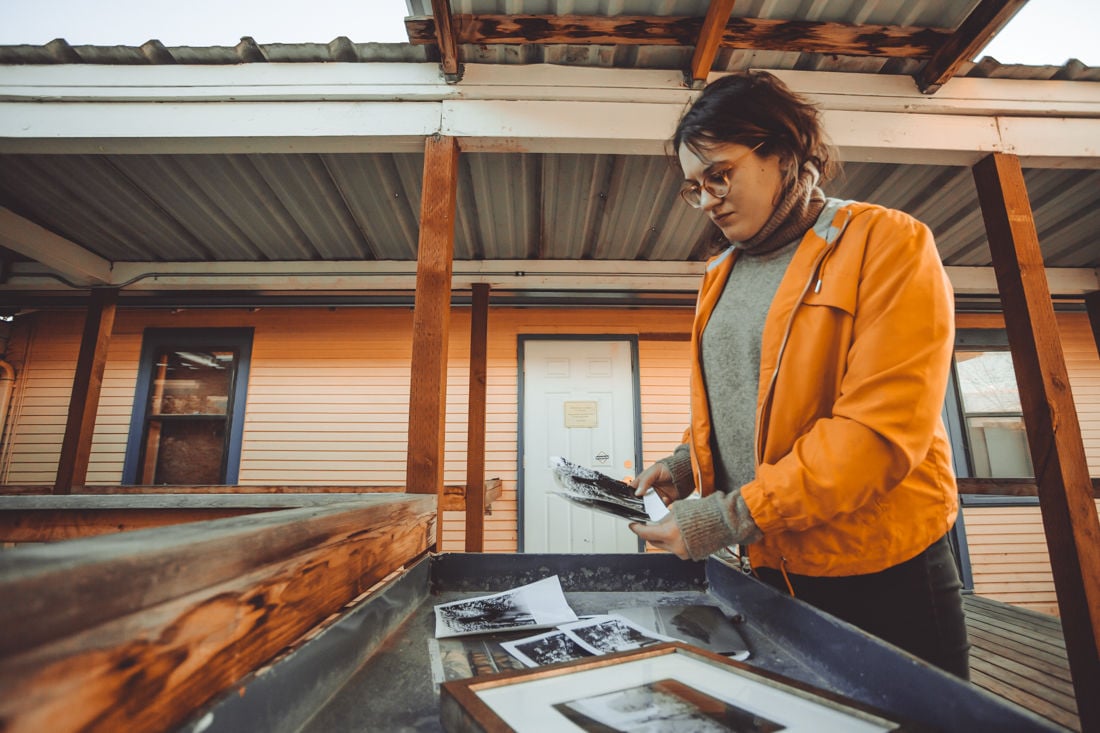 EDG secretary Jamie McDonald looks through some of her film artwork outside the darkroom at Maude Kerns Art Center. In a 2017 interview, McDonald explained that part of EDG's mission was "to respark the love for film." (Sarah Northrop/Emerald) 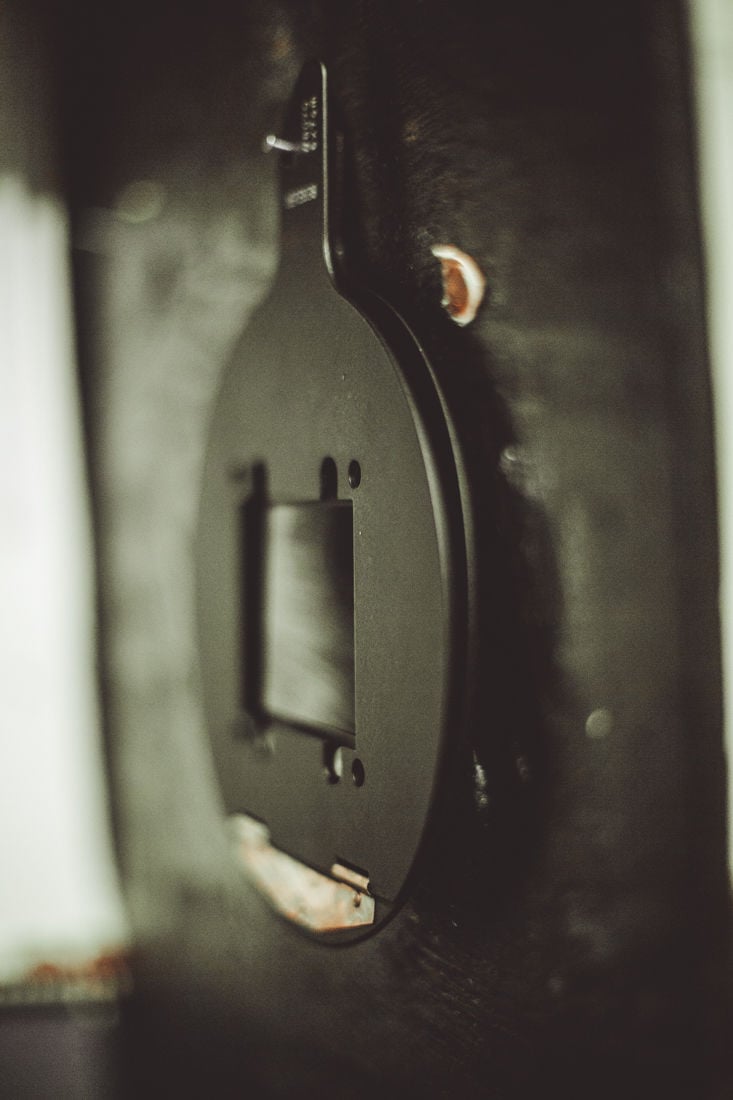 Negative carriers are used to insert a negative into an enlarger. The different sizes are used for different formats of film. (Sarah Northrop/Emerald) 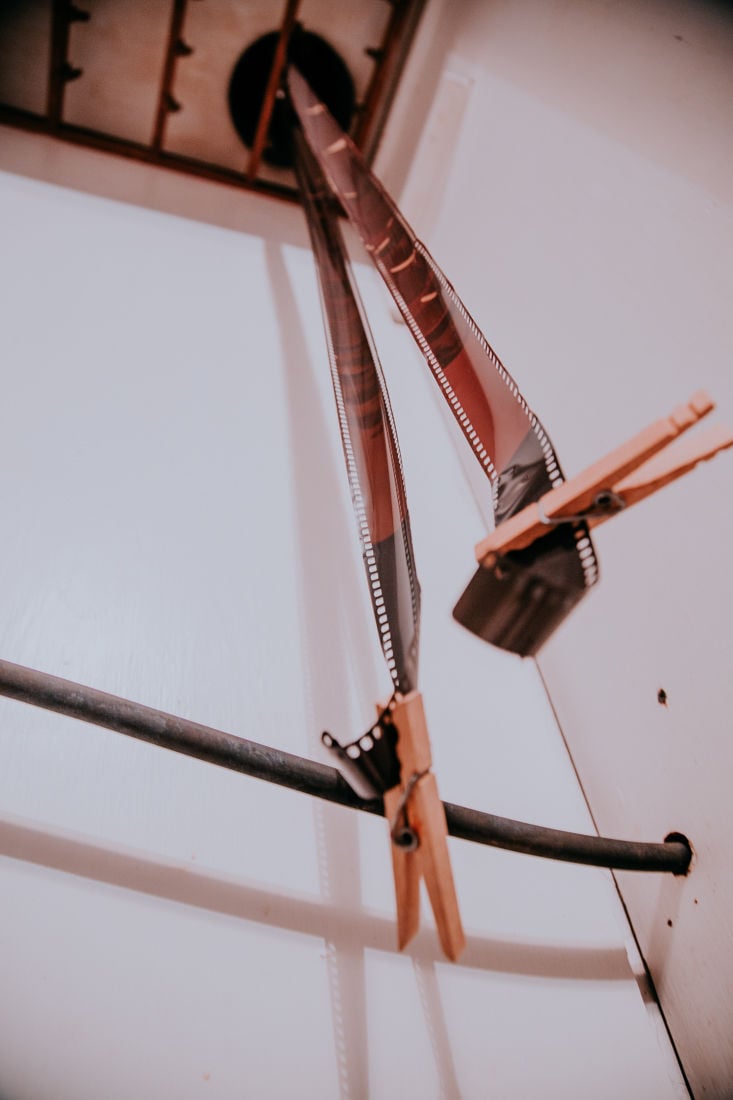 Imperfected developed rolls of film hang up to dry inside EDG's darkroom. Both film and paper go through a developing, stopping and fixing process. (Sarah Northrop/Emerald) 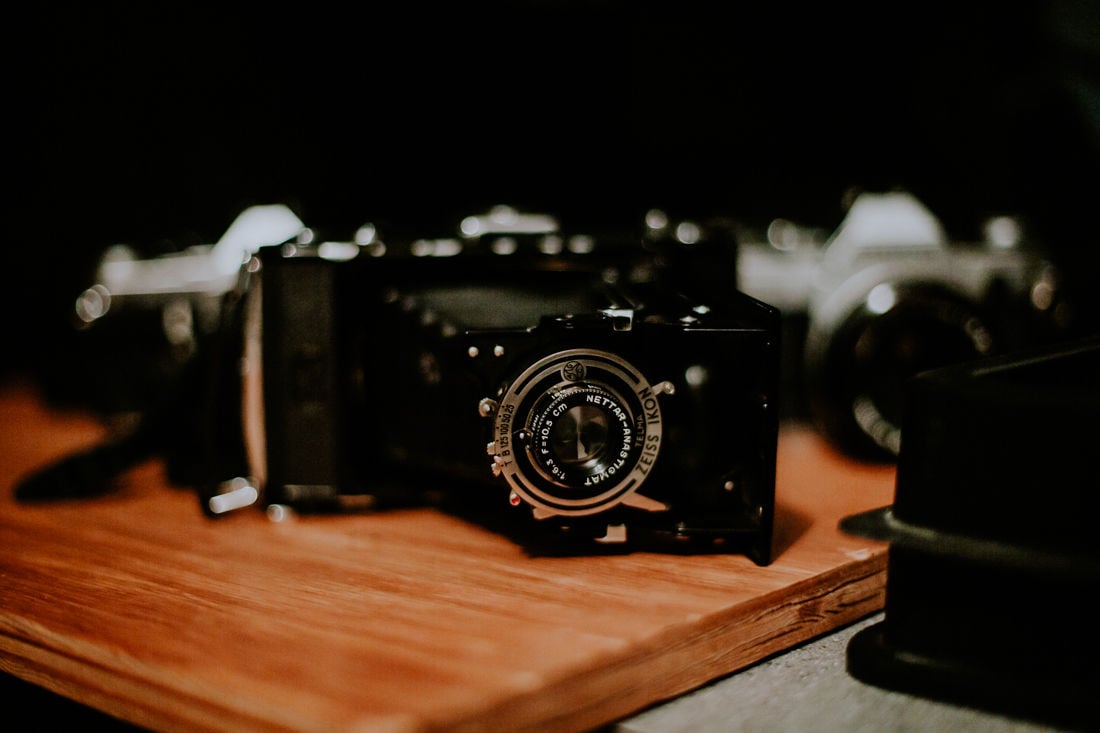 An array of EDG's members' film cameras rest in the darkroom. Certain film cameras can be much less expensive than the digital alternative –– making film and darkroom a more accessible medium for artists. (Sarah Northrop/Emerald) 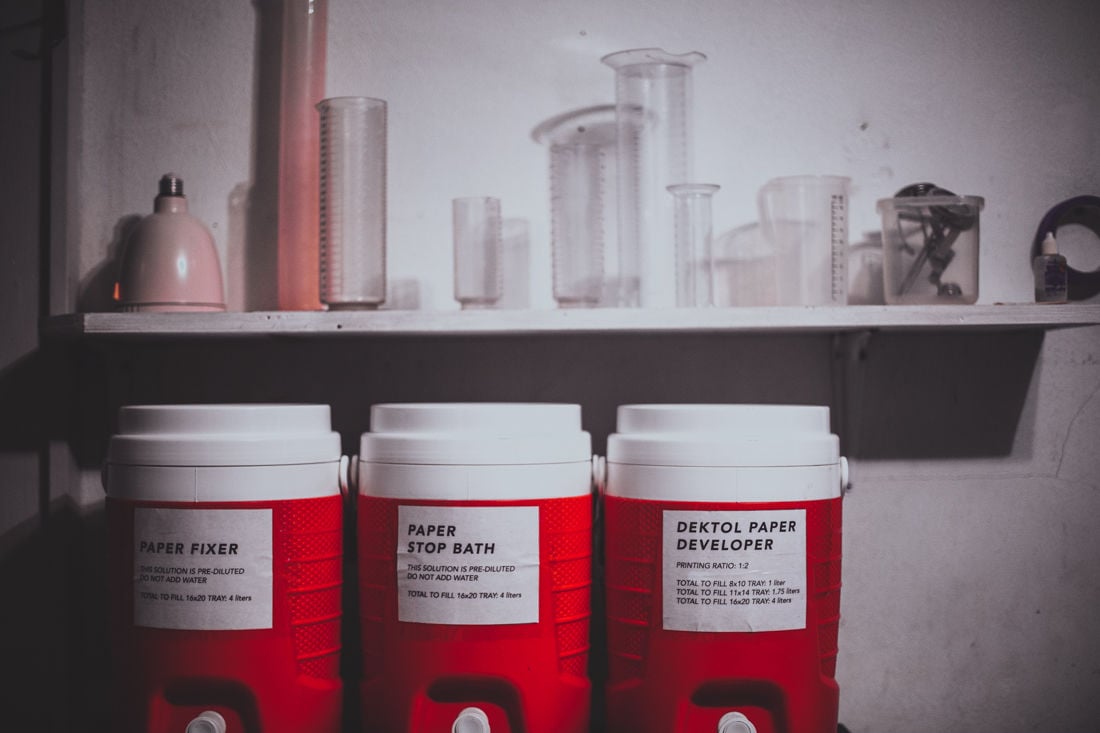 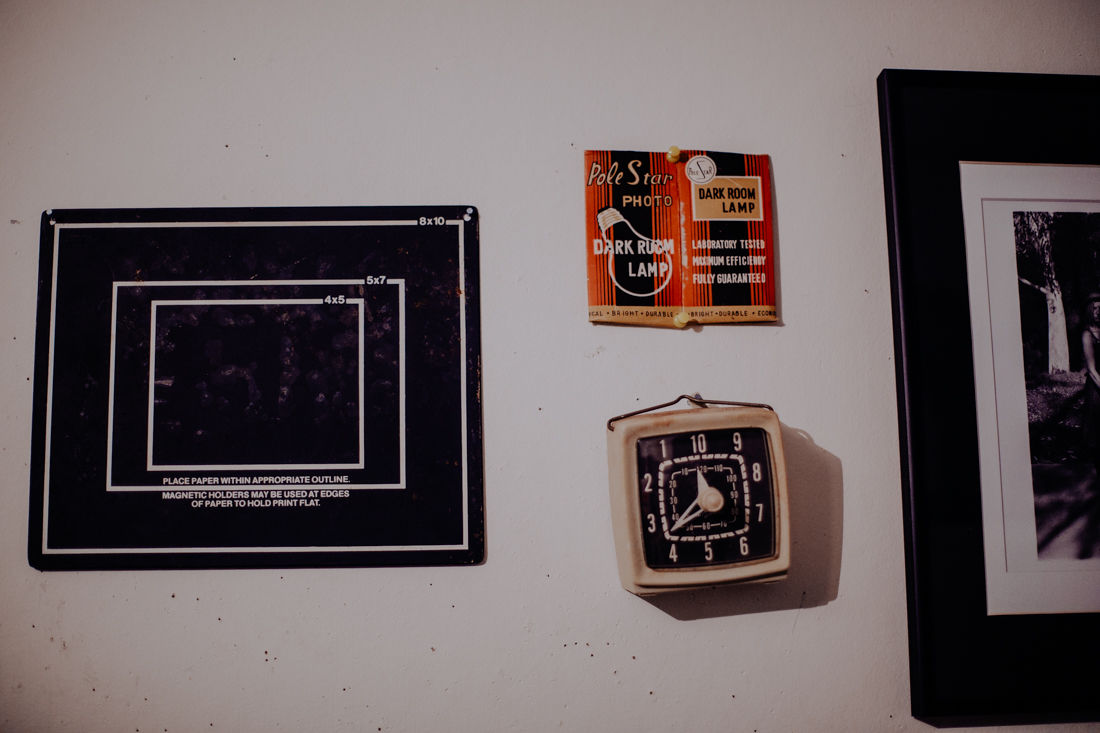 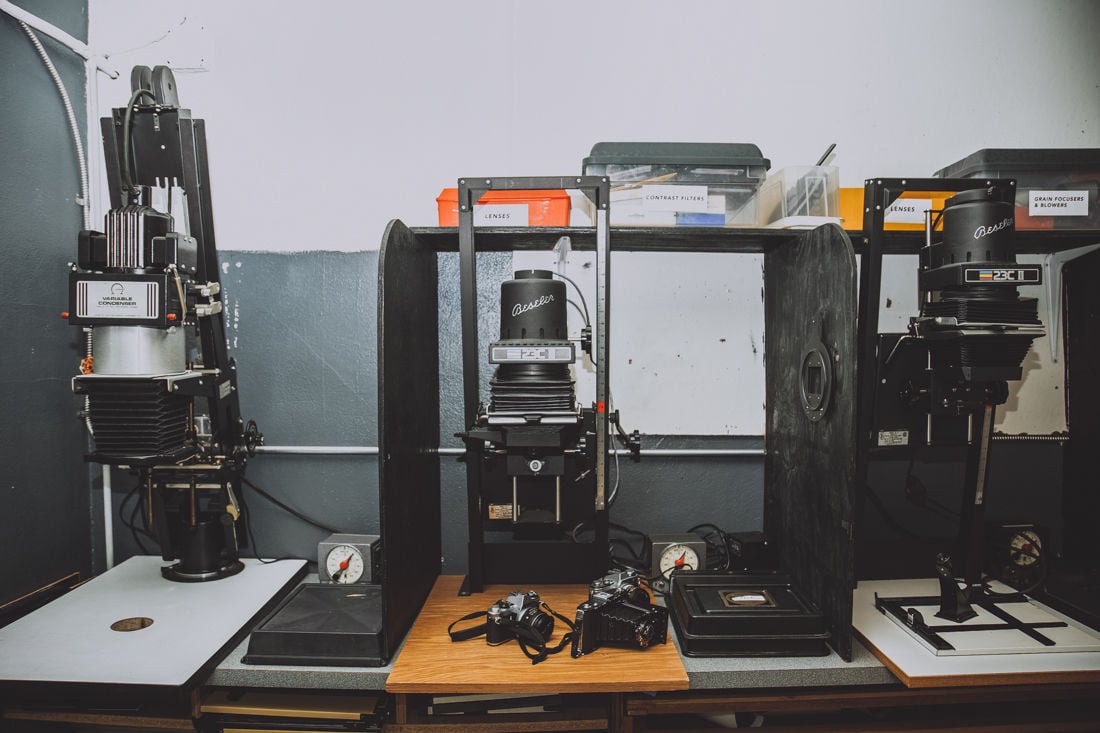 Enlargers are a darkroom tool used for projecting and exposing a film image on to photo paper. When submerged in developer, a chemical reaction takes place in the particles of the paper, and an image begins to fade into view. (Sarah Northrop/Emerald) 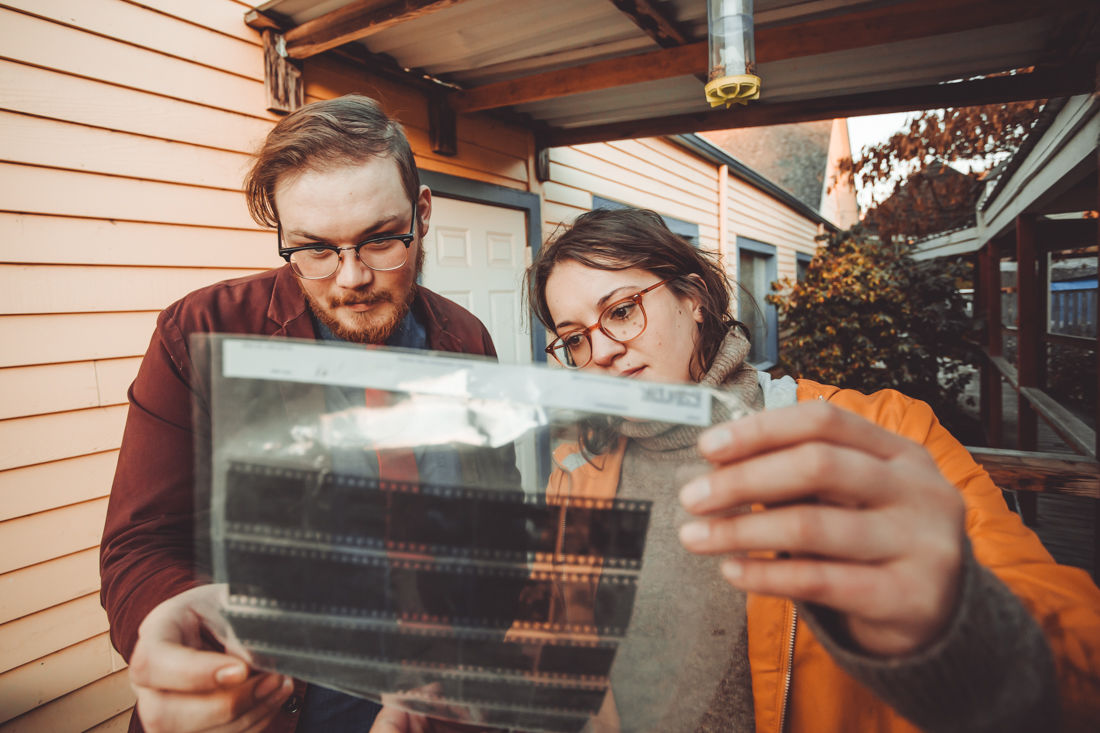 Eugene Darkroom Group's secretary Jamie McDonald views negatives through the light. The tangibility of film as a medium over digital photography is something that appeals to Eugene's analogue artists. (Sarah Northrop/Emerald)

Enlargers are a darkroom tool used for projecting and exposing a film image on to photo paper. When submerged in developer, a chemical reaction takes place in the particles of the paper, and an image begins to fade into view. (Sarah Northrop/Emerald)

Tucked away behind a black curtain in the courtyard at Maude Kerns Art Center is a tiny room red-lit by a single light fixture. Peeling away the curtain reveals an analogue paradise within Eugene’s film photography community.

An effort started by a group of Lane Community College photography students to find a new home after the closing of their darkroom led to the 2017 formation of Eugene Darkroom Group. EDG is a nonprofit whose goal involves cultivating a community of film photographers in Eugene while raising money for a centralized darkroom –– a place where chemical processing breathes life into film negatives. Now, the creation of that darkroom has finally seen the light.

“We were a group of friends who wanted to put some enlargers in any space we could find,” said Jesiah Hallford, EDG’s president and founder. “Our goals weren’t that personal, it was community-oriented. We wanted to create a space where people could create, do gallery shows, we wanted to educate through classes.”

By the end of their time in school, Hallford and company had taken every photography class available. The LCC space had become a second home and a sense of community emerged where lifelong friendships were built in the walls of the darkroom.

As the students neared graduation, the LCC darkroom faced closure. The community they built was destined to split up and relocate — a casualty of the college town. Add in the advent of digital photography and the darkroom appears to become obsolete — a dying art form meant for purists and those who relish in nostalgia.

In an effort to keep a vibrant darkroom culture alive, Hallford set off on a mission to create a new space for film. This idea was much bigger than the aging art of processing photos. It was about creating a space for people to come together and connect over art and photography. Instead of mourning the end of an era, Hallford began to plant the seeds that would eventually sprout the Eugene Darkroom Group.

After years of work and a false start, the nonprofit EDG had its grand opening at Maude Kerns Art Center last Friday.

The road to a permanent location at Maude Kerns wasn’t always paved, though. In fact, the first iteration of the EDG darkroom was located in the garage of a member’s aunt. It wasn’t the quality the group had been used to, but it accomplished what they needed and it gave the artists a platform to continue their work in the meantime.

But after a while, there were problems. Some of the original members had found opportunities elsewhere and had moved or planned on moving. Without school as the great unifier, people’s paths began to diverge, and the darkroom was set to disband once again.

The dream never died for Hallford, though. For him, the idea meant something to the community at large. During a 2017 interview, when EDG was just beginning to put itself on the map, Hallford told Ethos, the Daily Emerald’s sister publication, that he wanted the organization to become a hub for existing film communities, connecting all kinds of film photographers.

“It's about sharing skills, resources, ideas and critiques for each other,” Hallford said. “It's a safe space where photography can remain relevant in the 21st century.”

EDG’s community value keeps the group non-competitive and allows for a diverse group of artists to thrive from learning from each other.

To take EDG from an idea to an established entity, Hallford reached out to a local non-profit attorney, who said the group characterized a nonprofit where members were teaching other people while learning from each other — EDG took off from there.

“We really began to realize we could create something that’s for more than just ourselves,” Hallford said.

EDG began putting on gallery shows that featured photography from a wide range of artists with varying experience and skill levels. One of these artists was then-novice and now-EDG secretary Jamie McDonald, who met Hallford at a bar and has since seen EDG’s darkroom goals come to fruition.

In 2017, EDG gave McDonald the platform she needed to hone her craft. “The group can be a good way for people to really explore that as an outlet and a way to have a new creative interest and hobby and not feel intimidated or bad about it,” McDonald said at the time. “Everybody has to learn at some point.”

A few years later, McDonald now possesses a vast portfolio of film negatives, enlargements and framed work. As she laid out examples of her work on a table outside of the Maude Kerns darkroom, McDonald recollected EDG’s journey to this point. “It’s really cool to see this come together,” she said.

Over the entirety of 2017, EDG was able to present more than 50 pieces of art from over 25 different artists in order to raise money to pay the fees associated with becoming a nonprofit.

“We were combating the myth that film is a dying art form,” Halford said. “But, we couldn’t maintain that tight-knit community without building something.”

Despite its growing community, EDG still hadn't yet found an official darkroom. Members began looking around Eugene for potential spaces where they could build one. Hallford made an important discovery when taking a sculpting class at Maude Kerns:

“I remember leaving one day and noticing that they had a defunct darkroom,” Hallford said.

It was the perfect space. A historic darkroom, filled with equipment, located right in the middle of a nonprofit art center. Hallford began to visit Maude Kerns regularly, in hopes that his group could revive the space. After some discussion, Maude Kerns gave EDG the okay to move in — but because of legal work, they couldn’t immediately.

For some, the process wasn’t moving quickly enough and many board members had to move — including Hallford. The project once again began to fizzle out.

However, for EDG members like current Vice President Brenna Hansen and Darkroom Facilities Coordinator Brian Maneely, the project had only just gotten started.

Both Hansen and Maneely joined EDG after the group’s initial LCC days and weren’t ready to give up what Hallford had helped start.

The pair continued to maintain EDG and carried it through a significant portion of development. The goal of one day having a fully established darkroom wasn’t as far off as many of the members had thought. They developed their plan further, and had a blueprint for establishing themselves in Maude Kerns.

After hearing the plans, Hallford immediately moved back to Eugene to give EDG one more shot. When he returned, they moved quicker than before and explained their ideas for the space to those at Maude Kerns. The art center took them in with open arms, and the team began to transform the dusty, archived space into something operational.

Though its initial mission may have just been recently accomplished, EDG’s members feel there is still much work to do. While the darkroom is still growing, the community darkroom is only accessible to members as of November. Members are given surveys to find out ways the darkroom can be improved and the planned community education curriculum will begin in spring 2020.

“At this point in time, it’s a new learning phase,” Maneely said. “We are trying to manage all of the necessities. Whether it be through pricing, our availability, services or equipment, we want to be able to accommodate.”

Photography itself has a vast variance as far as personal technique goes, and one space needs to be accommodating of several artists with diverse styles and tastes.

“We all have our own process and our own style, and we can build off of what we know, but we can’t speak for everybody. That’s what the trial group is there for.” Maneely said.

Once the trial period comes to an end, the group anticipates it will have an appropriate grasp on how the darkroom should be run and plans to open up applications for new members. As of now, registration is set for Feb. 7, 2020. People interested can apply for access to the darkroom, and if accepted, can begin using the facilities by early May.

Eventually, EDG wants their community to extend throughout Eugene, Springfield, Coburg and beyond. They want their darkroom to be accessible to everyone, as EDG’s ultimate focus is building a foundation for artists to express themselves and equipping them with the tools they need to create.

“This is meant to be sharable and exportable idea,” Hallford said. “I want people to copy our idea, and continue building communities like this.”

Related (Ethos): Reviving a dark art: Film is not dead

I am an award-winning collegiate photojournalist based in Oregon and currently the photo editor of the Daily Emerald. I have a knack for visual aesthetics and can capture any subject with a similar beauty, drama and energy to the feeling of live music.