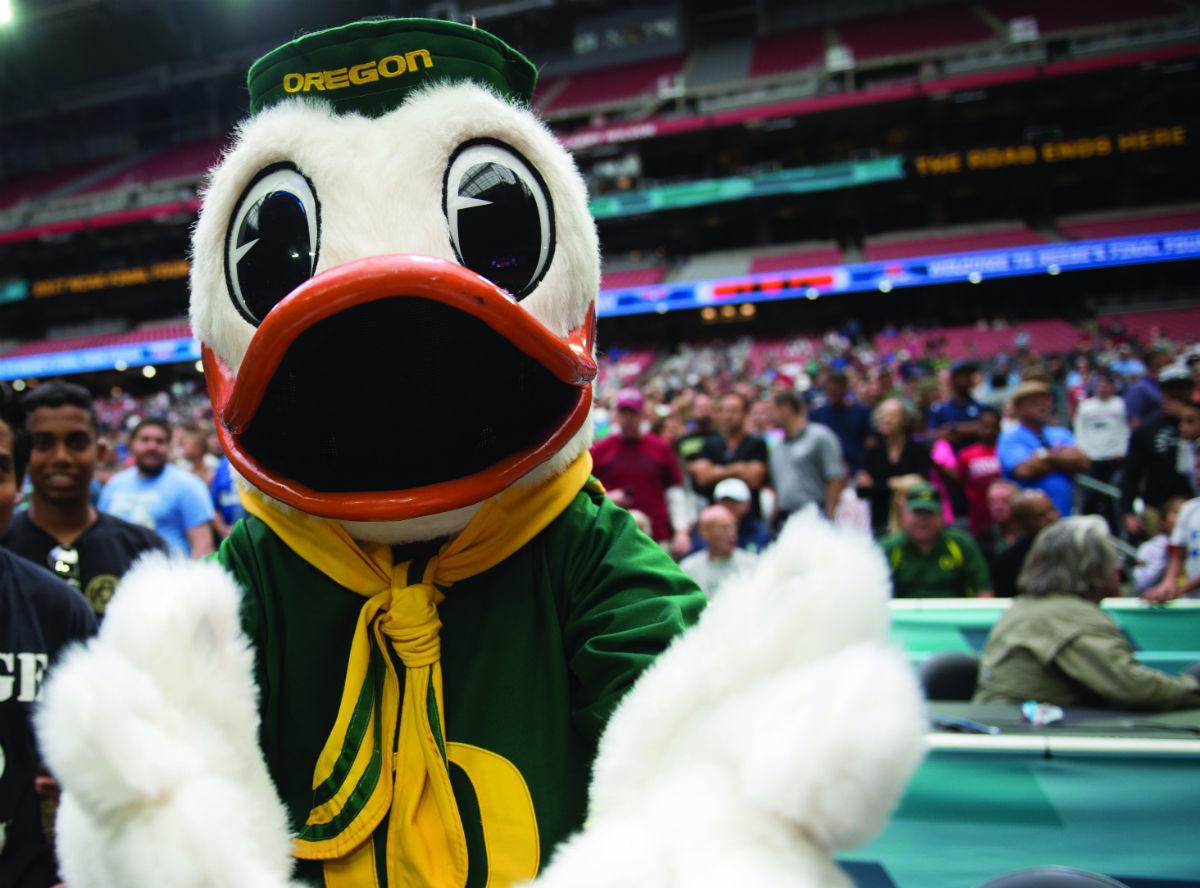 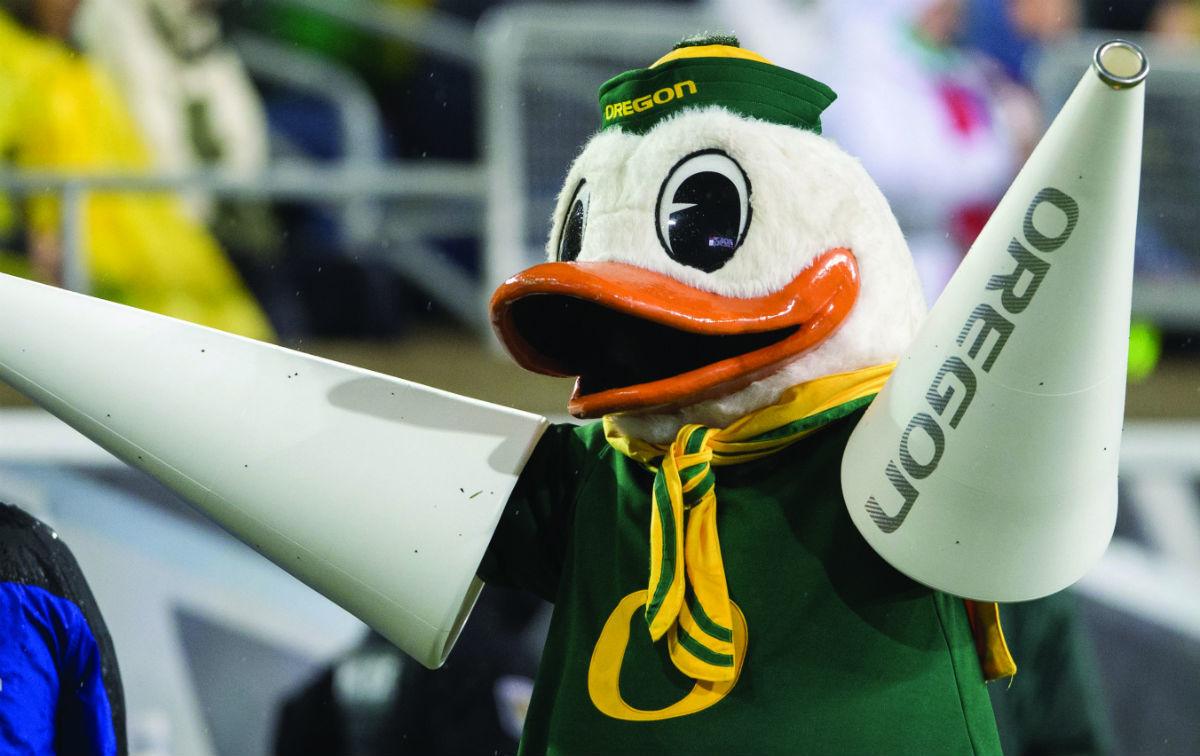 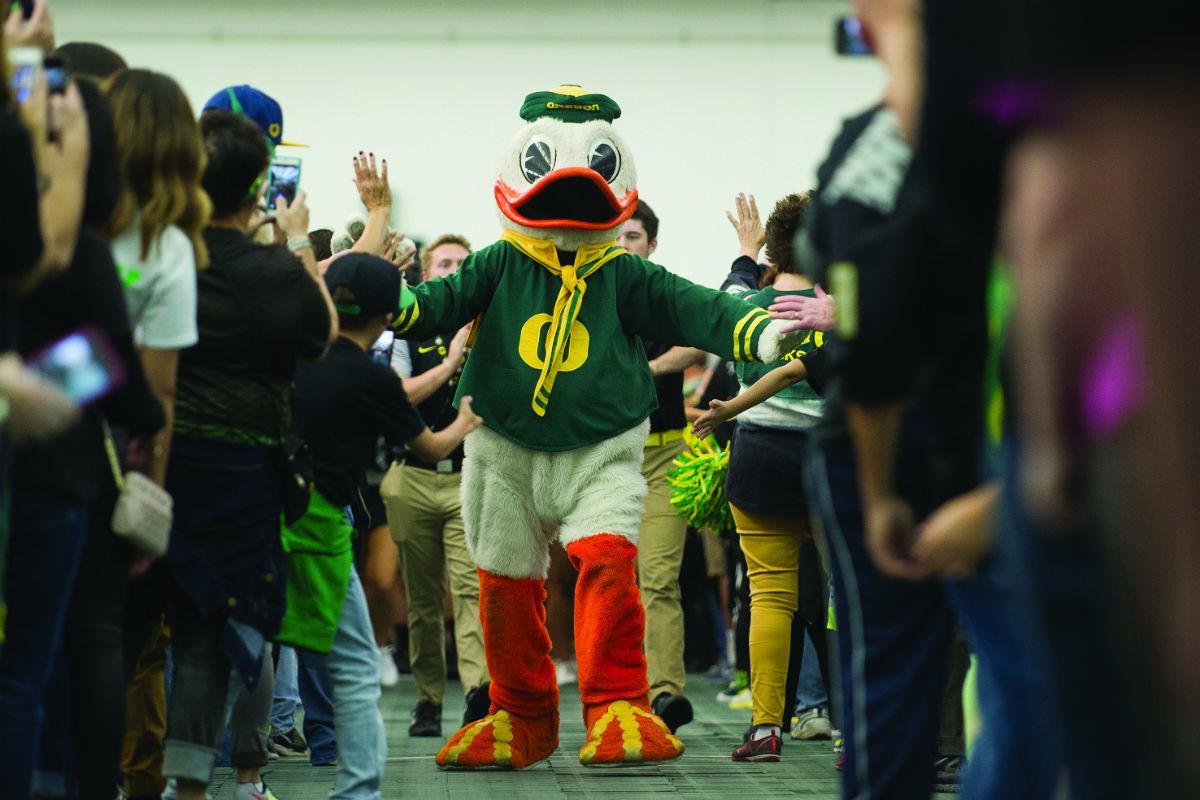 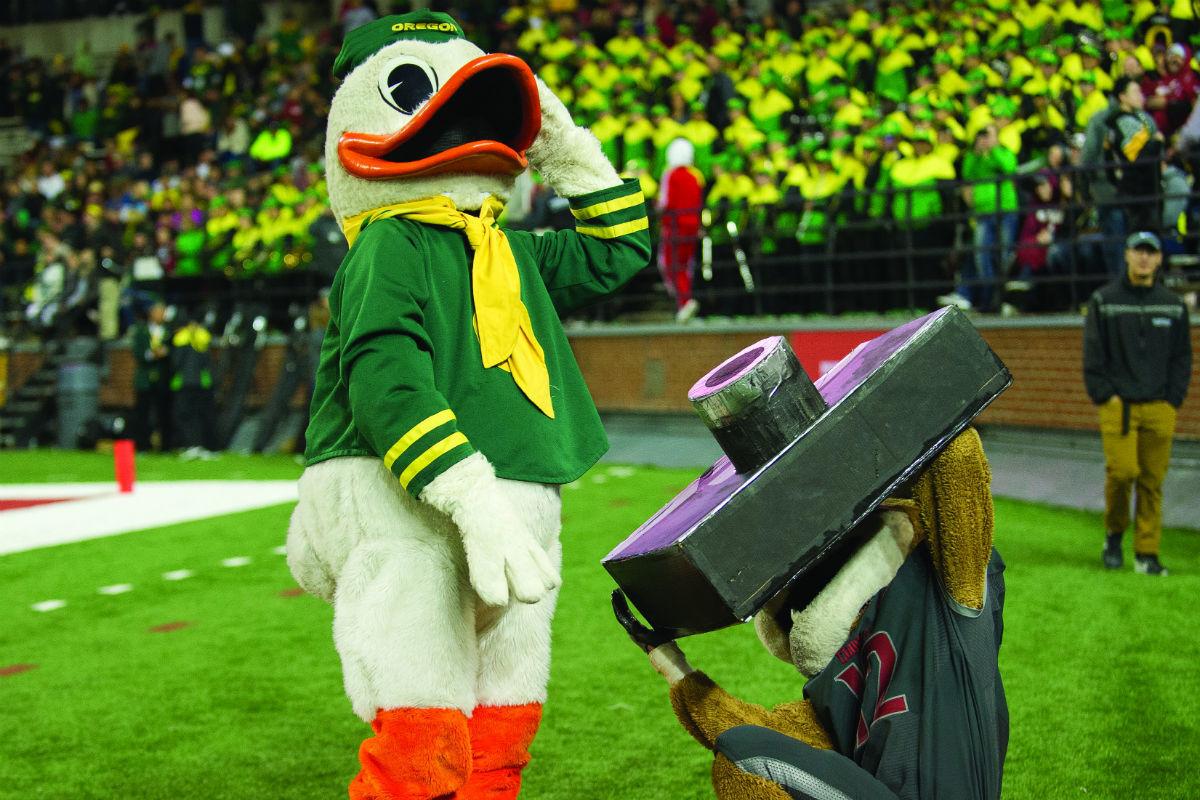 The Duck’s entrance to the 2014 football National Championship — one of the most widely beloved memories in college mascot history — was actually an accident.

“They originally had said ‘Hey you’re not running out with the team’ so I was expecting the team to run by and I would just stand there and clap,” said Matt Triden, the Duck mascot from 2013 to 2016. “And I remember standing there and someone yelling ‘Move!’”

Triden thought he was in somebody’s way, but after moving back into the tunnel where the cheerleading team had just emerged from, the same voice screamed, “Run!”

“I look over and I see the football team coming, and I just panicked,” Triden said. “I sprinted out to catch up with the cheerleading team. I was lucky I didn’t get knocked over.”

Many generations of Ducks have donned the suit, but the student inside remains a secret. Over the last decade the mascot has exploded in popularity, taking on a life of its own.

“The Duck is appealing to people who don’t have an allegiance to Oregon because of the personality that the Duck exhibits,” University of Oregon alum and “SportsCenter” anchor Neil Everett says. According to Everett, the Oregon Duck is the best mascot in college sports.

“That’s not even a question open for interpretation,” he said. “I don’t even have to think about it.”

The demands of the suit

“I think that’s what makes mascots special is that persona,” said Connor Eggerman, Duck mascot from 2011 to 2014. “It’s not a person — it’s what the character represents.”

Eggerman feels satisfaction from seeing various internet memes of the Duck, and knowing it was him in the suit. He also appreciates the legacy created by his predecessors.

“There is a secrecy around mascots,” Eggerman said. “But through all the years of different mascots it creates this family of really tight-knit people. I don’t think you get that in a lot of other college groups.”

Students must audition to gain access to that exclusive club. A secret tryout is conducted every spring term to identify potential mascots. New Ducks are understudies to the “lead” Duck.

Ducks-in-training must prove they can communicate without speaking and show personality and charisma in the suit. For example, trainees try to obtain a student’s phone number while wearing the suit — forcing them outside their comfort zone.

Being the Duck also involves an incredible amount of physical stamina. During football games, the Duck typically takes one break at halftime to hydrate and cool down, and returns to the field. During warm weather, this rigorous duty can cause some serious side effects for the mascot.

“There have been moments when people have puked in the suit with the head on,” Eggerman said. “There is limited ventilation in the head, so when you’re in California for a game and it’s 90 degrees, hot as hell, it feels like 120 degrees in the suit. You get exhausted and you vomit.”

Eggerman also said some mascots have needed IVs and paramedic attention during games.

“If you needed [a break], you could get one,” said Triden. “But I think that’s what was fun about football games — everyone wants to see you. You’re bigger than yourself. You represent the university.

How did the Duck rise to such prominence?

UO officially transitioned from the Webfoots to the Ducks in 1932. In 1947, Athletic Director Leo Harris made an agreement with Walt Disney that Donald Duck could be used as the school’s mascot, according to GoDucks.com. It gave the university a stable mascot, but hindered the exposure of the Duck.

“Because they were still working through the copyright for marketing the Duck, you had to ask for permission for everything, from appearances to using the logo,” said Mal Williams, Duck mascot from 1999 to 2003.

But that didn’t stop Williams from establishing the Duck as a force to be reckoned with, especially when it came to competition with other mascots or rowdy fans.

“I got lit on fire at Autzen,” Williams said. “Someone held a lighter to the back of the Duck suit and the suit caught fire in our student section.”

According to Williams, when the Duck interacts in large crowds like Autzen’s student section, he is usually accompanied by a “Duck-guard”: either an alternate Duck not in costume or a male cheerleader. His guard put out the fire quickly, but Williams wanted to stand up for himself.

“I like the whole self-deprecating, slapstick, ‘let’s have fun’ portion of the mascot,” he said, “but if you think you’re going to pull a fast one on the Duck, you’d better bring your lunch because the Duck is about to put in work.”

Williams found the arsonist and took some swings before letting the fan go. He emphasized taking matters into his own hands in these situations because he viewed the Duck as a symbol for the university.

Mandrake, or as he was nicknamed, Roboduck, was created as the more athletic, tougher version of the Duck, and accompanied a shift in Oregon uniform style to a futuristic look. But Mandrake was a dud.

“There was also buzz that [the athletic department] was trying to replace the Duck,” said Williams. “I’m going to tell you right now, most likely that’s the truth, because at that point — and that was never stated — they could not market the Duck.”

While the athletic department at the time said they had no intentions of replacing the Duck, the experiment was a turning point. Mandrake’s failure proved the Duck could not be challenged.

In 2010, the athletic department gained full marketing rights to the Duck. From there, the stage was set for national recognition of the Duck, provided the athletics garnered that audience.

“I brought Tostitos chips to the Civil War game,” Navarro said, in honor of Oregon’s impending appearance in the Tostitos Fiesta Bowl. “Photographers love that. When we went to the [2011] Rose Bowl for the first time I bought a dozen roses that morning from Safeway because I knew that would make the perfect image.”

During Navarro’s tenure, the Duck made countless appearances in commercials and TV shows like ESPN’s College Gameday. Navarro believed the Duck resonated with so many people because it was something different — a type of mascot they hadn’t seen before.

It’s all about character

“Look at him,” Navarro said. “He’s just an overweight waterfowl. That’s his own thing. He’s a guy who doesn’t listen to much authority. He’s a college kid who feels like a child. He gets excited about licorice.”

Navarro said his personality inside the suit did not match his everyday personality.

“You can’t go to class and throw a coffee at the wall but if the Duck does it it’s funny,” Navarro said. “There’s things you can and can’t do when you’re a person. But I was OK with that. I was OK with being mellow, being me and having this platform to completely go 100 percent.”

The Duck nowadays has shifted towards a more cute and cuddly mascot compared to its earlier years, but the Duck has always stayed true to who he is at heart: an “overweight waterfowl” who can’t stop having fun.

“You look at the Duck’s face, and I’m not intimidated at all,” said Zach Silva, Duck mascot from 2013 to 2017. “So if [the Duck] was trying to be intimidating it wouldn’t work. It’s more fun to have a lovable and silly mascot.”

Silva said that he understands why the identity of the Duck is secret. But at the end of the day, it’s really just the Duck that matters.