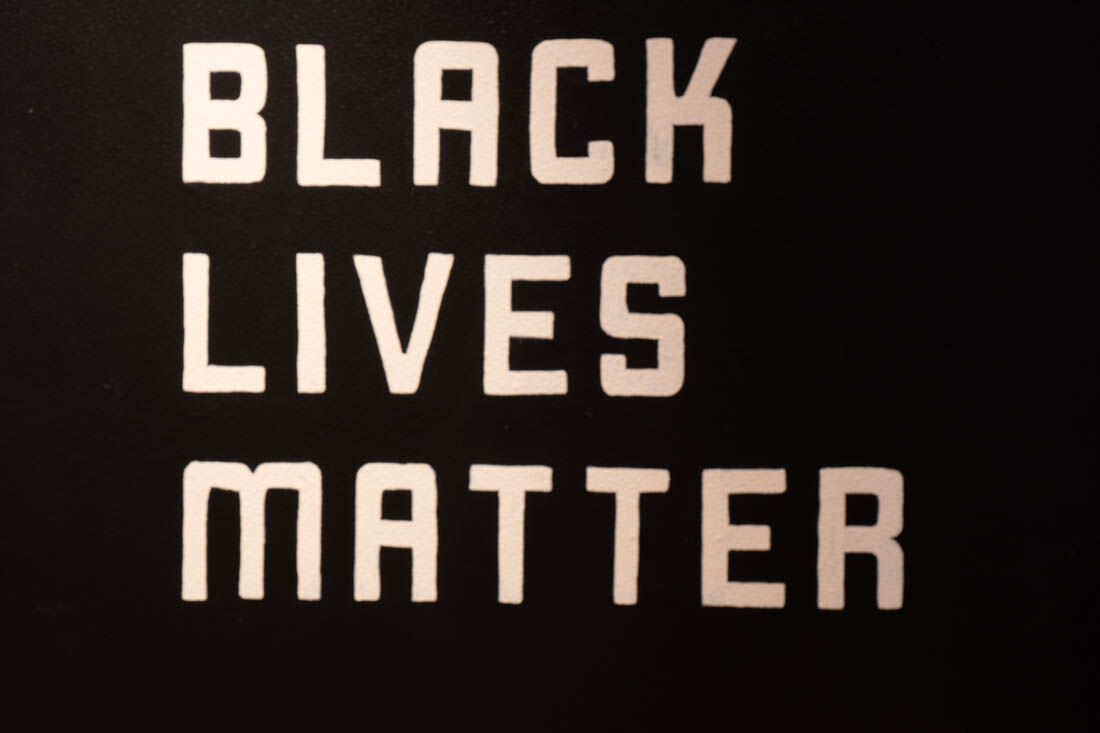 Nearing the end of the exhibit the famous phrase, "Black lives matter" is displayed. 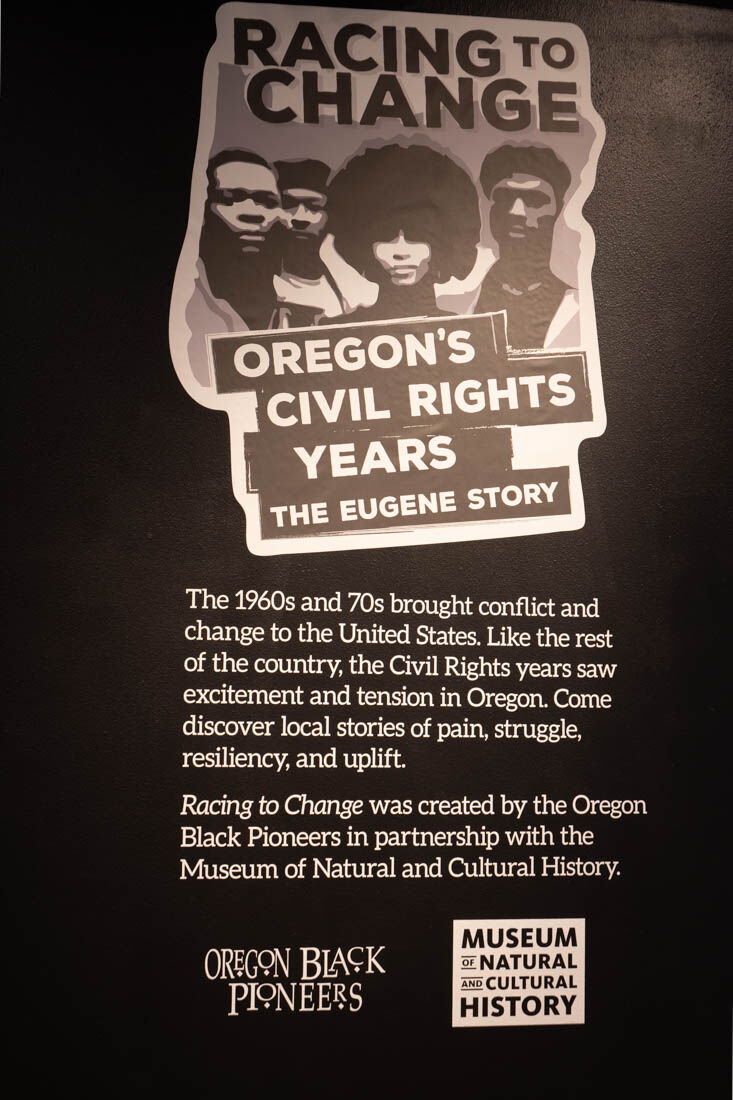 “Racing to Change: Oregon’s Civil Rights Years — The Eugene Story” is the latest exhibit in the Natural and Cultural history museum on the University of Oregon's campus. (Ali Watson/Emerald) 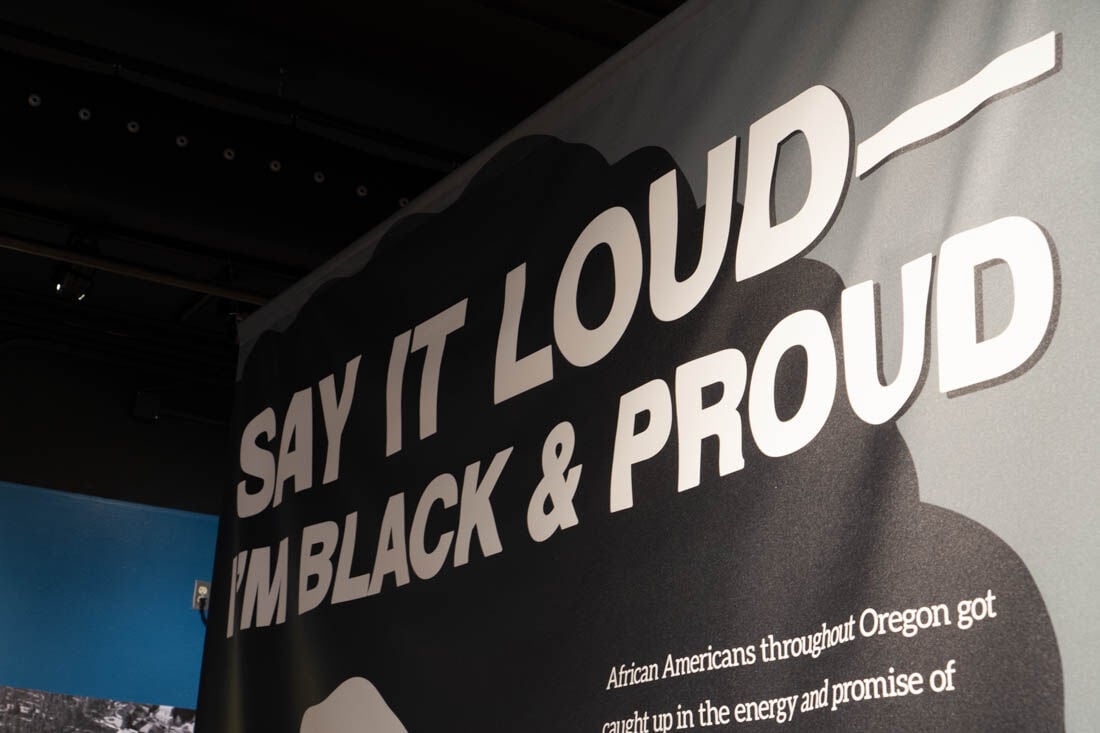 Phrases such as, "Say it loud-I'm Black and proud," are displayed across the wallspace of the exhibit. (Ali Watson/Emerald) 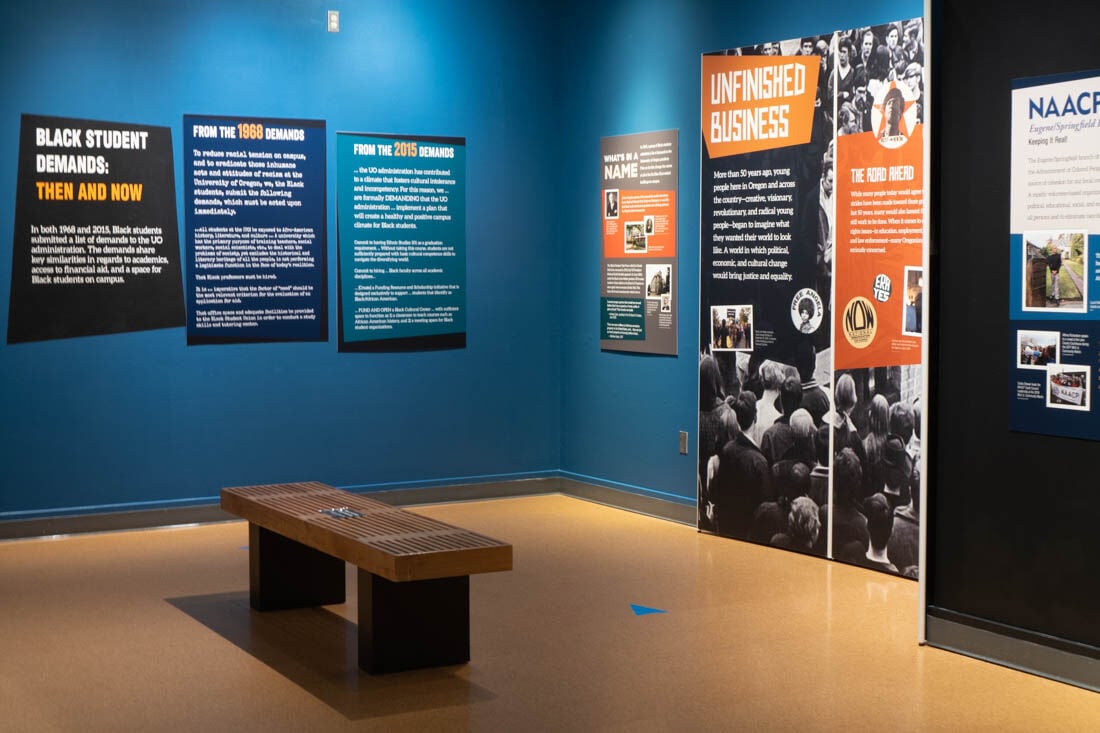 Towards the back of the exhibit, visitors can learn about how demands have changed over time. (Ali Watson/Emerald) 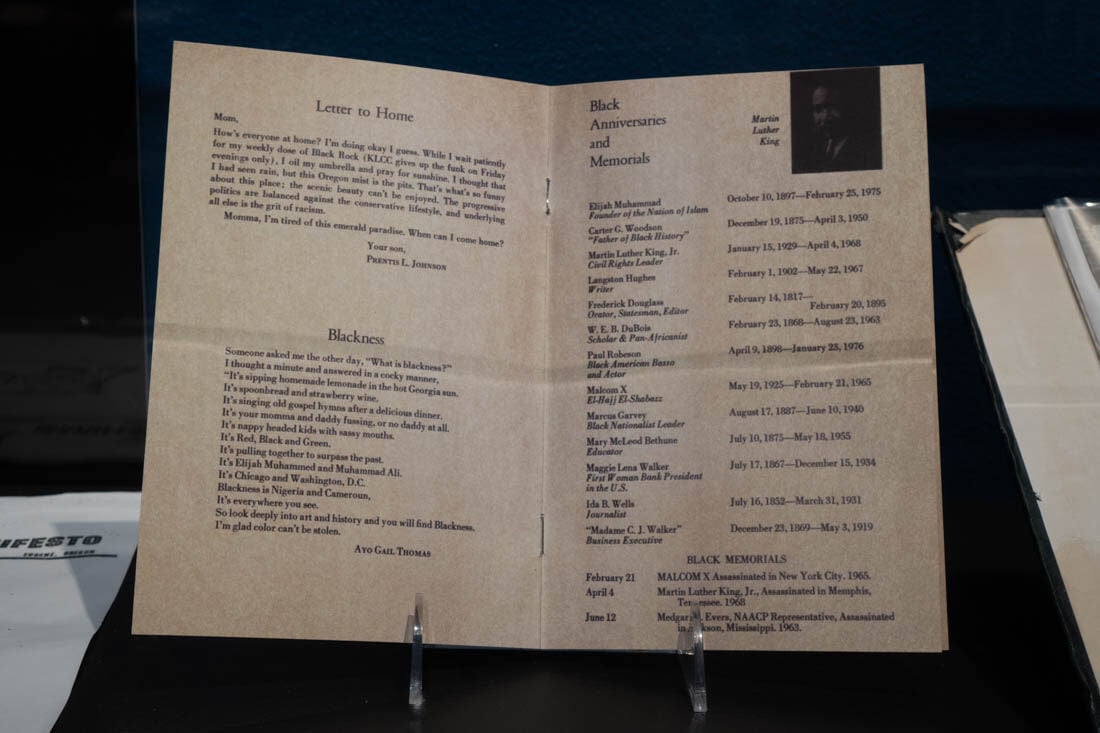 At the end of an exhibition piece titled, "Letter to Home," the writer signs off with "Momma, I'm tired of this emerald paradise. When can I come home?" (Ali Watson/Emerald) 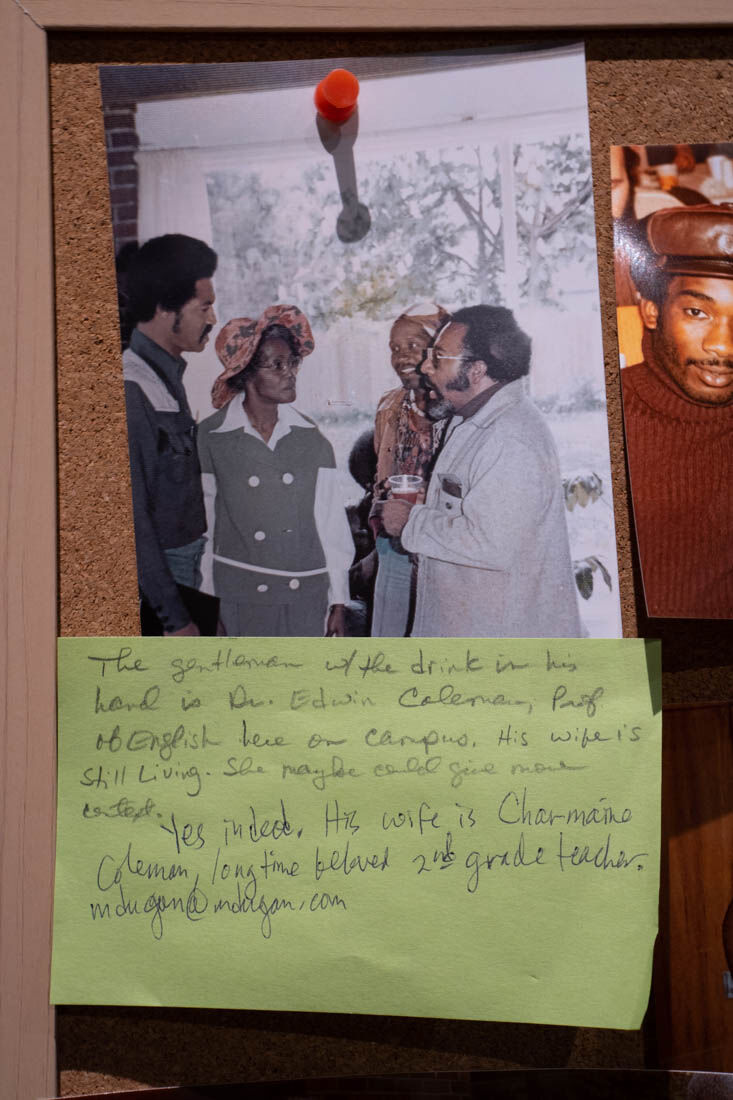 Hidden away in the exhibit is a wooden and cork board pinned with photos of Black students waiting to be identified. One photo has been identifed with a handwritten sticky note as the person being Dr. Edwin Coleman. (Ali Watson/Emerald)

Nearing the end of the exhibit the famous phrase, "Black lives matter" is displayed.

Phrases such as, "Say it loud-I'm Black and proud," are displayed across the wallspace of the exhibit. (Ali Watson/Emerald)

Towards the back of the exhibit, visitors can learn about how demands have changed over time. (Ali Watson/Emerald)

At the end of an exhibition piece titled, "Letter to Home," the writer signs off with "Momma, I'm tired of this emerald paradise. When can I come home?" (Ali Watson/Emerald)

This graphic is one of the many images included in the “Racing to Change: Oregon’s Civil Rights Era, The Eugene Story” exhibit at the Museum of Natural and Cultural History, curated in collaboration with the Oregon Black Pioneers. The exhibit aims to tell the history of Eugene’s racist past. The exhibit is available both in-person and online.

Charles Dalton came to Eugene 50 years ago, where he served as a spokesperson for the NAACP. For the exhibit, Dalton was interviewed about his experiences with police in Eugene in the 1970s.

“I later found out that this was common policy,” Dalton said in a video, referring to being stopped by the Eugene police after less than an hour in town. “They actually kept a photo book of every Black male that stayed in town longer than one week.”

The exhibit includes a number of video interviews, graphics, written histories and photographs. It engages the viewers by asking them to participate by responding to a number of questions. The viewer can respond to prompts such as: ‘What do you remember? What did we forget?” The responses are then posted as anonymous comments alongside the online exhibit.

The online version of the exhibit is portrayed on a platform that feels like a traditional website. A number of tabs allow the viewer to navigate between different categories from “Pre-Civil Rights Era” to “Unfinished Business” and a number of themes in between.

While viewing exhibits online is a new change since the beginning of the COVID-19 pandemic, it is one that the Museum of Natural and Cultural History plans to keep, according to its marketing and communications director Kristin Strommer. Online access increases accessibility for many different people, including educators. The “Racing to Change” exhibit is accompanied by a guide for K-12 educators to teach about civil rights in Eugene.

An old black and white photograph from 1921 of Willamette Street is unassuming at first, until the viewer’s eyes gaze at the back left where Ku Klux Klan letters are seen atop Skinner Butte. On this same page of the exhibit, the curators provide a history of the KKK in Eugene in the 1920s. According to the site, Oregon was home to the largest membership per capita of the Klu Klux Klan in the United States, and the Eugene chapter was particularly large.

The exhibit goes on to detail how Oregon was declared a “White’s only state” in the constitution. In Oregon’s original constitution of 1857, it was written that “No free Negro, or Mulatto, not residing in this state at the time of the adoption of this constitution shall come, reside, or be within this state.” This meant that no Black person could legally move to and live in Oregon.

Strommer said many viewers, primarily White people, have left the exhibit saying “I had no idea” regarding both the racism in Eugene and how the Black community fought back in response.

“In Eugene, there is a dominant narrative here that there is no racism,” Strommer said. “That’s really not true.”

While the exhibit does a good job of succinctly providing a history of the pre-civil rights racism in Eugene, it also highlights the Black community then and now. In the tab “Black & Proud,” a black and white photograph portrays a young couple sitting in the park. The woman gazes up at the man, and they both are wearing their hair in afros. Next to the photograph, a caption explains the importance of the phrase “Black is beautiful.”

The exhibit dedicates a whole tab to the history of the University of Oregon. The Black Panther Party was active in Eugene from 1968 to 1970, and many members were UO students, according to the exhibit. The Black Student Union was created in 1966 to spark activism within the community.

The exhibit ends with a call to action. It urges viewers to get involved with activism in the community and provides links to nine different organizations in Eugene that are serving the Black community and fighting for social justice.

The in-person exhibit is up until the weekend of Sept. 18, but the online viewing will be available indefinitely.

“The exhibit is inspiring,” Strommer said. “It’s a wonderful example of how organizing at the grassroots level can bring about change.”

Nika is a writer at the Arts & Culture desk. Send her an email if you know of any local artists or events that should be featured!