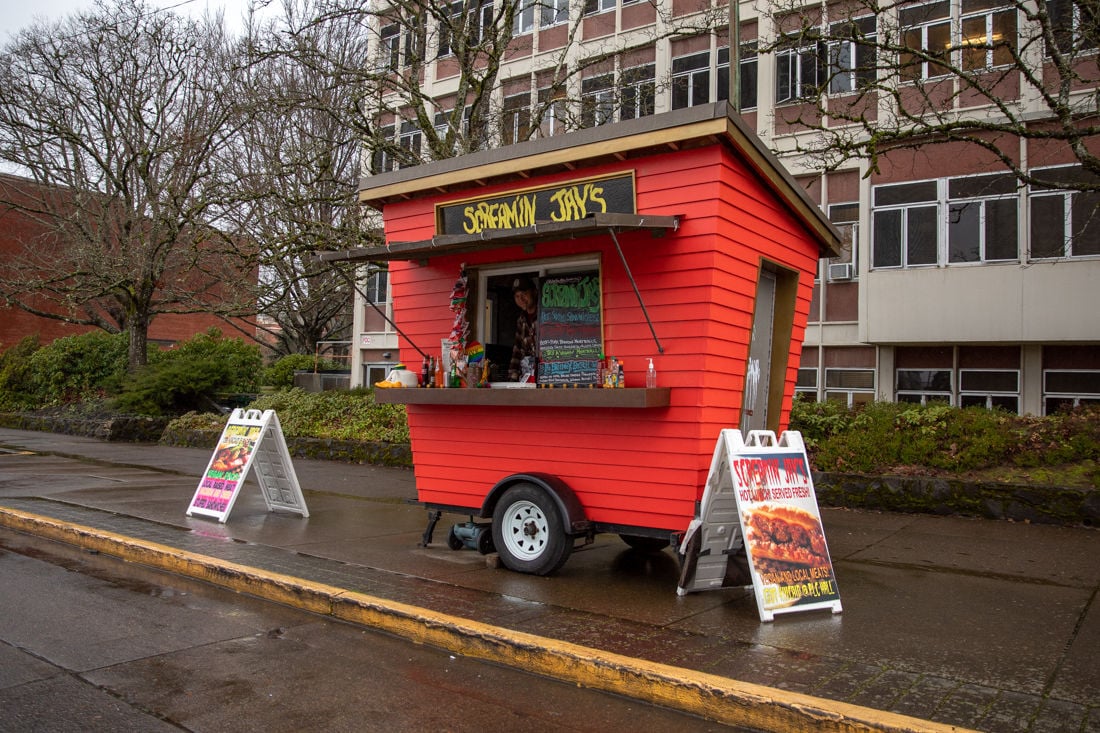 Screamin’ Jays Hot Lunch is a food truck located on the border of the University of Oregon campus in Eugene, Oregon. (Maddie Knight/Emerald) 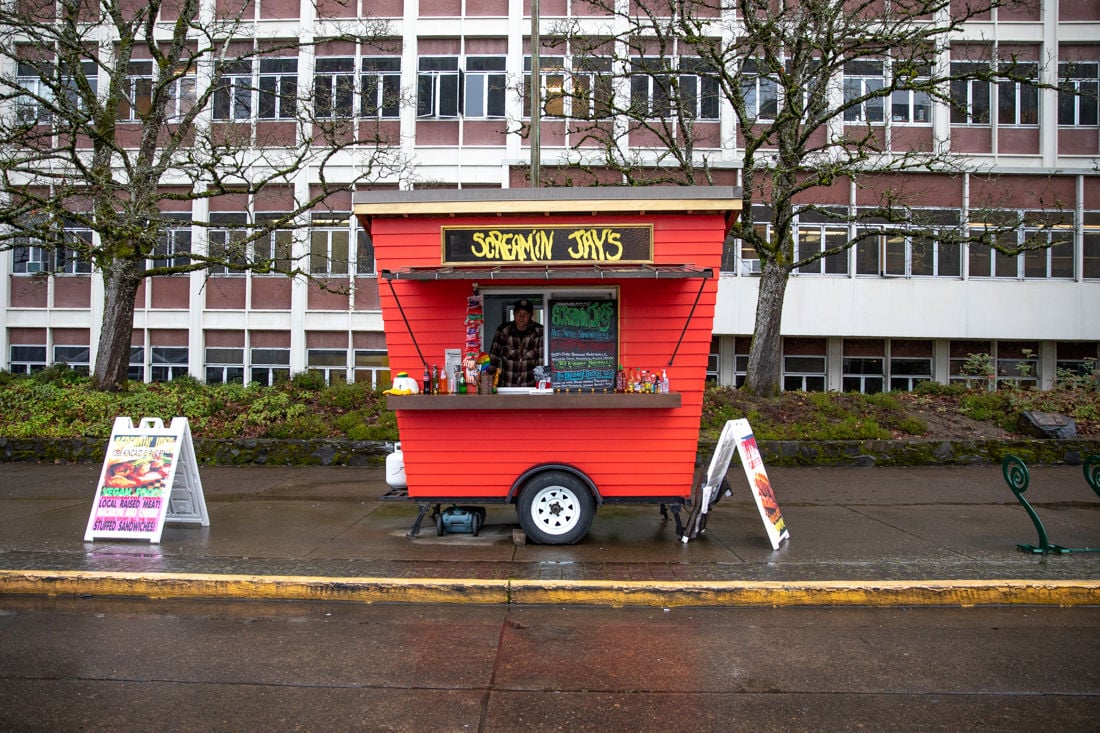 Screamin’ Jays Hot Lunch is a food truck located on the border of the University of Oregon campus in Eugene, Oregon. (Maddie Knight/Emerald)

No, these aren’t the names of 70s rock bands ⁠— although they probably could be. They’re a couple of the many sandwiches served at Screamin’ Jay’s Hot Lunch, a food cart at the intersection of East 14th Avenue and Kincaid Street, right outside PLC.

If the location sounds familiar or the cart doesn’t look all that new, it’s probably because the cart used to be the Soup Nation cart that sits in front of PLC. The little (newly) red cart was built and opened in 1997, and it has been there ever since.

The new owners, Fiona Gledhill and Jesse Gandy, decided that the food cart would be a perfect place to start their new business.

“We were looking at brick and mortar places and all of our options, but when this one came up, we thought that being on campus would be a really great opportunity to build up clientele,” Gledhill said. “The old owner built it himself in 1997, so it’s a little rustic, but we’ve done some upgrading to the inside. It’s got its challenges, but that’s what makes it fun.”

After moving to New Orleans, Gledhill said she fell into the culture of working in restaurants and ended up landing a job with Emeril Lagasse, a celebrity chef who’s famous for his food. When she moved back to Eugene, she knew that the high profile restaurants she was used to didn’t have a huge market here, so she started her own thing.

“I grew up in Eugene, and there used to be a lot of vegan food in Eugene, just leftovers from the 70s culture, but there isn’t quite as much as there used to be,” Gledhill said. “What we do is kinda rad because we always have at least two meat and two non-meat options, so if you and all your friends come everyone can eat how they want.”

Gledhill said that one of her favorite parts of the job is seeing people who start out eating meat at the cart slowly start to trust what they do and try the vegan options instead.

“We have a regular pulled pork, and we have a pulled tofu, and the tofu looks so much like meat that vegans will bring it back and freak out,” she said. “And then people who eat meat see it and say “there’s no way that’s tofu, I have to try it,” and they love it and make the switch, which is great for the planet.”

She also said that the cart has been making moves to be eco-friendly and sustainable whenever and wherever possible.

“There was a group named “Trash Pirates & Waste Naughts” that helped us with our packaging and showed us some different ways we could do things. We now have 100% compostable packaging, where before we were using foil and things like that,” she said. “Everythings locally sourced from the Eugene area, so we’re able to purchase a lot of things that don’t require a ton of packaging or preservatives from places like the co-op.”

The food cart is also completely self-contained and it doesn’t require electricity or water.

“It’s definitely a lot less wasteful than running off a generator. It’s really cool because we’re able to do festivals that are outside normal places like mountain biking or tree climbing events that a lot of other carts can’t do,” she said. “It’s nice to feel good about what you’re doing, especially when you can talk to people about why you’re doing it.”

Gledhill said that they’ve been so busy with opening the cart, they still haven’t done any real advertising, but that word of mouth has been a huge help.

“We got a couple of oboe players and then all of a sudden we had a bunch of music students. It’s crazy how much you can see the effect of word of mouth.”

However, Gledhill also contributes a lot of the success they’ve had to their willingness to try new things.

“We don’t just do salads or rice and beans, our menu is pretty creative, so we’ve grown a lot with the vegan audience,” she said. “The menu also changes all the time, which is rad because you can eat here one week and come here the next week and get something completely different.”

She also said that the creative freedom that comes with owning her own business is what makes the job so enjoyable for both her and her customers.

“We like to have fun with the food here and enjoy what we do. We’re serious about the food but we have fun with the names of the sandwiches and the ingredients. We don’t want anyone to feel like we’re stuck-up or that our food isn’t accessible, eating should be fun, not stressful.”

This article was updated on the evening of Wednesday, Jan. 29 to correct the spelling of Brussels sprout.