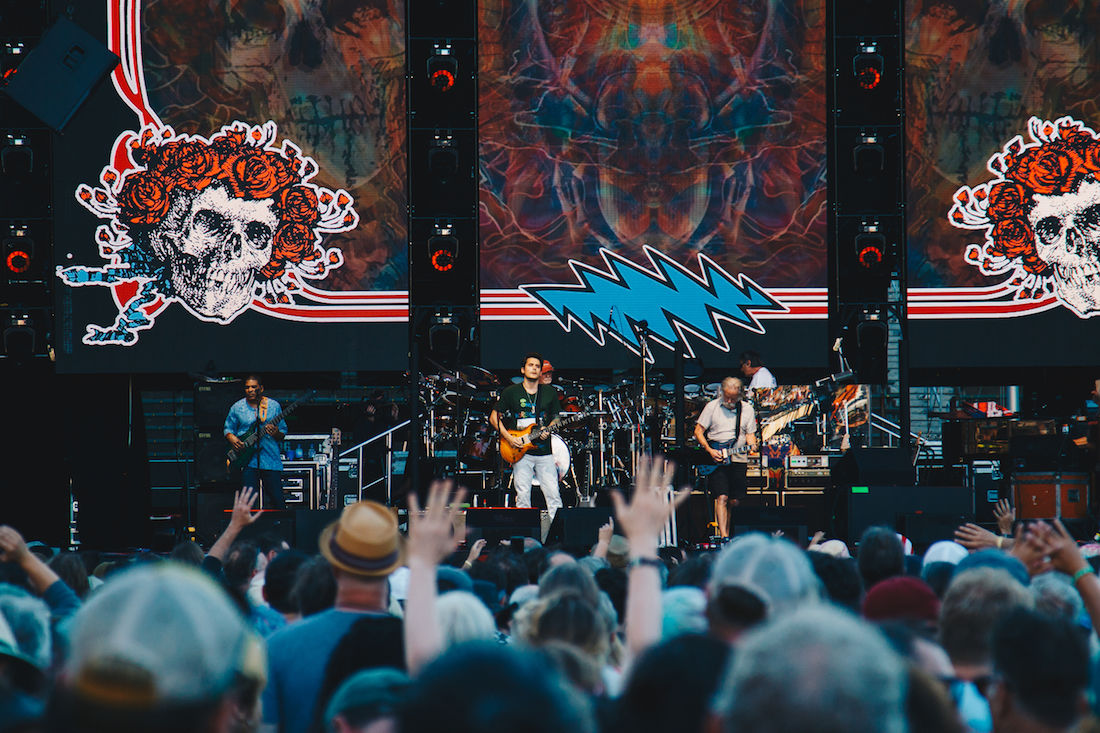 In June of 1978, thousands of Dead Heads made their way to Eugene for The Grateful Dead’s first performance at Autzen Stadium. Many were in search of a spiritually transformative musical experience — others just came for a good time. Santana, Eddie Money, and The Outlaws joined The Grateful Dead … 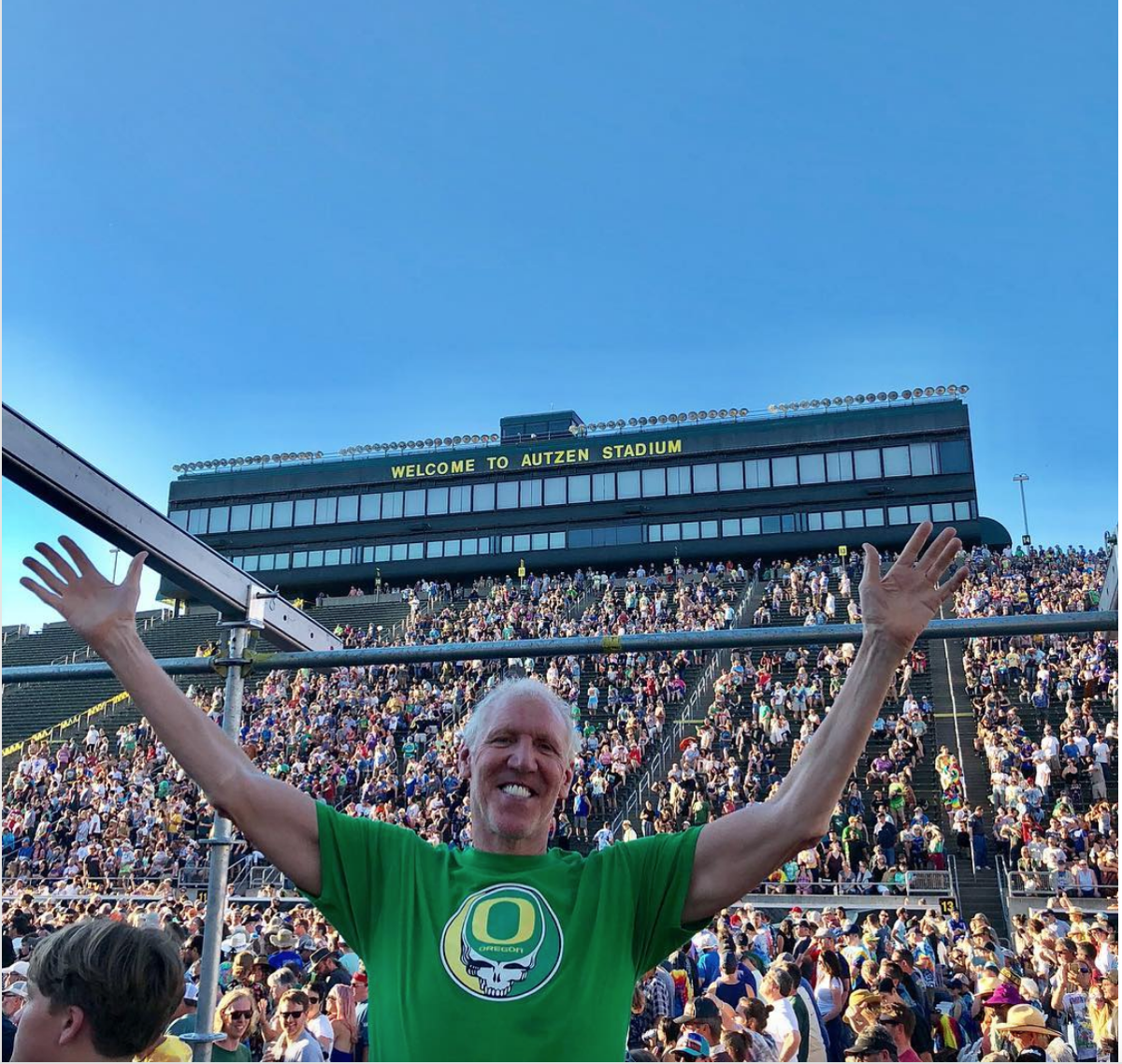 “Long Live The Grateful Dead !!! We, of the Oregon Dead, are most grateful,” former Portland Trail Blazers star center wrote on his Instagram after Dead and Company’s Autzen performance. (Via Bill Walton’s Instagram) 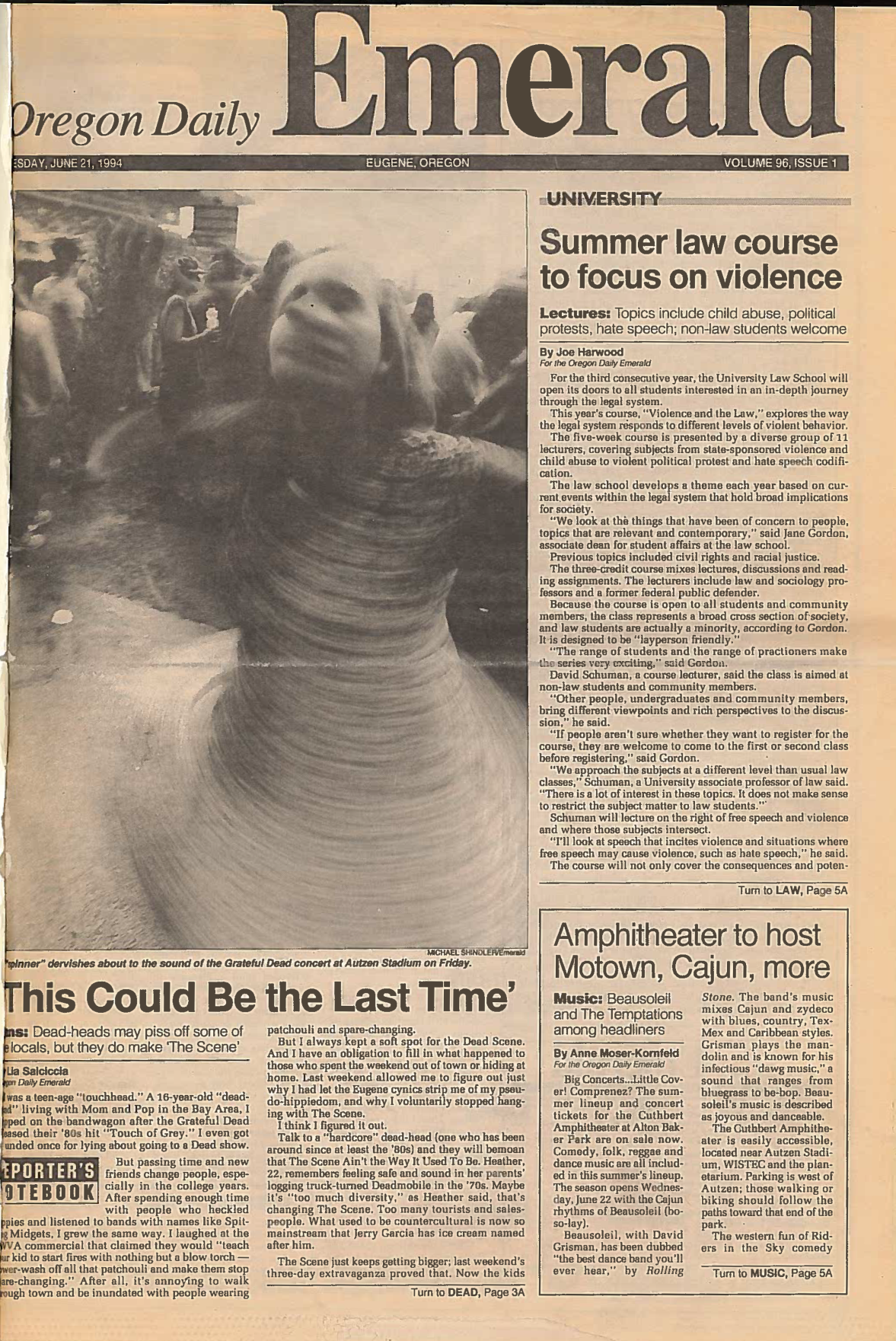 The Emerald’s cover in 1994 featured a concert review of The Grateful Dead’s final performance at Autzen Stadium. During the show, The Dead hinted at the idea of it being the band’s last performance at the stadium by performing a cover of The Rolling Stones’ “The Last Time.” Frontman Jerry Garcia passed away a year later and The Dead were never the same. (Emerald Archives) 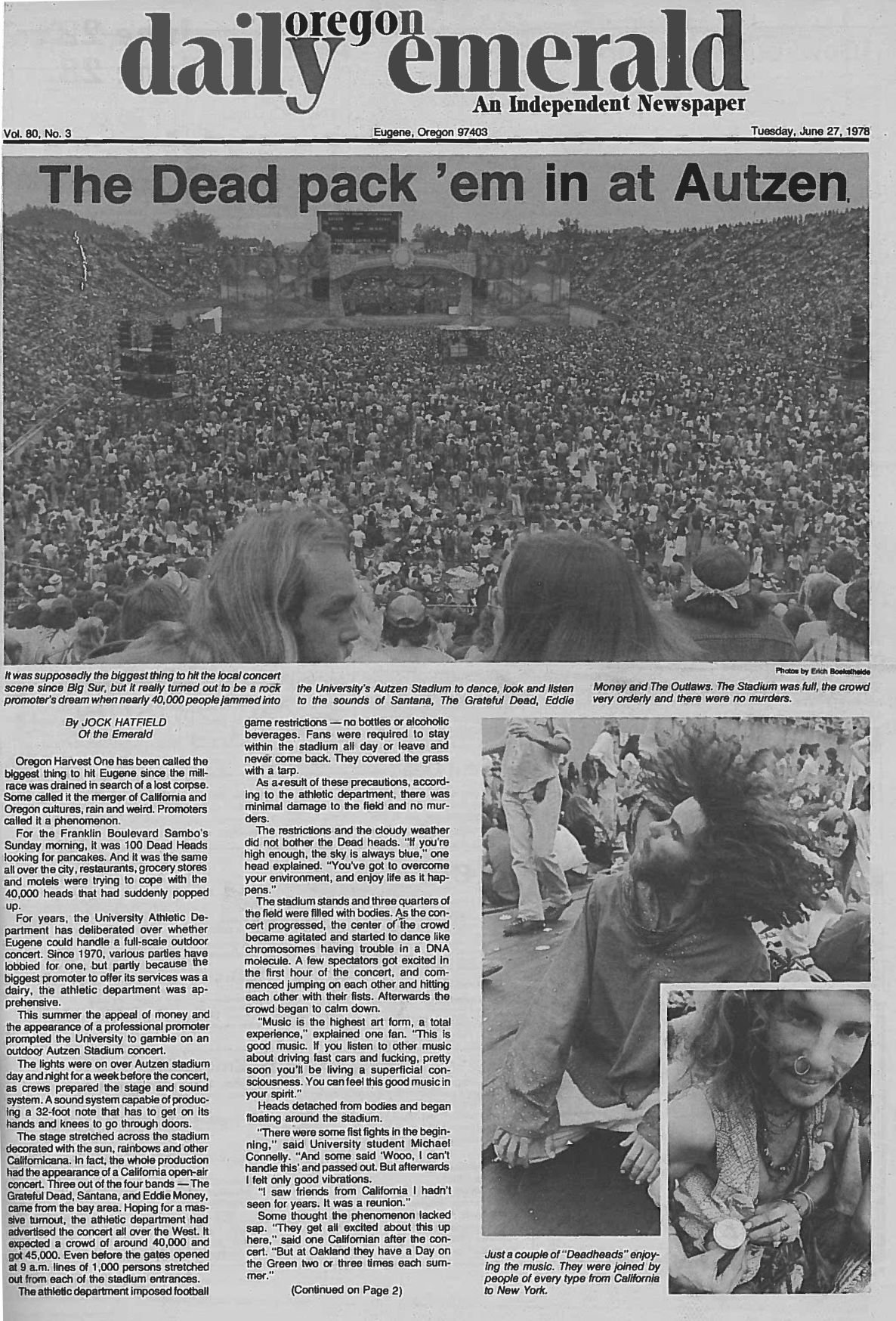 The Emerald’s cover in 1978 featured a concert review of The Grateful Dead’s Autzen Stadium performance. The show was the first to ever be hosted at the Ducks’ home field and attracted a crowd of 45,000. (Emerald Archives) 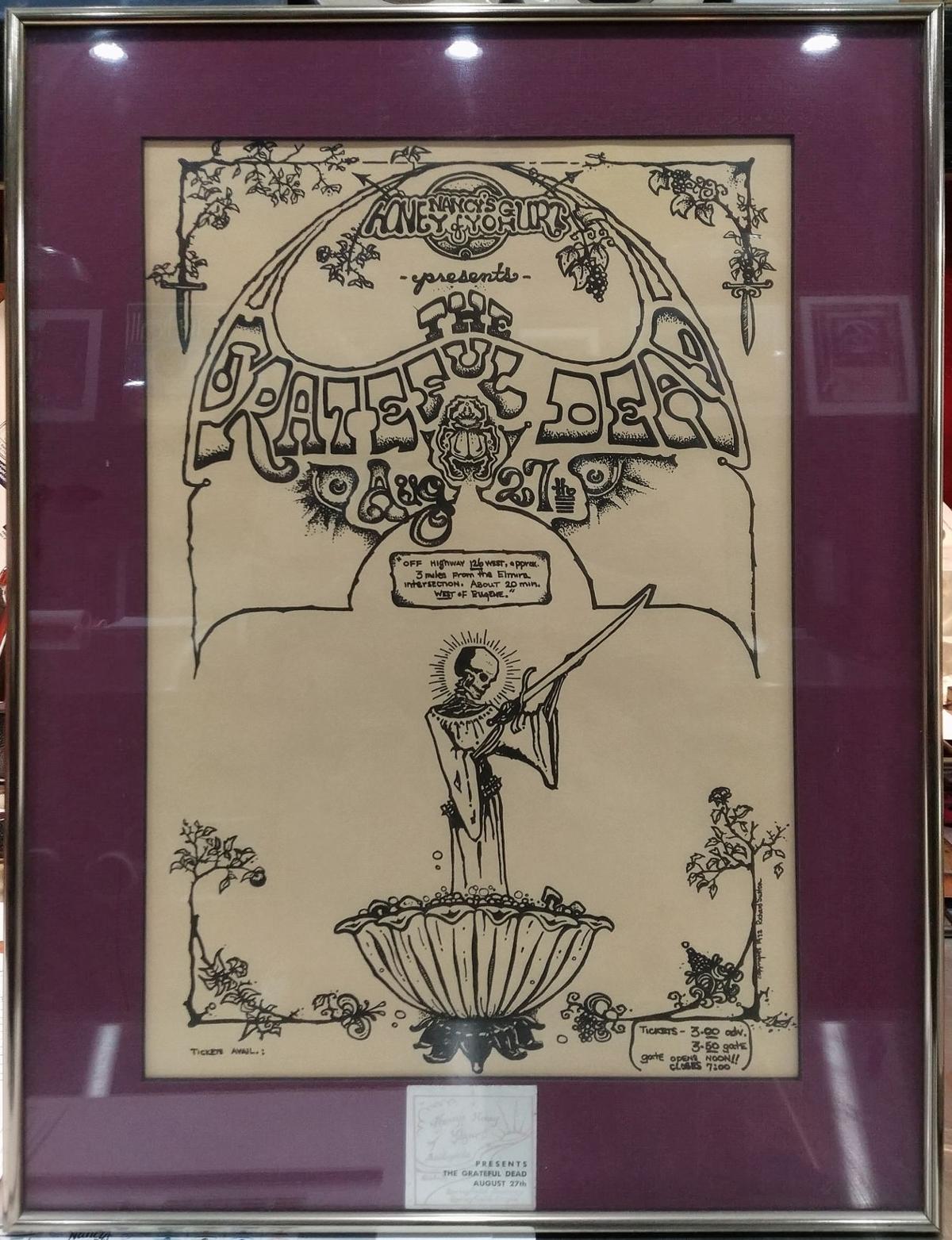 The Grateful Dead performed at the Oregon Country Fairgrounds in 1972. The concert was a benefit to save the Kesey’s family owned Springfield Creamery, which is where Nancy’s Yogurt is produced. (Via Kesey Enterprises) 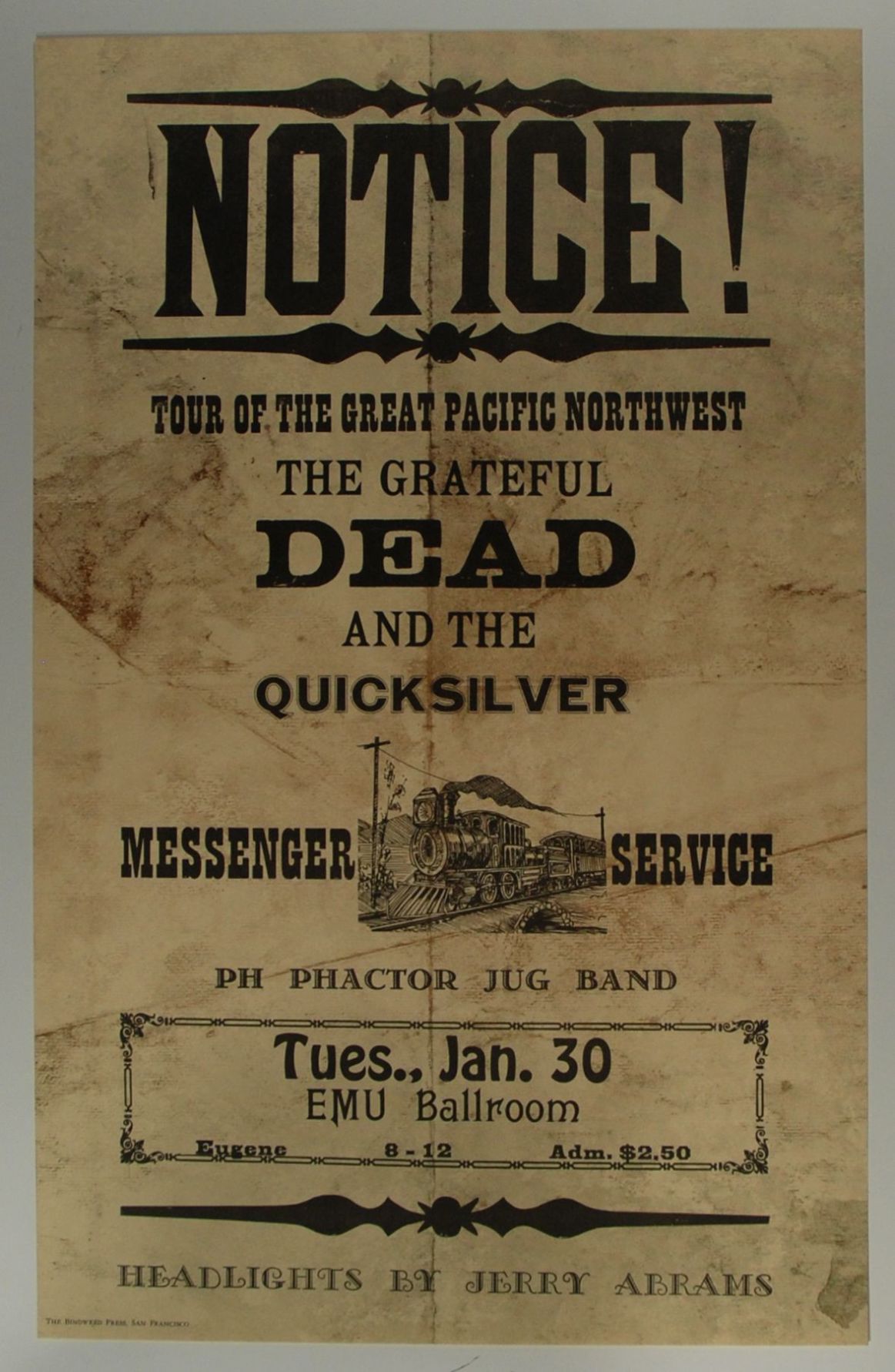 In June of 1978, thousands of Dead Heads made their way to Eugene for The Grateful Dead’s first performance at Autzen Stadium. Many were in search of a spiritually transformative musical experience — others just came for a good time. Santana, Eddie Money, and The Outlaws joined The Grateful Dead …

In June of 1978, thousands of Dead Heads made their way to Eugene for The Grateful Dead’s first performance at Autzen Stadium. Many were in search of a spiritually transformative musical experience — others just came for a good time.

Santana, Eddie Money, and The Outlaws joined The Grateful Dead for the first concert ever hosted at the Ducks’ home field. Music reporter Jock Hatfield wrote on the Emerald’s cover in ’78 that the concert was a “merger of California and Oregon culture, rain and weird.”

According to Hatfield, the event’s coordinators expected a crowd of 40,000; 45,000 showed. Not to mention the thousands standing outside the stadium listening from afar, looking for a “miracle” — a term Dead Heads use when in search of a free ticket.

On June 30, 2018, The Grateful Dead found its way back to Autzen Stadium for the 40th anniversary of its first show at the venue. The performance also marked the first concert held at Autzen since U2’s performance in May of  ‘97.

This time, the group appeared in the form of Dead and Company, which is an offshoot that consists of Bob Weir, Mickey Hart, Bill Kreutzmann, John Mayer, Oteil Burbridge and Jeff Chimenti.

The Grateful Dead’s return is more significant than just the anniversary of a concert and the reopening of Autzen’s musical gates, though.

“We thought it would be a good show for Autzen Stadium due to the Grateful Dead’s long connection to Eugene,” Associate Athletic Director Mike Duncan, who played a significant role in coordinating the concert, said in an email to the Emerald. “Their connections to Eugene, going back to the early years of the band, were an important factor in Dead and Company wanting to play Eugene.”

The history of The Grateful Dead in Eugene goes further back than ’78, and the impact the group has had on the region’s music scene and the Eugene-Springfield community as a whole is more significant than many may know.

“The Grateful Dead’s connection has a much more broad base impact on Eugene than them just playing music here,” Kit Kesey, the owner, founder and president of Kesey Enterprises, said. He also sat in on planning meetings for Dead and Company’s performance as a consultant.

Kit is the son of Chuck and Sue Kesey, who founded the Springfield Creamery in ’60. Chuck is also the brother of University of Oregon alum and author Ken Kesey, famous for his novels “One Flew Over The Cuckoo’s Nest” and “Sometimes A Great Notion.” Downtown Eugene’s Kesey Square is named after him.

Ken, who passed away in ’01, was also well-known for his involvement in The Grateful Dead. Often regarded as a founding member of the group, Ken held the infamous Electric  Kool-Aid Acid Tests throughout the ’60s and ’70s at his home in La Honda, California. The Grateful Dead subsequently became the house band for those gatherings. Ken also brought the band to play shows at the Springfield Creamery.

So, when the creamery fell under hard financial times in the early ’70s, Chuck decided to visit the band in the Bay Area to ask if they would be interested in playing a benefit concert.

“The Grateful Dead came to the benefit for Springfield Creamery, which basically saved the creamery and allowed us to continue on,” Kit said. “And that was the beginning of my involvement in the music industry.”

More than 20,000 people were in attendance at the benefit, which took place on the Oregon Country fairgrounds in ’72. Chuck and Sue printed tickets for the benefit on the back of Nancy’s Yogurt labels, a product the couple had launched out of their creamery just two years before.

Today, Nancy’s Yogurt sells in all 50 states and select locations in Canada. The couple still own the creamery.

The Keseys helped coordinate more Grateful Dead shows in Eugene, including the Autzen performance in ’78 and the 10-year anniversary of the creamery benefit show in ’82.

The ’82 Field Trip performance was another benefit show that took place on the fairgrounds. This time, the concert was a fundraiser for the Country Fair itself. In prior years, the fair had leased the fairgrounds, but continuing to do so was no longer a viable option.

The Grateful Dead’s performance drew a crowd of 20,000, according to The Register-Guard. The large turnout helped raise enough money for the fair to purchase the land on which it still operates. The 49th annual Oregon Country Fair will take place July 13-15.

The Grateful Dead returned to Eugene again in ’83 and ’84 at the Hult Center, becoming the first rock group to ever perform at the event center.

The Grateful Dead would go on to play at Autzen in ’87 with Bob Dylan for the Alone and Together Tour, in ’88 as the sole main act and again in ’90 with rock group Little Feet. Little Feet frontman Lowell George produced The Grateful Dead’s ’78 record “Shakedown Street.”

Vicky Gelatt, the owner of the Lane County Music History Project, described the atmosphere at Eugene Grateful Dead shows as “one big happy family,” and “A journey. Always left feeling like I was on a journey.”

In June of ’93, The Grateful Dead played Autzen again. Along with Bill Graham, a San Francisco-based concert promoter, and Double T, a Portland-based concert promotion company, Kit organized for the band to perform back-to-back nights at the stadium.

Following the ’93 performance, there was community outcry that the university was condoning the use of illegal drugs by hosting The Grateful Dead at Autzen. In response, the university banned the group from returning to the stadium, according to the Register-Guard and Willamette Week.

But the ban didn’t last long. Dead Heads quickly organized a protest and the ban was lifted. The Grateful Dead returned to Autzen in ’94 for what would be its last performance at the stadium. Kit and the other promoters were able to arrange for the band to play three consecutive nights.

“There was nothing like it. No other band had that,” Kit said of those live performances. “Grateful Dead was truly a unique concert experience because it was much more than a concert. At that point, they had 25,000 people follow them out to door wherever they went. I always said you could’ve put Grateful Dead in Burns, Oregon, and you could’ve got 34,000 people, and you can’t say that about any other band.”

But in August of ’95, tragedy struck The Grateful Dead community. Lead singer and guitarist Jerry Garcia passed away from a heart attack. Garcia previously suffered a drug relapse that sent him to a rehabilitation center in central California, where he died in his room.

The Grateful Dead was never the same following the loss. Throughout the late ’90s and ’00s, the remaining members tried organizing several offshoot groups, such as the Other Ones and the Dead. The group’s first return to Eugene following Garcia’s death was the Further Festival in ’96.

In ’97, U2 and Rage Against the Machine hosted the first concert at Autzen following Garcia’s death. It was also the last performance at the venue prior to Dead and Company’s recent show.

“In my opinion, it was just a financial reason,” Kit said of the university’s decision to stop holding shows at Autzen. “There were no other bands that really had the traveling fan base that could support a show of that size.”

Throughout the process of organizing The Grateful Dead’s ’90s performances, Kit founded Kesey Enterprises, which is a concert and event production and promotion company. Kesey Enterprises now owns Eugene’s McDonald Theatre, which Kit began leasing in ’01 and later purchased in ’09.

The company also has a joint concessions agreement with Double T productions and the city of Eugene to produce concerts at Cuthbert Amphitheater. The venues are some of the most popular music performance facilities in the region and bring 100s of artists to Eugene every year.

Kit directly credits The Grateful Dead’s performance at the benefit for the Springfield Creamery as means of his current livelihood with Kesey Enterprises.

“They basically reboosted Springfield Creamery, they boosted me and then they allowed me to get back involved in the music industry,” Kit said. “That then started me up looking at venues and buying the McDonald Theatre. It goes full circle.”

In a way, one concert opened an avenue for music to thrive in Eugene for decades.

So when Dead and Company packed Autzen with thousands of fans on June 30, it was more than the 40-year anniversary of The Grateful Dead’s first show at the venue and first performance there in over 20 years.

For many members of the Eugene-Springfield community, the concert served as a reminding symbol of the unmatched, everlasting impact the band has had on the region’s music, economy, politics, culture and everything in between.

“[The Grateful Dead] put my life on a course that, without their participation, it wouldn’t have been on,” Kit said. “I actually can’t see anybody that was much more influenced by it. It changed what I’m doing and how I’m doing it. Individual band members, it’s way past that to more what the band itself did to influence my world.”

Zach was the 2018-19 Editor in Chief of the Daily Emerald newsroom. In his spare time, he enjoys watching the Portland Trail Blazers games.