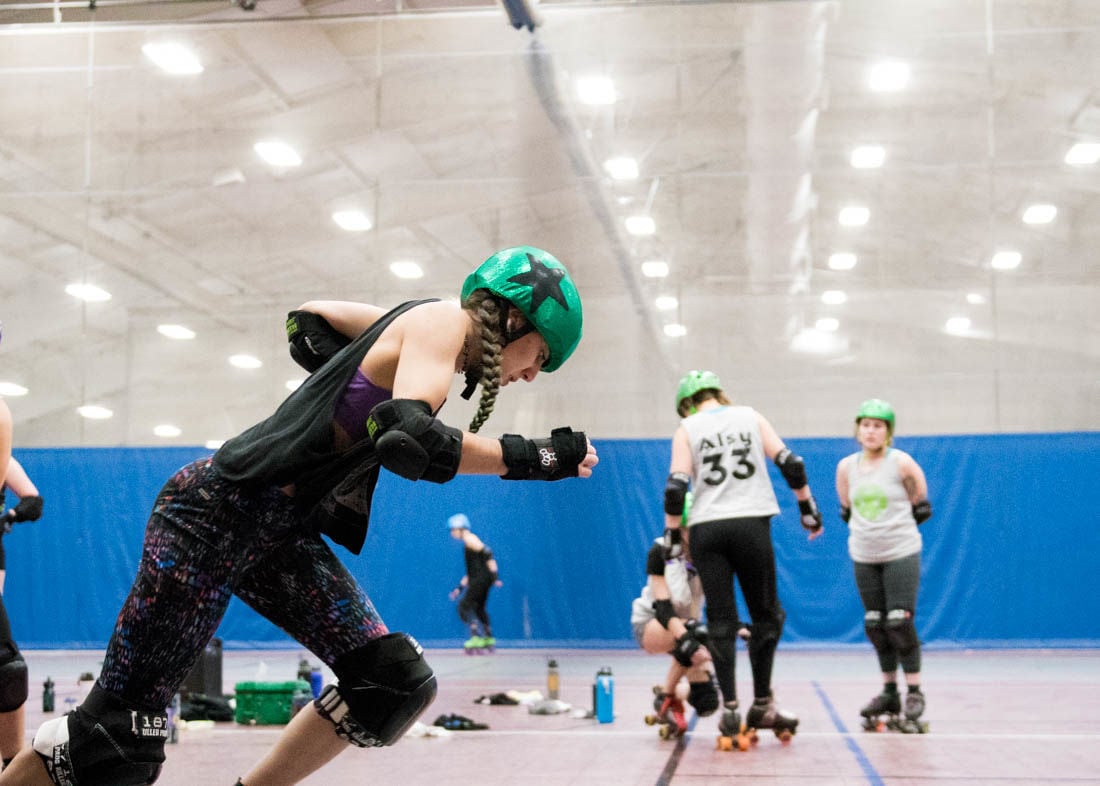 After pushing through blocking skaters, this team member takes the lead skater role for the drill. The Emerald City Roller Derby (ECRD) team practices at the Bob Keefer Center in Springfield, Ore. on Feb. 10, 2020. (Madi Mather) 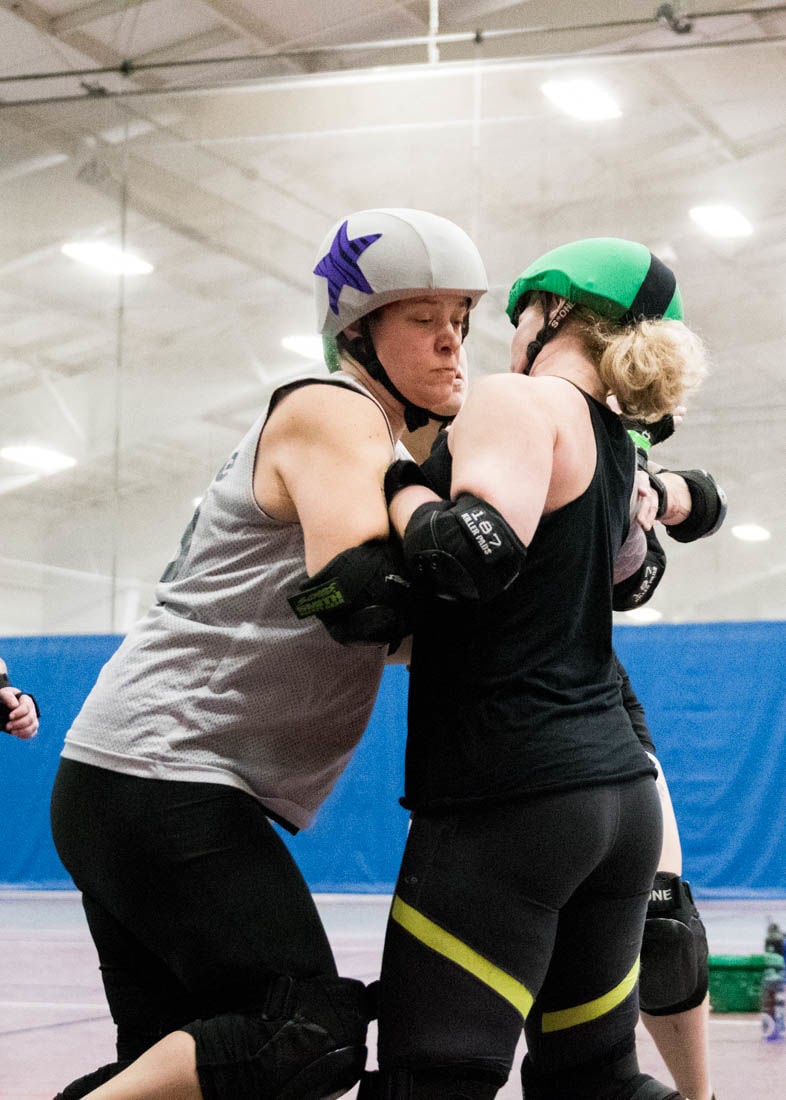 During a contact drill. skaters push for an advantage. The Emerald City Roller Derby (ECRD) team practices at the Bob Keefer Center in Springfield, Ore. on Feb. 10, 2020. (Madi Mather) 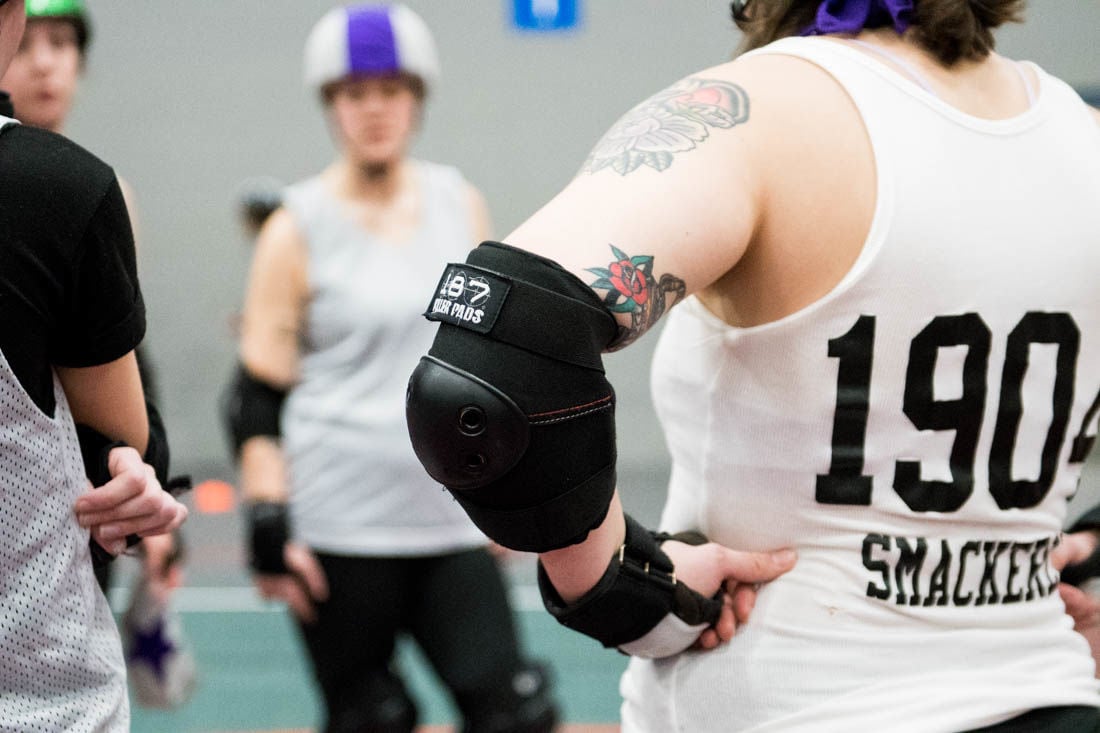 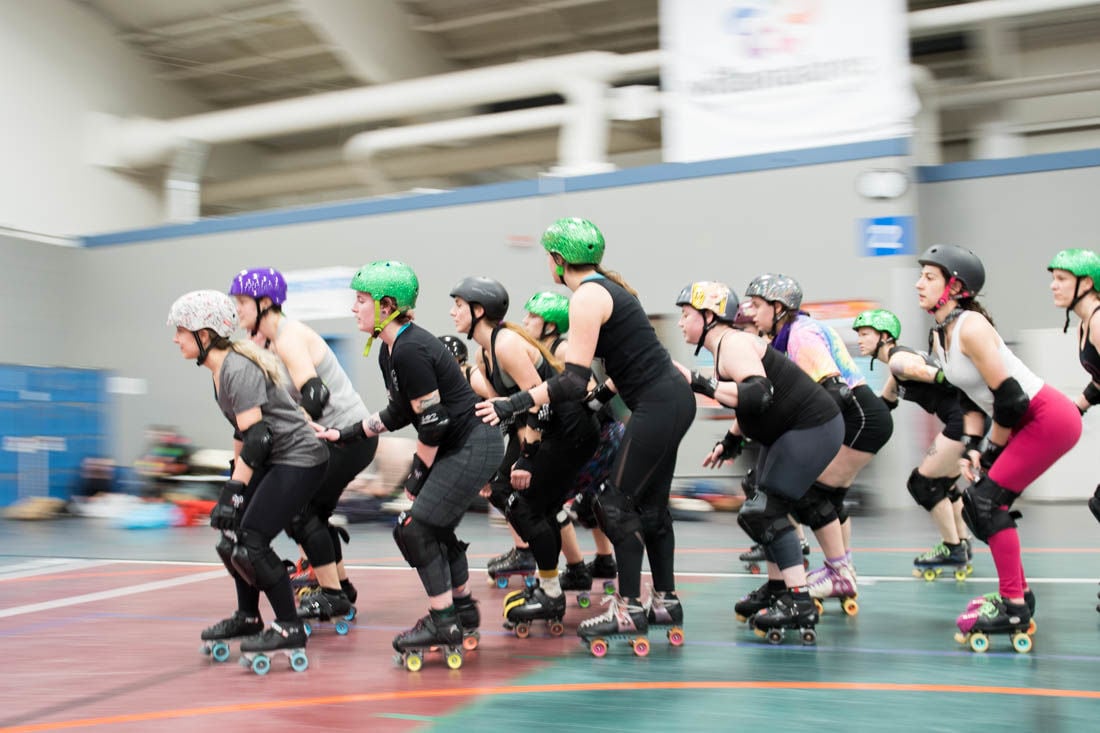 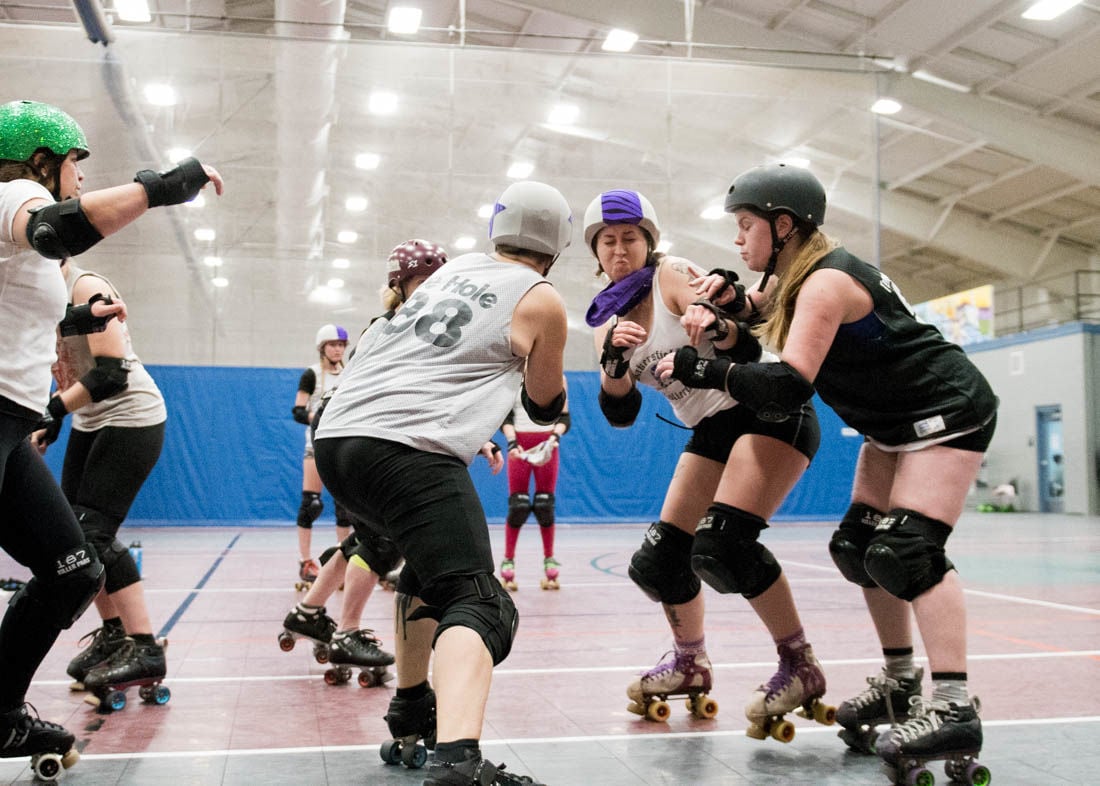 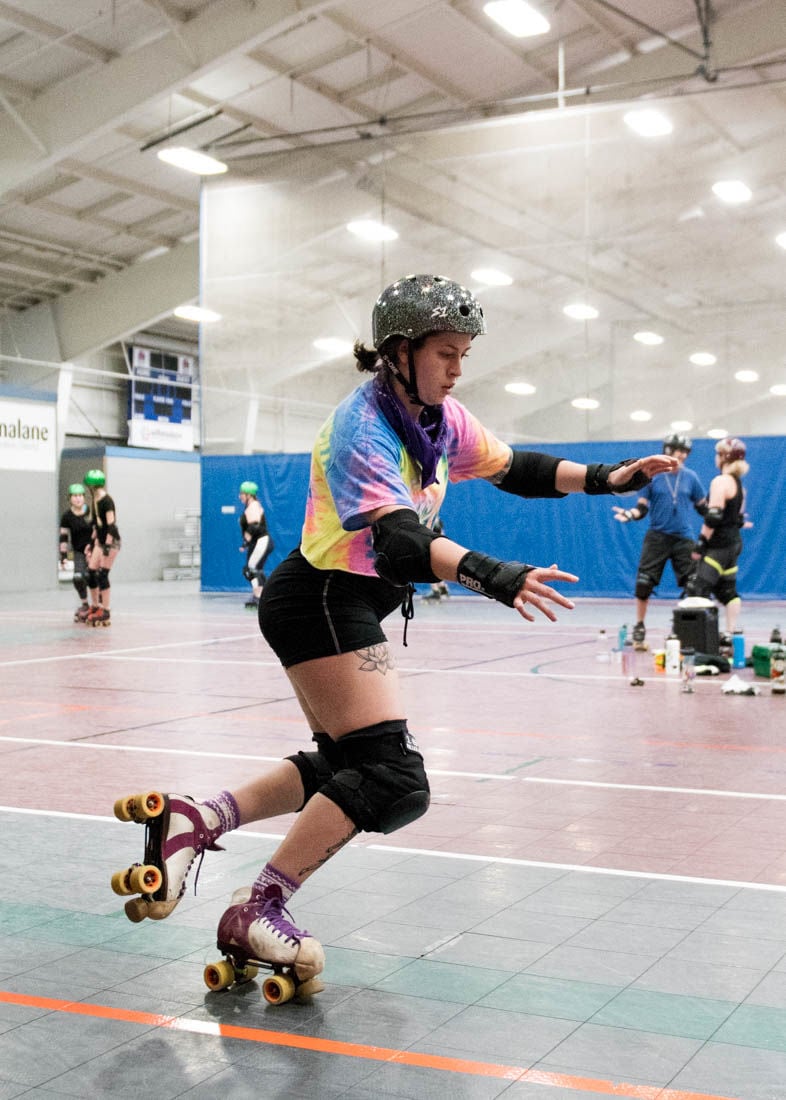 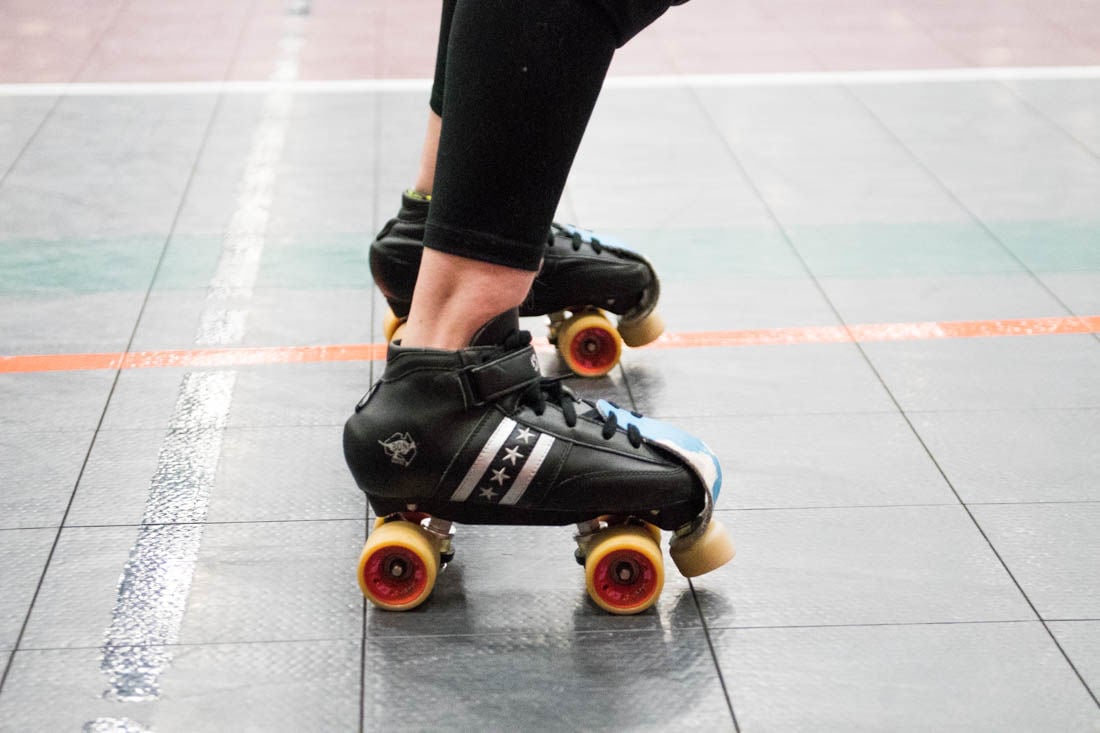 After pushing through blocking skaters, this team member takes the lead skater role for the drill. The Emerald City Roller Derby (ECRD) team practices at the Bob Keefer Center in Springfield, Ore. on Feb. 10, 2020. (Madi Mather)

During a contact drill. skaters push for an advantage. The Emerald City Roller Derby (ECRD) team practices at the Bob Keefer Center in Springfield, Ore. on Feb. 10, 2020. (Madi Mather)

Madeleine Eustis is a University of Oregon student by day. By night, she’s known as Tempo Tantrum. Every Monday and Thursday, she’s at the Bob Keefer Center from 6 to 9 p.m. — knee pads strapped, mouth guard in, skates laced.

She’s a member of Eugene’s Emerald City Roller Derby team. Since 2006, ECRD has provided a space for women, non-binary and transgender people to play roller derby. Initially called Emerald City Roller Girls, the name changed in 2016 to promote inclusivity. Their website reads, “Roller derby is a gift and a passion that is available to anyone who wants to be involved.”

Eustis has been doing roller derby since her freshman year of high school in Nevada because her sister had started and she thought it would be fun to hit her. On top of that, as a 15-year-old girl she looked up to the community of strong women.

At the beginning, though, Eustis struggled with the physical aspect of the game. “There’s definitely a mental obstacle at first,” she said. She struggled at first with having to be aggressive toward other women. “Once you get over that it becomes super fun.”

As a women and gender studies major, she often thinks about the implications of hitting other women in roller derby. “We talk a lot in class about taking up space,” she said. “I think it’s really hard for women to take up space and also take it away from someone else. The whole point of the sport is to hit people and take that space away.”

One of the key elements of roller derby is the physicality of it. It’s a full contact sport, so players are constantly knocking into each other in order to pass the other team.

At Emerald City Roller Derby, not all of the players compete in bouts and tournaments. Some like to come recreationally. For newer skaters like Amber Dahlke, roller derby is a way to get exercise and make friends in the process.

Dahlke, also known as Triple Axel, has been a part of ECRD since Sept. 2019. She had been roller skating since she was four years old, but as an artistic skater. When she moved to Eugene in 2011, derby wasn’t on the forefront of her mind. “It was always in my mind, but I never really pursued it,” she said.

She went to watch a women’s arm wrestling competition in Eugene and spotted the booth for ECRD, which was encouragement for her to join. “There were a lot of things going on in my life,” she said. “It could not have been at a more perfect time.”

Since joining, roller derby has had a positive impact on her life. “It’s given me goals and it’s given me a lot more motivation,” she said. “I brought myself back to being an outgoing person. Everyone is always just so happy. It’s just a great group of ladies, it feels very welcoming.”

Team captain Andi Zeh Condit, or Land Tuna, has been a derby player for eight years. She initially started at Stick Town in Corvallis. But when she moved to Lebanon, Oregon, she would make the hour commute to Eugene four nights a week for derby.

“Everybody that’s been in derby for a while would agree that it puts a strain on your real life relationships,” she said. “It was something I really wanted to do but I am a stay at home mom. It put a strain on my marriage.” Then, she started what she called “The Derby Marriage Contract of 2011.”

“We came to an agreement that a certain number of nights was the maximum for our relationship to stay healthy, and I wouldn’t feel guilty about being gone,” Condit said. “The best part about it was that the practices were later, so I could make dinner, and then I would leave after and give my husband some time with his son.”

Fast forward to 2020, and her then five year old son is now 13, playing on the junior roller derby league in the same gym, with her husband as a coach for the team. Zeh Condit said she didn’t want to push derby on her son, she wanted him to make the choice himself. After watching her skate for eight years, and getting inspiration from the graphic novel Roller Girl, he’s excited to participate in the sport.

Zeh Condit feels a sense of empowerment that’s grown since she began. “It’s so freeing. Skating is the best. I have ownership of my body,” she said. “And control over my feet. Getting successful at something that maybe I couldn’t do very well yesterday or last week. It’s so fulfilling.”

For more information on Emerald City Roller Derby, you can visit their website at ecrg.com.