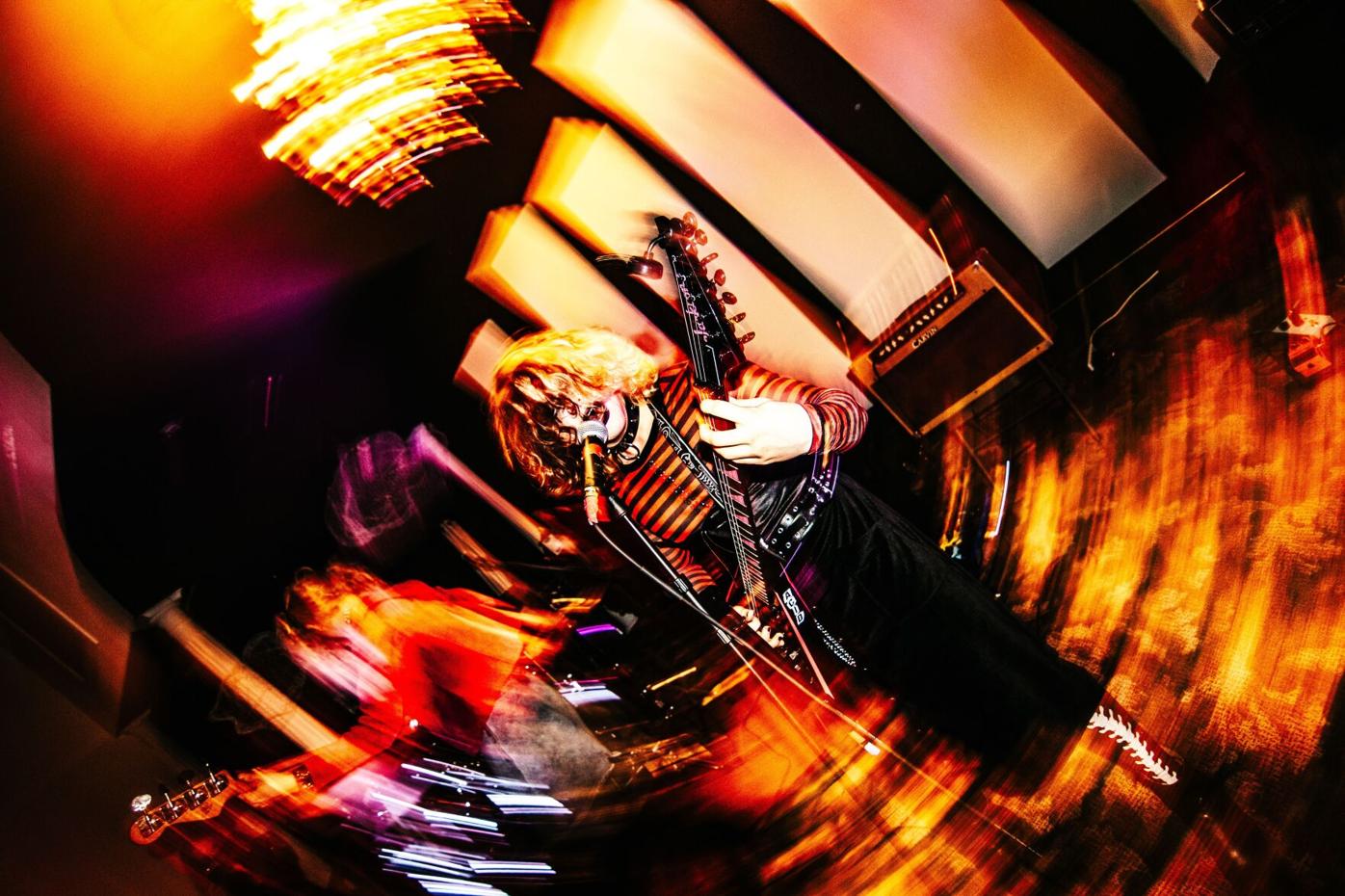 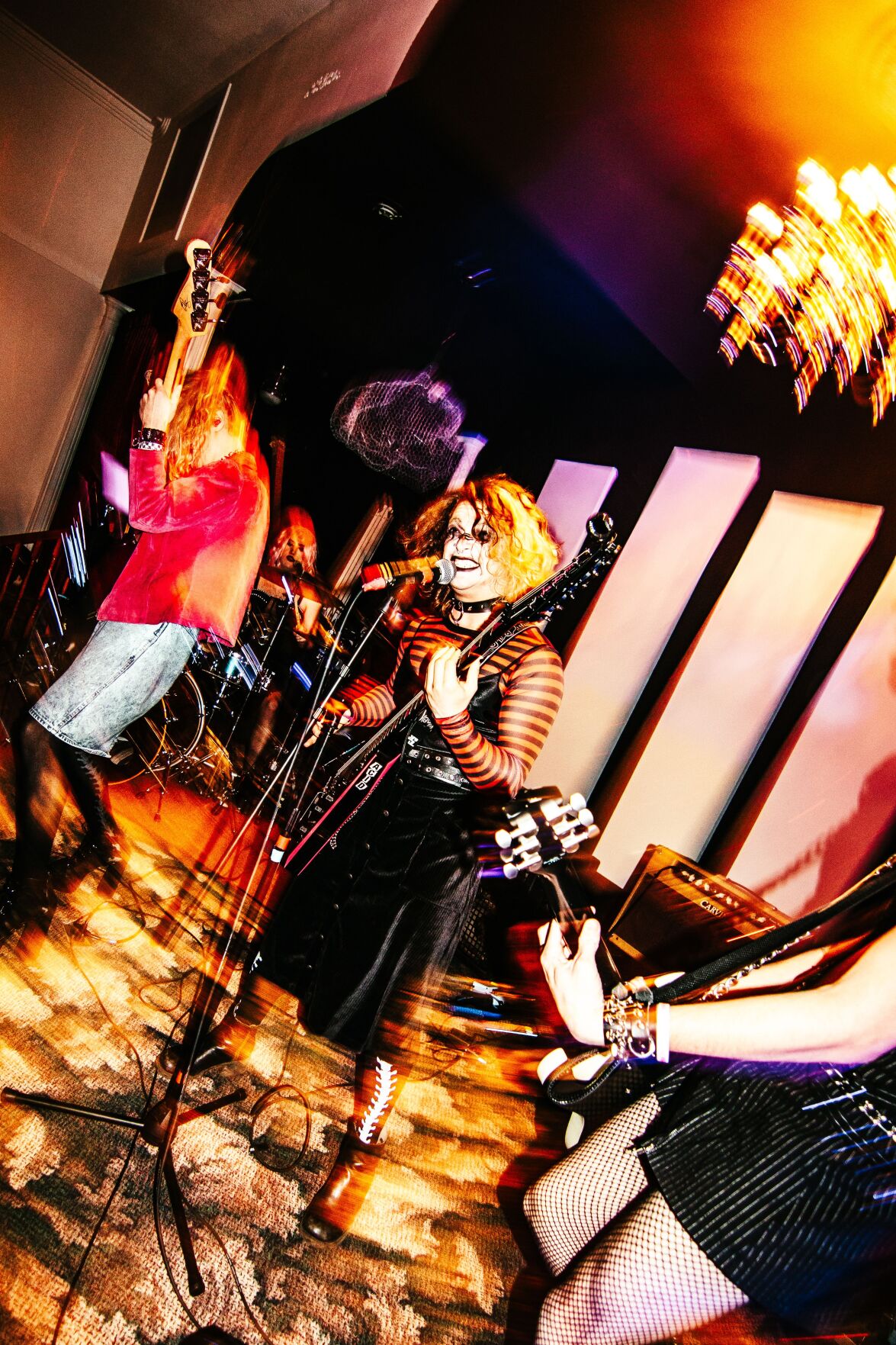 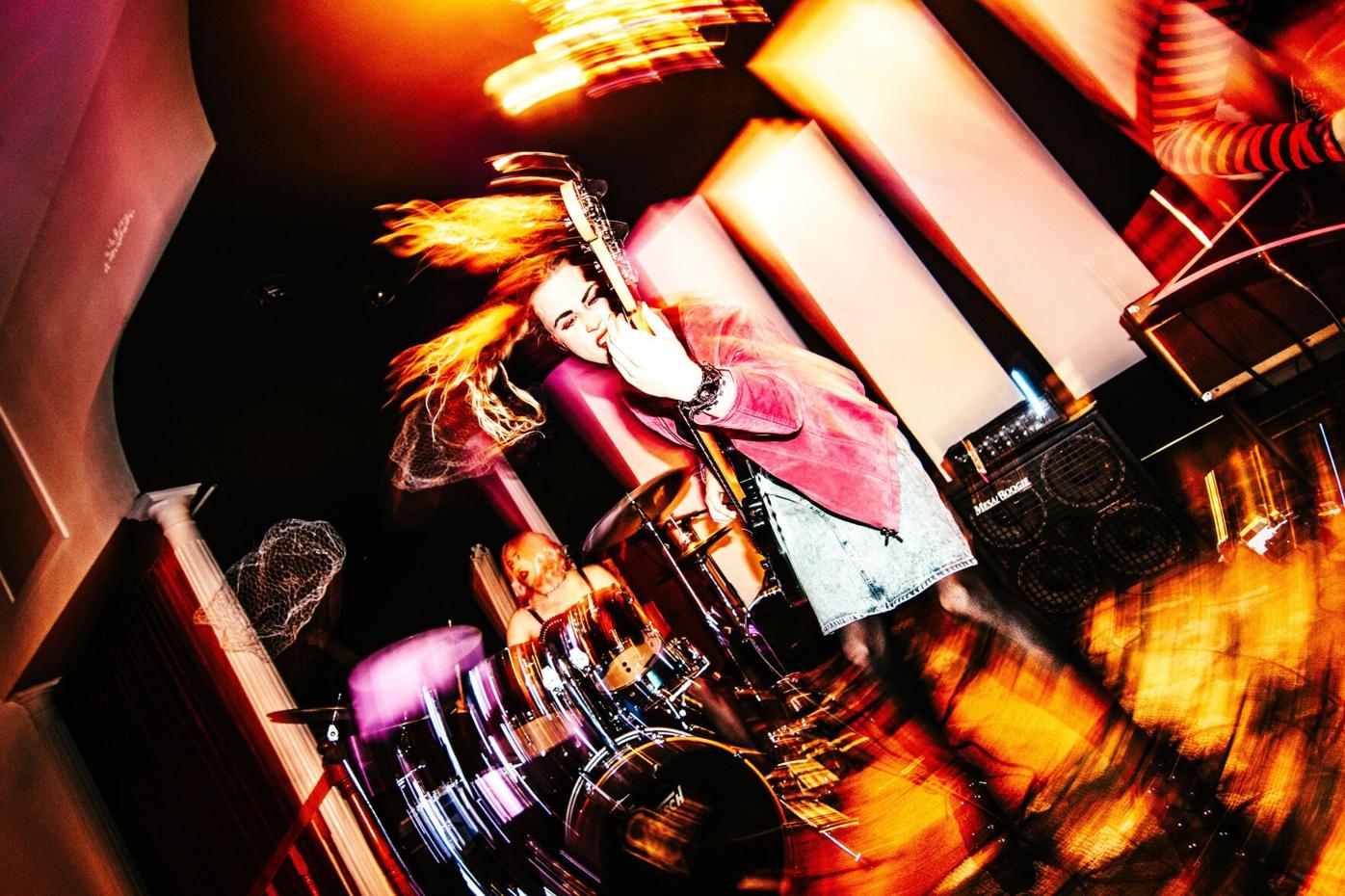 Last Sunday night, at Andale Andale Mexican Restaurant in Portland, Daisy Chained was rolled on stage on an inversion table, handcuffed and ball gagged. Daisy Chained is part of the Eugene local band, DR/UNK. She was accompanied by her four bandmates whose costumes all followed the feminine, sexy, satanic theme, according to the band.

Dakota Seven, who uses they/them pronouns and takes on the persona of Daisy Chained on stage, plays guitar and sings vocals for the Eugene-based band, DR/UNK. The band is a self-described queer, drag-punk band. When performing shows, the band plays original punk music and dresses in drag.

For DR/UNK, performing in drag means emphasizing their femininity through makeup and clothing choice.

“At least for me, Dakota and Isaac, we’ve always been interested in femininity and expressing ourselves that way. I’ve always enjoyed dressing and presenting myself as fem,” drummer Tristan Day, said. “We wanted to incorporate that aspect of ourselves into our art.”

Each of the four band members has their own drag persona they embody on stage, influencing how they look and even their stage personality — Day becomes Patricia Violence; bassist Isaac Andreason becomes Miss Treat; guitarist and vocalist Chris Heer becomes Suzie Slaughter; and Seven becomes Daisy Chained. The band puts on makeup and gets dressed together before each performance, listening to Andreason’s playlist “Let’s Go Girl.”

The band formed the summer after the members graduated high school in Aug. 2019. Andreason is credited with bringing the idea of drag to the band, although who thought of combining the words drag and punk to create the name “DR/UNK” is a bit of a debate.

“I brought the idea of drag to the band,” Andreason said. “I had been through periods of my life where I had started feeling comfortable purchasing makeup and then not comfortable enough to go out in it because I had all these fears about people’s perception of me. So I’d always hide that part of myself.”

Since the inception of their band, all four members attested to the fact that the audience has been completely supportive and has helped to create a safe space to perform. That is the band’s goal as well: to create a space where people, especially queer people, feel safe expressing themselves.

“For me, drag is an opportunity to explore the spectrum of my gender identity and sexuality,” Day said. “And to encourage a safe space for people to be themselves.”

While drag performance and queer culture are intrinsically linked, they are not synonymous. DR/UNK does identify as a queer band, although they noted three-fourths of the members identify as queer.

The band highlights the intersections of drag and punk through its performance — punk music has roots in pushing boundaries and questioning gender norms. The genre is known for dark makeup on people of all genders and political songs. DR/UNK’s music is definitely that.

The unique music makes you want to jump up and bang your head to lyrics such as “gender is fake” and song titles such as “Killing World Leaders.”

On Saturday, Nov. 13, DR/UNK released its first album. Over the summer, the band rented a studio in LA and recorded “seven songs in 6 hours,” according to Heer.

All the songs on the album are short, but pack a punch. The band delivers some of the traditional sounds of punk — screamed lyrics, heavy guitar and a consistent drum beat. “Piss Mountain Democracy” opens with a snapping sound followed by a cough and the words “I don’t know” before jumping into a heavy guitar riff.

All the songs on this album hold true to DR/UNK’s theme of being political and unapologetically authentic.

“The music we make is so heavy and aggressive, and that’s kind of why we want to do drag,” Andreason said. “Cause it’s kind of like the most extreme type of gender performance.”

Nika is a writer at the Arts & Culture desk. Send her an email if you know of any local artists or events that should be featured!