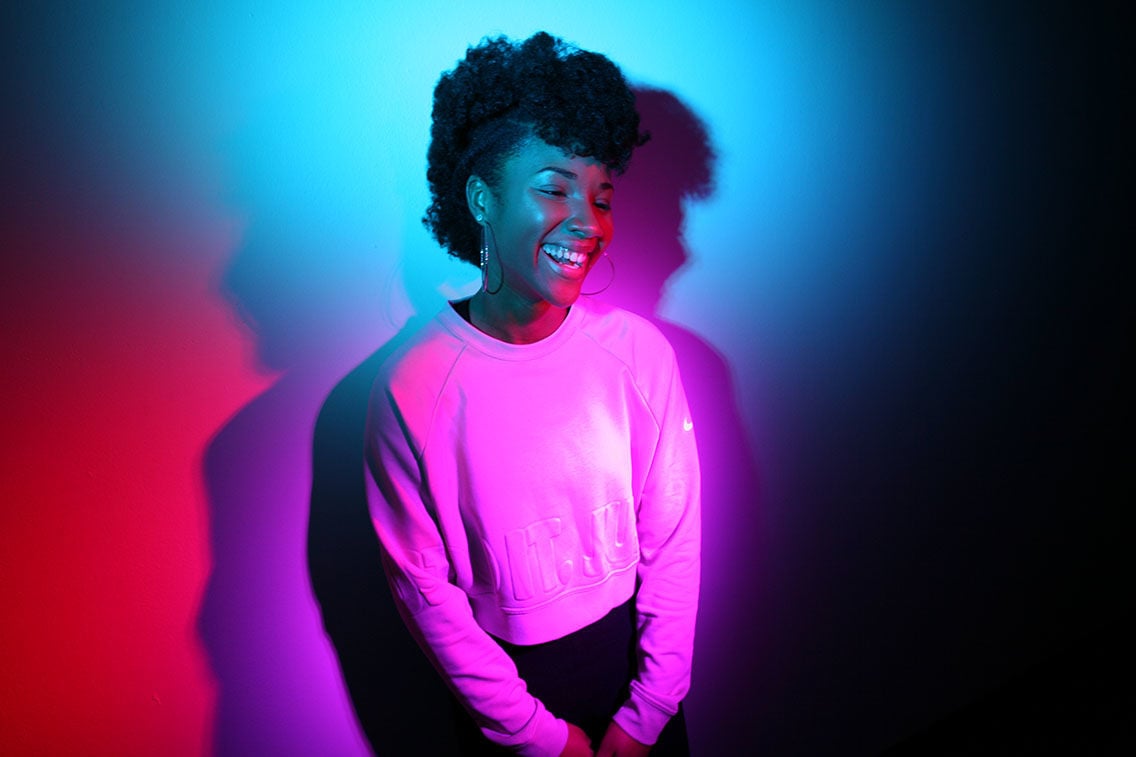 Photo taken of senior Jaria Martin for the “Don’t Touch My Hair: Expressions of Identity and Community” exhibit at the JSMA. (Photograph courtesy of Ugochukwu Akabike) 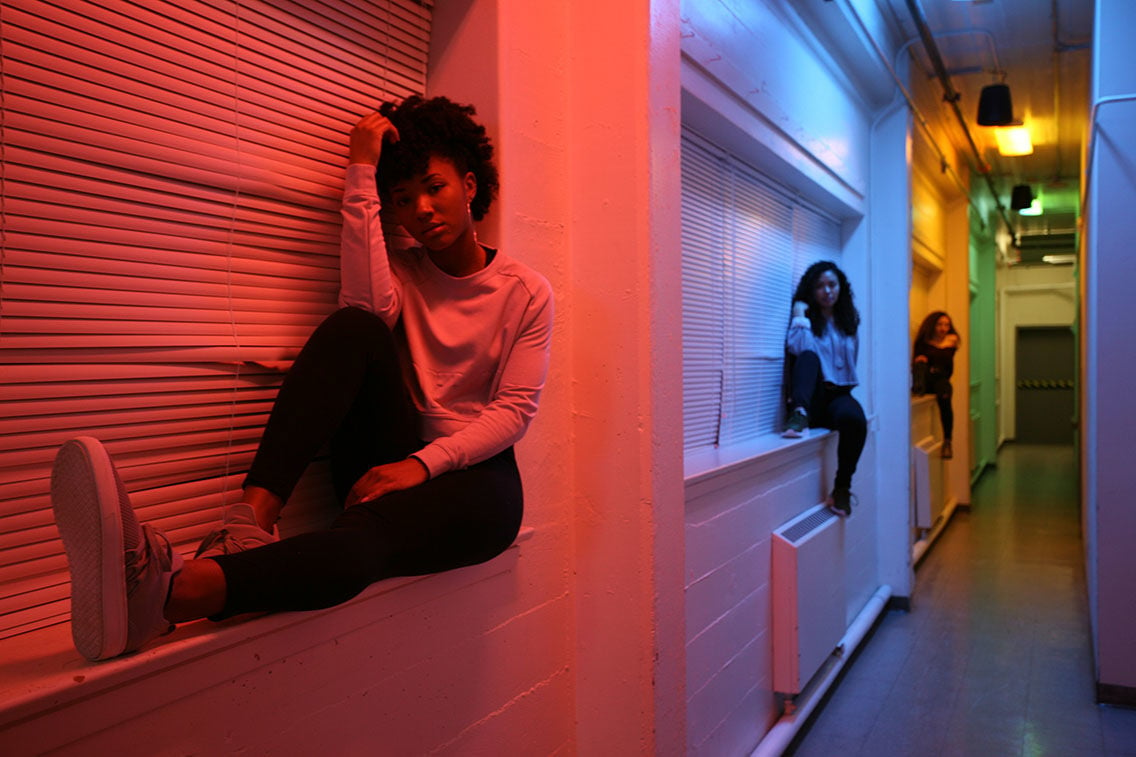 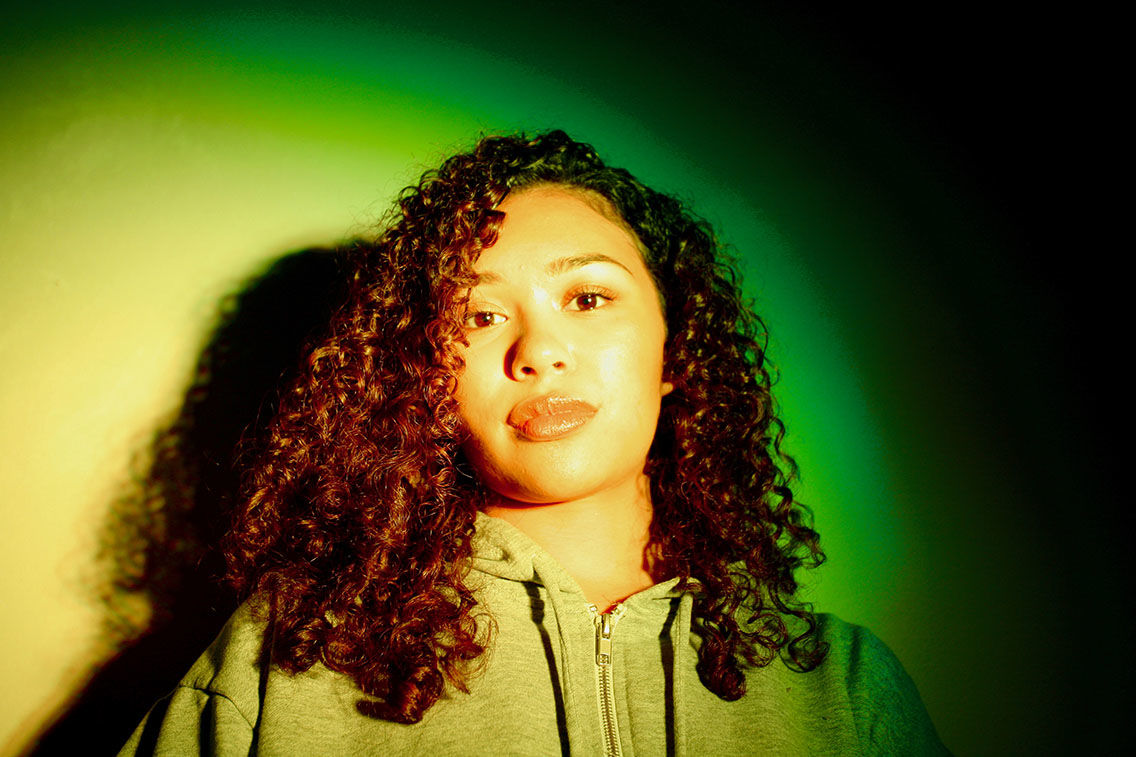 Sophomore Aayana Fuller poses for a photo that highlights her hair as a form of self-expression. (Courtesy of Ugochukwu Akabike) 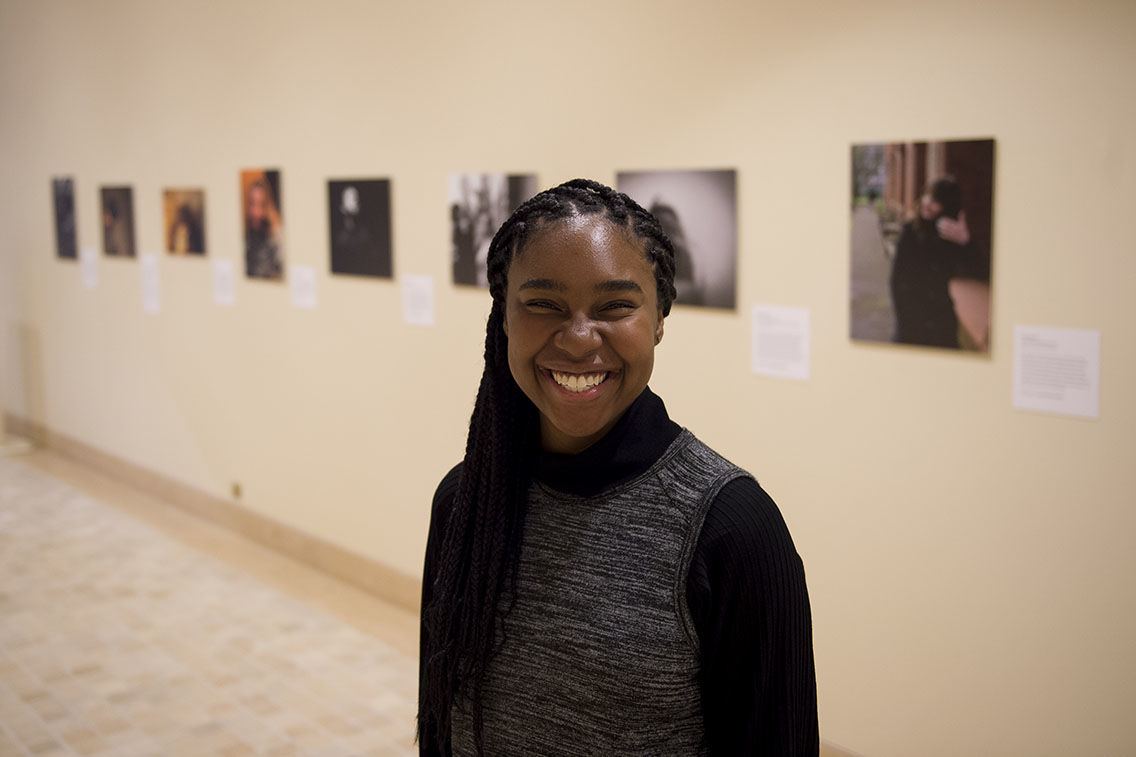 Photo taken of senior Jaria Martin for the “Don’t Touch My Hair: Expressions of Identity and Community” exhibit at the JSMA. (Photograph courtesy of Ugochukwu Akabike)

Sophomore Aayana Fuller poses for a photo that highlights her hair as a form of self-expression. (Courtesy of Ugochukwu Akabike)

“Your hair is your glory,” Kristen Clayton’s mom told her over and over. She would hover above her daughter’s head and work her hands through the thick, waist-length curls. For Clayton, these moments were a sacred, ritualistic practice.

In Melbourne, Florida, where Clayton grew up, she was the only African American student at her private elementary school. The school required kids’ hair be kept “neat,” — a rule that by nature, excluded her curly and kinky afro. Clayton remembers routinely sitting in front of the television for up to 10 hours as her mother washed and conditioned her hair before straightening it with an iron comb that was heated over the stove.

“It was a way for us to bond but it was also difficult because you knew that it wasn’t necessarily for aesthetic pleasure,” Clayton said. “It was so that I could survive in an environment when kids wanted to touch your hair or play with it because it was so different.”

Clayton — now a first-year graduate student at the University of Oregon — didn’t fully grasp that her hair was curly until she was in the 11th or 12th grade.

“To not know yourself in your natural state, it’s very strange,” she said.

During her role as co-curator of “Don’t Touch My Hair: Expressions of Identity and Community,” an exhibition on display at Jordan Schnitzer Museum of Art, Clayton saw her own experience reflected in the exhibit.

The exhibit “investigates the politics of hair, racialized beauty standards, hair rituals and the differences in expectations between men and women with regard to hair,” said guest curator Meredith Lancaster.

Five student-photographers took photos of UO students and faculty who spoke of their hair as a significant part of their identity. These photos, paired with individual hair stories, line the walls of the JSMA.

The idea for the exhibition began circulating after Janelle Crouch, a hairdresser and motivational speaker from Atlanta, Georgia, spoke at UO Ethnic Hair Care Day in May 2017. JSMA staff had a conversation with Crouch, UO student group Black Women of Achievement and Vice President of the UO Division of Equity and Inclusion Dr. Yvette Alex Assensoh to develop the purpose and plan for the project.

Sophomore Aayana Fuller poses for a photo that highlights her hair as a form of self-expression. Photo taken by Ugochukwu Akabike during the creation of the “Don’t Touch My Hair” exhibit at the Jordan Schnitzer Museum of Art. (Courtesy of Ugochukwu Akabike)

The design of the exhibition revolved around five community conversations that took place in January 2018. At the conversations, UO students and faculty gathered at JSMA to discuss the personal significance of one’s hair. Clayton facilitated these conversations with a list of questions, and assured those in attendance that they were in a safe space to be vulnerable.

“I’m really emotional, but for this project I had to abstract my own emotions because there were so many other emotions going on,” she said. “Whether that’s of the guest curator, the artist, the participant — everyone else was really emotional, so I had to feel nothing.”

Responses varied dramatically. According to Clayton, one participant spoke about feeling suppressed in a major that is dominated by men who have a regulated professional appearance. Another participant opened up about being from a poorer family, and having to wear a buzz cut to avoid lice.

Lancaster was approaching the discussions from a primarily political angle. She was taken aback when one student explained that her relation to hair was wrapped up in a sexual assault incident. The student was physically disarmed by the attacker’s hold on her long ponytail, leaving her relationship to her hair tainted and wrapped up in trauma. Cutting her hair was a symbol of the weight and pain being lifted.

“I was really stunned; I hadn’t thought about that. It added an extra layer to all the things that could be tied up in a person’s hair,” Lancaster said.

Following the discussions, the student photographers conducted photo shoots with those in the community who were willing to have their stories included in the final exhibition.

One photographer, junior Malik Lovette, shot each of his photos with his iPhone X. Another photographer, sophomore Ugochukwu Akabike, set down his phone to use a real camera for the first time. He had only been pursuing photography seriously for around a year.

“Some of the first few sessions you could tell that I was nervous and I didn’t really know what I was doing,” Akabike said. However, as the project progressed, he gained confidence and was able to give clear direction.

Participant Jaria Martin, senior at the UO, said given the current political climate, she felt honored to have her hair celebrated in a state where at one time it was illegal for Black people to reside. “…To have my university be able to showcase this to serve as an education piece, and not just a celebration piece, I think that really encompassed everything, and I was just thankful to be a part of that.” Martin loves her hair; she is known for her confidence and ability to rock the natural look.

Next to the photos in the exhibit, there are quotes from the community conversations. In one hallway, a small table adorned with an open journal stands opposite of the photos. Inside the journal, viewers of the exhibit are given space to reflect. One writer said that their hair is limp and lifeless, and that it often reminds them of their inadequacies. “But it is the color of warm, honeyed afternoon sunlight,” they continued. “And that I appreciate.”

Clayton said that her own story was revealed through each story shared. She recalled her time studying abroad in Paris when she took out her braids overnight. The next day in class, her classmates, some of whom she’d known throughout her entire college career, didn’t even recognize her with a new hairdo. She struggled to dissect what that meant.

“I felt such a disconnect between my identity, my hair and how other people saw me,” Clayton said.

A little while later she saw a beautiful Black woman with a big and bold afro walk onto the platform in the train station. Clayton instantly noticed the shameless confidence and fearlessness with which the woman carried herself.

“I looked at her, and then I saw my self in her that I had suppressed for so many years,” she said.

Similar to Clayton, Lancaster grew up in an environment where her hair was something that set her apart from her peers. She remembers being ridiculed and bullied by other children; they called her a lion because of her unruly curls. Lancaster is still working on wearing her natural hair with pride, instead of feeling like a target for judgment and insults. She curated the exhibit hoping that the exhibition would evoke a discussion leading to deeper understanding of others.

“We have to spend more time thinking about the things that make us the same,” Lancaster said.

Isaac Leve, a senior at UO, said he was encouraged by many of his friends and teachers, as well as his mother, to participate in the exhibition. He describes his hair as “a huge ‘fro” and says that he grew it out because he wanted to. And as a white male, he acknowledged that this is a luxury many students aren’t able to exercise.

Another one of the photographers, sophomore Jasmine Jackson, said she was passionate about helping create the exhibition because she recognized that it is not common for Black people to talk about their hair by choice. She enjoyed collaborating with each of the other photographers and curators, noting that each person had their own strengths and utilized them to encourage others who were experiencing doubt.

“I walk into a room and feel as though my hair openly tells the story of my developing confidence and carefree Black girl mentality,” she said.

The purpose of the exhibit was not to restrict this conversation to one cultural group, but to show that all UO students and faculty are connected, and can understand each other better by opening up about their relationships to hair, according to Clayton. Participants in the exhibition came from all different backgrounds, ethnicities and genders.

Whether curly or straight, black or brown, frizzy or flat, long or short, hair can be a flag representing identity and culture. Individual stories may be scarred and complex, or light and casual, yet they can all carry weight and significance that is deeply kneaded into one’s identity.

Clayton was tired of trying to assimilate herself into a white environment. After graduating high school, she cut her hair.

“It was kind of like a scar, like all those years of me straightening my hair was still on me,” Clayton said. “I’m done with surviving. I want to thrive.”

Don’t Touch My Hair: Expressions of Identity and Community runs in JSMA until May 13, 2018. There will be one final community conversation on May 2 from 5:30 to 6:30 p.m. This discussion is open to all UO students and faculty and intended for reflection and evaluation of the exhibition.