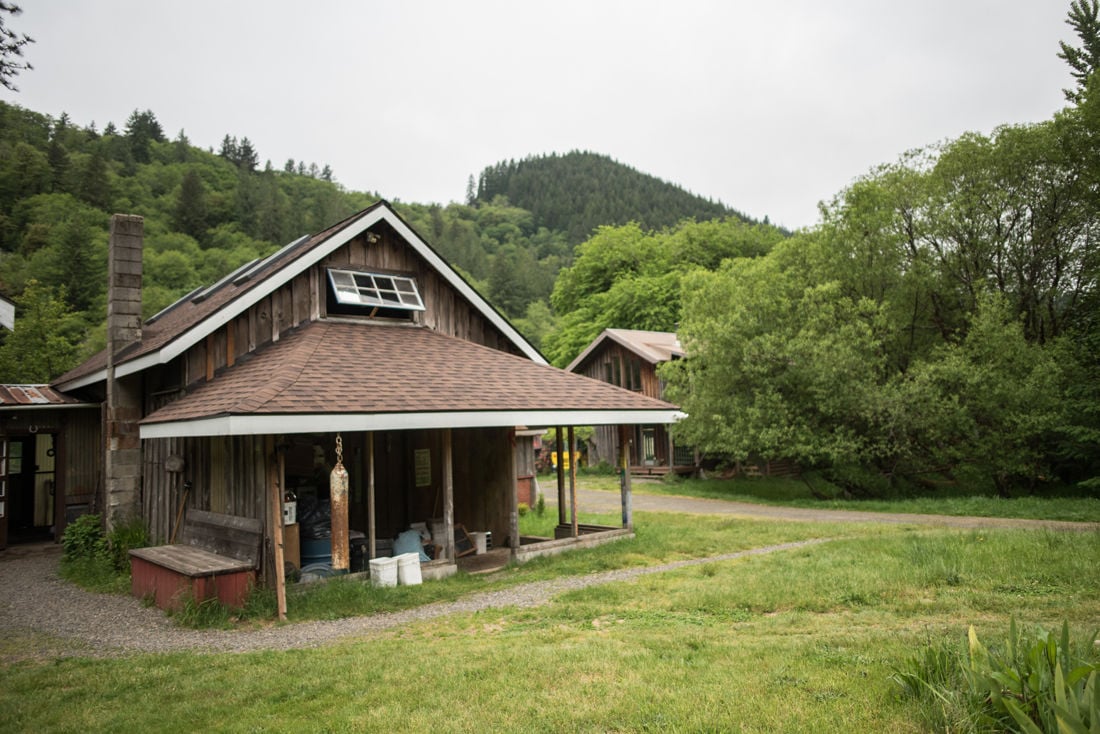 Located in the small area of Deadwood, Ore., Alpha Farm is very secluded and surrounded by tree-covered hills. (Marissa Willke/Emerald) 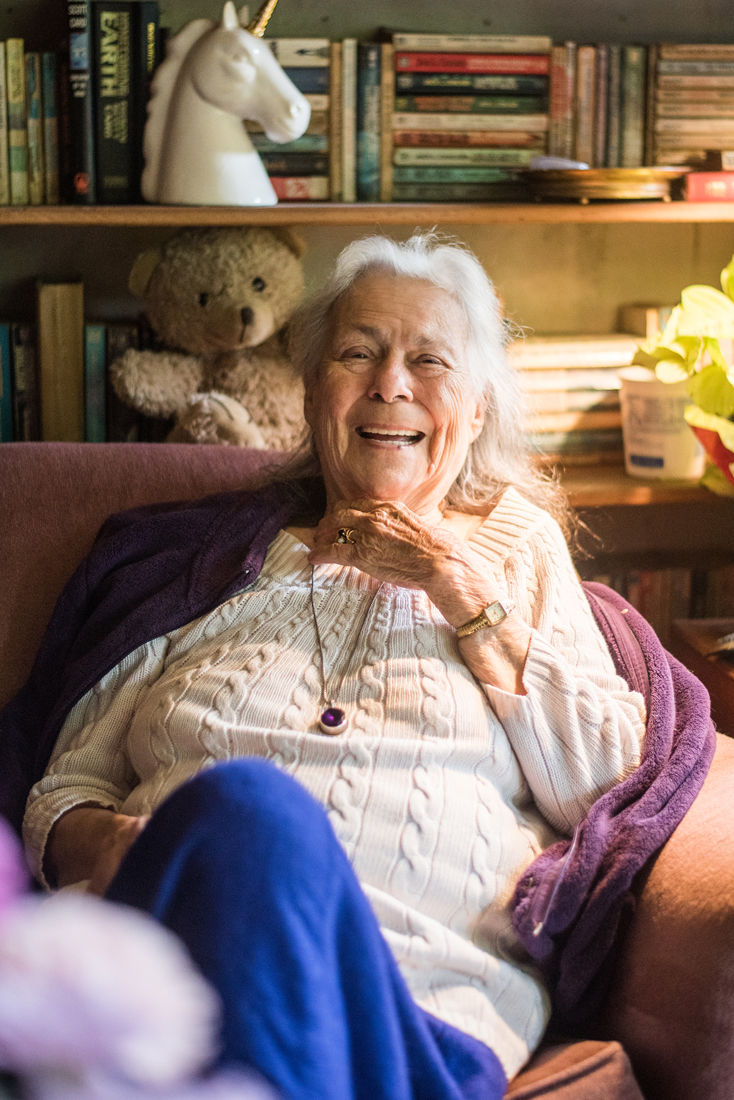 Caroline Estes is one of the original founders of Alpha Farm, which was started in 1972. (Marissa Willke/Emerald) 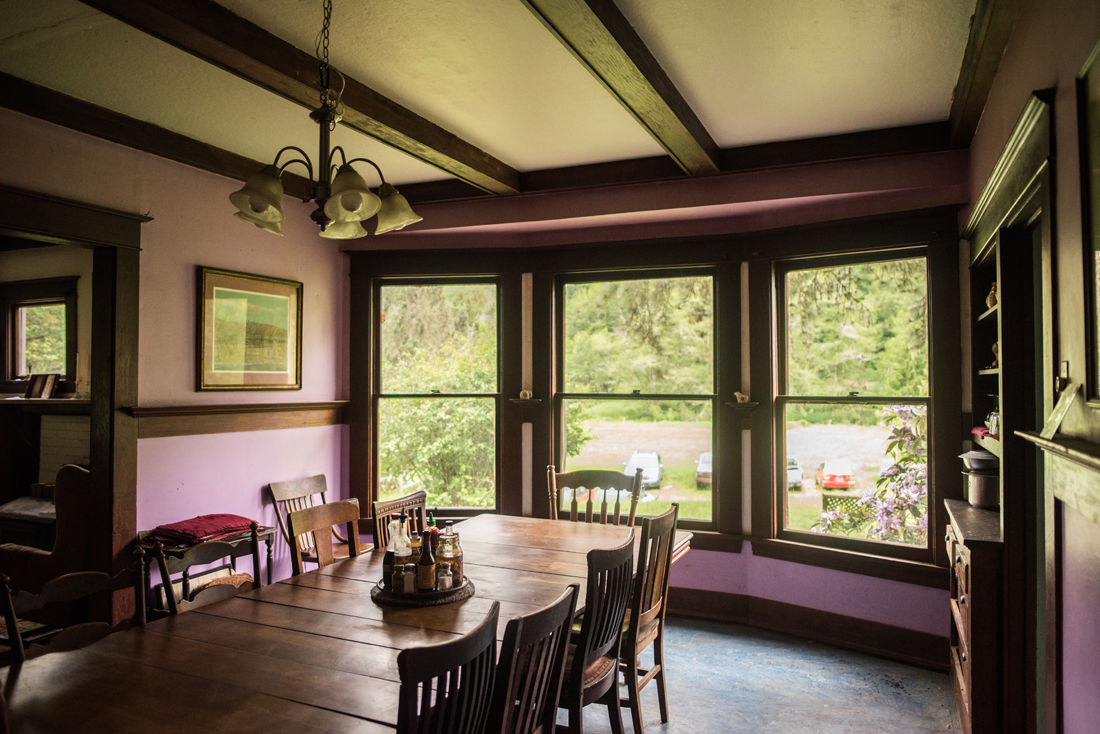 It is tradition at Alpha Farm for the members to gather almost every evening for a community dinner. (Marissa Willke/Emerald)

Walk across a footbridge over a creek in Deadwood, Oregon, and you’ll find yourself in another world.

Nestled in the middle of Western Oregon sits a 280-acre co-op called Alpha Farm. Since 1972, Alpha has been an intentional community for people of all types to come out and work together. Their goal is to live a simpler life, free of the distractions and chaos of the regular world.

The whole place can really only be described as magic. It feels like stepping into another time, with a garden, a greenhouse, over 10 beautiful buildings, a meditation trail, cats, chickens, dogs, two renovated school buses and no cell service. The place is ethereal.

The members have community dinners each night, which they take turns preparing. Before each meal, they all hold hands around a circle and kiss the hands of the people next to them to symbolize teamwork.

One of the founding members, Caroline Estes, 91, decided to start Alpha 47 years ago.

Estes was in Philadelphia when she had the idea. After planning out the vision for a year with like-minded friends, Estes and her group knew they either wanted to start a community in Vermont or Oregon. A few of them took a vacation out to Oregon and eventually came across the property in Deadwood. Upon returning to Philadelphia to raise money, they bought the property and turned it into Alpha Farm. On April Fools’ Day in 1972, which Estes says she feels “is a very appropriate birthday,” the first member, Linda, arrived. After that, the rest of them gave up their jobs to move to Alpha.

According to Estes, the purpose of Alpha is to have a place for people to come and learn how to do community work “so when the time comes that we need to organize, people are trained to do it.” Estes has a background in activism and teaching community work.

In the ‘70s and ‘80s, Alpha was present in Lane County. A lot of people knew about it and respected what those in charge were doing. Even so, it took some effort to get to that point. At first, the conservative community in Lane County was skeptical of a commune popping up in the middle of Deadwood.

One way the Alpha members combatted this was by starting a restaurant in Mapleton called Alpha Bit. They started it six months after they arrived in order to be connected to the community. “We didn’t want to be just those strange people up Deadwood,” said Estes.

As soon as some people started getting coffee there each morning, the rest of the community began to trust the commune more, and Alpha Bit eventually became a staple in Deadwood.

The restaurant survived 45 years, up until 2017, when they had to close it down due to financial reasons. “A large number of people were upset. Really upset. Because it was a place they’d come to depend on. So I think [closing] was a mistake,” Estes said.

In the beginning, there were only about 10 members at Alpha. There was a large wave of people traveling to different co-ops in vans on the road, so they saw a lot of people come through over the first few years. Estes estimates at least several hundred visited — some stayed, some people went on, but over seven years, they eventually climbed up to 30 members. Estes moved her hand up and down like a rollercoaster and said that’s how communities are always going to be. “It’s been a very interesting 47 years.”

Another fluctuation in members happened this past year. In September, the co-op was at only five members, but has since grown to its current size of 14. Alpha member Dorion Bauman was part of that group of five almost a year ago.

Bauman moved to Alpha from St. Petersburg, Florida, 10 months ago, when a friend of his, Genesis, found the co-op online. Bauman made the decision rather spontaneously but said he is glad he did.

“We wanted freedom to create, and to make a living off of what we create, and to bring life back to the place,” said Bauman. “Genesis and I arrived with a vision for the place before we even saw it.”

Bauman’s favorite thing to do at Alpha is fix things. He’s currently working on refurbishing an old trailer and painting it turquoise.

Other than building, Bauman has a love for networking and is a part of Alpha’s PR committee. “I’m kind of obsessed with expanding Alpha’s network as far as I can,” he said.

Bauman exists somewhat in two different worlds. Almost every weekend, he drives to Eugene to go to see live music with his friends there. He loves making connections with the people there but finds it difficult to explain to the people at Alpha. “It’s a difficult balance, but it’s getting easier,” said Bauman.

The roles of Alpha members are determined by the energy that they bring to the group. “As long as it’s bringing value to the farm, that’s your job for the week,” said Bauman. “We don’t have roles, we don’t have labels.”

In a consensus-based intentional community, decisions have to be decided on completely as a group. If one person doesn’t agree with a proposal or an idea, then it doesn’t happen. This can often mean that it takes a long time for things to happen, but Alpha members find it necessary to make sure everyone is on the same page.

Currently, some members want to rent out spaces at the farm to be airbnbs or camping spots, but others contest the idea. The argument is that it would raise more money for the farm as well as provide more exposure and awareness. But some fear that letting strangers in will counteract the purpose of the community and bring negative energy into the property.

One of the most common ways people communicate is on the chalkboard in what they call the mud porch. “Everyone walks through the mud porch 100 times a day,” said Bauman. He said that much of the day is taken up by running around the farm, helping people with on projects and working together on them.

For more information on Alpha Farm, email alpha@peak.org or visit @alpha.farm on Instagram.