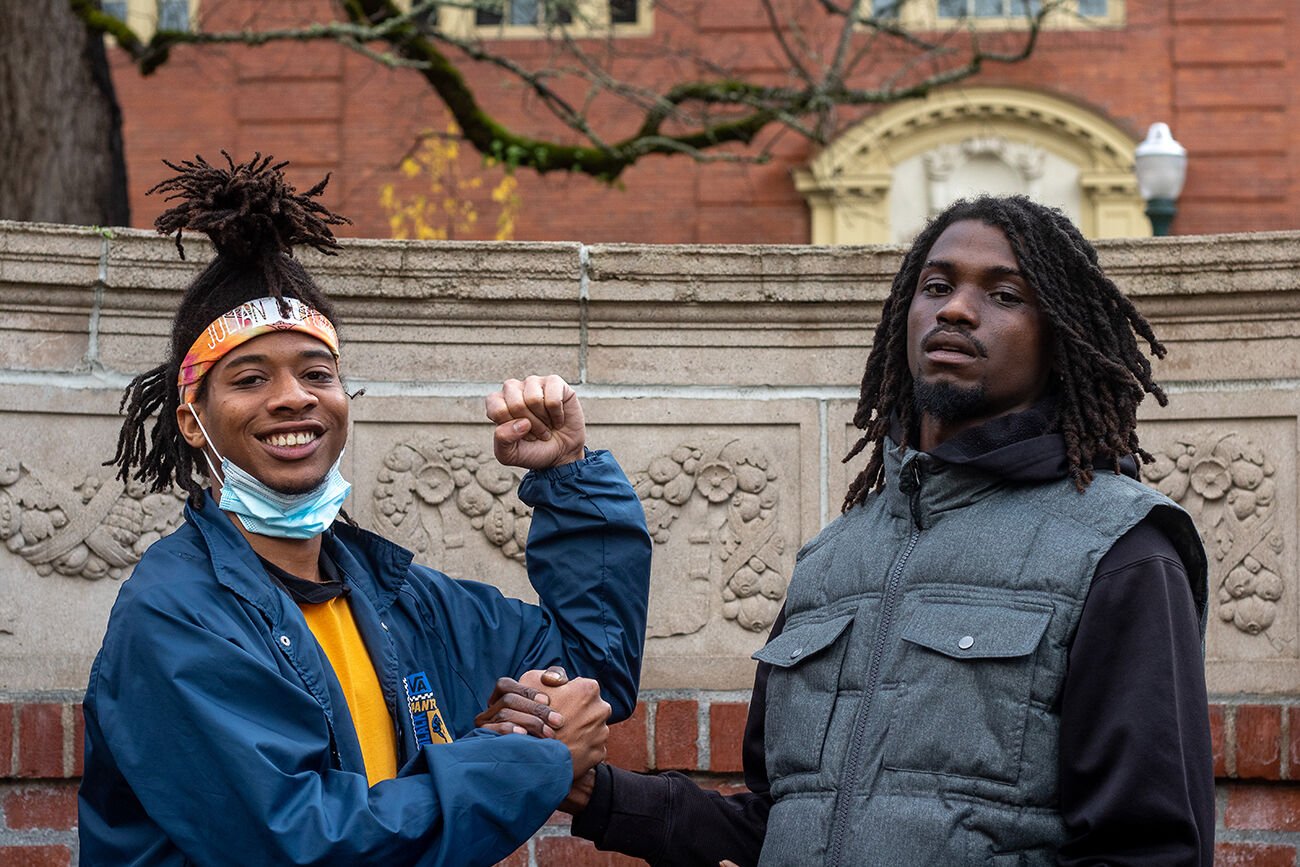 Julian Outlaw poses with his manager, Treylon Day. They have been working together for the past 8 months on various projects. Eugene’s grassroots hip-hop scene is often overlooked, but it hasn’t stopped artists from continuing to share their own unique voice with their music. (Will Geschke/Emerald) 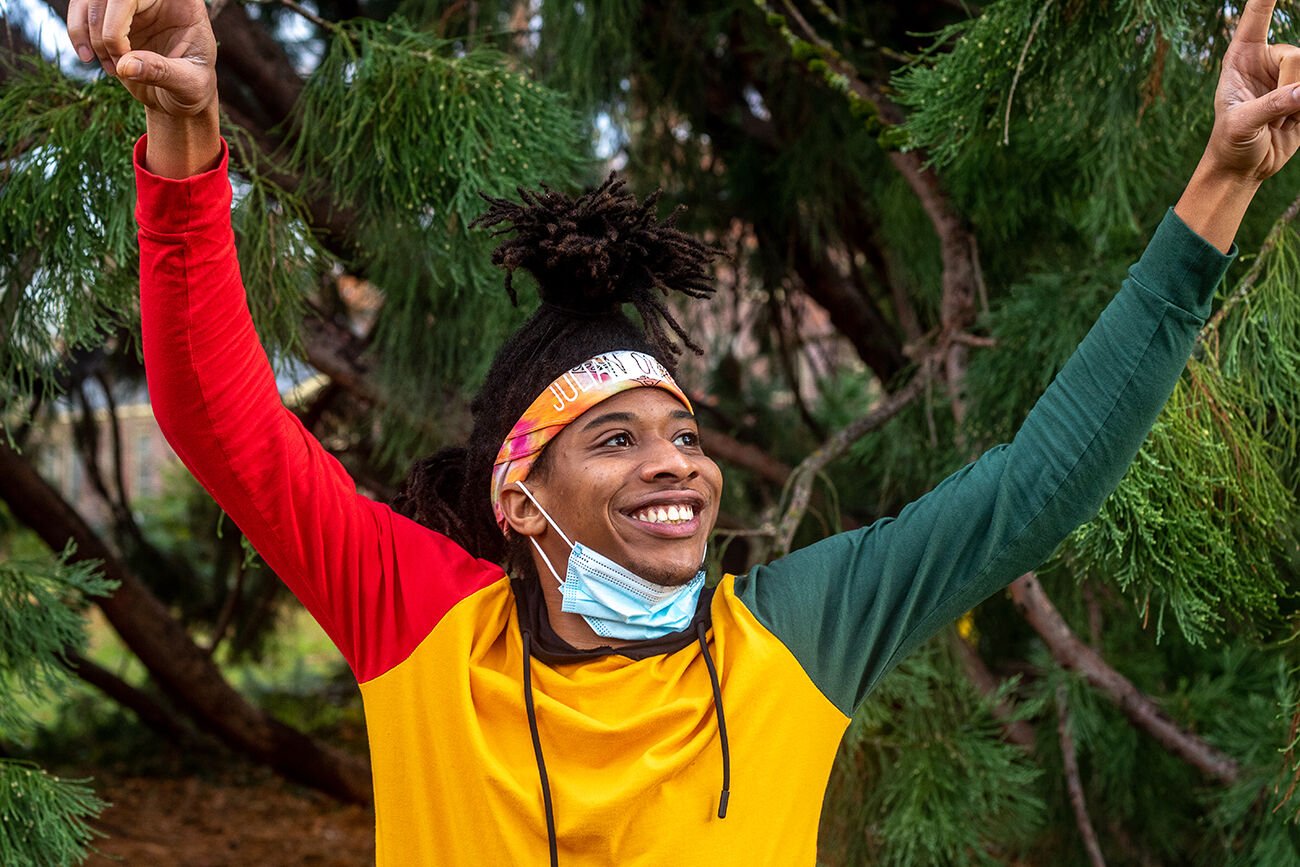 Pic 5: Julian Outlaw, who has been releasing music for the past 6 years, has been finding more success over the past year than ever before. Eugene's grassroots hip-hop scene is often overlooked, but it hasn't stopped artists from continuing to share their own unique voice with their music. (Will Geschke/Emerald) 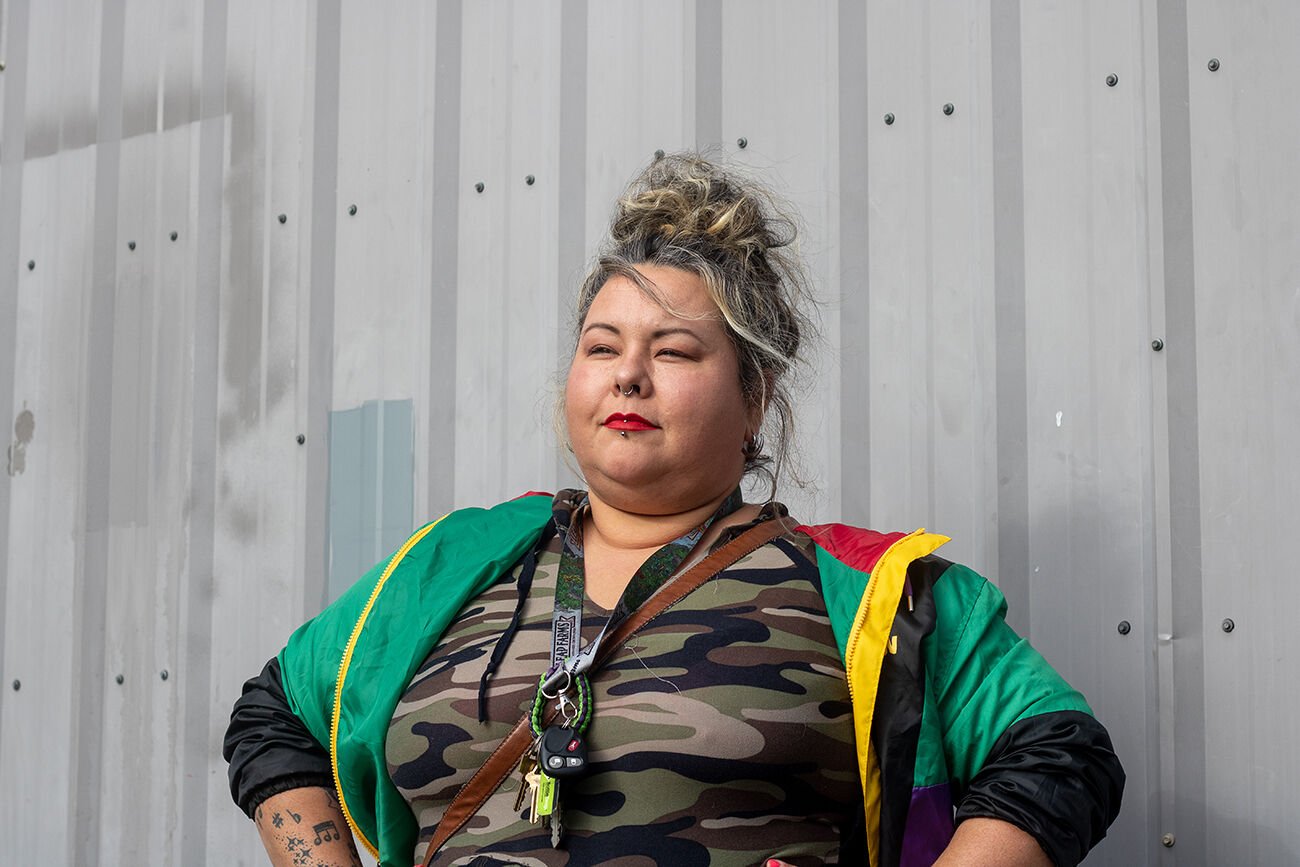 Elena Leona is a local independent musician. Her new music video, "Ain't Drowning", releases Monday, Nov. 23rd. Eugene's grassroots hip-hop scene is often overlooked, but it hasn't stopped artists from continuing to share their own unique voice with their music. (Will Geschke/Emerald) 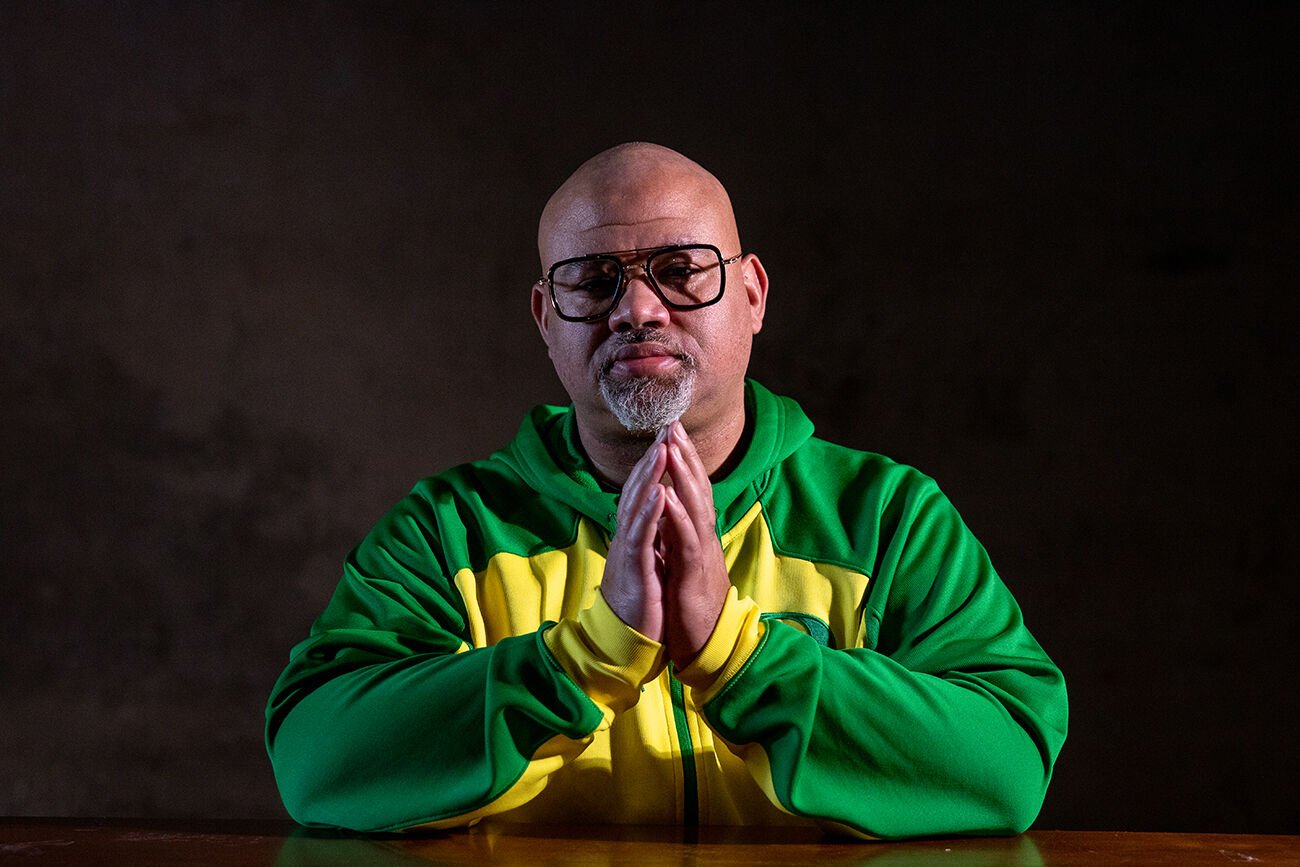 Michael Clint, also known as Michael Kay, has been a part of the Eugene hip-hop scene since the early 1990's. Eugene's grassroots hip-hop scene is often overlooked, but it hasn't stopped artists from continuing to share their own unique voice with their music. (Will Geschke/Emerald)

It’s easy to say that rap music isn’t the standard genre in Eugene. Many of the house shows and local venues prefer to showcase jam bands, bluegrass or punk music. Although the norms have been set, there are artists in the area who want to break through the mold. Artists in Eugene face a few barriers when trying to get started, such as the close-minded attitude some performers have experienced at local venues. Negative stereotypes and a lack of diversity also affect the ability for the style to grow in the city, yet artists still work hard to establish a scene.

Sometimes it can be hard to come up with a rap name. For Julian Outlaw, it was simple.

“Oh, that’s my name,” he said before holding up his Texas driver’s license. “First days of school used to suck because kids thought I gave a fake name.”

Outlaw started performing using his given name in 2017. While watching an open mic at the Hi-Fi Music Hall in Eugene, he asked a showrunner if they ever had rappers perform there and was invited on stage immediately. His 16 bars of rap impressed the band so much that the saxophone player invited him back on stage to jam with the band for another 45 minutes.

This appearance became bi-weekly, then weekly. Outlaw eventually had the opportunity to host a midnight sypher, a chance for artists to freestyle rap, at the club. He took this show model to The Poker Lounge in Eugene but had difficulty seeing his big picture plans because of the costs.

“I was working for peanuts, which was hard,” Outlaw said. “It just felt like I was spinning my wheels.”

Outlaw left for Portland in fall 2017 to seek more opportunities to make money with music.

“I stopped listening to the people telling me Portland was scary,” Outlaw said. “I’m from Houston!”

In Portland, he gained some traction in the hip-hop scene. He helped organize the first Juneteenth celebration in Gresham. There he met Treylon Day, an event and talent promoter who convinced him to come back and try out the scene in Eugene once again. While he was booking shows, the pandemic has hampered his opportunities once again.

While Outlaw has found a community of like-minded artists, he still can’t get over the culture shock that comes with moving from Houston to Oregon. The lack of diversity can be challenging, especially as a start-up artist.

But Outlaw isn’t discouraged by this fault in diversity. He stays positive by living by his mantra of L.A.M.E. — or “living above my expectations.”

“Instead of wasting energy focusing on the problem, I’m focused on finding solutions,” he said.

Outlaw’s music has influences from rappers such as Tyler the Creator, Chance the Rapper and Freddie Gibbs. He is comfortable rapping in a lower register while also being able to intermix falsetto accents to contrast. On his newest album, “Couch Mode,” Outlaw creates a serene space for listeners to get lost in. The mixture of instrumental tracks and tracks with Outlaw’s voice guides listeners through this dream-like environment.

Michael Klindt was lucky enough to see the full journey that Eugene’s hip-hop has taken over the years. When he first discovered he could rap, he was transitioning through a lot. At the age of 12, his mother died, which forced him out of Tacoma, Washington, to Eugene.

The lack of diversity “was a huge culture shock," Klindt said. "Going to middle school with two other Black kids, being called the 'n' word for the first time; it's a lot for a 12-year-old to process."

Luckily, Klindt was invited to perform at a high school show at the Sheldon Community Center.

"I never heard myself on a mic before that," he said. "I just closed my eyes and did my verse."

The room full of high schoolers praised Klindt for his recently discovered voice.

"It plucked me out of the darkness I was in, and it pulled me back," Klindt said.

In the ‘90s Eugene had every aspect of hip-hop culture, Klindt said. There were graffiti artists, b-boy dancers and MC's, and cassettes were the hottest commodity. Although hip-hop wasn't big in the whole city when Klindt started making music, it became an infectious part of popular culture as time went on. The best part about the scene Klindt describes is the way artists crafted their sound. In the ‘90s, it was about creating a unique sound instead of copying the most popular stylings.

Klindt developed his sound by rapping with melodies and choruses, a style that is now known as Neo-Soul. While his verses were in a typical 16 bar structure, he would incorporate choruses with melodies to add a different hip-hop music element.

What's disappointing about Eugene's hopping hip-hop scene is that it no longer exists. Klindt attributes this to a lot of the digitalization that happened in the music industry. With every artist available online, it became less about trading tapes and more about following the most famous artists, Klindt said.

He also described how venues fluctuated their availability to hip-hop shows. "We'd have poppin’ hip-hop shows at the W.O.W. Hall," Klindt said. "For whatever reason, it was harder and harder to facilitate those shows."

He attributes the lack of availability to the negative stereotypes associated with hip-hop and the people who perform it. He also acknowledged that performers weren't always the most respectable guests; sometimes fights broke out during performances.

As a producer, Klindt collaborates heavily with artists from across the state. As shows were being canceled due to the pandemic, he began to focus on his album with SageCrow entitled SageCrow III. The group has modernized the ‘90s style of hip-hop. With instruments from around the world and minor production, the group can capture the Wu-Tang Clan sound mixed with Bob Marley and the Wailers.

Elena Leona considers herself a chameleon for whichever genre she falls under: When she wants to perform hip-hop music in Eugene, she sometimes has to mask it not to get an immediate rejection.

"At some venues, I have to call it urban groove," Leona said.

She feels lucky that her sound can fit in any venue. Eugene can be closed-minded when it comes to the variations within hip-hop music, Leona said. One venue, which she preferred not to name, told Leona the only hip-hop act they host is Marv Ellis, a White "folklore" hip-hop artist, according to the bio on his website. Leona attributes this closed-minded perception to the stereotypes that rap connotes.

"People think it's all bitches, blunts, 40s and gang banging," Leona said. "There is that type of hip-hop, but not all hip-hop is like that."

Like many artists, Leona had her performing schedule wiped clean by COVID-19. Instead of using this time to be sedentary, she has brought back a track she was supposed to release in 2018. The track, "Ain't Drowning," comes out at the perfect time: late November, Leona said. While many people are struggling because of the pandemic, she sees her song as a reminder to not let oneself sink.

The track has also allowed her to film her first music video. While it was challenging to film during the pandemic, she did her best to make it work. A small crew gathered to film the video at an Airbnb in Portland. While at first she worried about her hair, makeup and even if she appeared sweaty, she realized it was pointless to fret about the flaws. She just had to perform to the best of her abilities under unprecedented circumstances.

"I was so nervous, but when it all came back, I was like, 'Holy shit, this looks so good,'" Leona said. "It was just a battle of the insecurities."

Leona didn't discover the idea of digital music until 2005, and she didn't realize she could learn to perfect her skills at Lane Community College until 2011. She found beat production through her now fiance. Her music combines her ability to play guitar, create loops with her beat pad and add other instruments with the help of her mixer.

Leona has gained most of her skills from listening to other musicians and emulating Etta James’ singing. While Leona is passionate about making hip-hop, she has learned how to mask some aspects of the genre to gain more traction for her own musical career. Hip-hop is overlooked in Eugene, but they are still artists like Leona who are willing to fight to ingratiate it into venues across town.