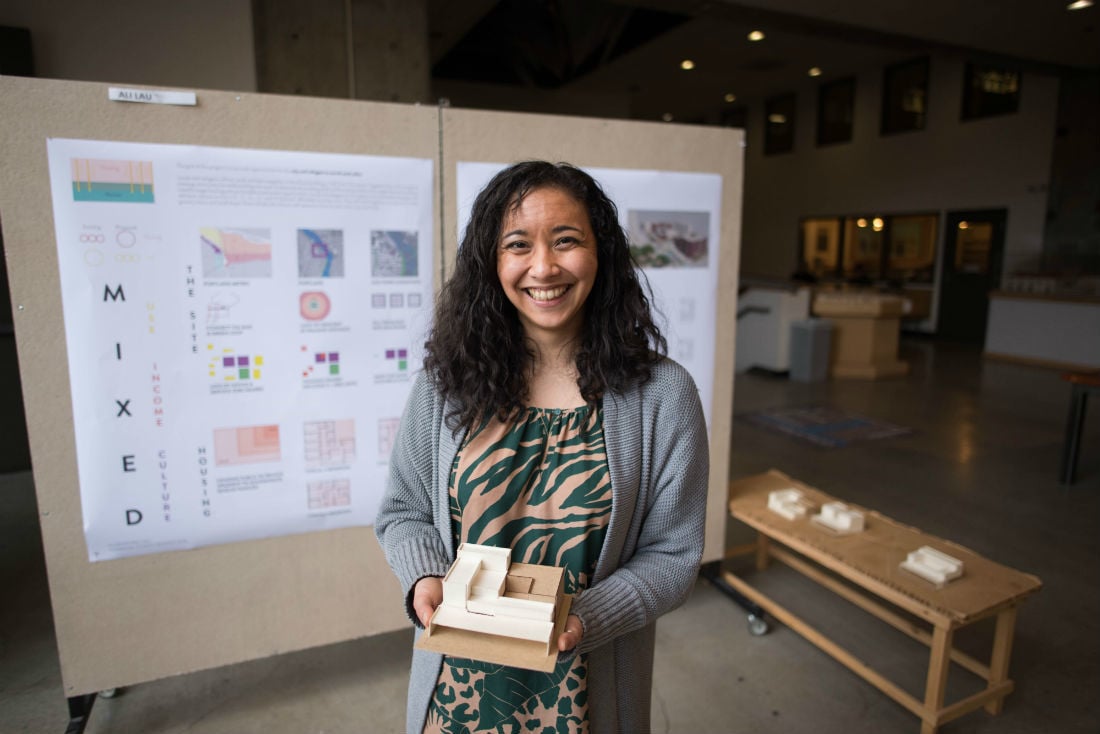 Ali Lau, an architecture graduate student, holds a model of her project. She received four nominations to be featured in an Emerald edition honoring women in the UO community for Women’s History Month. (Phillip Quinn/Emerald) 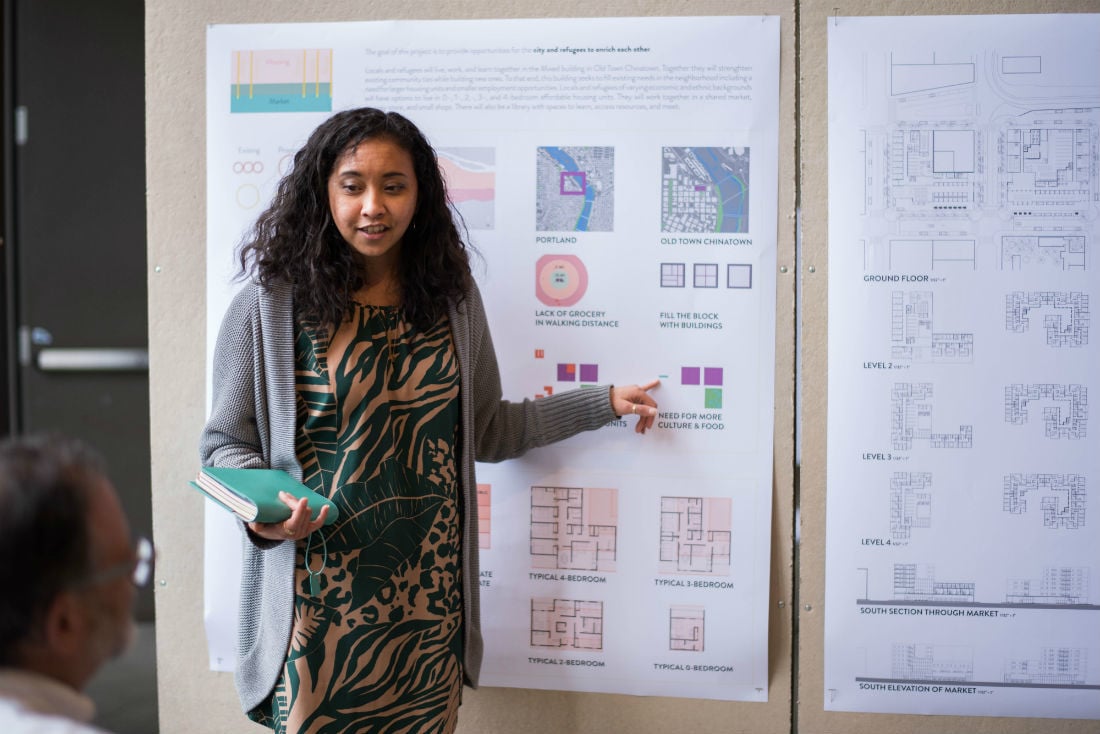 Architecture graduate student Ali Lau explains the importance of bringing culture to a community during her final presentation. (Phillip Quinn/Emerald)

Ali Lau, an architecture graduate student, holds a model of her project. She received four nominations to be featured in an Emerald edition honoring women in the UO community for Women’s History Month. (Phillip Quinn/Emerald)

Architecture graduate student Ali Lau explains the importance of bringing culture to a community during her final presentation. (Phillip Quinn/Emerald)

The Emerald asked the University of Oregon community to nominate outstanding women to celebrate as part of Women’s History Month. Our newsroom chose one woman to honor from a pool of nominees who are making a significant impact at UO with their integrity, courage, innovation, creativity, spirit, smarts, leadership, hard work and ambition.

Ali Lau was nominated four separate times for speaking out on issues of inequity, bias and race at UO. Read about her work below, and find profiles of the other nominees here.

High above the coruscating waters of the Pacific Ocean, the plane curved northward, carrying Alexandra Lau home. As the shores of Honolulu tilted into view and the lush green archipelago of the Hawaiian islands stretched across the horizon, Lau began to cry. Her chest ached.

It was the first moment in which she began to understand the depth of her intrinsic connection to her home and land as a Native Hawaiian woman.

She was returning for the first time since leaving her all-Native Hawaiian private preparatory high school to attend Hampshire College in Massachusetts.

Throughout childhood she dreamed of leaving Hawai’i behind to live in New York. But when she finally left the cocoon of her warm island home, she was struck with the cold reality of life as one of the most underrepresented peoples in the United States.

“I grew up not knowing I was a minority,” Lau said. “I’m Hawaiian, Chinese, Filipina, Portuguese, Russian, Welsh and Native American — I’m very mixed, but what I identify as is native Hawaiian, and it took a long time for me to even really realize what that meant.”

At Hampshire, she struggled to find any faculty to take her seriously. She watched her rich, white friends navigate the academic system with ease.

“For someone coming all the way from Hawai’i from a fairly middle-low income family, it was really hard for me to fit into that,” Lau said. “I had a friend whose dad was donating hundreds of thousands of dollars to the school, and I saw him excel.”

But it would take Lau years to understand and express what she was experiencing.

She transferred to St. Joseph’s College in Brooklyn, where the diverse atmosphere of New York City welcomed her. Lau graduated in 2010 with a bachelors in mathematics. Now a 29-year-old graduate student at the University of Oregon in her final year, Lau is earning two  master’s degrees from the College of Design, one in architecture and the other in community and regional planning.

“Everything I do is based on my identity of being native Hawaiian,” Lau said. “There’s been a huge movement in Hawaiian renaissance for us to remember as a people who we are and what the power is in that.”

American society stigmatizes Native Hawaiians as “fat and lazy,” and sometimes Native Hawaiians internalize these stereotypes about themselves, said Lau. But the last 30 years have seen a resurgence and reclamation of cultural heritage. She intends to use her technical architecture and planning skills with an indigenous lens to push the Honolulu community toward sustainability.

It wasn’t until she moved to Eugene that her experience of being a minority crystallized.

“Being here brought up a lot of doubt for me,” Lau said. “Doubt that I was capable to be here and to do this, doubt that I would be able to finish, doubt that I even was a valuable citizen.”

She felt it in everyday moments, like being ignored during a visit to the dentist. She was isolated as a woman of color in her academic department. On top of the stress of grad school, she was usually the only person of color in her classrooms. During discussions, other students talked over her, and she found her ideas dismissed and overlooked by faculty.

“It’s below the radar. And if you aren’t looking for it, and if you don’t have the language for it, you don’t really know it’s happening. But it is still happening to you,” Lau said. “So many of these little experiences — whether you know they’re happening or not — they are having an effect on you.”

Architecture and planning graduate student Ali Lau explains the importance of bringing culture to a community during her final presentation for the 2018 winter term. (Phillip Quinn/Emerald)

Once she found a way to articulate the problems she and her peers were facing, Lau took the fight for equity to the top of the School of Planning, Public Policy and Management. She met Rachel Mallinga, one of the only other women of color in the department, and the two began to work together.

“Ali is just one woman in the long history of women of color who’ve spoken up and done the hard work to push for change,” Mallinga, an alum of the nonprofit management program, said.

In 2015, Mallinga founded the Peer Exchange as a safe space for underrepresented students in PPPM to convene, share their experiences and support each other. Lau was inspired to voice her concerns about a lack of equity in the department and find a constructive way to create change from within.

After a group of students sent official letters to the PPPM department with requests for equity action and saw little change, Lau knew they needed a concrete framework to hold the department accountable.  The two women spent eight months interviewing students and compiling an official report that evaluated the department’s cultural competency from a student perspective and recommended specific changes to curriculums, classrooms and faculty.

“This ‘Cultural Competency Report’ provides key elements to establishing a culture of equity, diversity, and inclusion,” Mallinga and Lau wrote in its intro.

When Mallinga graduated last year, Lau took over as a facilitator of the Peer Exchange.

Because of Mallinga and Lau’s vocal leadership of the Peer Exchange and the official letters sent to the department head, Rich Margerum, the PPPM department formed an Equity Initiative of faculty and students to address the concerns.

“I think there’s a little bit of complacency that, oh, we’re all liberal-minded, open minded, and so forth, everything’s going fine — without really understanding where those perspectives are coming from,” Margerum said.

The initiative has used this report and hosted listening sessions to hear the perspectives of underrepresented students. For a graduate department that specializes in shaping cities and societies with policy, it’s essential to understand how applicable and integral these issues are and include them as a central part of the curriculum, according to Lau.

“You can count on your fingers how many students of color there are. You know that it’s small,” Lau said about PPPM.

Graduate school is already a stressful environment. Add the stress of being an underrepresented student and it becomes even worse, Lau said.

“When you’re one of a few women of color in a department, you’re dealing with a really different experience, and graduate school can be an unwelcoming environment” Mallinga said. “Just having that support — how to navigate around microaggressions is really important.”

Lau also sees Mallinga as a leader for social change. “Until I started working with her, one, I thought I was going crazy, and two, I just had no idea that you could actually do something about it,” Lau said.

Those around Lau in the department and in her life, like her partner and fellow PPPM student, Oliver Gaskell, consistently emphasized Lau’s ability as an agent for change on both structural and personal levels, despite all the other work she has to do.

Margerum described her as brave for confronting implicit bias within classrooms and holding the department accountable.

“She’s just done a really terrific job of being critical of things that fall short but also being very constructive and presenting in a way that faculty come away with a real positive, energized feeling about what they need to do and being convinced this is a priority,” Margerum said about Lau’s work.

Lau and Mallinga aren’t the only students who’ve felt burdened by a culture of whiteness at UO.

“Eugene’s pretty ethnically homogeneous, so when you first move here you can feel really othered to a whole different extent than probably where you’re moving from,” Jaclyn Kellon, a Ph.D candidate in chemistry and the president and founder of student support group Community for Minorities in STEM, said.

Kellon reached out to Lau last summer when starting a program for grad students called Creating Connections. “Our goal is to create a larger social network and social support system that can help students from underrepresented minority populations connect and feel a sense of belonging at the university,” Kellon said.

Lau is in her last six of months of school and has moved her focus from the PPPM’s Equity Initiative to helping Kellon kickstart the broader program.

She wants to leave behind a growing community and support system for future graduate students of color.

But the department still has a long way to go and things are moving slowly, according to Lau.

“People who are in positions of power, namely white, cisgendered men and women should listen to women of color,” Mallinga said. “Throughout history we’ve spoken our truths and this is what Ali has done. She’s going to be an agent of change.”